We have done tons of crafts and painting lately so we decided to switch it up this week and do some other activities after reading “Red Light, Green Light” by Anastasia Suen. My son had a bug this week and had a fever for several days and I am sooooo glad he is finally feeling better today! 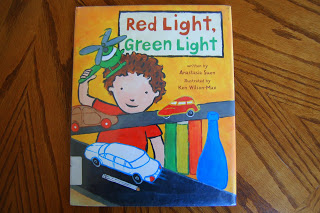 This is a fun book about a little boy playing and talks about different types of vehicles, roads and obviously the meaning of the red light and green light. It was a very simple book and it was fun to look through the pages and find different things that were out of place like a pencil used for the white lines in the road, etc.

After reading the book we started by making a stop light out of construction paper. I traced a cereal bowl onto a piece of red, yellow and green construction paper, and then my son cut them out. He hates cutting circles, so this was perfect practice for him. hee hee We then glued together two pieces of black paper lengthwise and glued the circles onto it in the correct order. 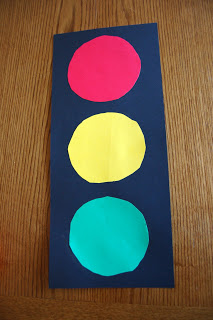 After discussing what each color meant on the stop light, we got out some objects we had that were red, yellow and green to do some sorting. We started with blocks. After they were all sorted, I had mt son estimate which circle he thought had the most blocks on it and which had the least. Then he counted them to see if he was correct. 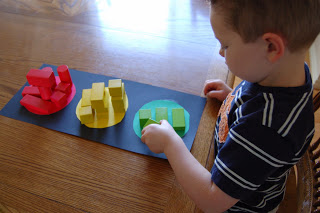 Then we sorted legos. Before we started the activity I gathered a couple handfuls of red, yellow and green legos and put them in a bowl. 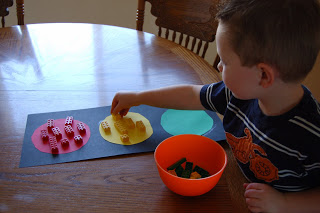 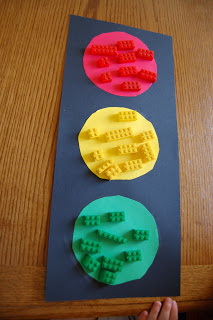 I thought it would be fun to introduce using a chart with my son so I made this quick one on Microsoft Word before we started this activity. As we counted the legos, I had him color a rectangle for each lego in the appropriate column. 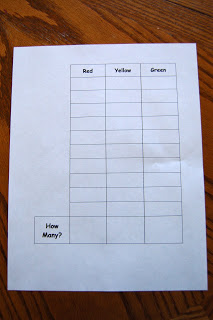 When we were all done coloring, we counted how many there were of each and wrote that number in the space at the bottom of the chart. 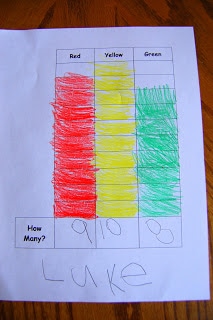 Estimating was a little hard for my son on this round because I made sure to make the amounts only 1 apart from each other. I thought this was a great way to start to introduce using charts and graphs with my preschooler and he really it.

I also made this simple chart so we could practice making patterns with the legos. 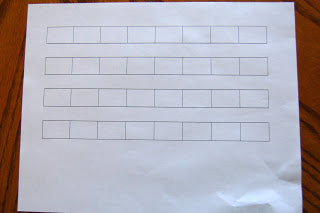 I started the first pattern by placing down red, green, red, green and then asked him to continue the pattern to the end of the row. He grasped the concept very quickly and came up with the next two patterns by himself. Then on the last row I had him use all three colors of the stop light. 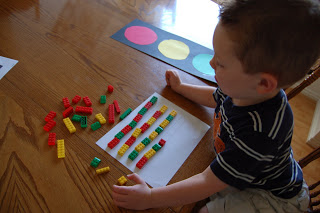 This is how it looked when we were finished. This was a big hit for my son! I didn’t know he enjoyed patterns so much so we will definitely be doing more stuff like this in the future. 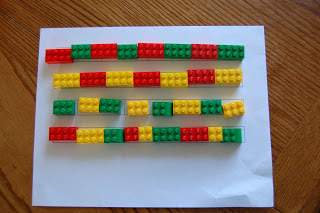 To go along with the theme of the book, I printed off letter highway print-outs for us to race some cars on for letter and name writing practice. You can print them out HERE. I mixed the pages up and had my son put the letters in the correct order all by himself.

Then we used a small car and traced all the letters just how he would write them. You can see the smile on his face in this picture. What kid doesn’t like racing a car along a track? These printables are absolutely fabulous and I am so happy to have found them. I plan on printing out his middle and last name too so he can practice it this way. 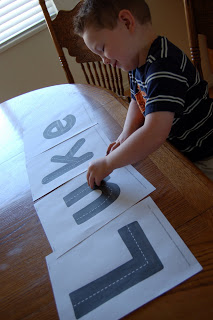 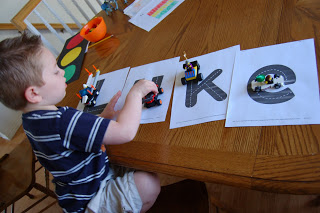 All of these activities took up a couple hours but you could spread them out for a couple days. 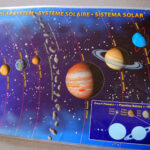 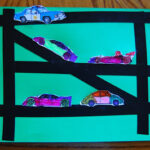