Sharks are some of the most fascinating creatures under the sea. They come in all shapes and sizes, in fact, there are over 500 species of shark. These massive, sharp-toothed creatures might seem scary, sharks don’t really want to eat people. They are much more interested in fish and other marine life.

Shark’s scary and dangerous reputation probably comes more from popular scary movies featuring these creatures, like Jaws and The Shallows. Sharks have become incredibly prevalent in pop culture throughout the years.

The diversity and fascinating nature of sharks make them a great subject for shark coloring pages that you can download and enjoy.

So without further ado, here are 25 all-new and completely free shark coloring pages. Have fun coloring these fascinating creatures.

The shark in this coloring page grins, showing gleaming super sharp teeth. Sharks have rows and rows of teeth in their mouths that they are frequently shedding and replacing with new ones. Some sharks can have up to 300 teeth at a time. 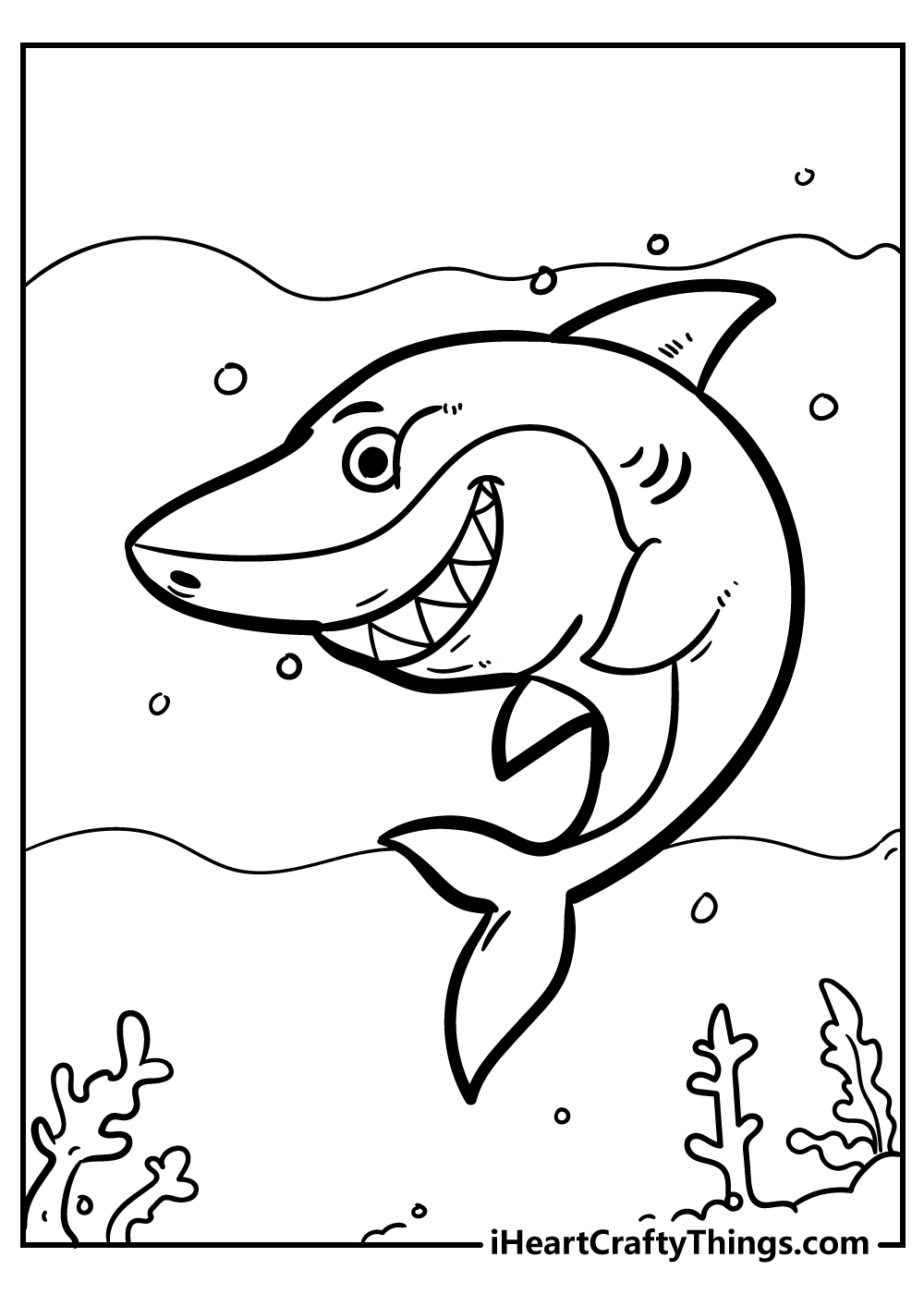 This shark floats above a coral reef and grins up at a bunch of tiny fish swimming above. A bigger shark’s favorite thing to eat is fish like tuna, mackerel, and salmon. Those fish had better get moving before the shark spots them. 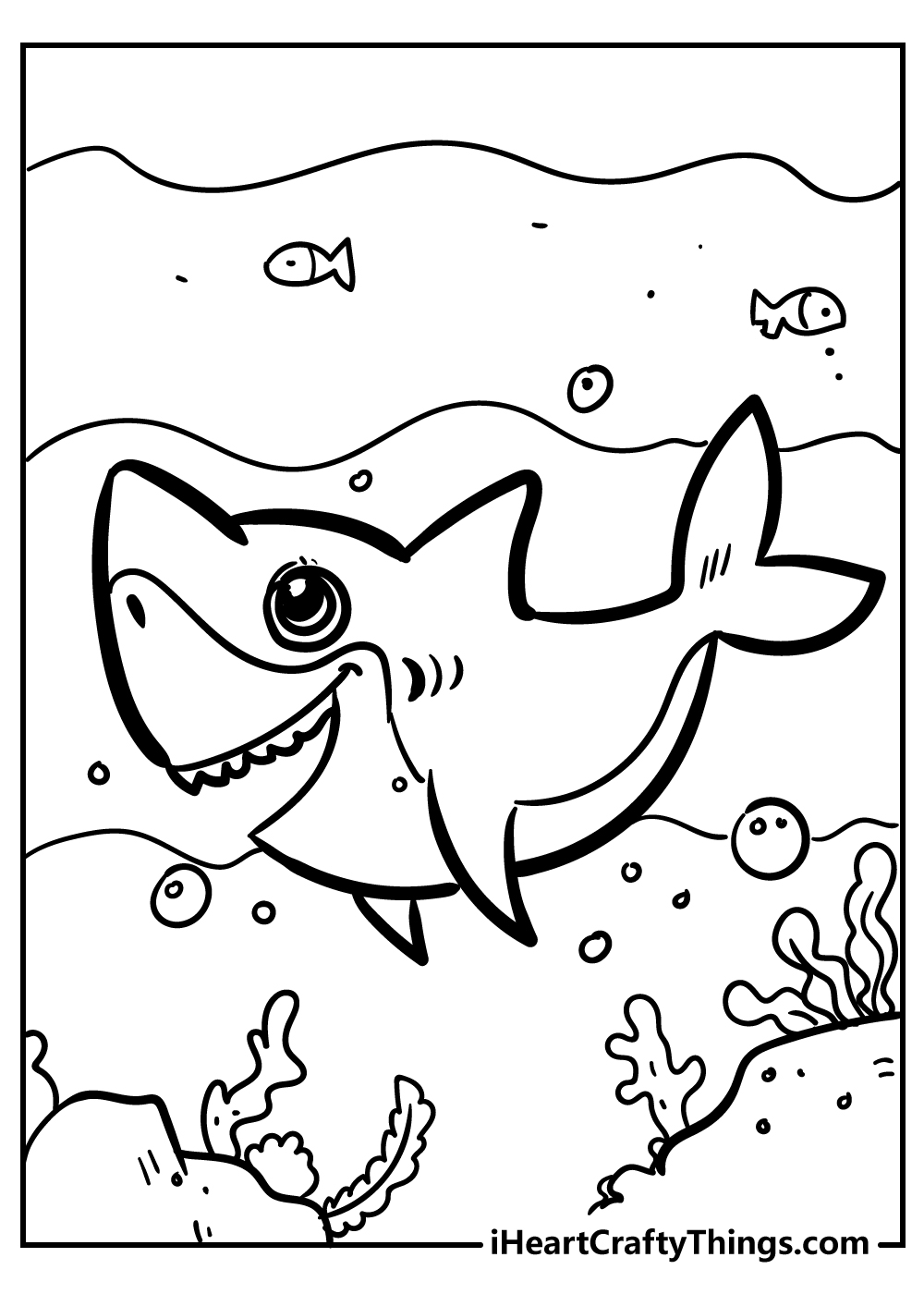 Sharks are some of the most powerful creatures in the sea. We love the creativity of this printable sheet showing a shark proudly holding a trident under the sea. Tridents are associated with rulers of the sea in classic mythology. 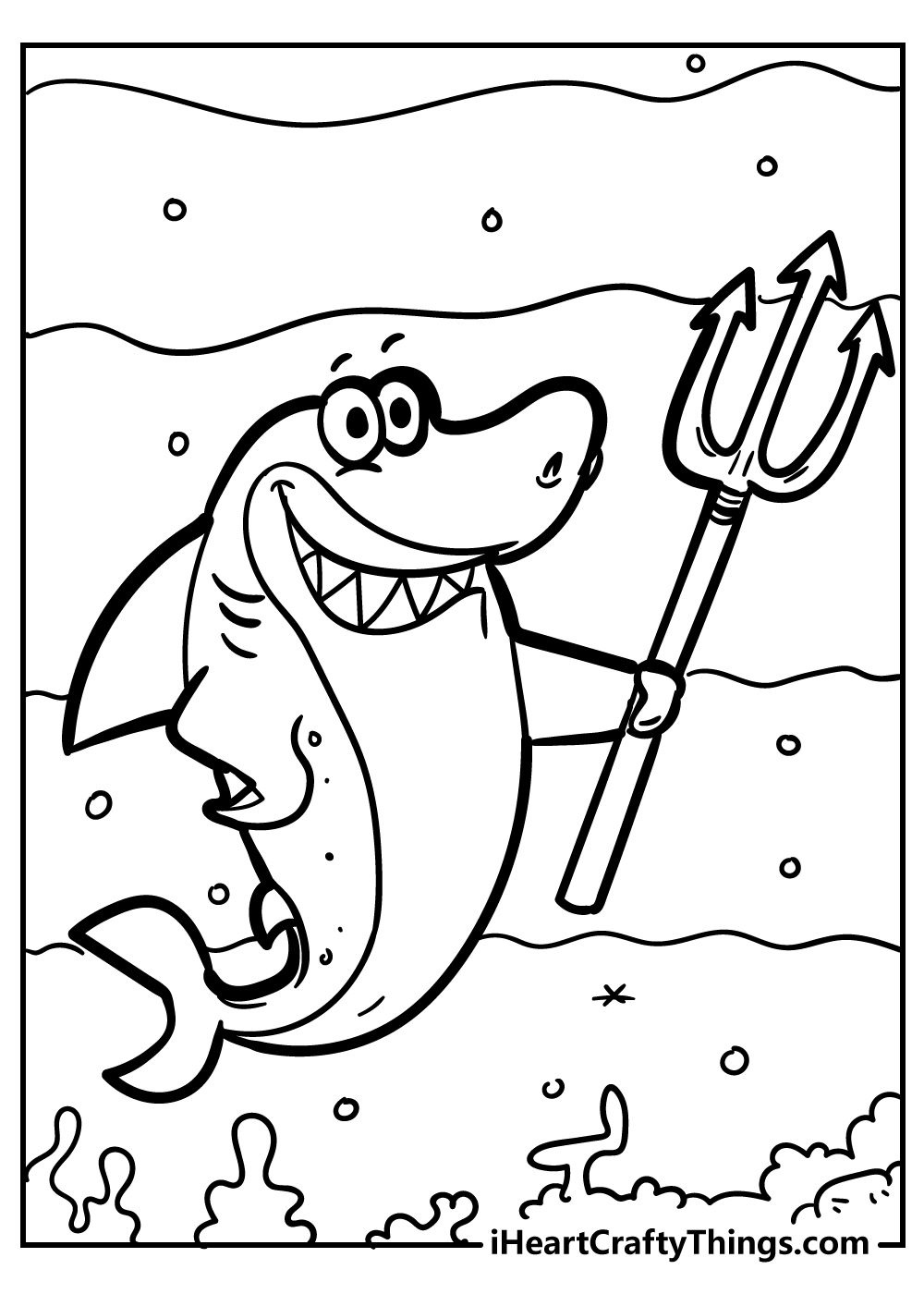 This shark has hopped on a surfboard on top of the water. He looks like he has some pretty good moves as he tries his hand at surfing. The shark waves at someone nearby. He is probably a startling sight to see for the other surfers. 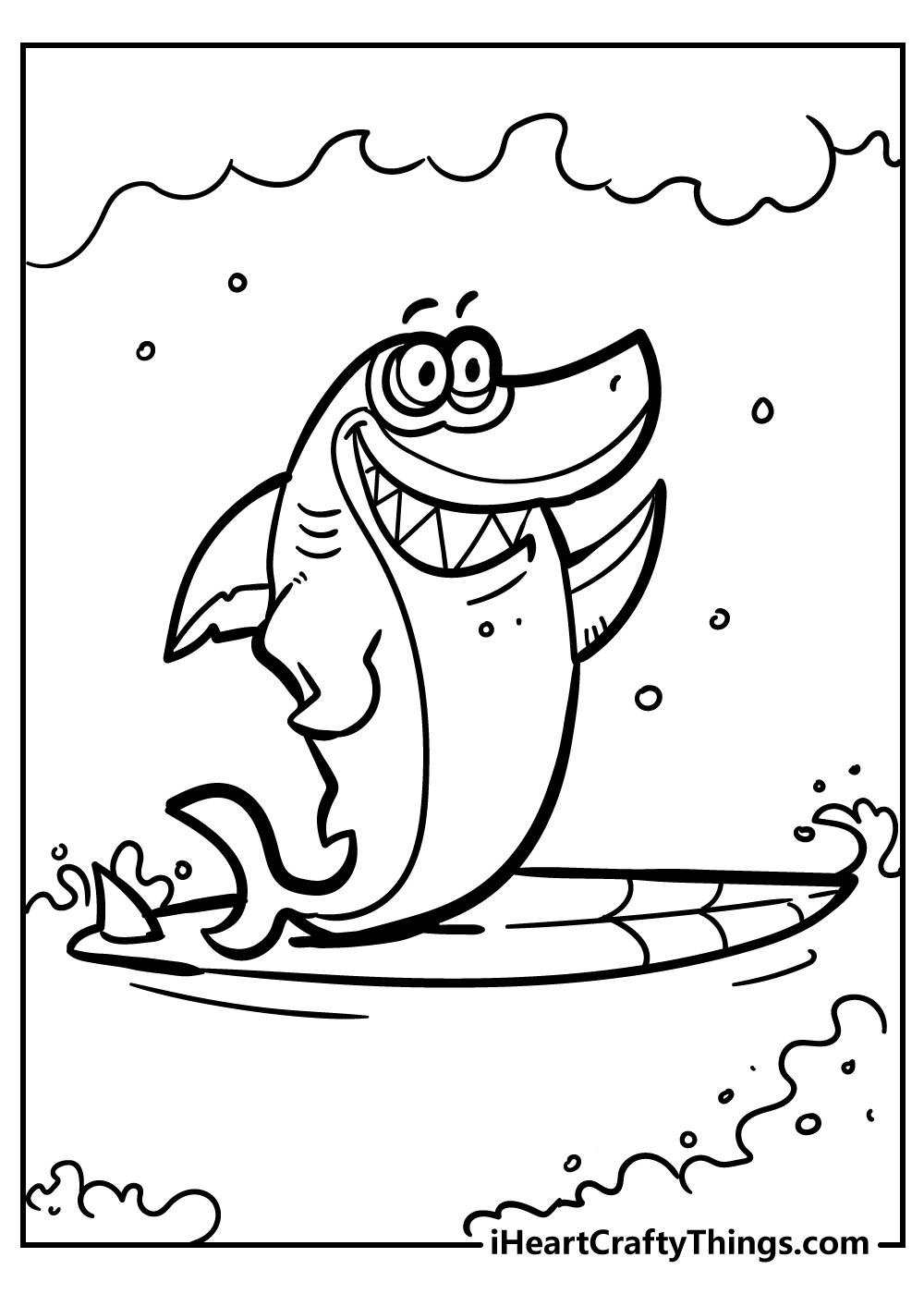 We’re a little scared of the shark in this coloring sheet. It has a very big body and grins at us with sharp teeth. Perhaps it is a Great White! These sharks get their name from their distinctive white underbellies. They are some of the most dangerous sharks around. 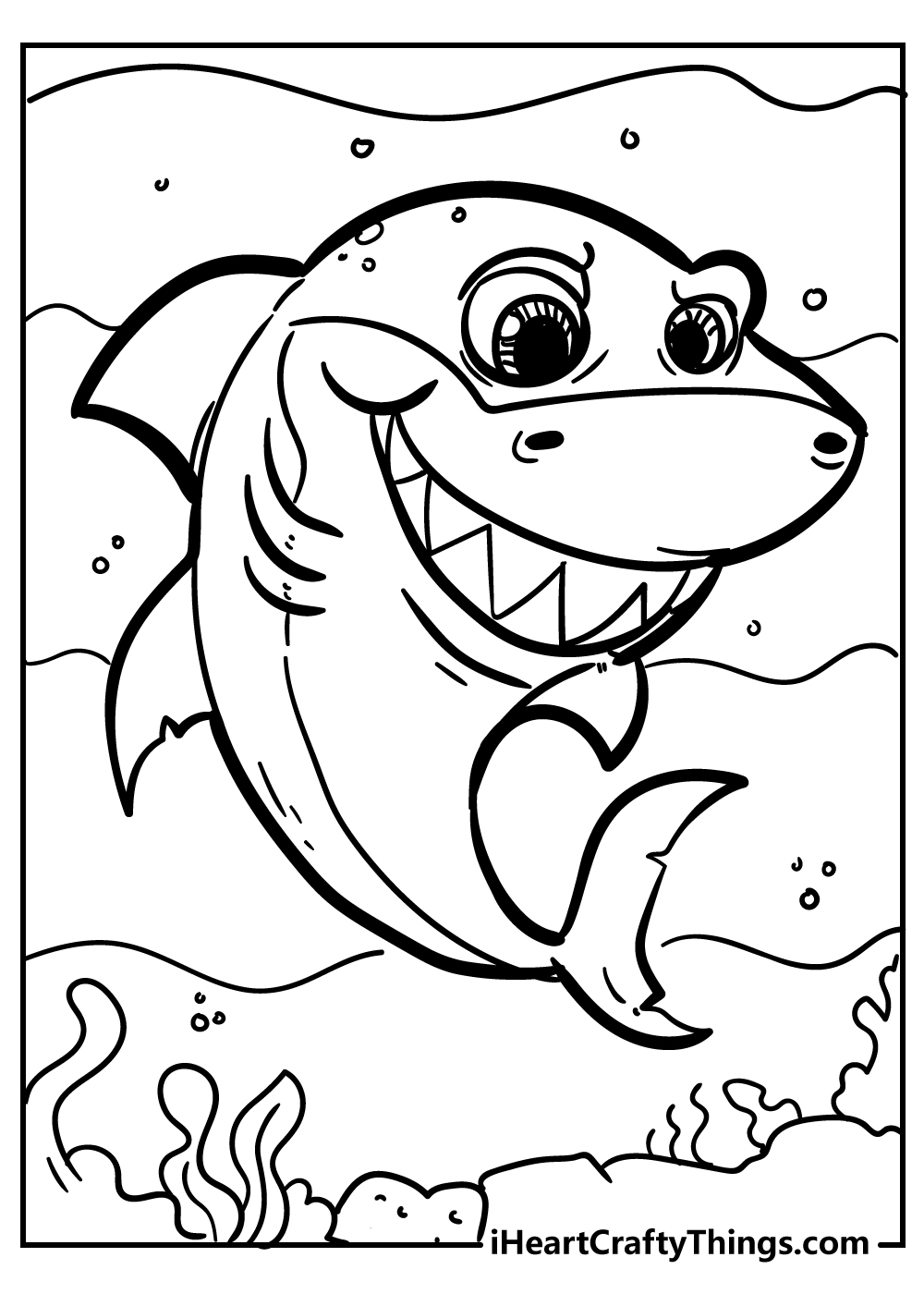 The friendly sharks in this coloring page look like they might be whale sharks. They smile and float around each other in the ocean. Even though whale sharks are the biggest sharks around, they are not dangerous to humans at all. They open their enormous mouths to filter feed on small fish only. 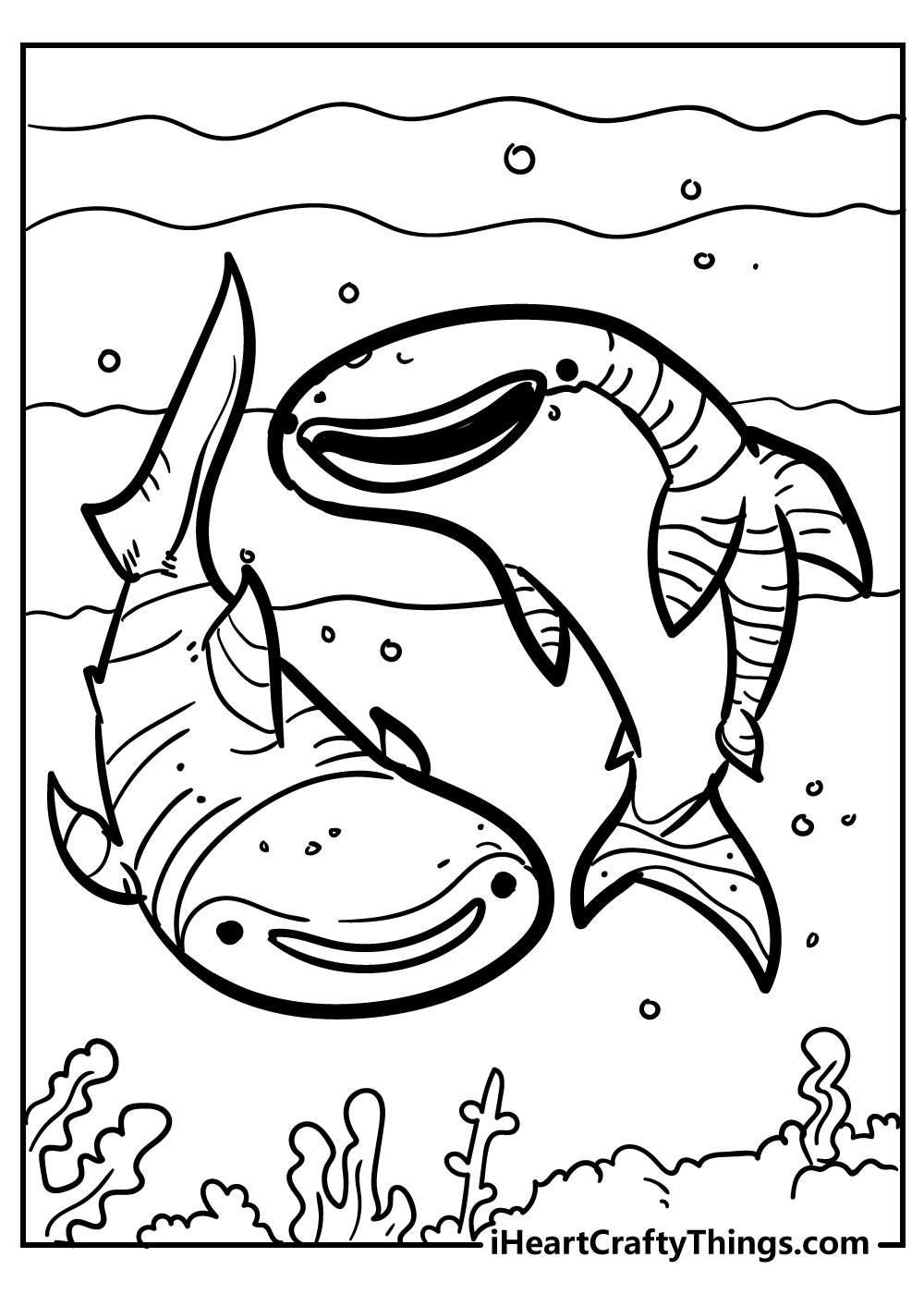 There are so many interesting and exciting shark coloring pages for you to enjoy. Remember that they are all completely free to print, so you can print and color as many as you want. Use your imagination and have fun! 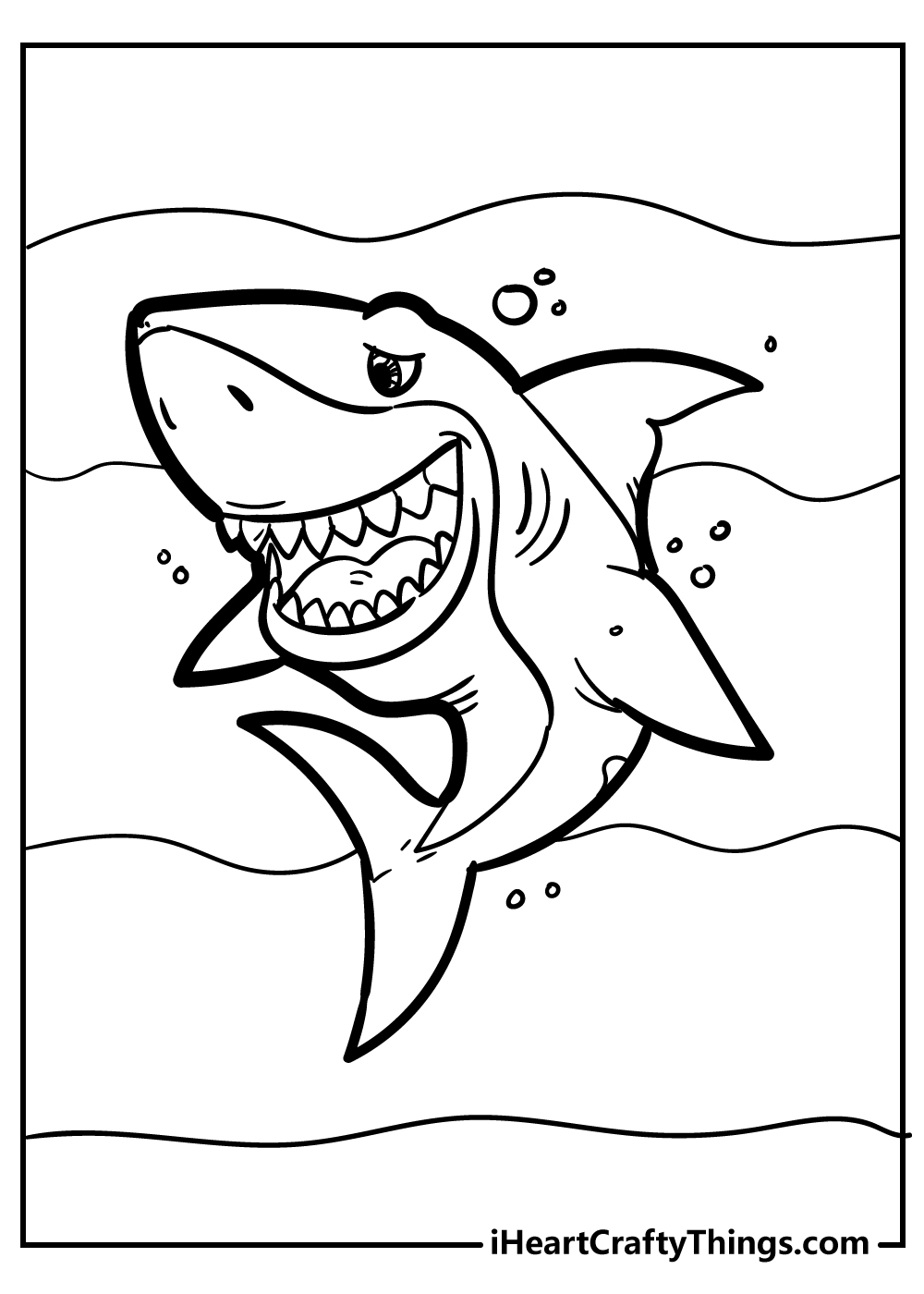 Sometimes sharks make friends under the seas, like in this coloring sheet. A large shark talks with a little striped fish. He reminds us of the vegetarian sharks in Finding Nemo. He’s probably saying, “Fish are friends, not food.” 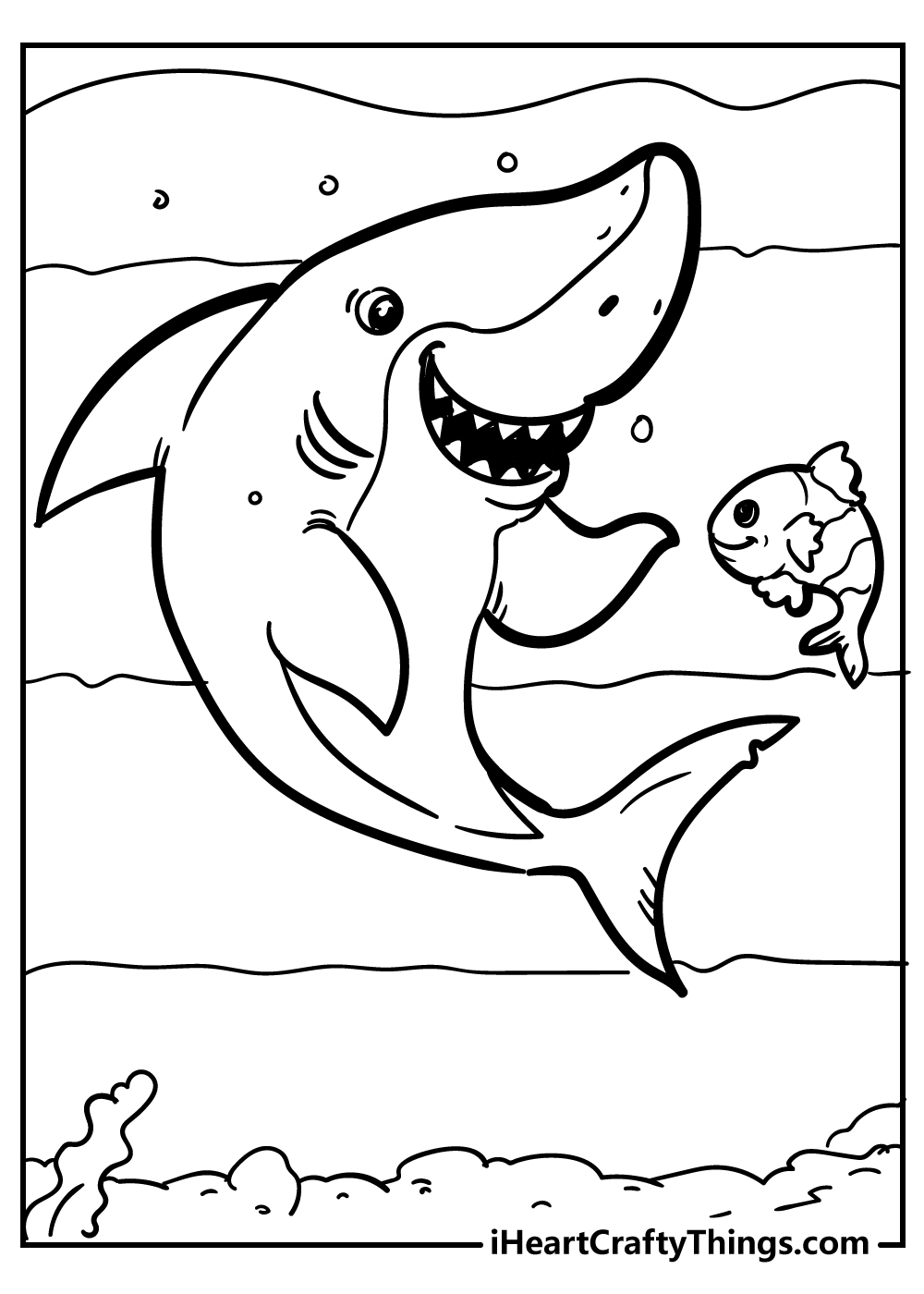 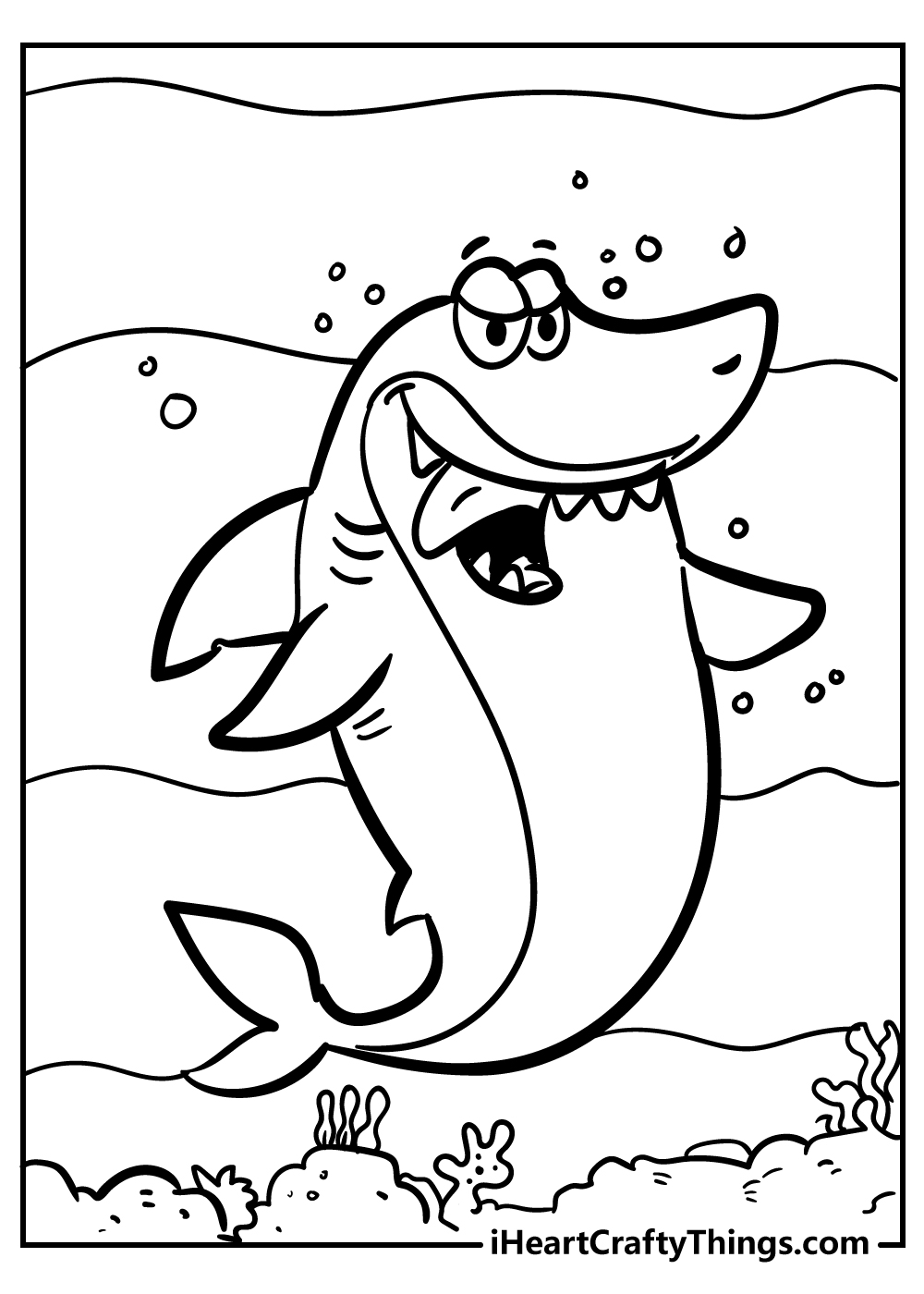 This shark coloring sheet shows a creature that might be aggressive. This shark could be a bull shark, which is sometimes considered to be the most dangerous sharks to humans, especially because they prefer shallow waters. But keep in mind that shark attacks on humans are still extremely rare. 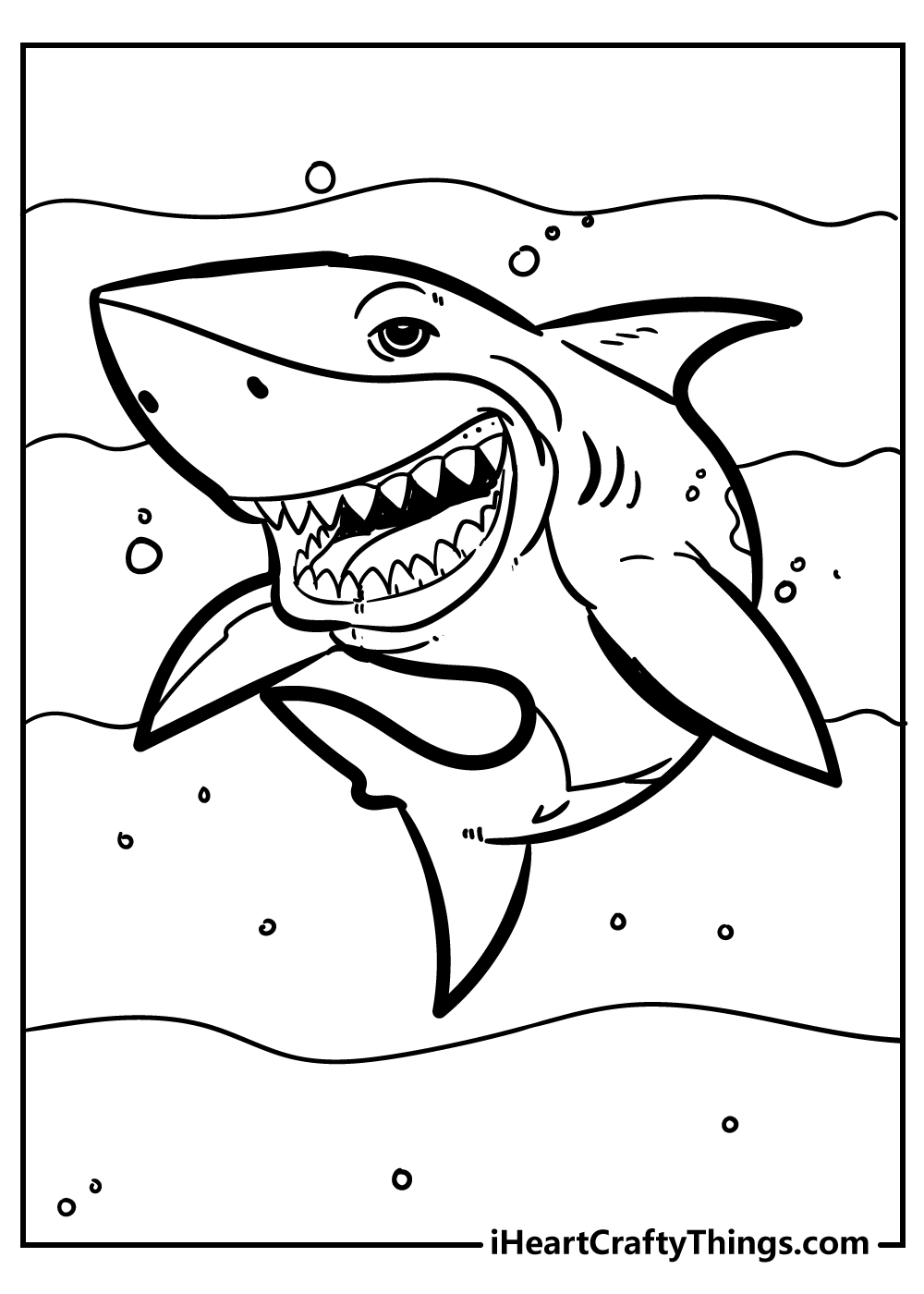 This funny shark balances on his tail to stand up. Did you know that sharks don’t actually have bones? Their bodies are actually made up of cartilage, like the stuff that makes up your ear. Sharks’ skeletal cartilage can still form fossils though. 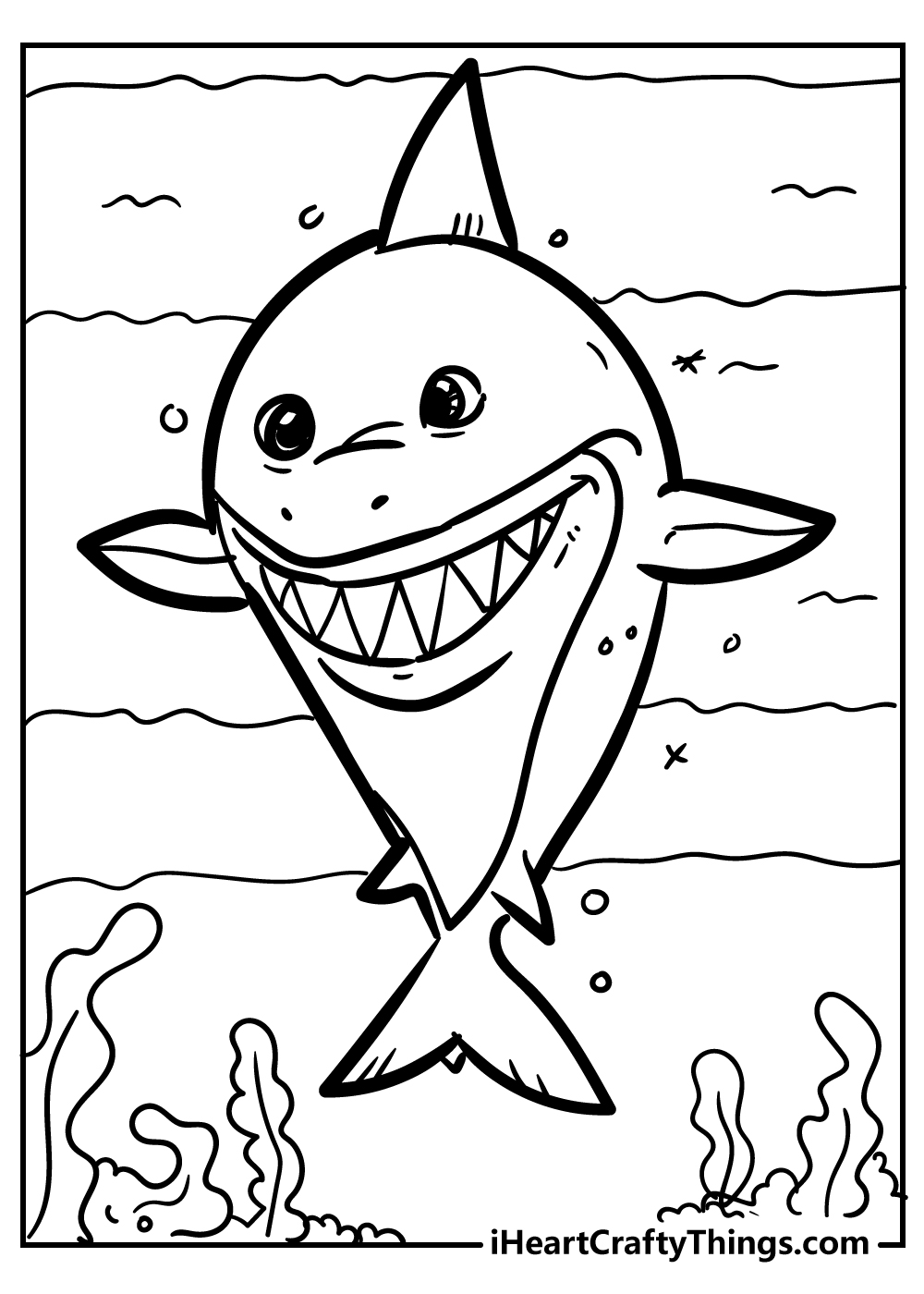 Despite their scary reputation, sharks are graceful and beautiful creatures. The shark in this free printable swims gracefully through the water. In fact, there is even a species of shark called the Graceful Shark. 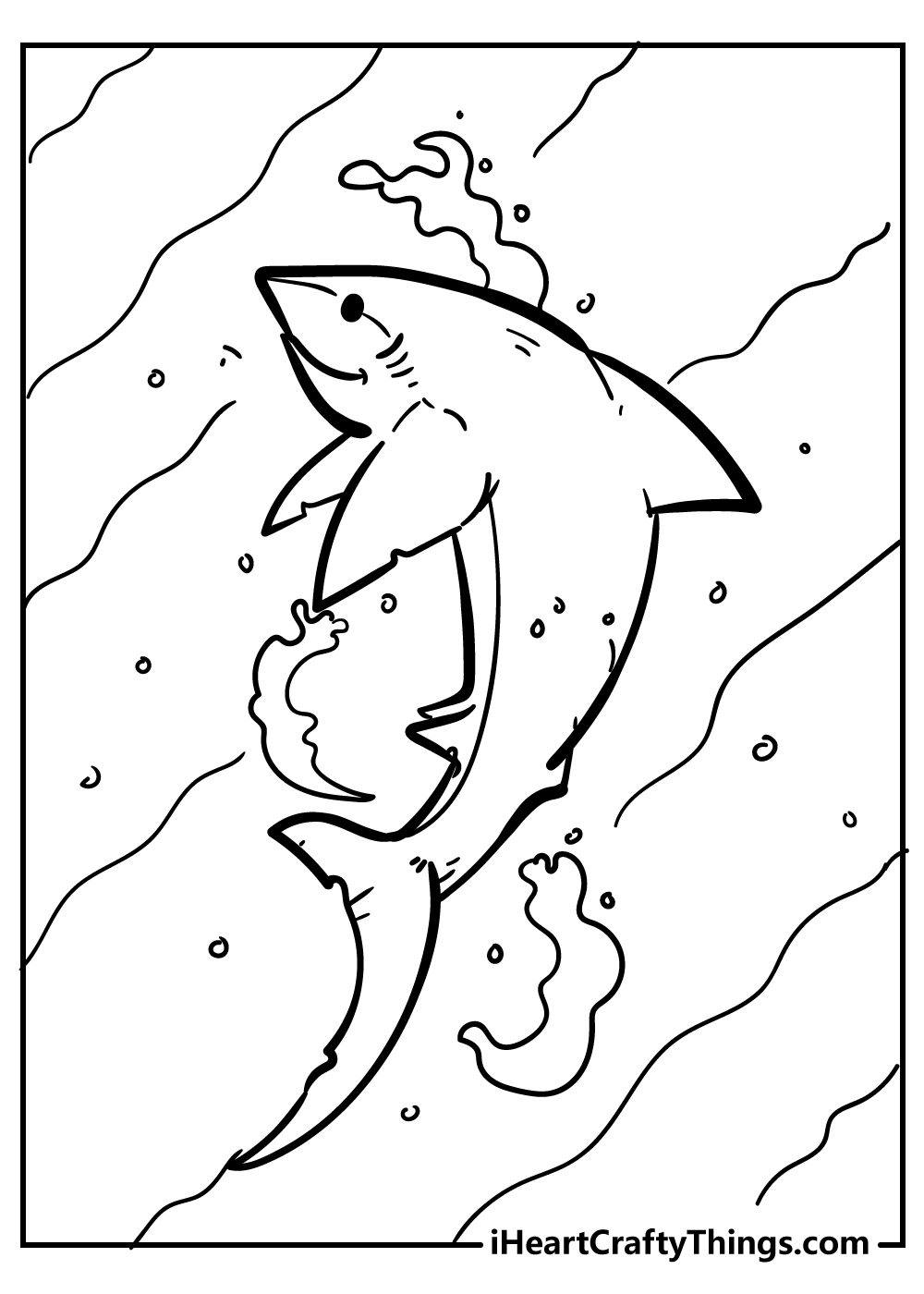 The shark in this coloring sheet for kids looks like a hammerhead, one of the most distinctive-looking sharks around. Hammerheads have flattened, long heads in the shape of a hammer, which is how they got their special name. 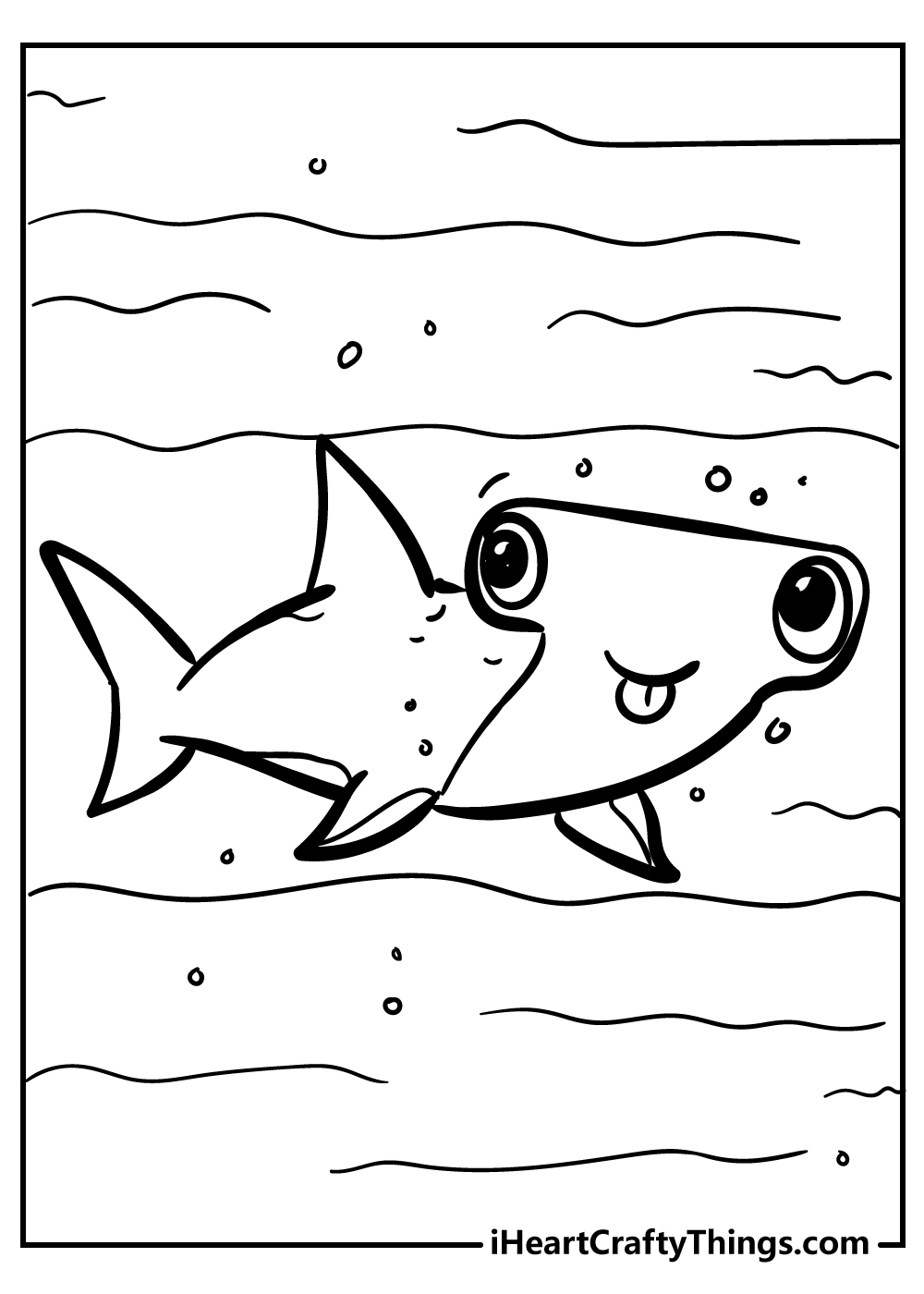 We can’t get enough of this adorable coloring page of a shark holding a delicious hamburger. How do you think he got his fins on this tasty treat? 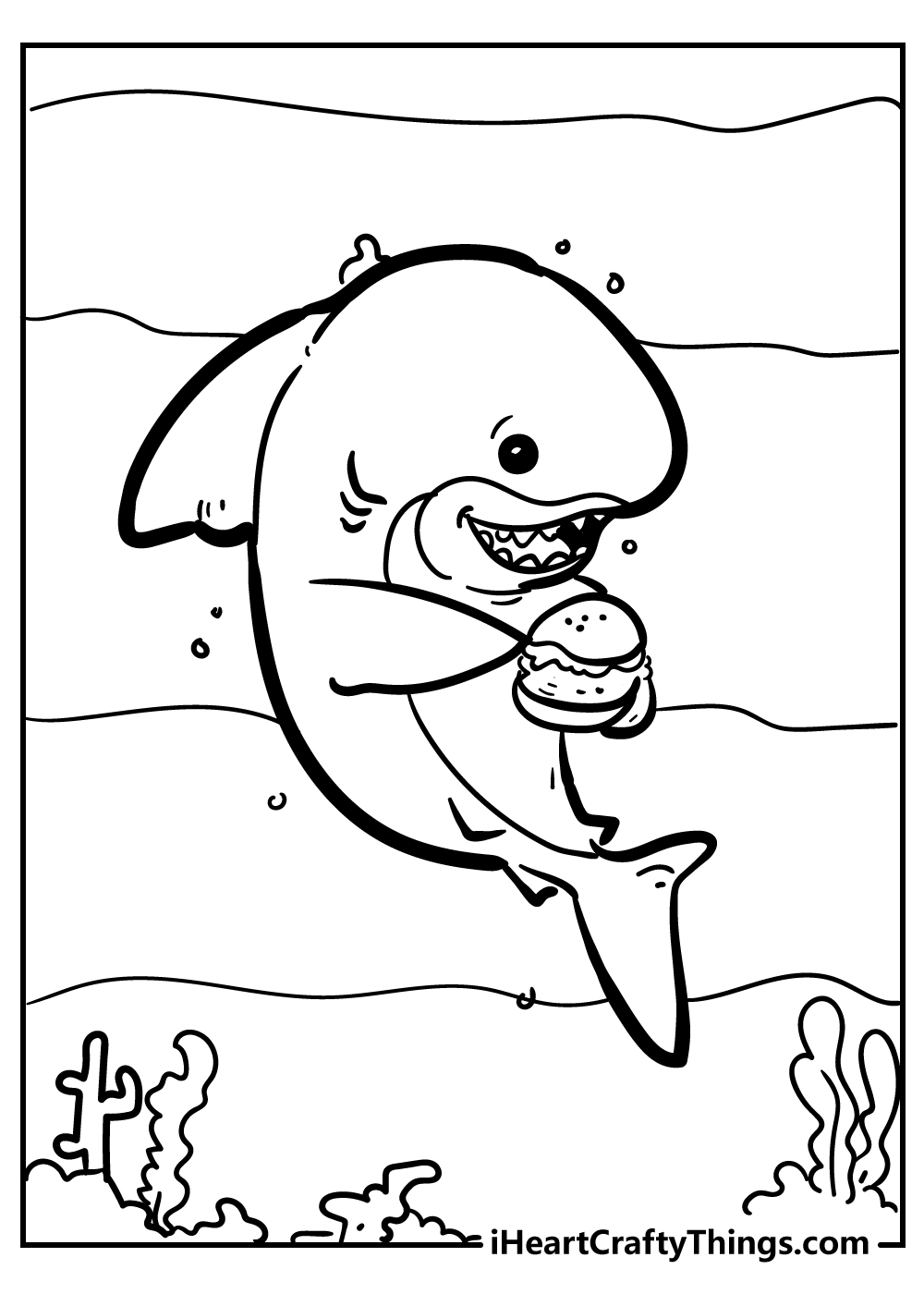 This interesting coloring page shows two different species of sharks meeting each other. It looks like they might be in some kind of serious conversation, or maybe they are just checking each other’s teeth. Sharks aren’t thought of as affectionate creatures, but some research suggests that they can be friends with each other. 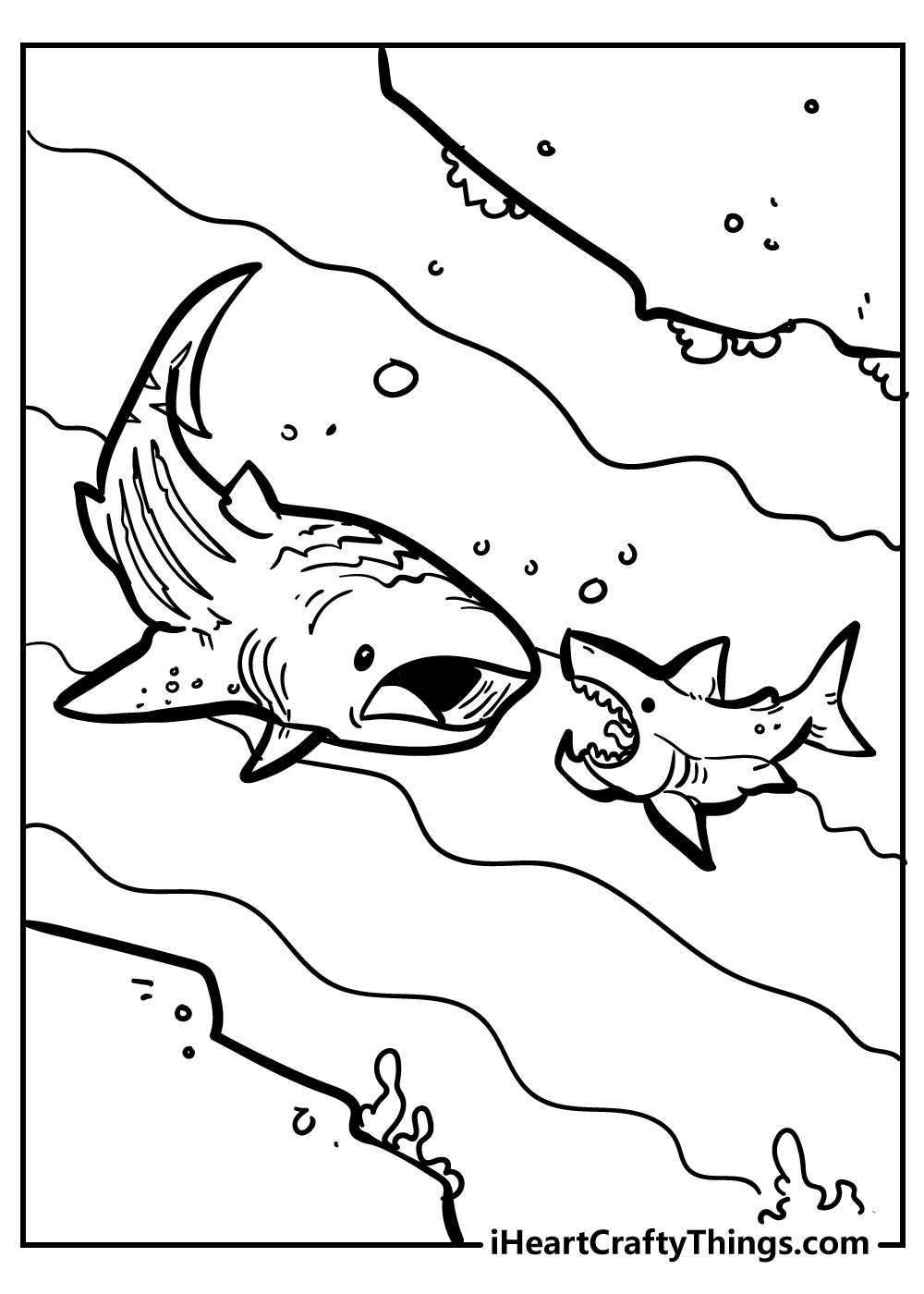 This beautiful sleek shark leaps out of the water into the sky. Some species of shark, like the mako shark, have been known to jump up to 20 feet in the air. Great whites also jump sometimes to catch prey. 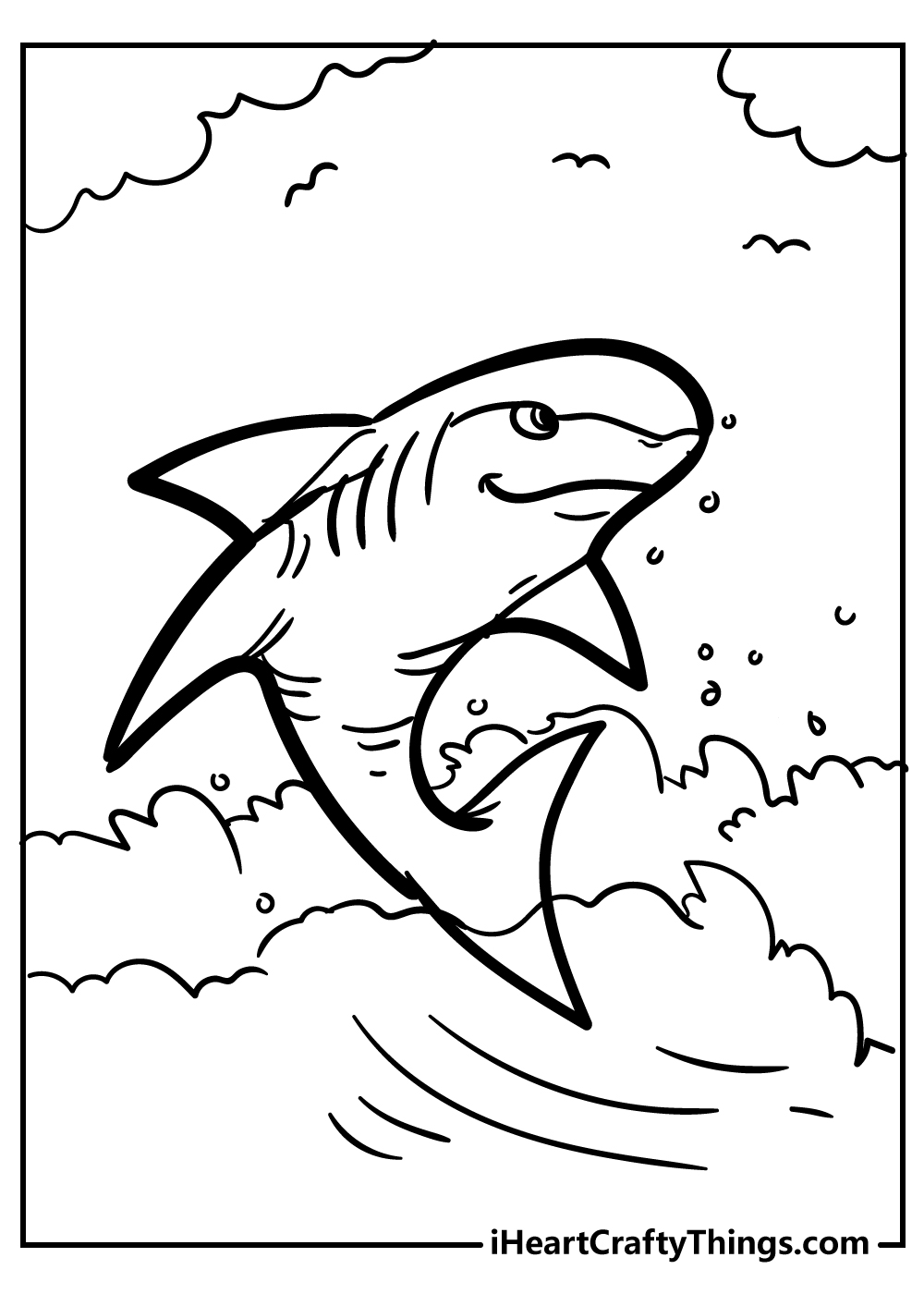 When you finish your shark coloring pages, don’t forget to post your finished masterpiece on our Facebook page. Every month we pick the best uploads and the winner gets a special prize! 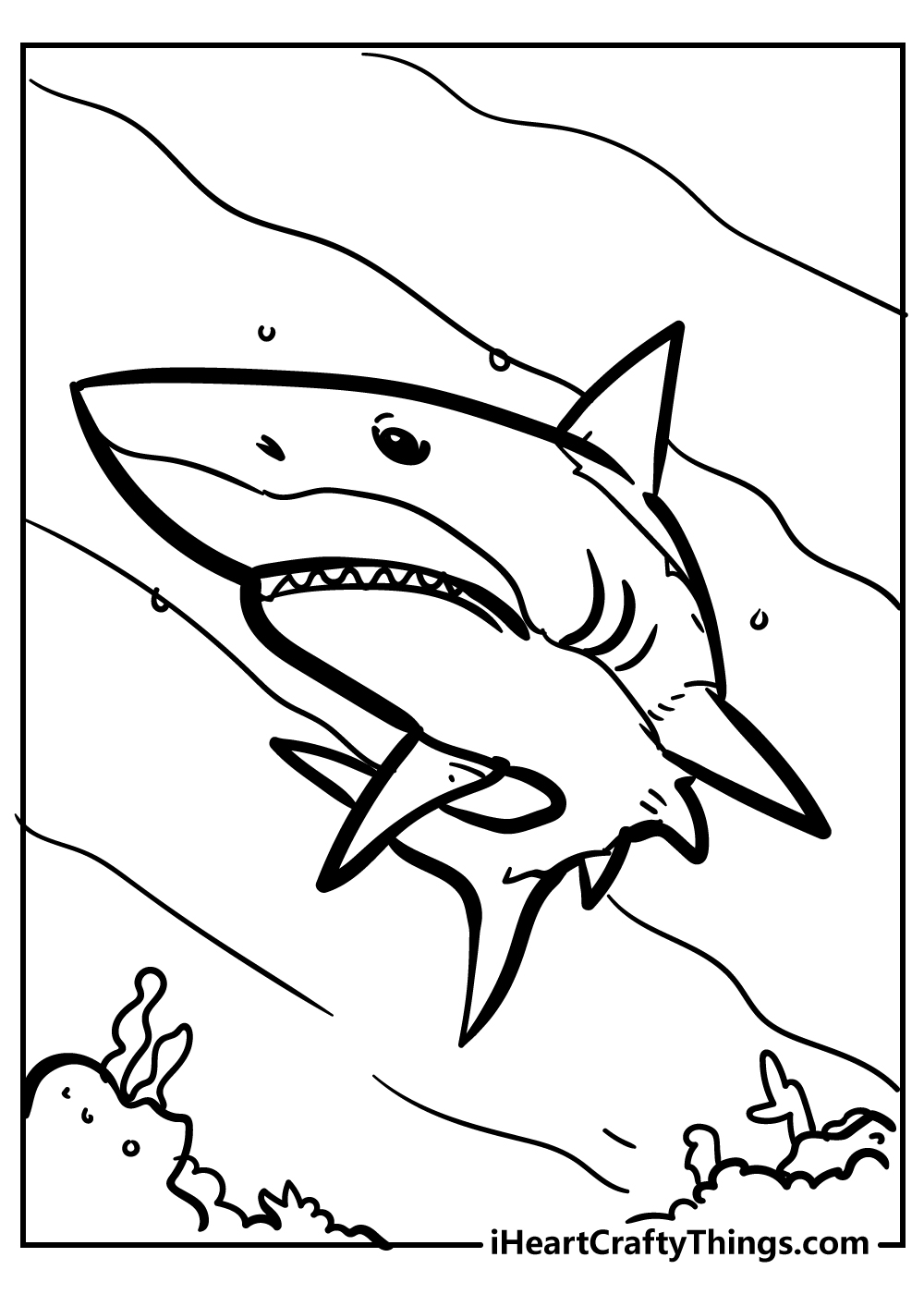 Sharks enjoy swimming in all types of climates and the shark in this coloring page is all smiles in his ocean habitat. Sharks can also live under Arctic ice, in coral reefs and some even live in freshwater. 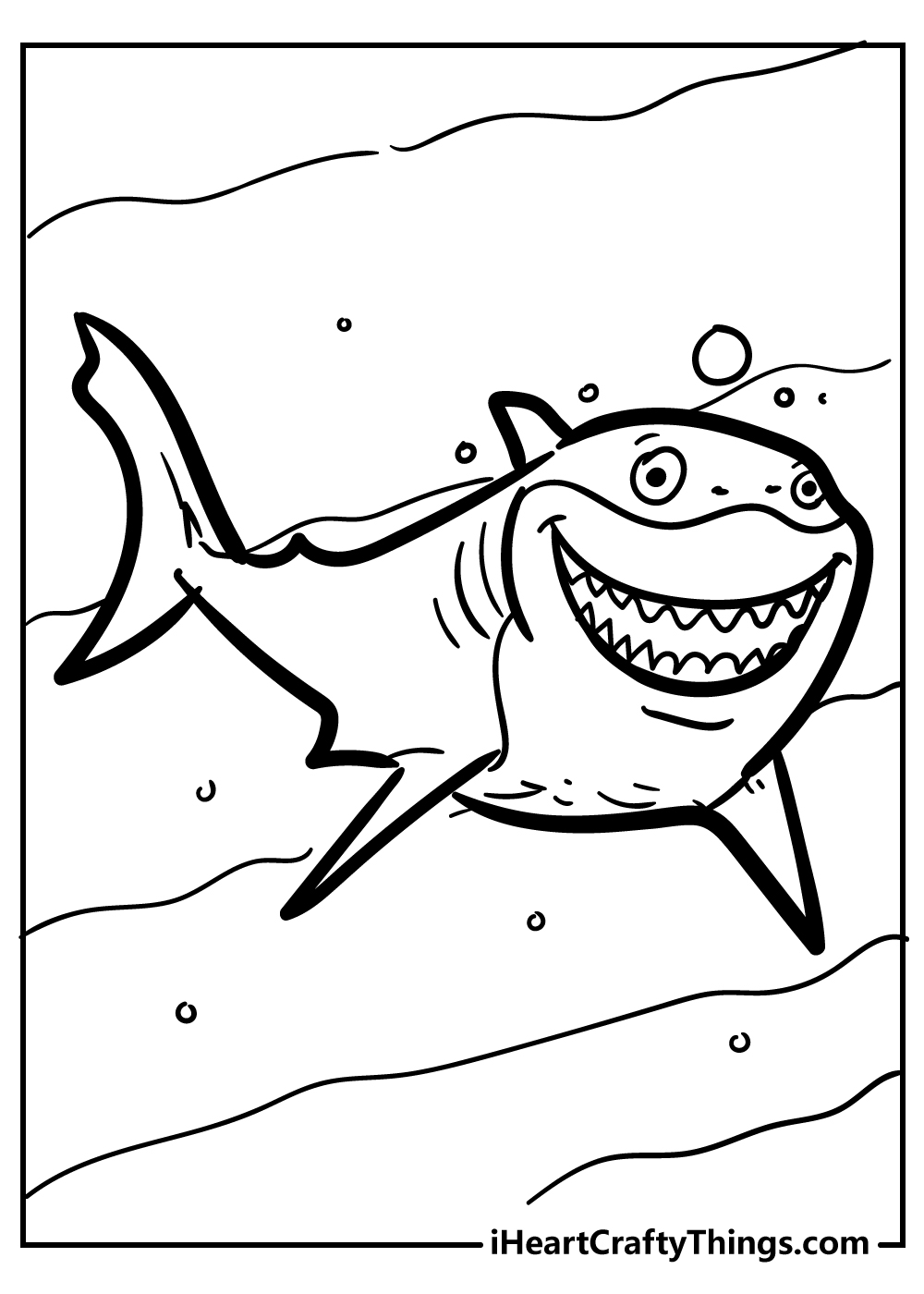 This shark has taken a chunk out of a surfboard! There are so many species of shark, and most of them are not dangerous to surfers at all. In fact, the vast majority of shark attacks on humans come from only three species – the bull, tiger, and great white sharks. 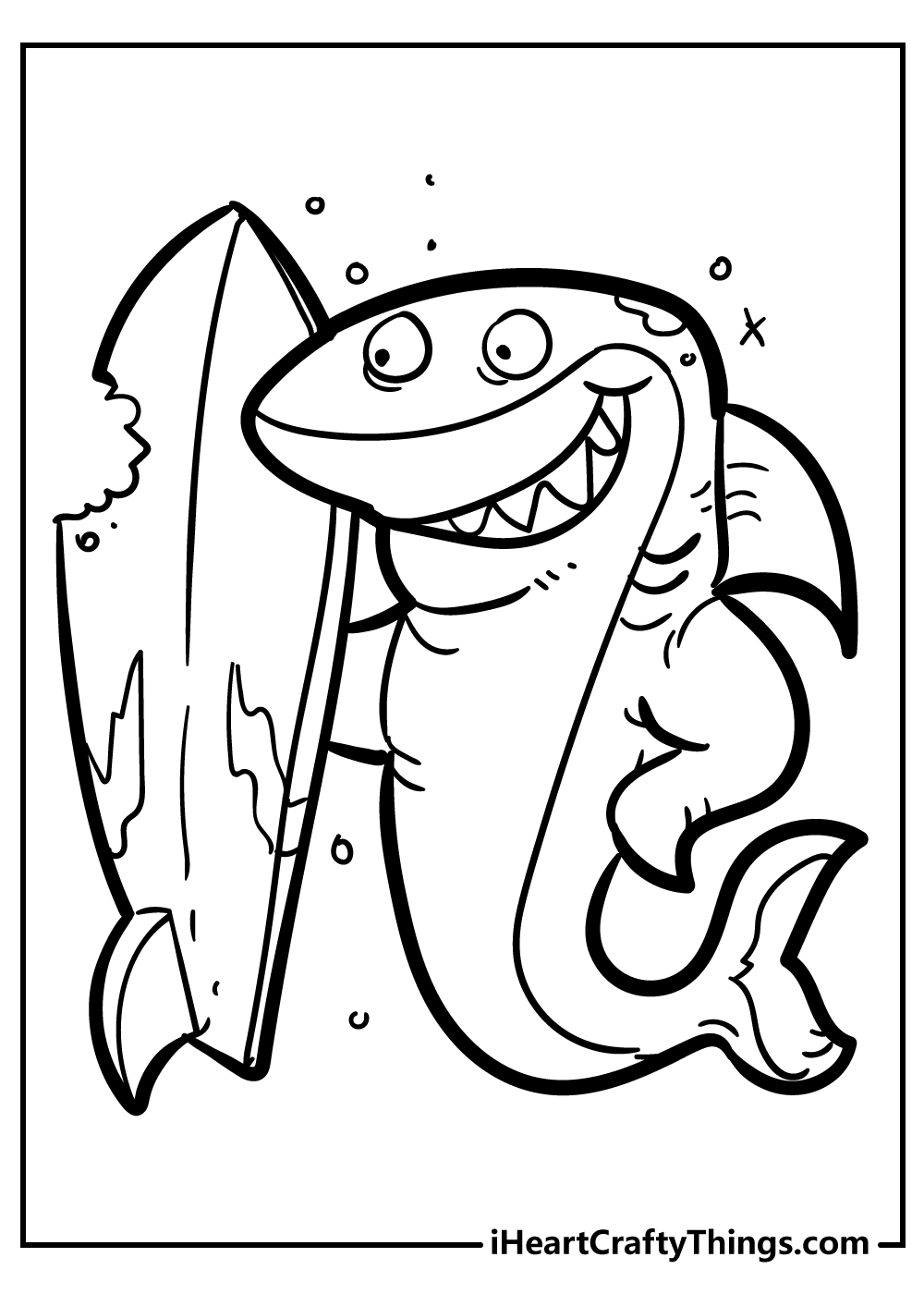 Hammerheads’ distinctive head shape has its benefits. They have superior depth perception and could have up to a 360-degree field of vision. Their heads are also helpful when hunting one of their favorite foods – stingrays! 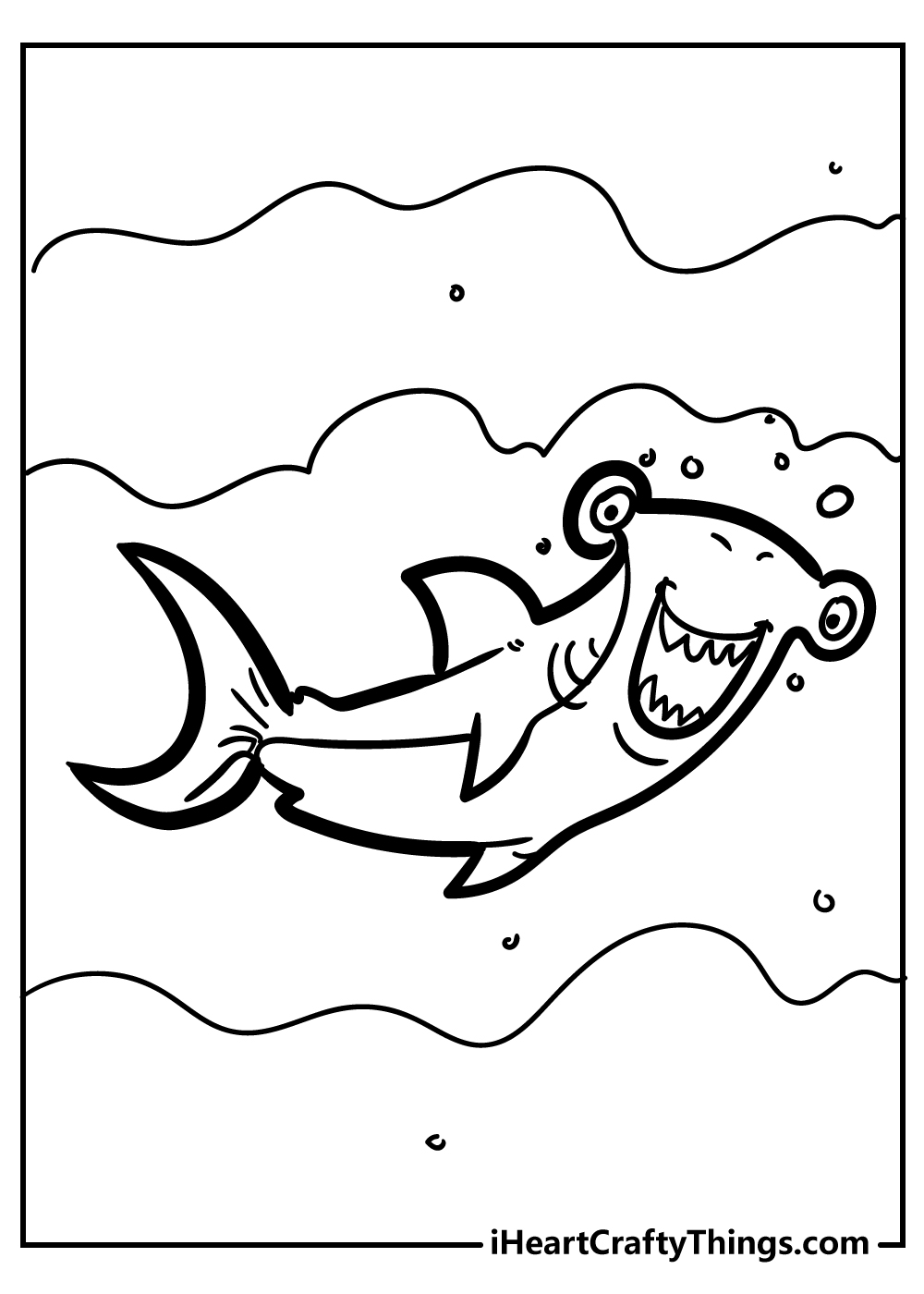 The shark in this printable looks like he is going a little wild. He opens his mouth wide revealing huge sharp teeth. Despite their reputation, there are many docile types of sharks in the ocean. Some species don’t even mind having humans swim near them. 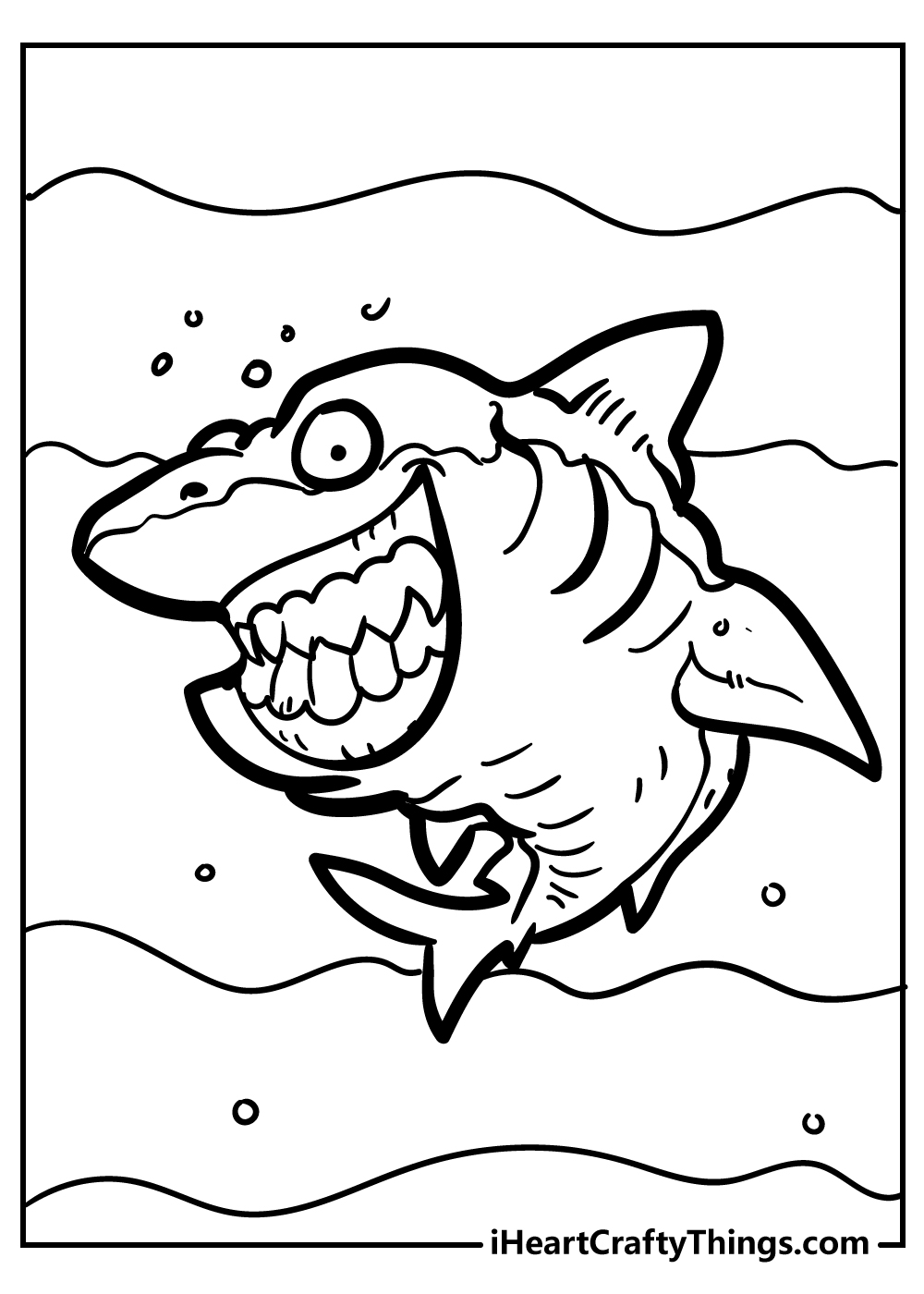 Did you know that sharks are ancient creatures? It is thought that sharks have been swimming around in the ocean for millions of years. Perhaps you’ve heard of the Megalodon, an enormous extinct species of shark that disappeared from the ocean a very long time ago. 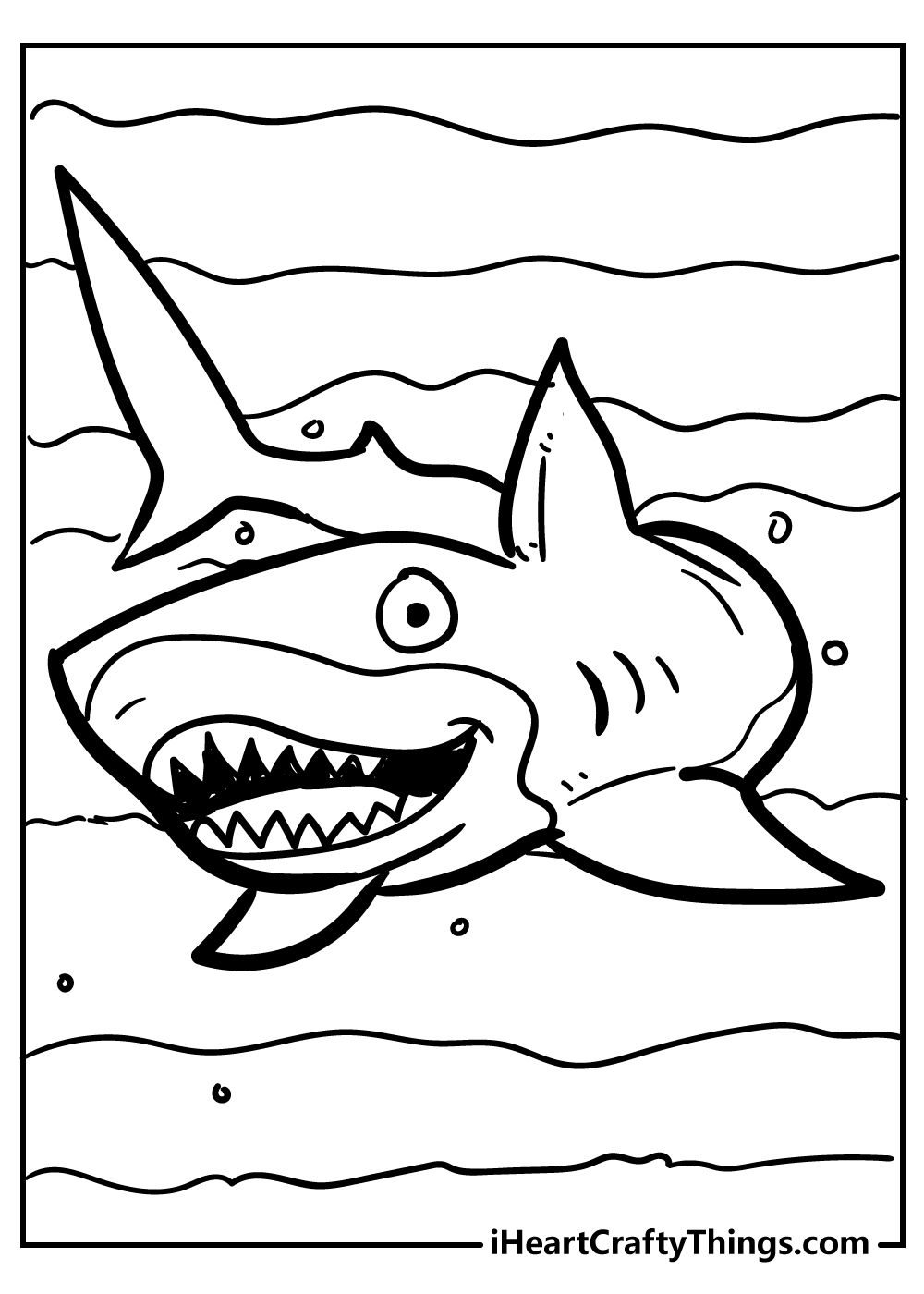 Sharks come in all shapes and sizes. The one in this coloring sheet is small and round, with little eyes and sharp teeth. The smallest shark in the world is called the Dwarf Lanternshark, and it could fit in the palm of our hand. 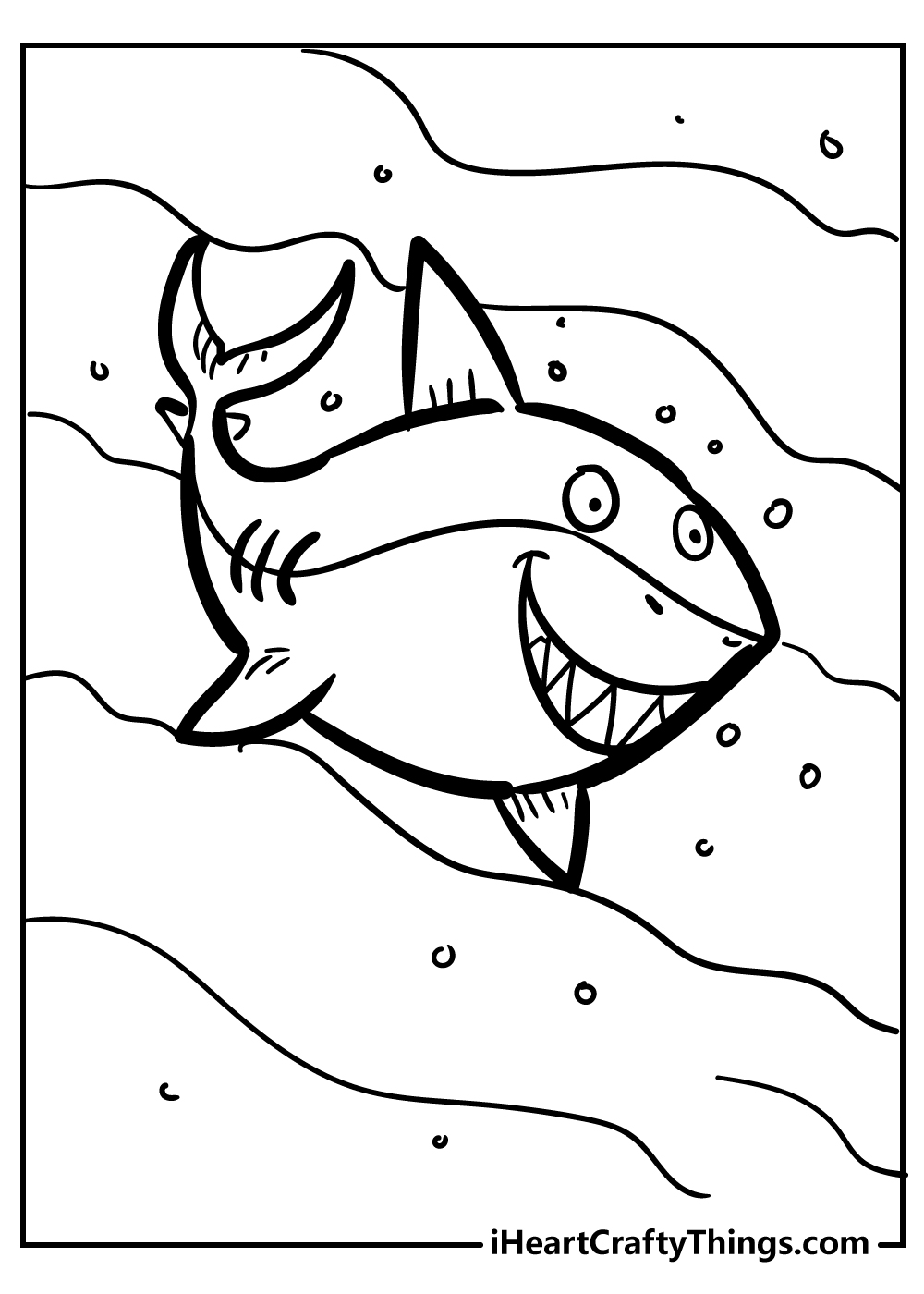 This shark glides easily through the water at greats speed. Some shark species are pretty fast. The Shortfin Mako Shark can reach speeds of 45 miles per hour. That’s much faster than humans can swim. 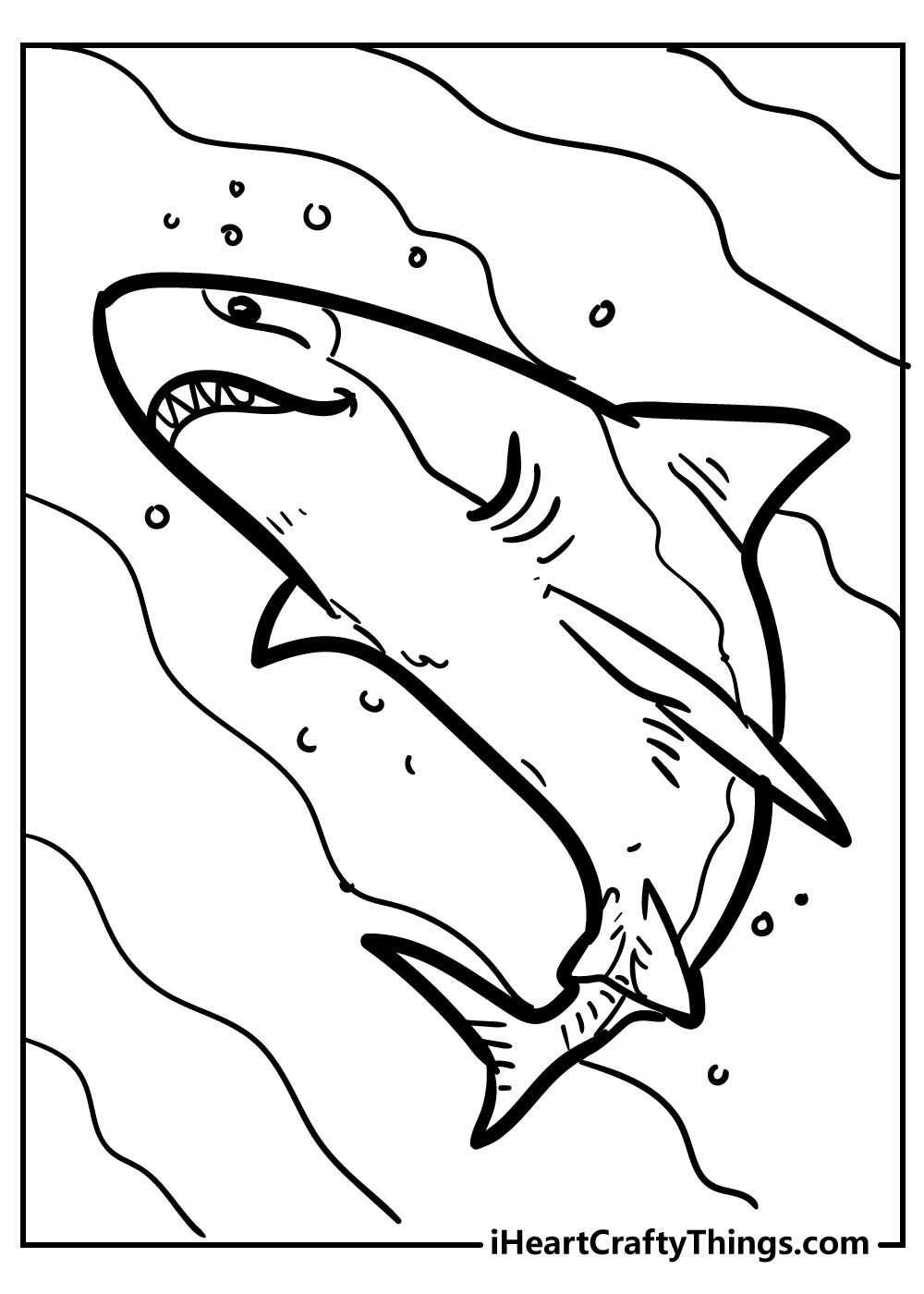 Some people absolutely love sharks. They are extremely interesting and fascinating creatures and some people’s favorite animal is a shark. The Discovery Channel even hosts a celebration of these animals with shark-themed shows for a whole week. Shark Week is a summer tradition! 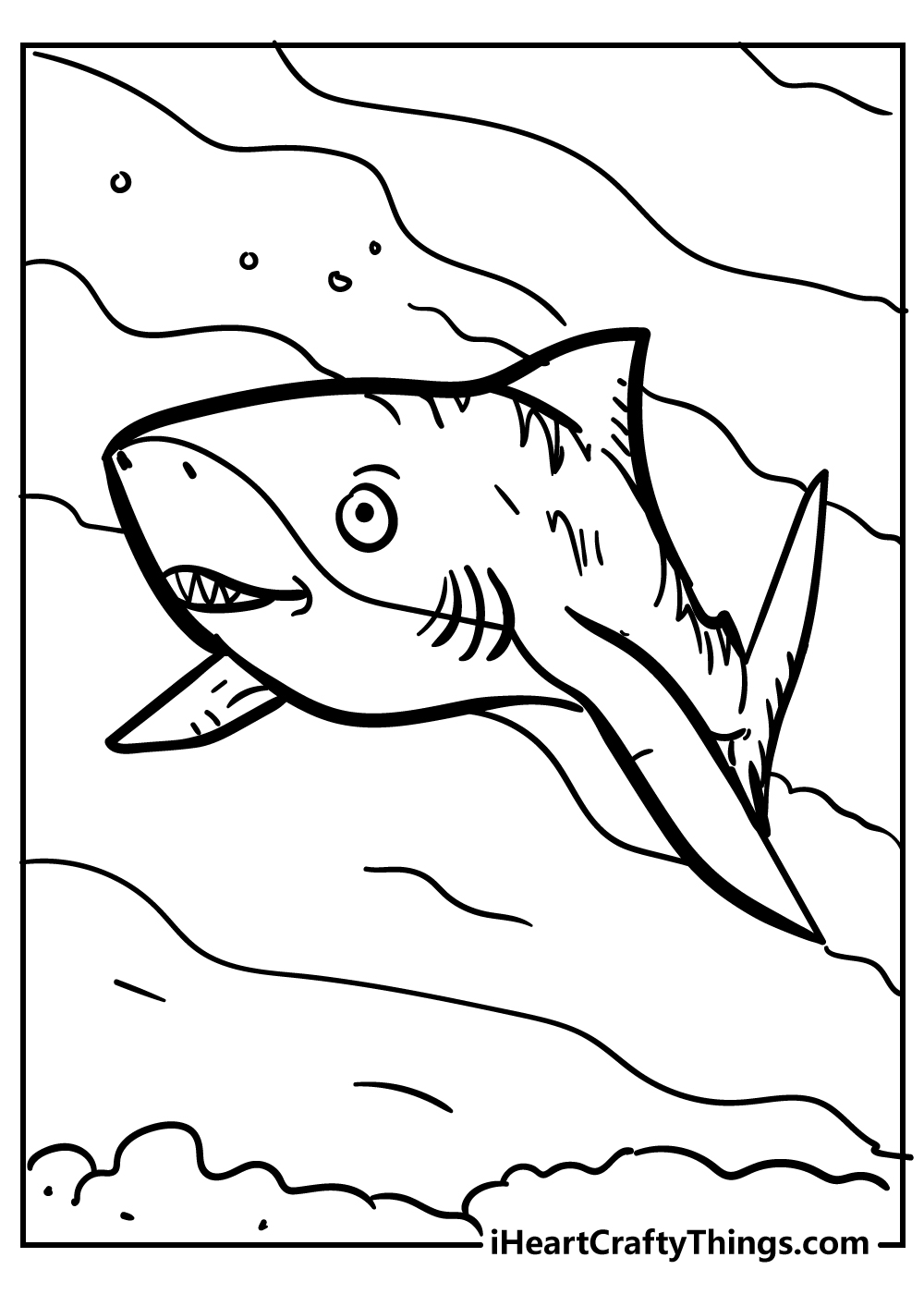 You’ve reached the last shark coloring page, but don’t worry there are plenty more fun and fascinating coloring sheets featuring your favorite animals and characters to come. We are constantly updating our catalog of coloring pages and printable sheets.

We hope these shark coloring pages have fascinated and delighted you. Remember to post your finished masterpiece on our Facebook page. We love seeing all the creative ways you bring to life these super fun images. 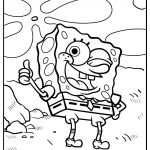 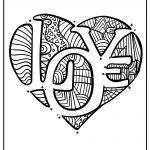