Foghorn Leghorn, Miss Prissy, Heihei, and Panchito Pistoles are some of the many examples of beloved chicken characters from cartoon TV shows and books.

Why do children love chickens? Well, there’s something about these small and domesticated birds that makes them adorable.

We created a list of the cutest chickens to celebrate the latest homesteading trend of getting feathered pets.

If you’re living in the suburbs and your children dream of playing with chicken, check our collection of coloring printables.

We’ve got a whole farmyard full of free coloring pages.

Do your children want to meet chickens? It may be because they find them some of the funniest domestic animals or because their favorite cartoon character is one.

This rooster looks hungry. Maybe he’s on the hunt for some worms lurking in the grass surrounding him, or perhaps he wants some seeds.

This coloring printable for children depicts a small bird that looks like a Rosecomb Bantam, a breed of petite chickens with brightly colored plumage, voluminous tails, and deep red ridges. 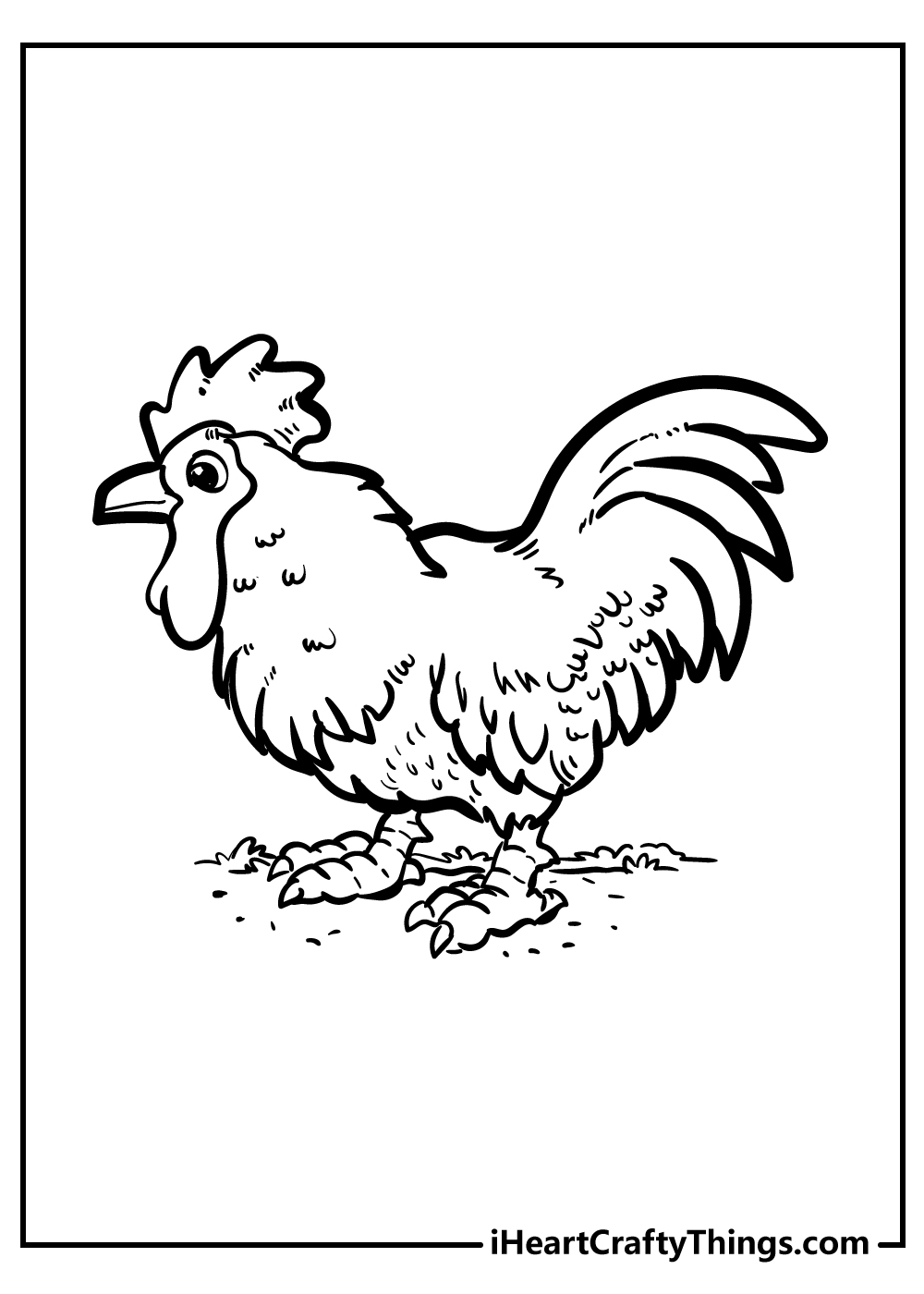 Take a look at this cute baby chicken.

Farm fowls may look all the same to your children, but you should teach them that they can recognize each other because chickens can distinguish over 100 faces of their family.

If you’re looking for chicken coloring printables to download for free, here is a page with a baby chicken that just hatched from the egg.

It has fuzzy fluff and its little wings directed forward as it’s ready to leave the eggshells and go on its first adventure. 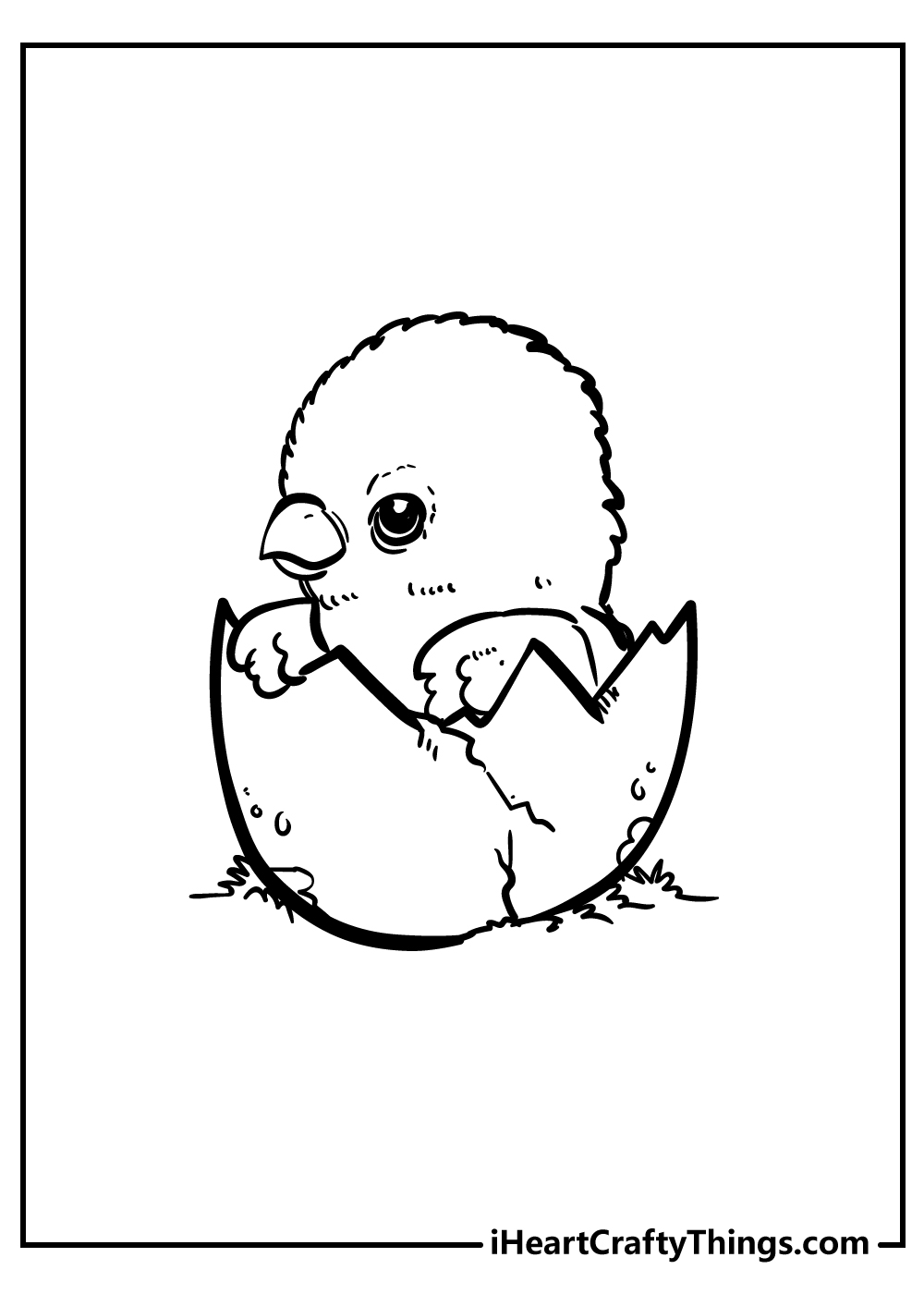 Roosters crow because they have an internal clock that helps them anticipate sunrise. They need to see the daylight coming to run ahead in defending their territory and hunting for food.

This coloring page shows a rooster crowing in the morning. He climbed on a rock to elevate himself above the ground to ensure that the other birds living at the farm see him.

He has a prominent ridge, layered plumage, and a magnificent tail. 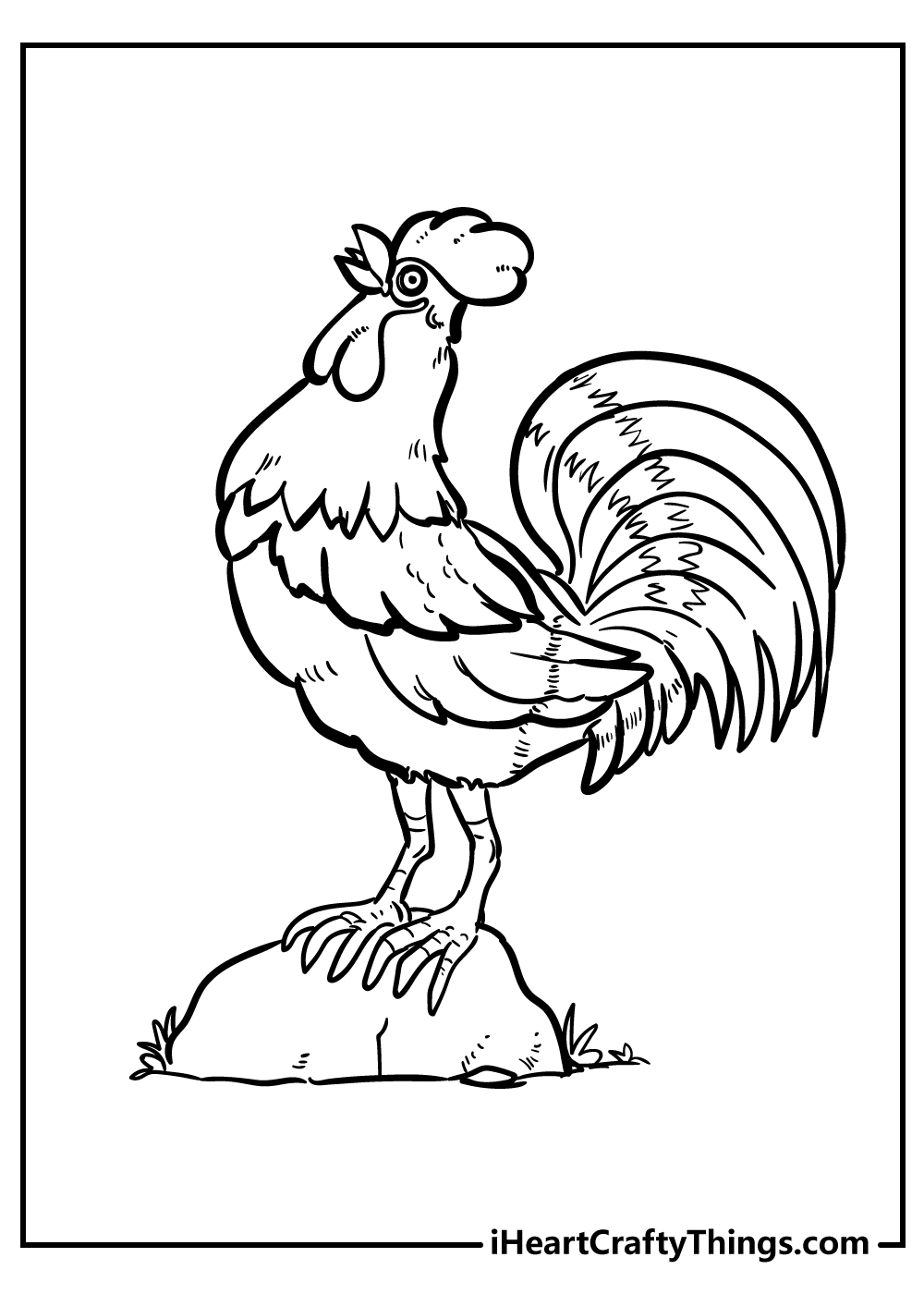 Foghorn Leghorn is a fictional rooster that appears in the Looney Tunes films. We were inspired by his character when we created this coloring sheet because we know children love him.

If your children asked you what’s the rooster’s name that says “Hey, whatcha making there boy? Looks like sodi-pop.

Hyuk yuk! Watch it fizz!!” is, you need to search no more because here he is. He may usually be referred to as the Looney Tunes Chicken, but now you know his name.

In this chicken coloring sheet, you can see a large rooster that seems to smile while telling a joke. He has a huge ridge and beads and a voluminous tail.

If your children want to paint it to resemble Foghorn Leghorn, they should use white for the rooster’s body and red for its head and tail. 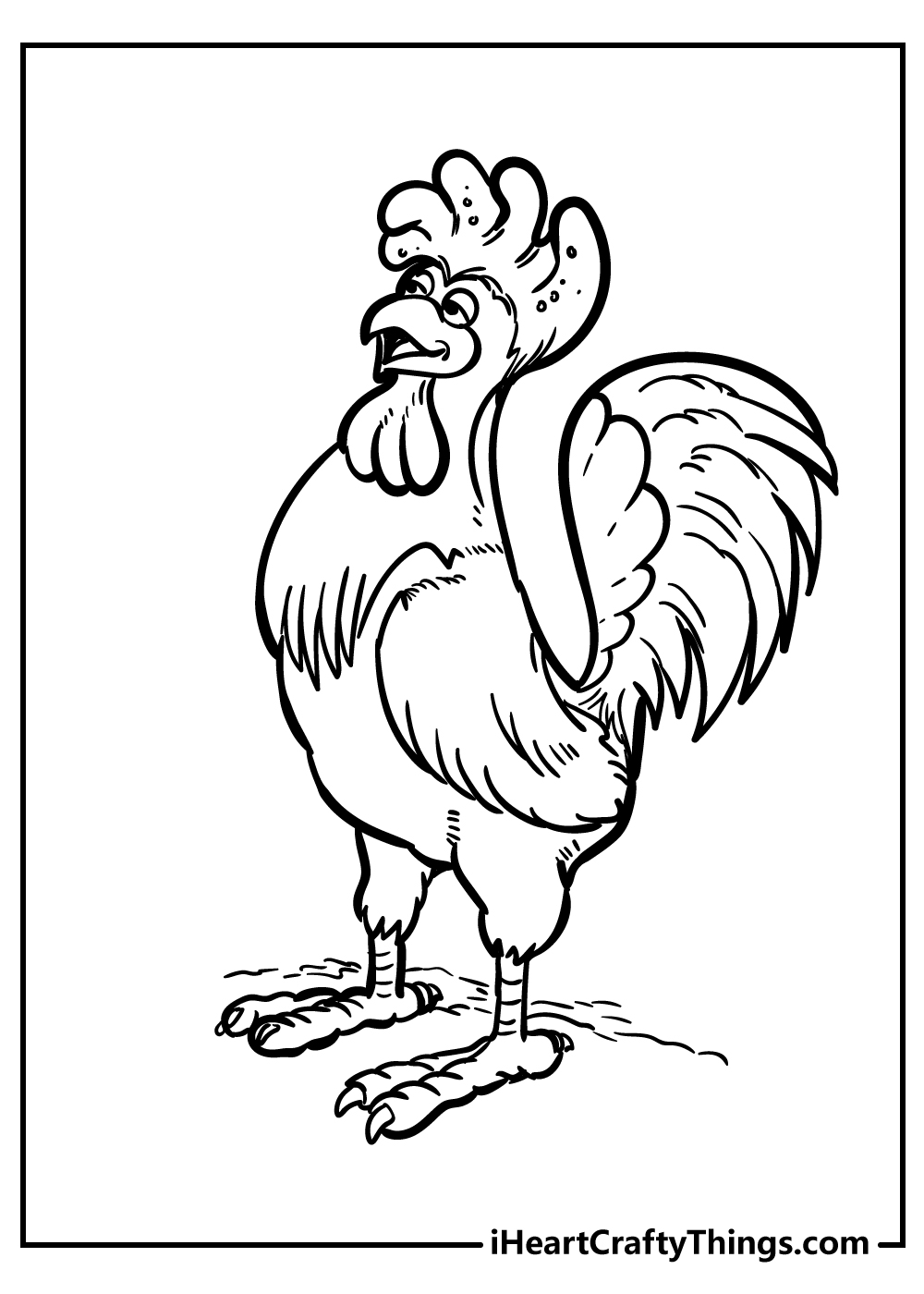 This rooster doesn’t look as fierce as the one from the previous image; however, looks can always be deceiving.

Did you know that there’s an evolutionary link between Tyrannosaur Rex dinosaurs and domesticated chicken? It seems chickens inherit their leg bone points from them.

The sumptuous rooster in this printable sheet has quite imposing legs to match its intricate plumage, large beads, and magnificent tail. 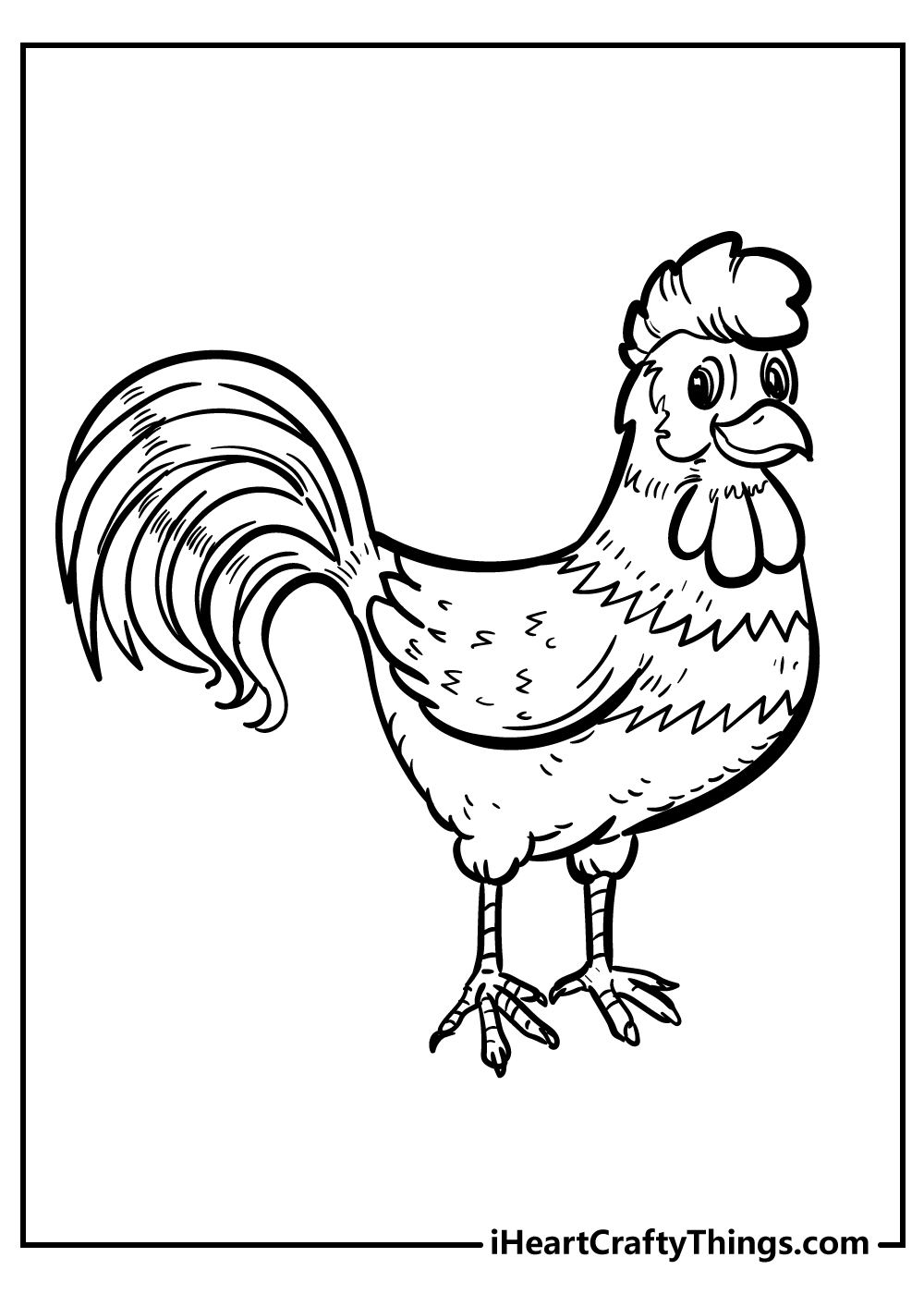 The rooster in this chicken page definitely looks fiery with his furrowed brows, intense eye contact, and the way he takes up space by standing tall.

You can use the printable sheet to help your children read body language in pets and birds and tell when they shouldn’t approach them.

This chicken printable page depicts a bird with rich plumage, a heavy tail, a large ridge, and big beads. He most likely is an adult rooster considering his spurs. 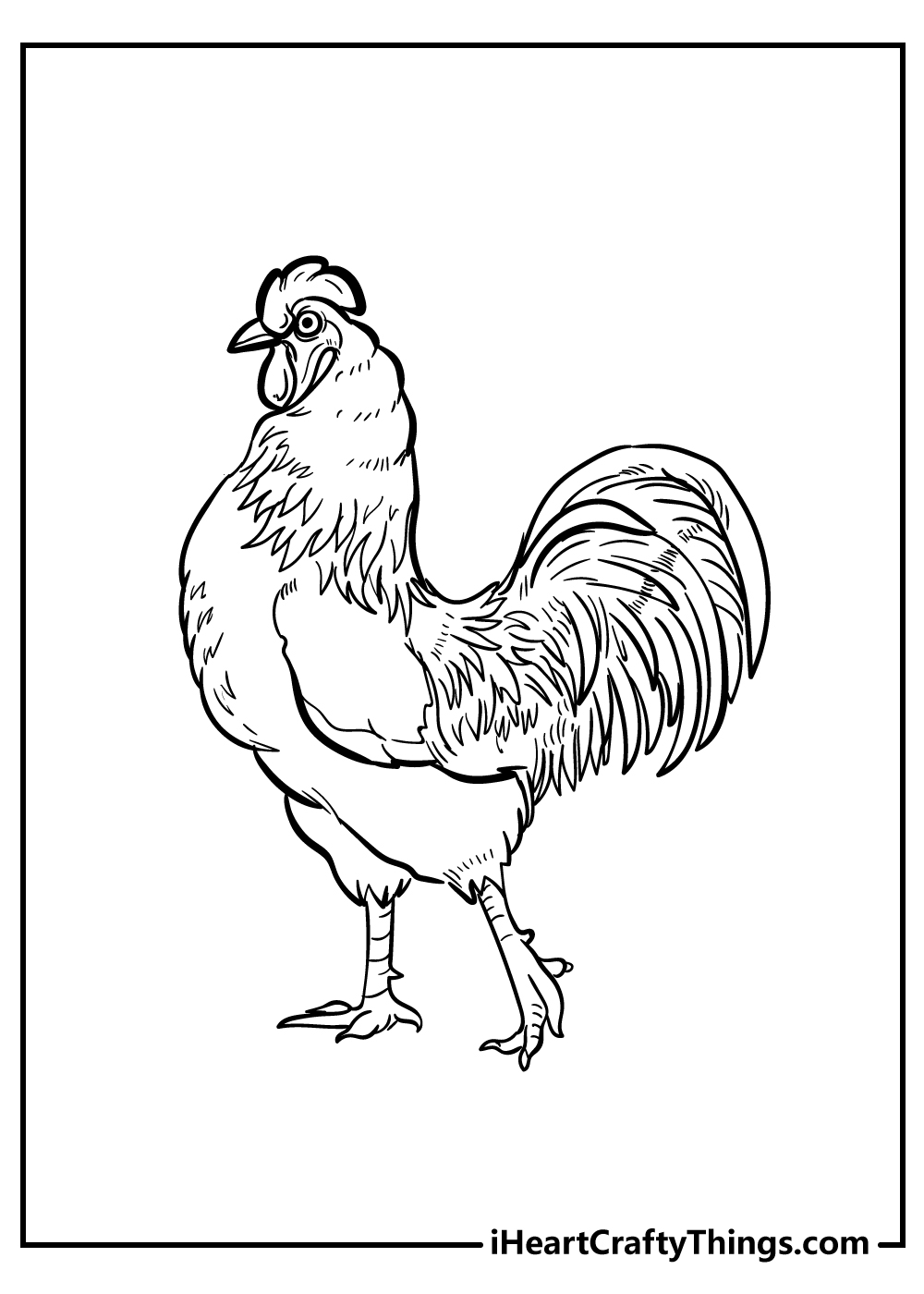 Here is another example of a ferocious rooster. You can tell he is the king of the farm from how confidently he watches over his territory.

From the way his plumage looks, he surely has multicolored feathers.

Use this chicken page to encourage your children’s creativity when it comes to coloring. They can use multiple shades to paint this rooster and enhance his grandeur. 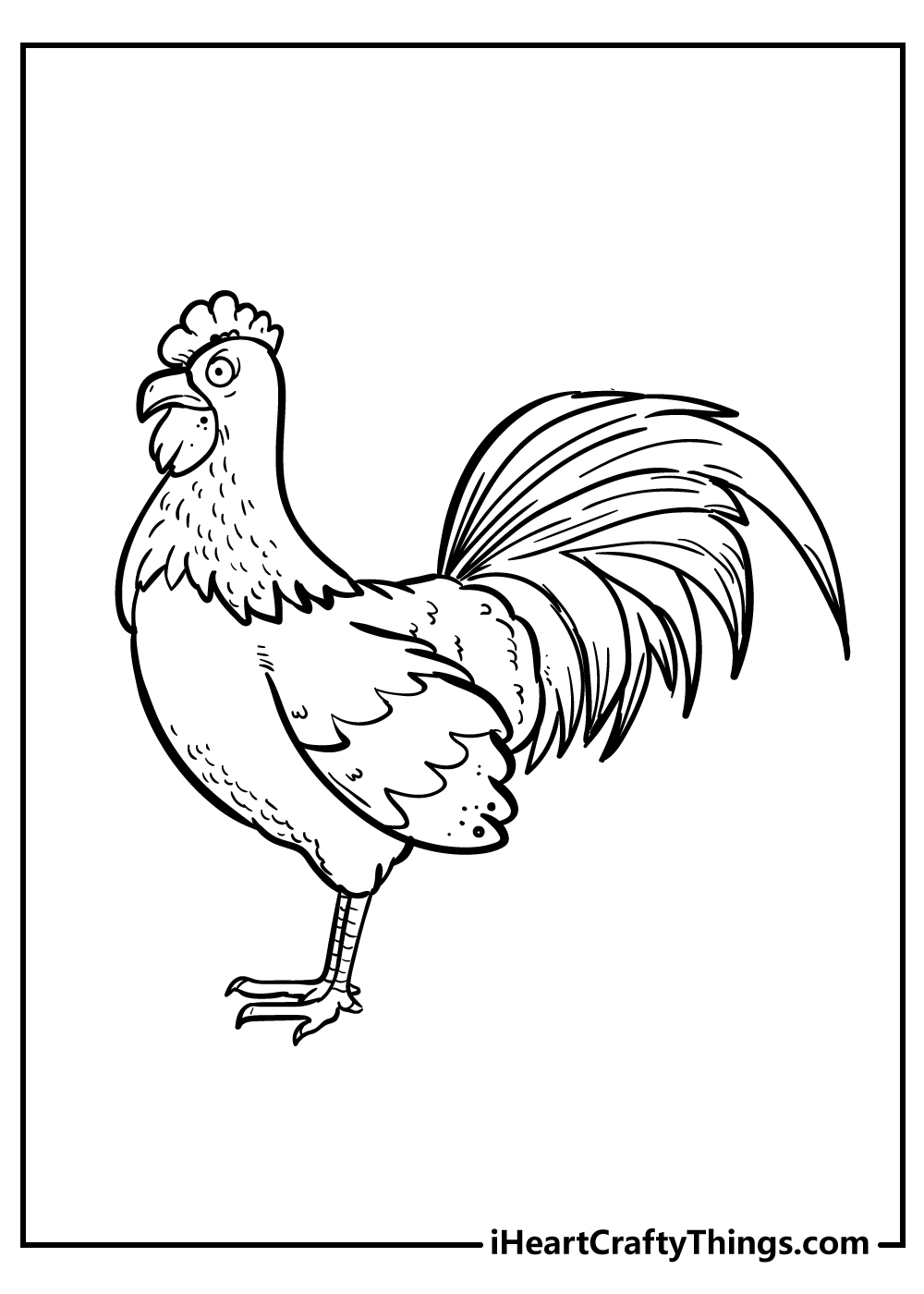 Children growing up far away from the countryside can have the misconception that chickens aren’t very exciting animals.

But if you introduce your children to these farm birds with cartoon TV shows like Moana, Chicken Run, and Looney Tunes they will learn that they have fascinating lives.

The hen in this coloring page looks like she’s on her way to hunt for food for her baby chicken. She has a fluffy plumage and an impressive ridge.

Hens have more petite tails than roosters, but their feathers are as beautifully colored as theirs. 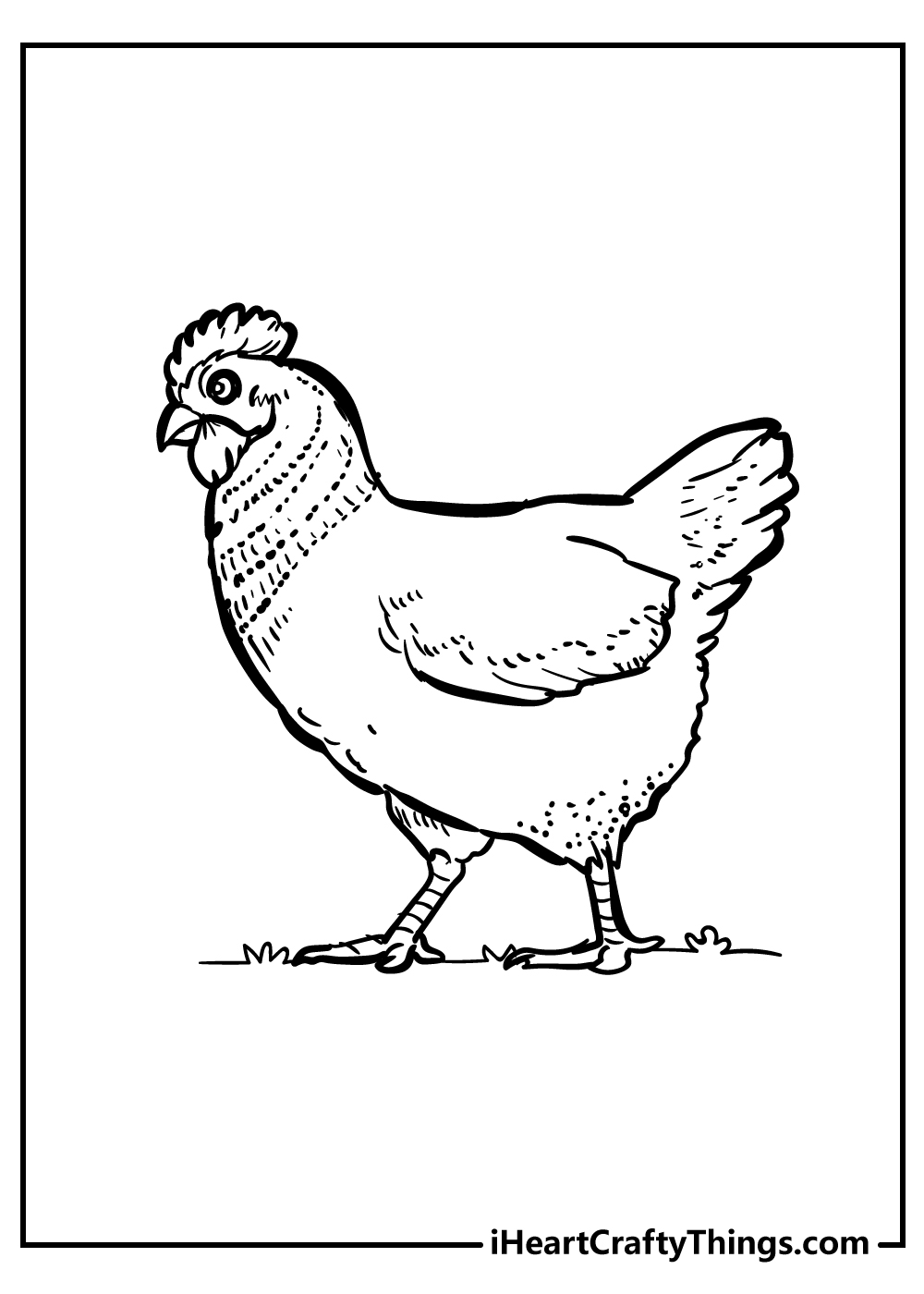 Use our chicken coloring pages to teach your children that these domestic animals have a full-color vision, and they can easily distinguish between different types of foods; unlike other pets, they are not color blind. Chickens see the world in color, just like humans.

For example, this coloring sheet offers them the opportunity to see how a hen looks in detail as it shows a bird with a fluffy plummeting sitting on a pool of grains. 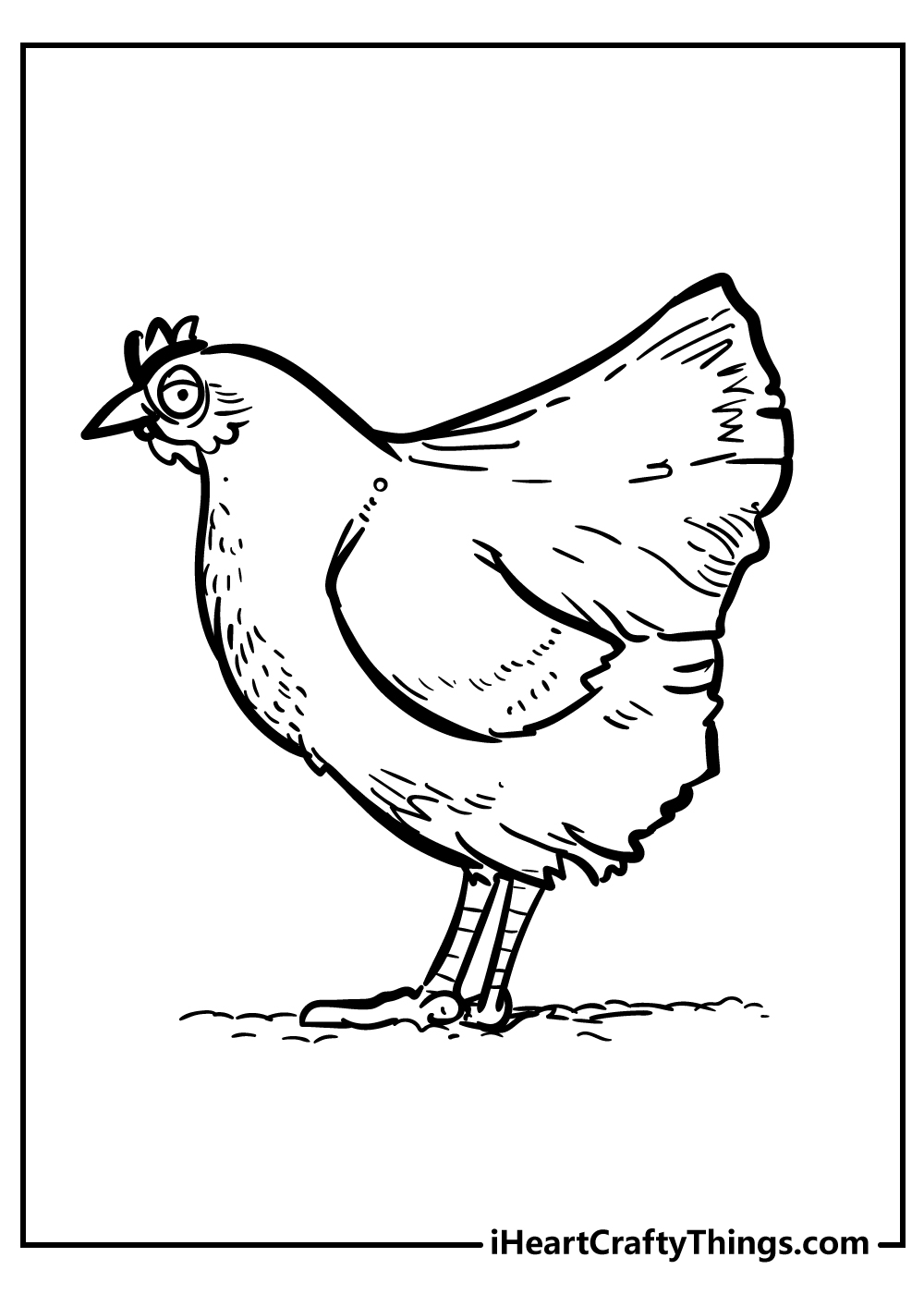 Parents can use chicken coloring printable sheets to teach their children about farm fowls. Hens and roosters look very different, and it’s easy for children to tell them apart.

For example, this page depicts a hen walking on grass, probably searching for food or watching over her baby chicken.

You can show your children pictures of different kinds of chicken before they start painting coloring pages to help them picture how to color them.

Even if chickens are some of the most common and widespread domestic animals, your children probably never saw a real one if you’re living in the city.

Download and print our chicken coloring pages for free to teach your children everything about them. 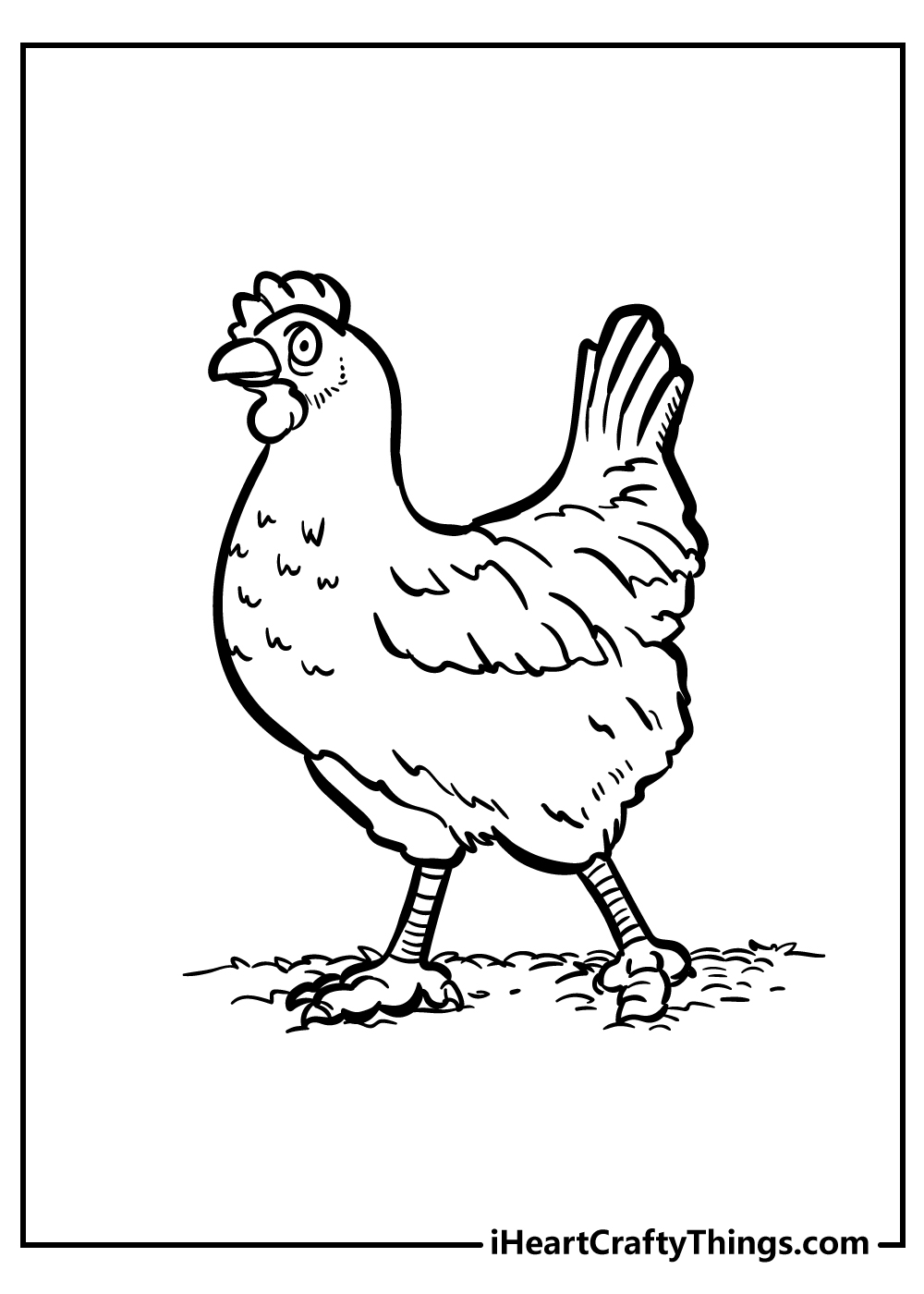 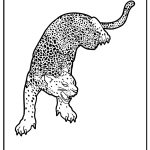 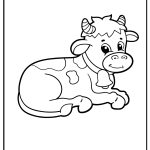