Natural disasters like tornadoes, tsunami, and volcanoes have always been a popular subject for coloring pages, simply because they can be used to teach your little one about these powerful natural forces.

The chances of being involved in a volcanic eruption are pretty low compared to other natural disasters. However, it’s good to be observant of the giant vents of the Earth.

Put yourself in the shoes of a volcanologist with these cute volcano coloring pages!

Did you know? Volcanos are openings of the Earth’s surface. When they erupt, lava, ash, and gas are expelled.

Volcanos are mainly found where two of the Earth’s tectonic plates join. Most tectonic plates are found in the area called the Ring of Fire which stretches around the edge of the Pacific Ocean.

More than half of the world’s active volcanoes are part of the Ring of Fire and are located under the ocean. They’re called submarine volcanoes, and they’re fascinating! 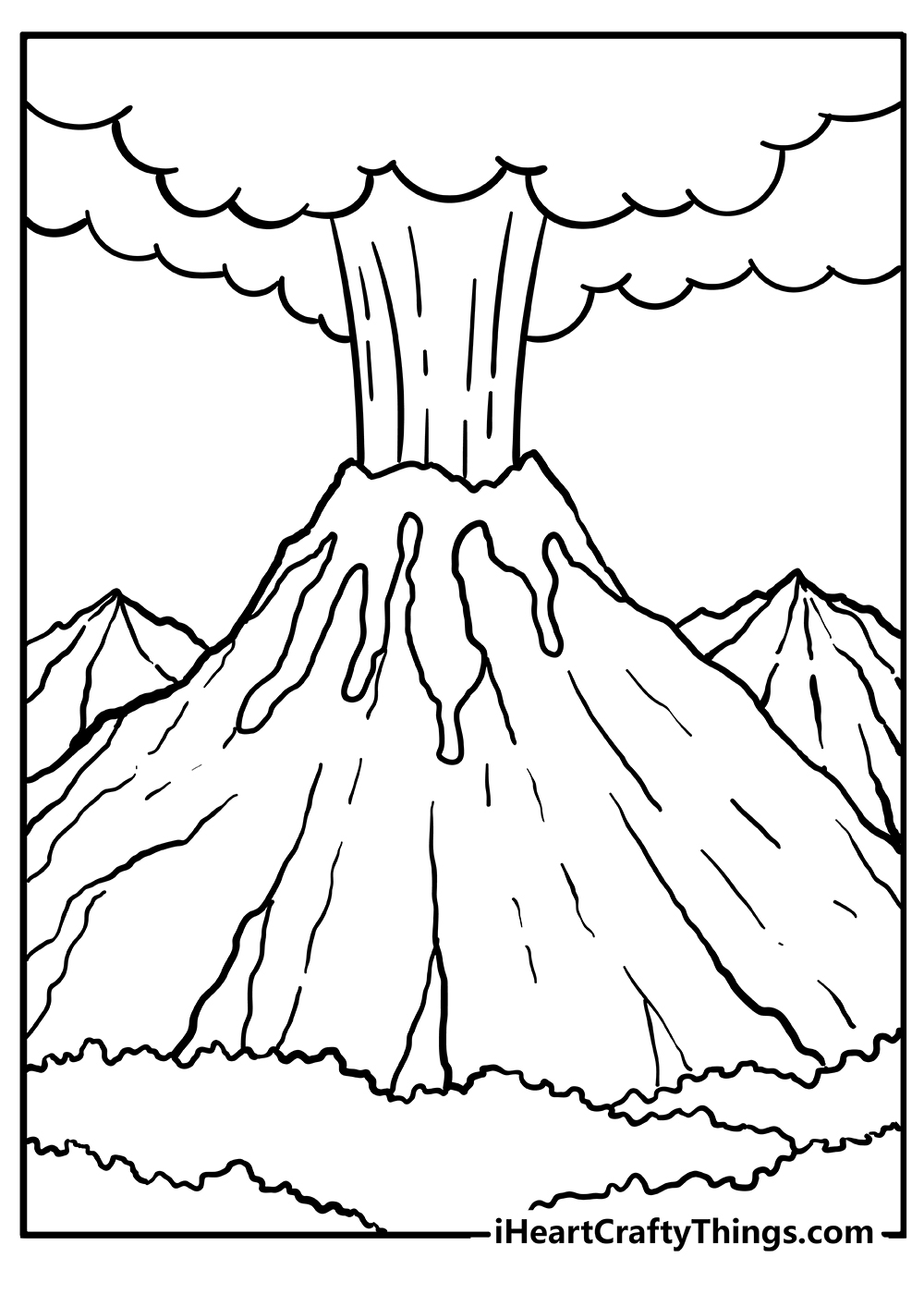 What happens when a volcano erupts? Well, let’s just say the ash that gets expelled can make it hard for people and animals to breathe.

They can also cause fires. Mud and ash can mix with rain and melting snow, which travels fast, destroying large areas of land.

Check out this volcano! It looks pretty outraged. Don’t forget to combine mad red with orange for a more dramatic effect on these volcano coloring pages. 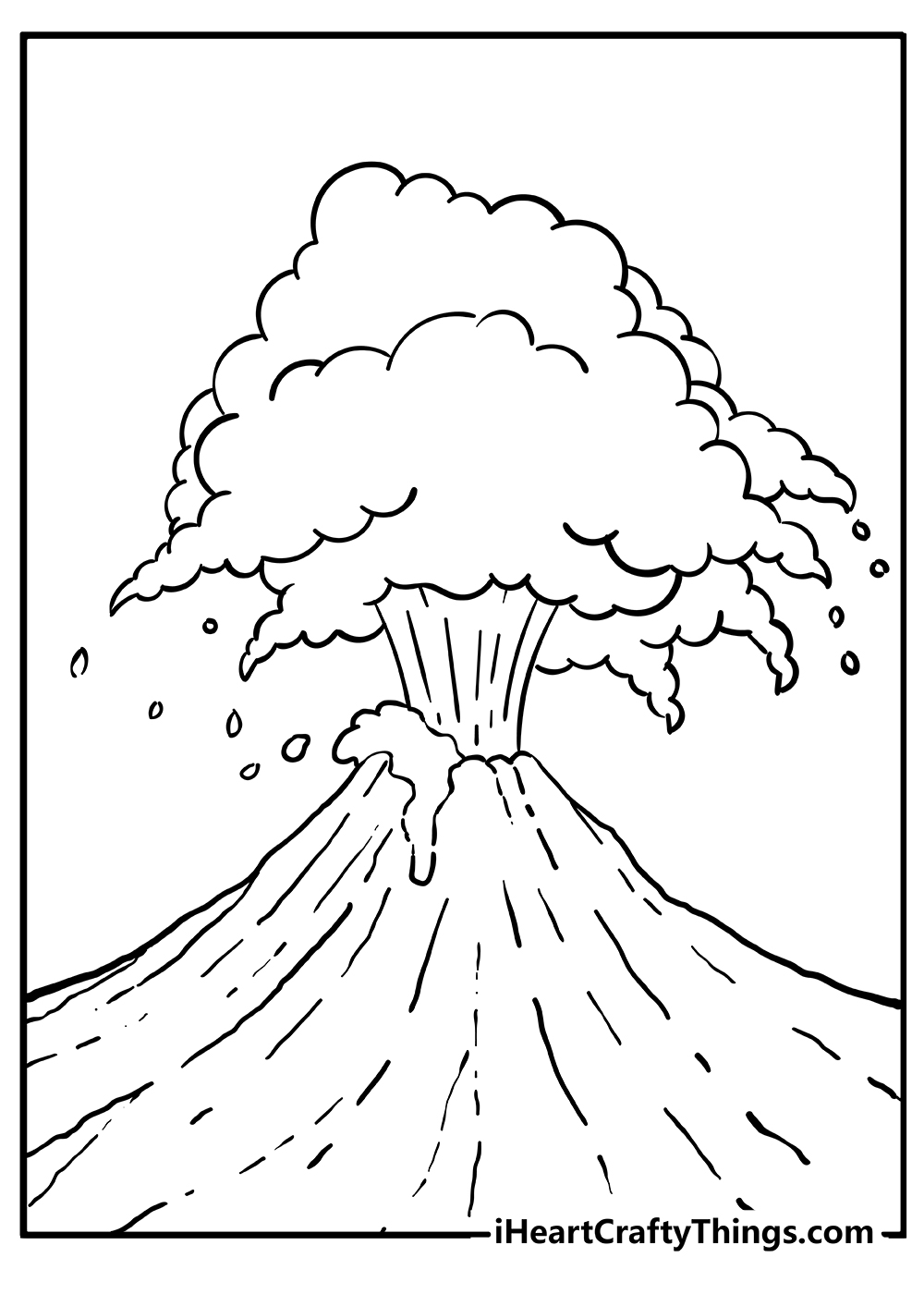 Volcanoes can be destructive, no doubt. But volcanic action can also lead to the formation of fertile soils. See how happy and healthy those palms are?

That’s because the resulting ash from recent magma expulsion can have distinct amounts of soil nutrients.

Oxygen and silica take up the largest percentage of elements released in the event of a volcanic eruption; other elements include sulfur dioxide, carbon dioxide, rock particles, and hydrogen chloride.

All of which form the most fertile soil in the world.

Happy soil equals happy plants! Ponder on that while you relish these cute volcano coloring sheets. 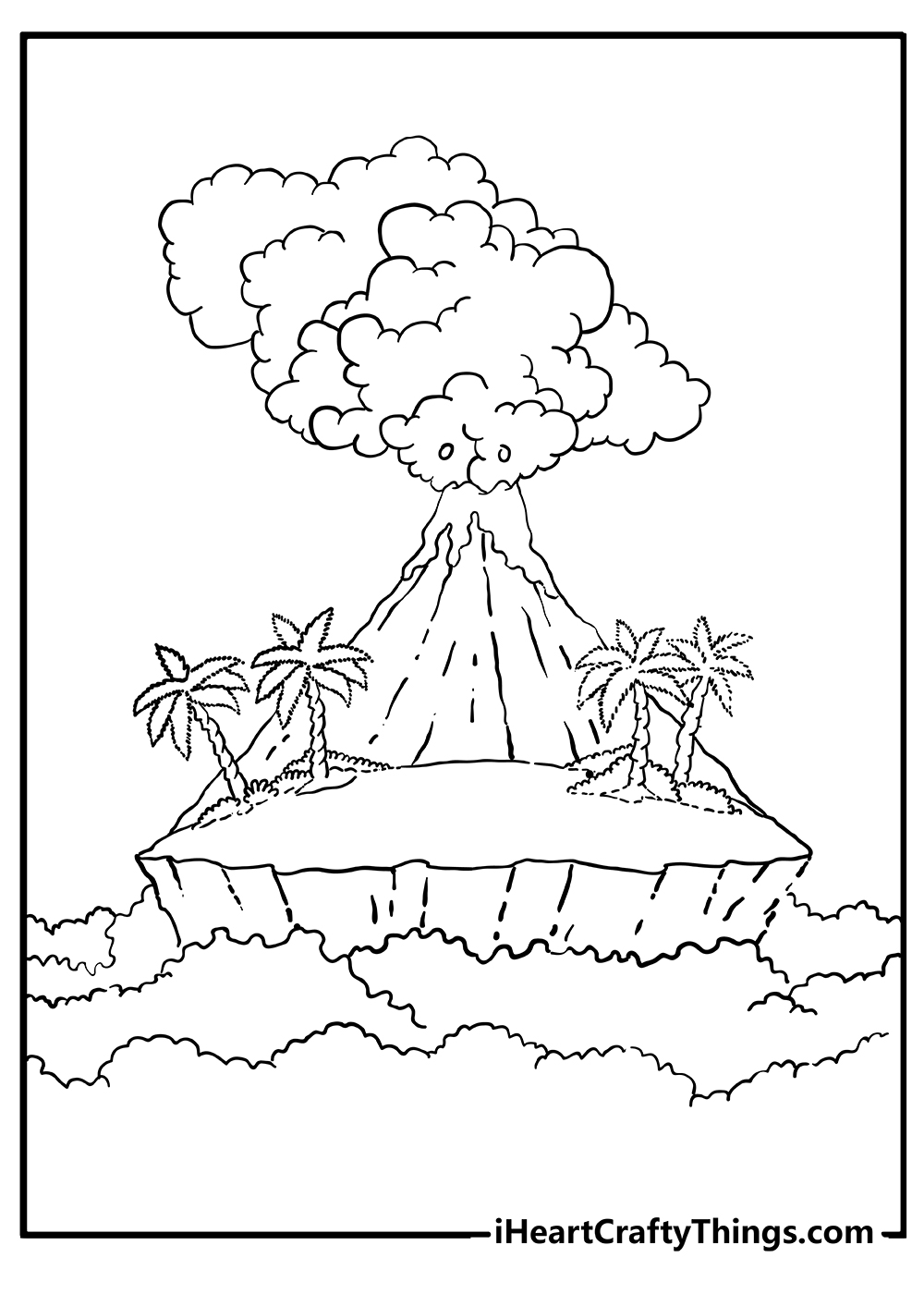 Just look at this volcano coloring page! Have you ever wondered where the word volcano comes from? It comes from the word “Vulcan,” who happens to be the Roman God of Fire!

While volcanos don’t really expel fire, they are all made from hot magma reaching the surface of the Earth and erupting.

Some volcanoes have lava flow with low viscosity that flows dozens of kilometers: Interestingly, that makes them very wide with smoothly sloping flanks.

Check out this smoky volcano! It looks out and about to fire some serious flowy magma. Let your imagination flow as well with these spectacular volcano coloring pages! 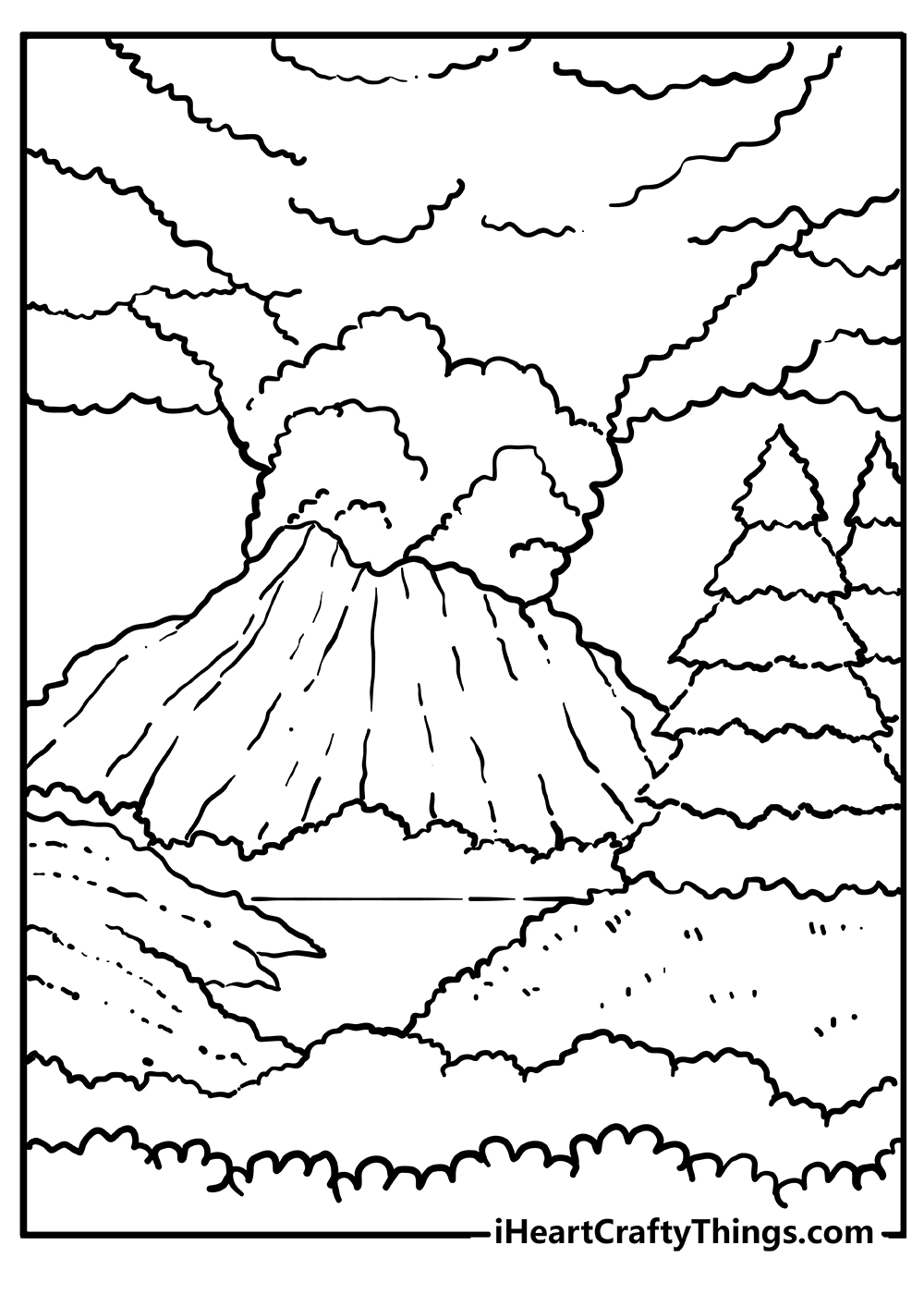 Does this volcano seem familiar to you? We bet it does! It’s the famous Mount Fuji, perhaps Japan’s most famous symbol.

Fuji has fascinated people for millennia, and today, the appreciation for this sacred mountain ranges from adoration to downright obsession.

This beauty also happens to be an active volcano, making it so intriguing to our ears. Teleport into the Edo with these lovely volcano coloring sheets! 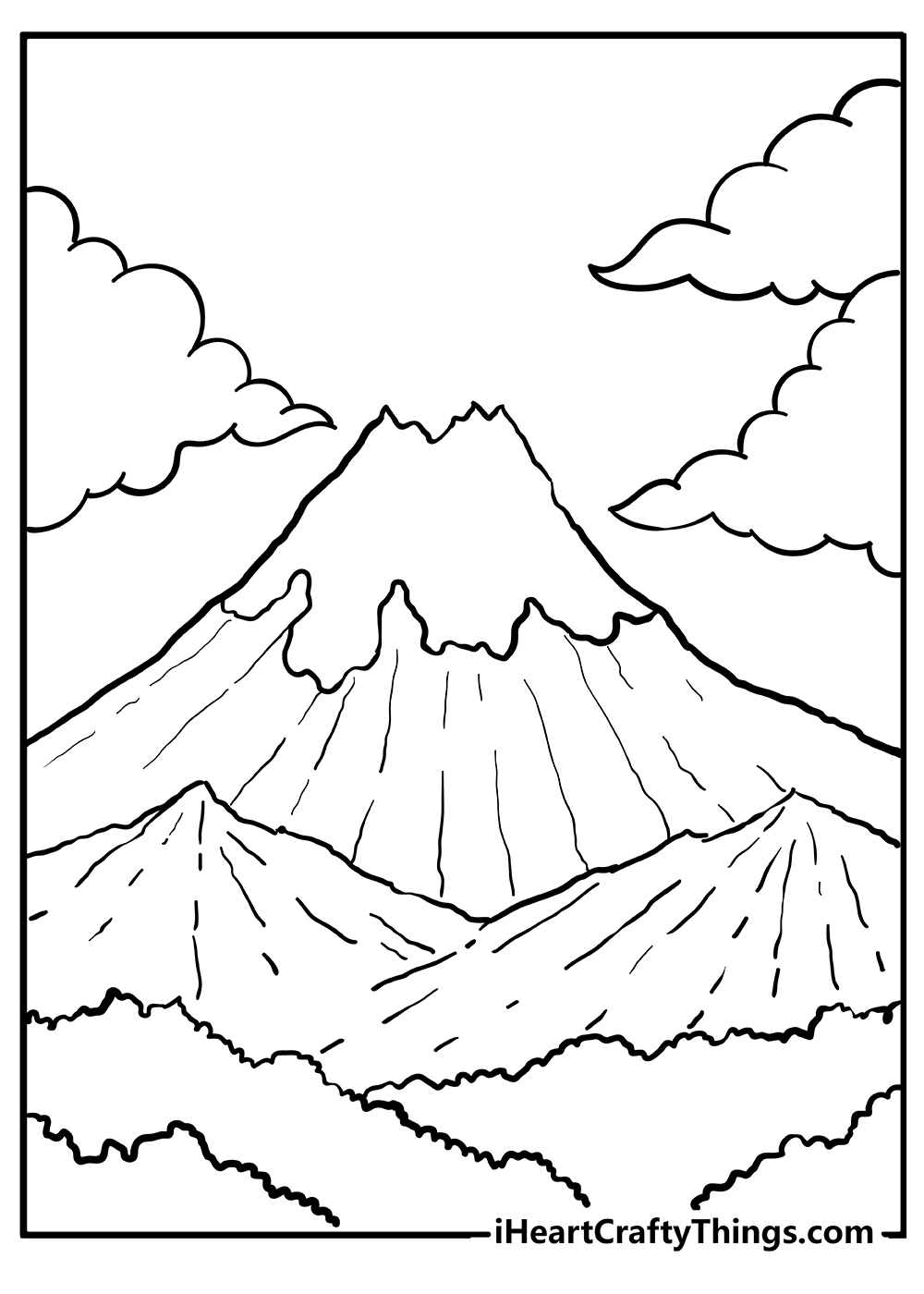 How hot can volcano lava be? Very hot! It can get up to 1,250 Celsius, which makes volcanoes very dangerous, and it’s why they should be avoided.

About 30 km beneath our feet is the Earth’s mantle. This region extends down to the Earth’s core and is so hot that molten rock can squeeze out and form giant bubbles of liquid rock called magma chambers.

Because the magma is lighter than the surrounding rock, it rises up, finding cracks and weaknesses in the Earth’s crust. Cool, right? 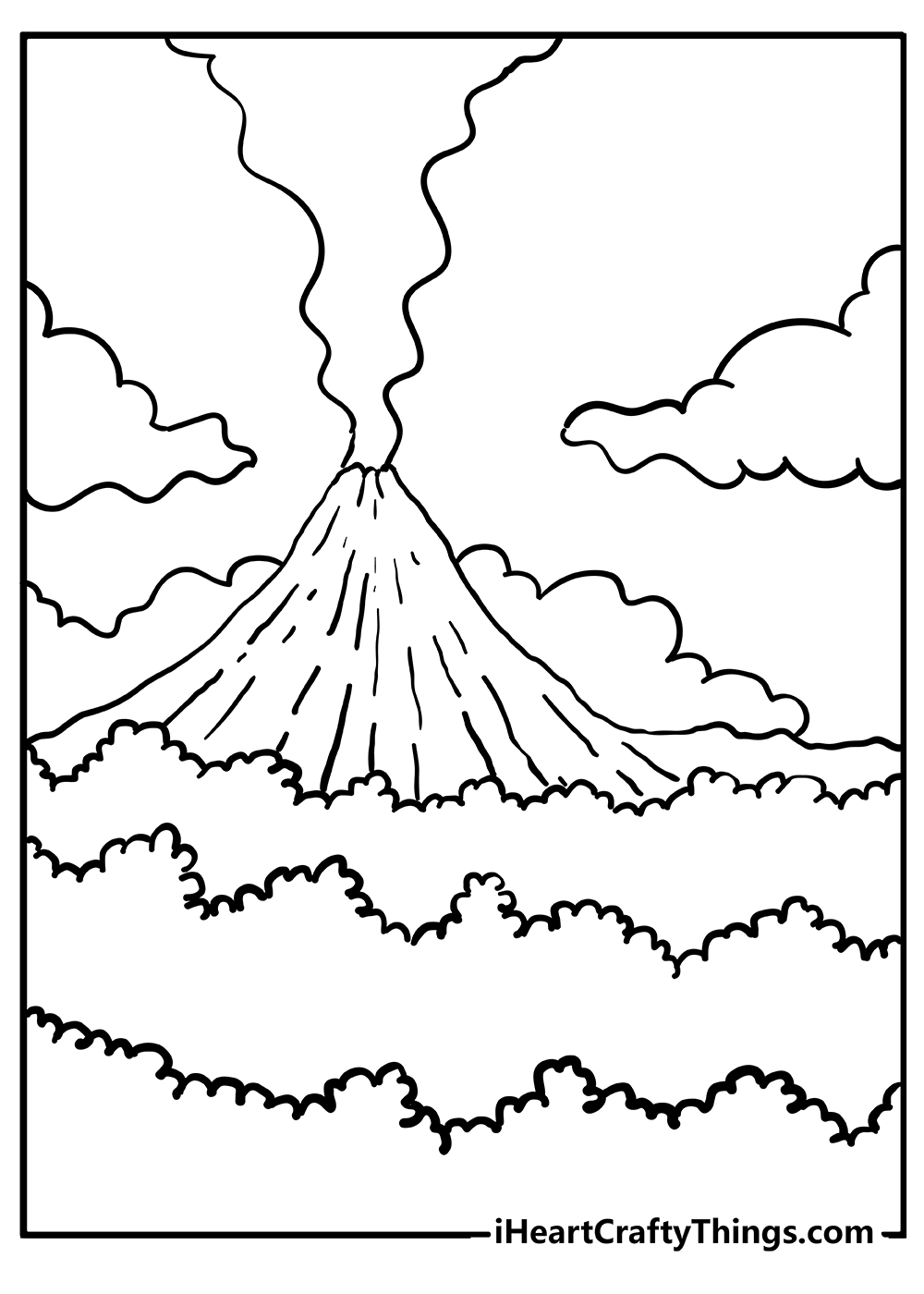 Not all volcanoes are sleepy. They are also active and extinct. Active volcanoes are those that have had an eruption in historical times.

Somewhere around the world, there are likely 20 active volcanoes erupting as you’re reading this.

Dormant volcanoes, on the other hand, are those that have erupted in historical times and have the potential to erupt again.

The extinct ones haven’t erupted in the past 10,000 years, and scientists think they probably won’t erupt again. Yet, they look gorgeous and make for great hiking trails. 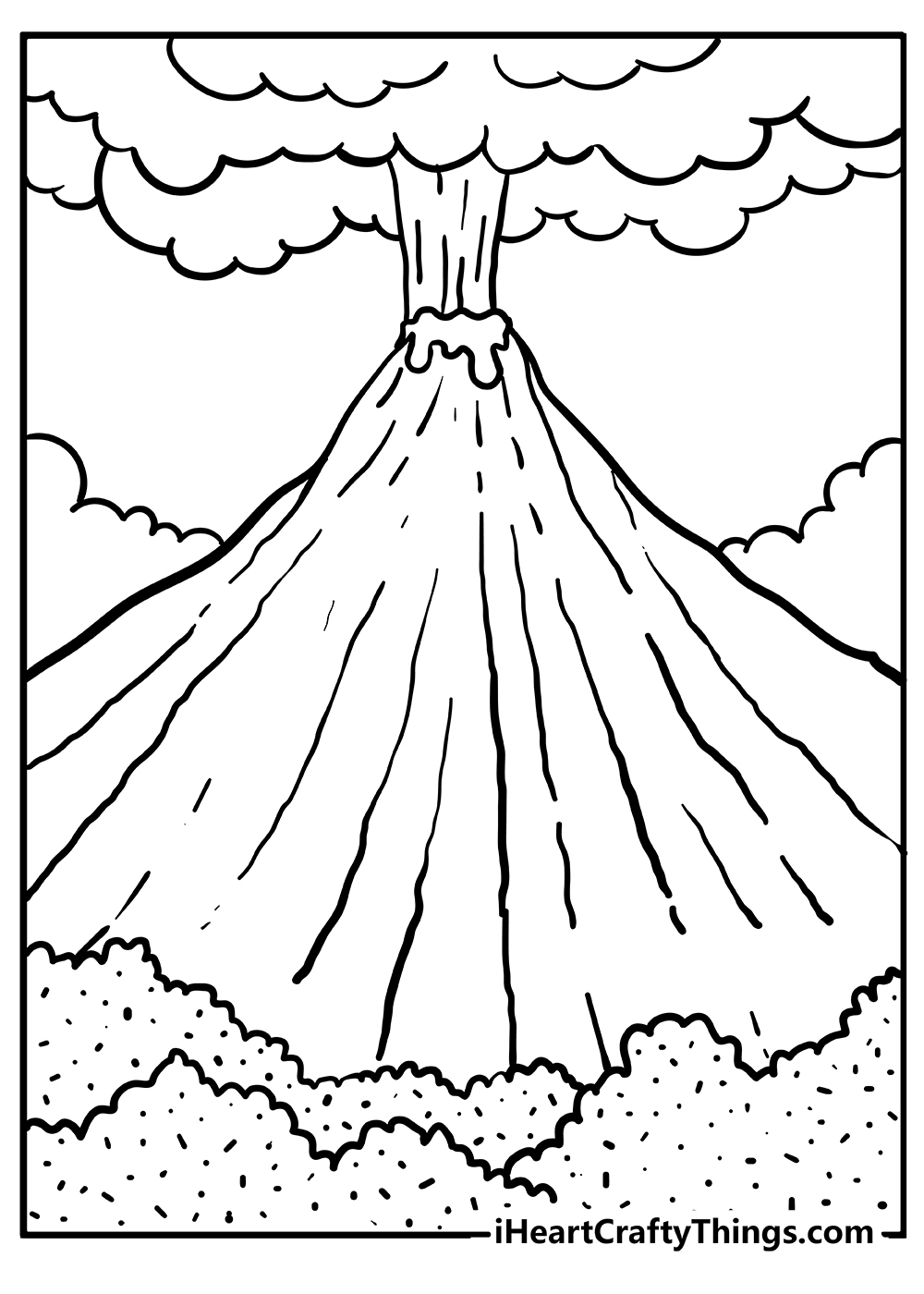 Why do people live near volcanoes? Lots of different reasons.

People choose to live near volcanoes because the soil is very fertile, there are minerals and geothermal energy, and they are good for tourism.

Did you know? The volcano on Fagradalsfjall is still Iceland’s hottest attraction? It seems that tourists flock to Iceland to experience the rare close contact with the Earth’s interior.

This spring, the volcano came to life, and over 260,000 people have visited it so far. 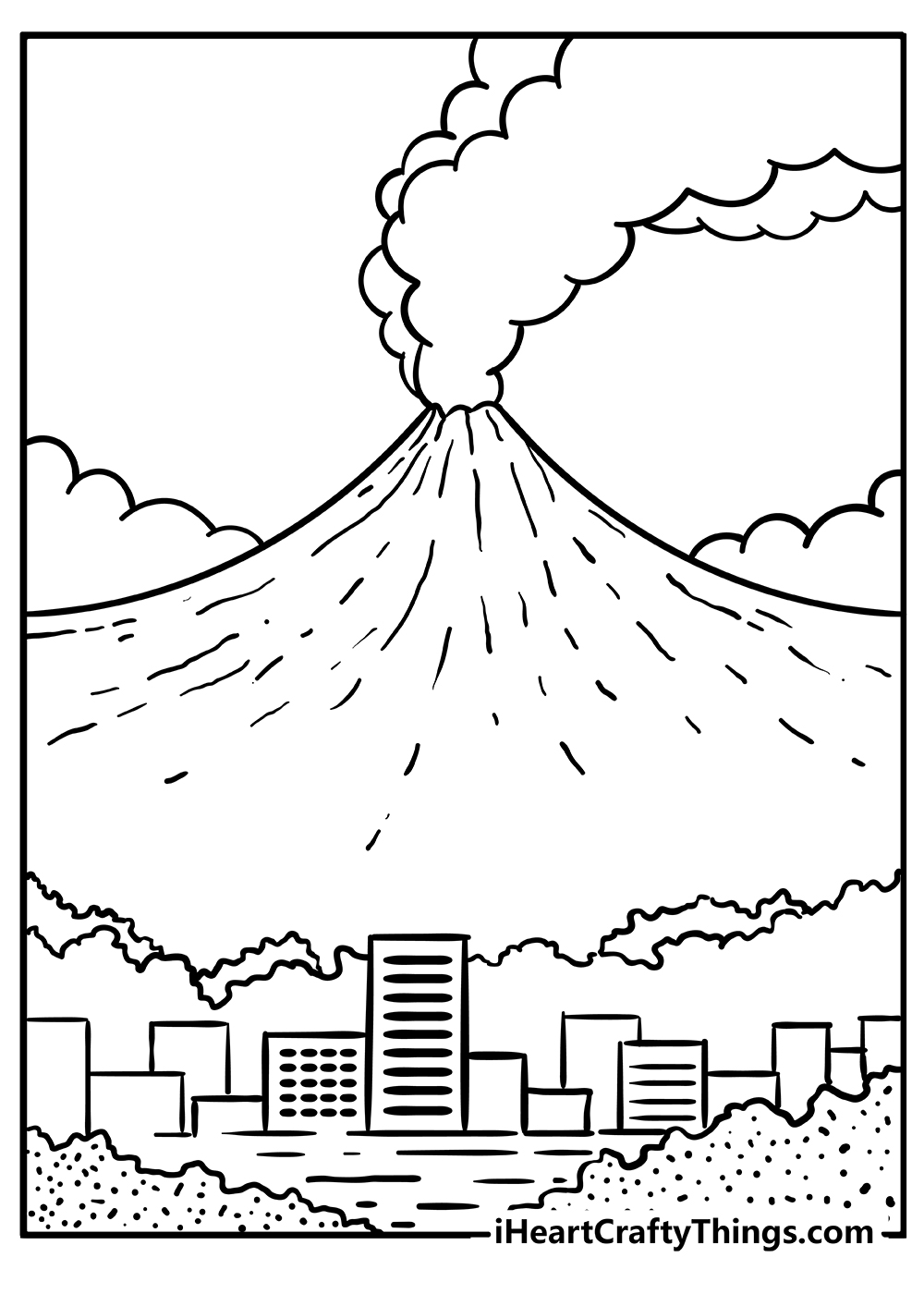 One of the most famous volcanoes in the world turns out to be located in mainland Europe, more exactly in Italy.

Vesuvius is most known for the 79 AD eruption, which ruined the Roman cities of Pompei and Herculaneum.

Though Vesuvius’s last eruption was in 1994, it still represents a great danger to the cities surrounding it, particularly to the busy metropolis of Naples.

Our last but not least volcano coloring sheet reminds us of Vesuvius! 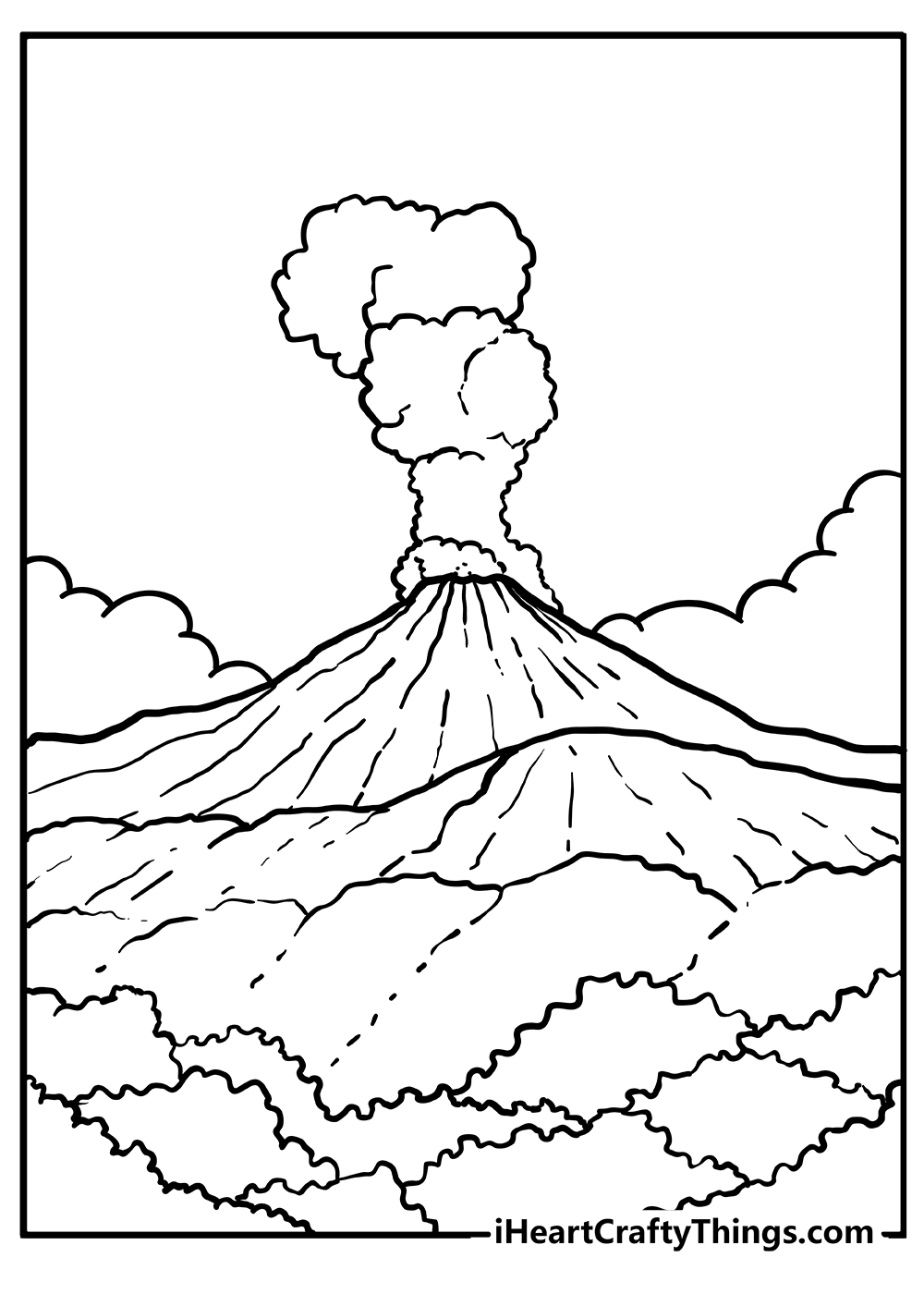 But volcanoes are more than just natural wonders and tourist attractions. Volcanoes are of great importance to life on Earth.

Without them, most of Earth’s water would still be trapped in the crust and mantle.

Besides air and water, volcanoes are responsible for land, another necessity for the very existence of many life forms. 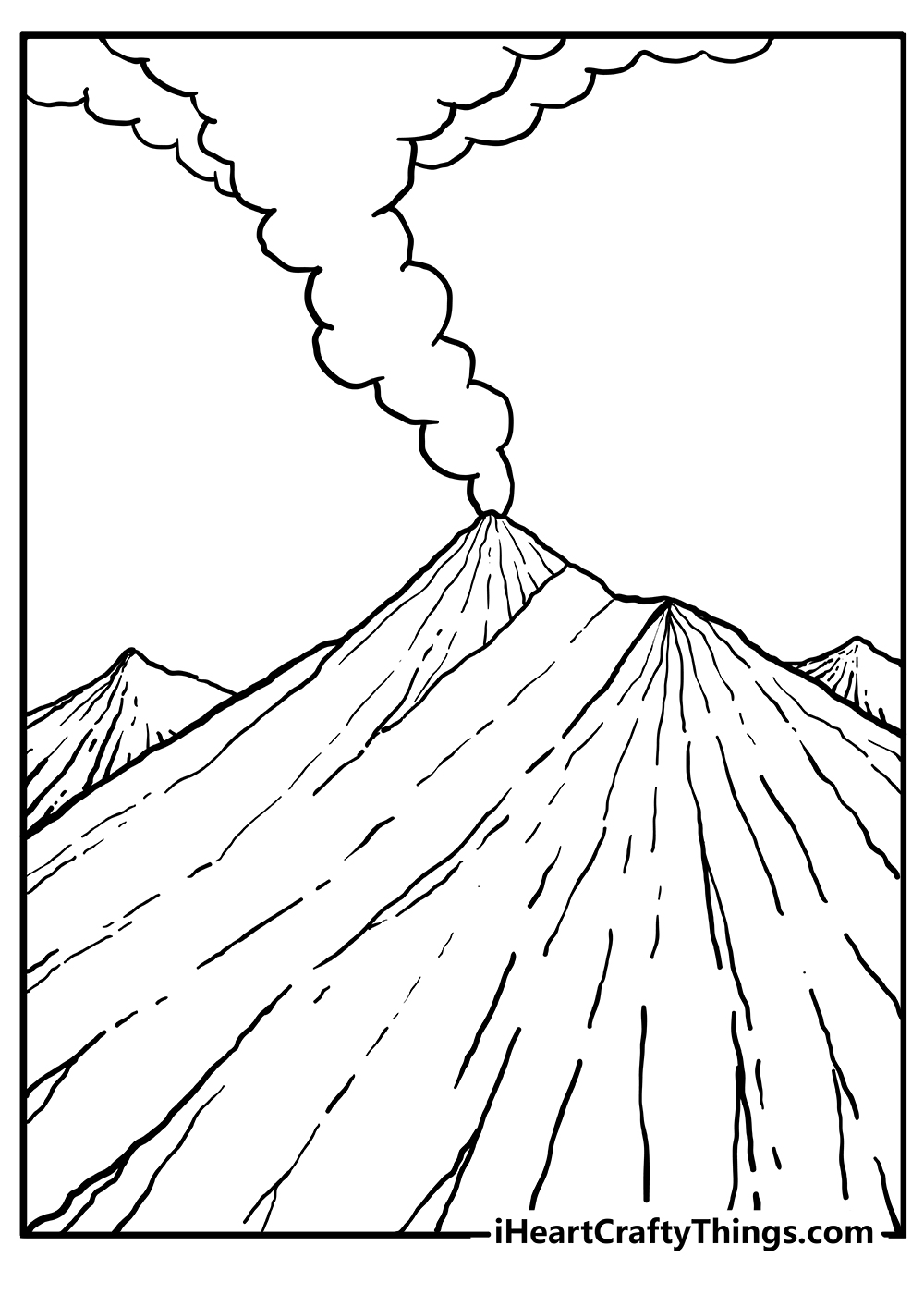 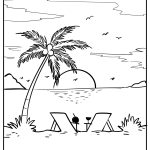 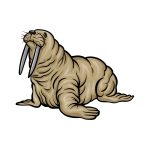