Owls are fascinating creatures for so many reasons. They are nocturnal carnivores that create a district hooting sound that you might have heard at night. Although some people might think that all owls are the same, there are actually many different breeds.

Owls come in many different shapes, sizes, and colors, with their own unique habits and ways of living, so our readers can use these owl coloring pages to design these beautiful birds however they want.

Many people are fascinated by owls The popularity of these creatures has translated into a high demand from our readers for printable owl coloring pages that you can enjoy for free.

So without further ado, here are 25 original owl coloring pages that you can download and print for free. Have fun and use your imagination!

Owls have sharp talons, like the one in this coloring page. They need them because owls are carnivorous animals. They hunt and eat small mammals like mice or rabbits. Owls actually don’t eat any seeds or fruits as many birds do. 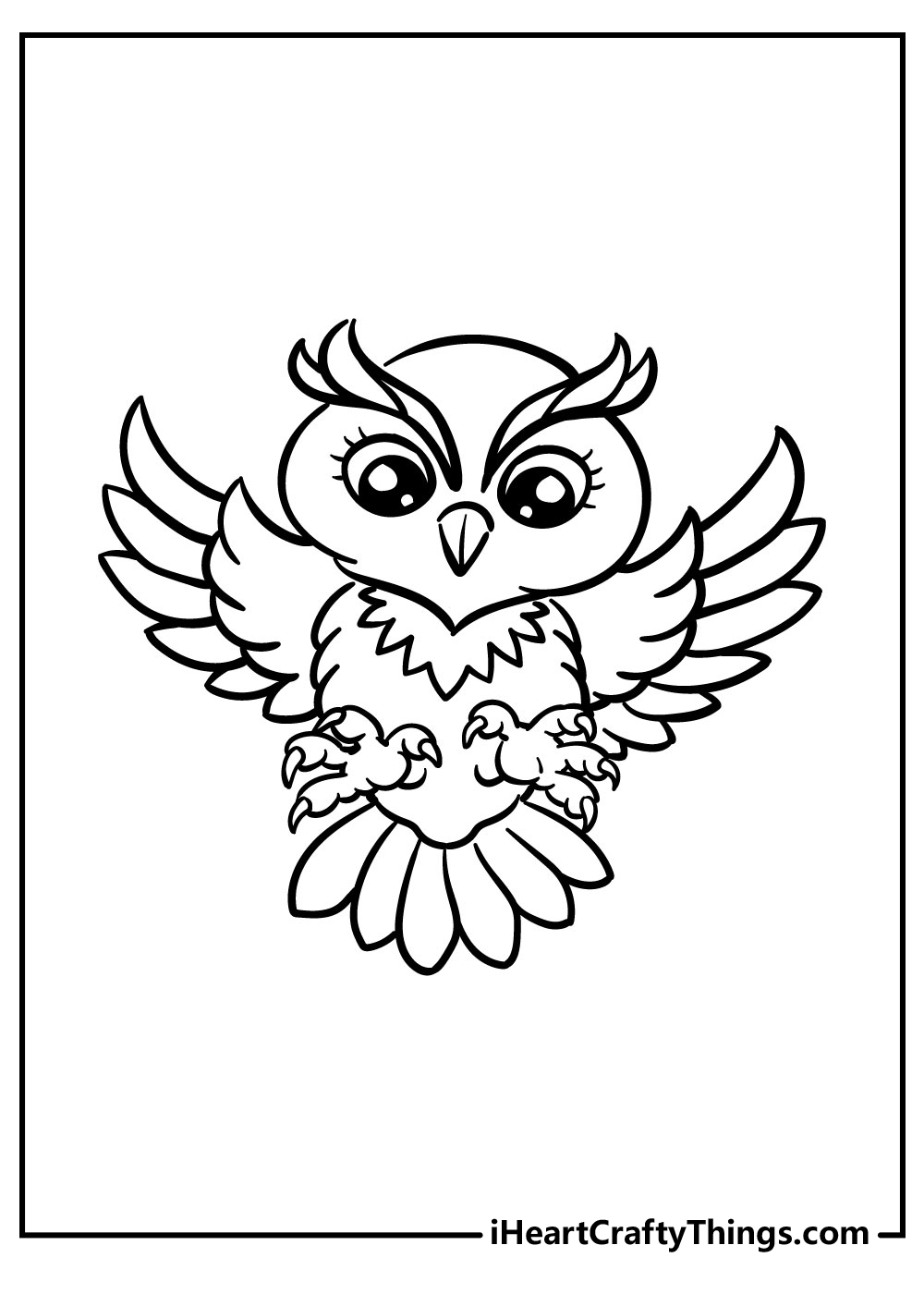 This adorable owl has its wings behind its back. Its big eyes are wide opened and the feathers above them make it look like it has very long eyebrows. Since most owls are nocturnal creatures, they have special features in their eyes that help them to see in the dark. 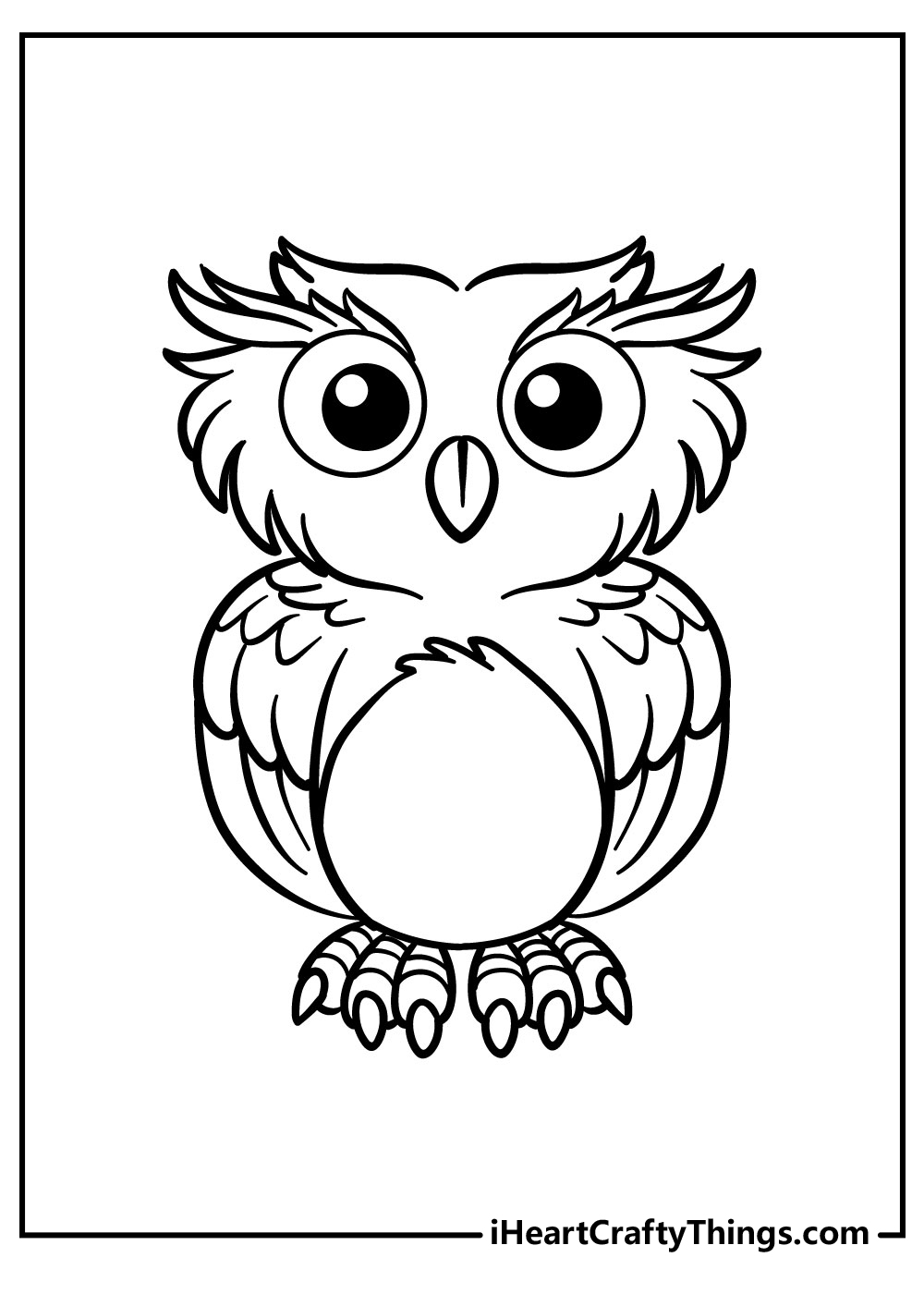 This owl coloring sheet for kids shows an owl that looks like it has hair on the top of its head that is combed down the middle. Some small owls actually live underground rather than in trees. Burrowing owls prefer to dig sandy holes in the ground to live in. Perhaps this little owl lives in burrows rather than above ground. 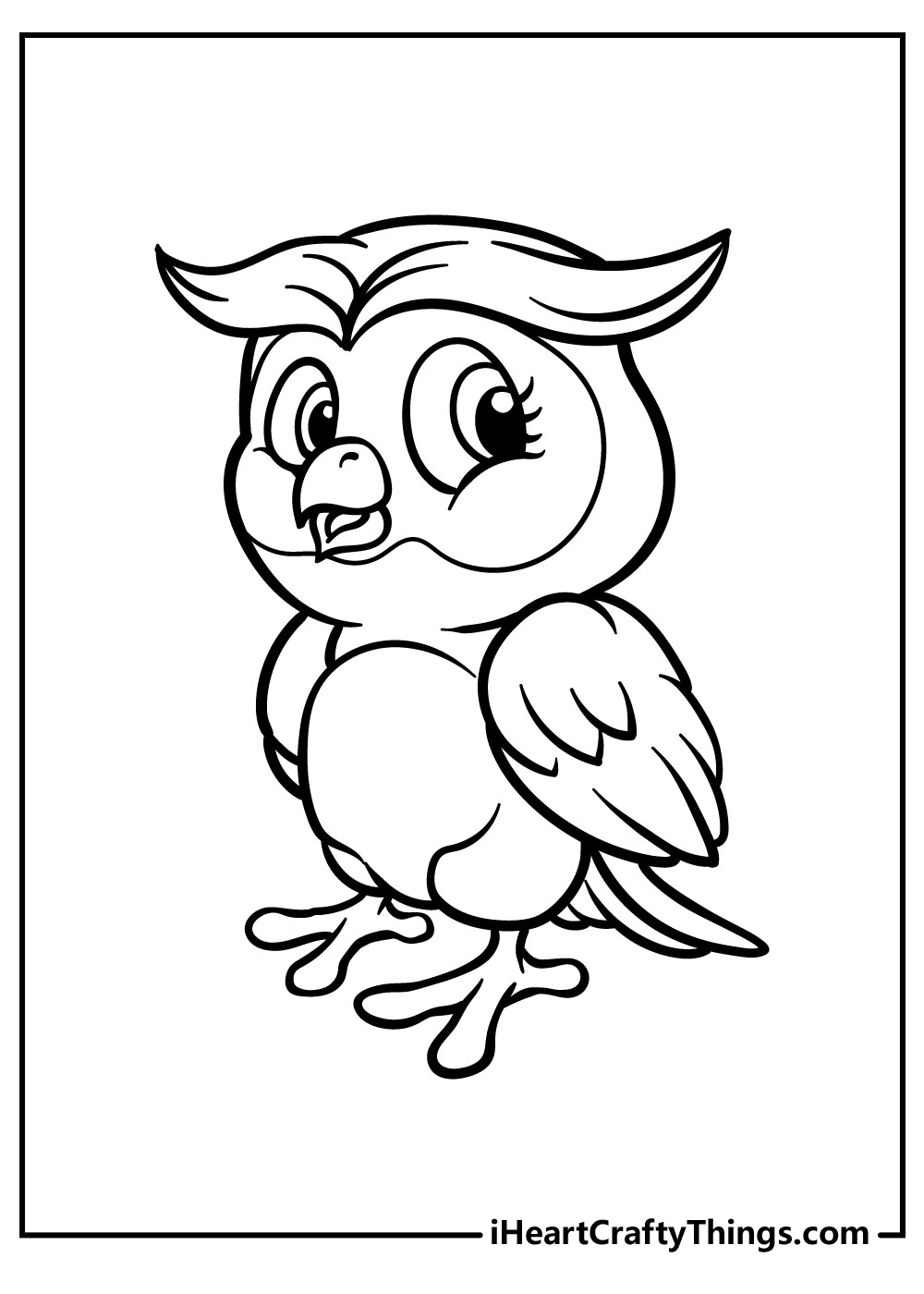 We love the cartoonish design of this owl coloring sheet. The owl flaps its big wings and looks ready to take a rest somewhere. This owl reminds us a little bit of an owl that is popular for selling sweets, the tootsie pop owl. 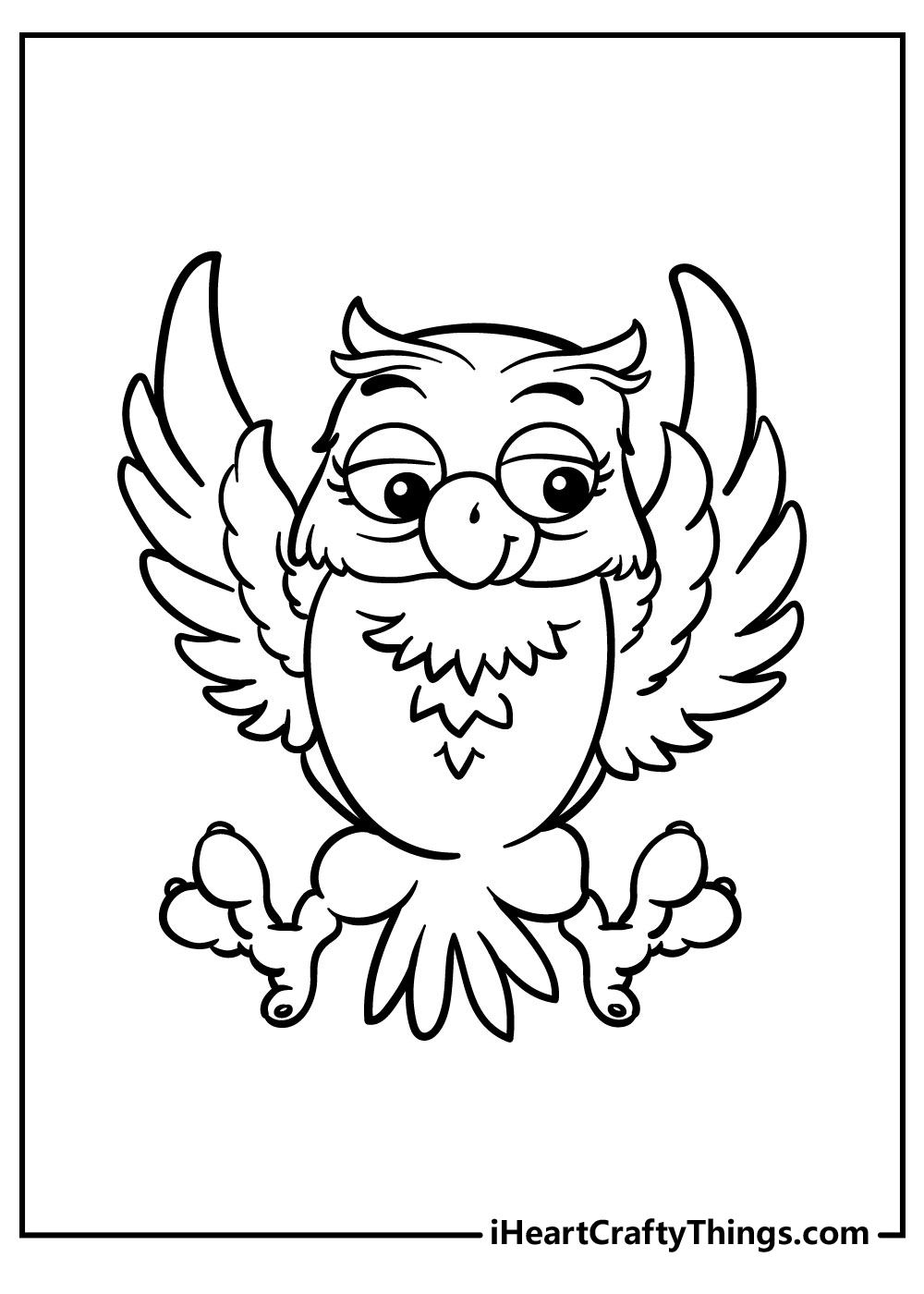 This owl printable looks a little scary. The owl looks mad and appears to have horns on its head! Even though some species are called horned owls, these creatures don’t actually have horns on their heads. Instead, they have tufts of feathers that give the creature its special name. 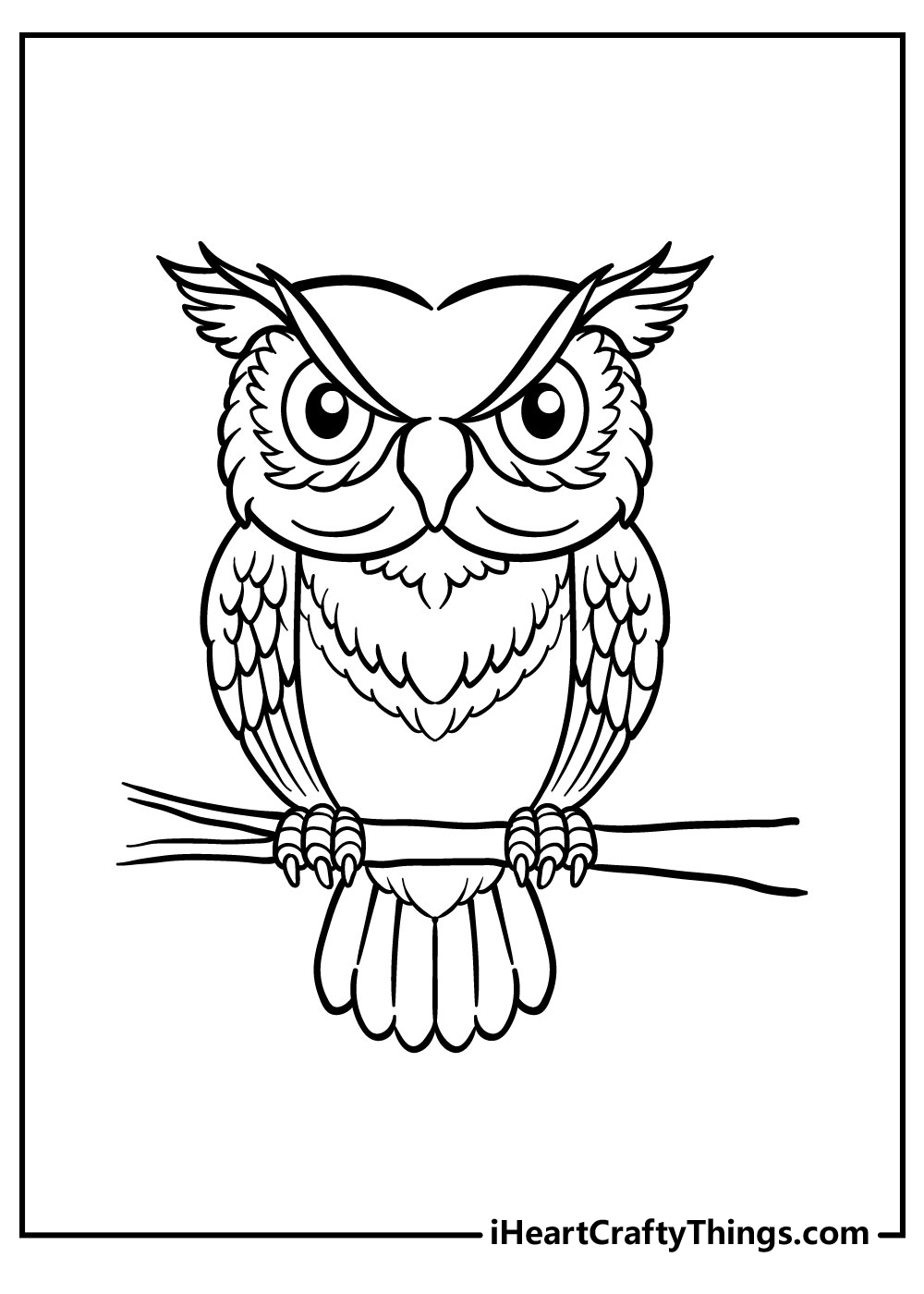 Some owls, like the one in this printable sheet, have interesting patterns around their eyes. An owl’s sense of sight is very important to these creatures. Owls can’t actually move their eyes, which is why this owl might seem to be staring at you. Instead they swivel their heads around to look at things from all angles. 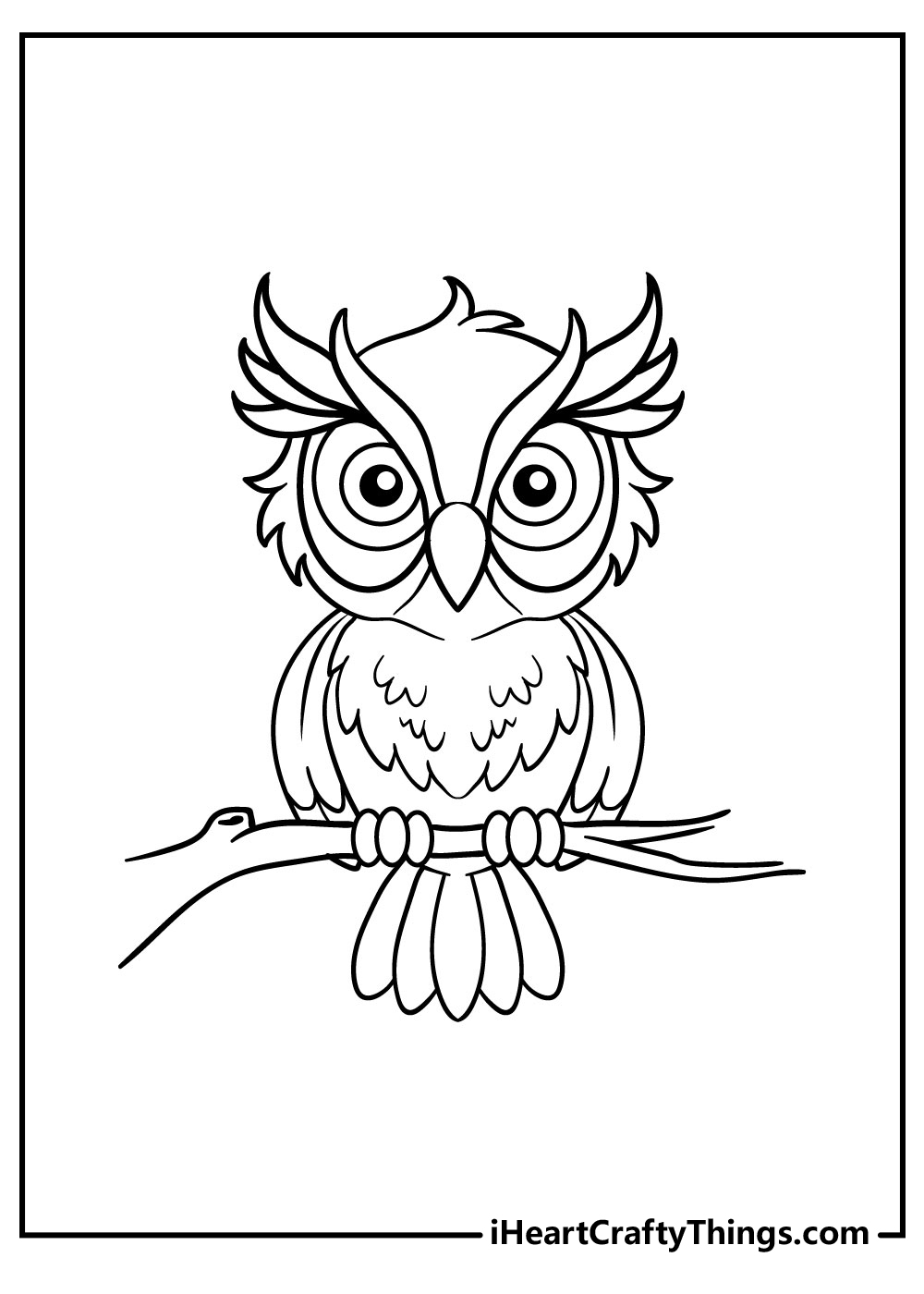 Owls need to hunt at least a couple of times a day to have enough food, although this owl coloring sheet shows an owl that looks pretty stuffed. Owls swallow their food whole and occasionally spit up the undigestible parts of their food. This owl looks like he might need to burp. 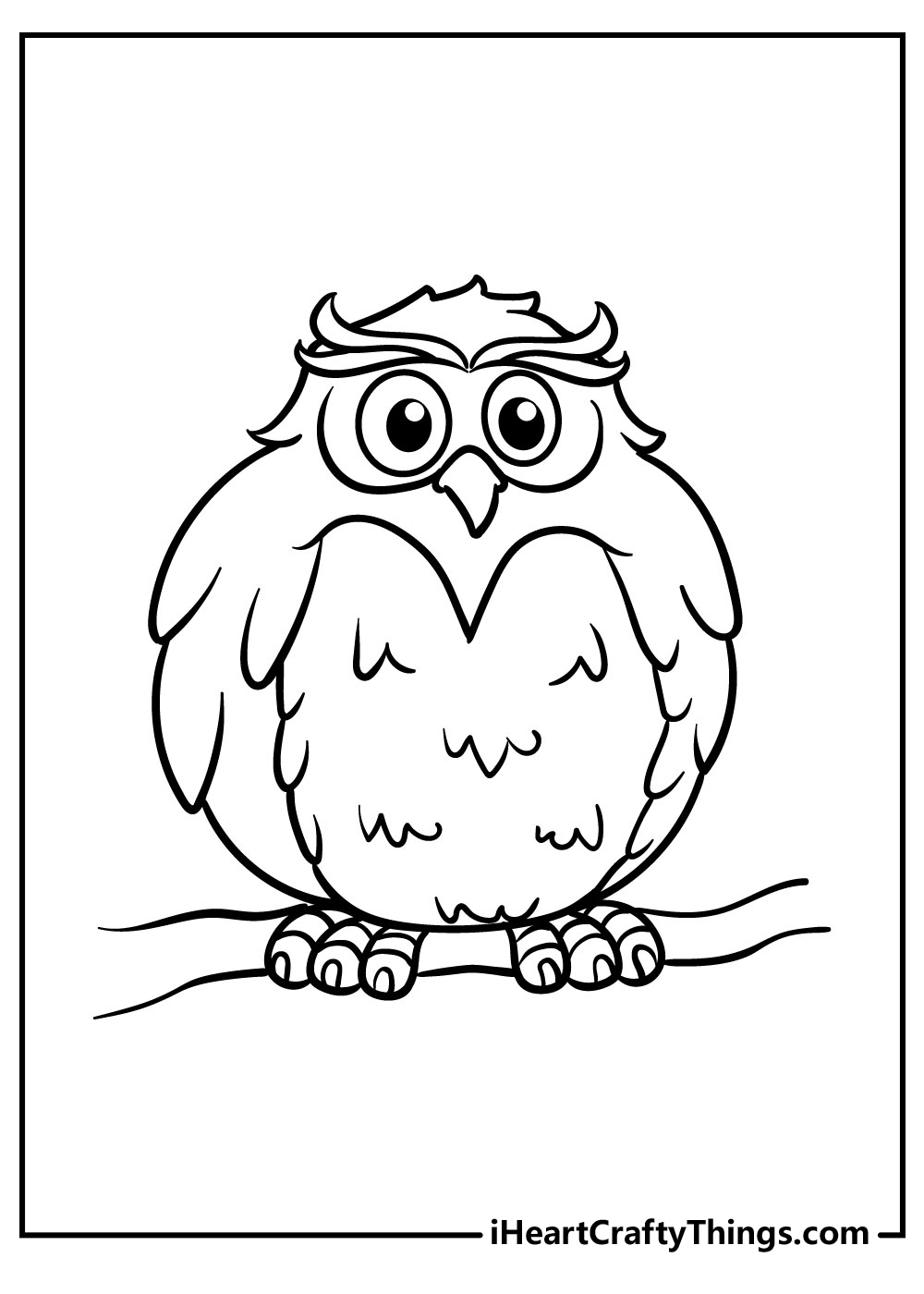 Owls are such diverse and interesting creatures. Remember all these owl coloring pages are completely free to print, so feel free to print and color as many as you want. 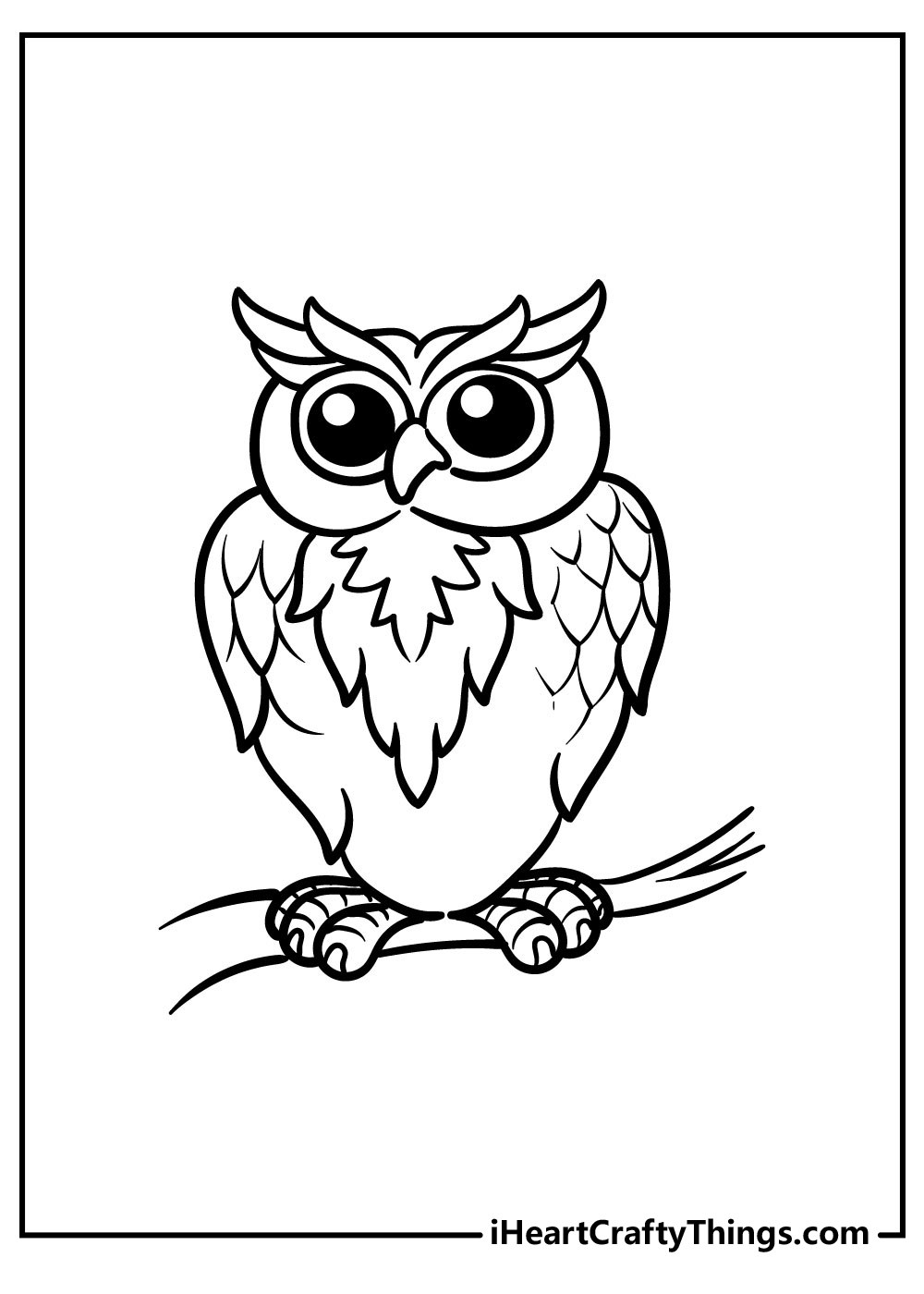 This elegant owl flaps its wings from the branch of a tree as it prepares to take flight. Unlike other birds, owls are able to be completely silent while flying because of their special feathers and velvety down. This makes them even more deadly to potential prey. 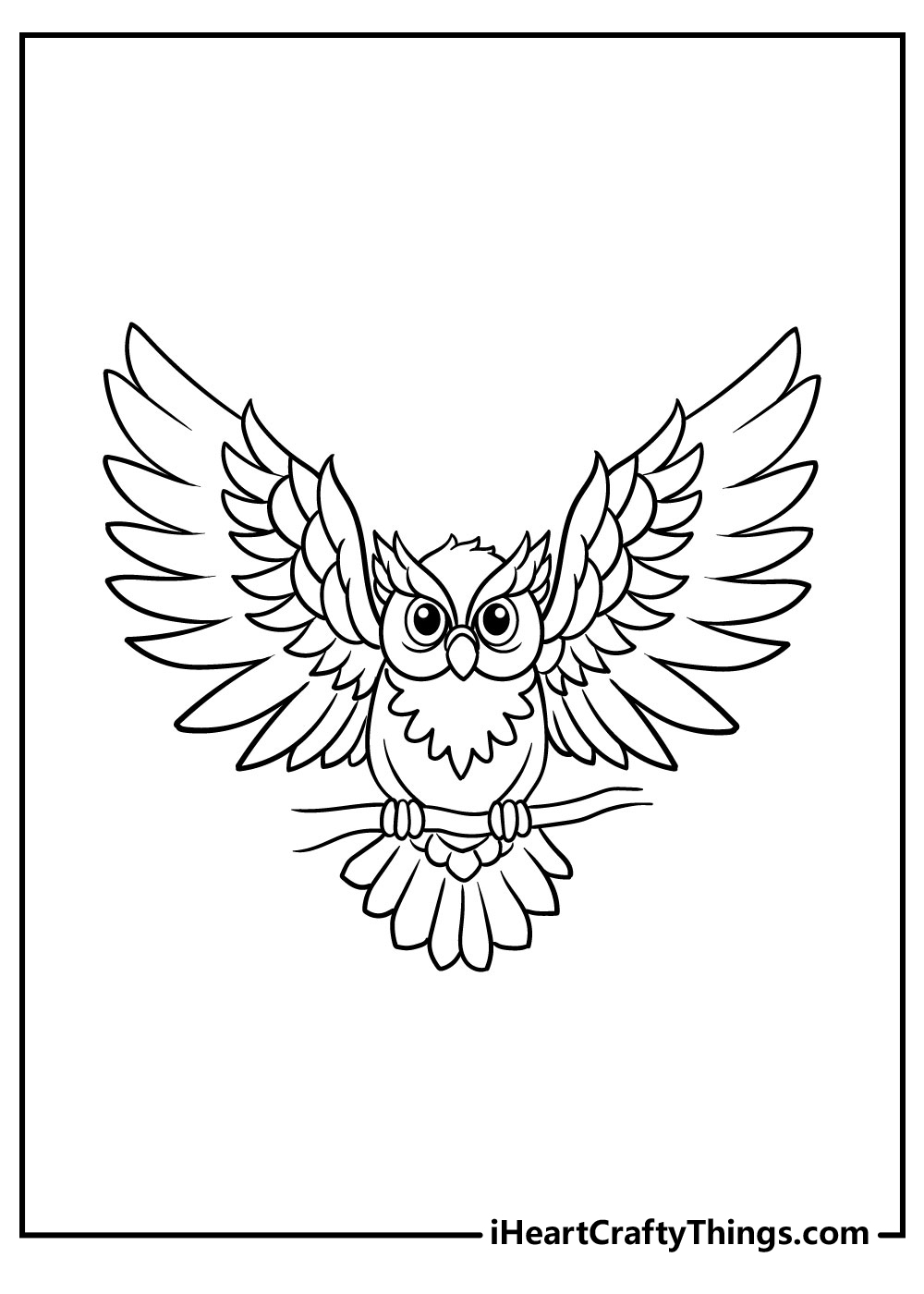 Owls in the wild really do that adorable head tilting that this printable sheet displays. This owl reminds us of the way dogs tilt their head when they are listening. However, the owl is probably doing this to help him see something since owls cannot move their eyes. 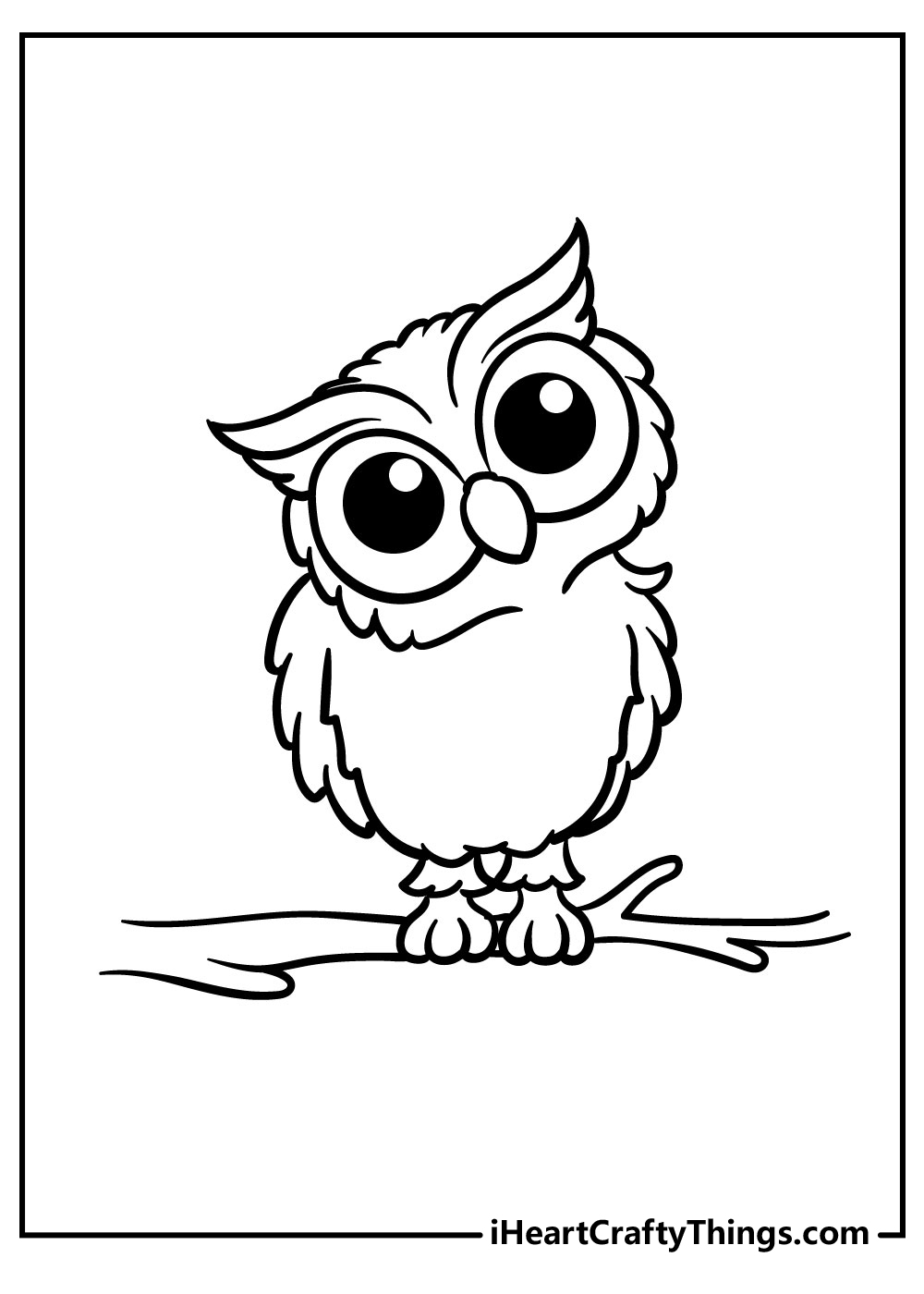 Most owls are nocturnal creatures. This means that they sleep during the day and are awake and active at night. They have special eyes that help them to see in the dark. This creative coloring page shows an owl taking off in flight underneath a full moon. 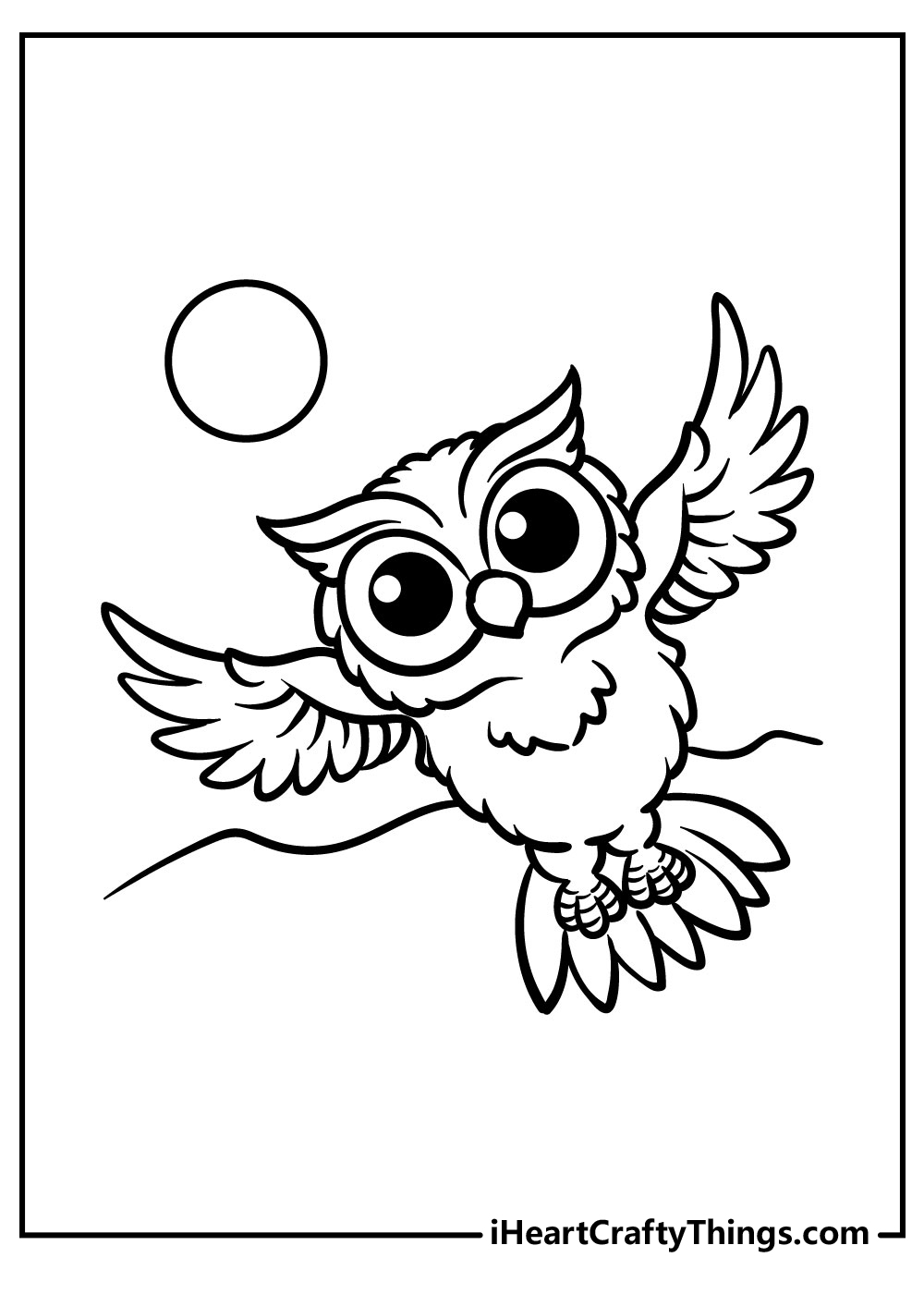 This pretty owl wears a flower in her feathers. Perhaps it is trying to blend in with the tree where it is perched. Owls are actually excellent at blending in with their surroundings. They often have feathers that match the bark of a tree or other objects that might be near where they live. 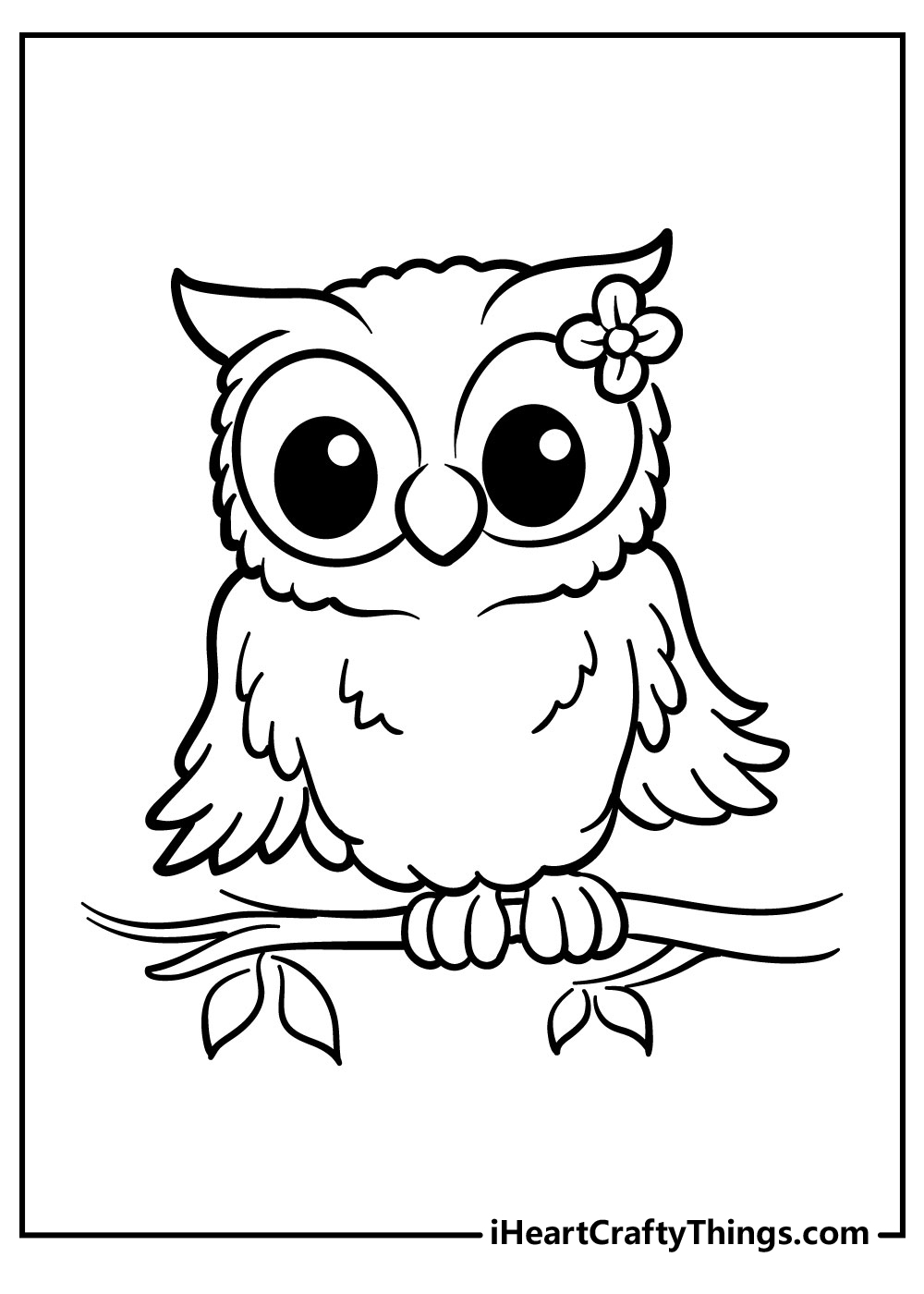 It looks like this owl has had a long night! It sits on a tree branch and its eyes begin to droop. The moon and stars are still out, but hopefully, it will be day and time for the owl to sleep soon. 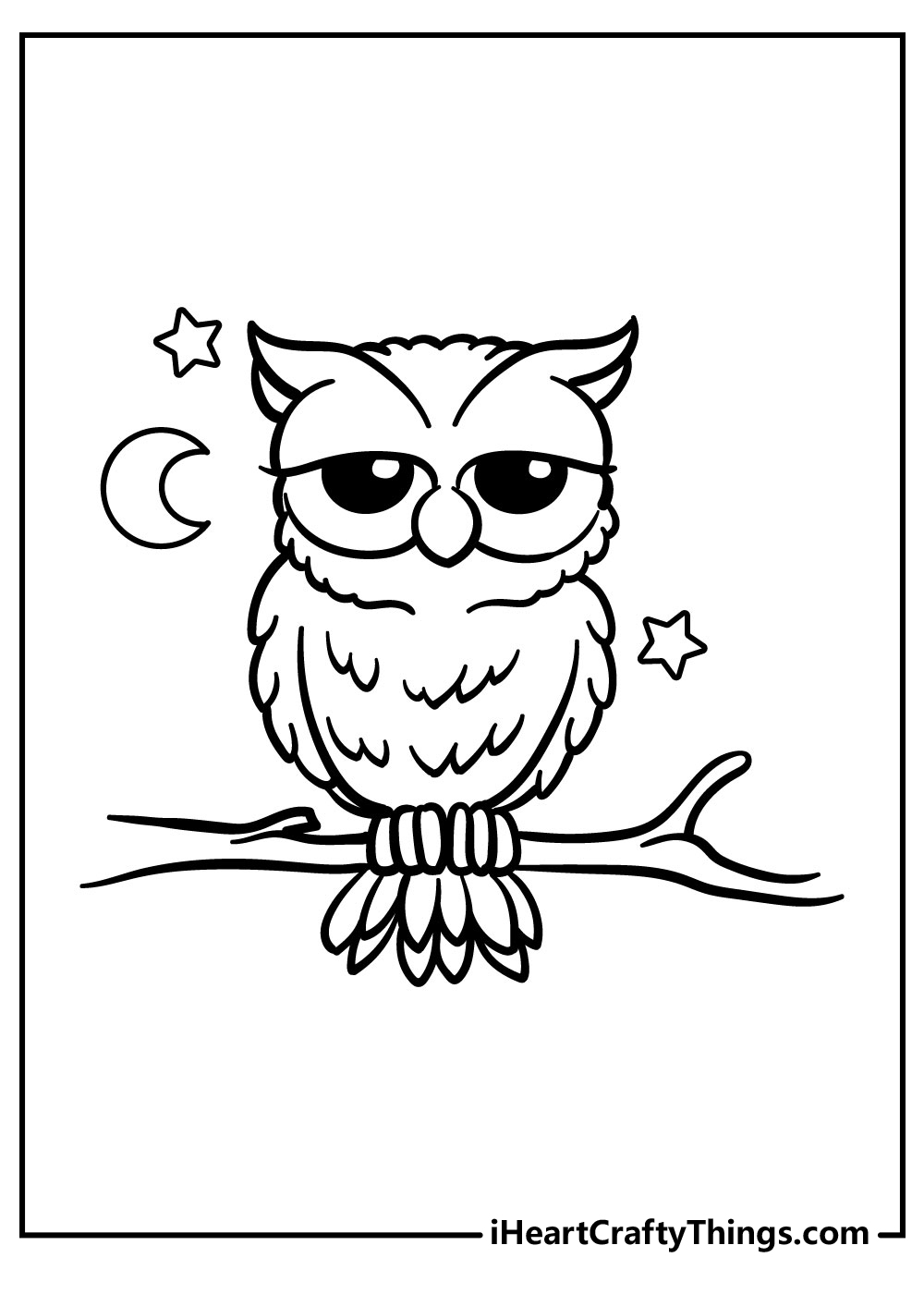 We can’t get enough of this happy-looking little owl. Did you know that the world’s smallest owl could easily fit in the palm of your hand? 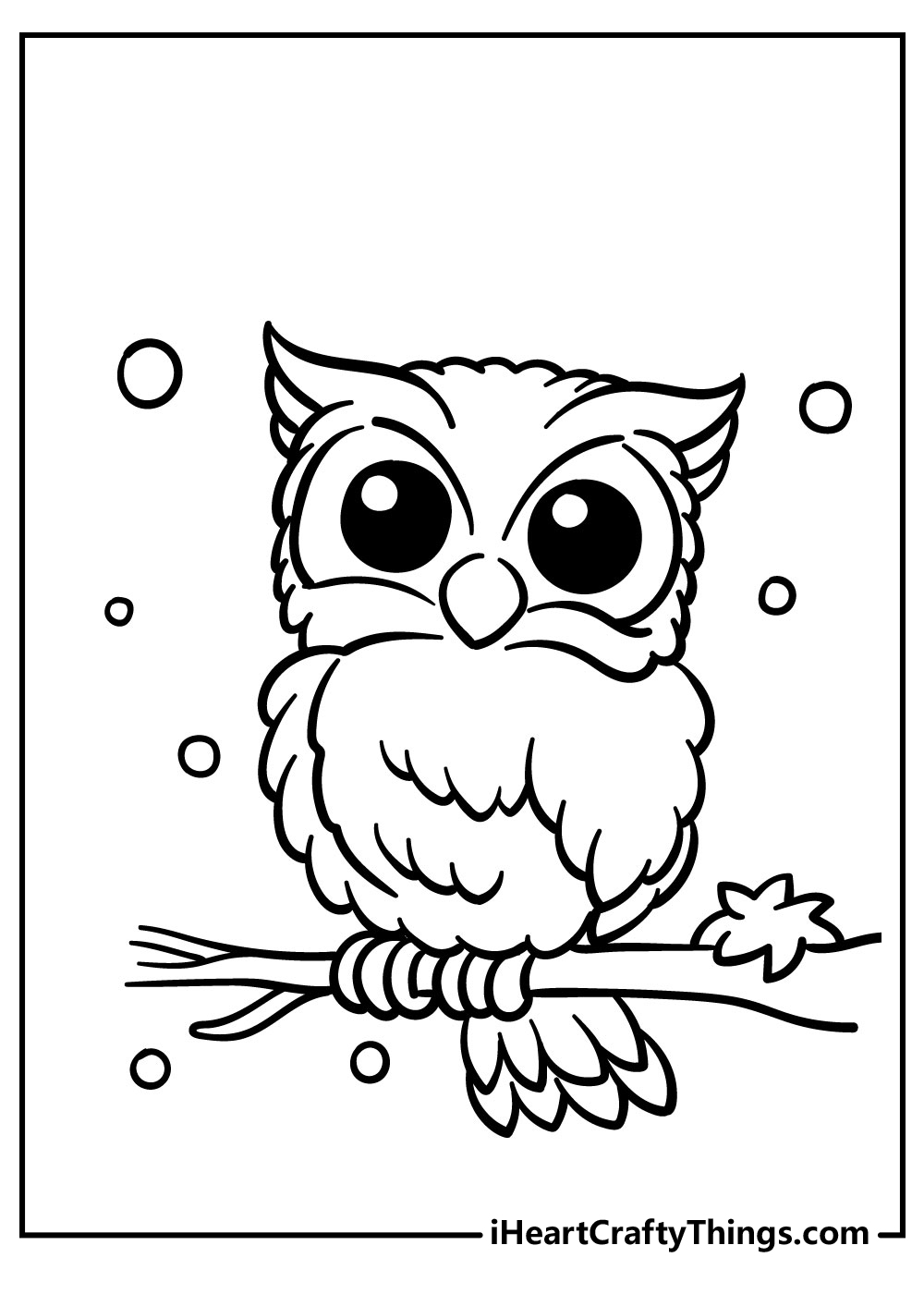 Owls definitely have a reputation for being wise and this free owl coloring page shows an owl that seems to be thinking deeply about something. 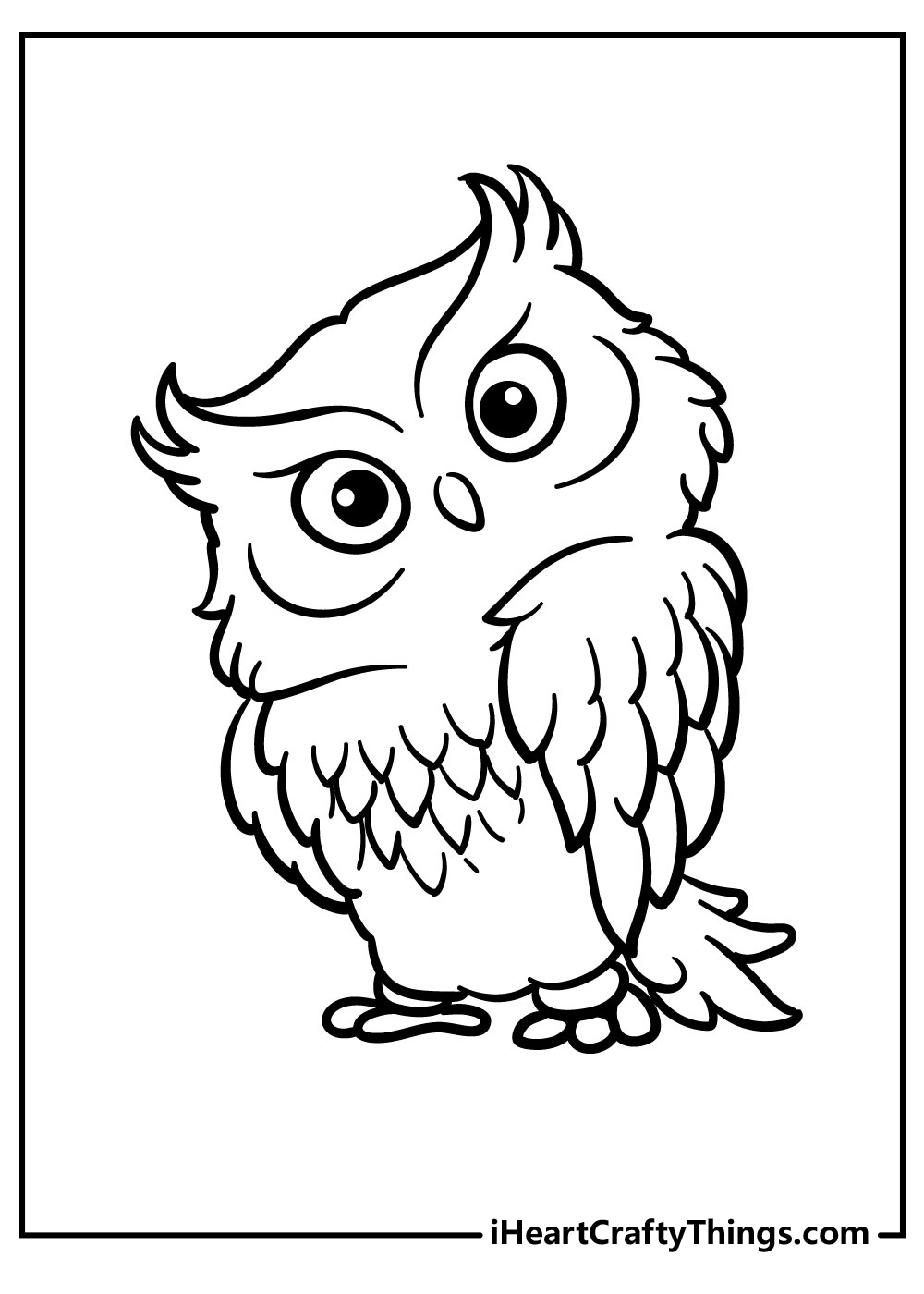 Some people believe that seeing an owl is bad luck, but this is just a superstition. Owls really prefer to stay away from humans anyway. 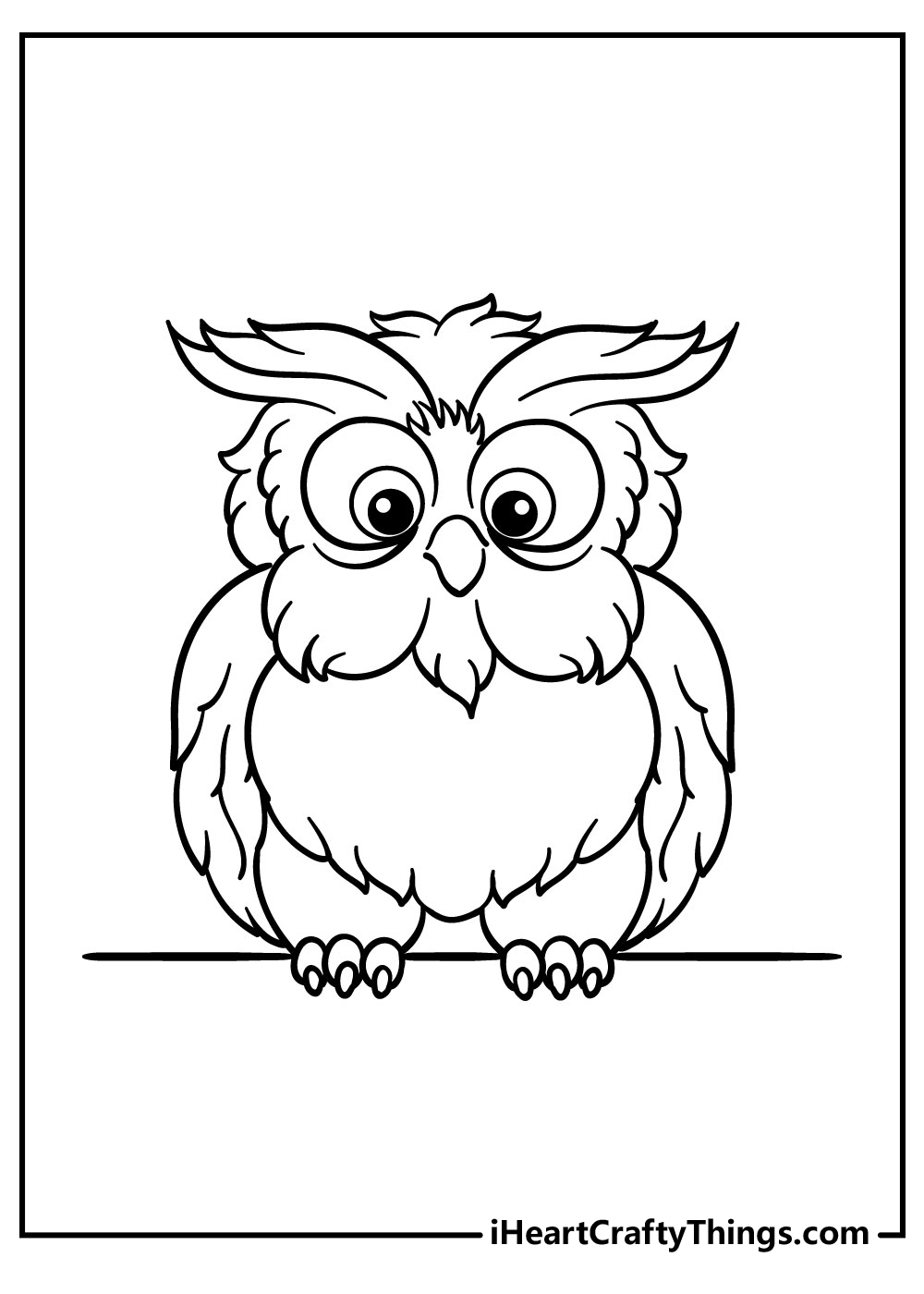 There is definitely a theme in these owl coloring pages of owls listening and watching for prey. Since owls don’t have much of a sense of smell, their eyes and ears are very important to them. 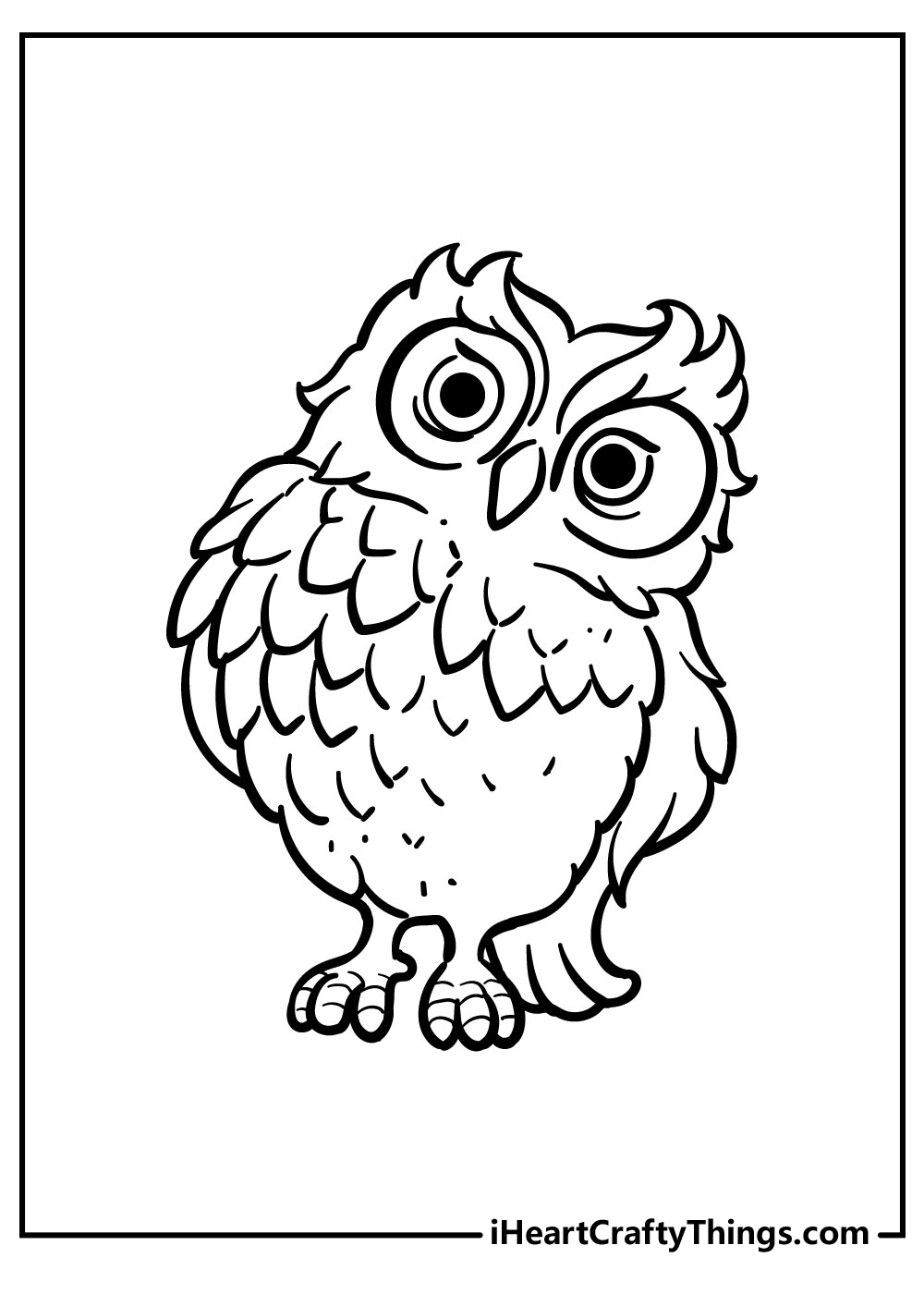 There are so many owl coloring pages for you to choose from. Did you know that a group of owls is called a parliament? 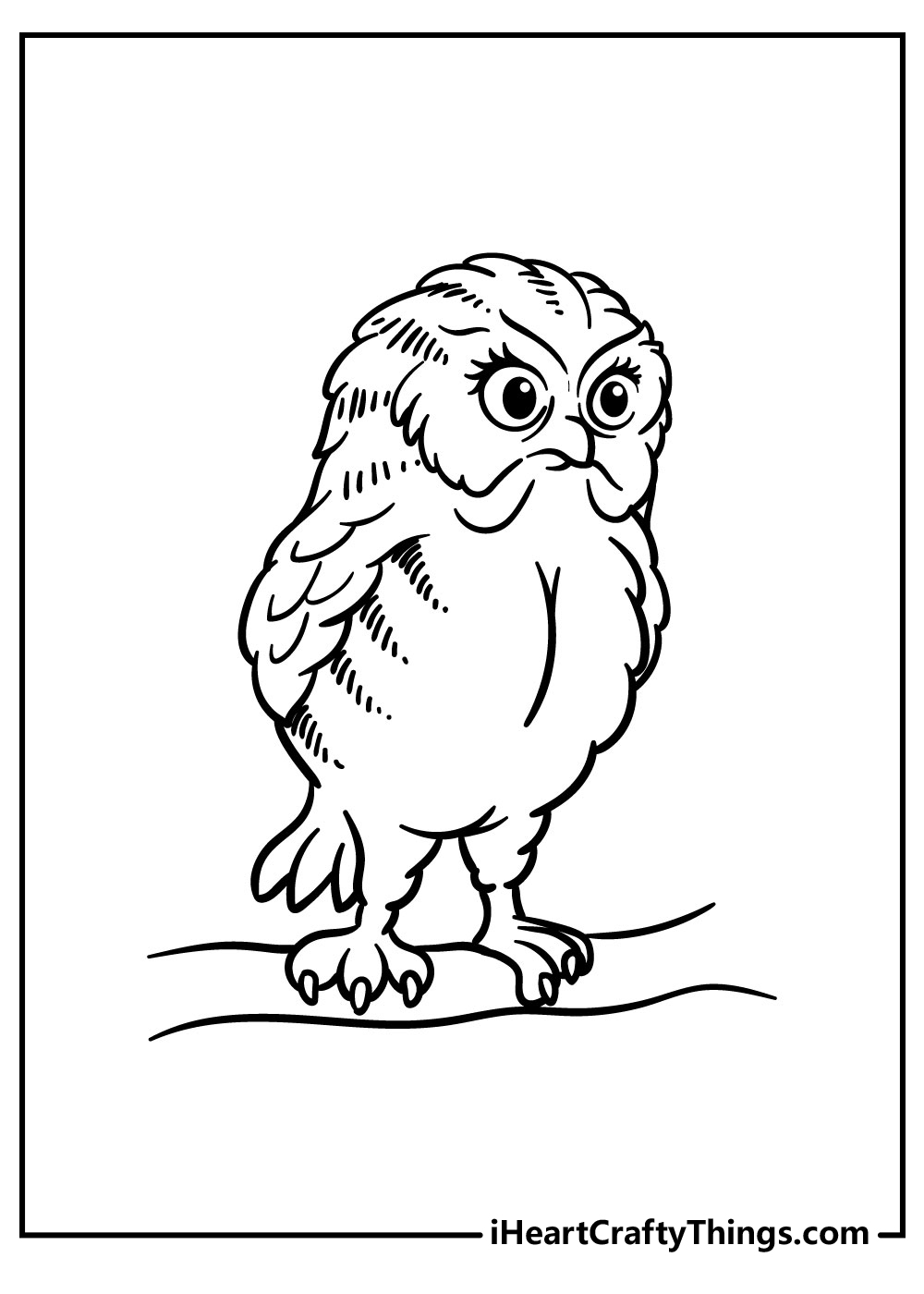 This little owl has an especially fluffy chest and big feathered horns. We love the owl’s long eyelashes. 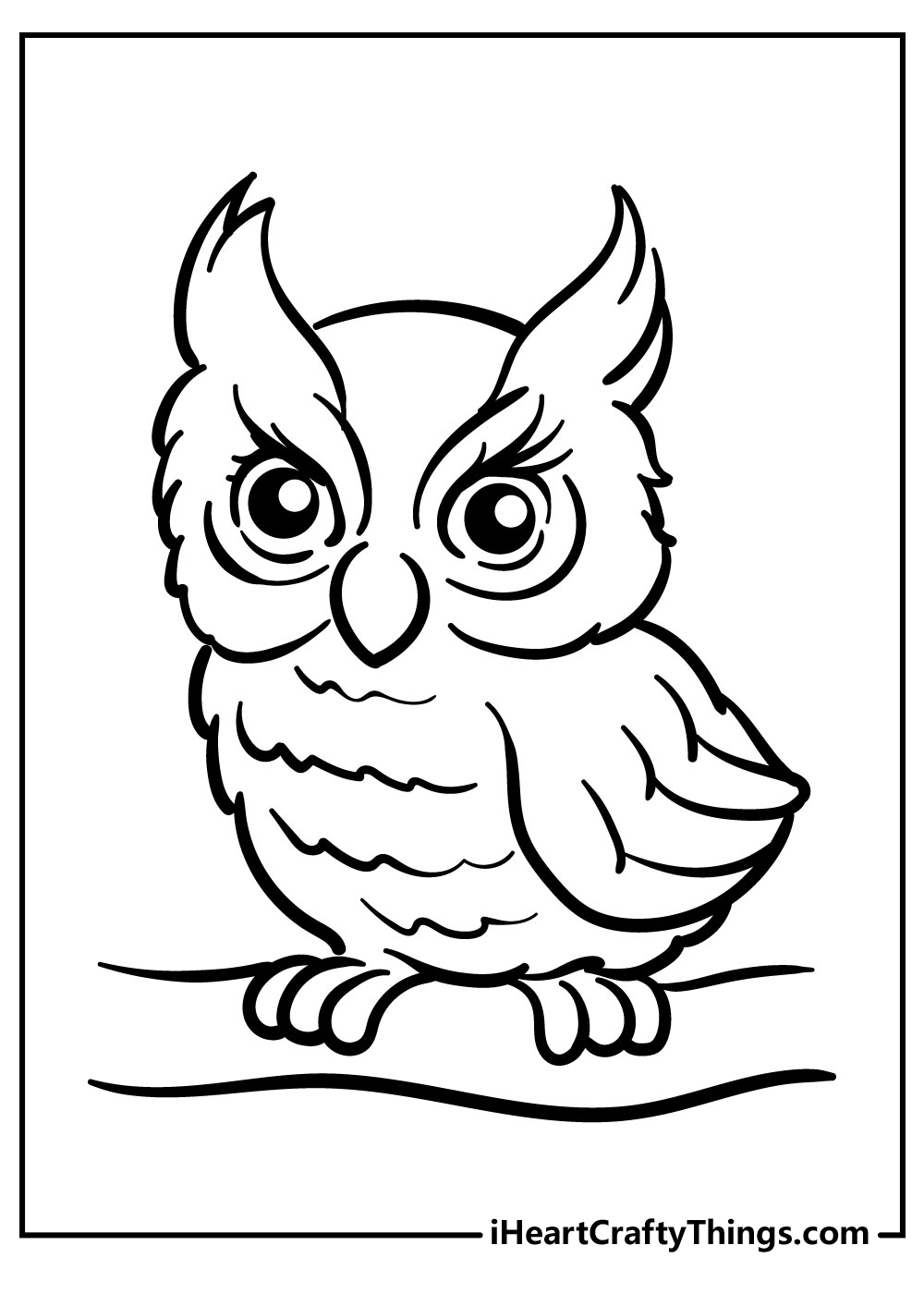 Our coloring page designers seem to love seeing owls with their heads tilted to one side. We love this one of a curious-looking owl with thick fluffy feathers. Remember – when you finish your owl coloring pages, post your finished pictures onto our Facebook page. Every month we pick the best uploads and the winner gets a special surprise! 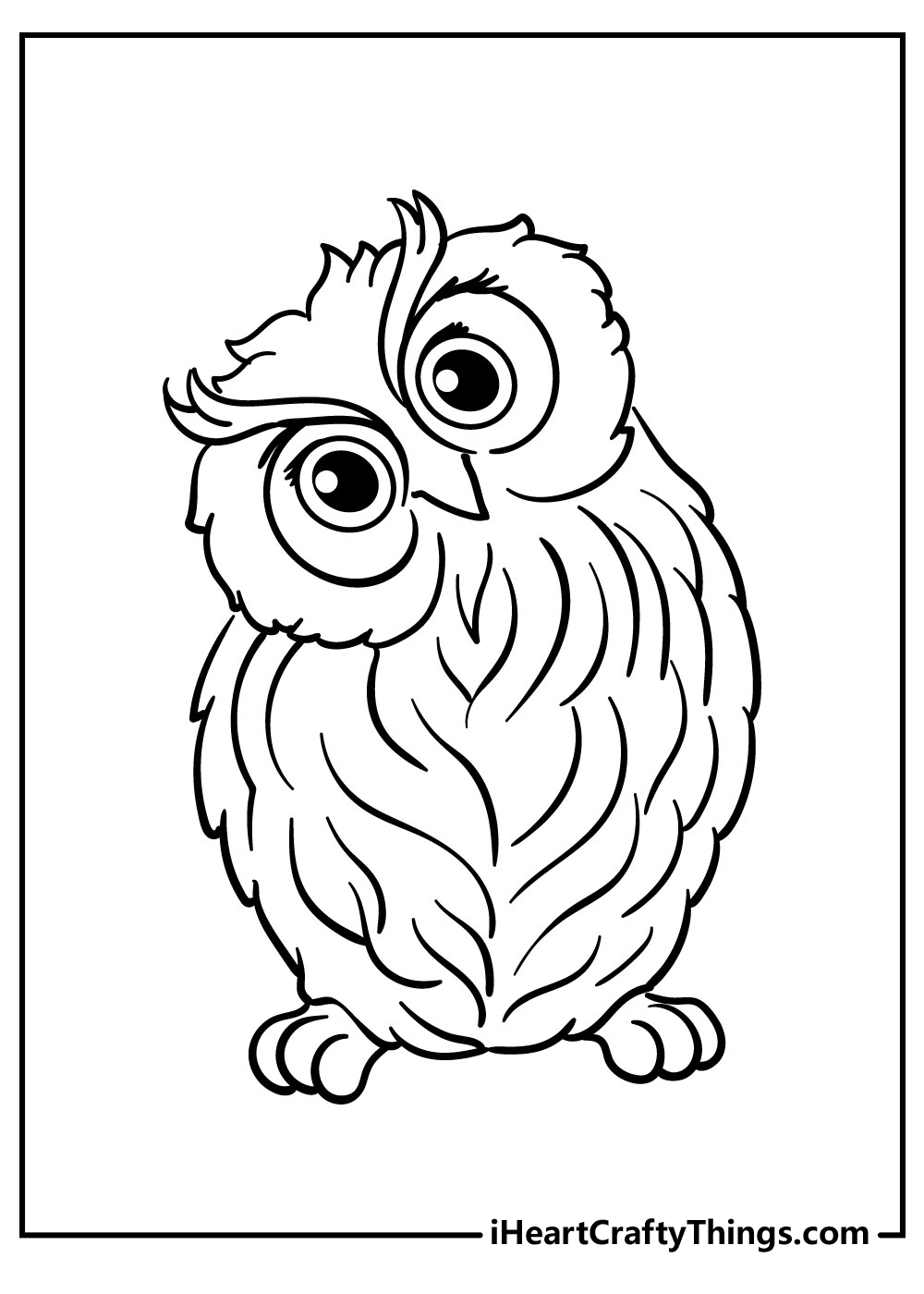 This owl reminds us of the cartoon owl from Winnie the Pooh. This character is known for his wisdom and intellectual abilities. The owl raises one eyebrow in an inquisitive manner and seems to be pondering something deeply. 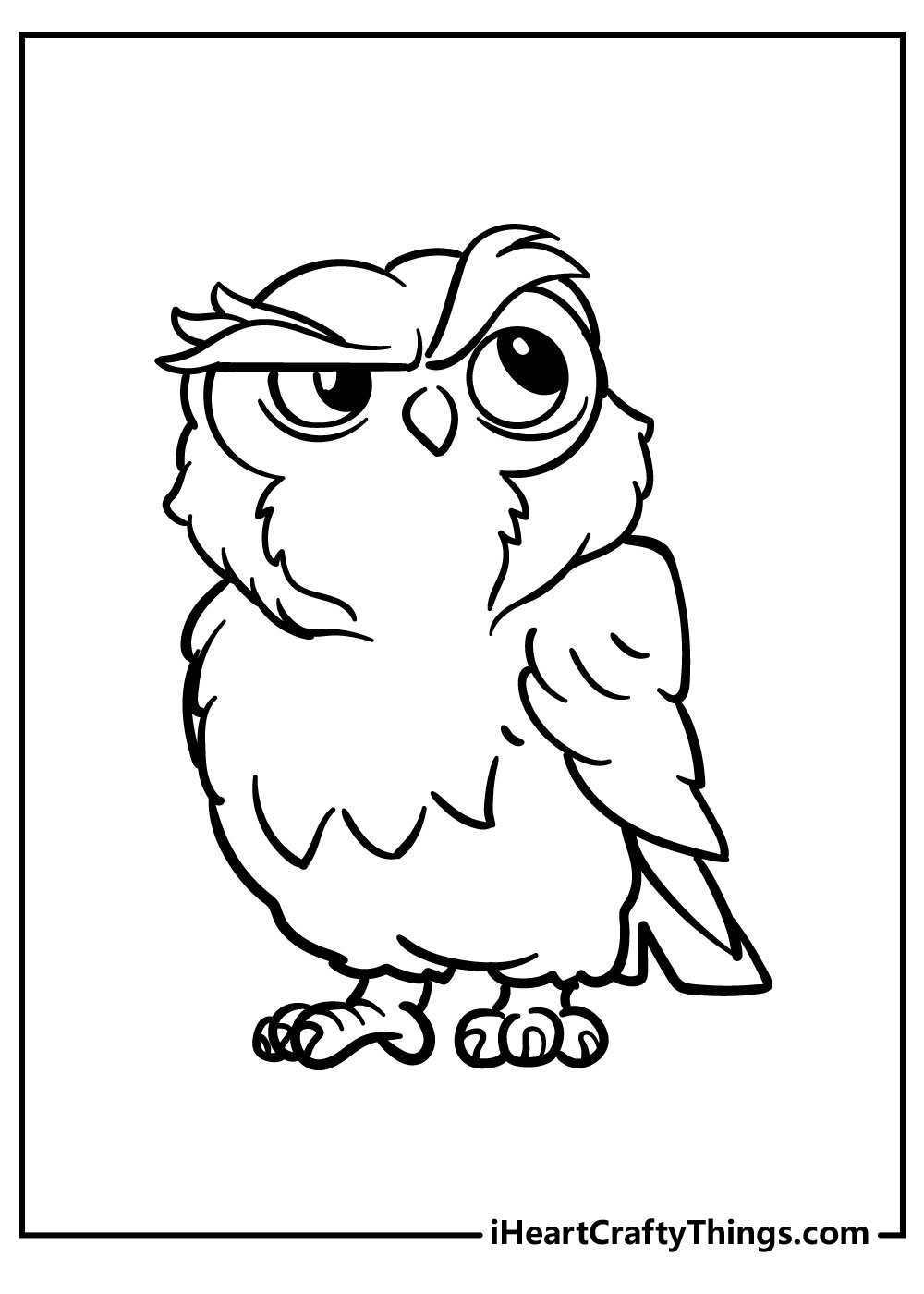 This owl printable sheet shows a little owl that appears to be puffing his chest up. It leans to the side and winks at someone. Perhaps it is about to pull a trick. 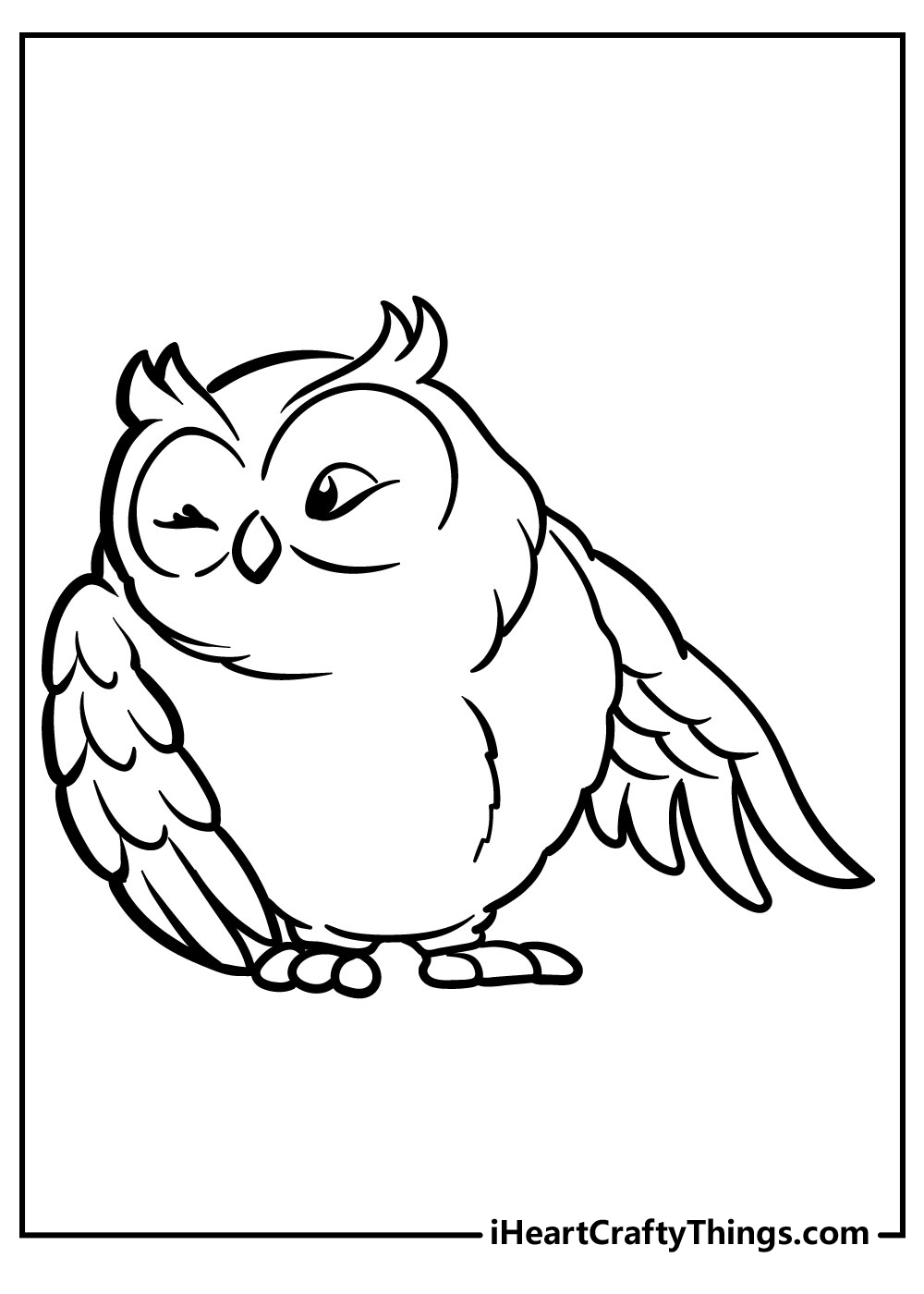 The term “night owl” is used to describe people who prefer the late night to the mornings. We love the imagination in this coloring page of a “night owl” with wide-opened eyes who appears to be sipping on a cut of coffee. 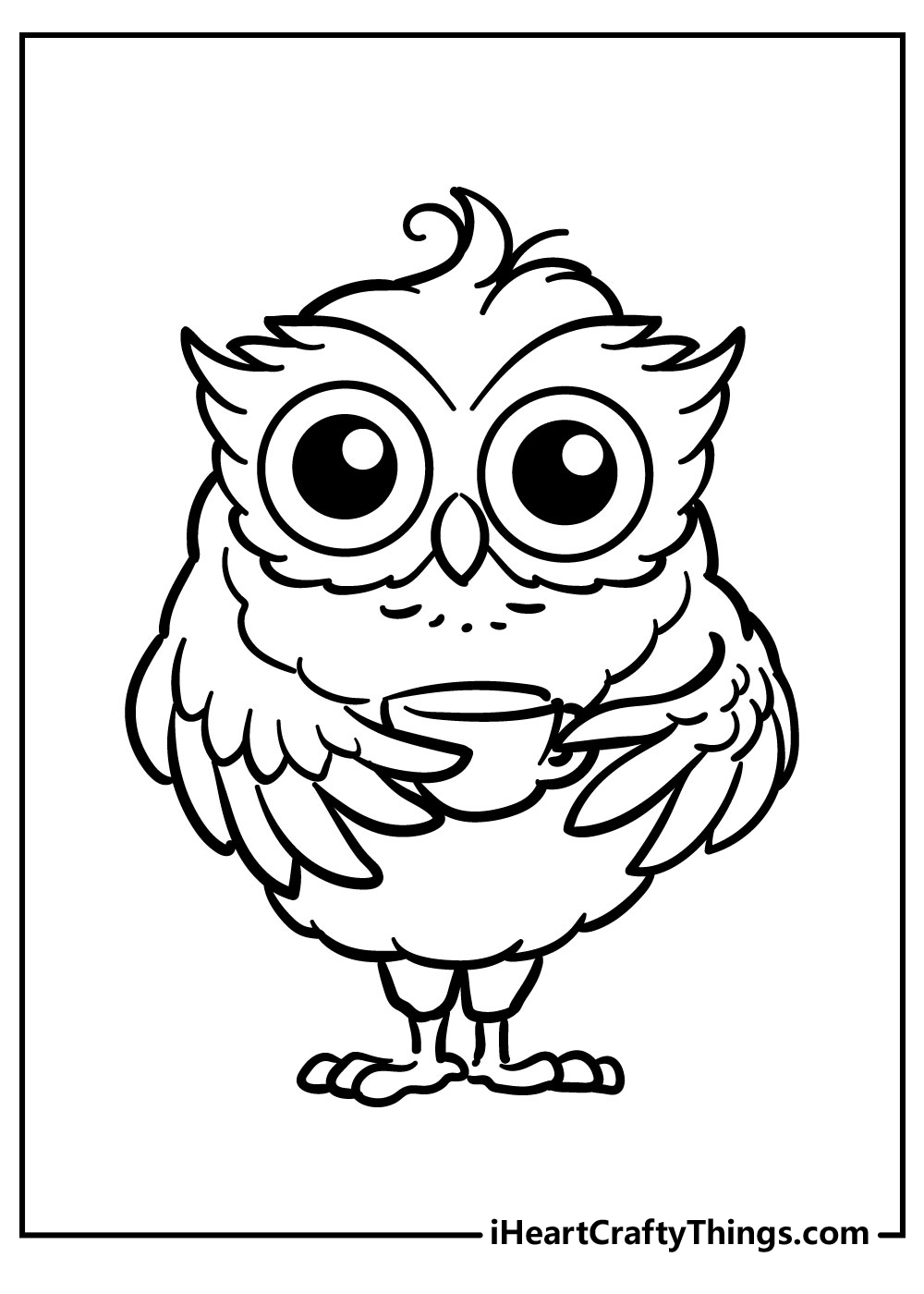 This tiny owl looks like it is only a baby. It has enormous eyes and a little swirly tuft of feathers on the top of its head. It holds his wings shyly next to his body. Did you know that a baby owl is called an owlet? 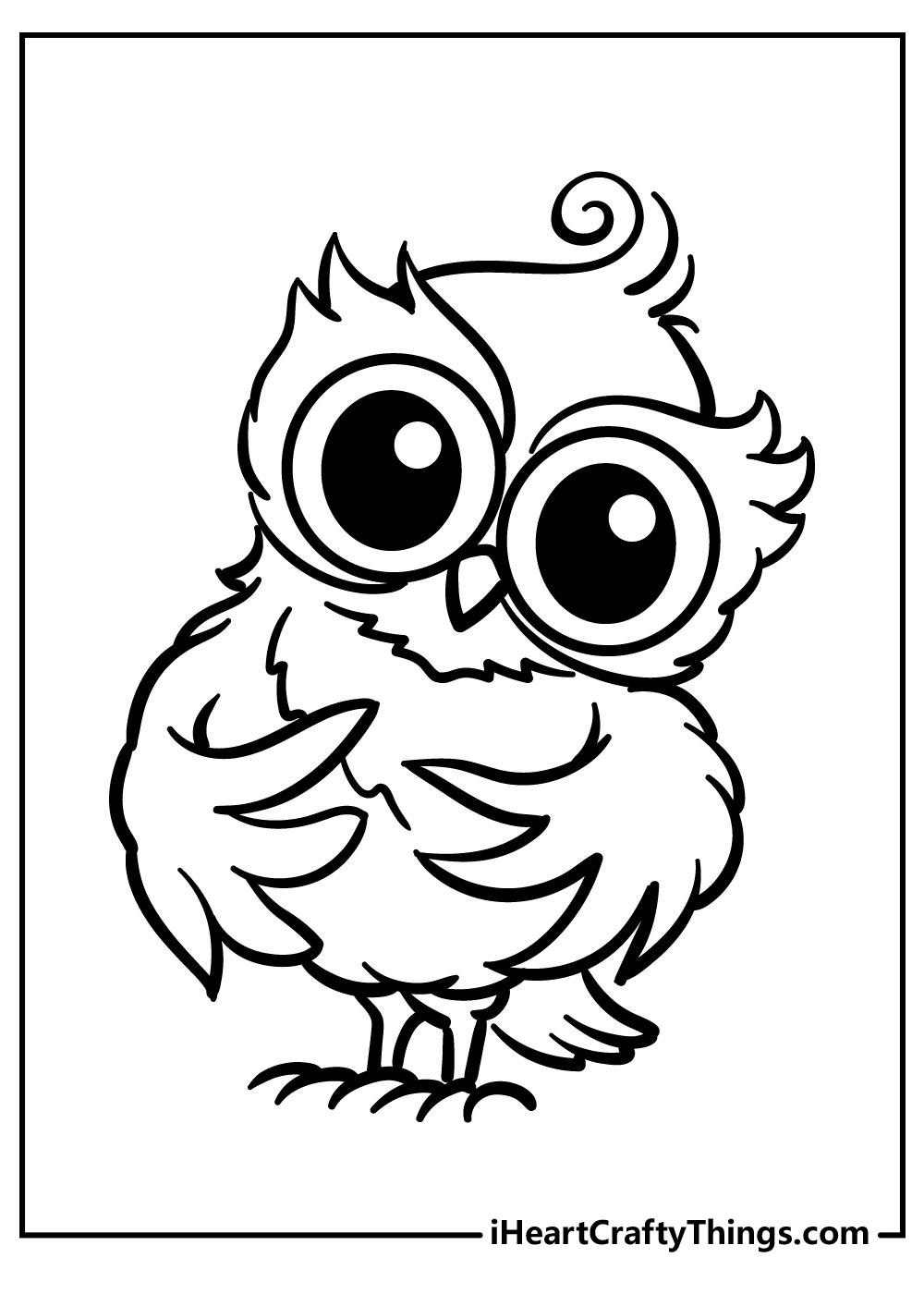 Another owl is enjoying a cup of coffee or tea. Perhaps it will give him the energy to stay up all night hunting for mice and other food. It looks pretty wide awake. 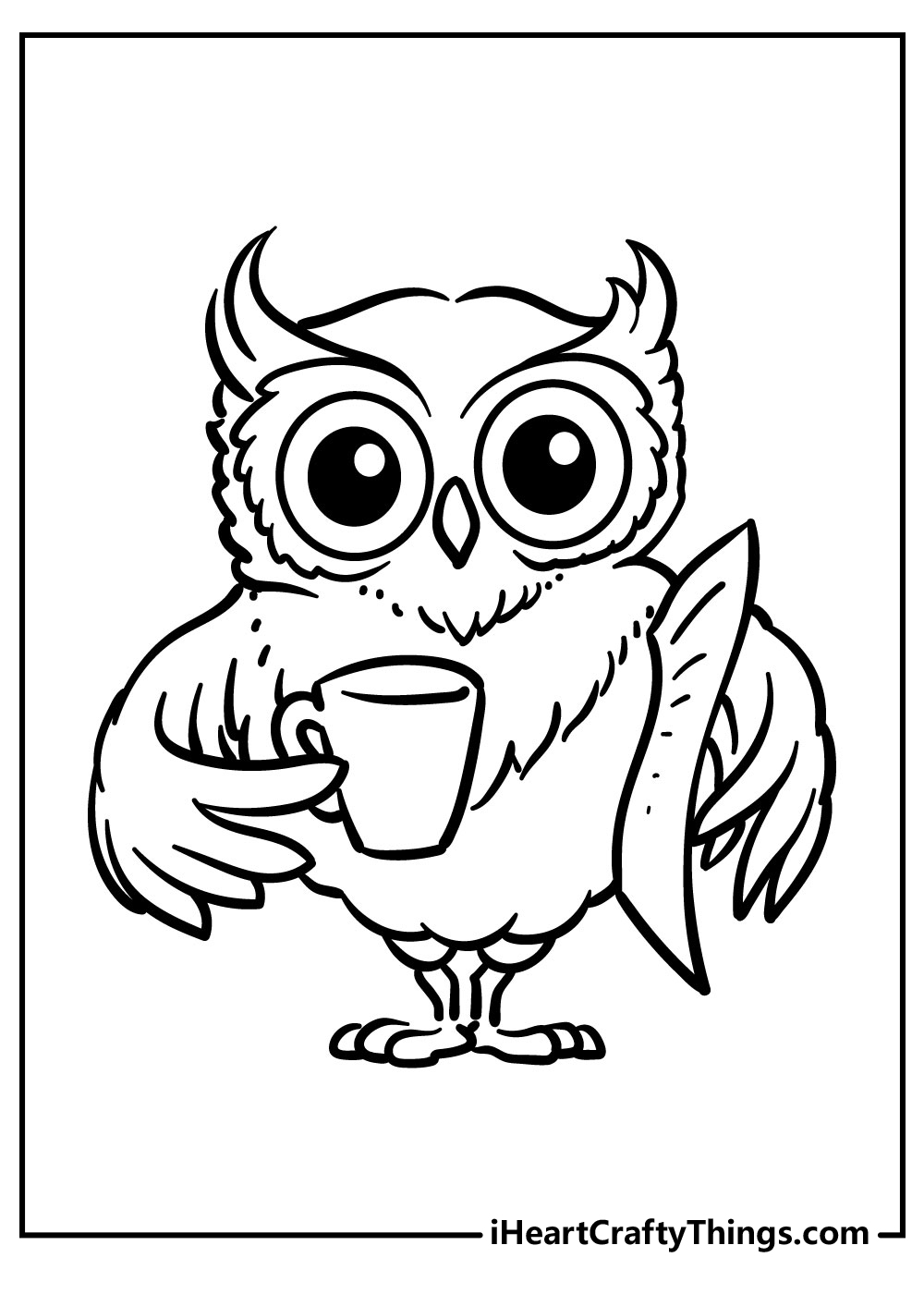 Remember – we are constantly updating our catalog of coloring pages and printable sheets. Keep checking back to see which new pages have been uploaded and which new characters and animals are ready for you to print and color. There is so much more to come.

We hope you enjoyed using your creativity to bring to life these fascinating owls. Don’t forget to post a photo of your finished owl coloring pages on our Facebook page. We can’t wait to see what you’ll come up with next. 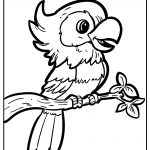 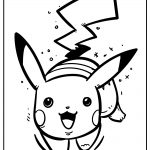