There are many different superheroes in comics, film and other media, but the Ninja Turtles have to be some of the most unique.

These mutant turtles have distinct personalities and save the day using their martial arts skills and powers of teamwork.

These free Ninja Turtles coloring pages for kids are here to celebrate this iconic turtle quartet!

There are lots of cool poses and scenarios contained here, and they are all free for you to enjoy as much as you like.

Whether you color them all or choose some favorites, we know you will have an awesome time with these super cool superheroes!

The Ninja Turtles have many aspects about them that have become quite well-known, and one of them is that they live and train in the sewers.

This first page in our collection of free Ninja Turtles coloring pages for kids shows one of the turtles emerging from a manhole.

There is a D on his belt, and that suggests that this is the staff-wielding Donatello.

That means that his gear will take on a purple color scheme, but you could always go for a different one if you prefer! 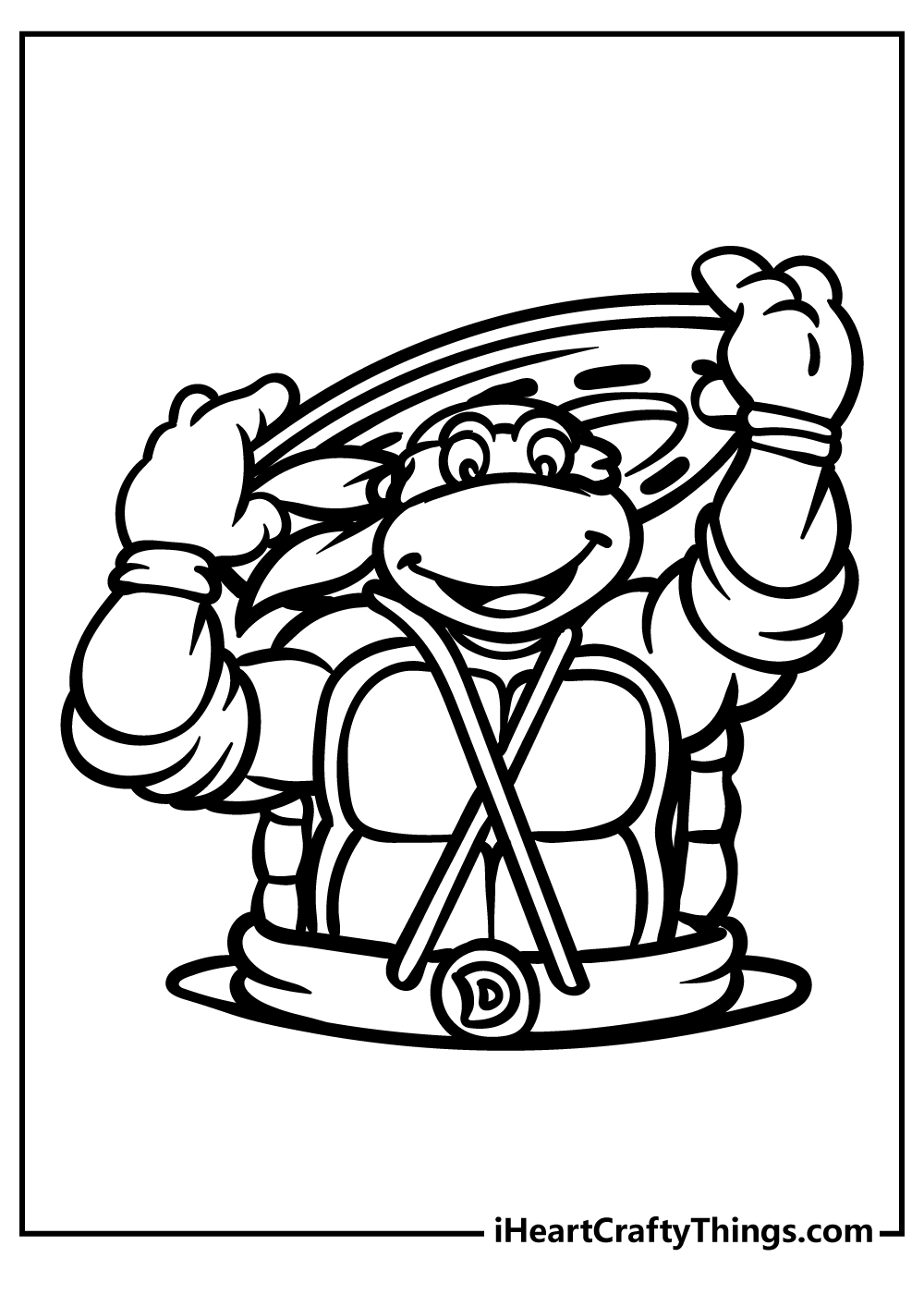 Donatello is back and showing off his signature weapon in this next image. His bo-staff is a weapon he is very good at using, and here he seems to be performing some kind of move with it.

Do you think he is in a ninja fight or is he maybe training? You could draw in some extra details to show us what you think! 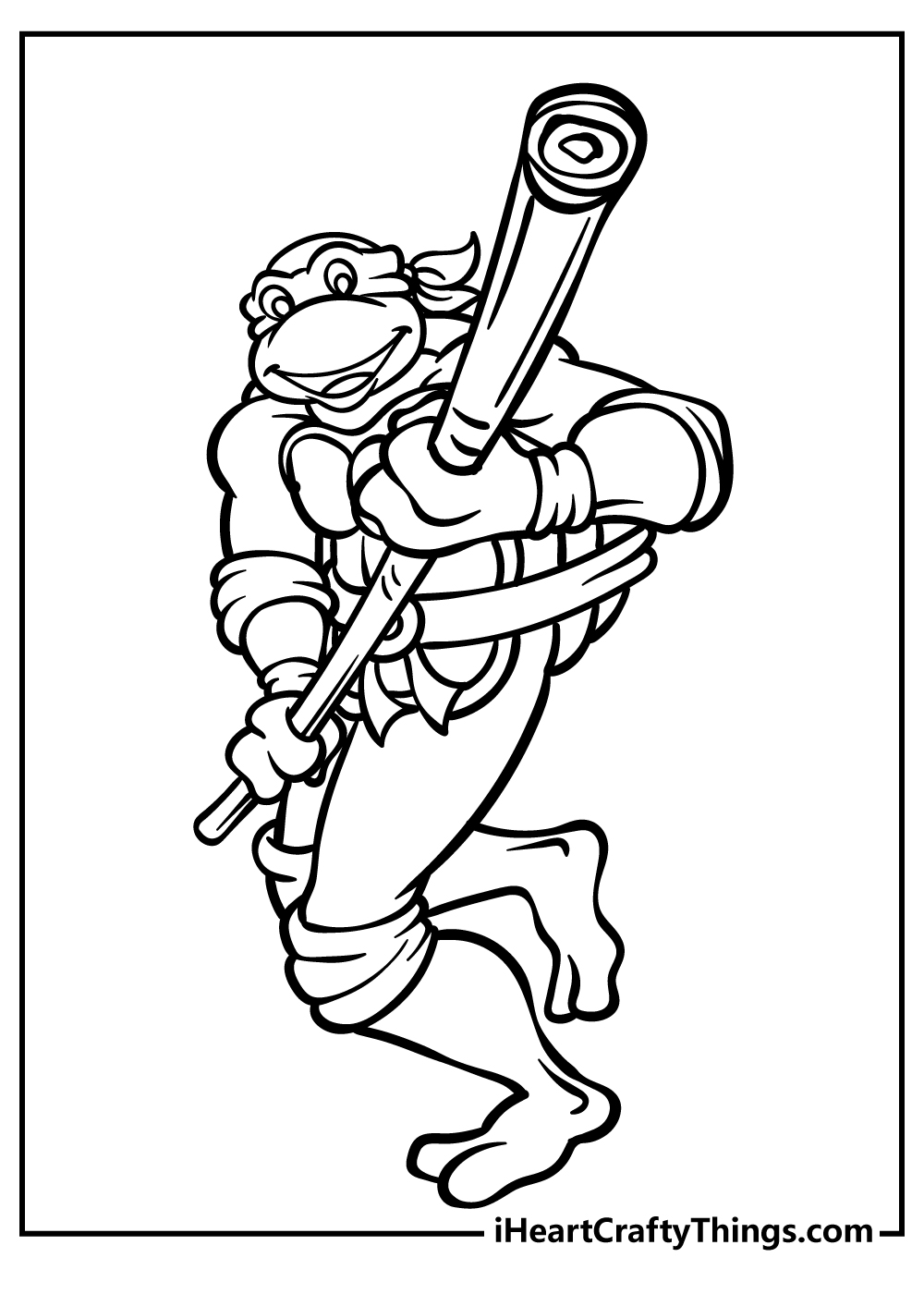 We have a close-up of one of the Ninja Turtles in this next image!

The good news here is that this could be any of the Ninja Turtles, or you could even create a new turtle character by using a unique color!

If you go for some of the usual turtles, then you could draw in some pictures of their weapons into the background for a fun extra touch. 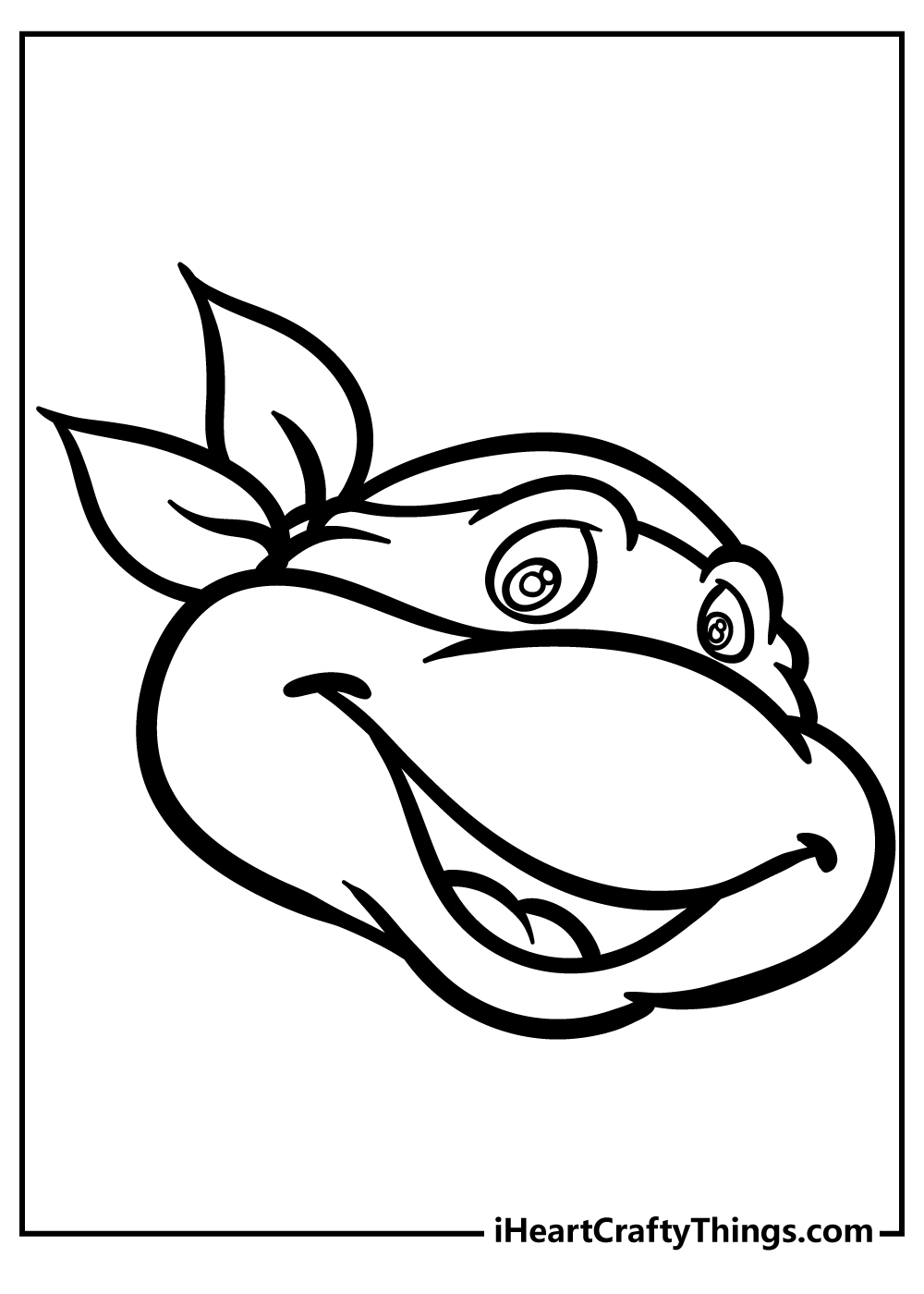 The leader of the Ninja Turtles, Leonardo, is looking fierce with his trademark katanas in this image!

Leonardo has a blue color scheme to his gear, so you can go for that if you want him to look accurate.

He seems to be in a battle here, so we would keep all of the colors bright and intense to highlight this fact. 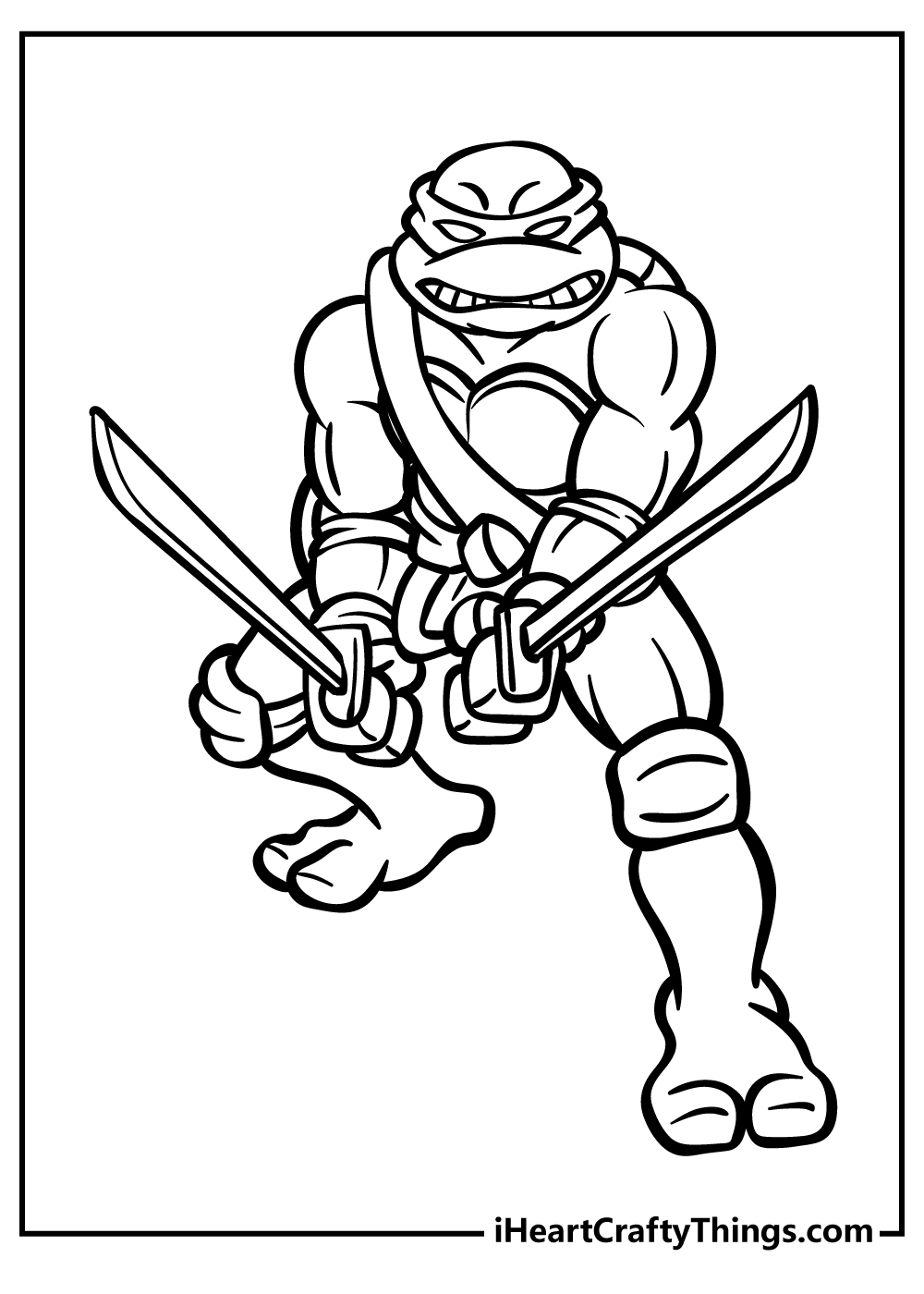 There is a really cool pose to color in this Ninja Turtles coloring sheet! This turtle is looking really awesome, and it’s another one where he could technically be any of the four turtles.

If you can’t decide which one to make him, you could print out four copies and make one of each! 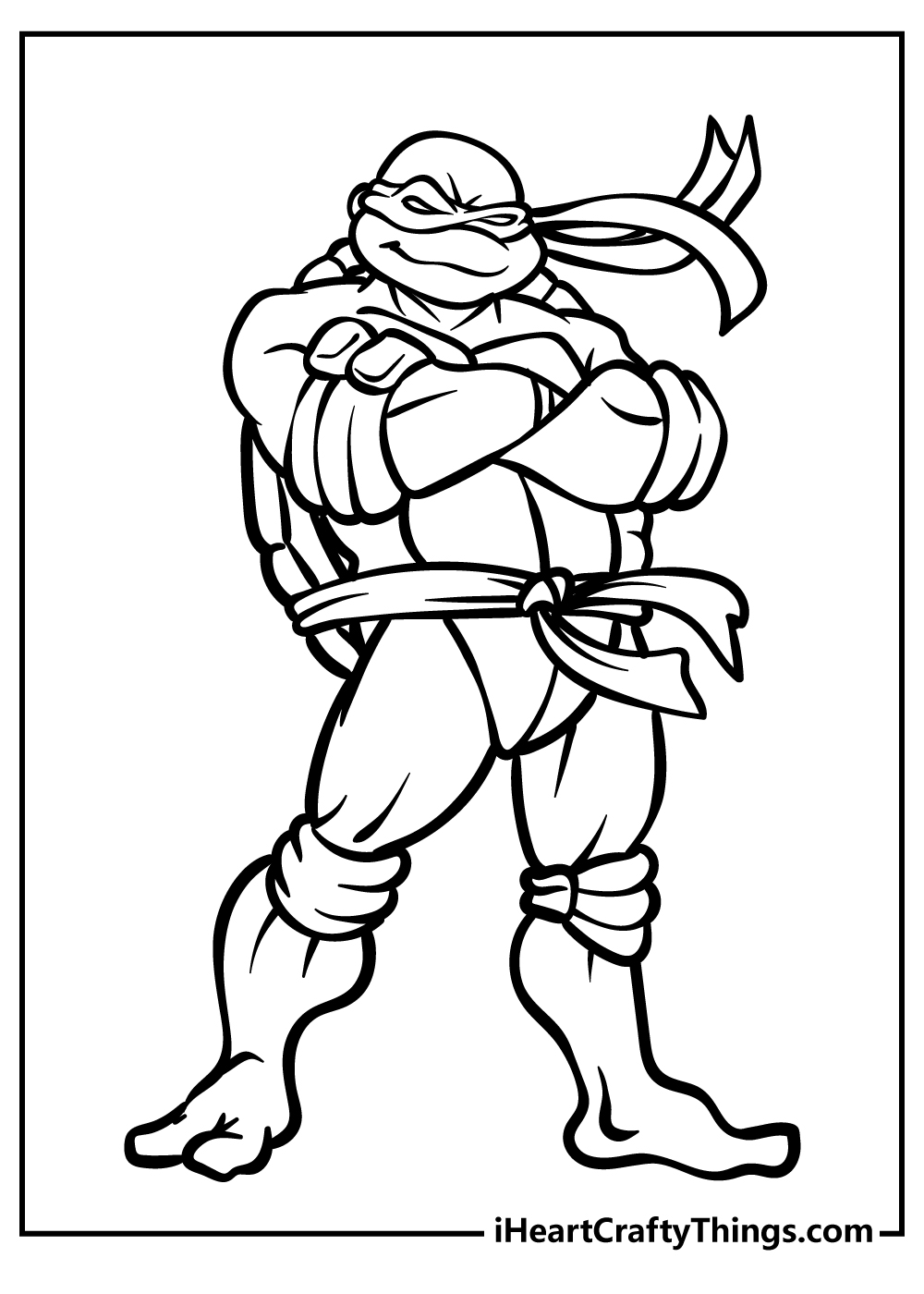 We have another really cool pose for you to color for this sixth image. Once again, you have free reign with which turtle you could make this one.

If you have two favorite Ninja Turtles, you could print out this and the previous one and then stick them on a single sheet of paper for one fun idea! 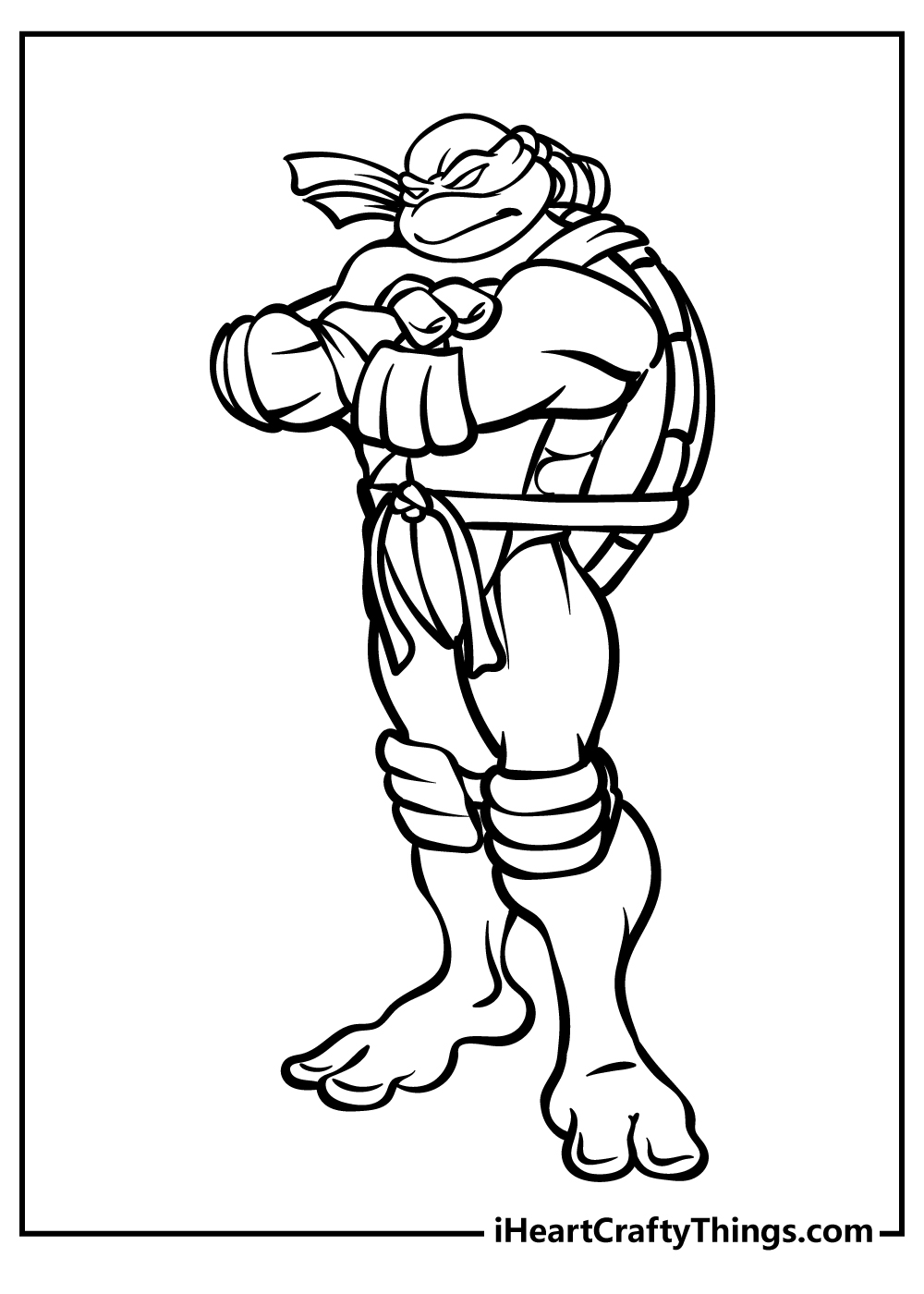 Raphael makes his debut in this next picture! This turtle uses red for his identifying color, and he wields weapons known as sais.

He is known to be one of the most serious and moody turtles, and this is indicated with his fierce facial expression. This one will definitely look really cool when you have finished it! 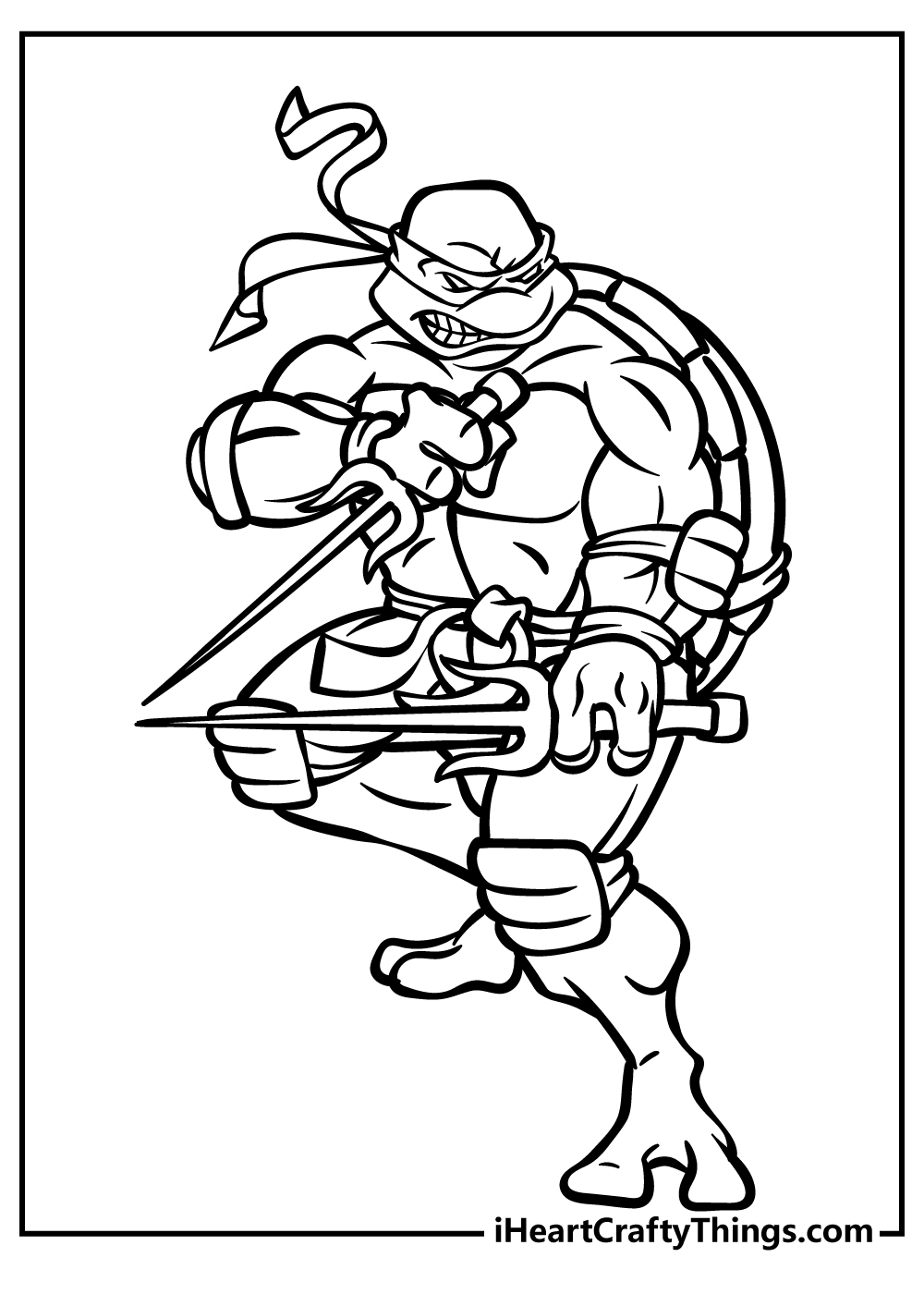 We have another really cool portrayal of Raphael for this next page!

If you color both this page and the previous one, you could change up the color shades and art mediums that you use, even if you stick with his red color scheme.

Which colors will you choose for this second portrayal of Raphael? 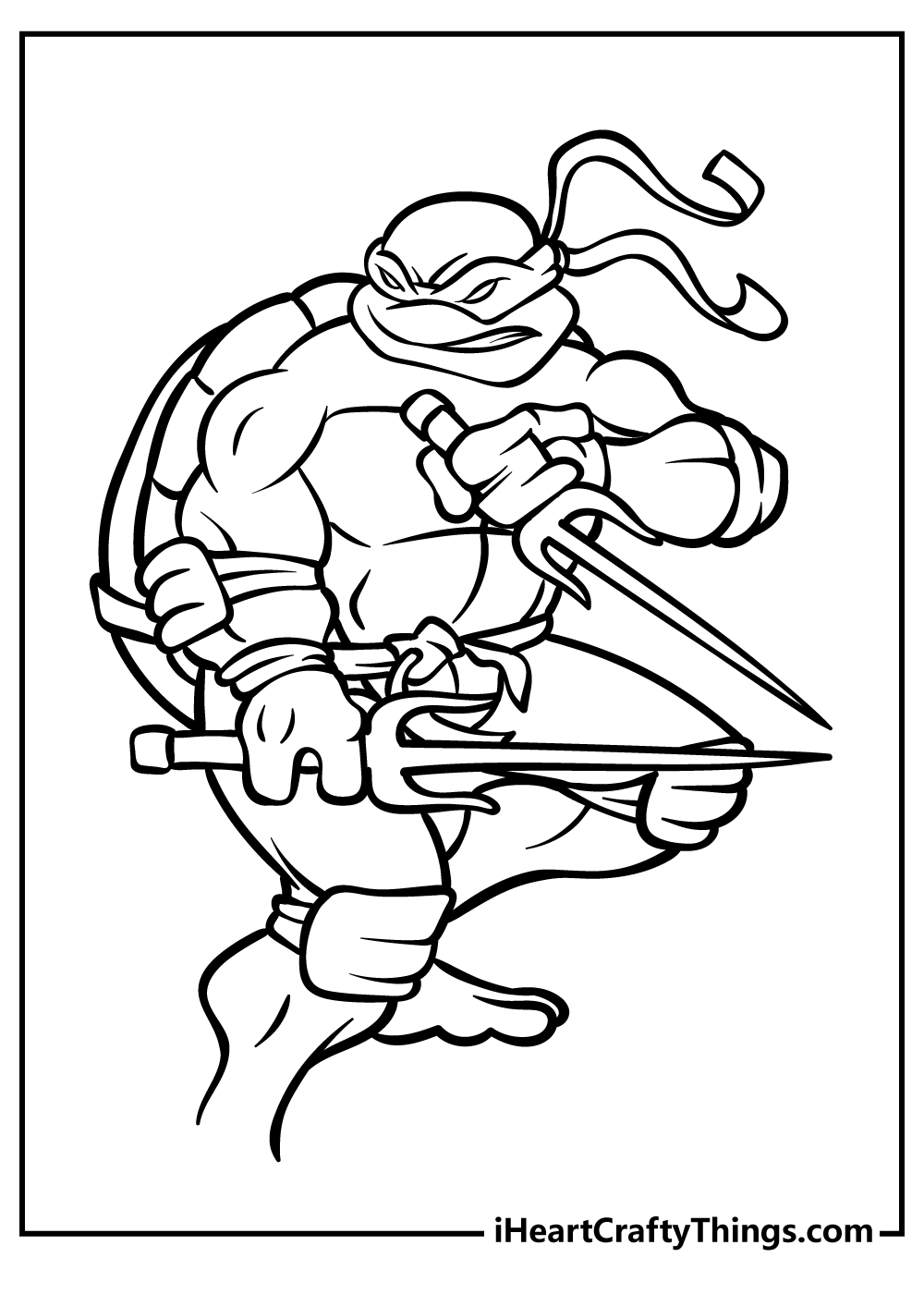 It’s time for another close-up with this ninth Ninja Turtles coloring printable! Again, this is a great picture to color as you could go with any of the four turtles.

Which turtle will you choose? Or, will you print four copies and make one of each? 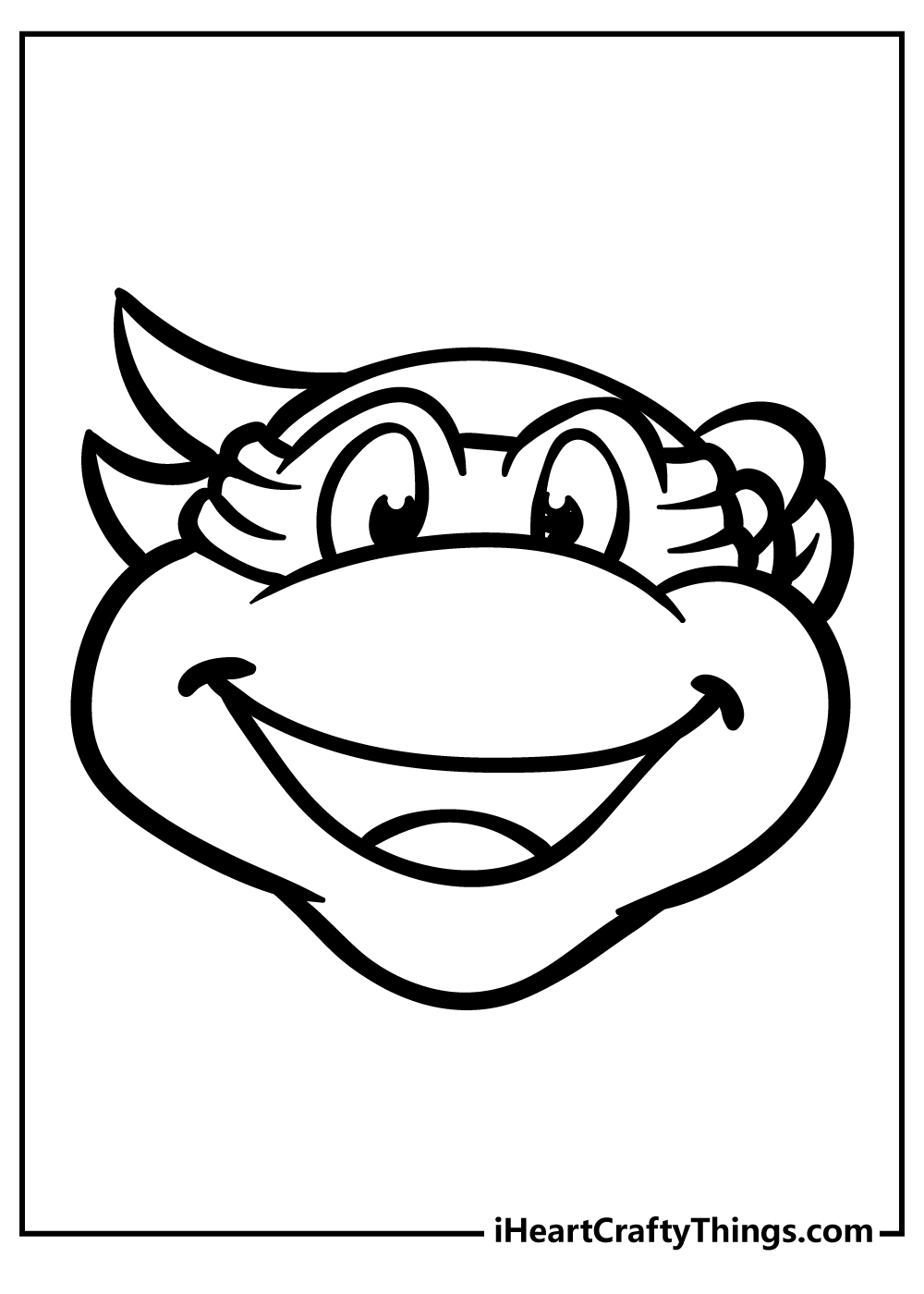 Raphael is in a bit of a relaxed pose in this next image. The previous portrayals had him in action poses, but here he seems to be enjoying a quiet moment.

That isn’t to say that he doesn’t look super cool in this picture though. There are so many different ways that you could color this awesome portrayal, so show us what you can do as you finish it off! 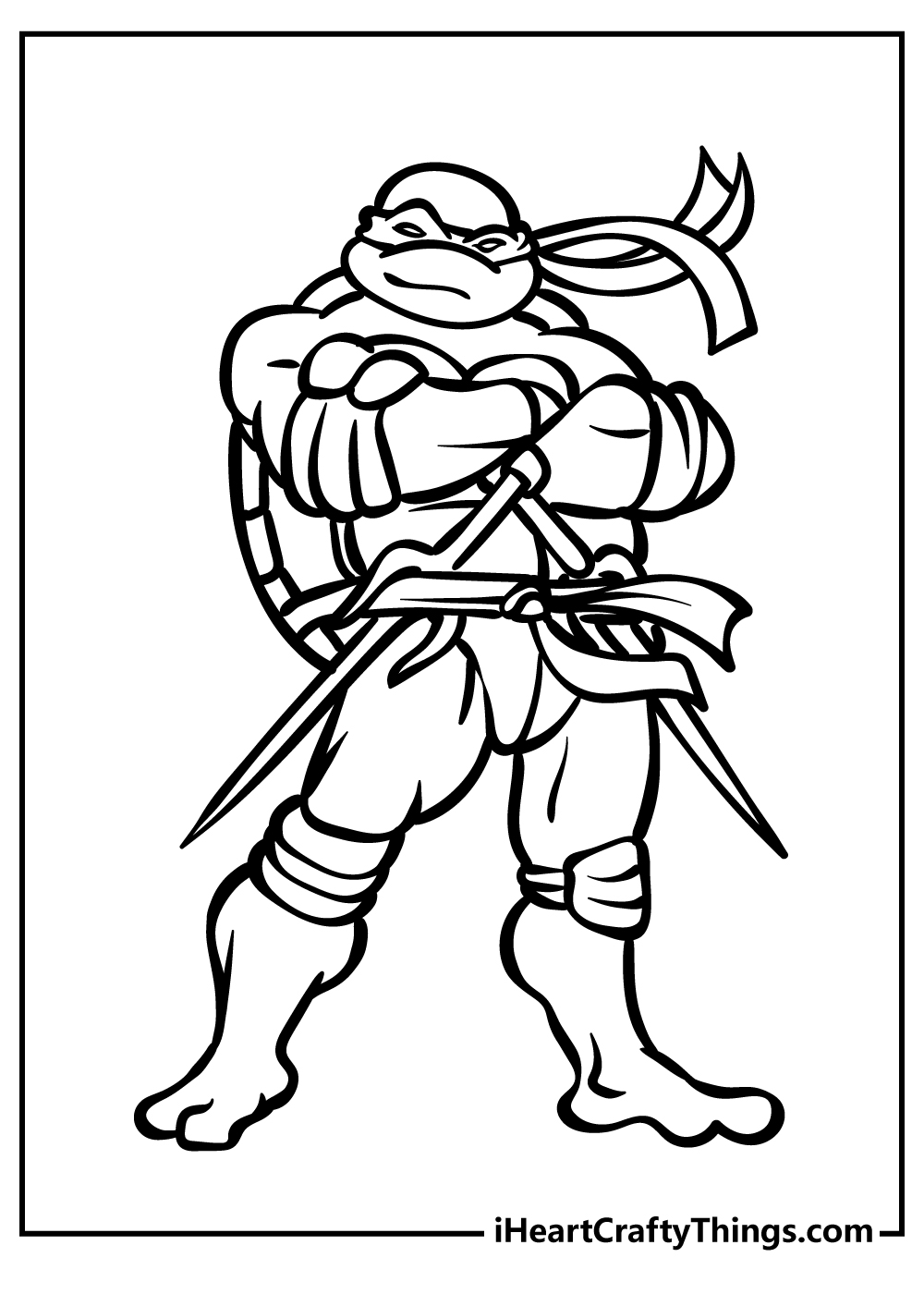 Leonardo is back in this next picture. He is also in a pose that suggests he’s not in a fight, but his weapons are at the ready and he has a serious face, which indicates that this could change soon.

You could also draw in some background details to show what kind of situation Leo could soon be in! 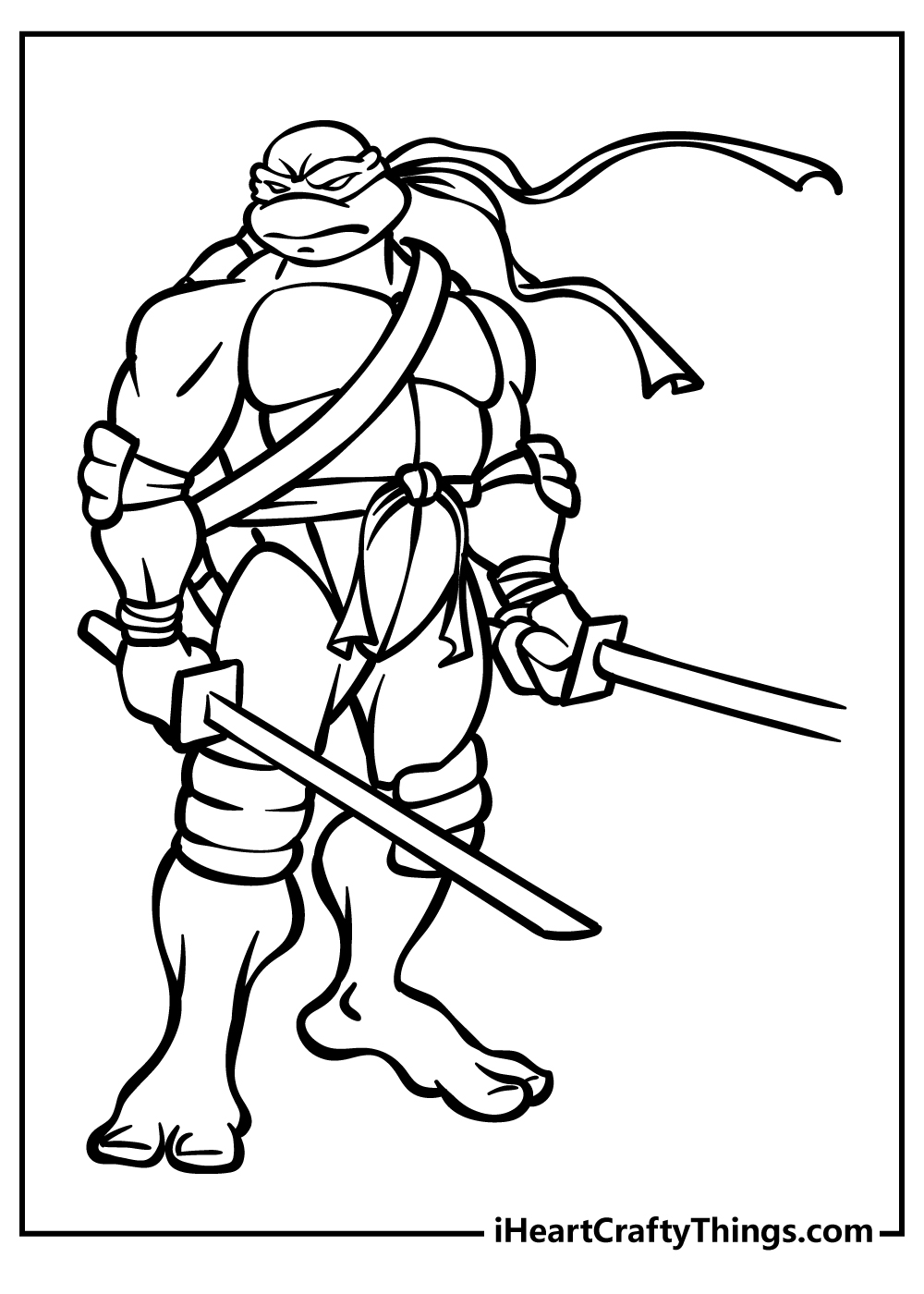 We weren’t going to forget the final turtle of the team in this collection! Here we have the fun-loving Michelangelo, posed with his iconic nunchucks.

He is the most light-hearted of the turtles, but he looks pretty serious in this image. Remember that the color scheme for his gear is orange if you wish to make him look accurate. 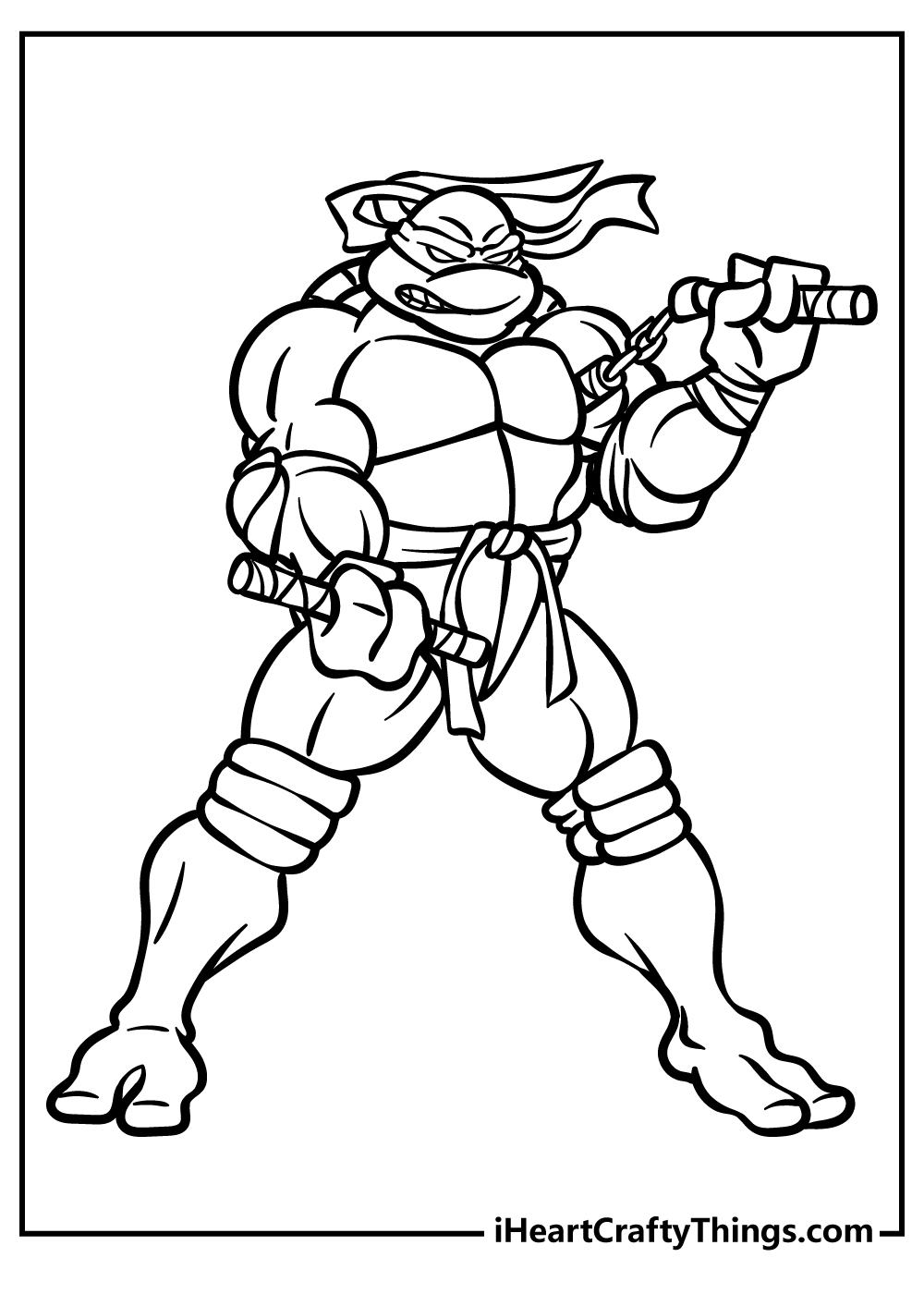 There is a much more lighthearted interpretation of Mikey for you to color in this next image!

If there is one thing he loves more than saving the day, it would have to be pizza, and he is enjoying a slice here!

We would use some bright colors done with colored pens and paints to give this scene a brighter look. 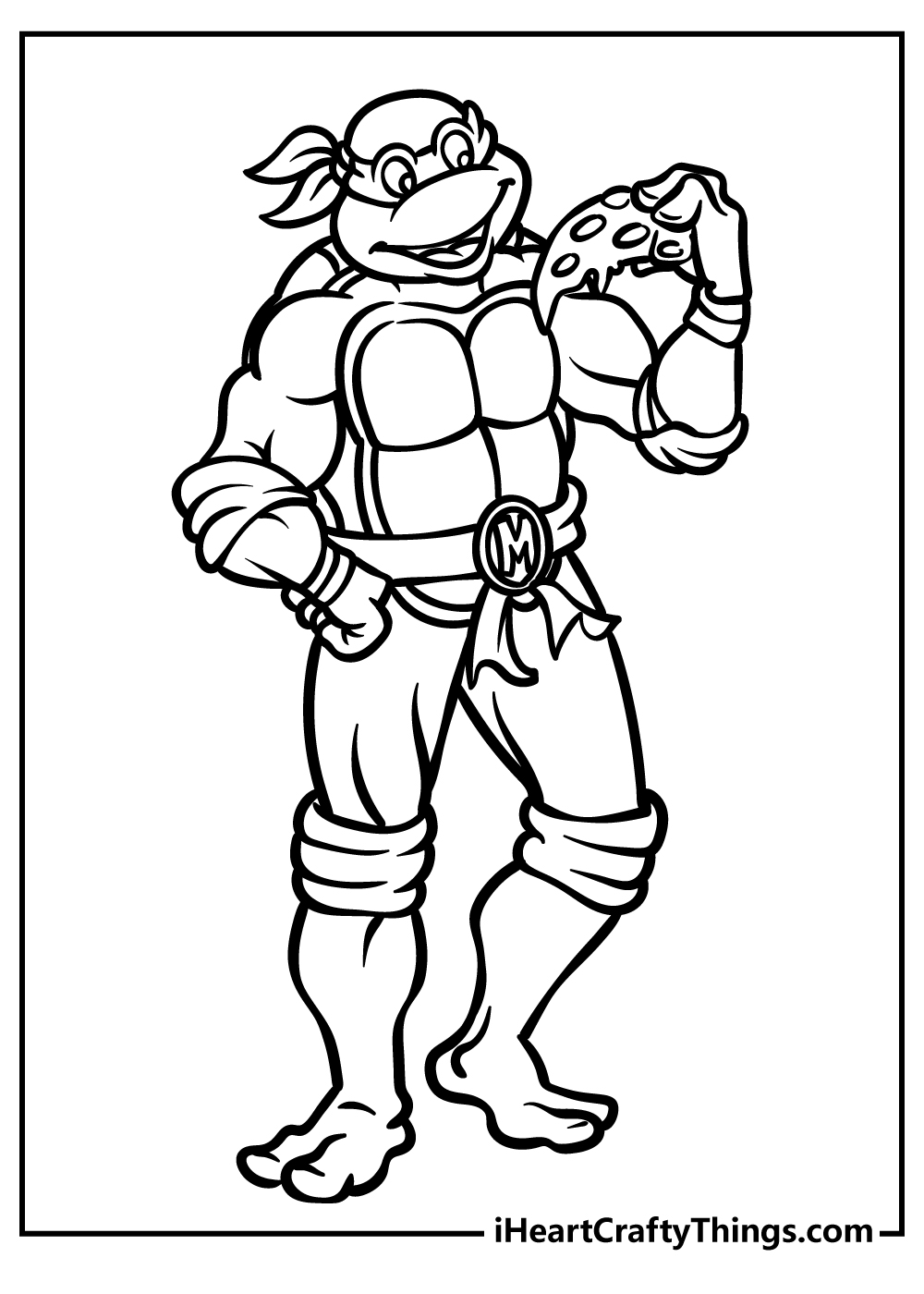 This pose that Raphael is in for this page is just so cool! He seems to be performing an awesome ninja move, and he has a really confident expression on his face as he does so.

This is another page where you could add all sorts of cool extra details to as well! 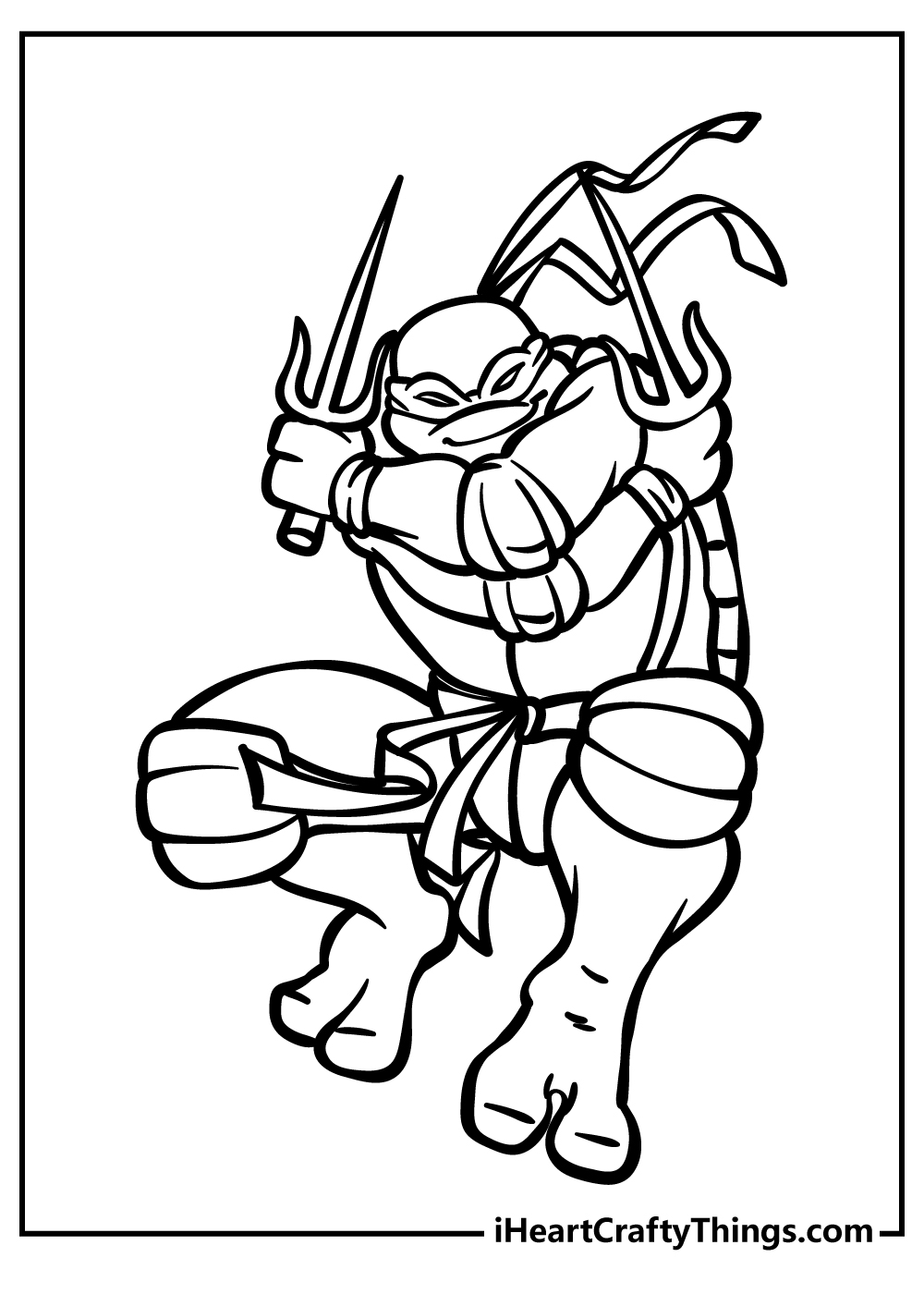 They all love pizza, so using your colors you could easily turn this into your favorite character from the team!

Which of the Ninja Turtles would you choose for this image? 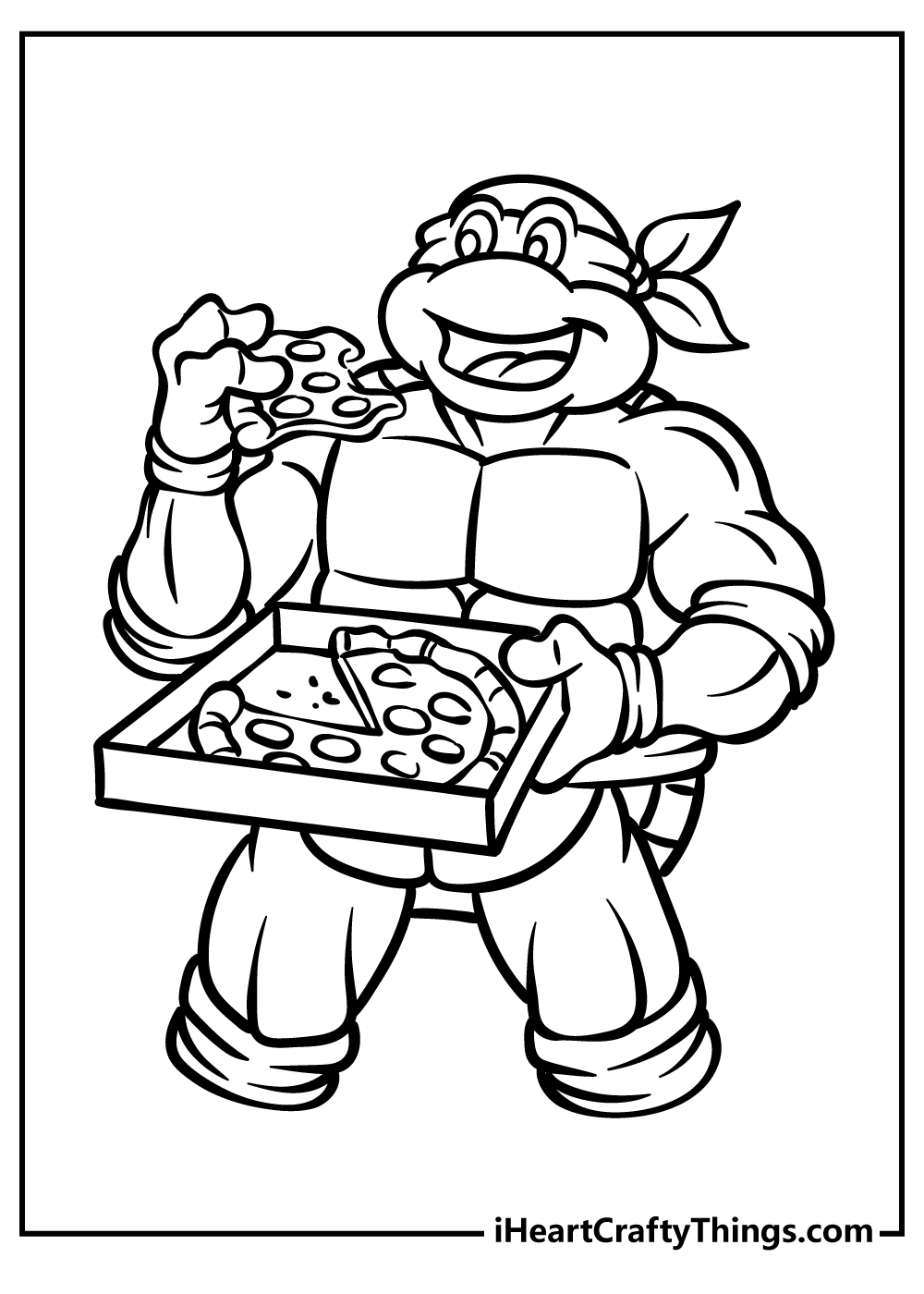 Ninja Turtles Coloring Pages – Which will you choose?

The poses contained in this collection of free Ninja Turtles coloring pages for kids were so cool and varied, and we hope you had a great time going on this adventure!

Whether you love all the Ninja Turtles equally or have a favorite or two, you have plenty of chances to represent them here. 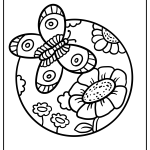 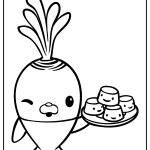