What started as a live-action superhero series, Power Rangers has grown immensely popular around the world and has evolved into an entertainment and merchandising franchise. The TV series’ popularity gave rise to many games, movies, toys, and merchandise.

Power Rangers features costumed heroes that have superhuman strength. These special powers allow them to fight off evil forces and ultimately save the world.

If your kids love Power Rangers or if you simply want to introduce them to these superheroes while developing their creativity, then we got you covered.

Here are 10 new Power Ranger coloring pages for kids that you can download for free.

Red Ranger, the one on the left, is the leader of the Power Ranger’s team. In most stories or franchises, Red Rangers were given the most powerful weapons. Red, alongside Blue, is one of the two colors that appear in every Power Ranger season.

Green Ranger is the one positioned on the right. Green Ranger is usually regarded as the funny one on the team but can be assigned to be the second-in-command. Green is also one of the few to be given special gears, next to Red and Blue Rangers.

The costume of the two rangers here is filled with many small details. Give this Power Ranger coloring page for kids to keep them occupied and focused. 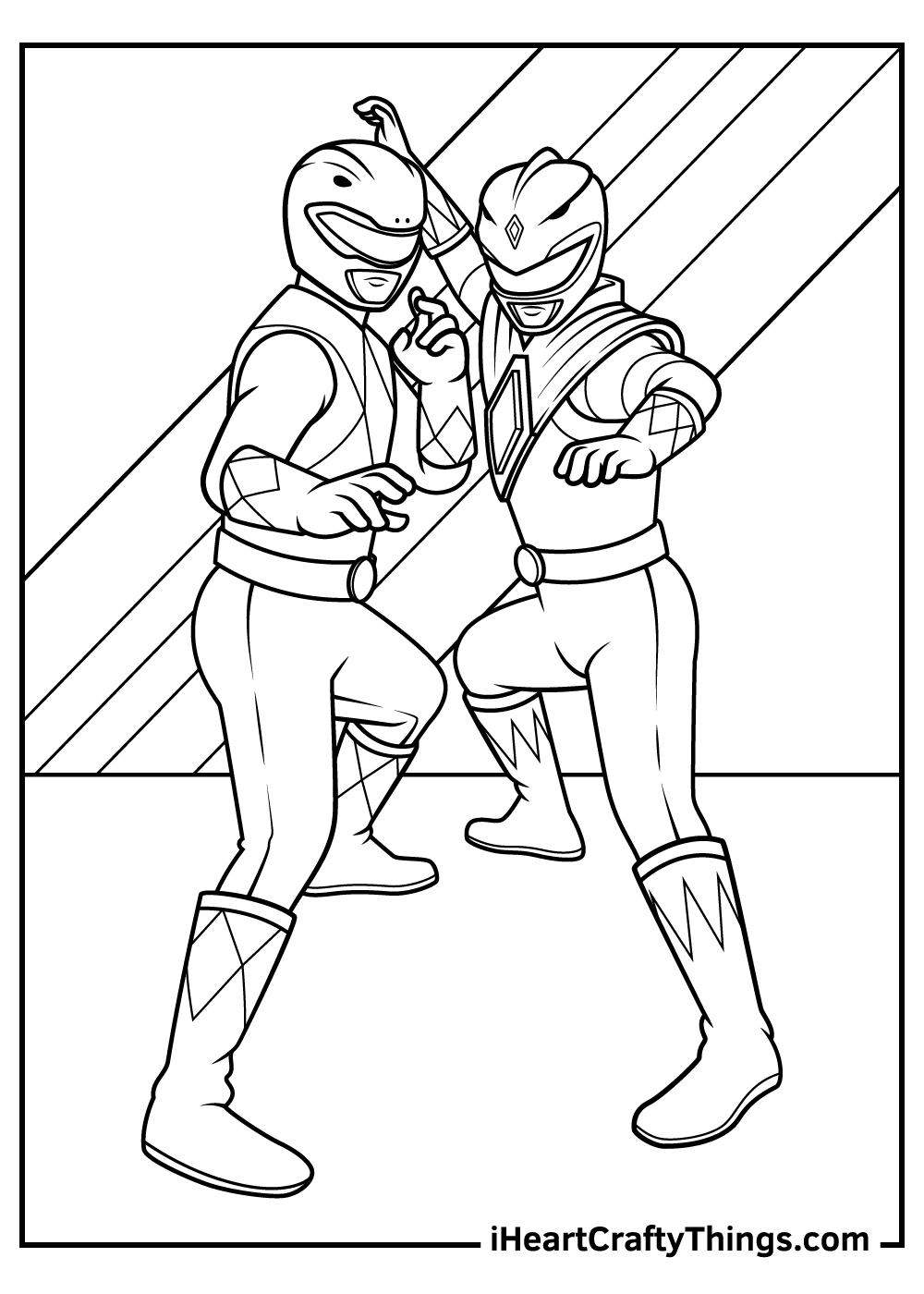 Blue Ranger, as seen on this next free printable, is usually the second-in-command of the team.

Blue Ranger is usually the serious one and is often regarded as the smart one in the group. It’s also the other ranger to appear in every season next to Red. 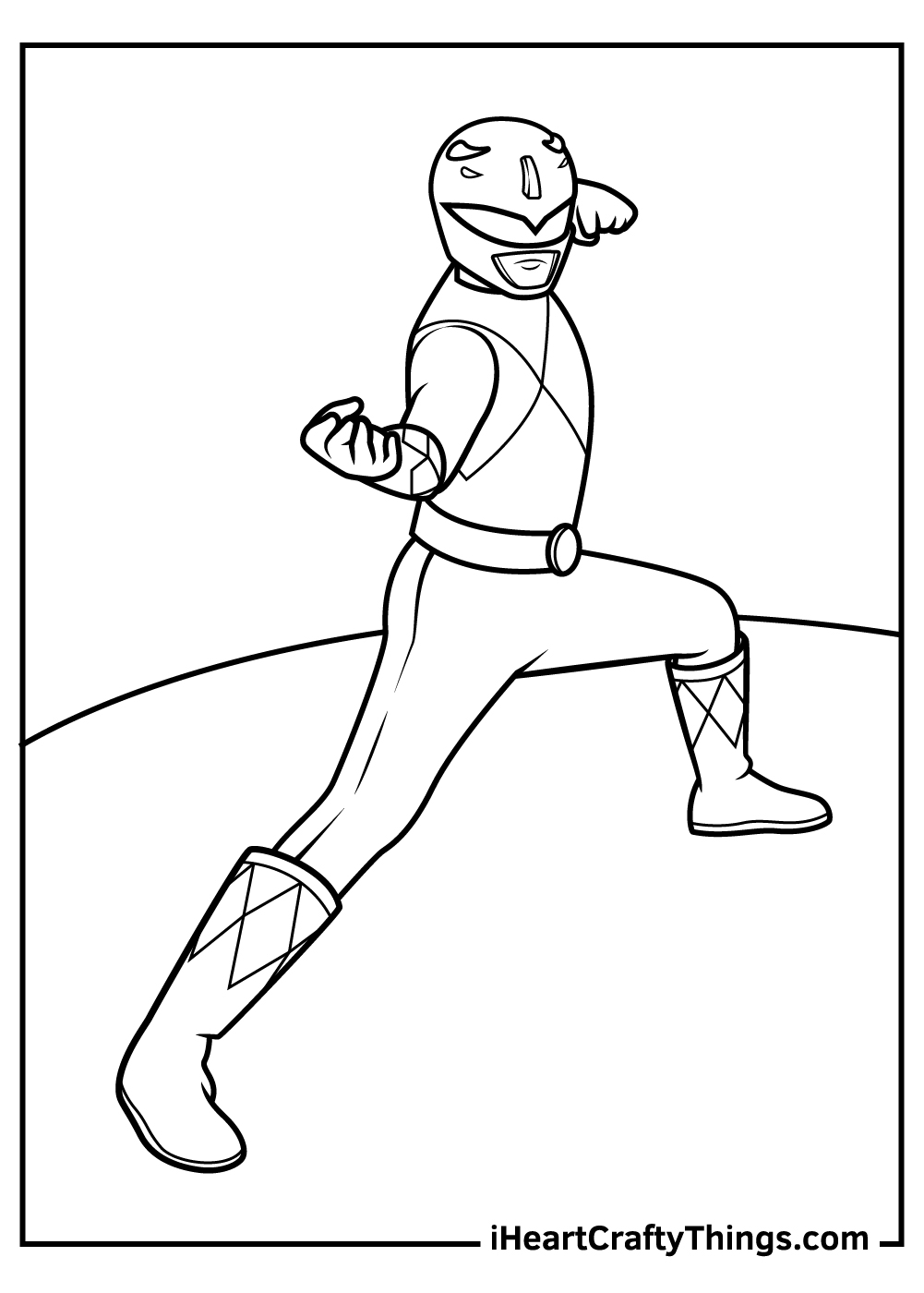 Featured in one of our Power Ranger coloring pages are these two female superheroes.

Pink Ranger on the left, is usually the voice of reason for the team. And almost always, her costumes have a skirt. Pink Ranger always gets the most candid weapons in the team.

Yellow Ranger, standing on the right, is the team’s morale booster and remains always level-headed in times of crisis. Yellow Ranger is a pretty strong-willed individual. 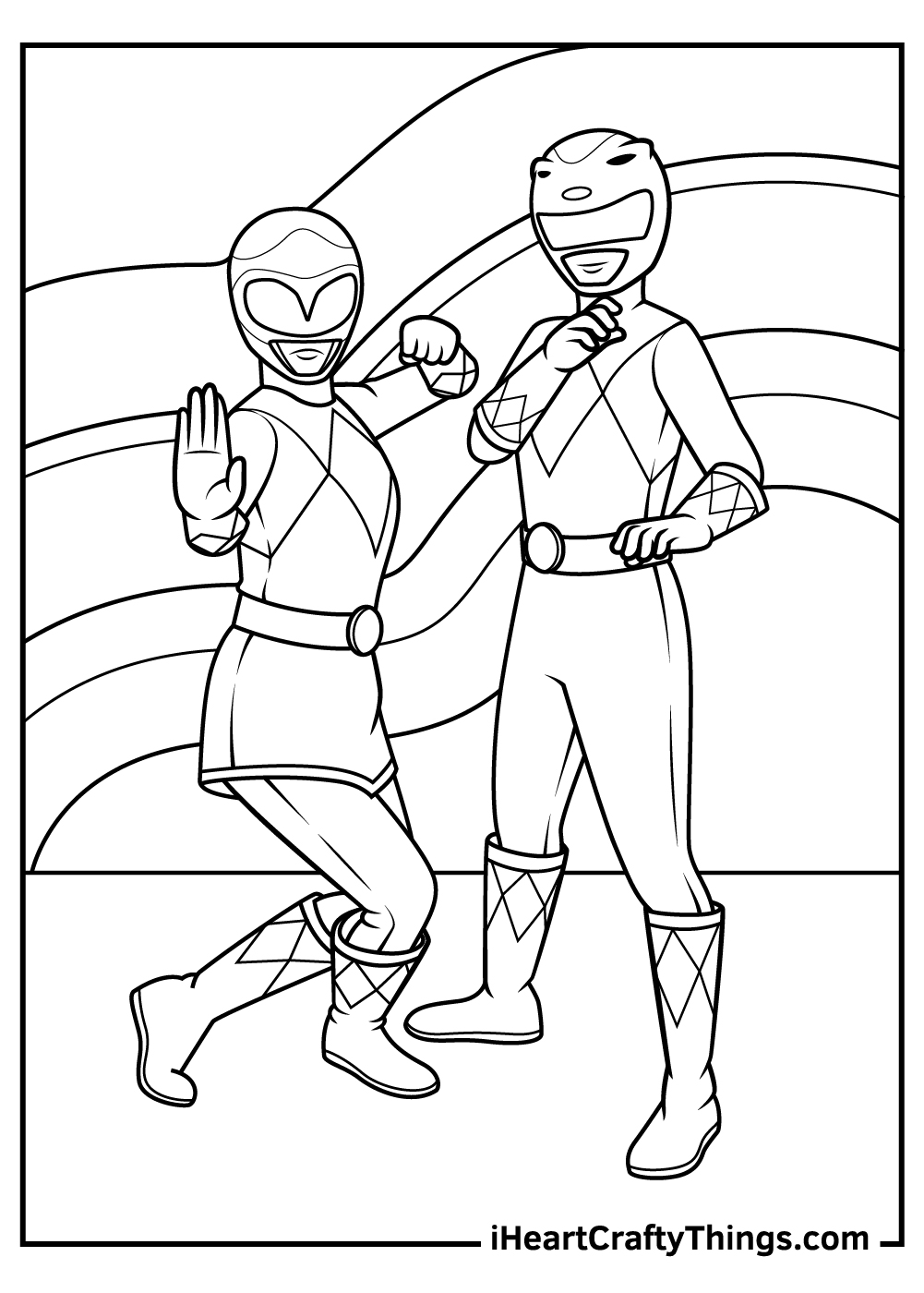 Black Ranger is an enthusiastically upbeat person and regarded as the prankster of the group. He is fun-loving and fearless and serious about saving the world.

Download this Power Ranger coloring page for kids who are also serious about changing the world, one color at a time. 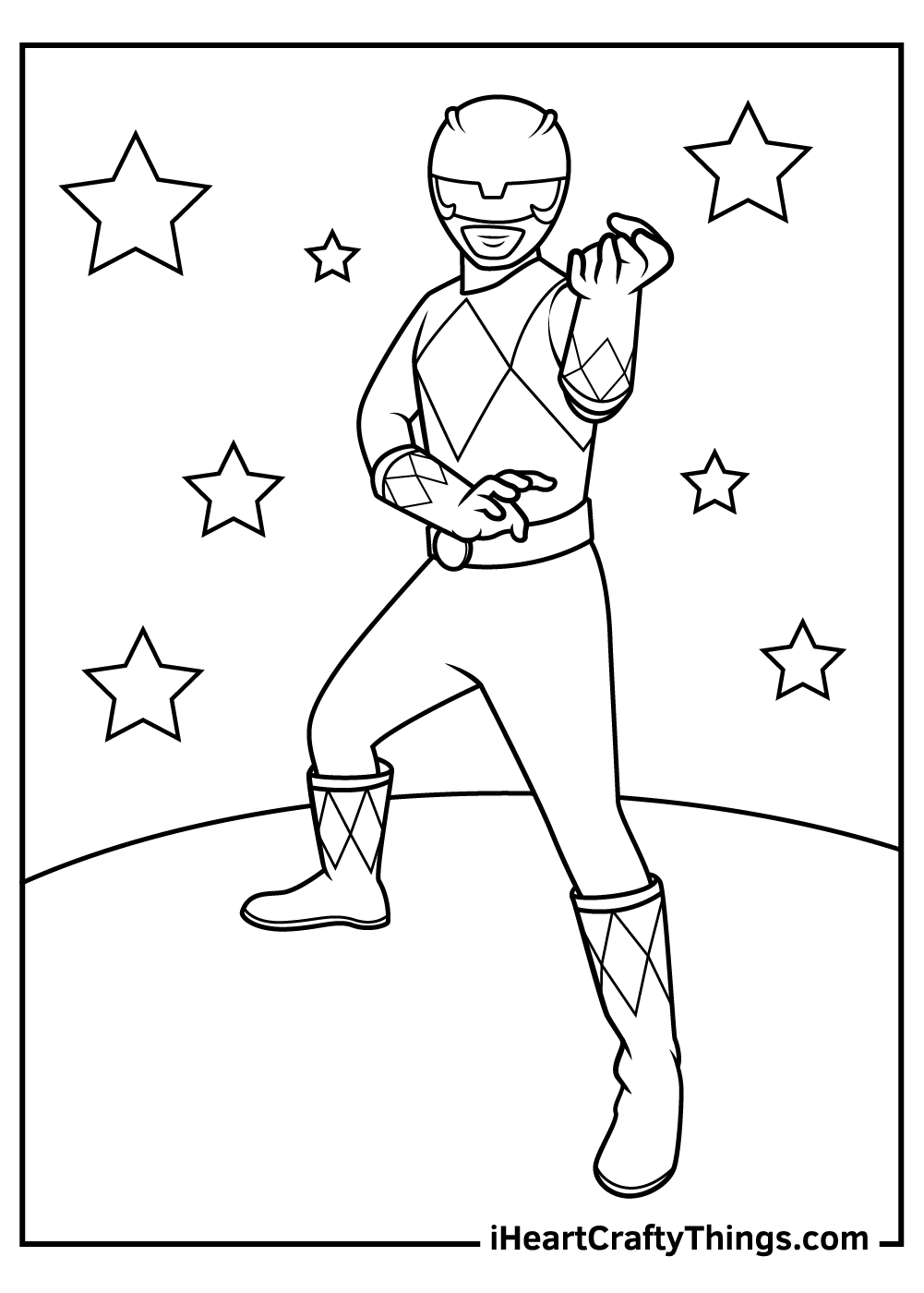 White Rangers, who are typically Special Rangers and not part of the core five, have swords as their main weapon.

The power of White Rangers is said to be made from the light of goodness and can never be corrupter by evil.

The costumes of White Rangers are white with gold accents. If your kid loves this special character, download, and print this for free. Once he’s done coloring, you can pin this up on his wall as a poster. 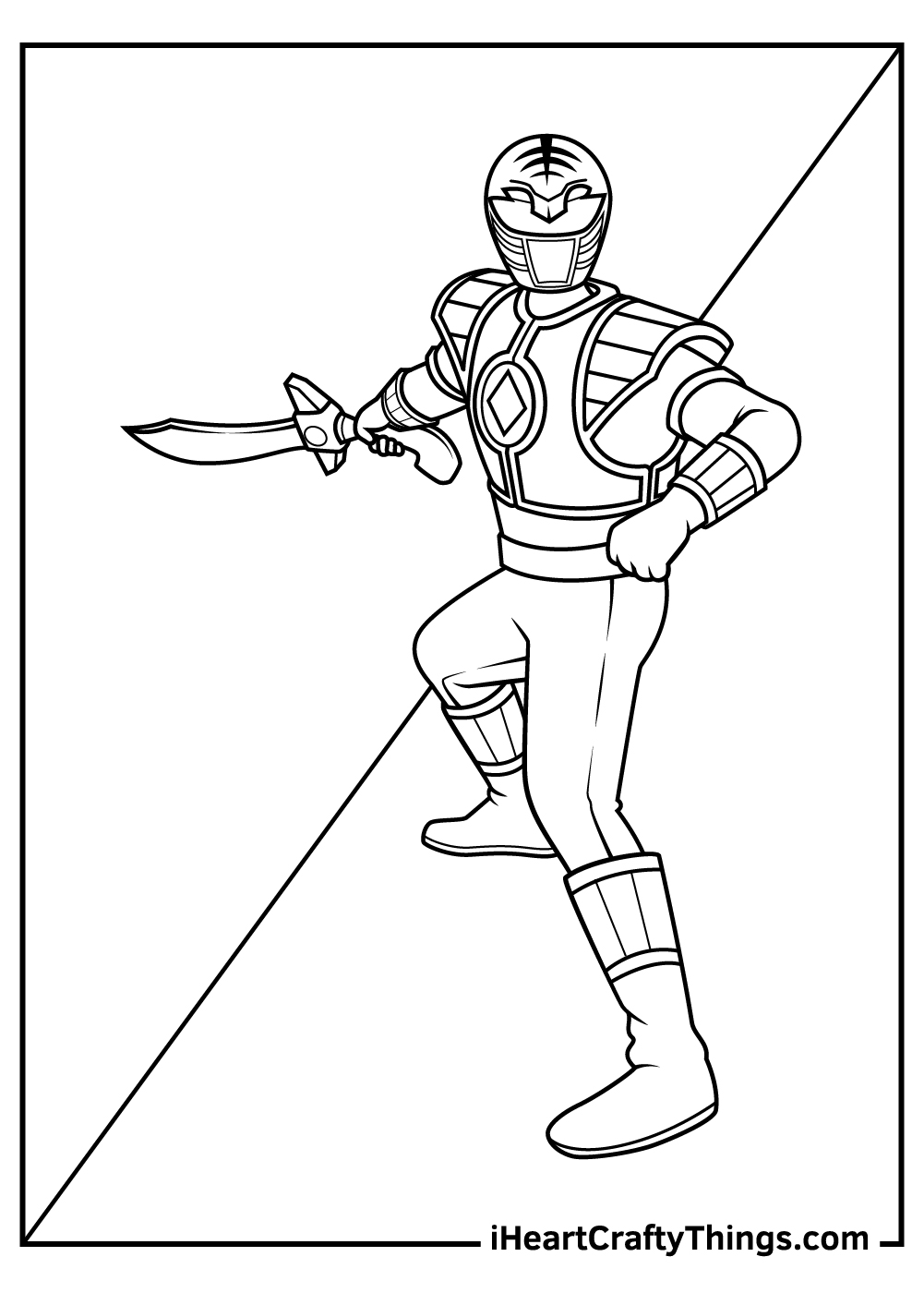 Yellow Ranger is beautiful, smart, and can be very deadly in battles. Because of this combination,

Yellow Ranger is a common favorite, especially among little girls.

Her usual weapons are small hand weapons such as daggers or hammers.

Here she is in this free Power Ranger coloring page for kids showing her fighting pose with what seems like rainbow lines behind her. 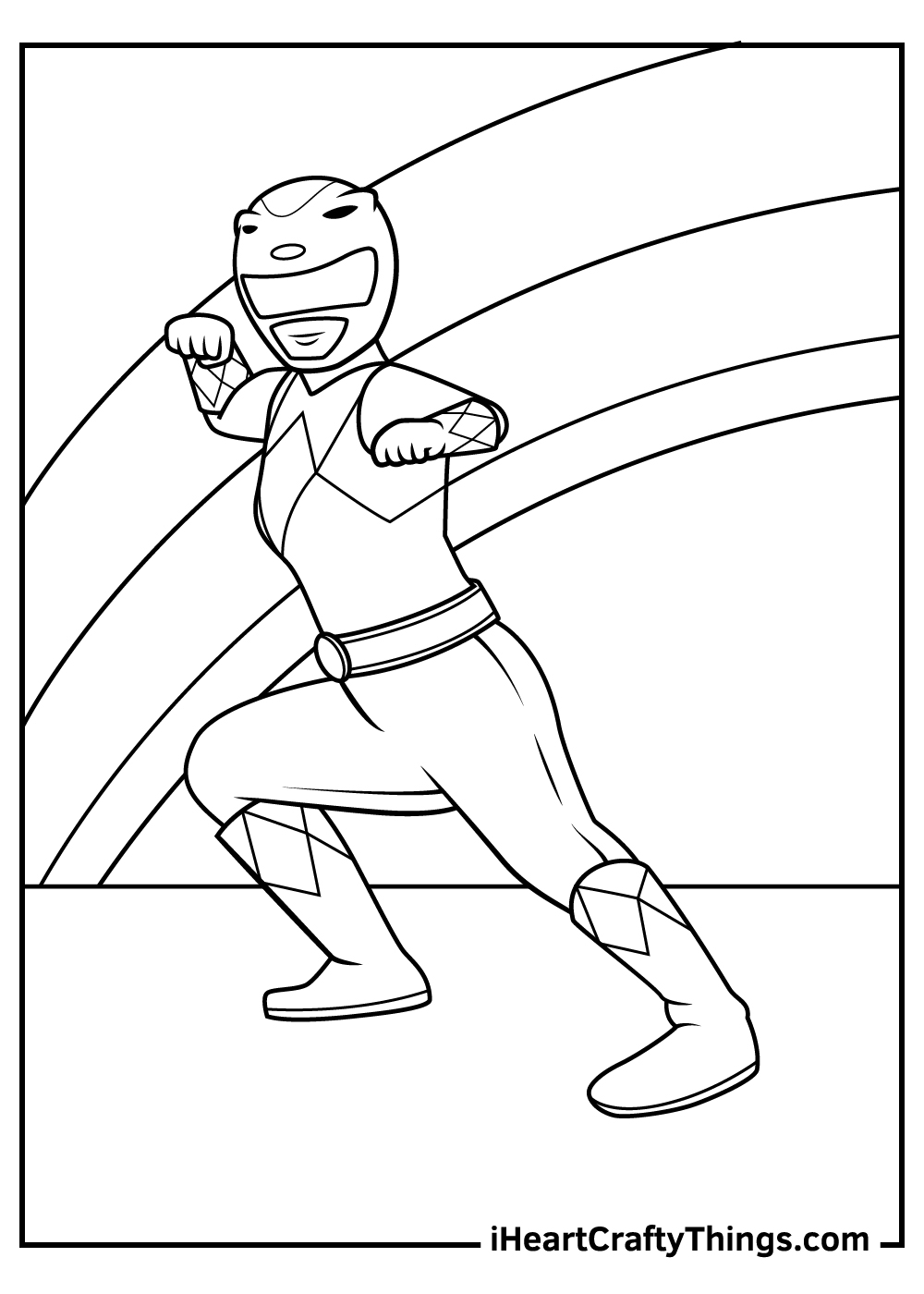 Blue Ranger takes the spotlight on this free printable. He shows off this fighting stance in this image.

A favorite from fans, he is often seen as the brainiest of the rangers. With his wits and fighting capabilities, he is sure to give a hard time to invaders. 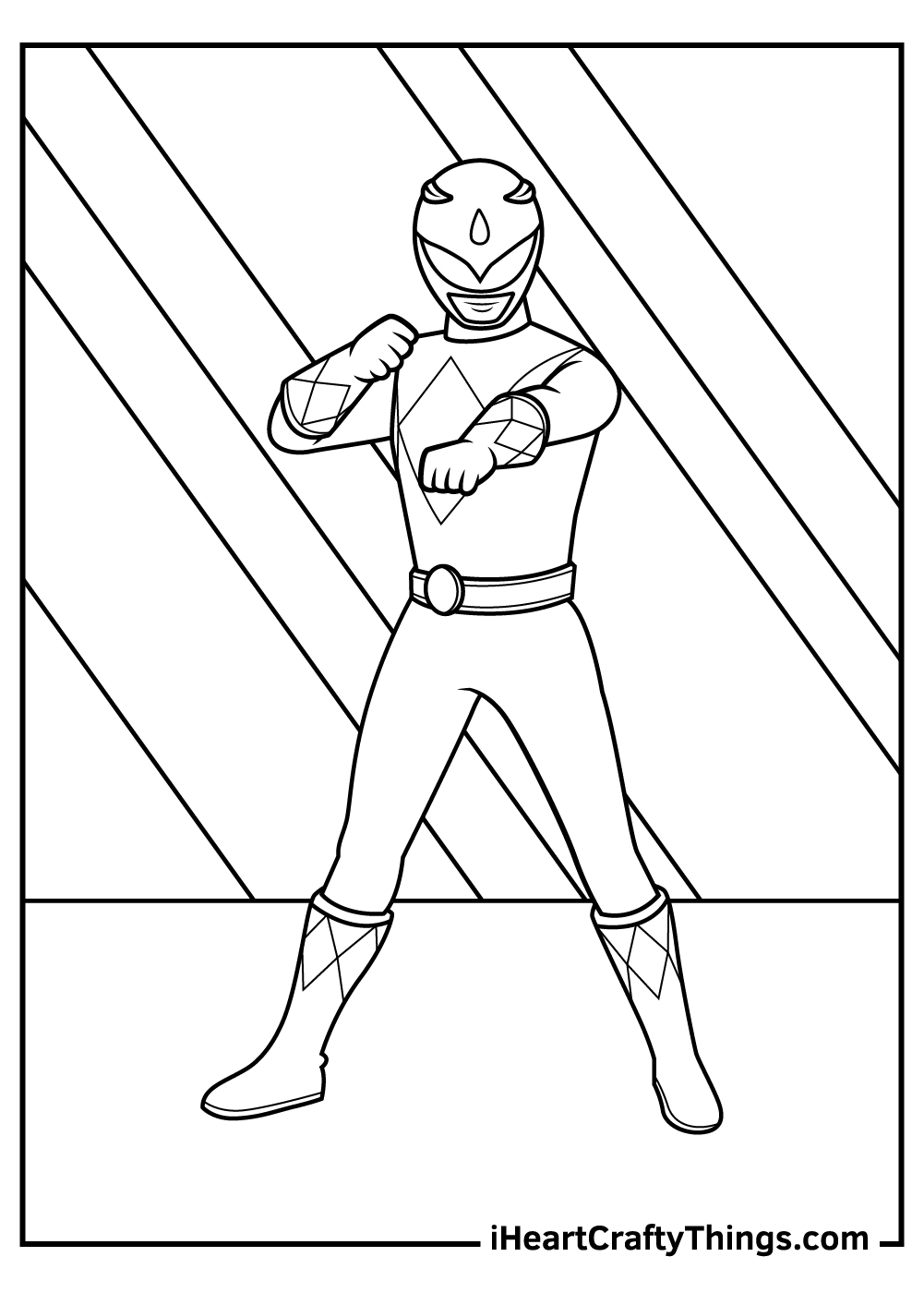 Another favorite among young girls, Pink Ranger is another female heroine that takes saving the Earth on a personal level. She loves taking care of the planet and will do anything to protect it.

Kids can practice color combinations in our Power Ranger coloring pages, most especially on this one as stars are scattered on Pink Ranger’s background. 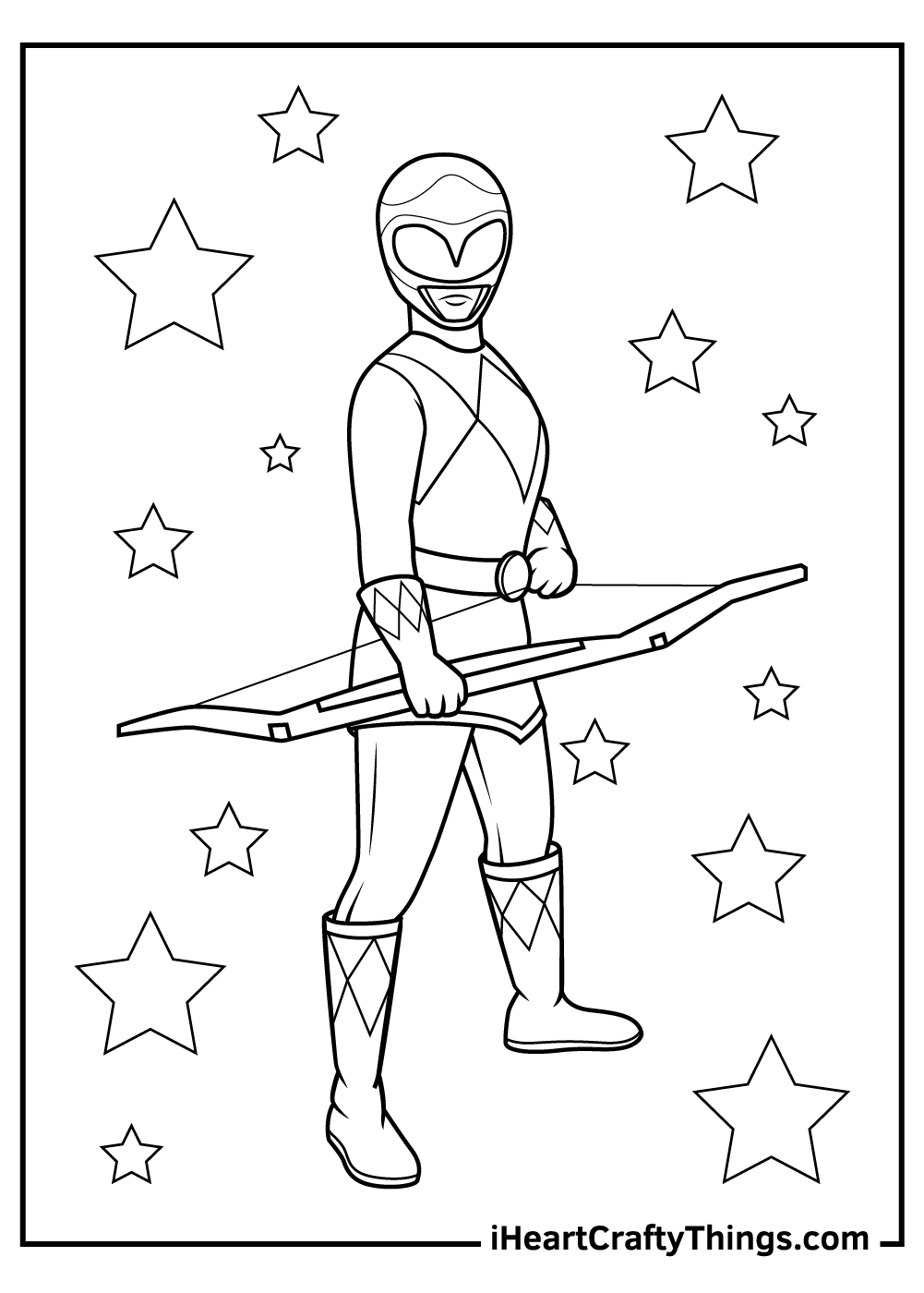 The full Power Rangers team poses on this free printable.

One of the key moments in Power Rangers is their memorable fighting poses. And kids and adults love them!

This coloring page will be a little challenging but will be very fun to do for kids! This page will bring out their creativity. Time to take all the vivid colors out to bring this to life! 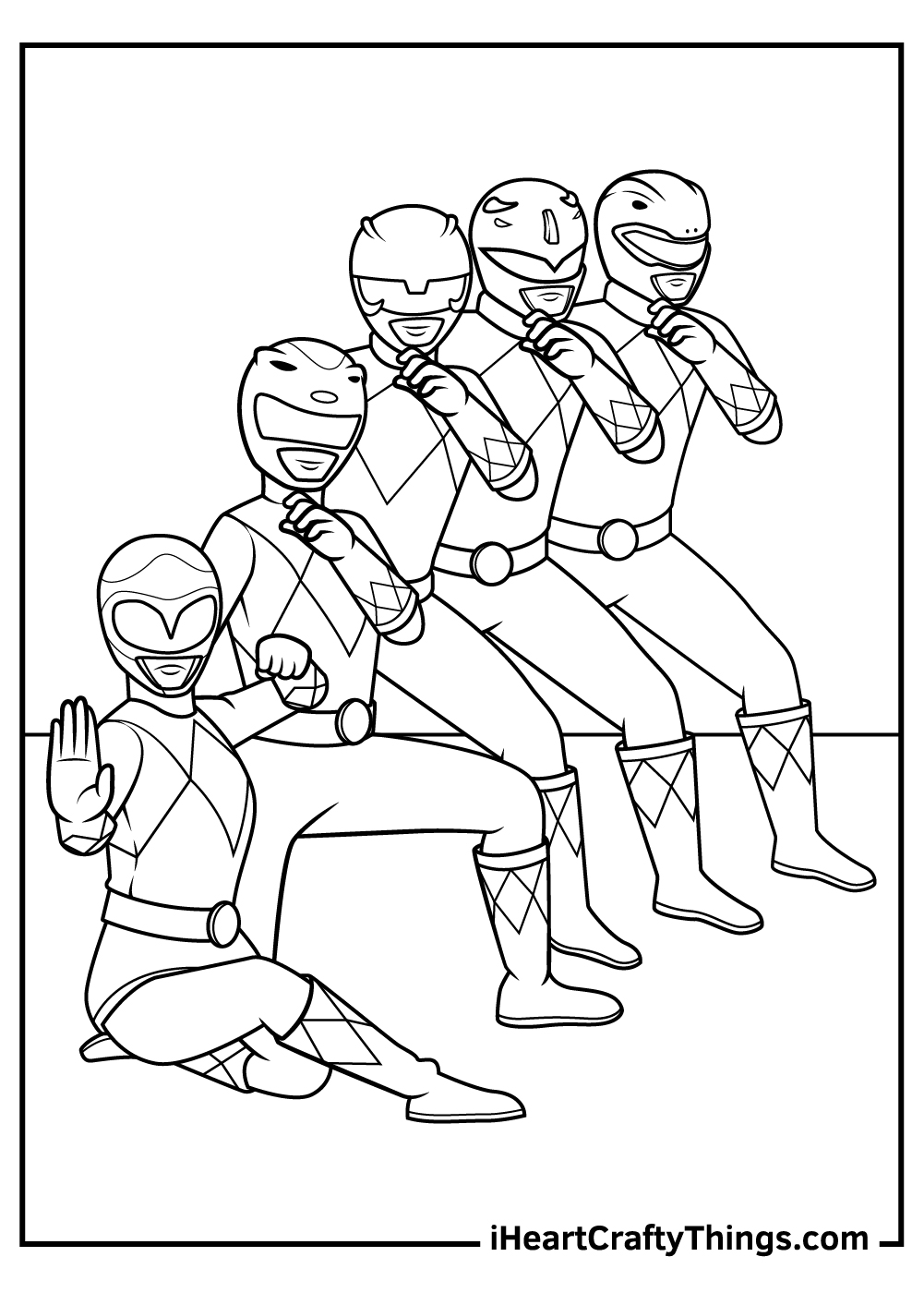 The last page of our Power Ranger coloring pages is another challenging yet engaging one to do.

Power Ranger is posing in a fighting stance with waves surrounding him. What colors do you think would work on this? Will different colors or would sticking to a single color with different hues work? 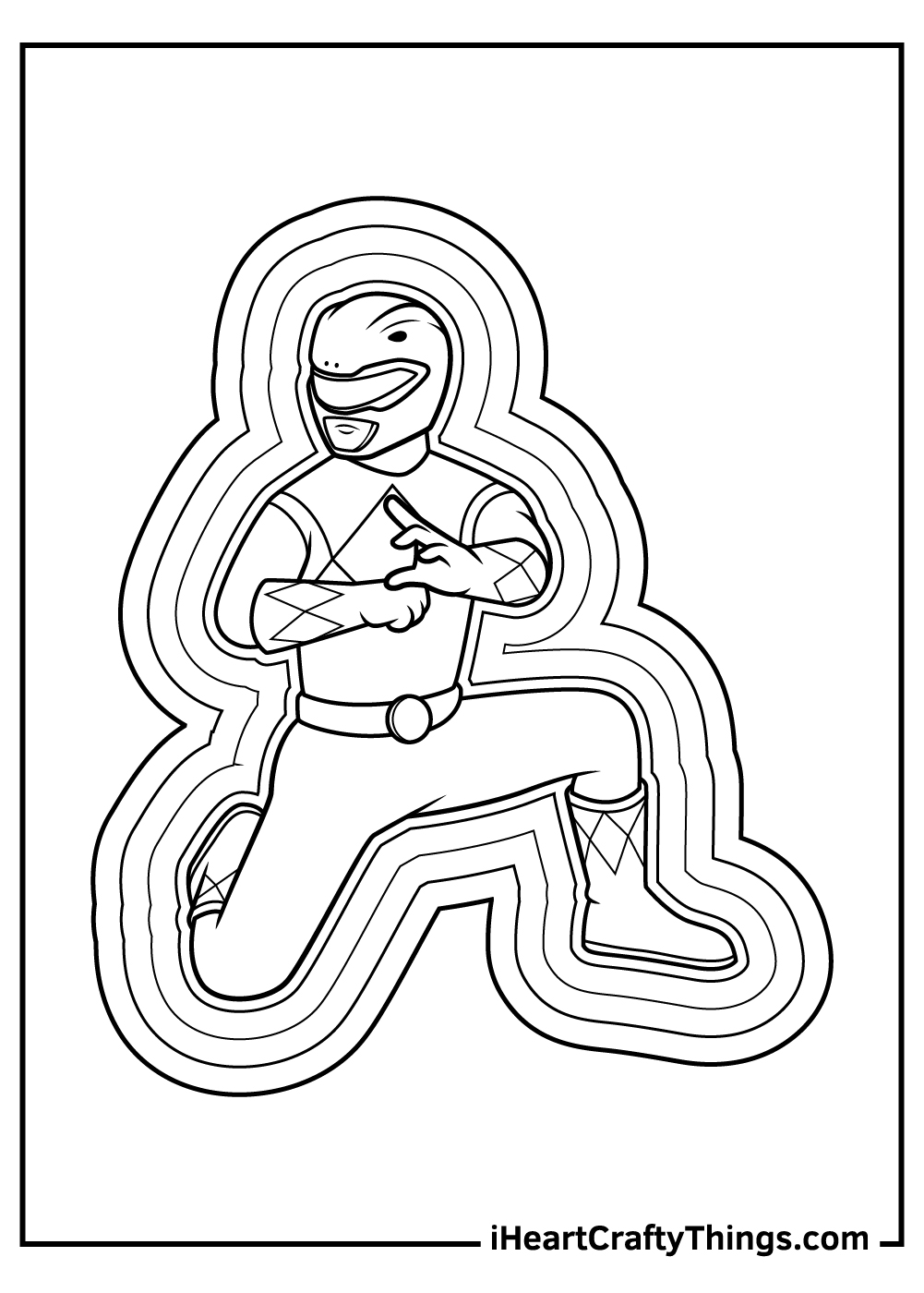 The Power Rangers has been around for years and their popularity grew over time.

With the colorful costumes and interesting personalities of each ranger, kids are easily drawn to them.

It can be a bit challenging to color these with the small details but with a little guidance, kids will get to experience the fun of coloring these Power Ranger coloring pages.

These free Power Ranger printables are both fun and educational. The creativity of kids, as well as their motor skills, will be enhanced on this set and it will surely bring a smile to their faces. 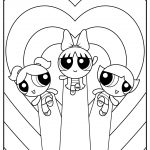 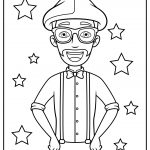