Is your child passionate about everything science fiction-related?

For your little ones who adore playing with robots, watching cartoons featuring friendly robots, then these coloring printable sheets will make a fantastic gift.

Plus, they are so fun and easy to color that we are confident any child will be excited to bring them to life! Just imagine the look on your kid’s face when he starts coloring his favorite robot!

We cannot help but notice the friendly-looking expression on this cute robot.

It almost seems as if this tiny robot is greeting you with the way in which he holds his arms which resemble a pair of springs and hands that look like crab pliers.

You might think these are odd similarities, but they cannot be denied.

When it comes to the color palette, you can let your imagination run wild. For example, an idea would be to choose gray and blue for his antenna, yellow for the round eyes.

The rest of the body can be as colorful as you’d like! There aren’t any rules here. 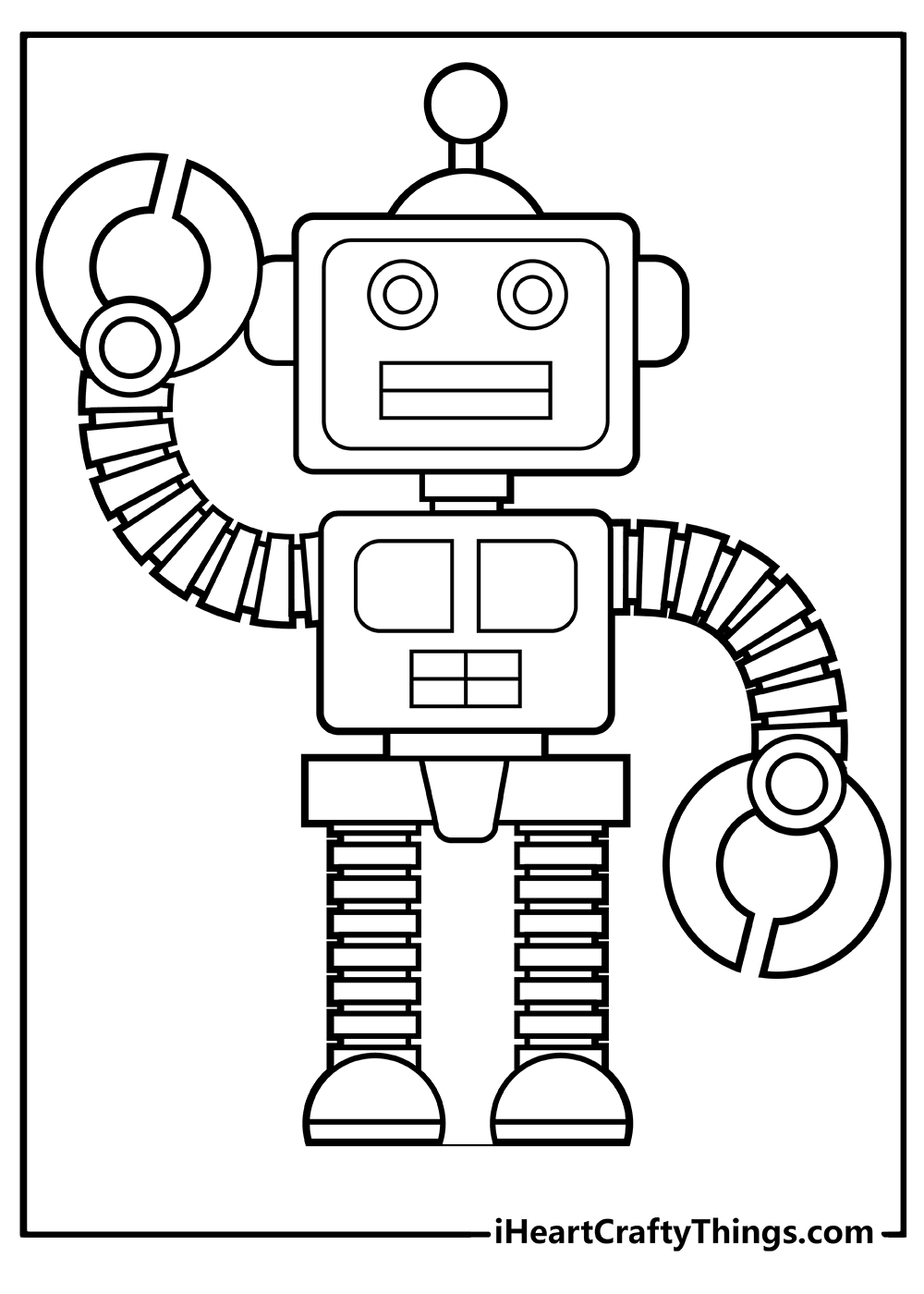 Now, the robot on this coloring printable sheet looks a bit serious. However, don’t worry! We’re sure he is just waiting on some instructions from you.

He is a friendly robot, after all. With his small round-shaped torso and long arms, it gives him a comical appearance. But this is why he is so charming.

Interestingly enough, the way that horizontal line is drawn on his face makes this adorable robot look like he is wearing a pair of glasses.

A visually pleasing idea would be to color him only with two contrasting colors, like red and blue.

The good news is that this robot coloring page is printable, so you can try as many color variations as you want. 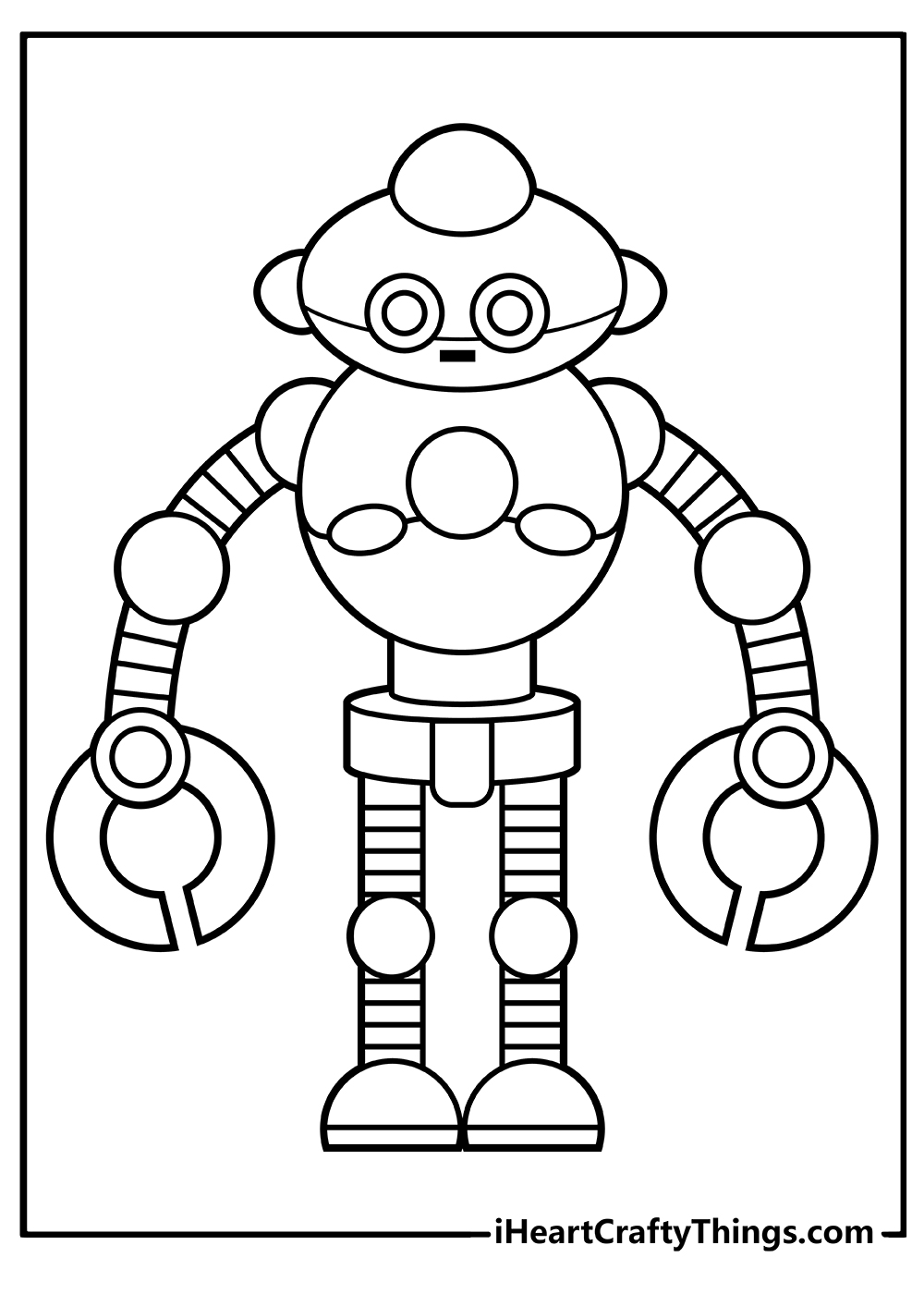 Do you remember playing with spinning tops when you were little? Well, when you combine a spinning top toy and robots, you get a fantastic coloring sheet with this delightful tiny robot.

Chances are your kid has also played with this entertaining toy, given their timeless nature.

There is no denying that your kid will enjoy coloring it. Just imagine how fascinating this robot must look when spinning like that toy.

This is why we think that a multicolored palette would look so pretty on him. With its rectangle-shaped head, resembling the classic Gameboy console, this robot is undoubtedly one of a kind. 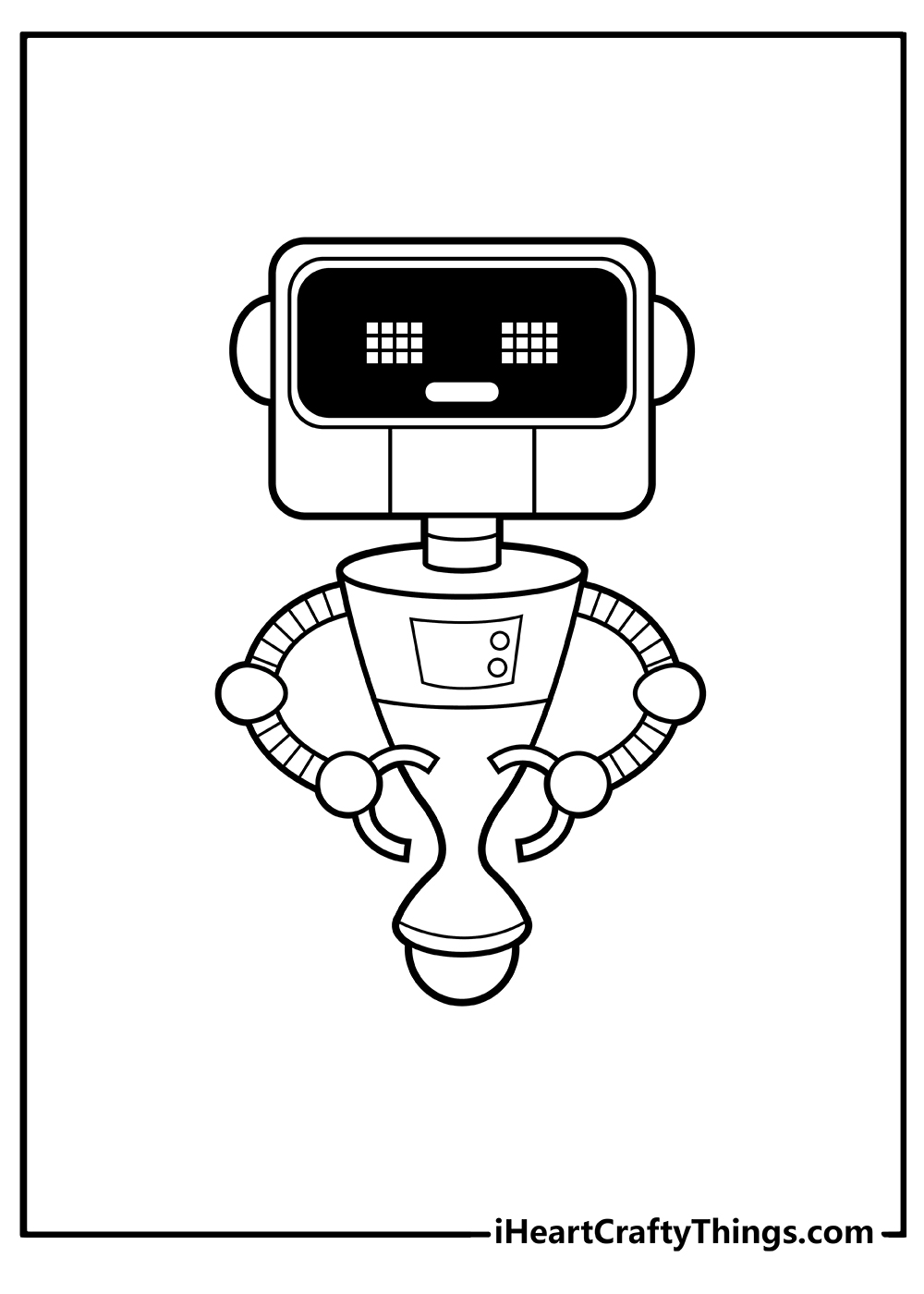 Every robot has a charm of his own. To say that this next robot coloring page shows an interesting-looking robot would be an understatement.

Doesn’t his head look like the type of unidentified flying object or UFO we used to see in cartoons?

With tank wheels for legs and the same spring-like arms with crab pliers for hands and an elongated hexagonal body, it wouldn’t be surprising this robot became your kid’s favorite.

Coloring this printable sheet must be so enjoyable.

What if you only used bright colors? For example, orange for the UFO-inspired head and hexagonal body, green for arms, and various colors for the wheels. 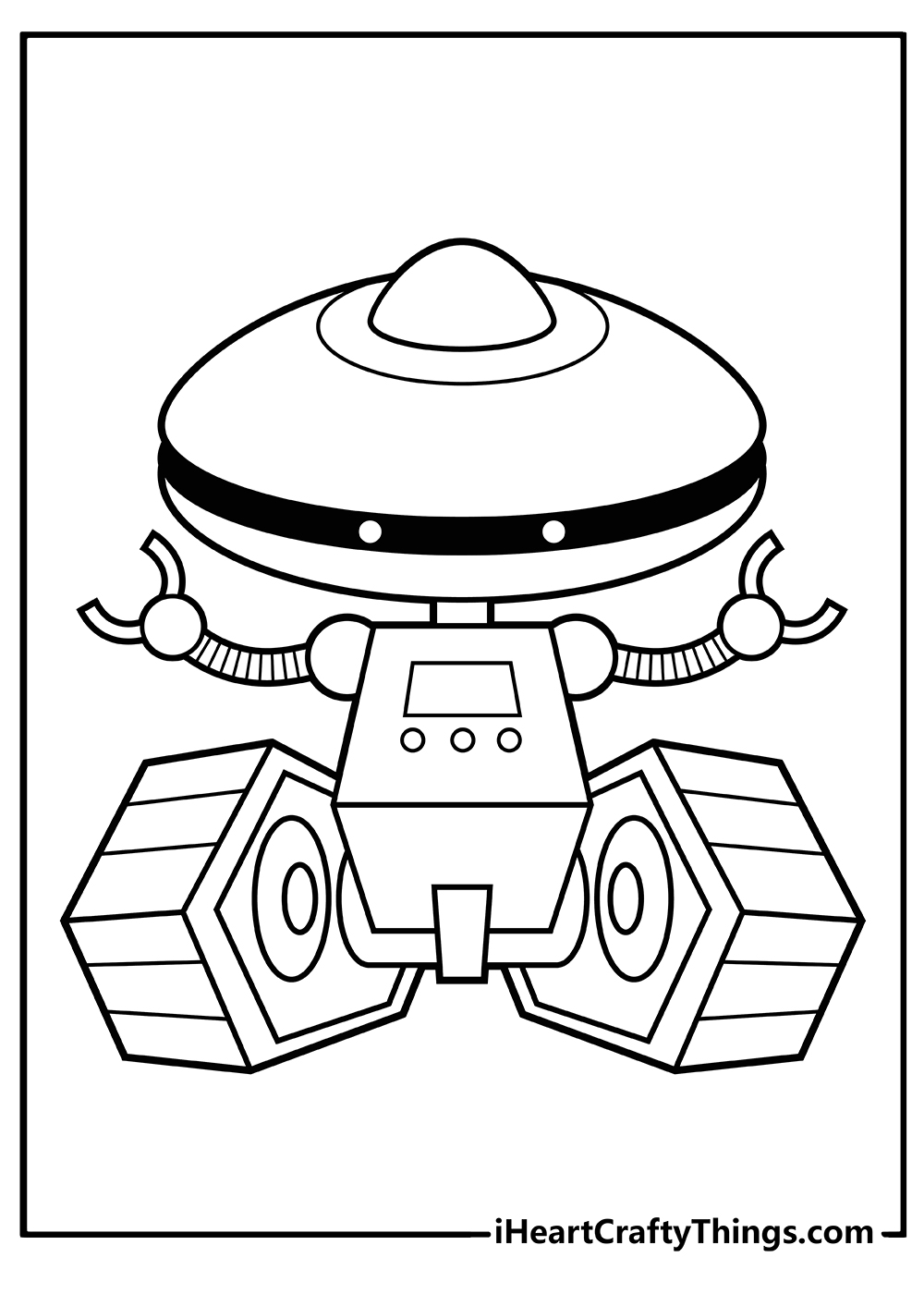 Isn’t this the most adorable robot you have ever seen? We sure can’t think of another one.

Actually, one could say he looks like a modern version of Wall-E, simply because this robot has the same friendly and cute expression. You instantly want him to be your buddy.

Just look at this robot’s oval head with a smiley expression on the face and body that looks like a teddy bear – don’t they make you think of a stuffed toy? Of course, he is a robot!

Still, we cannot help but suggest a pastel color for this delightful robot. Maybe choose a light grey for the ears – or bolts. 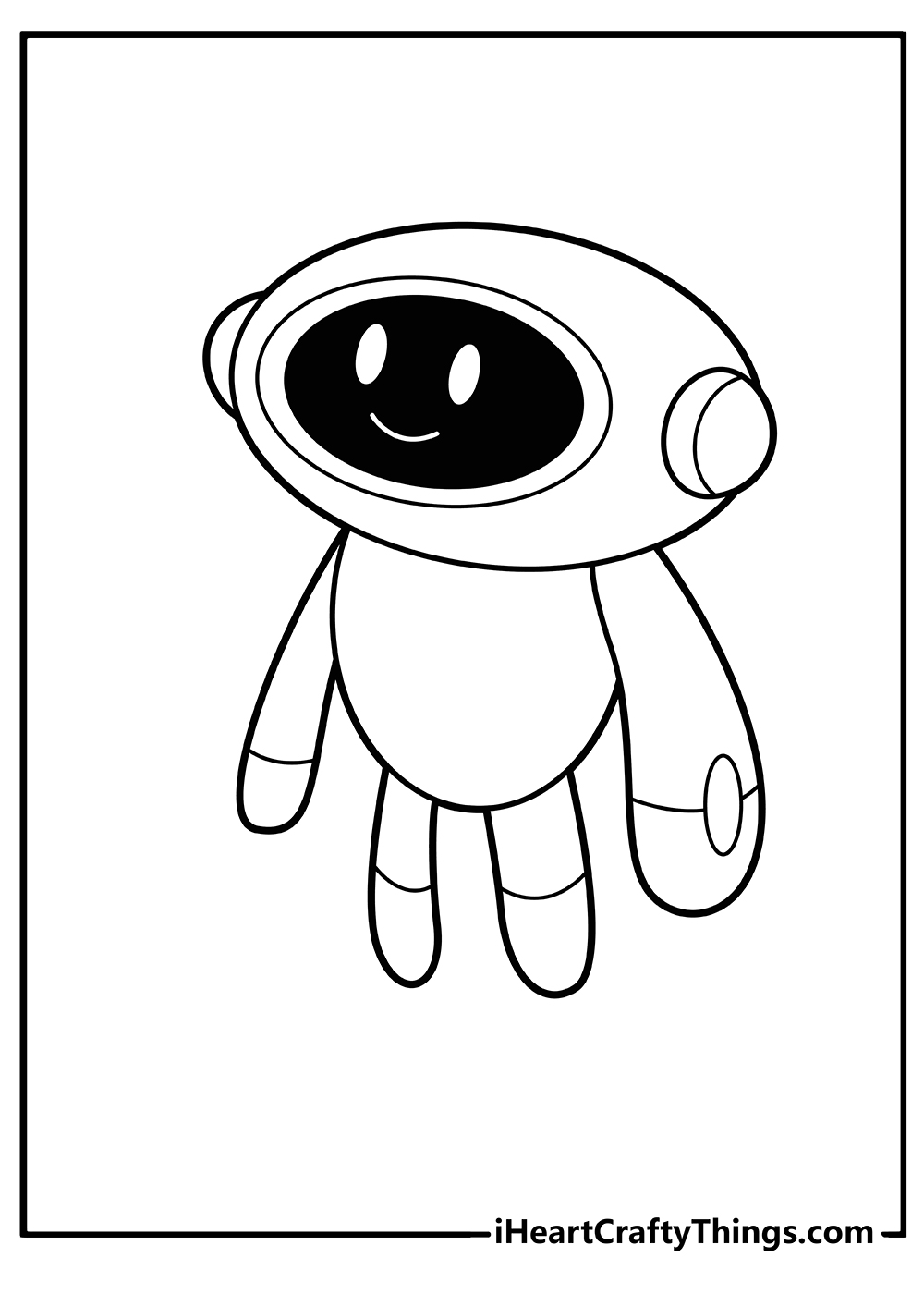 Who is this tiny robot with such a surprised look on his face? We like to think that he is incredibly curious and always wants to learn new things.

Maybe he and your child will have many things in common. With the robot’s curiosity and your child’s creativity, this robot printable sheet will be a delight to color.

He has a small body, resembling a cylinder, small arms, and a pair of wheels so he can easily transport from one place to another.

Bring him to life with the colors of your choice. For example, neon shades would probably look good on him. 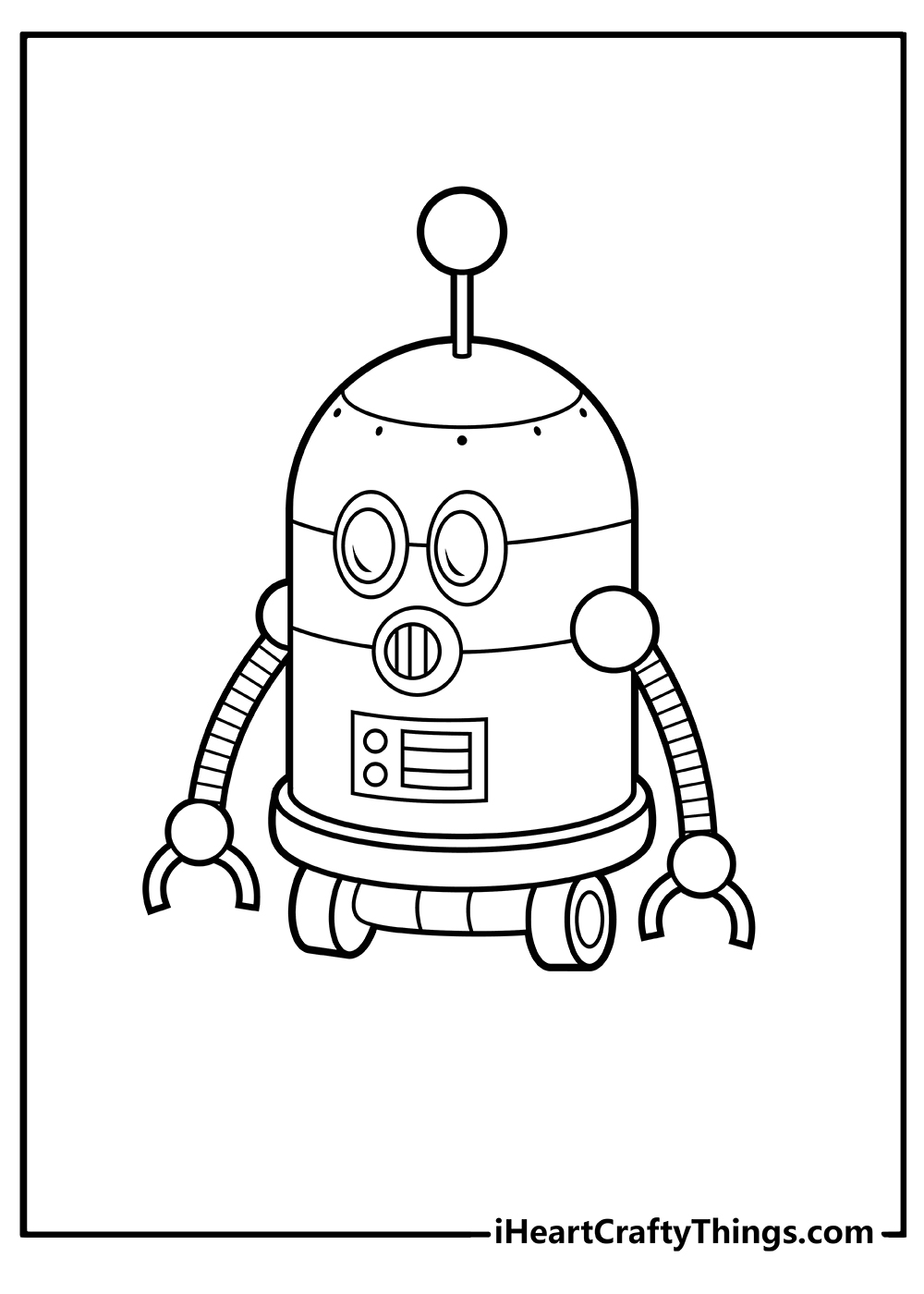 When you first look at this large robot, it almost seems like The Hulk robot toy.

Don’t worry; he is not dangerous at all! With his posture and slightly severe expression, he looks like a protective bigger brother.

What color pops into your mind when you think about The Hulk? Green, certainly. So, if you see the same resemblance, you may want to pick a shade of green to color this robot printable sheet.

However, there are no rules here. Just let your creativity run while and play around with various colors and tones. 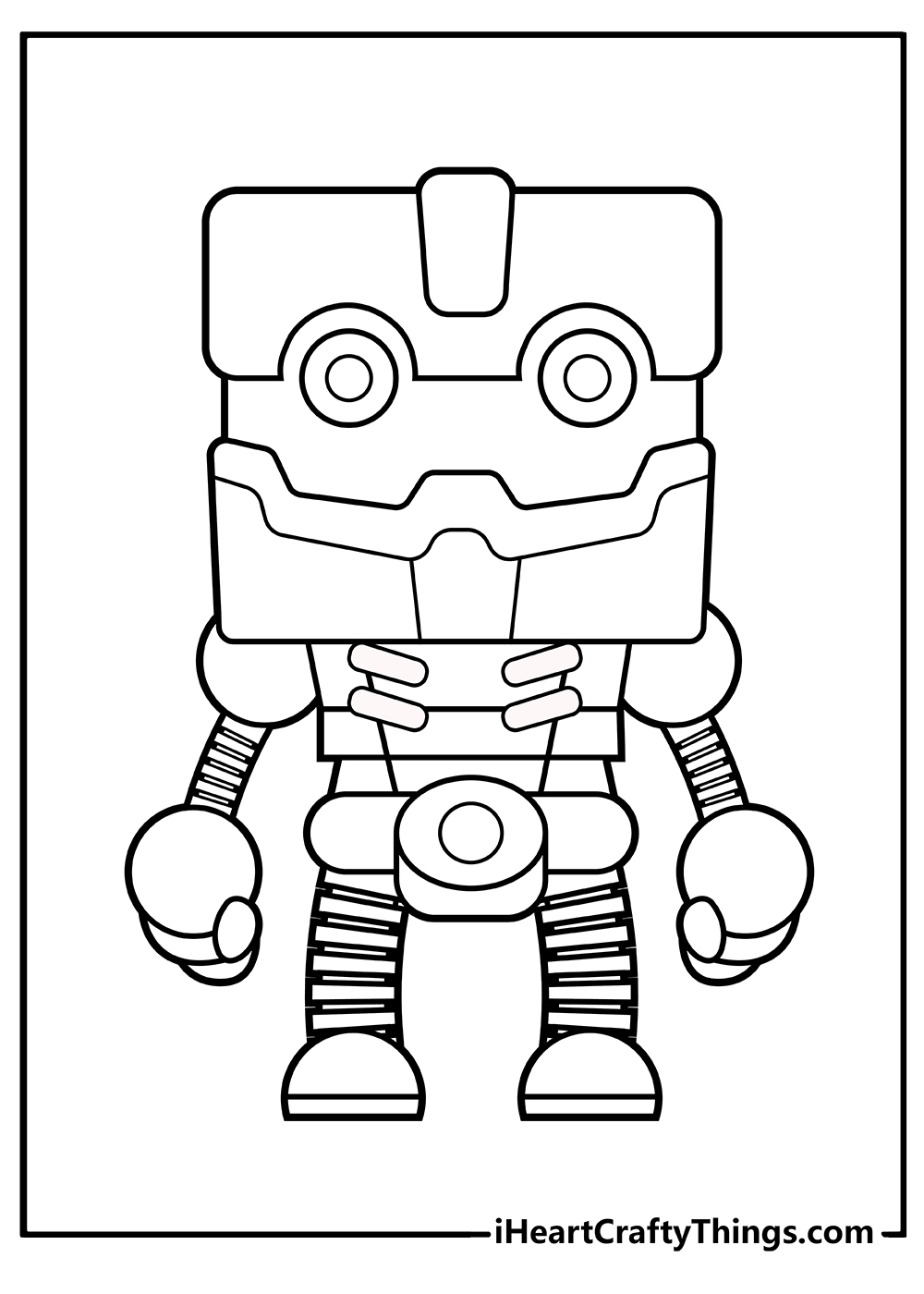 You might think – how is it possible for this fantastic robot to move around with one single wheel? There is no right or wrong answer.

It is simply this robot’s charm that sets him apart from the others. Not to mention he looks like RoboCop’s sidekick. Wouldn’t you like to see a movie with both of them? We sure would.

Given his appearance, you might want to add silver grey, blue and purple tones. He would definitely look like coming from the future! 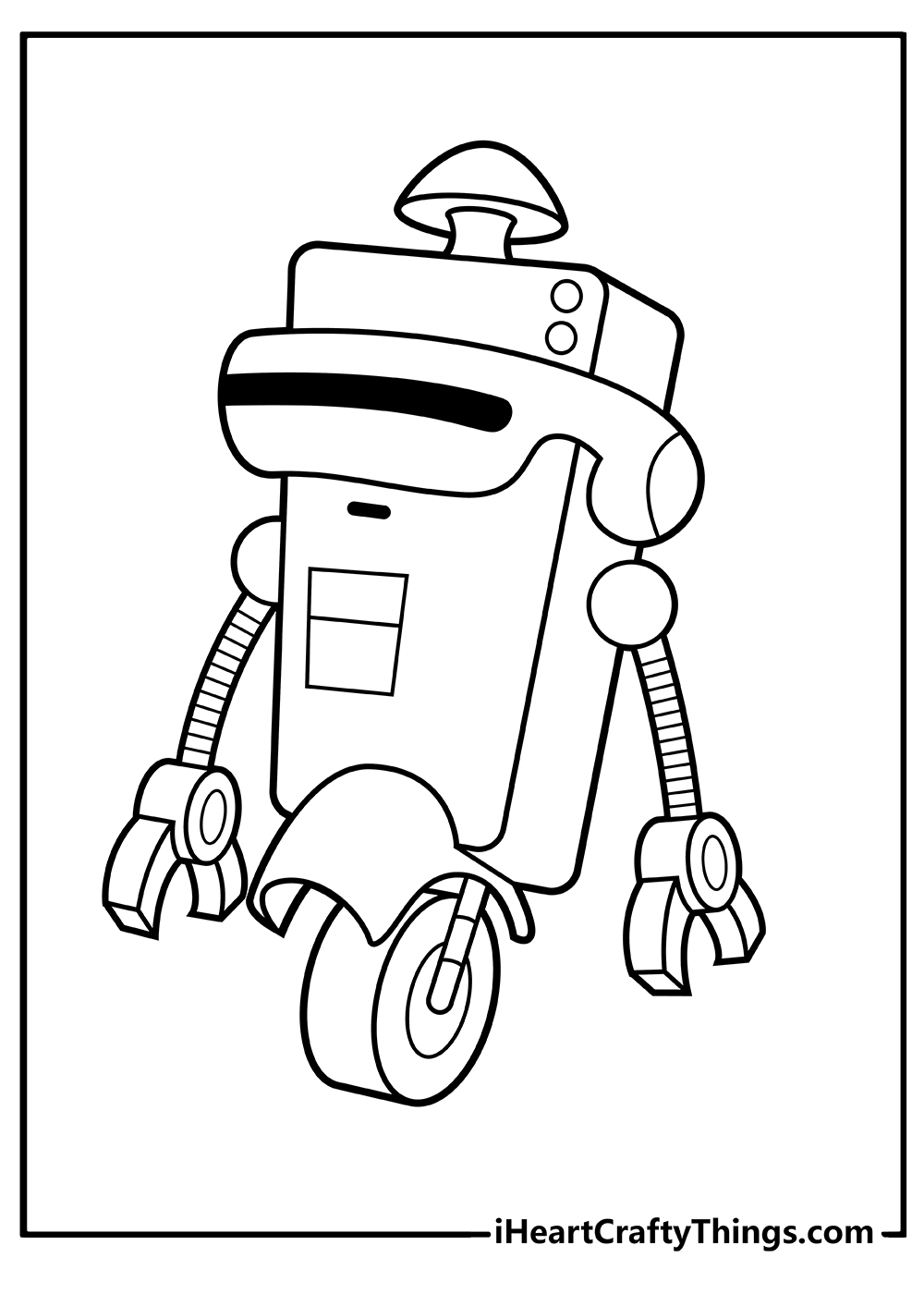 This second to last robot coloring page features a captivating and impressive robot.

With so many different styles of robots, it is close to impossible to get bored. Instead, you are just excited to see the next one and cannot wait to color it.

If you ask us, this robot looks like that wise person in everyone’s life who always has interesting stories to tell or helpful advice to give.

It might be because of his expression – it almost feels too serious or as if he is thinking about something.

Try using a dark blue shade, turquoise, and a bit of red for this fascinating robot. 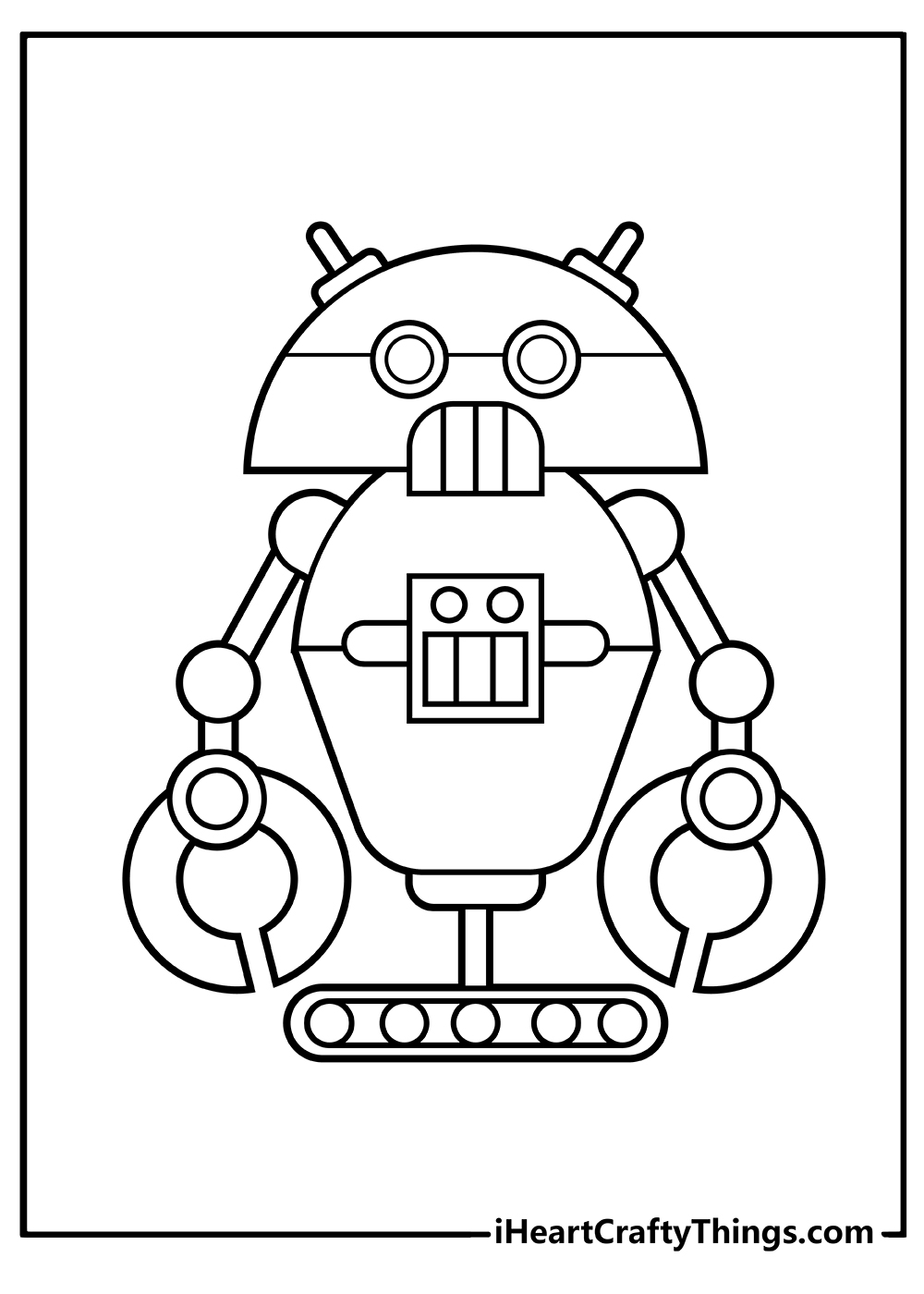 Don’t you love it when you see a cute robot with a smile on his face? It instantly put a smile on your face as well.

With his antenna swinging in the air, those same hands resembling crab pliers, and a rectangular-shaped body with rounded corners, you cannot deny his friendly and welcoming spirit.

By looking at this robot, you want to bring him to life with bright and contrasting colors, similar to those used for Lego pieces.

The cheerfulness he conveys would be better showcased with a colorful aesthetic. 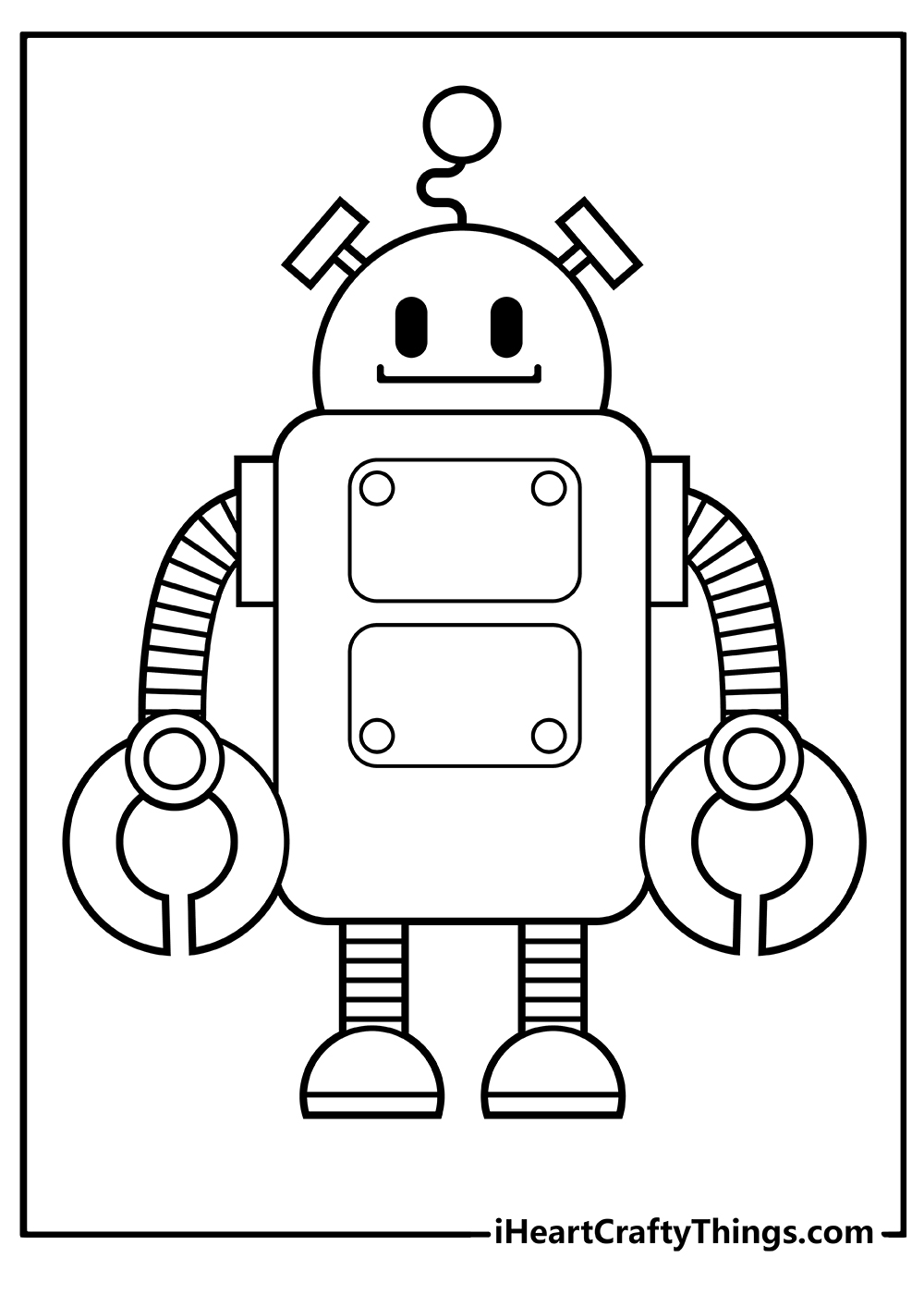 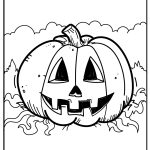 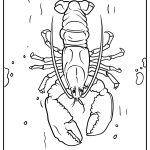