Teaching your children about outer space is quite exciting.

Elementary schools do not usually deep dive into the expanses of the solar system, so your children may be familiar with planets, but they don’t know too much about them.

If you’re looking for a fantastic way to capture their attention and help them learn about outer space, this collection of planets coloring pages can help.

Planets are fascinating, so learning about them to any degree should always be encouraged.

Here are planets coloring printables you can download and print for free!

There are eight planets in the Solar System, and all orbit the sun.

You may have grown up learning that the Solar System has nine planets, but astronomers decided that Pluto is a dwarf planet and should not be listed among the larger ones.

This coloring page depicts a planet that looks like Saturn, or the windy frisbee planet as your children may know it.

Saturn is well-known for the rings that circle it. Did you know they are made up of chunks of ice and rock?

Around Saturn and its magnificent rings, you can see other rocks and asteroids floating in space. 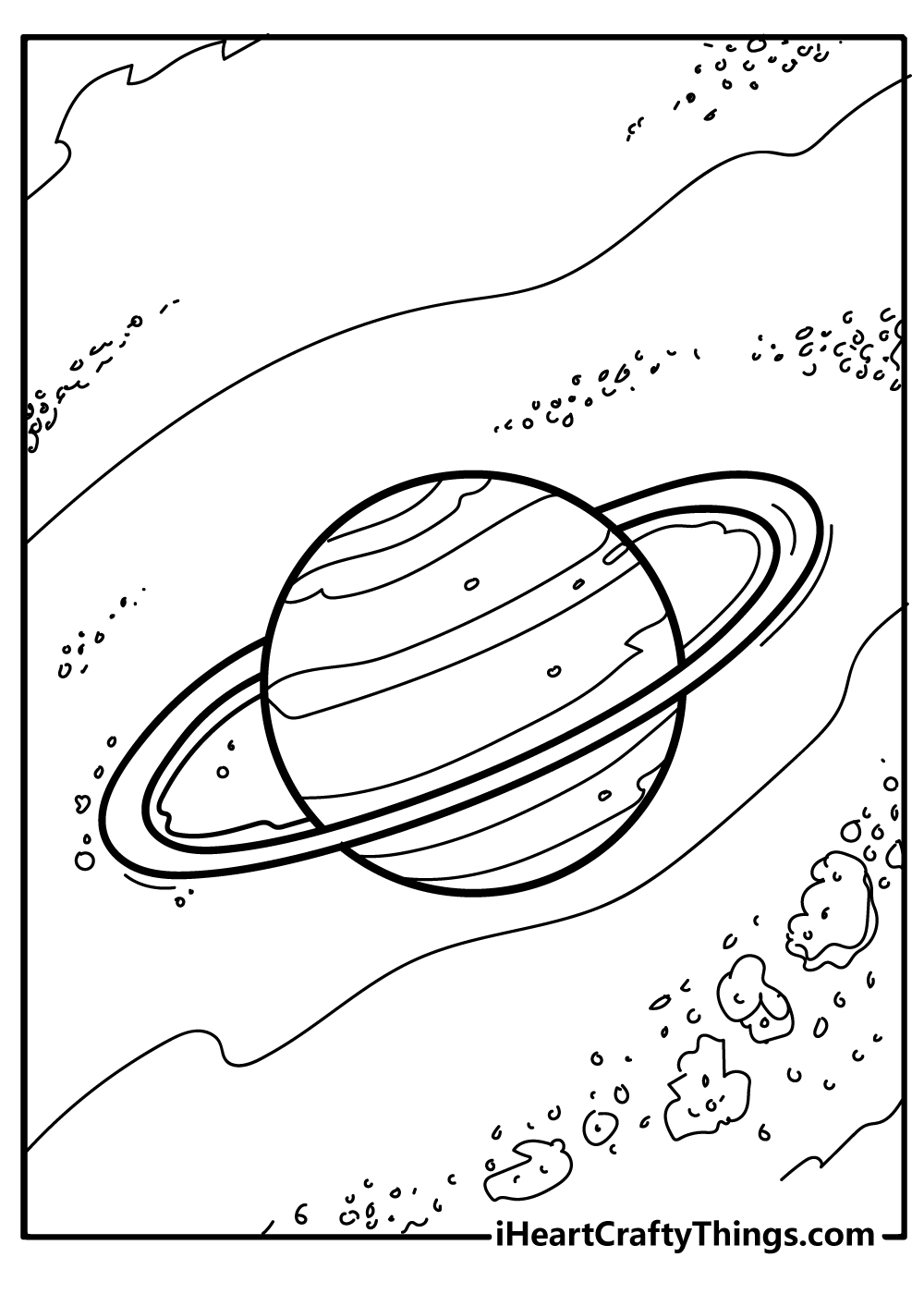 Let’s discover another planet. This one looks like our closest neighbor, Mars.

Your children may also know it as the red-colored planet because of its (you guessed) reddish appearance, which results from the rusting process of the minerals that cover its surface.

The planet in this coloring sheet has intricate lines to depict the multiple formations on Mars.

Your children can use red-orange hues to paint the planet’s surface and dark shades of burgundy and brown for the craters. 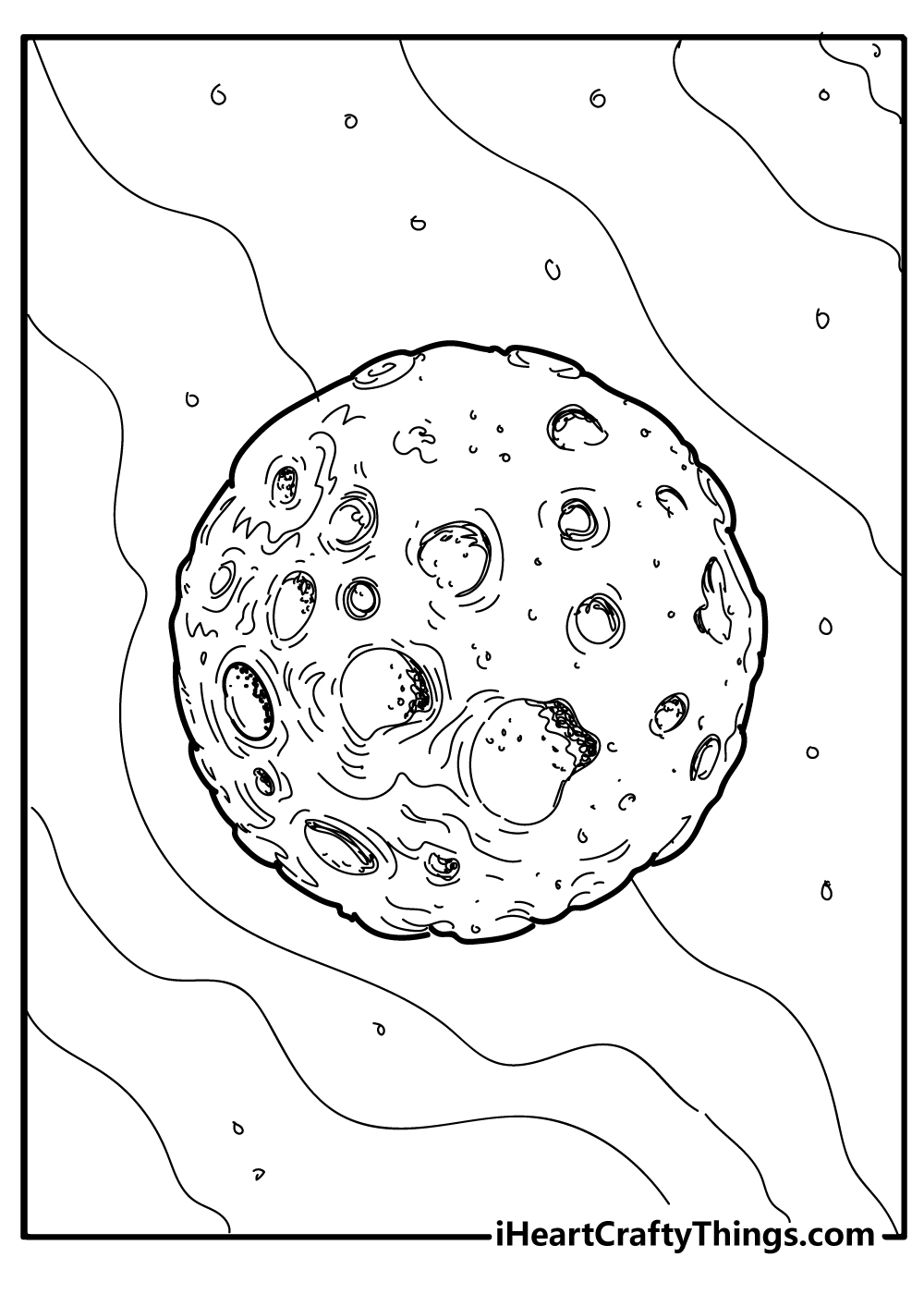 Earth is our beloved home planet and the only world in the solar systems where humans can live. Teach your children to take time to appreciate our planet because, without it, we wouldn’t exist.

Planets coloring pages can help you instill a sense of appreciation and awe into children.

For example, this Earth coloring printable shows it floating in space surrounded by dust and celestial bodies.

You can see a vast portion of the mainland in this printable sheet, so you can use it to help your children identify each continent. 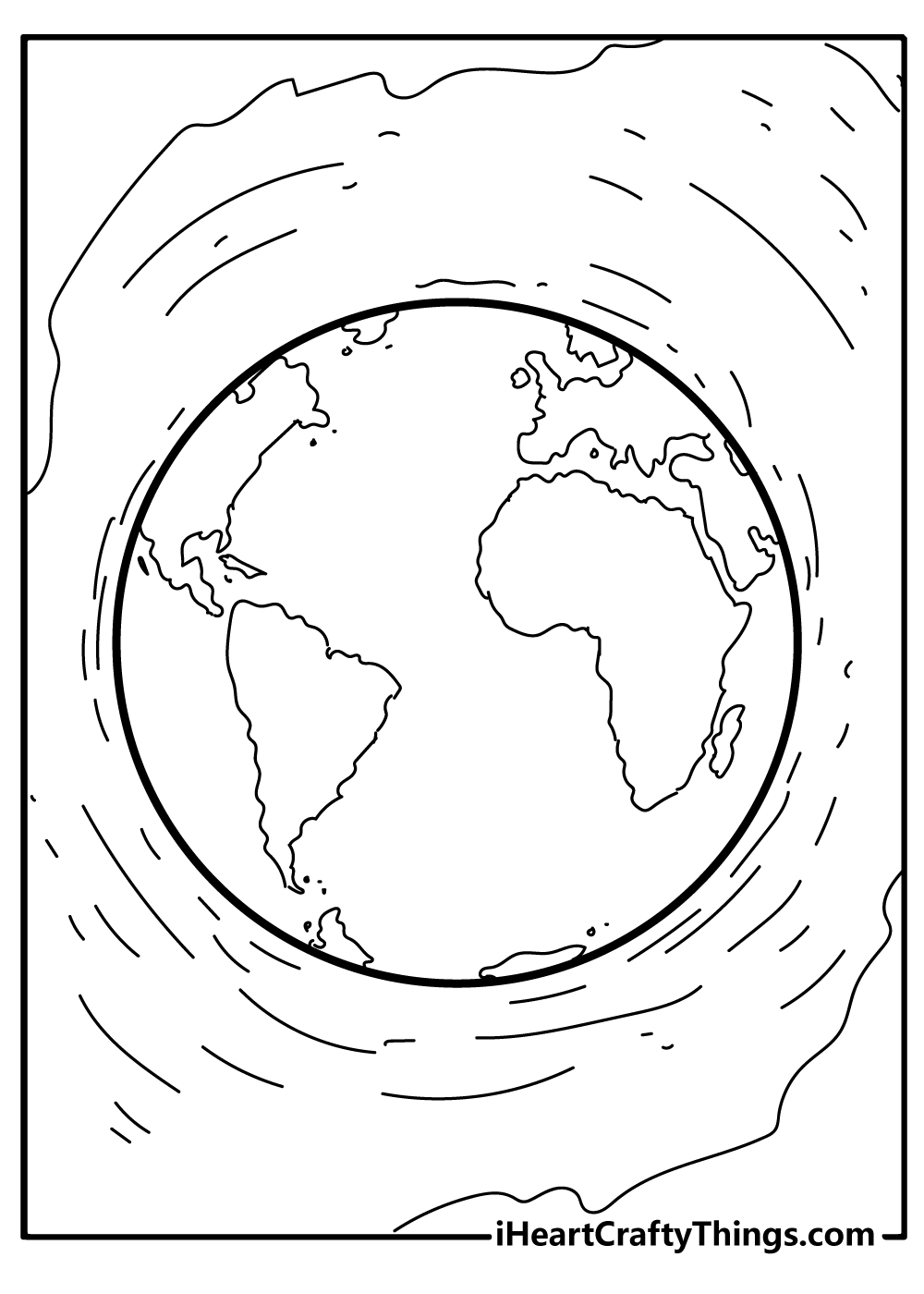 Did you know that Jupiter is the giant planet in the Solar System? Astronauts state that it’s so large it can fit all the other planets inside it.

This big red planet is a hue gaseous storm that can adapt over 300 Earths.

This coloring sheet shows the waves the storm creates from the gases that float above the planet’s surface.

Your children could paint them using yellow, red, and orange shades, or use other colors if they don’t like these.

Before coloring this printable, don’t forget to tell them it has 62 moons, so they can leave space on the background to paint a couple of them. 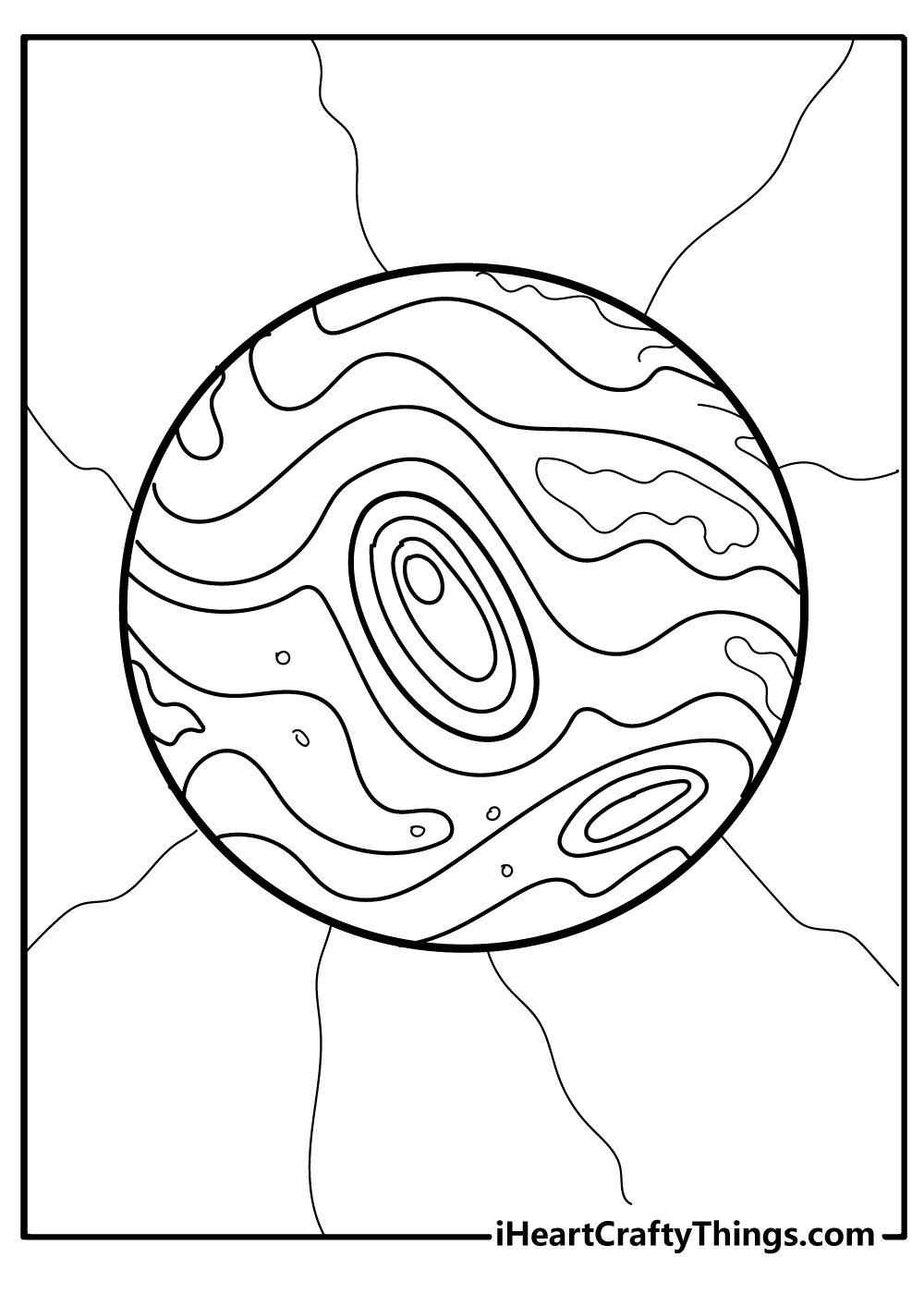 Besides the eight planets in the Solar System, there are many other ones in the universe, each more interesting than the other.

This planet coloring sheet could show the magical Jupiter or another planet from a system we didn’t discover yet.

Your children can use their creativity to paint this planet in their preferred shades. Please encourage them to choose a different hue for each line and shape.

The background of this printable sheet is a classic one for a space coloring page. Your children can use different shades of blue and purple to make it resemble outer space. 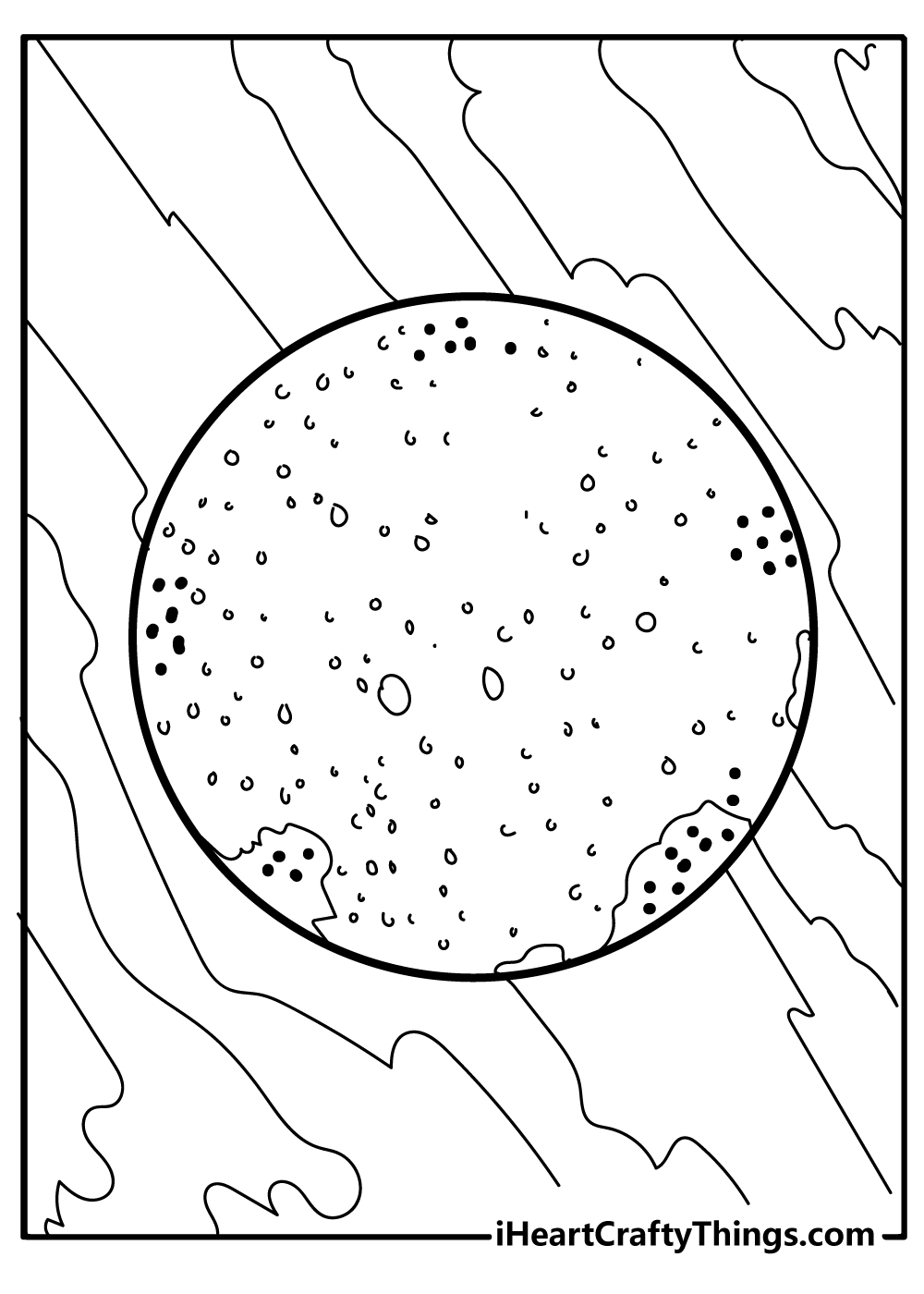 Is it just us, or do you also see giant bugs walking over the surface of this planet? It probably is an alien planet situated far away from our Solar System from its look.

This planet coloring sheet depicts a globe with craters, clouds, and other strange shapes resembling crabs or ants.

From their looks, they are probably giant beings that gained the ability to walk on the exterior layer of the planet without fearing the cosmic winds. 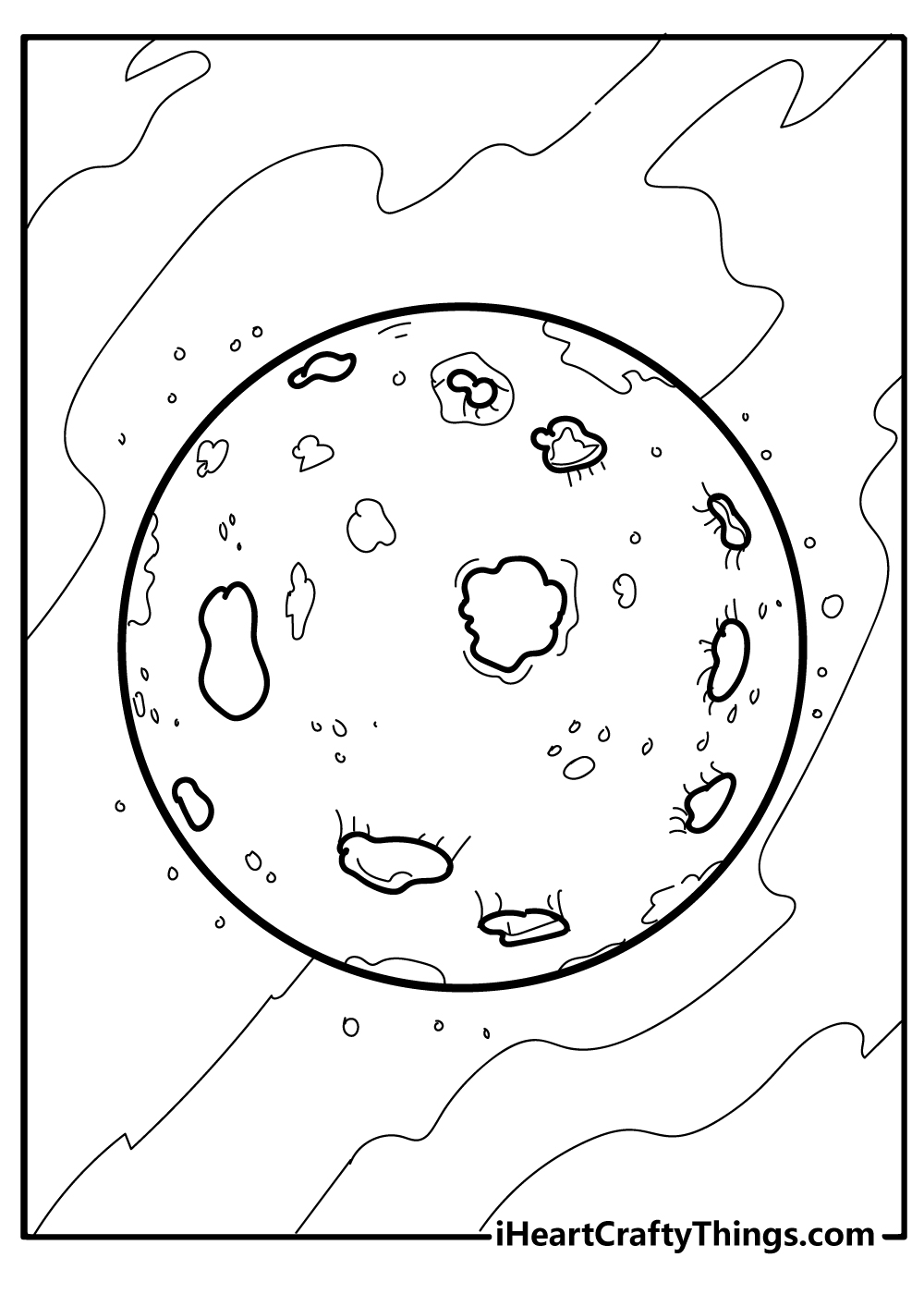 Saturn isn’t the only planet with rings to surround it. Uranus or the ultra-cold planet also has a couple of them. Uranus and Neptune are the planets where the ice giants built their kingdoms.

One interesting fact about Uranus is that it spins on its side and its north pole has nighttime of 21 years, then 42 years of daytime.

No human would survive the dark winter, but the frost giants seem to really enjoy it.

We created the background of this planet coloring page to resemble the out space with dust, celestial bodies, and winds that move the extraterrestrial elements from one place to another. 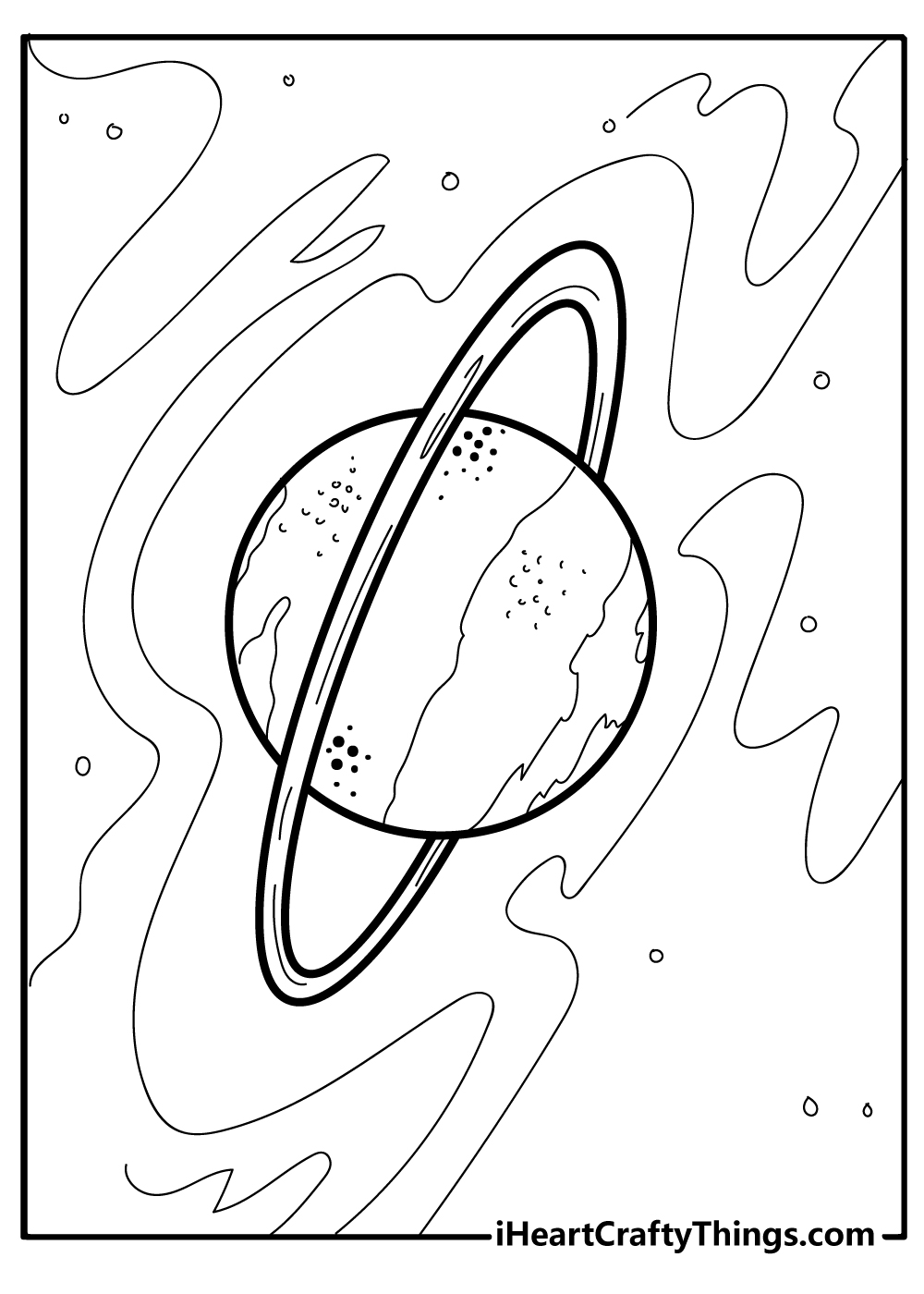 Speaking of Neptune, here is a coloring page of the planet situated furthest away from the sun. Its entire surface is made of icy materials, so there’s no wonder the frost giants find it the perfect home.

Planets coloring printable sheets encourage children to use their creativity and imagination.

For example, this coloring page that includes a planet that looks like Neptune requires them to mix different shades of blue to make it look like a frozen globe.

We love this coloring page’s background because it features stars of different stars and multiple dwarf planets and moons. 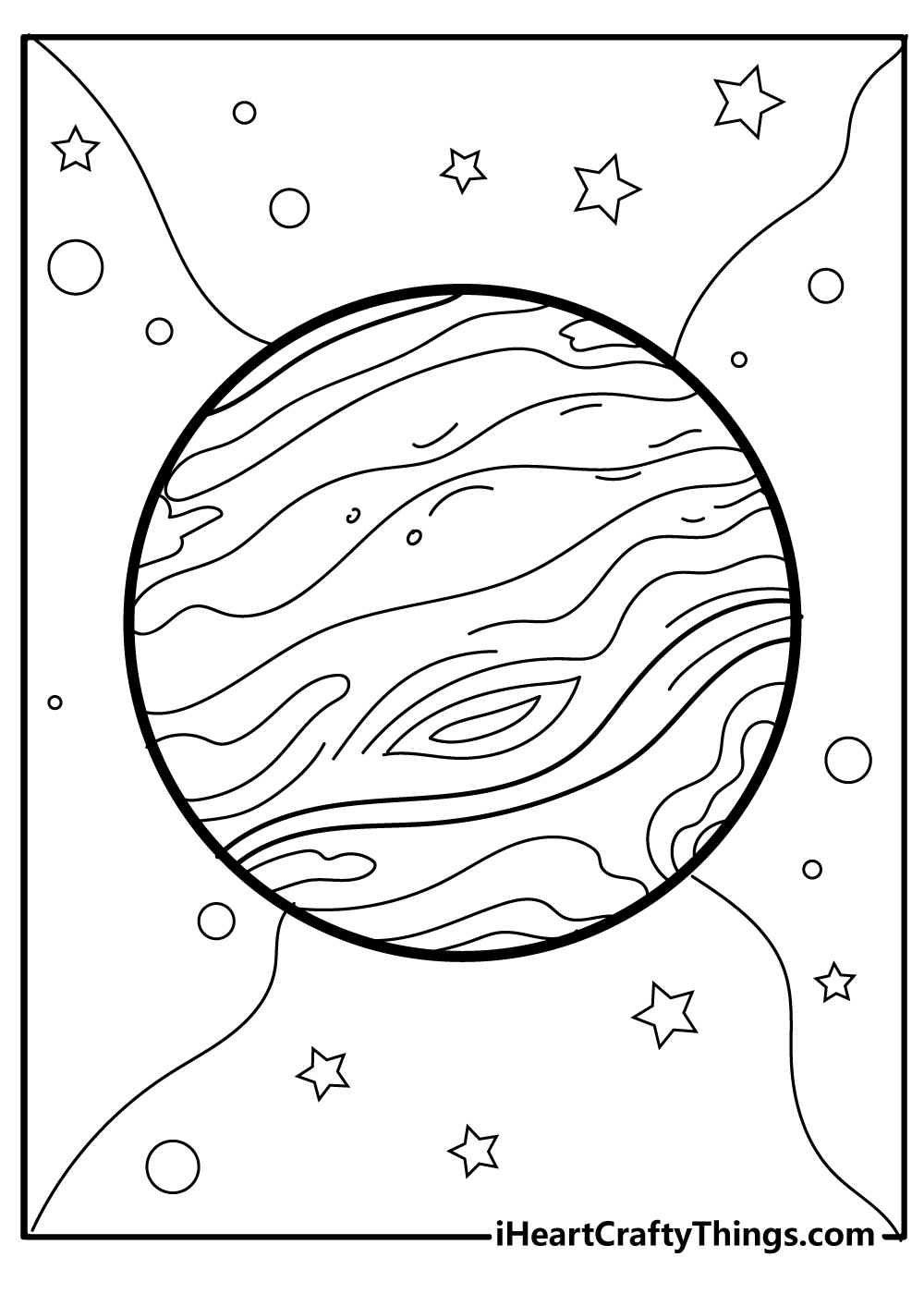 Did you know that there are five major dwarf planets in the Solar System, including Pluto?

The interesting thing about them is that they’re mega rocky and cold, and they cannot support human life. However, it doesn’t mean that other creatures cannot call them home.

The globe from this coloring page can be painted as one of the dwarf planets or in any other way your children find it suitable.

If they don’t want to use blue shades to make it look frozen, they can play with brighter hues like pink, yellow, or green. They can even paint each shape and layer with a different color. 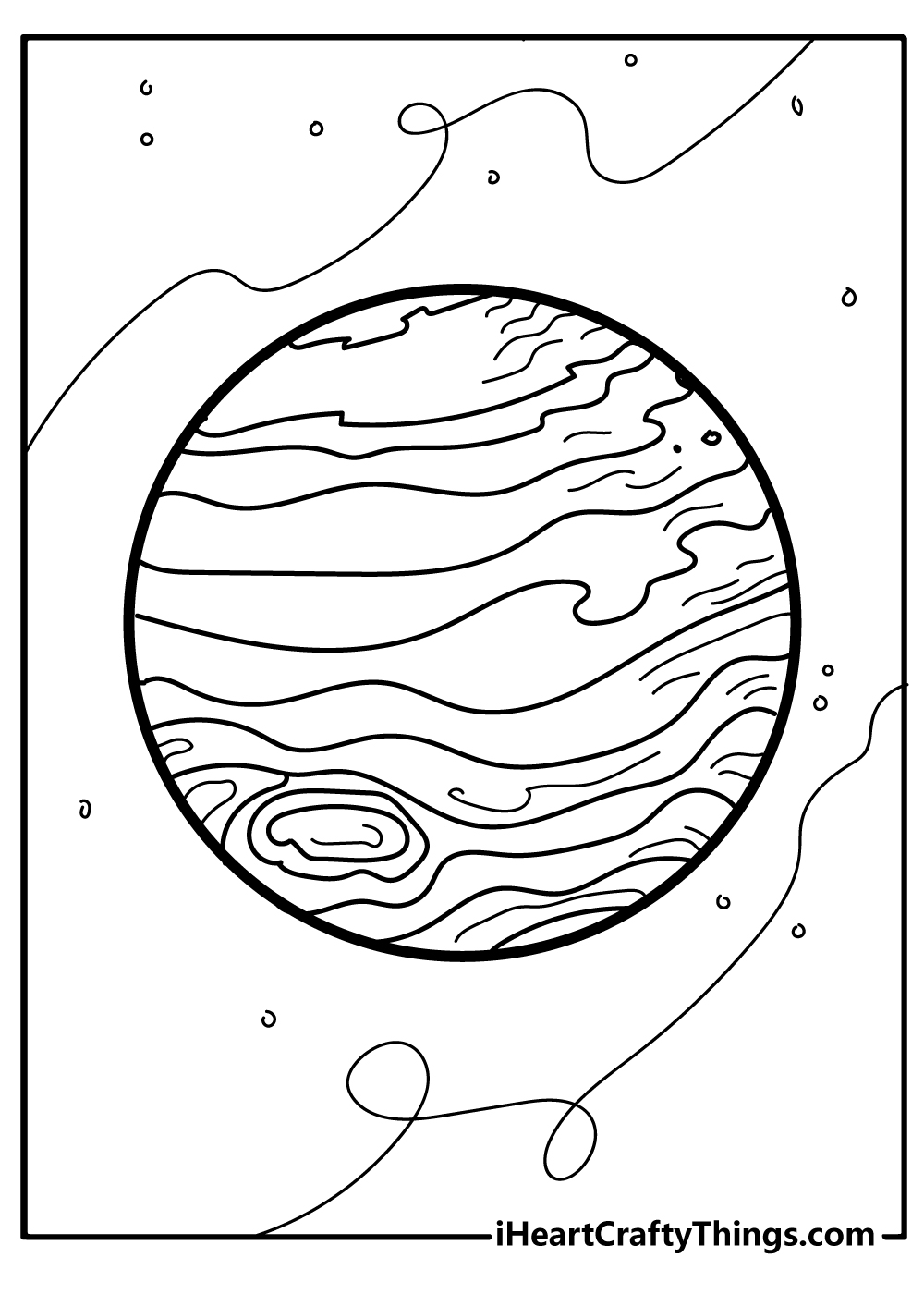 Here we have another planet coloring printable that shows a planet with various shapes and surfaces.

Your children probably love to paint this kind of planet because they allow them to play with colors and mix different shades.

This printable sheet shows a planet with large areas of land and cloud shapes. Its background is quite simple, but it allows your children to use their imagination to paint the globe’s surroundings.

Before downloading planets coloring pages from our website, take a visit to your local planetarium to show your children how the planets look and teach them about the Solar System. 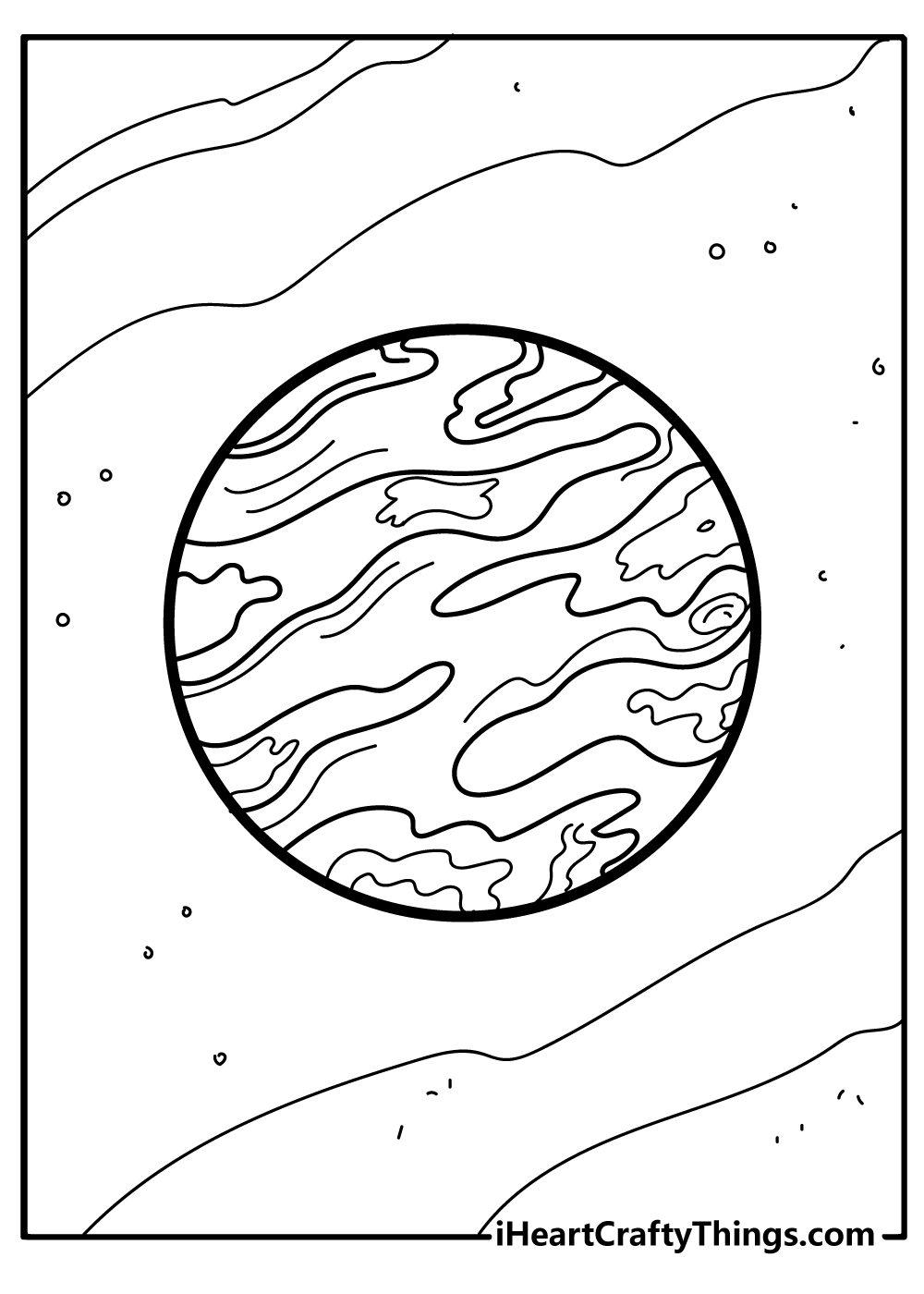 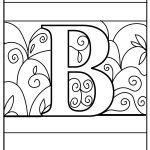 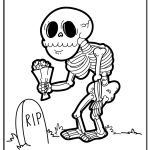