Godzilla is a dinosaur with an atomic breath that looks like a tyrannosaurus rex due to its tiny arms.

The character first appeared in 1954 in the movie called Godzilla, where it was portrayed as a terrestrial animal that evolved from an ancient sea organism.

The monster relocated from the ocean waters to the land because of the repeated bomb testing that disturbed its underwater habitat.

Godzilla is a popular character among children due to its extraordinary powers. We created Godzilla coloring pages you can print for free for your children to paint.

Let’s join the famous titan in a new adventure!

Godzilla is the hero of cartoons, movies, comics, and games, and children of all ages love it. This coloring page shows a full-sized Godzilla that seems to head somewhere.

Maybe it just left the water to visit the land, or perhaps it is on a stroll. Even if its only purpose is to destroy cities, it seems pretty calm on this page, so maybe it just walks around.

This Godzilla coloring printable shows a glimpse of the monster’s back, lined with armored plates that look like big bony maple leaves, and its lizard tail. 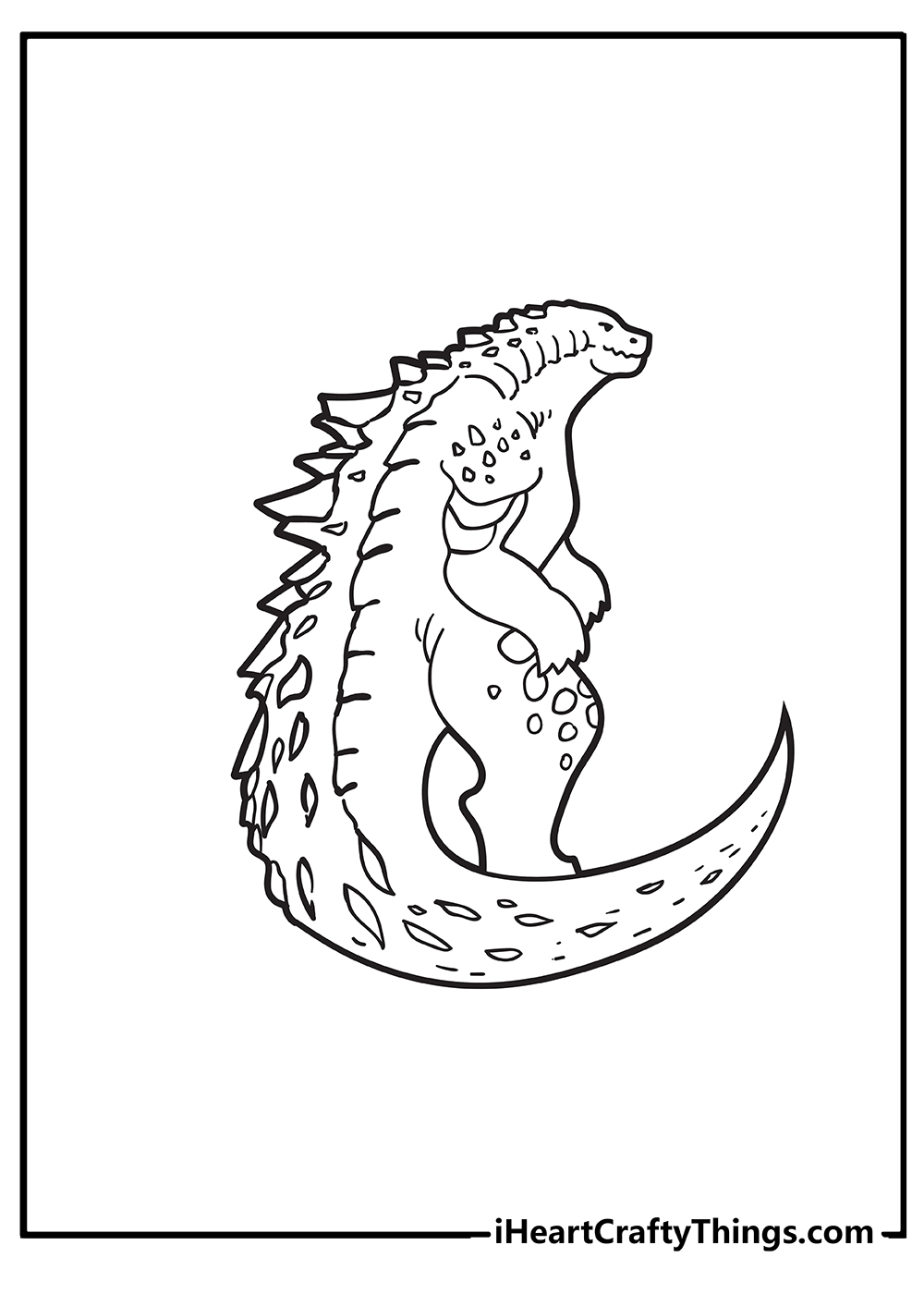 Godzilla coloring pages are great for children who find stories of monsters and destruction entertaining.

It seems that Godzilla is ready to use its atomic breath in this coloring page because it has an open mouth and appears very angry.

The monster from this printable sheet looks more atrocious than the one above because it has larger armored plates protruding from its back.

It also has pointed spikes on its arms and tail, making it dangerous in a close-body fight. 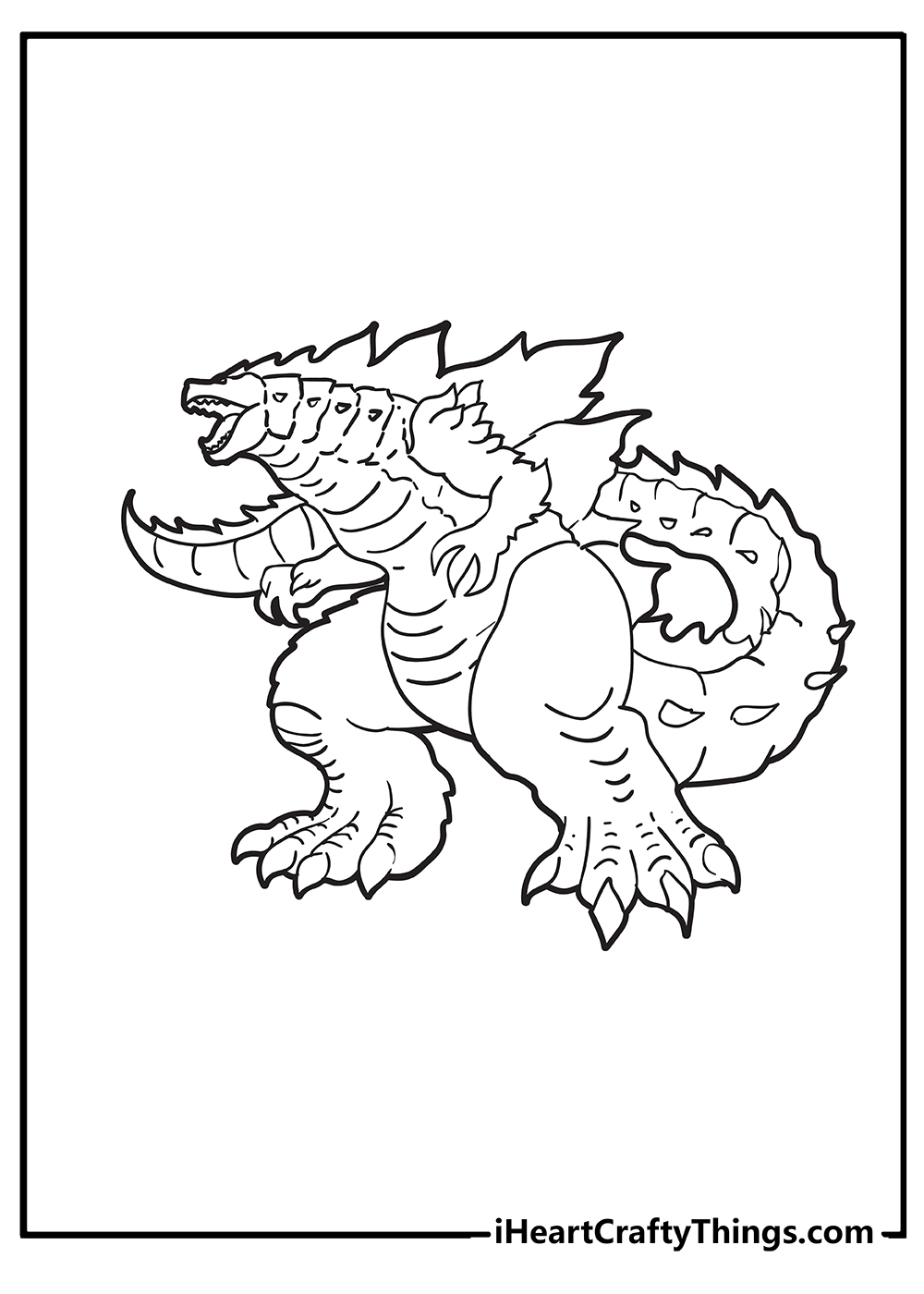 Godzilla coloring printables are a fun way for children of all ages to develop color recognition, creativity, motor skills, and focus.

The monster has a reptilian and crocodile-like look in the later movies, a rougher appearance than in the cartoons children are accustomed to.

We created this coloring sheet to depict a Godzilla similar to cartoons children are more familiar with.

It shows a monster with small arms, thick legs coated in scales, and an open mouth displaying its long teeth.

It’s not as scary as the one from the second picture, so even younger children can paint it. 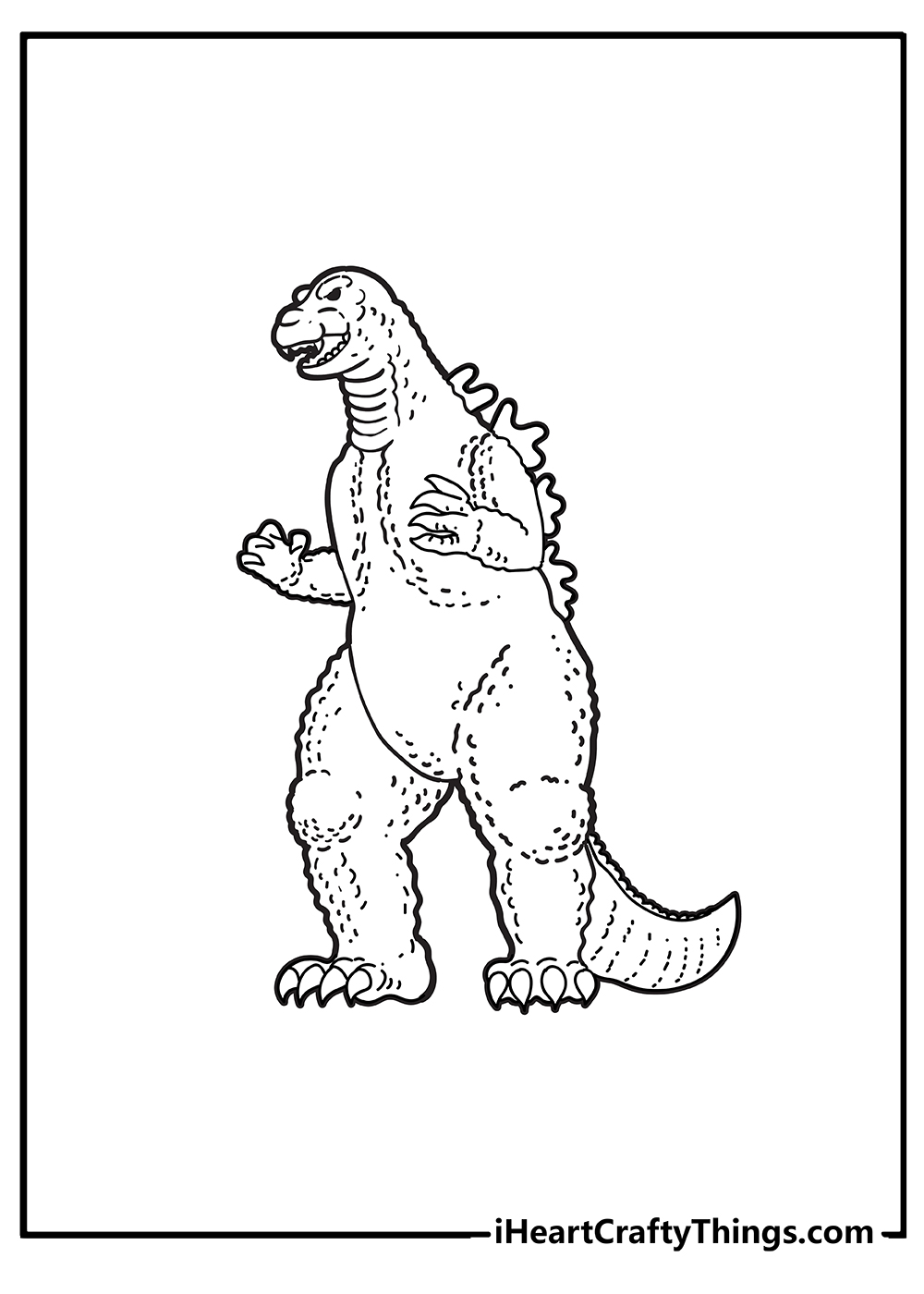 Godzilla’s signature power is its atomic breath, and this coloring page shows it in its full power.

There are shapes of city buildings on the bottom side of the sheet, so the monster most likely left the water to wreak havoc on land once again.

This coloring printable sheet shows a titan with large plates that resemble flames on its back, clawed arms, and a grim expression.

Its furrowed eyebrows show that Godzilla is angry and won’t stop destroying the city any time soon. 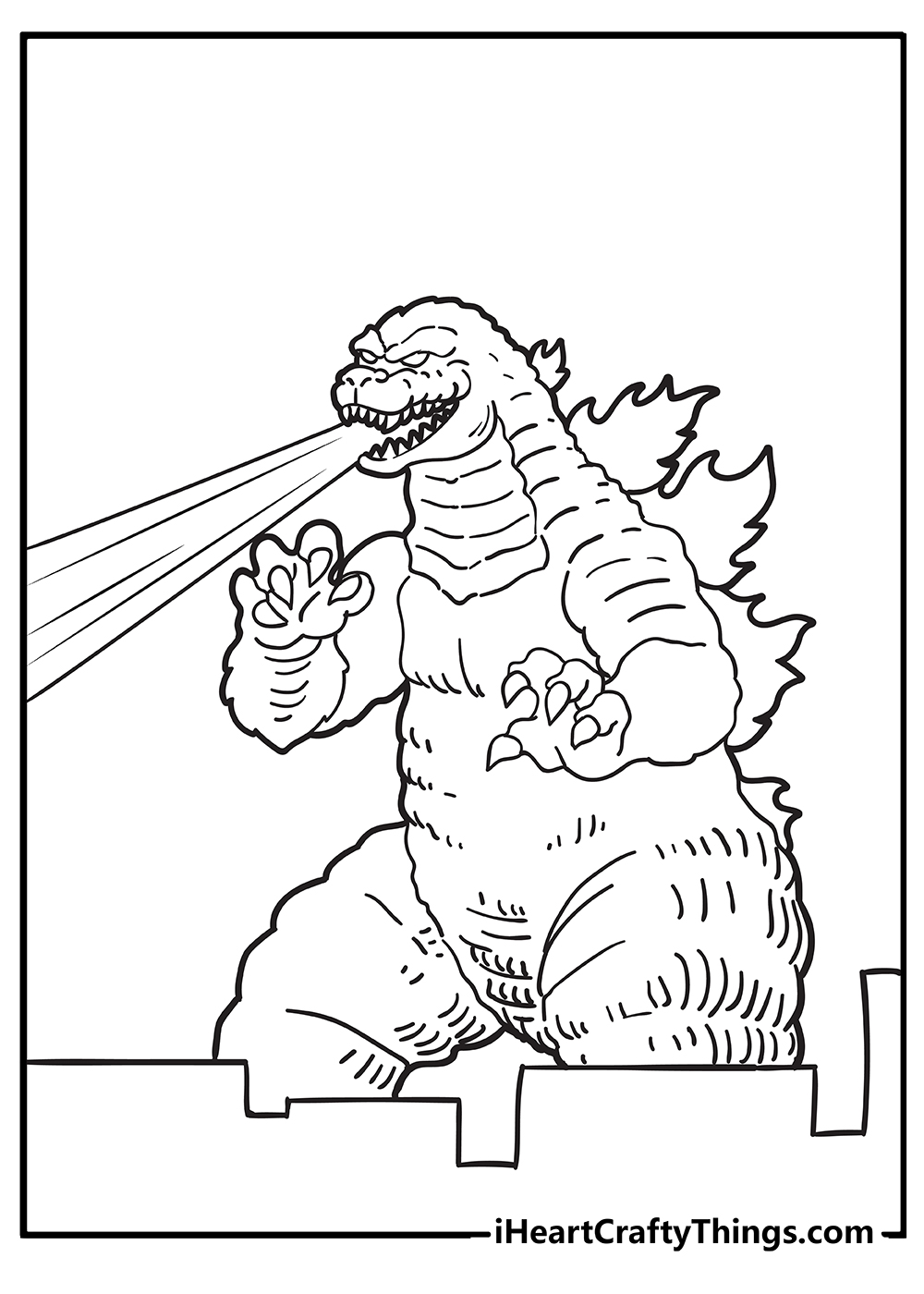 Many compare Godzilla with a tyrannosaurus rex or a walking crocodile, and if you look closely, you cannot miss the resemblance.

This printable sheet shows a walking Godzilla with enormous plated spikes sticking out from its back.

Some movies and cartoons depict Godzilla with plant-looking spikes, and we created our monster with a similar thagomizer on its back.

Its spikes start at the top of its head and end towards the point of its tail. 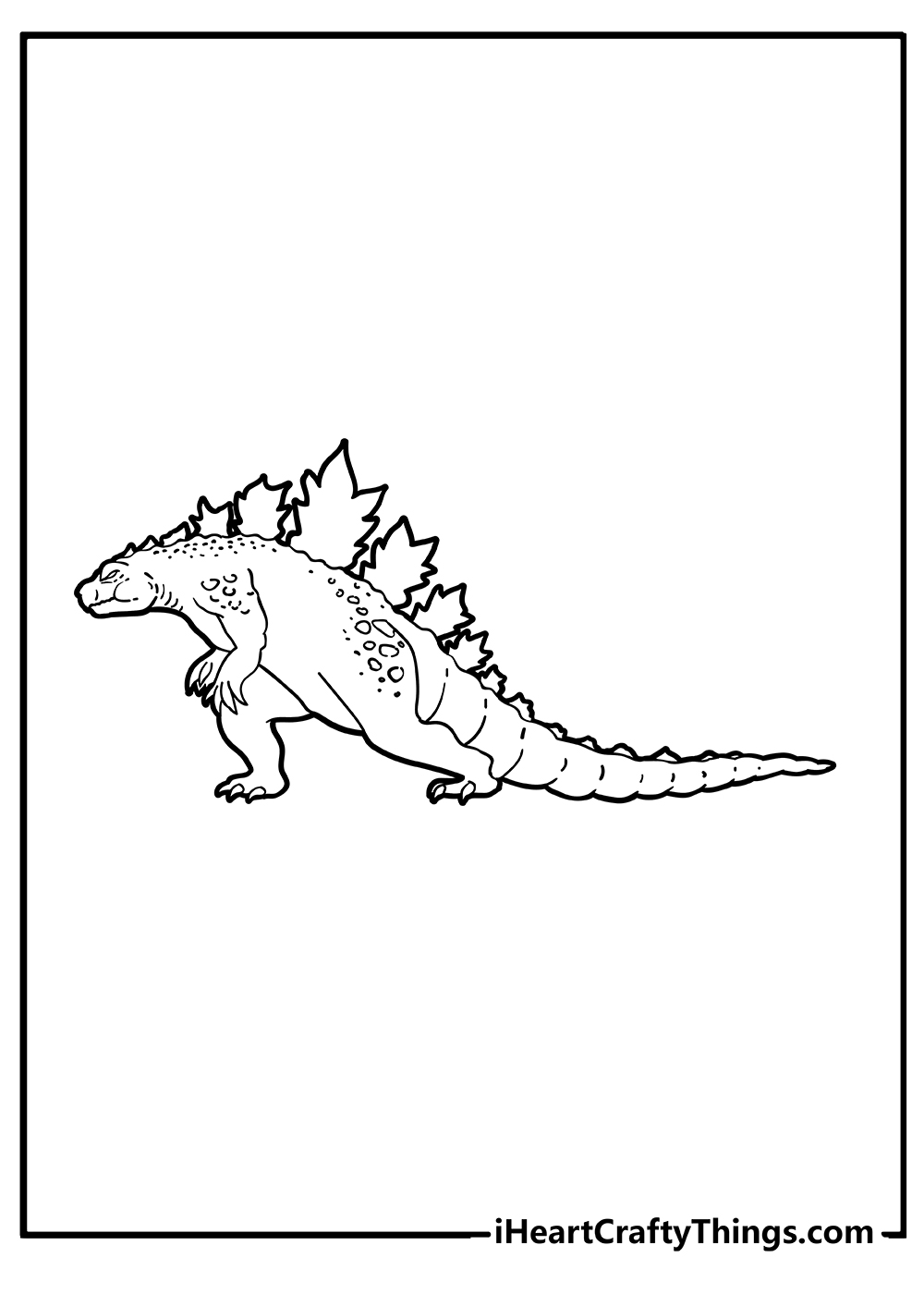 Due to its big bony spikes from its back and tiny arms, Godzilla is sometimes described as related to stegosaurus dinosaurs.

The movie Godzilla vs. King Ghidorah describes the monster as a mutated dinosaur species called Godzillasaurus.

This printable coloring page shows a scary monster walking towards prey. The Godzilla from this page looks more like a dinosaur than those from the previous sheets.

Its body is fully pleated in reptile scales, and its legs end with spiked nails. 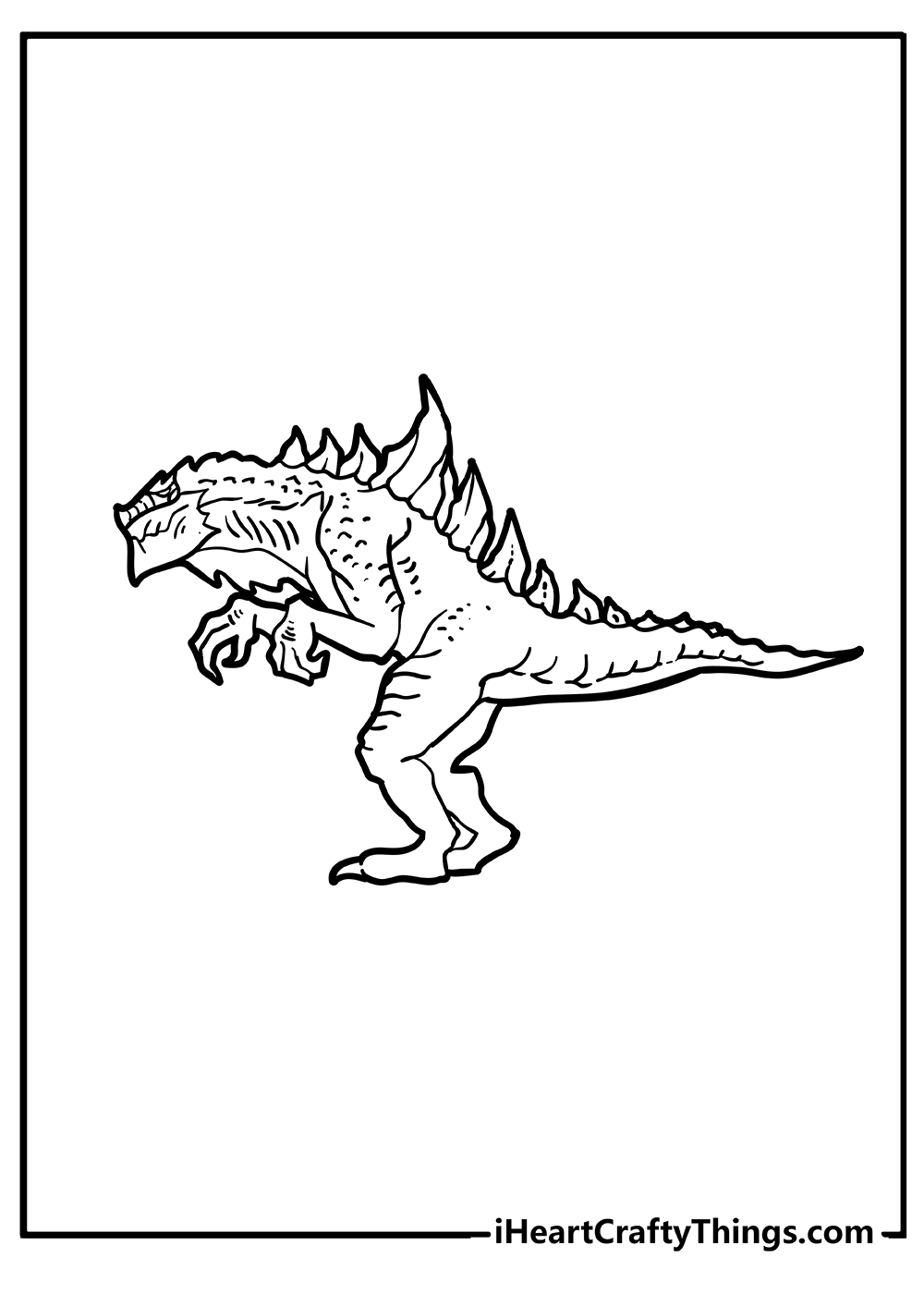 The city in the background of this Godzilla coloring page is on fire. Godzilla usually leaves the depth of the ocean to cause destruction on land with its atomic breath.

This coloring page depicts the monster roaring its specific high-pitch howl after probably just releasing atomic fire over the city.

Godzilla is an angry titan because humans testing bombs in the ocean forced it to relocate to the land.

This page depicts Godzilla with crocodile-like spikes on its back and small arms similar to a Tyrannosaurus rex. 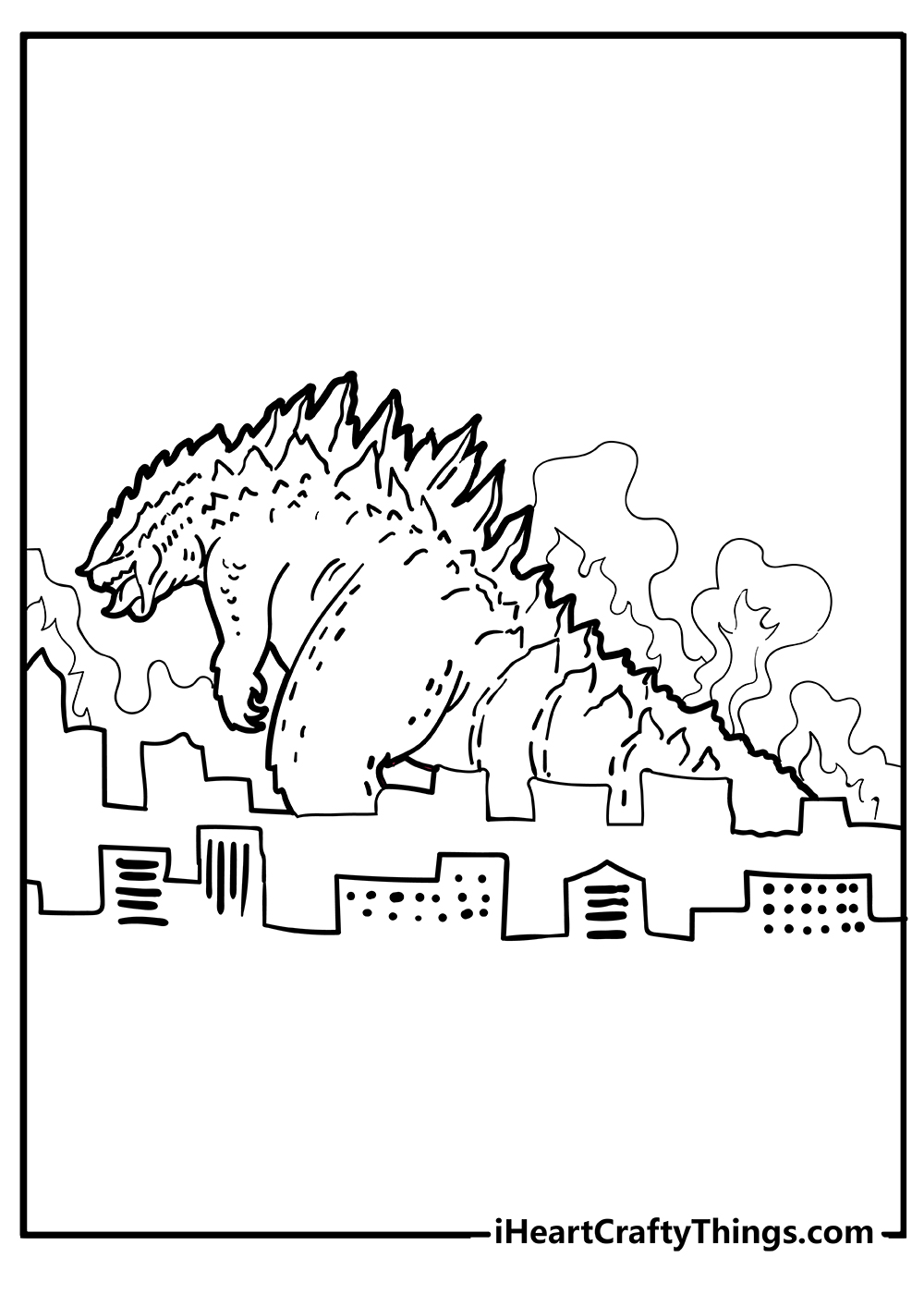 Since the monster is often described as a mutated species of dinosaurs, we created some Godzilla coloring pages showing a titan that looks more like a reptile.

This coloring sheet depicts a rather skinny Godzilla if we were to compare it with the characters from the latest movies that resemble lizards.

This mutant has longer clawed arms than most Godzilla characters and huge spikes on its back. We think its head looks like the beast from the movie Alien with small hooded eyes and a large mouth. 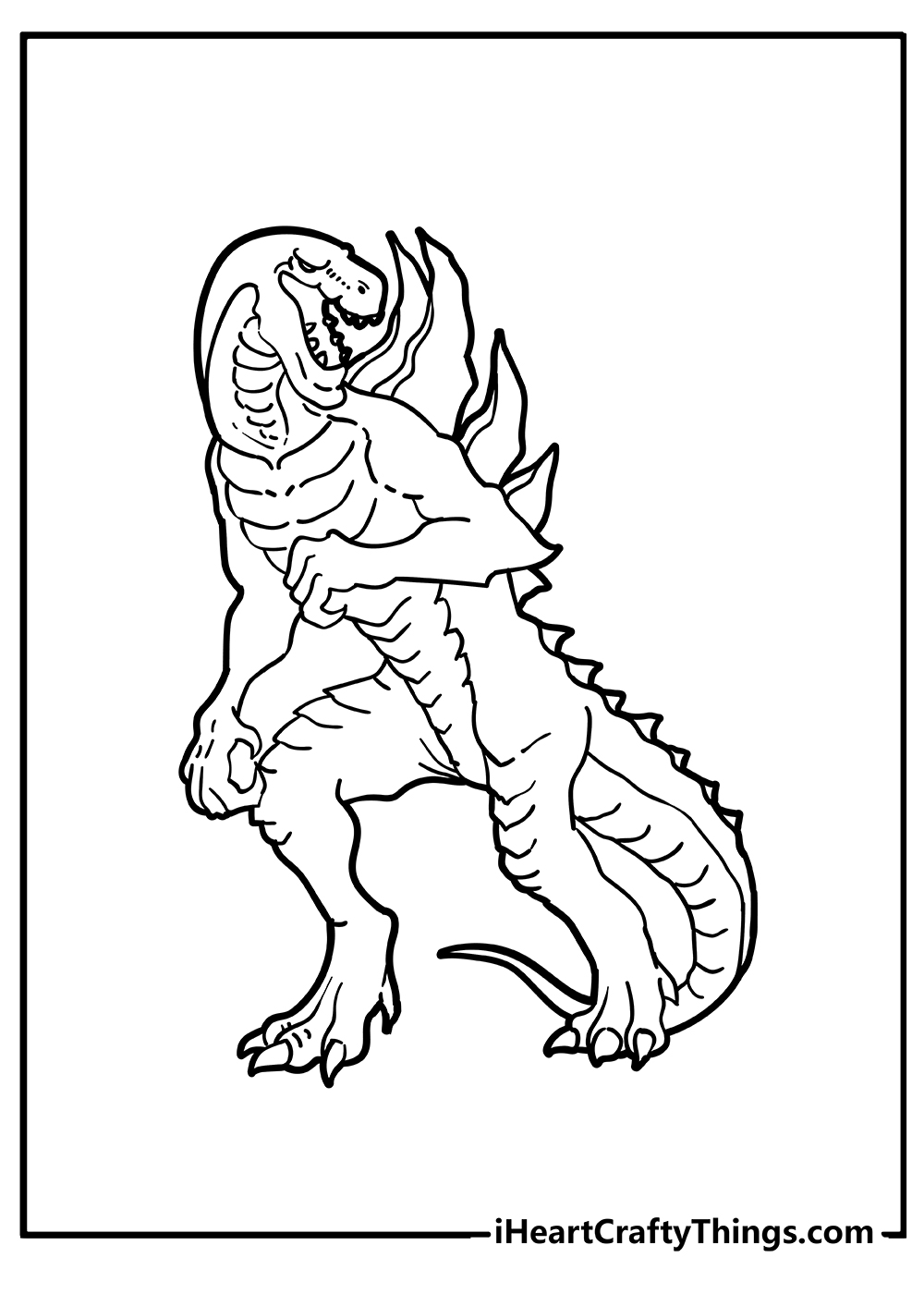 It seems a good day to leave the ocean’s dark waters and head on land to set cities on fire. Godzilla looks like it is ready to fight on this coloring page that shows the monster angrier than ever.

Godzilla has its entire body coated in scales, a row of large spikes starting at the end of its neck and spreading towards its tail and pointy spikes at the back of its elbows.

This titan is slender than the above beasts, so maybe it is a younger Godzilla. What do you think? 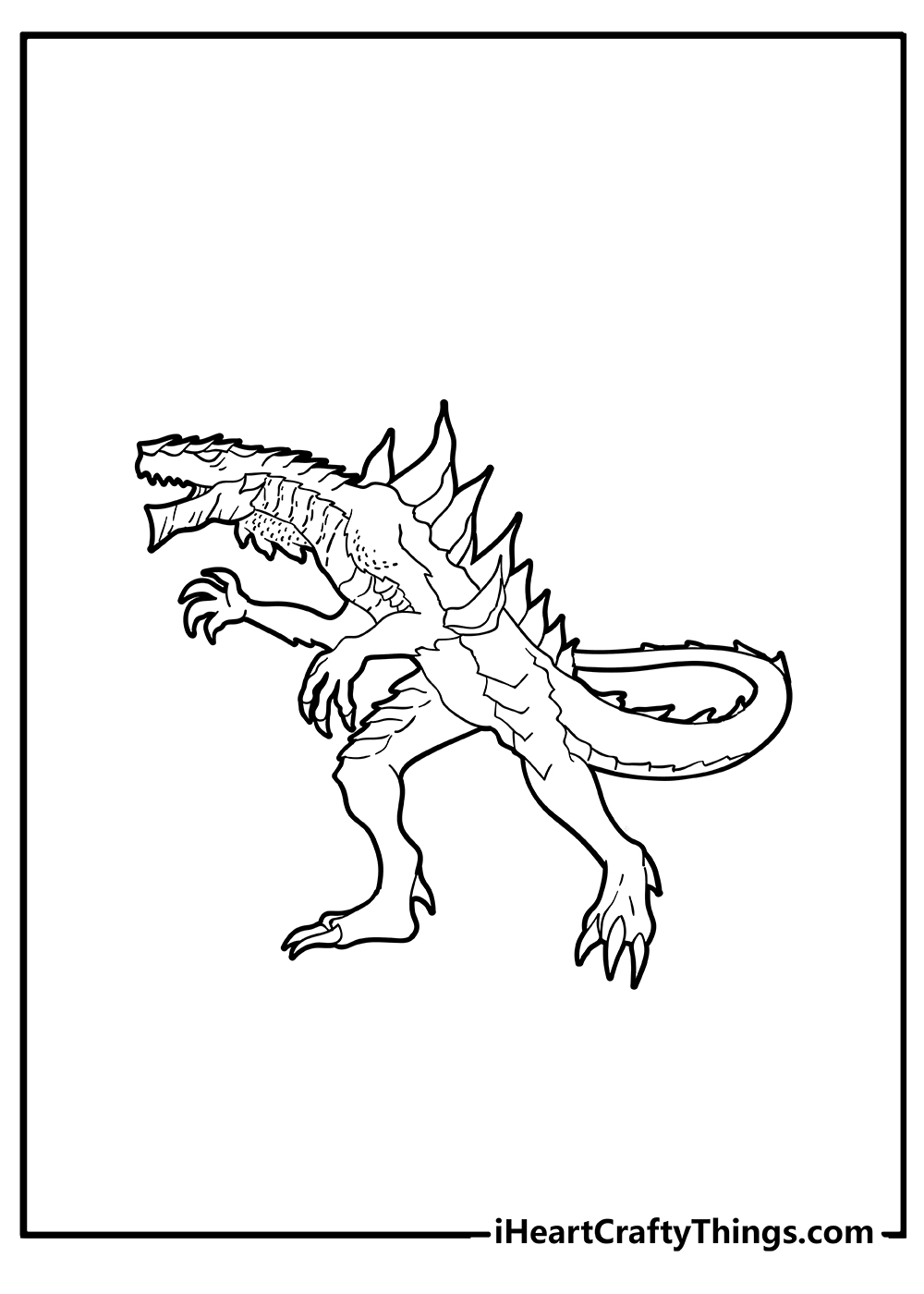 How big is Godzilla? Its height fluctuated over the years depending on the studios that created the movies.

The monster from the 2014 movie is the biggest yet; its size was increased to 120 meters (394 feet) tall because its origin story states that it is taller than skyscrapers.

Godzilla isn’t a titan to mess with due to its extraordinary superpower of breathing atomic fire.

The monster can also use its colossal body to cause harm because it has an elongated tail, sharp spikes that run from its head to the end of its tail, and very sharp teeth.

The monster on this Godzilla page looks exactly how the comics describe it.

Keep in mind that we are regularly updating our catalog of Godzilla coloring printable sheets, so if you want to paint more monsters, come around.

There will definitely be more printables to download and print for free. 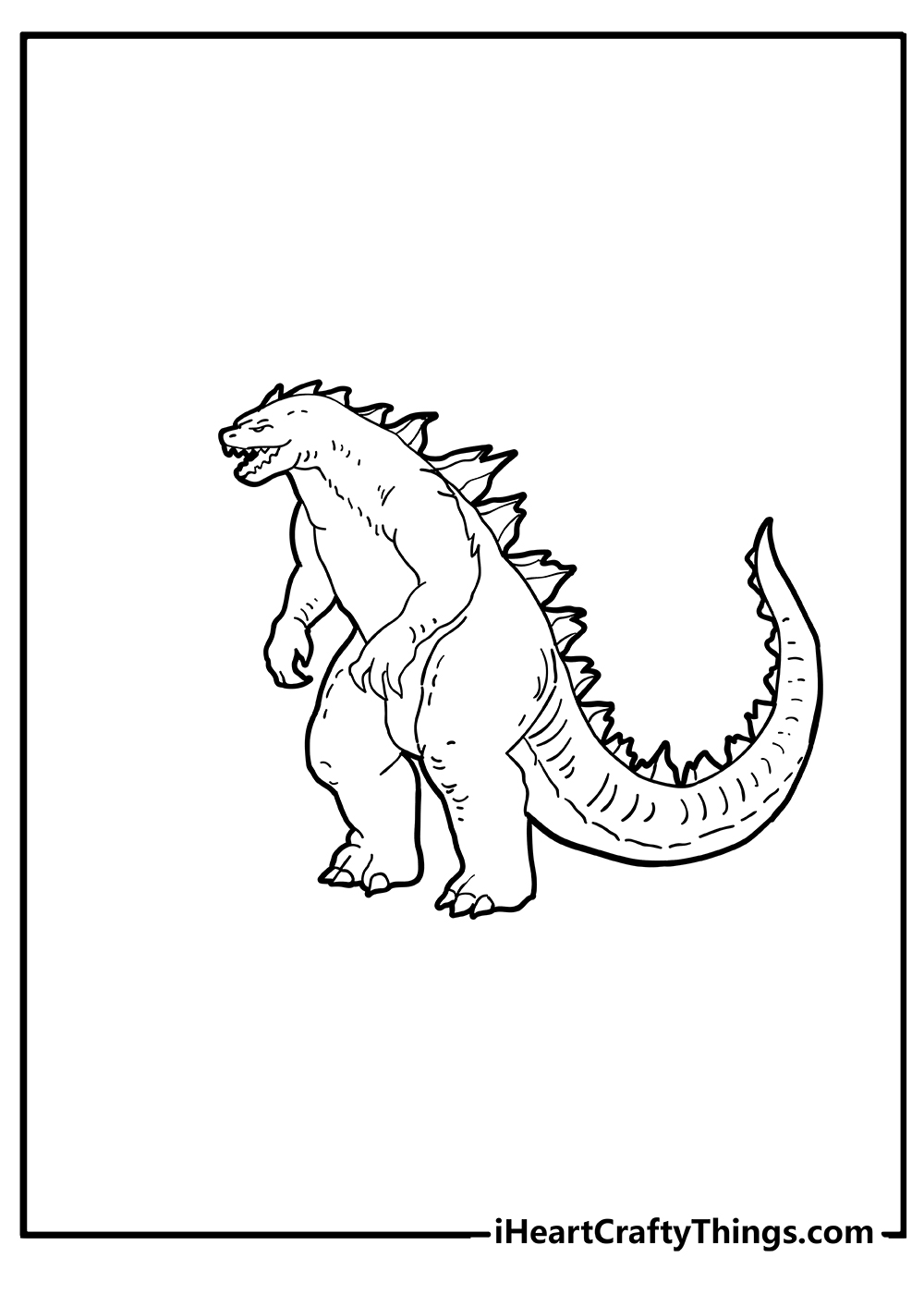 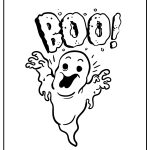 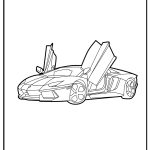