Spongebob Squarepants is one of the most popular animated shows of all time! Since 1999, Spongebob and his friends have entertained through shows, films, video games and more!

It’s filled with many bright and cheerful characters, making his neighbor Squidward stand out with his grumpiness and cynicism.

Despite this, he is an immensely popular character, and many fans like to learn how to draw Squidward to show this love for him.

If you love this grumpy character as well, then you will love this guide!

Our step by step guide on how to draw Squidward in 10 steps will have you recreating this beloved character before you know it. 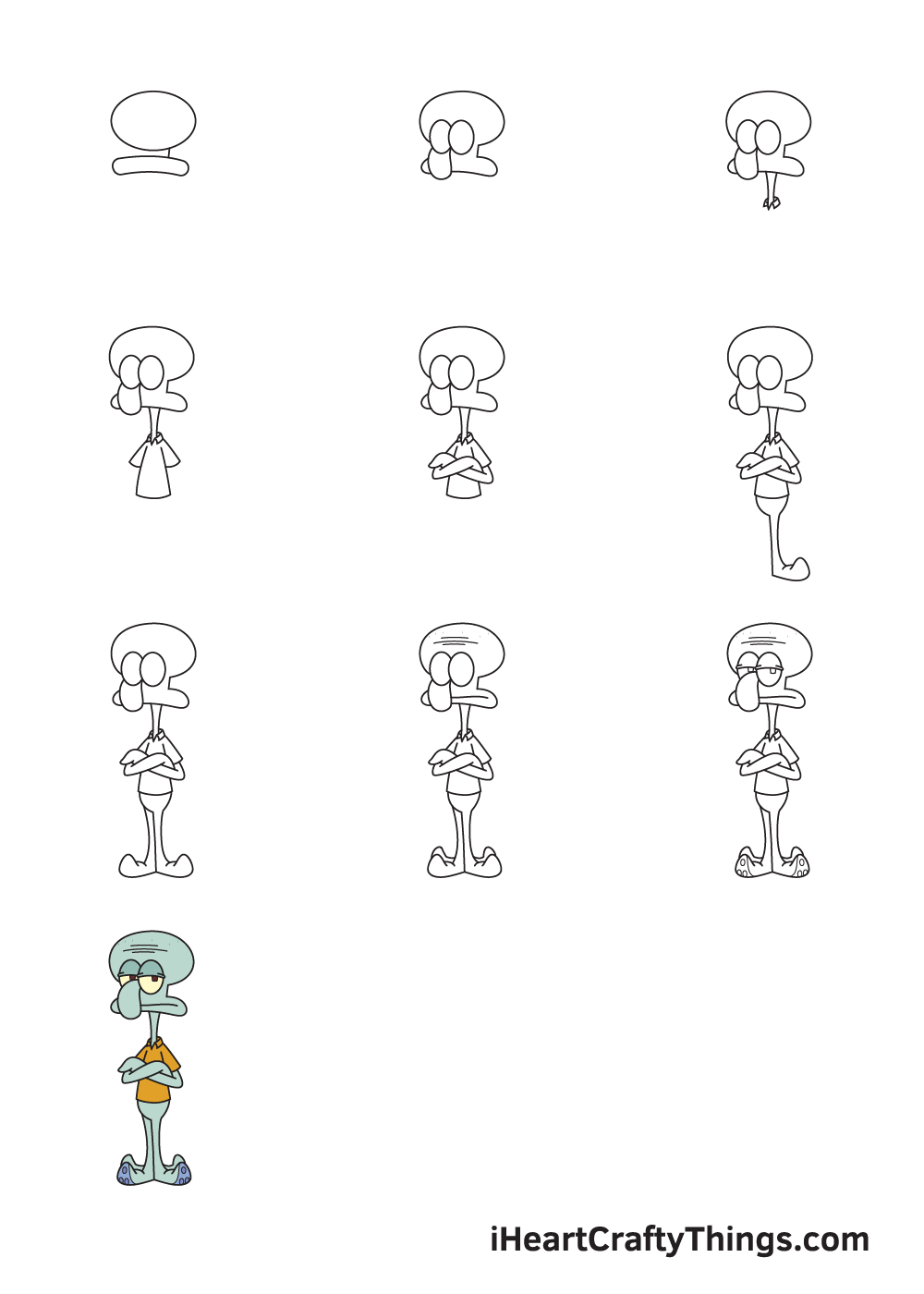 How to Draw Squidward – Let’s get Started!

For the first few steps of this guide on how to draw Squidward, we will be using a pencil before going over with a pen later.

This will make it easier to plan everything out when we add more details! Using your pen, draw a fairly flat oval shape for the main shape of his head.

Then draw a sort line coming down from it with a flat shape below that and attached to that line. Then you’re ready for step 2!

Step 2 – Draw his eyes and nose

Continuing on with your Squidward drawing, we will be drawing his eyes and nose now. For his eyes, simply draw two oval shapes connecting to one another.

Then use a curved line dropping down from it for his nose flopping there.

Step 3 – Next, draw his neck and collar

Squidward has a long, thin neck, and that is what we will draw for this step of our guide on how to draw Squidward.

Draw two slightly curved lines coming down from the bottom of his head, and then you can draw his little shirt collar at the base of it.

Using your pencil, you can now add a shirt for your Squidward drawing. Simply draw some diagonal lines for the shirt sleeves and then add the body of his shirt beneath them.

We are still using a pencil for now, because we will be drawing his crossed arms over his shirt later.

Step 5 – Next you can draw his crossed arms

Now that you have his shirt, we can now draw his crossed tentacle arms in this step of our guide on how to draw Squidward.

We will be drawing his arms using some curved and rounded lines, so be sure to use the reference image closely as you draw!

Step 6 – Next you can draw his first tentacle leg

Squidward has four tentacle legs, and we will draw the first one for your Squidward drawing now.

Use some curved lines for the bottom of his body coming down from beneath his shirt. Then draw some long lines for his leg, and then you can add his tentacle foot at the end curling upwards.

You’ll then be ready to add some more legs in the next step!

Now that you have the first leg drawn, you can add another one in this step of our guide on how to draw Squidward.

This leg will go opposite to the first one that you drew and will appear almost as a mirror image of the first one. Then once that is drawn then we can start to add the final details in the next steps!

Step 8 – Add some facial details and the final feet

The next two steps of this Squidward drawing will be focused on finishing off the final details. Start by drawing some more curved lines for two more feet attached to the first two that you drew.

Then you will be drawing a line for his mouth beneath his nose, and you can also add some lines to his forehead to show he’s always frowning!

Step 9 – Add in the final details for Squidward

This step of our guide on how to draw Squidward will see you finishing off the final details and elements.

In this part, you can also start using your pen. First, erase the bottom of the eye on the left and draw his nose poking off that area.

Then you can draw his eyelids halfway down his eyes along with his square pupils.

Finally, finish off by drawing the round suctions underneath his feet. Once you are happy with how it all looks, you can then take your pen and go over all of your pencil lines to finish him off completely.

Then it’s time for the final step!

For this final step of your Squidward drawing, we will finish him off with some colors. In our reference image, we showed you what his typical coloring from the show should look like.

You could also change up the colors to create a more unique look for him instead! Don’t forget to also color in any background or extra elements that you may have added.

Head under the sea for drawing fun as we make your Squidward sketch even greater!

In the Spongebob Squarepants series, Squidward is associated with a few different objects and accessories. You could add some of these objects to make your Squidward drawing even better!

There are a few examples that you could take from the show. For a few of these, he could be posed with his trusty clarinet or maybe be wearing his Krusty Krab hat.

These are just a few examples, but what other accessories could you add? You could even design some of your own that aren’t from the show!

Squidward is one of many famous and iconic characters from the series, and you could add some of these characters here. That would be a great way to make your drawing of Squidward even greater!

For a few examples, you could have Spongebob, Patrick or Mr Krabs. This is just a small selection of characters you could use, but we’re sure you can think of many more!

Who else would you like to feature in this image?

We showed Squidward in his usual brown shirt in this image, but he has worn many other looks throughout the series.

You could personalize this Squidward sketch a bit more by drawing him in one of these outfits!

This is another example of where you could use inspiration from the show or make your own looks. You could also change his pose and facial expression to make it even more unique.

Finally, you should definitely try and have fun with the colors you use for this Squidward drawing! We tried to use colors and tones that closely matched the look of the show.

If you want a similar look, you could use mediums such as colored pens or markers. Certain types of paints would also work well to replicate the look of the show.

You don’t have to stick to the colors of the show, however! If you want to give Squidward a unique color look, then you should definitely do so.

Your Squidward Drawing is Complete!

Hopefully you had a really fun time diving under the sea to enjoy this guide on how to draw Squidward!

Drawing cartoon characters can sometimes be harder than expected, so we hope that this guide showed you how fun and easy it can be when you know what to do!

Breaking a drawing down into smaller steps and taking it slowly is always the best way to accomplish a new drawing like this.

Now you can take it even further by adding your own ideas and elements. We went over a few ideas such as drawing a background or adding more characters from the show, but what else can you think of to finish it off?

Be sure to swim on over to our website, as we have plenty of amazing guides there for you to enjoy. You’ll want to visit often, as we update the list of guides often. 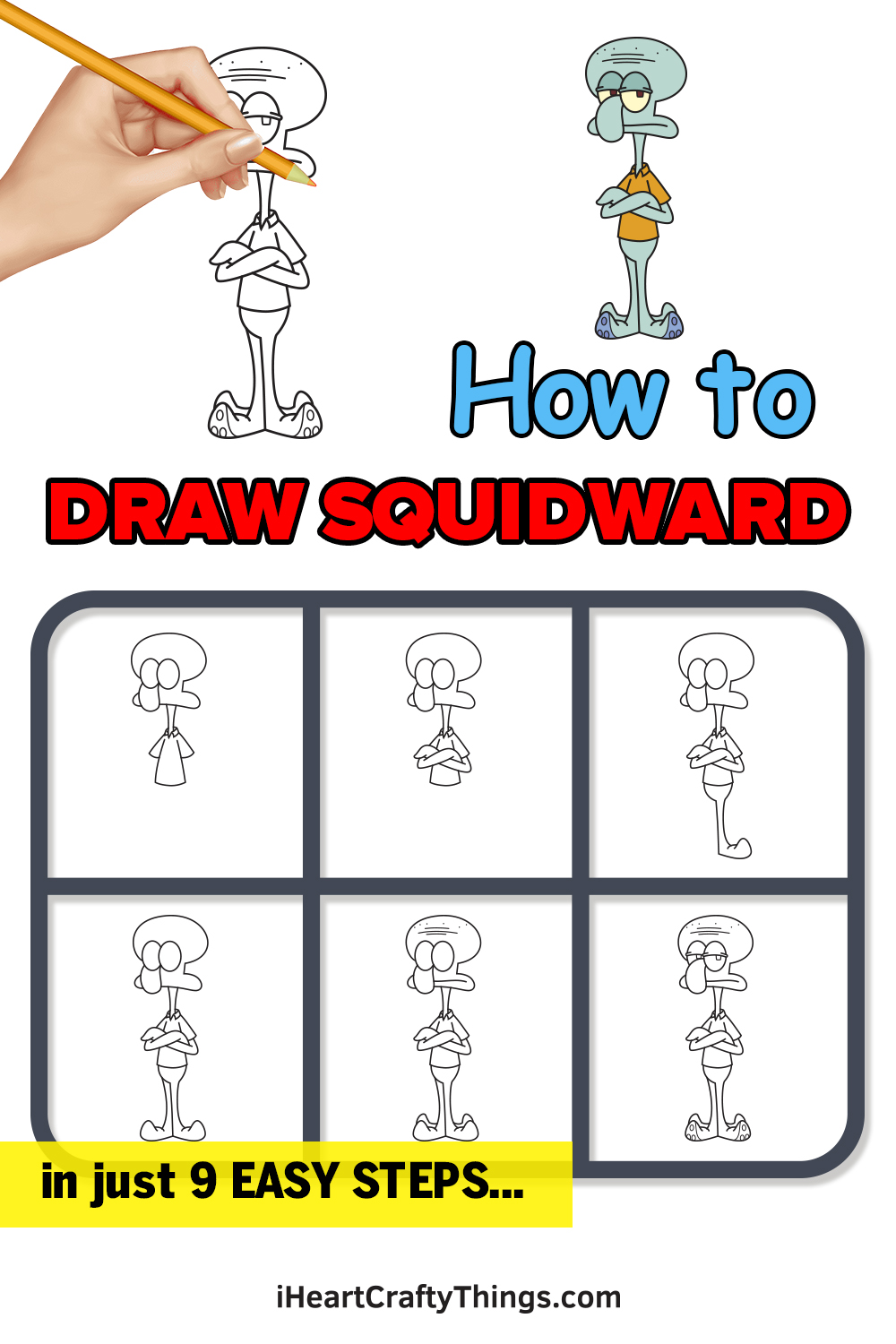 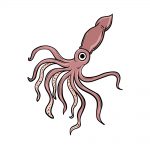