There are many famous cartoons in animation history that have captivated all ages around the world.

The Spongebob Squarepants series is a more recent example of a cartoon that is beloved worldwide.

It has won over tons of fans with its quirky humor, imaginative storytelling and unique characters.

With so many fans, it’s understandable that many of them like to create fan art for their favorite show.

These fans may like to learn how to draw Spongebob characters to represent their love of the series!

For those fans, this will be a tutorial that’s not to be missed. By the end of this guide, you will be able to draw 4 classic Spongebob characters.

Our step-by-step guide on how to draw Spongebob characters will show you how you can easily represent these famous characters. 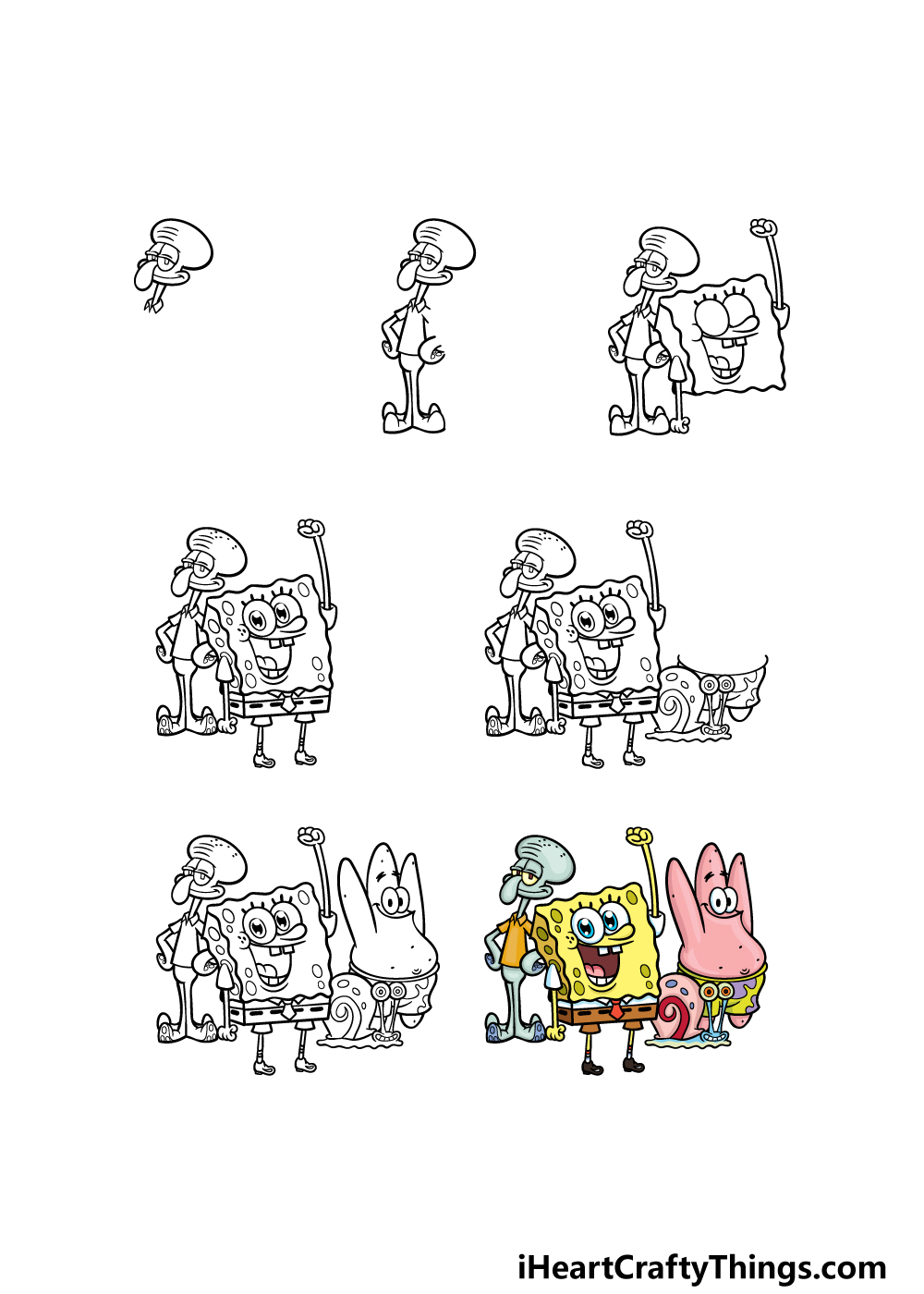 How to Draw Spongebob characters – Let’s get Started! 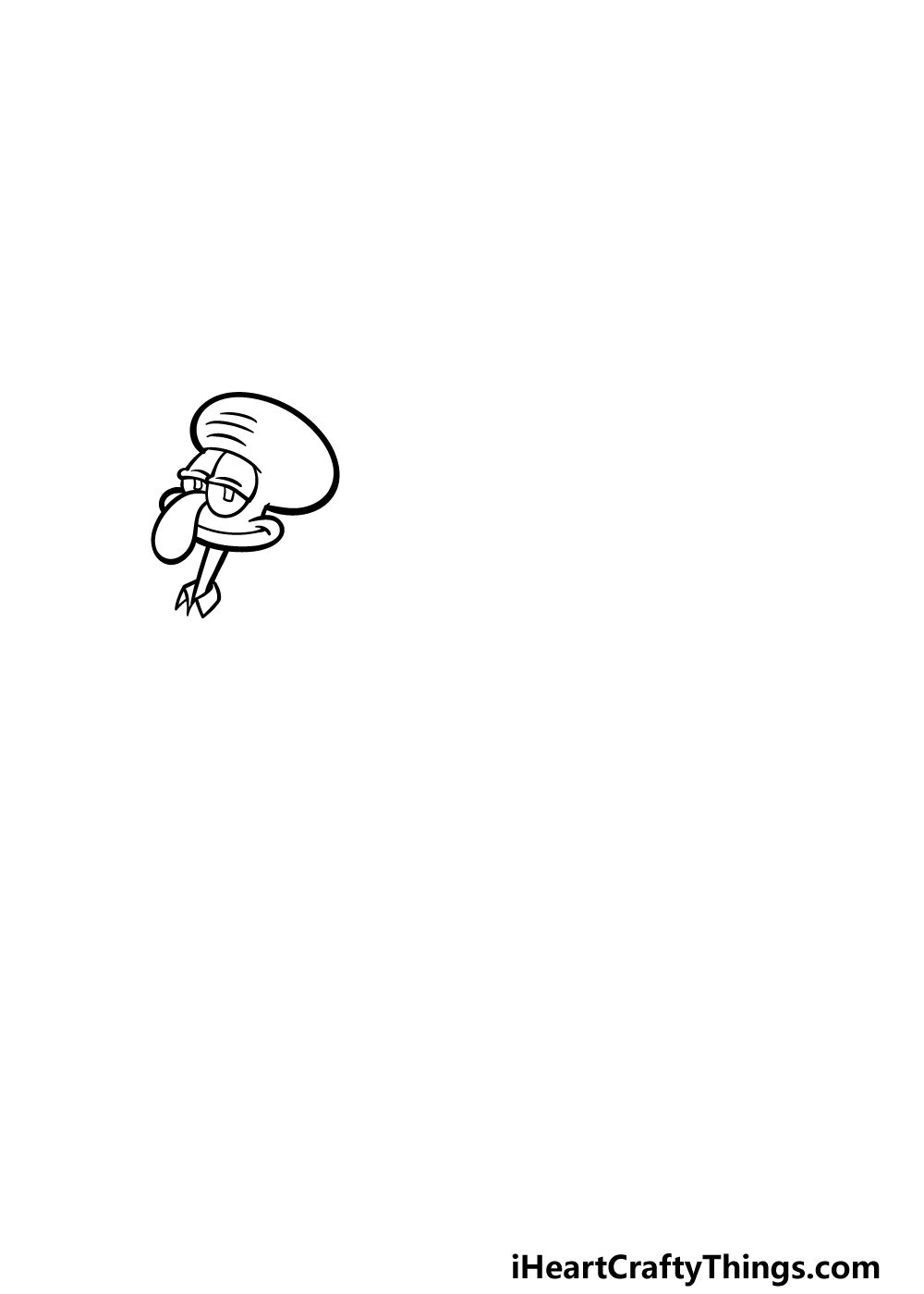 As we mentioned at the start of this guide on how to draw Spongebob characters, we will be depicting 4 characters from the show.

The first of these characters that we will be drawing is the surly Squidward. The top of his head is very rounded and drawn with a smooth line.

Then, draw two oval shapes for his eyes, and then have his eyelids half down. He then has a large rounded nose coming down from his eyes.

Squidward is a famously grumpy character, but we will give him a smile in this particular image.

Once the head is drawn, we shall continue to the second step to draw more of Squidward. 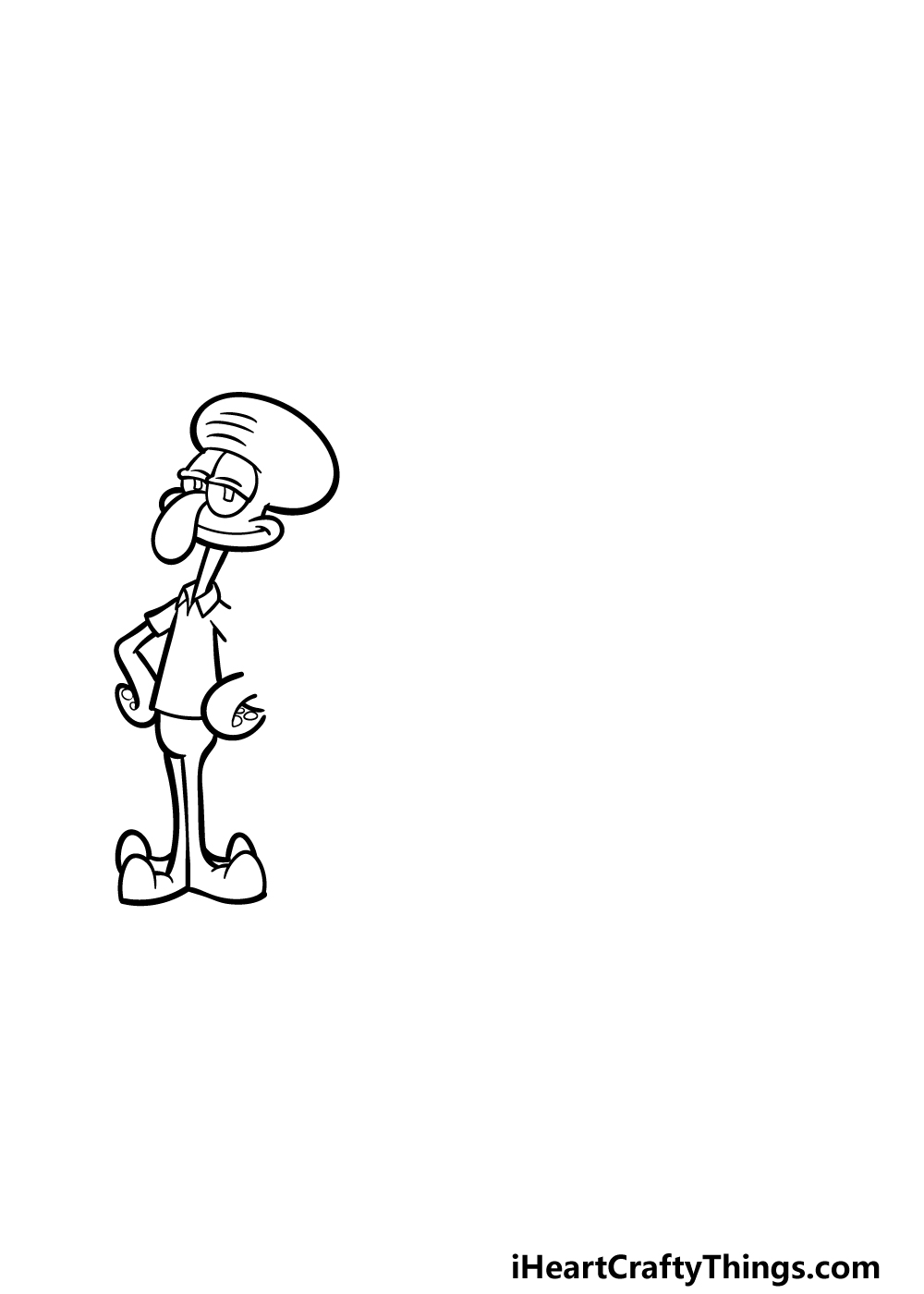 You’ve finished the head of Squidward for this Spongebob characters drawing, and in this next step we will be drawing the rest of his body.

Use some simple curved lines to draw his t-shirt with his hands at his waist.

As you can see in our reference image, the arm on the right will have an open space on it as another character will be standing in front of it.

Finally, draw his four squid legs, and then we can move on to the third step of the guide. 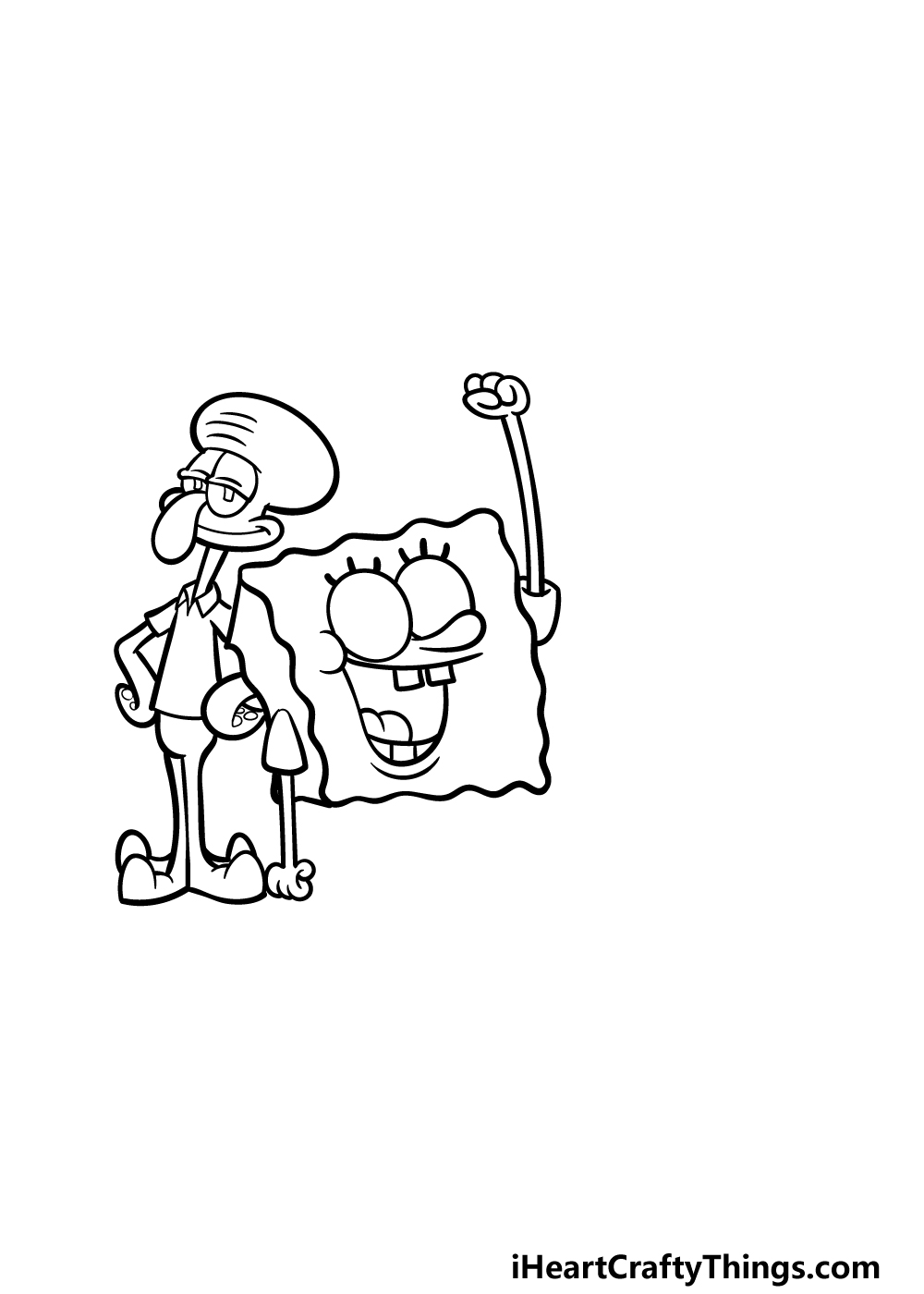 We’re finished with Squidward for now, and in this step of our guide on how to draw Spongebob characters we shall focus on the man himself: Spongebob Squarepants.

He has some oval eyes that have his long, thin and rounded nose poking from them. Then, we shall use some curved lines for his smiling mouth, and you can also draw his square teeth poking down.

Finish off the bottom outline of his open mouth, and then we shall draw his body.

His body will be drawn using a wavy line to make it look like he is made of a spongy substance. Finish off by drawing his arm hanging down on the left while his other one is raised in triumph. 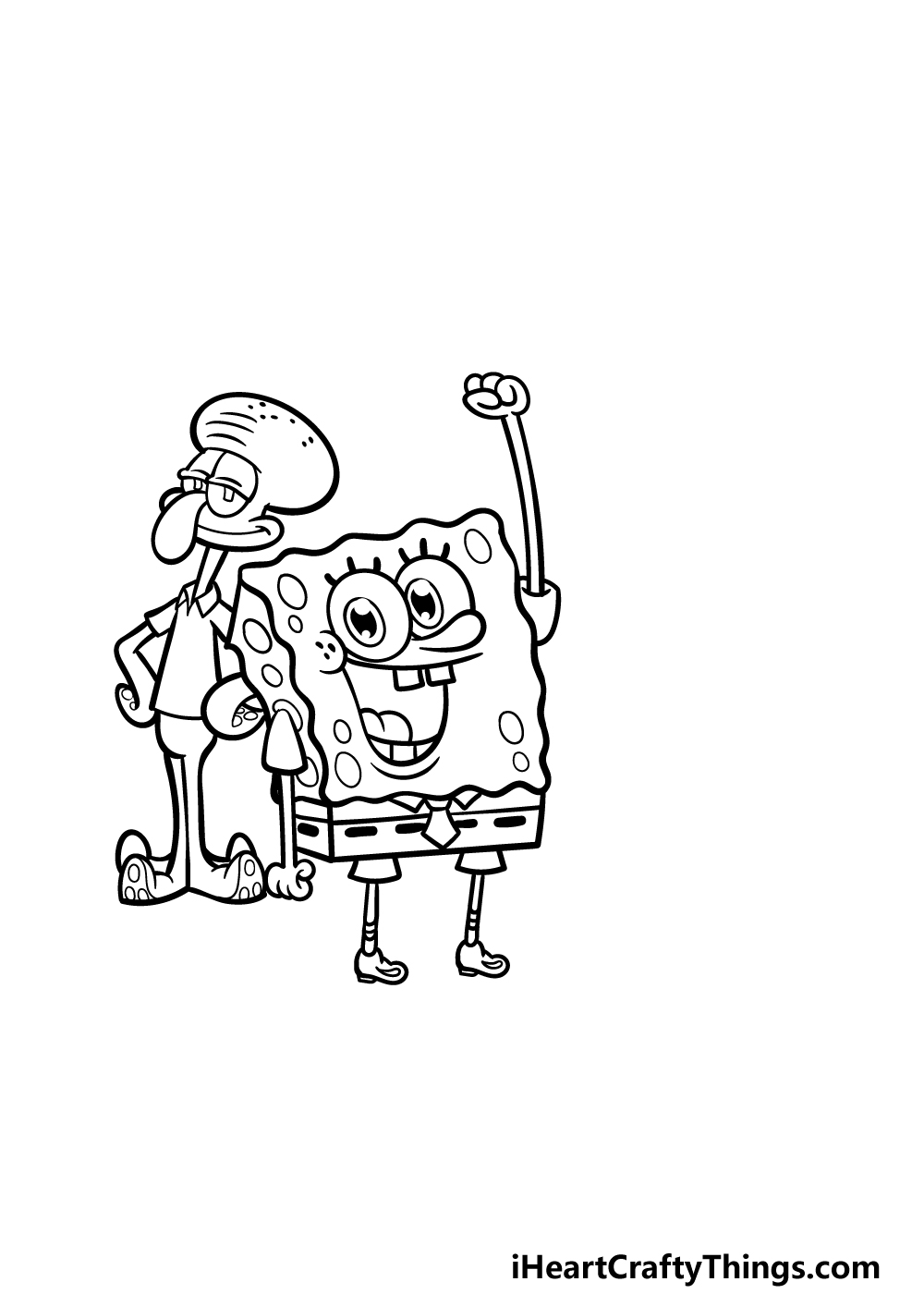 Continuing with this Spongebob characters drawing, we will finish drawing Spongebob while adding some more details for Squidward.

First, use some straight lines for the outlines of his pants, and then add the collar of his shirt with his belt details.

Finish off this step by drawing some thin legs for Spongebob, and then draw some circles to the base of Squidward’s feet before we proceed to step 5. 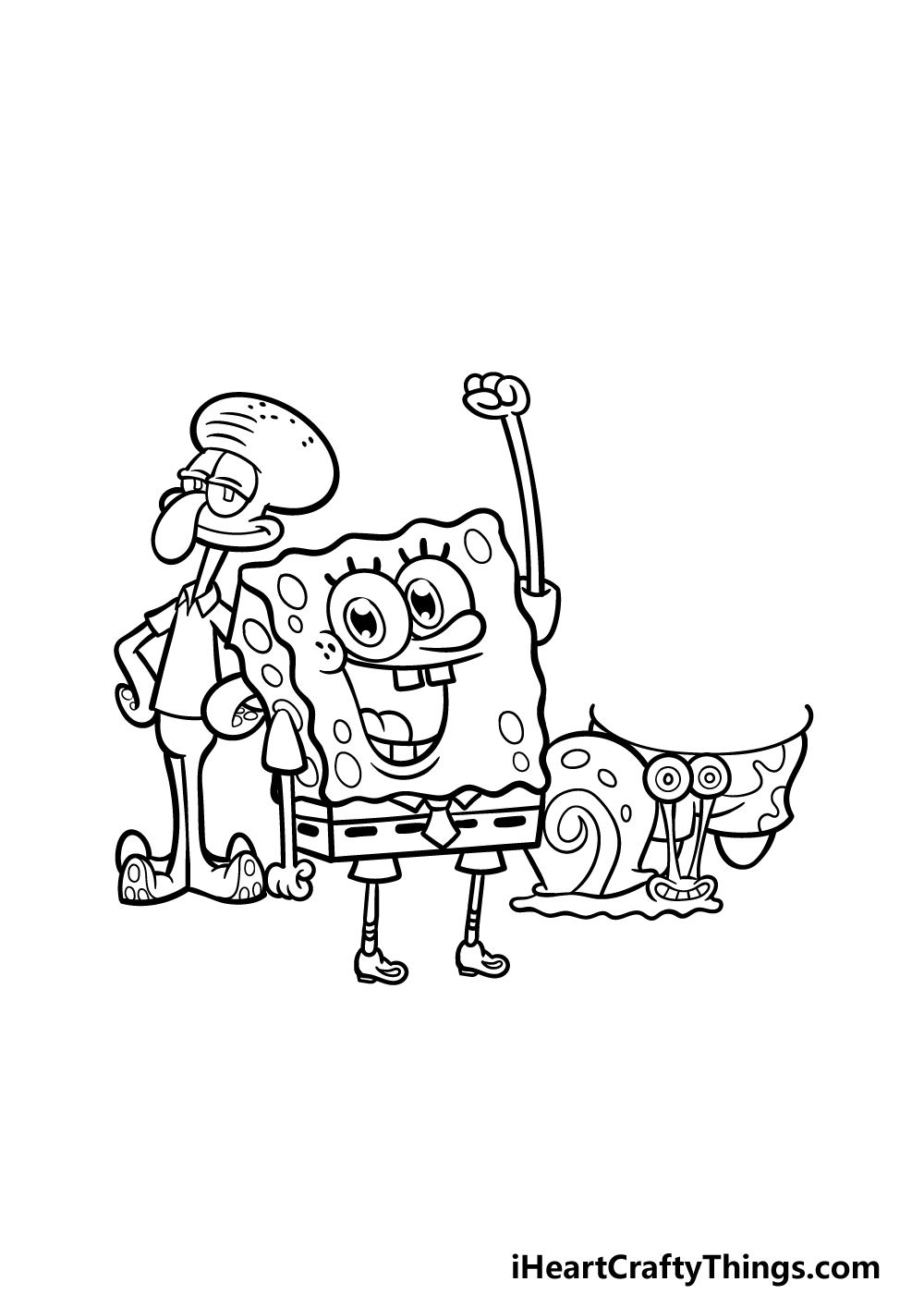 You can use two circles for his eyes, and then draw some thin stalks coming down from them.

Then, use some large rounded lines for his shell and add a twisty pattern to them. You can then finish Gary by drawing a wavy line for the base of his body.

Finally, you can draw the swimming trunks that starfish Patrick wears, and then draw the iconic flower pattern onto them.

We will then be able to finish Patrick along with any other final details in the next step of the guide. 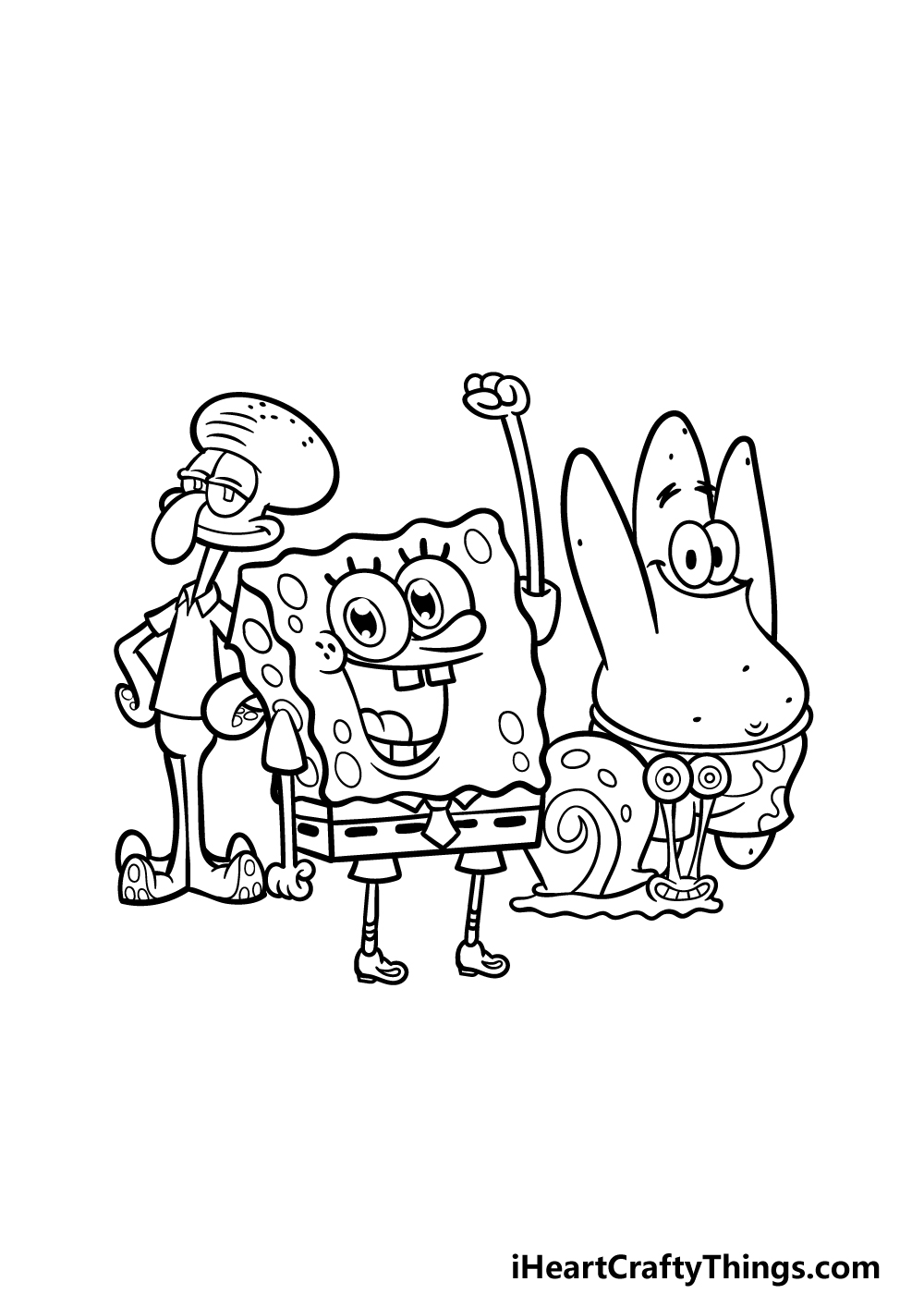 This part of your Spongebob characters drawing will see you finishing the outlines and details for Spongebob’s best friend, Patrick.

First, use some more oval shapes for his eyes. Then, use some curved lines to draw his pointy head, and then draw his equally pointy arms poking up.

You could draw a background incorporating one of the famous locations from the show or maybe even add some more characters. What kinds of extra details and additions can you think to add?

Step 7 – Finish off your Spongebob characters drawing with some color 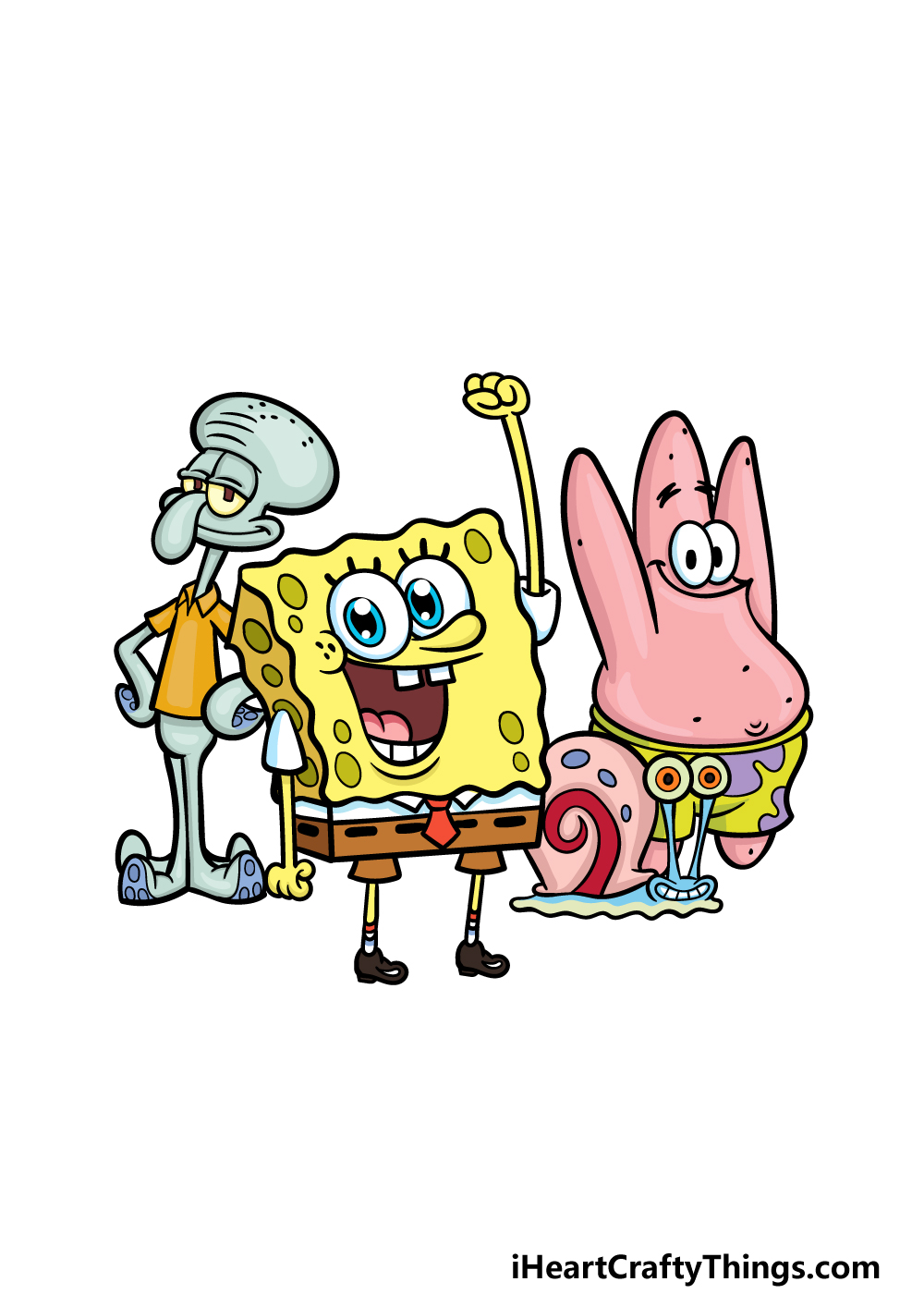 Now you’re ready to finish up this picture with some color in this final step of our guide on how to draw Spongebob characters!

In our example image, we went with the usual colors that characters are seen in. Squidward has blue skin with a brown shirt, while Spongebob is bright yellow with brown pants and a red tie.

Finally, Gary is blue with a pink and red shell, while Patrick is pink with green pants that have purple flowers on them.

When coloring your own image, do you think you will go with these classic colors, or will you create a unique appearance for these characters?

Take a trip under the sea with these fun ideas for your Spongebob characters drawing!

One of the easiest ways you can take this Spongebob characters sketch to the next level would be by adding a background.

Luckily, there are so many iconic locations from the show, so you would be spoiled for choice when it comes to backgrounds!

You could use Spongebob’s pineapple home or maybe the Krusty Krab for just a few examples.

There are many others you could choose from, and you can use the show itself to help you as you draw!

We have four characters featured in this drawing of Spongebob characters, but they are just a small selection of characters from the show. There are many more characters you could add to stand beside them!

There are characters like Mr. Krabs, the evil Plankton or maybe even Davy Jones. Much like with the locations, you certainly have plenty of iconic characters to choose from.

Who are the characters you think are missing from this crowd?

If you’re feeling confident about creating this Spongebob characters drawing, you could make it even better by changing some of the details!

These could be drastic, such as changing the poses of the characters or even moving them around. Or, they could be smaller details such as their facial expressions.

You could also add some accessories, with some examples being Spongebob’s trusty jellyfish net or his spatula. These are just a few of the many ideas you could go for when finishing off this scene!

The Spongebob Squarepants series isn’t just well known for its many iconic characters and settings, but also the distinctive color schemes of each character.

That means that if you stick to the established colors, you will have a really bright and vibrant drawing to show off!

Even so, you can also experiment with different art tools and mediums to make the colors look even more interesting.

If you have lots of art tools around, maybe you could color each character with a unique medium!

Your Spongebob Characters Drawing is Complete!

That brings you to the end of this guide on how to draw Spongebob characters!

We hope that the steps in this guide showed you that drawing all of these classic characters can be so fun and easy to do!

Now you can take it even further with your own awesome details, extra elements or color choices.

When you’re ready for more, you can then find some more drawing guides to enjoy on our website! We have a huge selection with more on the way, so keep checking in to never miss out.

You can also show off your amazing Spongebob characters drawing by sharing your creation on our Facebook and Pinterest pages. 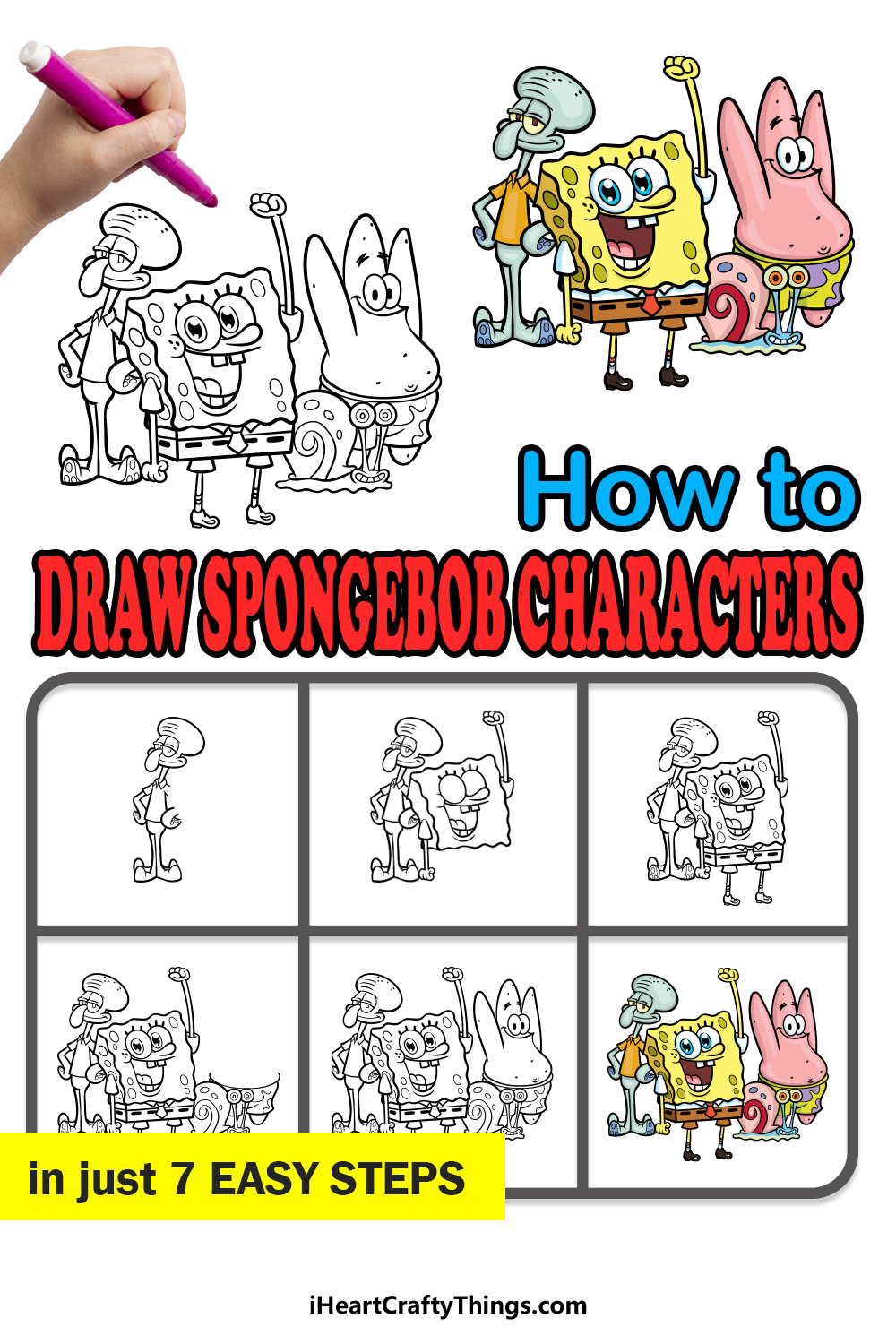 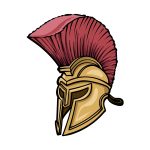 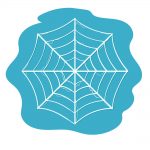