Search
Follow us
Menu
Follow us
When we were visiting family last weekend I opened up an old Magazine on my Mother-in-law’s table and saw the cutest idea for a candy corn inspired quesadilla. I didn’t even catch the name of the Magazine or read the directions, I was just skimming through and saw a picture of it and fell in love. I decided to make my version of them for the kids today for lunch and I think they turned out cute! 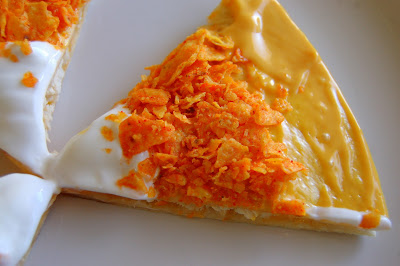 1. First,  simply make a quesadilla using 2 tortillas. Basically, don’t fold 1 tortilla in half to make the quesadilla, but make one huge quesadilla with 2 tortillas. We added diced chicken to ours which was left over from dinner last night. I thought it would have been fun to add some salsa and black beans to the chicken mixture but I didn’t think about it until after we were done (darn!).

2. When your quesadilla is all finished cooking, put it on a plate to decorate it into a candy corn. I started by spreading a thin layer of cheese dip all over the quesadilla. This is the kind I used and I heated it up in the microwave before spreading it on. 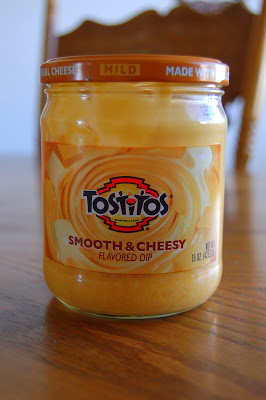 3. Next place a dollop of sour cream in a sandwich bag, close the bag releasing all the air first, and then make a cut in one of the bottom corners so you can pipe out your sour cream onto your quessadilla. Squeeze out the sour cream forming a circle in the center of the quesadilla and fill it in entirely.

4. Place a handful of Doritos in a sandwich bag and have your kids enjoy crunching them up. Then very carefully add a circle of Doritos around the sour cream. The cheese dip makes the Doritos stay in place. This is what our quesadilla looked like before I cut it. 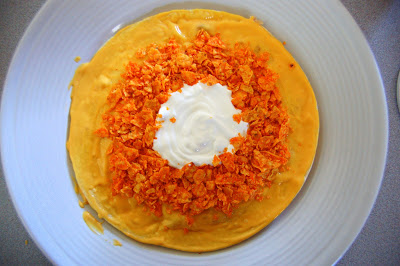 5. Now just cut your quesadilla into pieces. I cut mine in half, then cut each half into 3 sections. 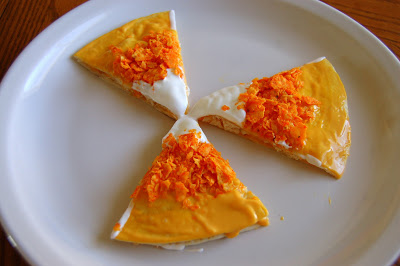 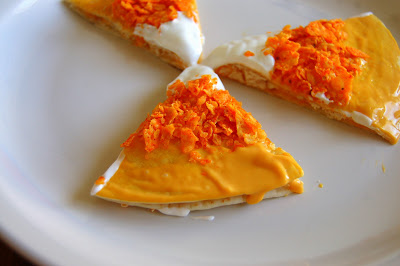 I didn’t tell the boys what I was making the entire time but they watched the whole process and kept trying to guess what on earth it was. They were excited once they saw it all cut up and gobbled it right up. I served mine with a side of fresh fruit. 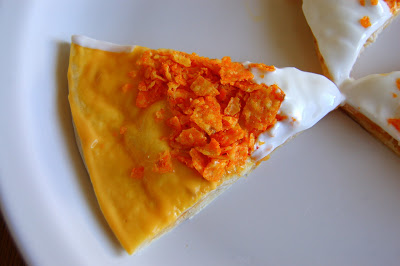 Linking up to THESE great parties! 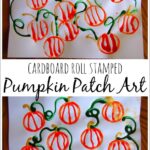 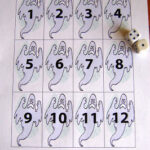