Dragon Ball Z has many cool and unique characters that bring different strong personalities and powers to the table.

Vegeta is one of the most interesting and popular characters in the series, as he presents a more complex personality that can pivot between heroic and villainous.

Like most characters from the series, he has a great visual design that can make it fun to learn how to draw Vegeta.

Fans of this character will get a real thrill from this guide, so be sure to keep reading!

Our step-by-step guide on how to draw Vegeta will show you how to recreate the superpowered Saiyan. 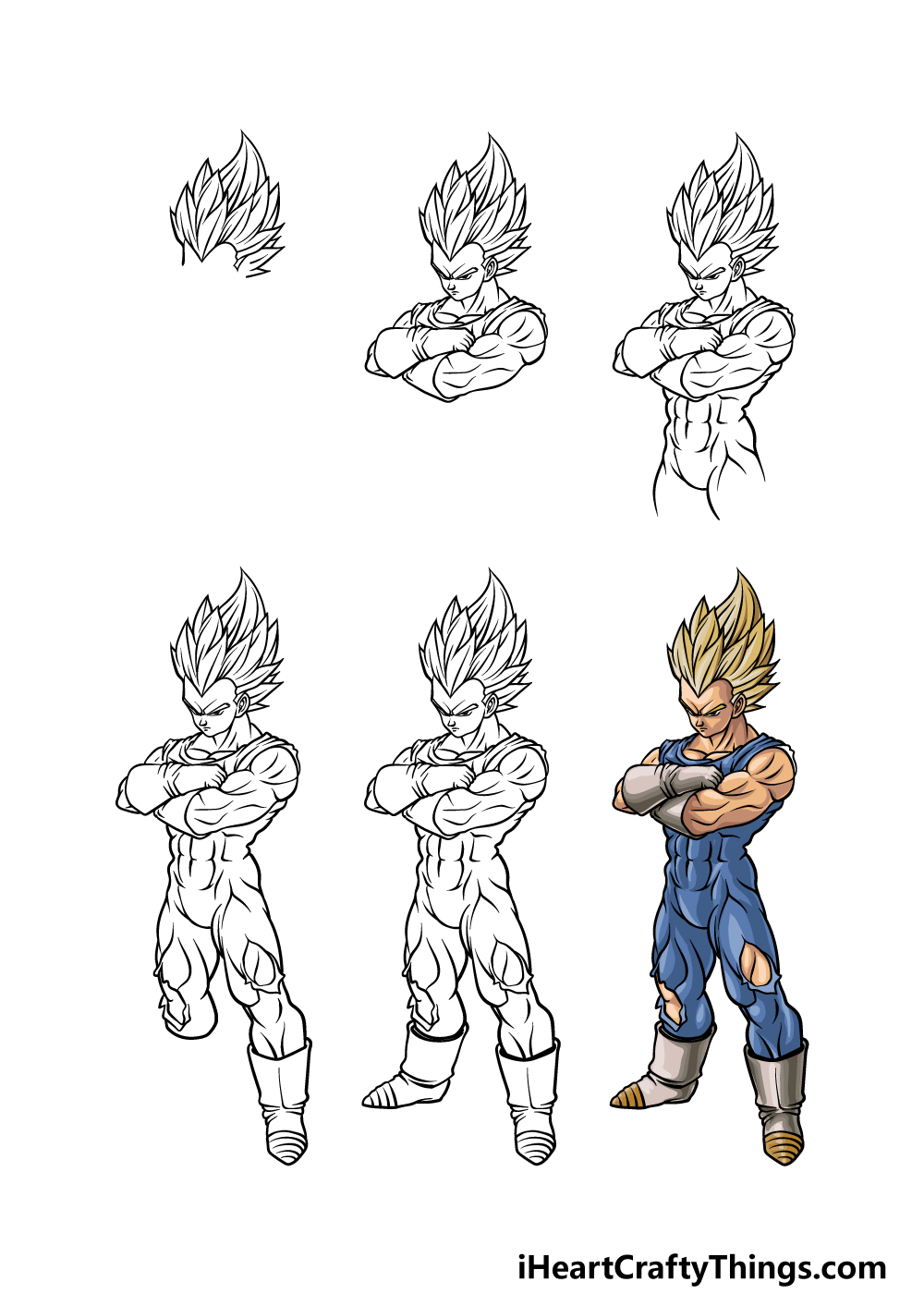 How to Draw Vegeta – Let’s Get Started! 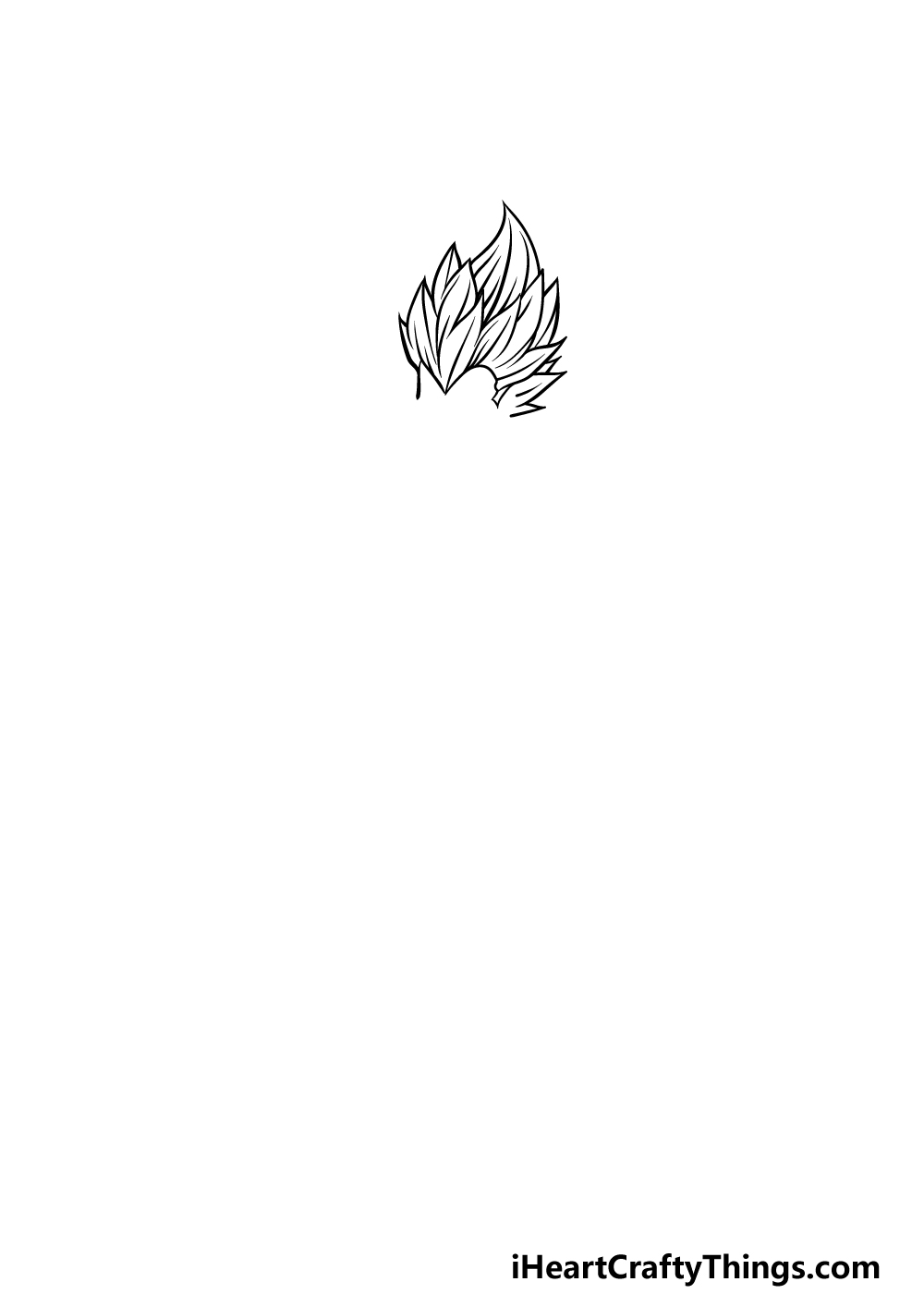 One of the most distinguishing features of Vegeta and other Saiyan characters from the series is his spiky hair.

This is the feature that we will start with in this first step of our guide on how to draw Vegeta! When drawing his hair, try to think of it as many large pointy shapes connecting to one another.

With this is mind, use some curved lines with sharp points at the ends to create the shapes connecting to one another.

Together, these shapes will form a roughly triangular shape as it gets thinner the closer it gets to the tip.

The part at his forehead will poke down with a sharp line to create a bit of a widow’s peak hairstyle.

Finally, finish off by adding some line details to each of the pointy shapes making up his hairstyle, and then it’s on to step 2.

Step 2 – Next, draw his face and arms in this step 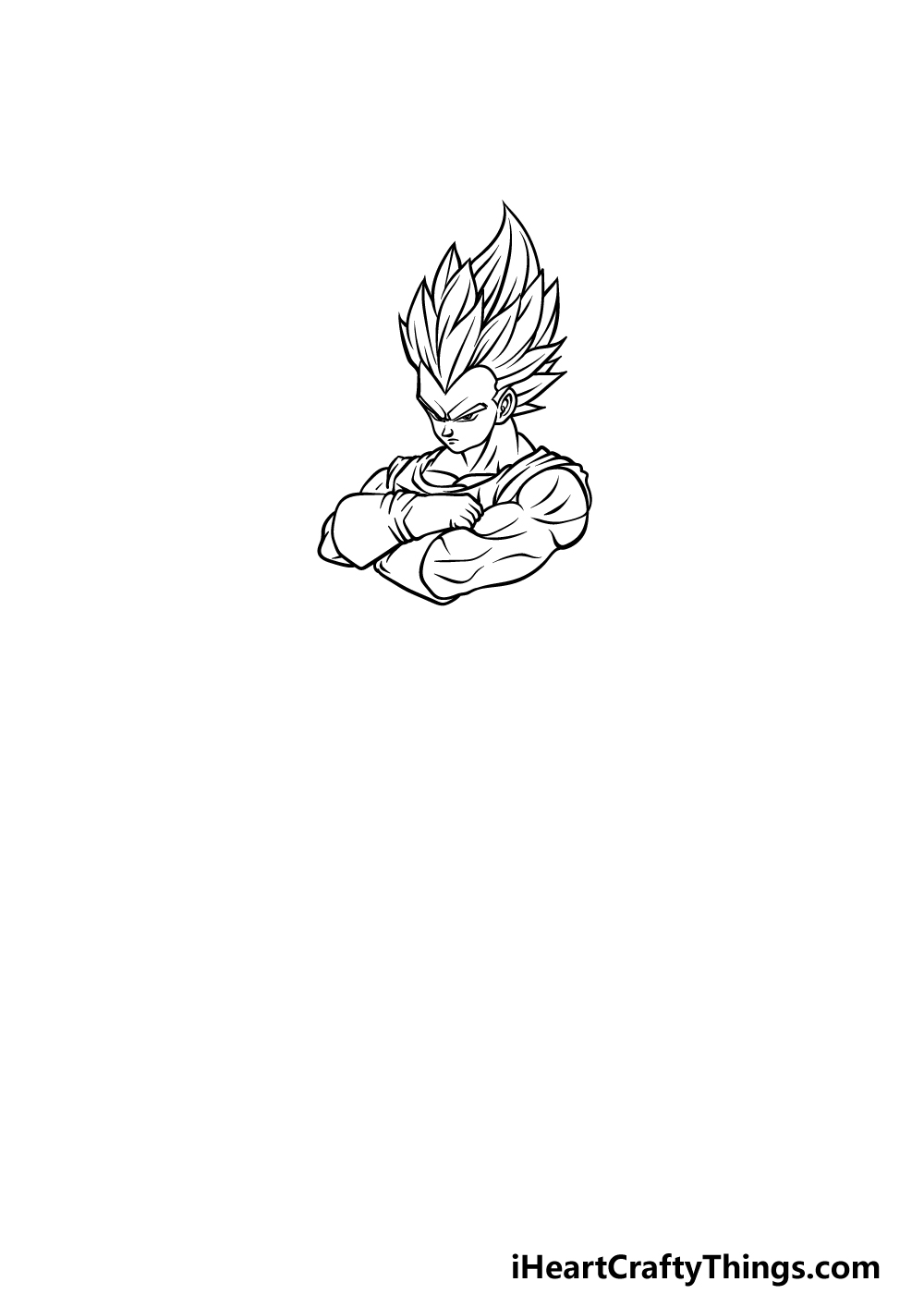 We will be drawing quite a few details in this part of your Vegeta drawing, so be sure to take it slowly and follow the reference image closely.

First, we will start with his face. Use some pointed rectangular shapes for his eyebrows angled to make him look serious and a bit angry!

His eyes will be fairly small and narrow, and then his nose and mouth can be drawn with some simple lines.

Then you can draw his facial outline and his ear, and once you have done that you can connect his head to his thick neck.

Drawing his arms may be a bit tricky, so try your best to copy the reference picture we have provided in order to get the proportions looking good.

There will be a lot of subtle line detail on his gloves, top and muscles.

Step 3 – Draw his waist and start his legs 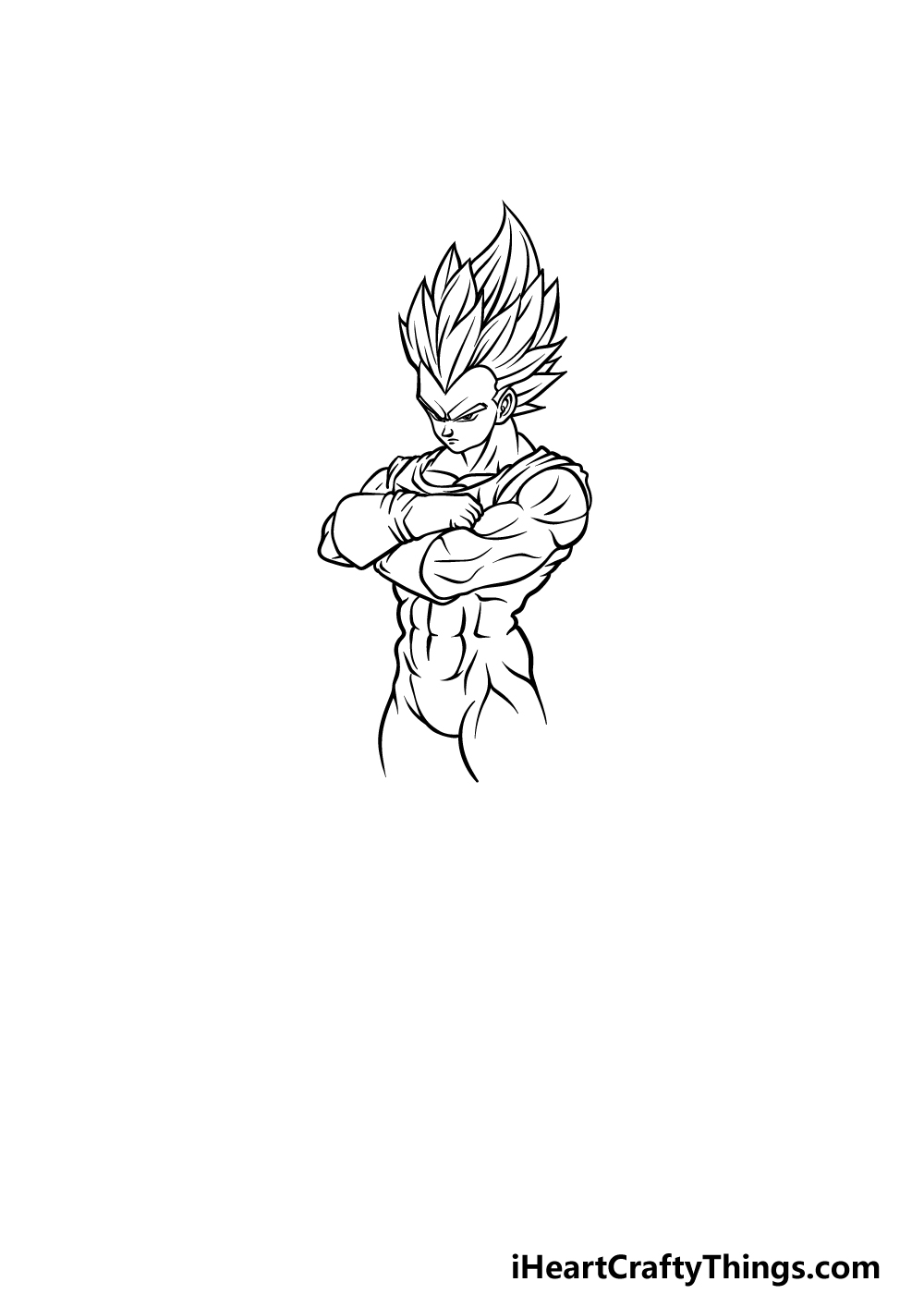 For this third part of our guide on how to draw Vegeta, we will be extending his body further down by drawing some of his waist.

Use some curved and bumpy lines for the outline of his waist, and try to draw some rounded shapes into this outline where they appear in the picture.

These will be to make him look more muscular. Finish off by drawing more muscle detail on his abdomen, and then complete this step with some curved lines for the tops of his legs.

Step 4 – Draw some more of his legs 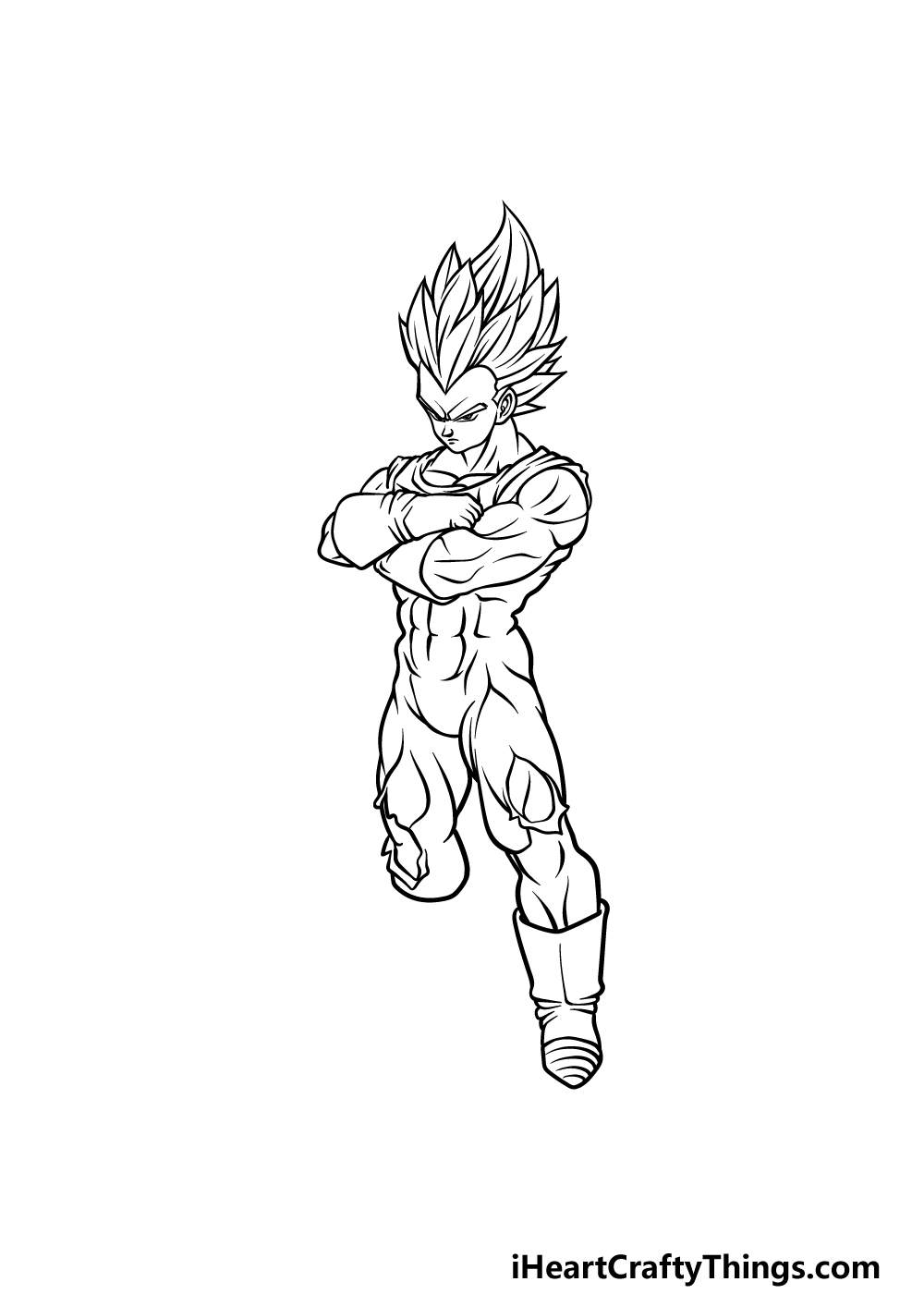 This fourth step of your Vegeta drawing will be based around finishing one of his legs while adding some details to the other.

His pants will be a bit torn to give him some battle damage detailing for a more dynamic image.

Use some more curved lines for the outlines of his leg on the right, once again, the reference image will guide you as you how to portray the proportions and musculature.

Finally, draw his boot which will be straight and wide at the top and small and rounded at the base. We will then finish off the other leg in the next step along with some final details!

Step 5 – Finish off your Vegeta drawing 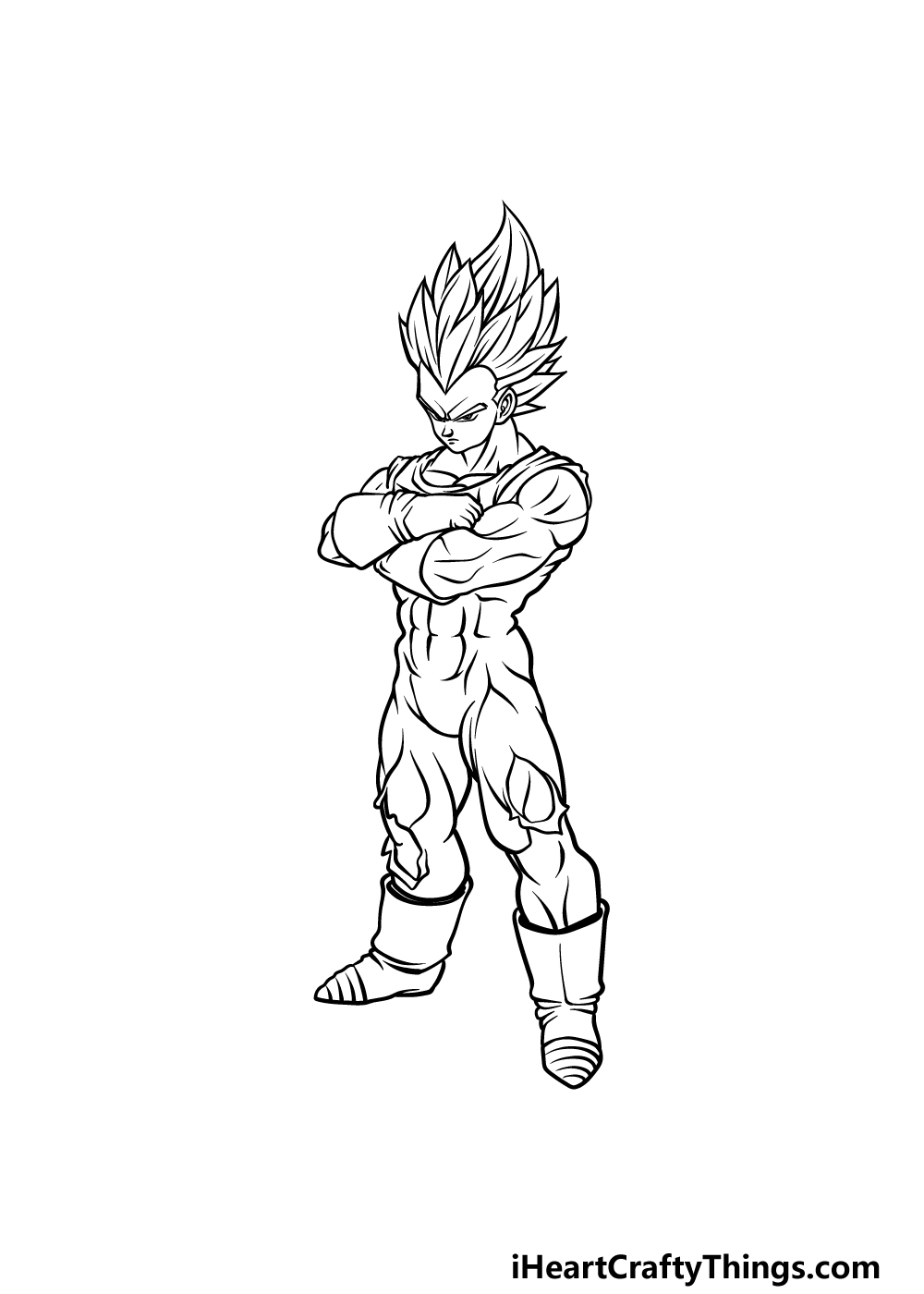 We will finish off the final elements and details in this step of our guide on how to draw Vegeta! The main thing to take care of will be drawing his other boot.

This one will look very similar to the previous one that you drew, but it will be at a bit of a different angle.

Once you have completed this other leg, your Vegeta drawing is complete and ready for coloring!

Before you move on, be sure to add any elements or details that you may want for it.

You could draw a background to represent your favorite Vegeta moment or appearance, and you could look up stills from the scene to replicate the style.

Another fun idea would be to look up some images of your favorite Dragonball characters to draw beside Vegeta.

These are some of our suggestions, but if you are going to add some elements to this picture what else can you think of?

Step 6 – Finish off your Vegeta drawing with some color 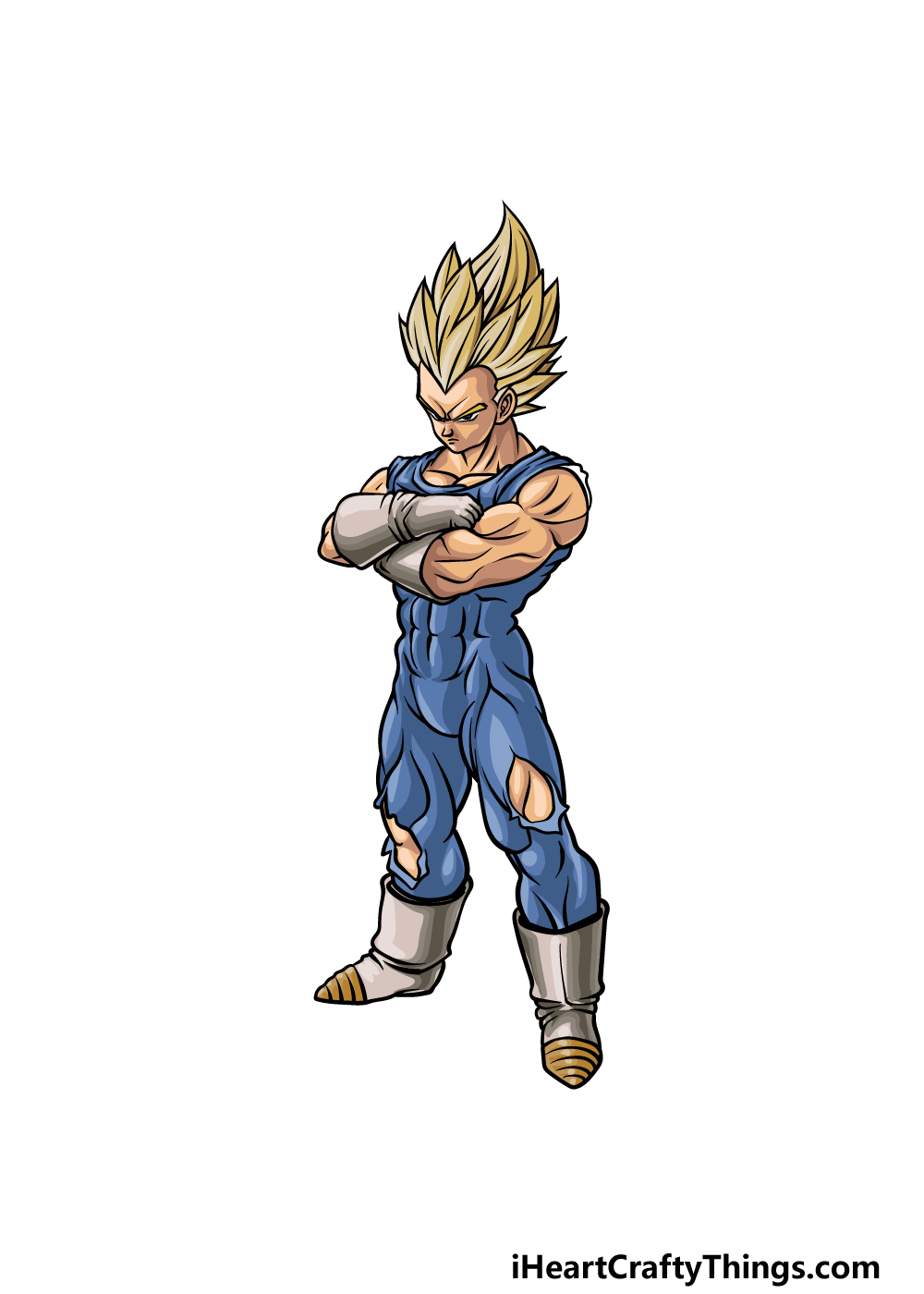 This step will be all about finishing up your Vegeta drawing with some amazing colors. In our reference image, we colored Vegeta in for a screen-accurate look.

His hair is black when he’s in his normal state, but when he powers up to become Super Saiyan it gets yellow and spiky.

It’s always a thrill for fans to see this Super Saiyan state, so that’s the appearance we went for in our reference picture.

For his clothing, we went for some blue along with greys and gold for his boots.

These colors will serve as a handy reference if you would like to replicate Vegeta in his series appearances, but feel free to use any colors and art mediums you would like.

We will be interested to see how you color in this drawing!

Here’s how you can make your Vegeta drawing even better…

Create some powerful drawings as we make this Vegeta sketch even greater!

In this Vegeta drawing, we show him in one of the many different appearances he has had. He seems to be shown just after battle, as his blue suit has some battle damage.

This is one outfit you could choose to show him in, but he has had many others throughout the years. By changing just a few details, you could give him an entirely new look!

Will you change his outfit or do you think you will leave him as he appears in our image?

There are other details that you can change on this drawing of Vegeta to change it significantly. For example, you will notice that his hair is golden to show that he is in his Super Saiyan form.

By changing the shape and color of his hair, you could make him look as if he is in his normal form.

That is one example of a different look you could give him, but there are other details you could add or change!

One of the most obvious additions would be Goku, but he is one of a huge variety of options. You can use the anime or some pictures online to help you if you wish to add some more characters.

Finally, when it comes to adding a background you have many options available to you for this Vegeta drawing. There are so many famous locations and places from the series that you could recreate here.

This is another case where you can use the anime itself to guide you as you draw your favorite locations. You definitely don’t need to stick to already existing locations though.

You could create some locations of your own design to take Vegeta on new and exciting adventures!

Your Vegeta Drawing is Complete!

By following all of the steps in this guide on how to draw Vegeta, you have landed up with an awesome picture of this classic character!

We hope that you enjoyed taking on this drawing challenge alongside us, and we also hope that this guide made it easier for you to do.

Now we will be looking forward to seeing what extra details, color choices and mediums you use to bring it to life!

There are many more fun drawing guides waiting for you on our website, so be sure to check in often to never miss out! 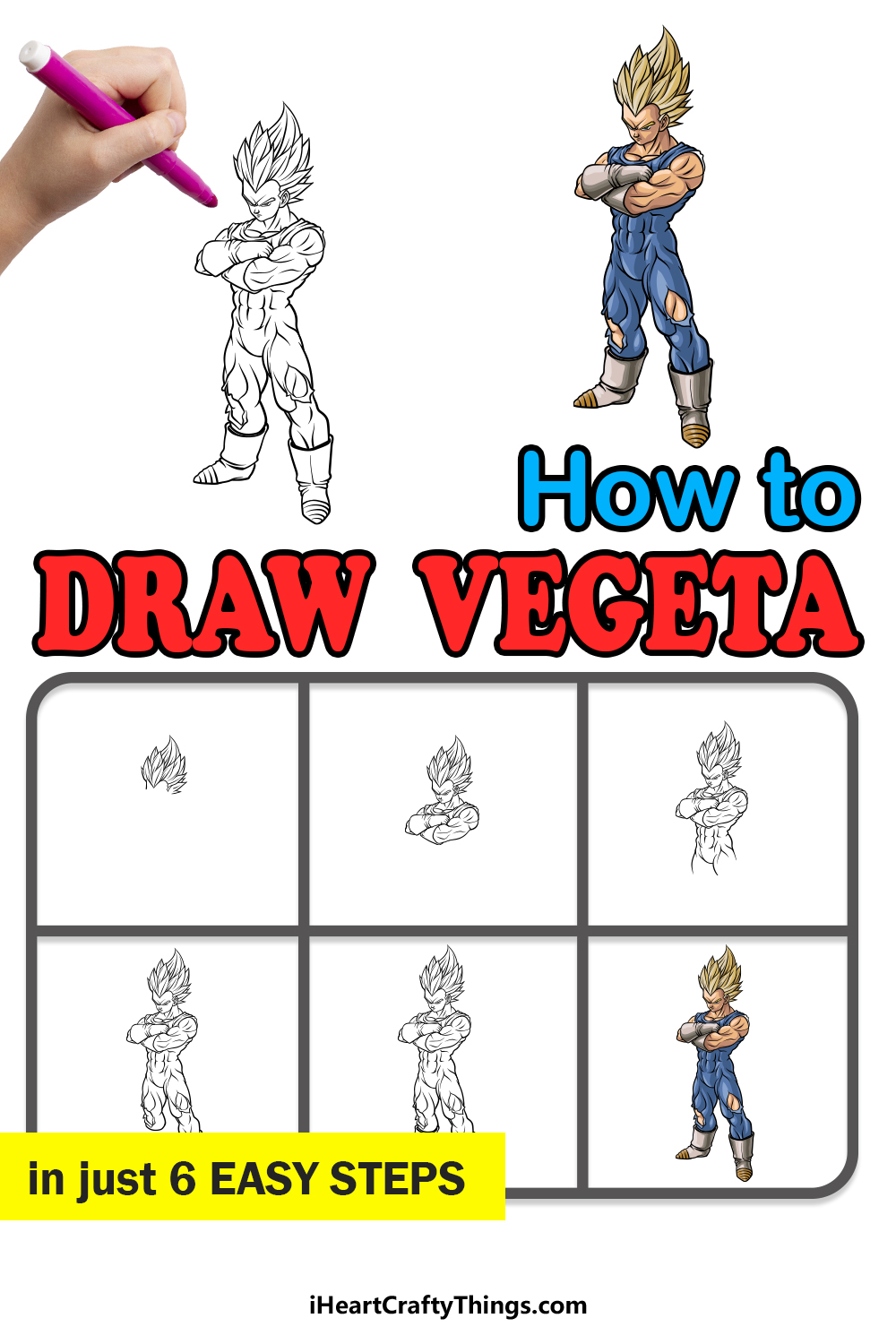 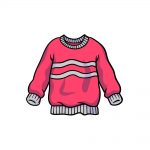 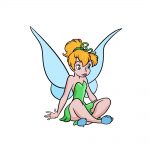