Star Wars is possibly the most popular and recognizable series in the world. It would be hard to find someone who wouldn’t be able to name or describe at least one character or line from the films!

One of the most iconic designs to come out of the series is that of the stormtrooper. These soldiers don their unique white armor to fight for the evil Empire.

Despite fighting for the bad guys, their armor is undeniably cool, and it can be fun to learn how to draw a stormtrooper for that reason!

If you would like to know how you can do that, then be sure to read to the end of this guide.

Our step-by-step guide on how to draw a stormtrooper will show you how to create this iconic soldier. 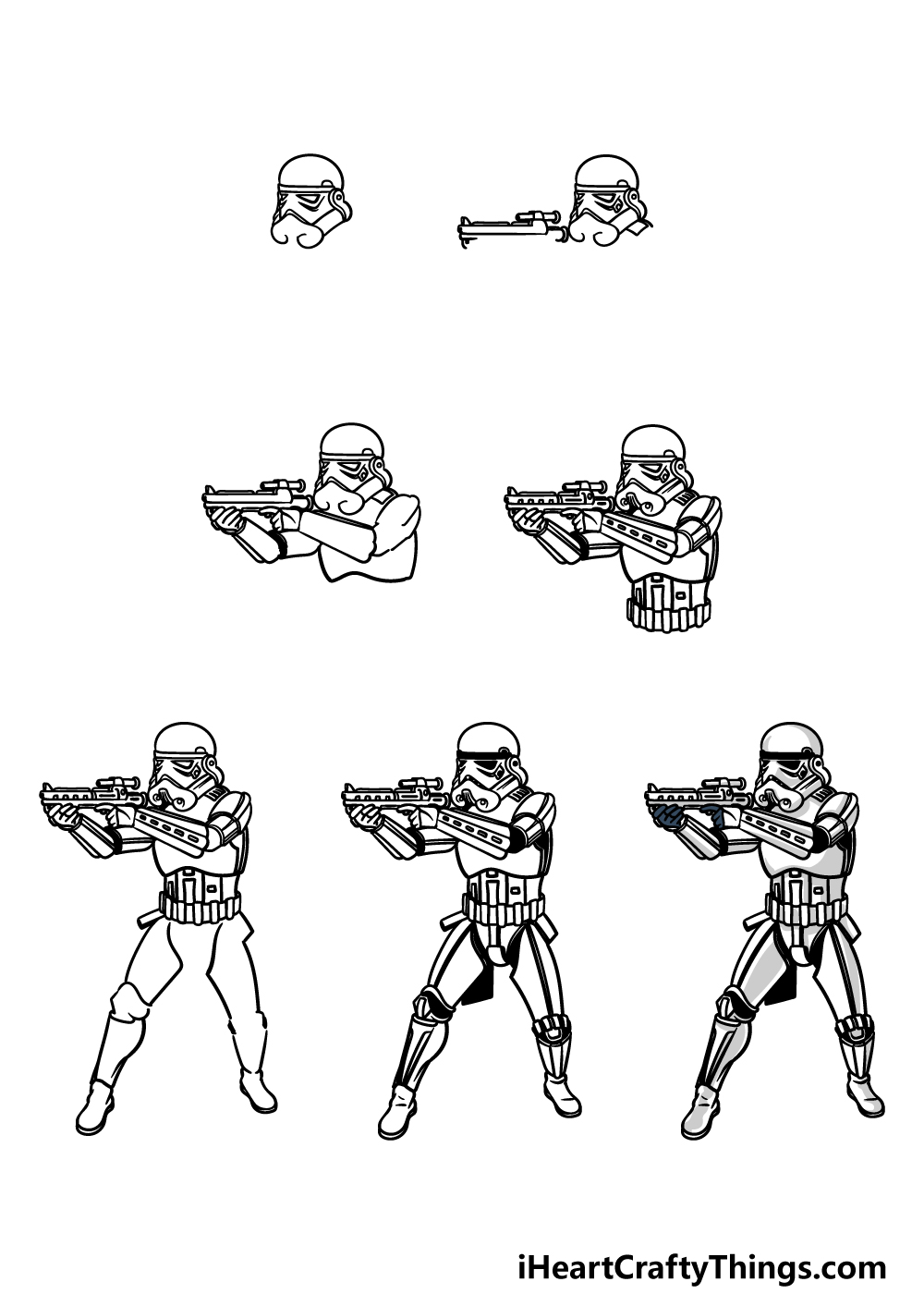 How to Draw A Stormtrooper – Let’s get Started! 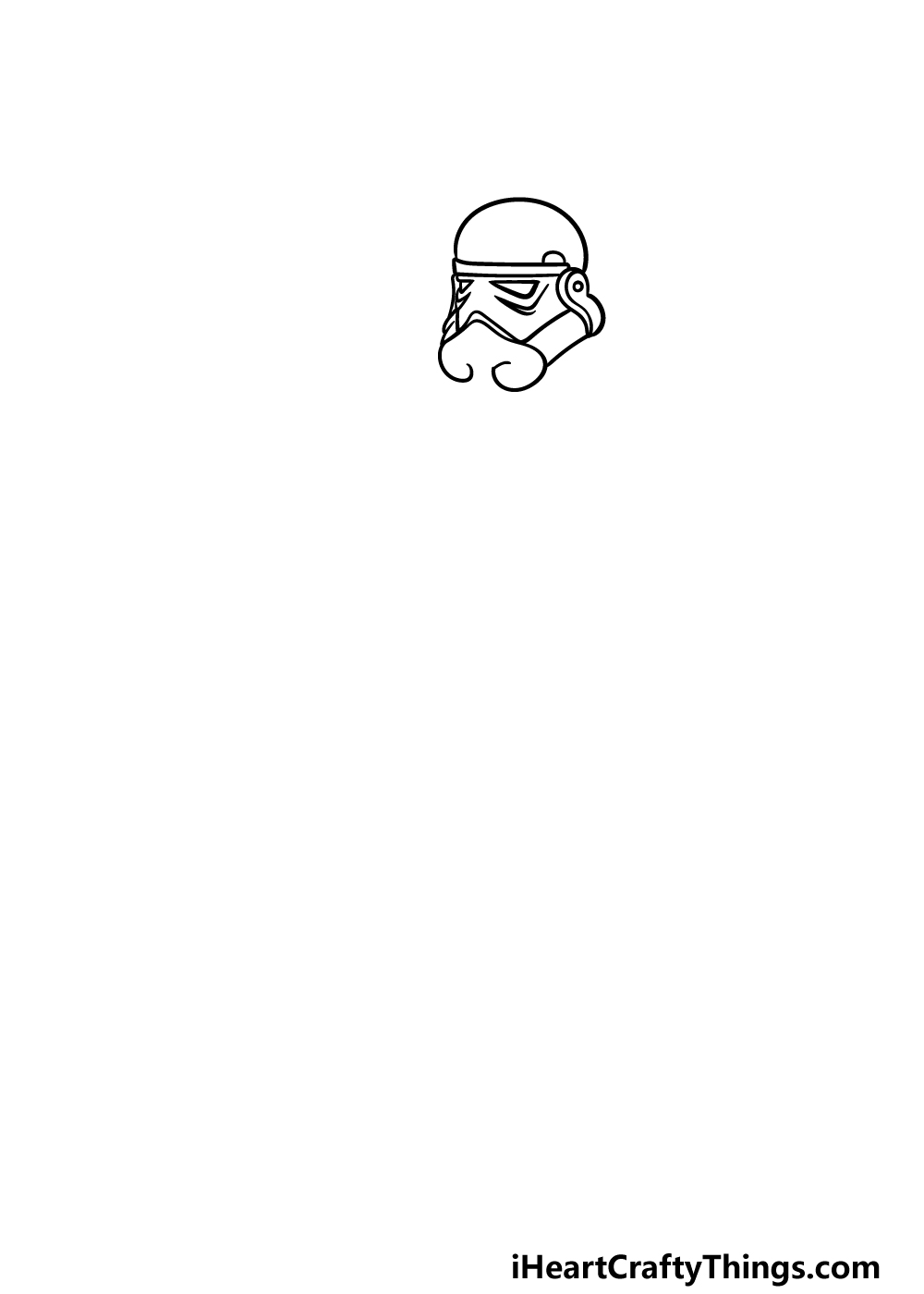 To get this guide on how to draw a stormtrooper going, we will start with the distinctive helmet. There are lots of small parts and details to this helmet, and it has a domed top to it.

Then, there are some triangular shapes for the eye coverings with a sort of pipe ventilation system at the base.

When you have replicated the helmet as it appears in the reference image we will be ready for the next step.

Step 2 – Draw his rifle and some helmet details 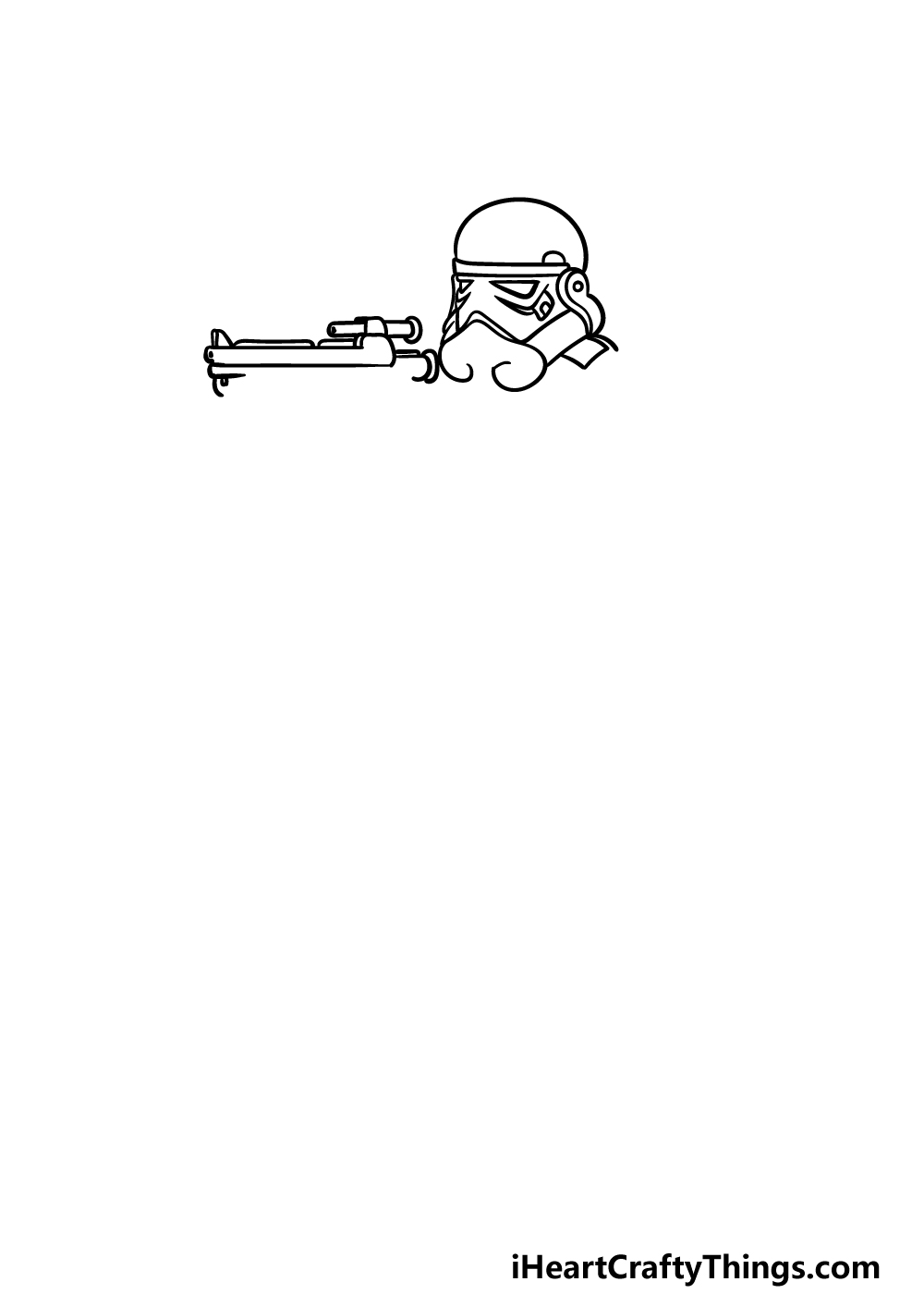 For the second part of your stormtrooper drawing, we will be giving him his rifle. You can draw this with several straight lines, and you can also add a small cylindrical scope above it.

There are also some minor details that we added to his helmet, and you can also draw the top of his shoulder.

Step 3 – Add his arms and chest in this step 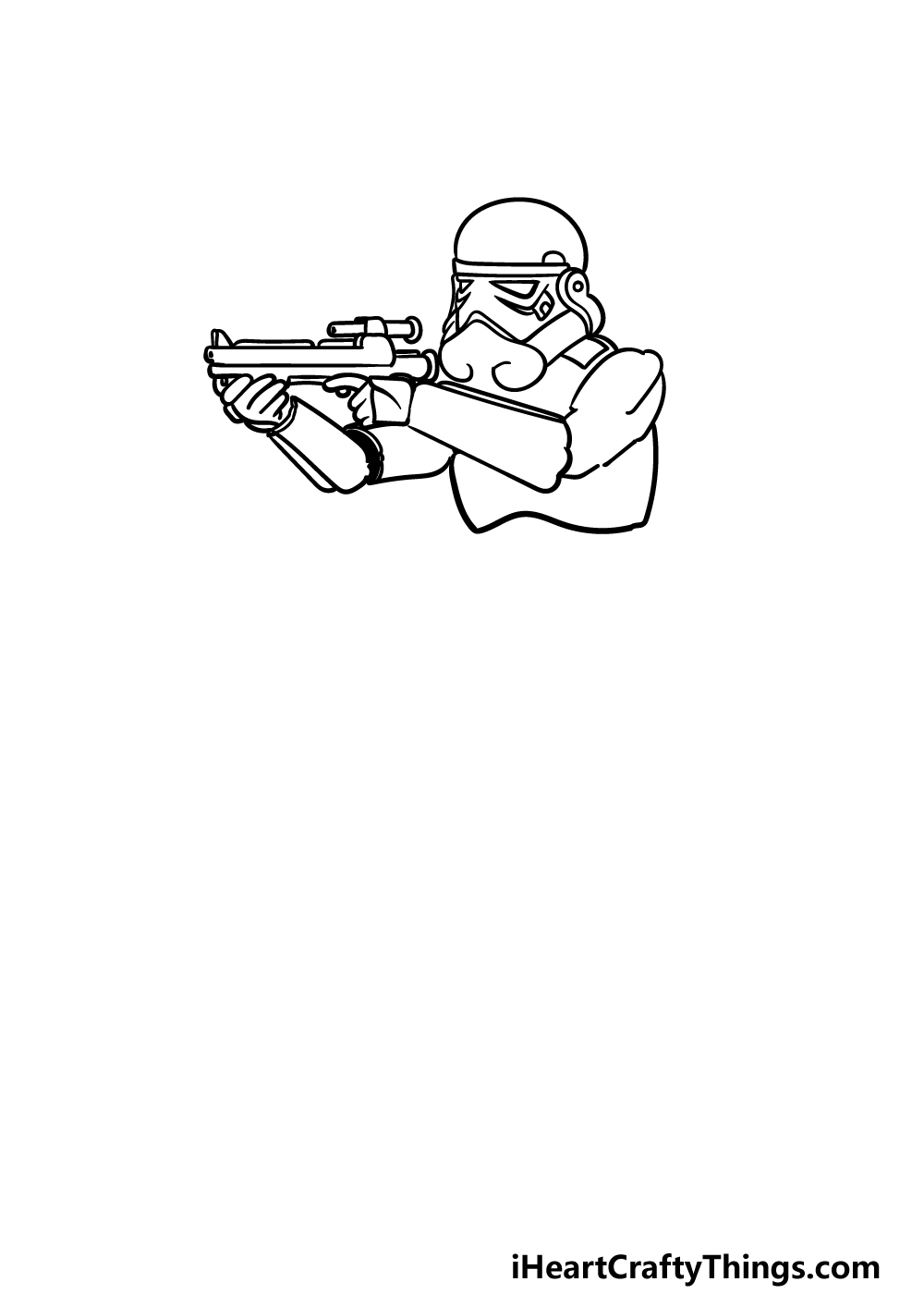 Now we can add some arms and a chest to your picture in this step of our guide on how to draw a stormtrooper. Each arm has two main armor segments covering them, with a small black section between them.

They will also be positioned in such a way as to have him aiming the rifle that you just drew up in the air.

Then, we will be using some curved lines for the sides of his chest piece. That’s all we will be drawing in this step, so let’s proceed to the next step! There will be a lot of details that we will be adding to your stormtrooper drawing in this next step, so be sure to take it slowly and follow the guide closely!

Once the helmet and arms are detailed, you can then add lots of smaller rectangular shapes for his waist extending from the chest piece.

His belt will also go at the base of this section, and will be drawn with more small rectangle shapes. 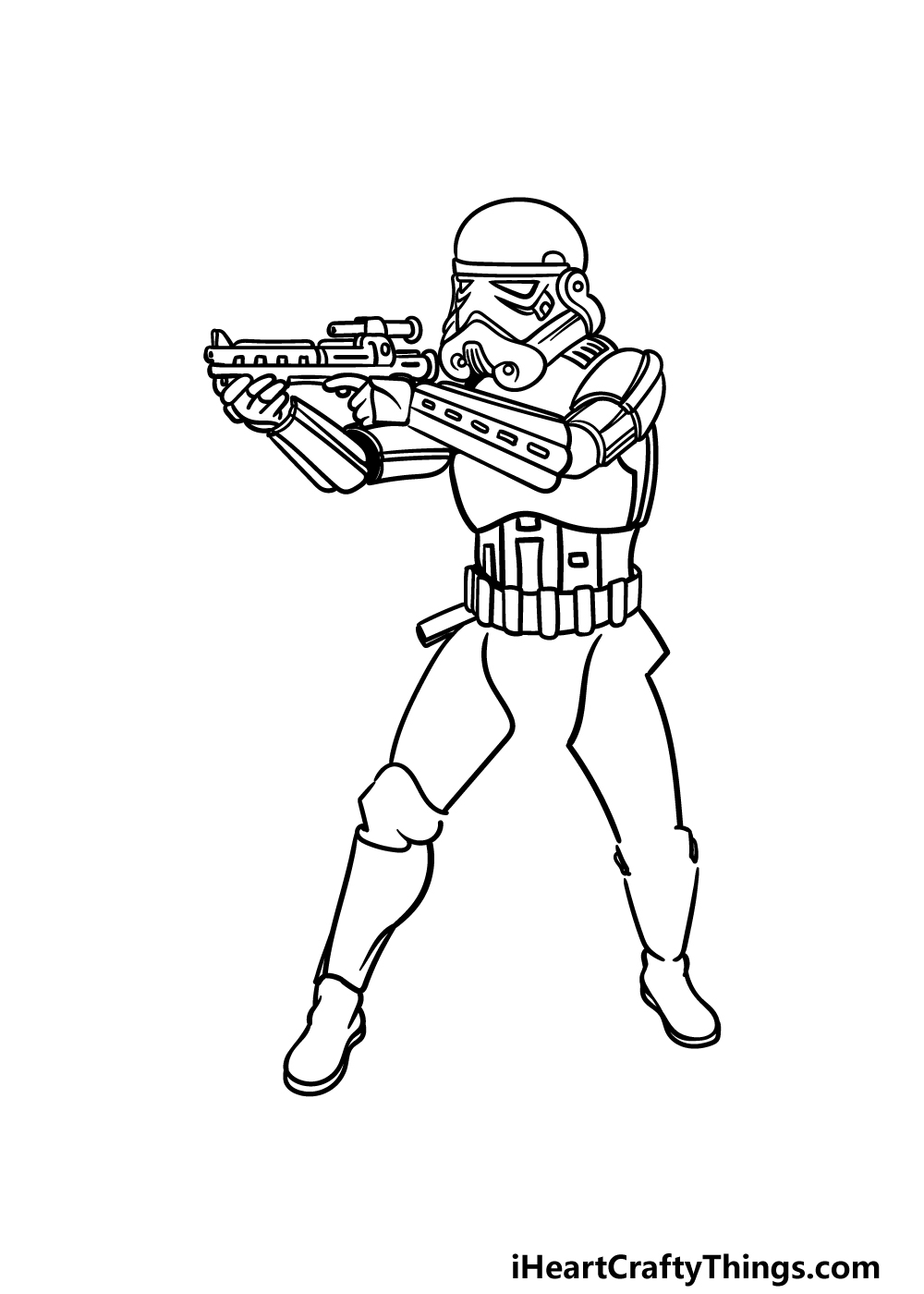 You’re nearing the end of this guide on how to draw a stormtrooper, and in this step we will be drawing the start of the outlines for his legs. Much like his arms, his legs have several sections to the armor covering them.

You can use some curved lines to start drawing these leg armor sections, and as shown in the reference image there will be four sections each, including the foot covering.

You’ll notice a few empty spaces, but we will fill those in shortly! This step of your stormtrooper drawing will be about finishing off the final little touches and details to have you ready for the final part.

Most of these details will involve adding some black detail highlights between various sections of the armor. Basically, any empty spaces on the drawing will be filled in with some detail!

Once you have finished these details, you can also add some additional ones of your own to really finish it off.

There are tons of Star Wars characters that would go perfectly with this stormtrooper, from other stormtroopers to Darth Vader himself!

You could also recreate your favorite Star Wars scene involving stormtroopers by drawing a background to fit that scene. How will you finish off this picture with your own touches?

Step 7 – Finish off your stormtrooper drawing with some color This final step of our guide on how to draw a stormtrooper will deal with finishing off by adding some colors.

Stormtroopers are not exactly known for being colorful, in fact their armor is composed entirely of a black and white color scheme.

Despite this, there are still ways to bring some color variations to this image. We used some shades of grey to give the surfaces of his armor some more definition.

Another way to add some color variety would be to add some brighter colors to the background elements that you may have added.

You could also draw some more colorful characters to go along with this stormtrooper as well! What ways will you use to bring some color to this artwork?

5 Tips To Make Your Stormtrooper Drawing Even Better!

Aim for an awesome picture as we make this stormtrooper sketch even cooler!

A stormtrooper is a formidable adversary, but this is even more the case when there is an army of them. For that reason, we think you could add some more to this drawing of a stormtrooper!

Now that you have finished the guide, you have everything you need in order to add as many stormtroopers as you need for your army.

How many do you think you would like to add?

Once you have drawn this first stormtrooper, you could try out different poses as well. This would be cool to try if you wanted to have more than one stormtrooper as we suggested in the first tip.

Maybe one could be throwing a grenade while another runs for cover. You could use the movies or other Star Wars media for ideas on how to pose them!

This stormtrooper drawing shows a classic stormtrooper, but there are many variations. These could also be added to the drawing!

Some popular variations would be the sand trooper and the snowtrooper. Images of these stormtrooper variants could be found online, and they could help to add some variety,

What are some other stormtrooper variants you could add?

If you really want to escalate things, then you could add some major Star Wars characters. For example, maybe you could add Darth Vader or the Emporer.

Alternatively, you could have the stormtrooper fighting against some good characters like Luke Skywalker or maybe Han Solo.

This would be a great way to show off your favorite Star Wars characters!

A stormtrooper can operate in many different environments, so you could create some awesome backgrounds for your stormtrooper sketch!

You could start by picking a favorite scene from the movies that involved stormtroopers. Then, use that to design the background for your drawing.

Or, you could create your very own Star Wars battleground with your own ideas for a planet, setting or location inspired by the series. Where would you set this drawing?

Your Stormtrooper Drawing is Complete!

All 7 steps of our guide on how to draw a stormtrooper have been completed, and you have landed up with an incredible artwork at the end of it.

This drawing was a bit on the tricky side as there were lots of smaller parts and elements to consider when drawing the armor. We hope that this guide made it easy and fun for you to work on this iconic design despite all these elements!

When you have finished this guide, it’s up to you to take the picture even further if you wish! We mentioned how you can draw a background or add some characters and extra details, but these are just a few ideas you could try out.

There are so many more awesome drawing guides on our website for you to enjoy as well! Be sure to keep visiting, as we have more on the way.

We would love to see your cool stormtrooper drawing, so when it’s done please share it on our Facebook and Pinterest pages for us to admire.