Throughout human history, mankind has accomplished incredible feats in many fields, such as architecture, agriculture, medicine and many other practices.

These feats would have been impossible without the brilliant minds of many men and women who have devoted their talents to scientific discovery and innovation.

Scientists also feature in many forms of storytelling and media, and they often capture quite a lot of public fascination.

Learning how to draw a scientist can be a great way to show appreciation for these important figures!

If you love science and would like to show it, then this is the guide for you!

Our step-by-step guide on how to draw a scientist will show you how it can be done while having loads of fun! 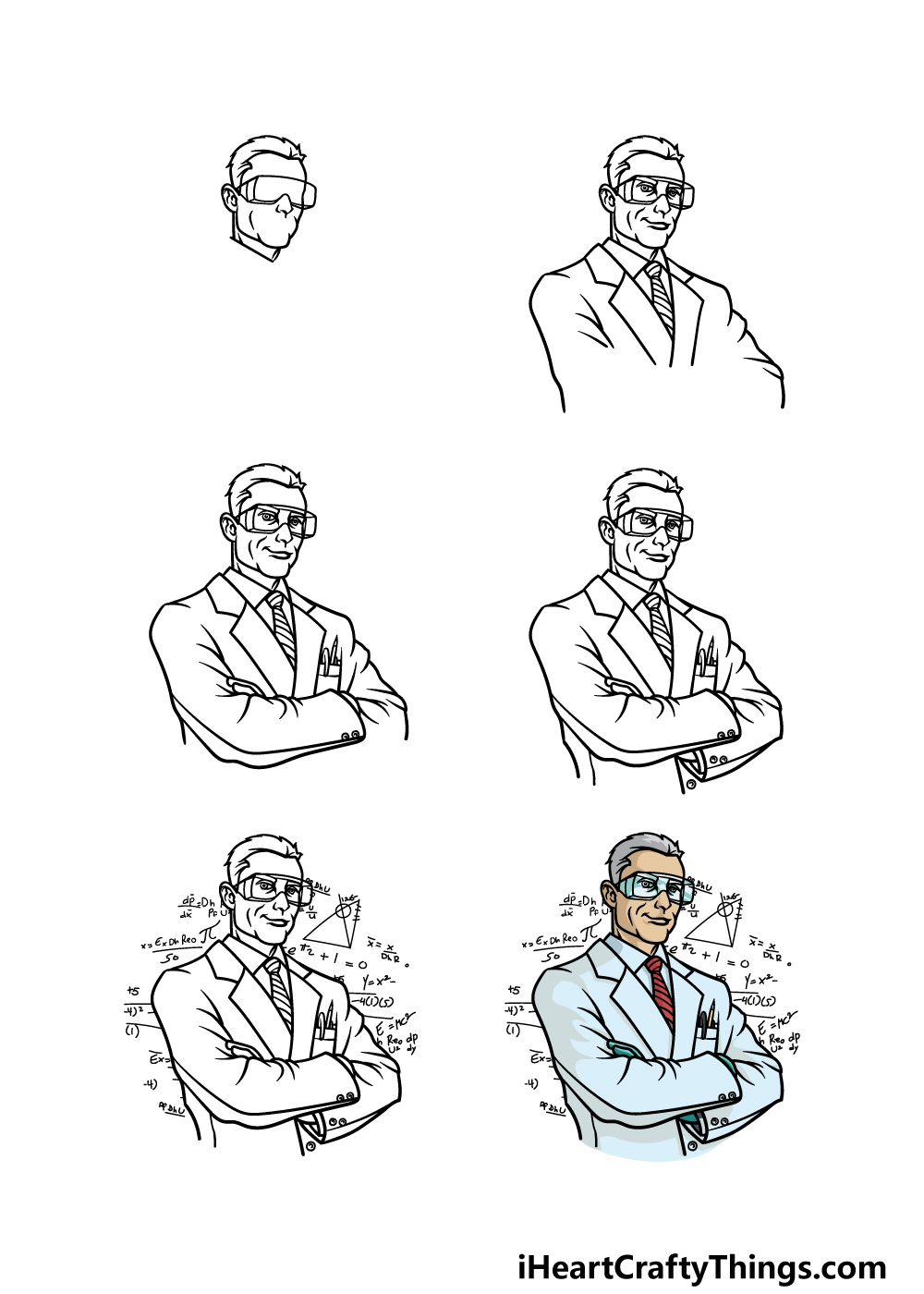 How to Draw A Scientist – Let’s Get Started! 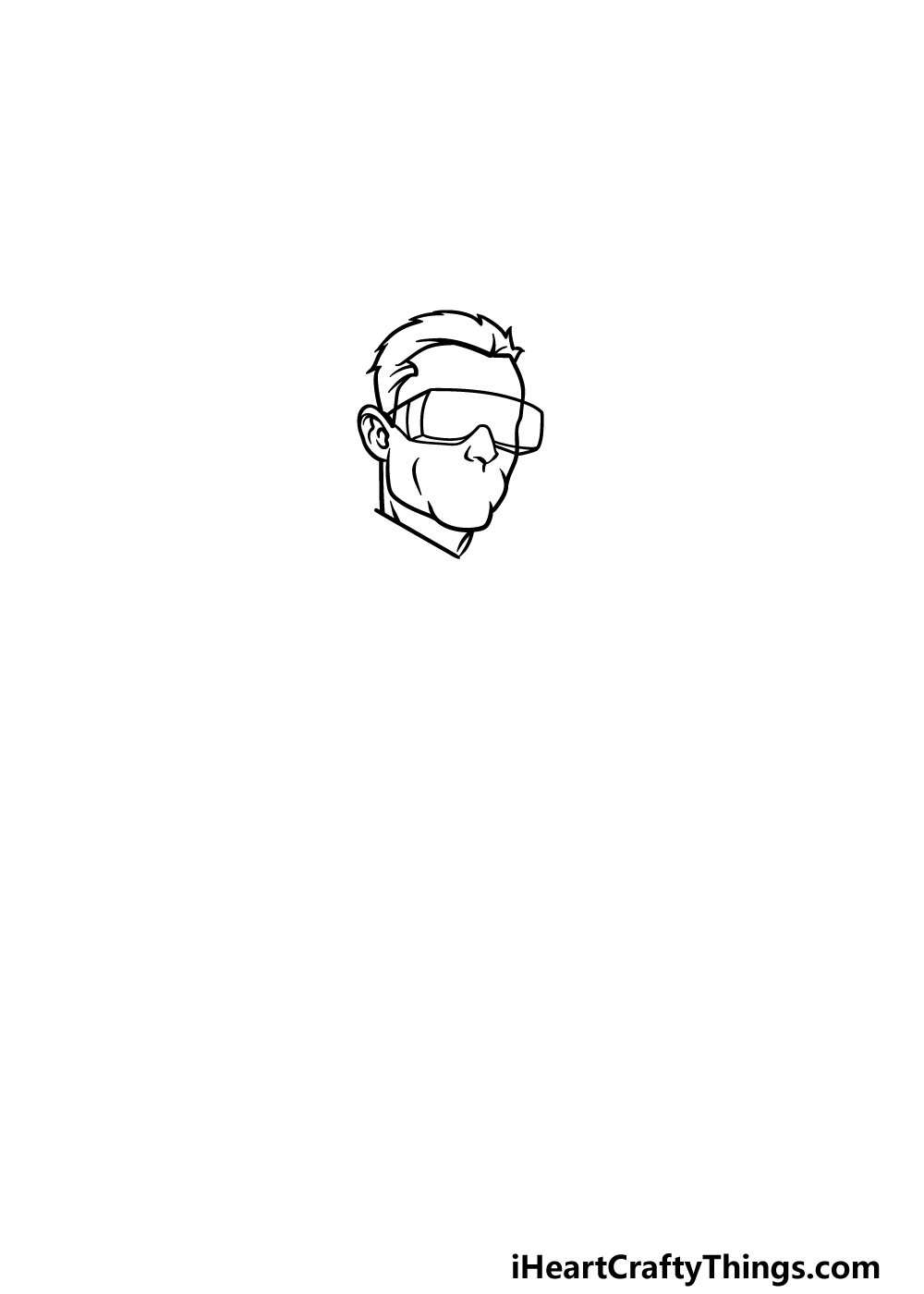 To kick off this guide on how to draw a scientist, we will be starting with his head.

This will be a rather detailed drawing, so if you find it a bit intimidating then you can draw with your pencil first before going over it with a pen later.

With that in mind, we will start drawing his head. He will be wearing some protective goggles in order to protect his eyes from any chemicals or other substances he may be working with.

Step 2 – Next, draw his facial details and chest 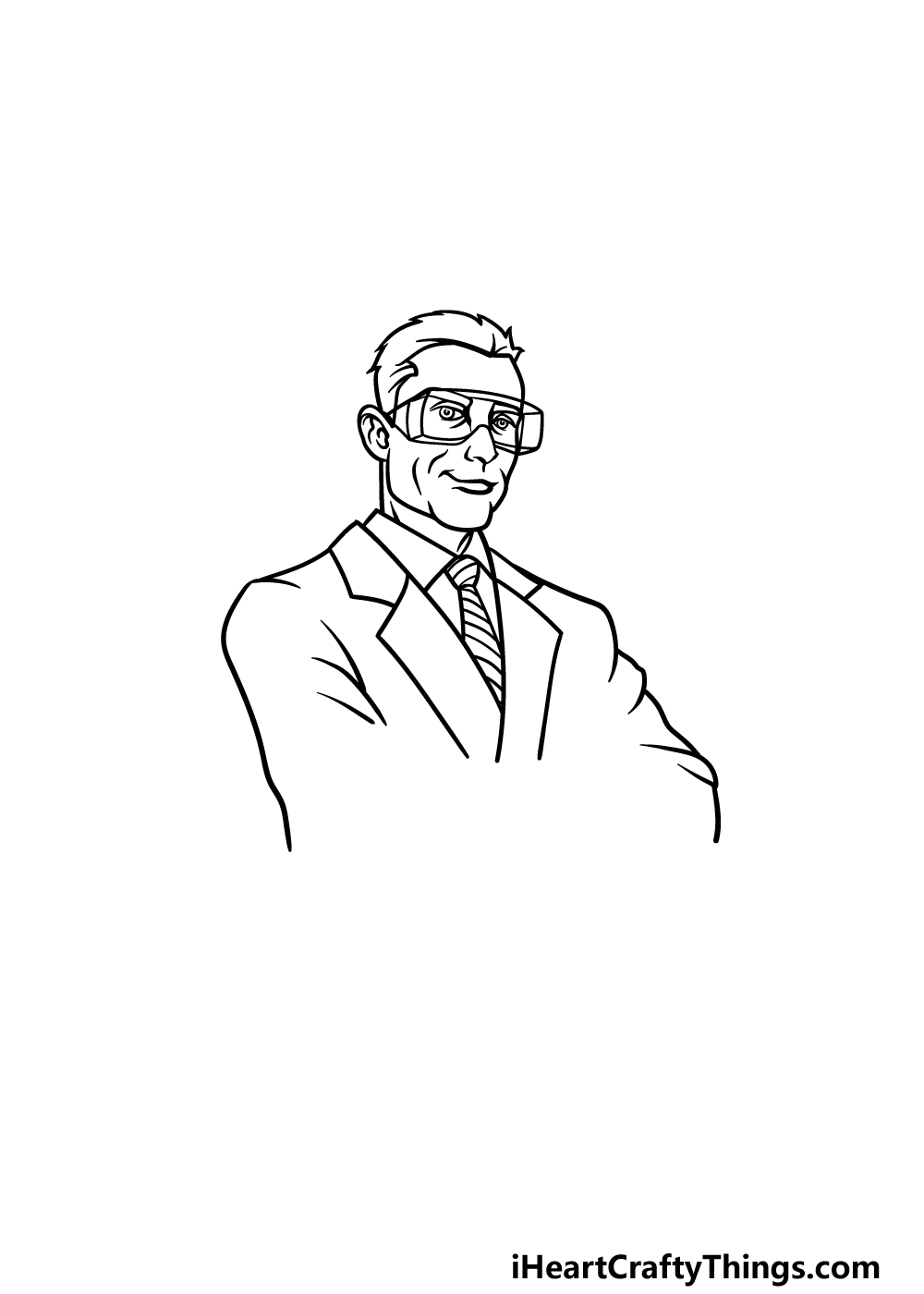 We will be adding quite a lot to your scientist drawing in this step! First, we will focus on his face. Start by drawing his eyes behind his goggles.

Then we will be using some simple linework to add his nose, mouth and some creases to his cheek. The facial expression we are depicting makes him look pretty proud of himself!

Then, we will draw his chest and start his arms. First, add a collar to the base of his neck and then you can draw his tie coming down.

You can then draw the collars of his jacket coming down, and add his shoulders as well. Finally, we will be using some curved lines for the start of his arms. 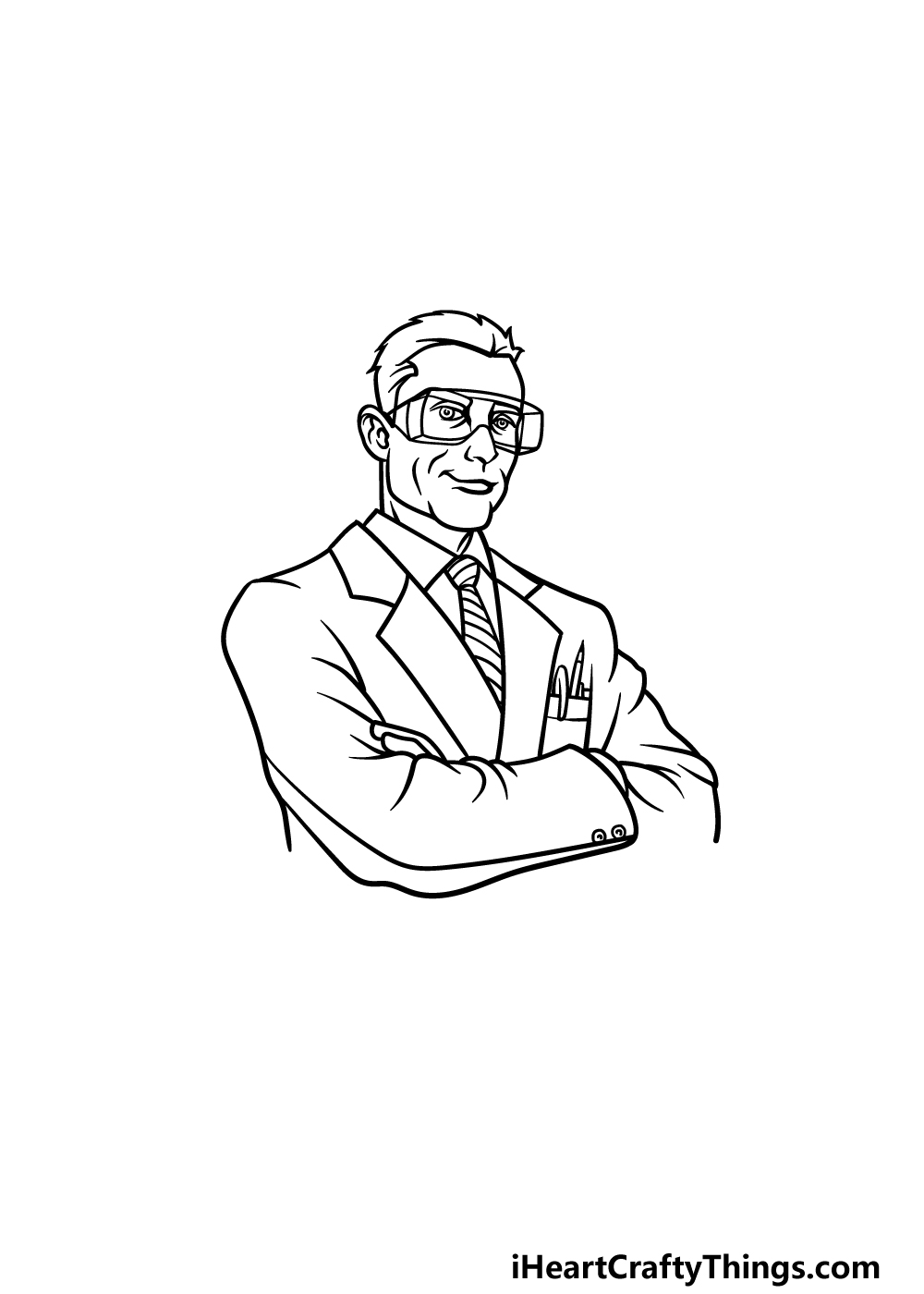 Now that you have started the arms he is crossing at his chest, you can now finish them in this step of our guide on how to draw a scientist.

Using the reference image to guide you, draw the arm on the left crossed over to the other side, and then draw his other arm tucked in.

On the right-hand side of his crossed arms, you can draw a pocket with some pens and pencils in it, as scientists need to take lots of notes!

Once you have drawn all of these aspects, you’ll be ready for step 4.

Step 4 – Now, finish the outline for your scientist 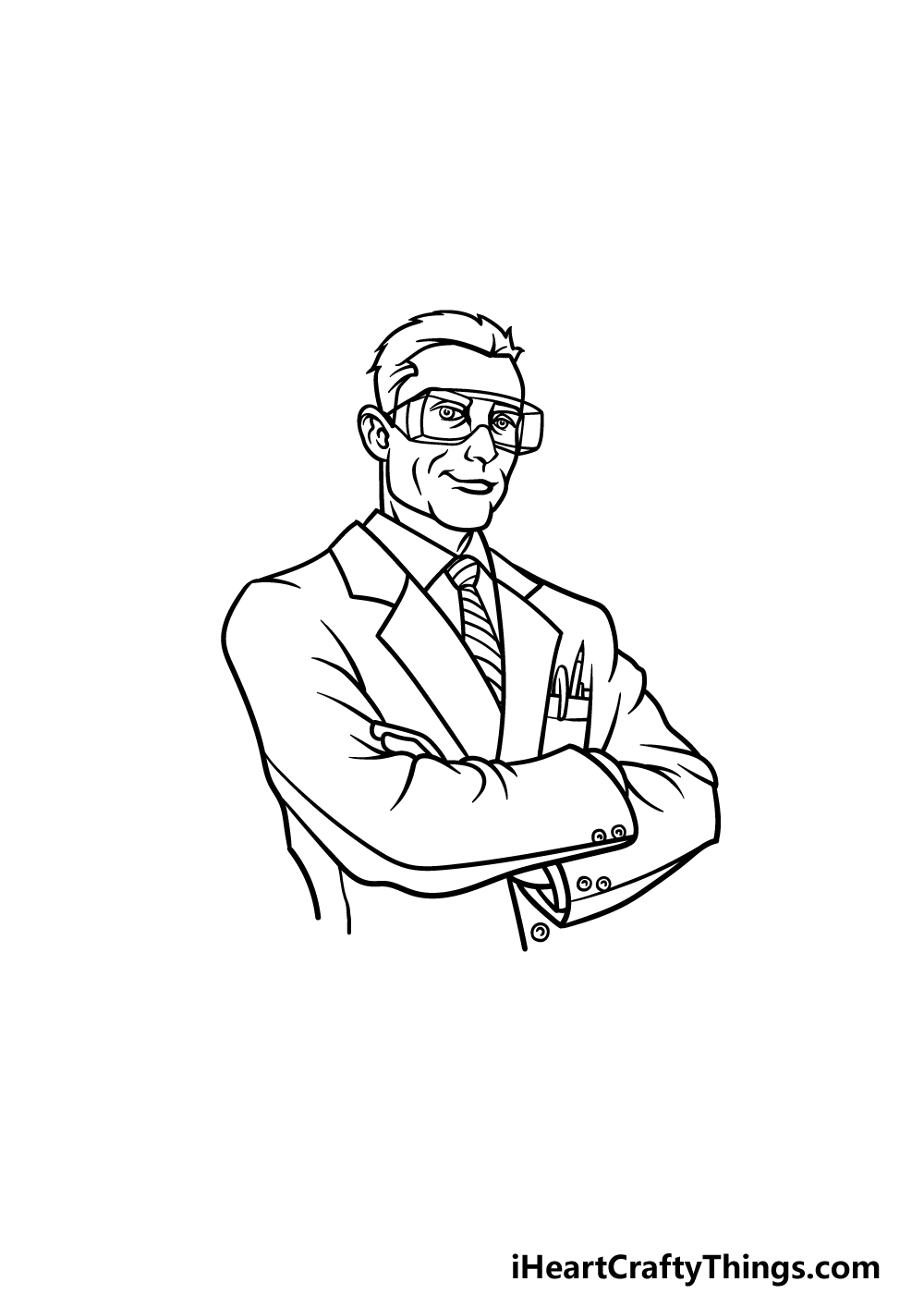 It’s almost time to move on to some final details, but first we need to finish off the outline for your scientist drawing.

You can do this by finishing off the sleeve for the arm on the right. Like the other one, this sleeve will have some buttons on it.

Then, we will draw his waist coming down from his arms, and you can add a button there as well. Then it’s on to step 5 for some final touches!

Step 5 – Finish off your scientist drawing 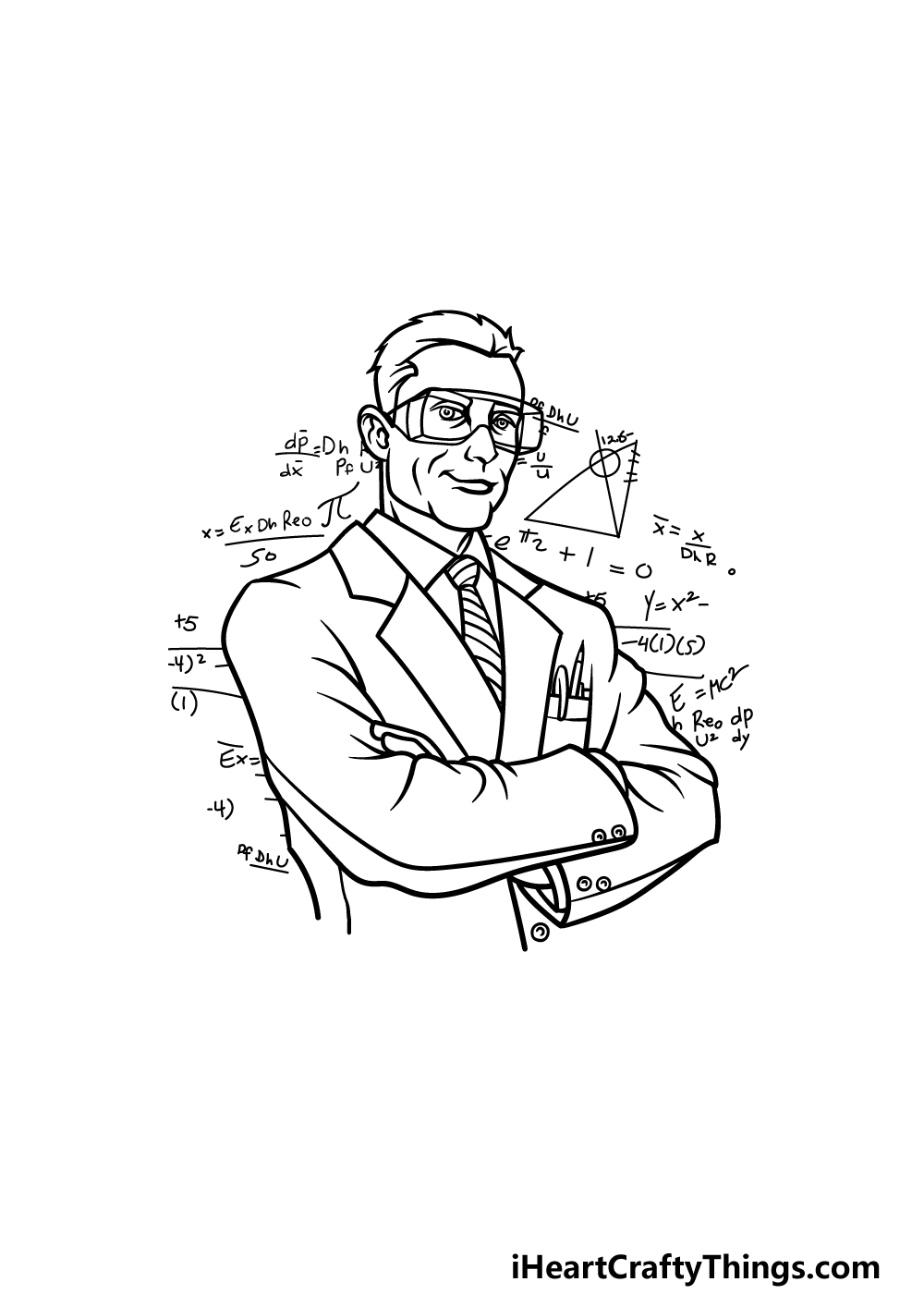 You have finished most of the drawing now, but in this step of our guide on how to draw a scientist we will finish off with some final details.

Scientists in all fields have to deal with lots of mathematical equations and theorems, so we thought that would be a fun theme for th background of the image.

We drew some mathematical symbols and equations to the background, and you can replicate them as they appear there to go with a similar theme.

If you prefer a more tangible background, then you could draw a setting for him instead. Maybe he’s in a lab surrounded by vials and chemicals, or maybe there could be a cool robot that he is building!

These are just a  few ideas, so will you go for our background or draw your own unique one?

Step 6 – Finish off your scientist drawing with some color 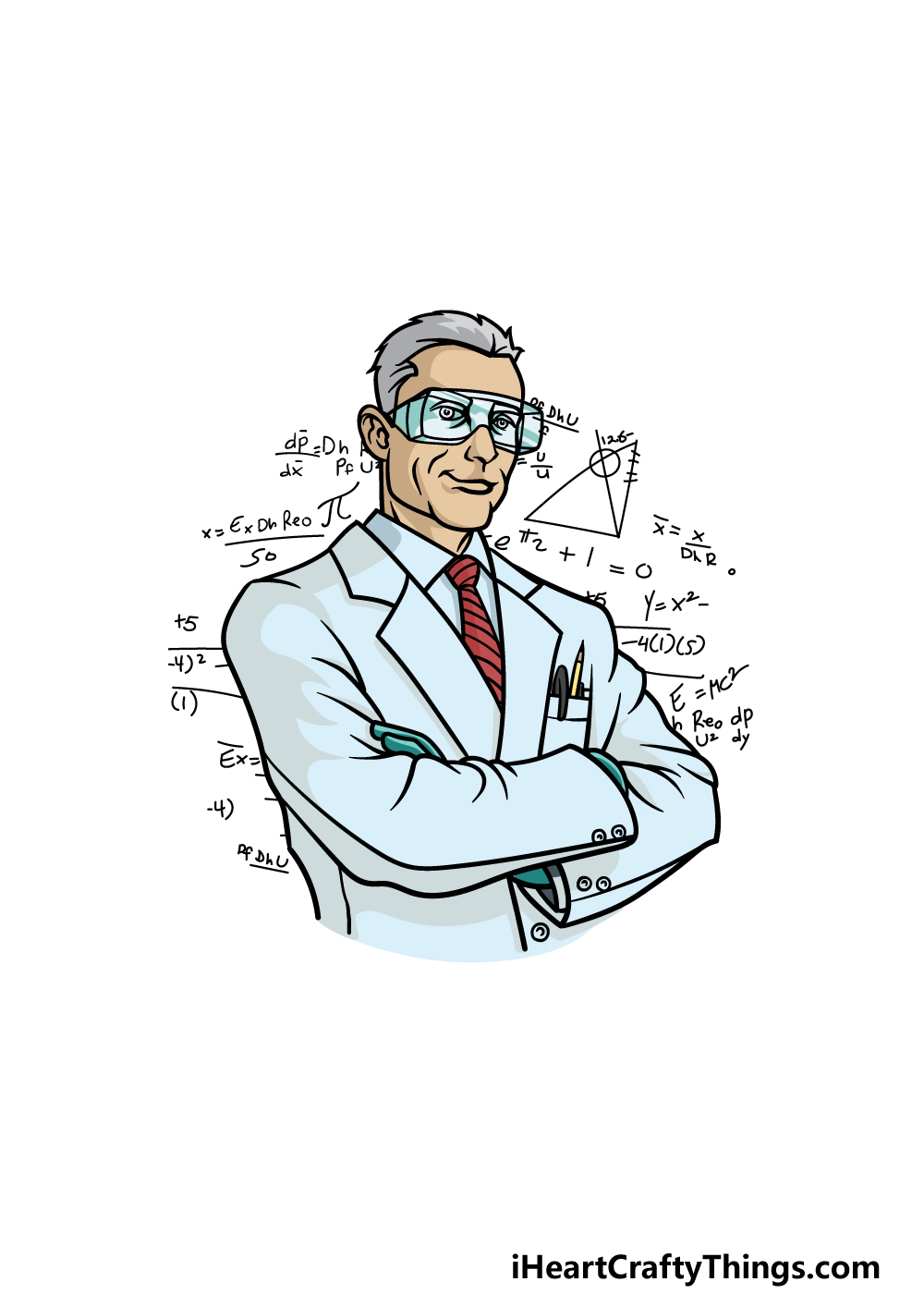 For the final part of your scientist drawing, we will finish off with some cool colors. In our reference image, we went with a primarily blue color scheme for his outfit and goggles.

To add a splash of warmer color, we colored his tie in red. These are the colors that we chose for our image, but they are just a suggestion that you can use!

This is your drawing, so you can also incorporate some colors of your own choosing instead.

Choosing the colors is the first step, then all that remains is picking the art mediums that you will use to achieve them.

You could go for some more intense acrylic paints or colored markers for one look. Watercolors and colored pencils would work better for a more muted look.

These are just a few of the mediums you could use, so will you go for one medium or a mix of a few?

Your Scientist Drawing is Complete!

With that, you have completed all six steps of our guide on how to draw a scientist!

We mentioned before how a more detailed drawing can be quite tricky to draw, so this guide was created to make sure that there would be as little difficulty as possible.

Whenever you take on a new drawing, always remember to take it slowly and step by step and you’ll definitely be able to do it!

Now that you can draw this scientist, it’s up to you in how you take it even further.

Whether you draw a background, show what incredible science he is working on or use some creative colors and mediums, just be sure to have fun expressing yourself!

Once you have completed this drawing, you can come on over to our website where we have tons of amazing drawing guides for you to enjoy. Be sure to keep visiting, as we upload new ones frequently. 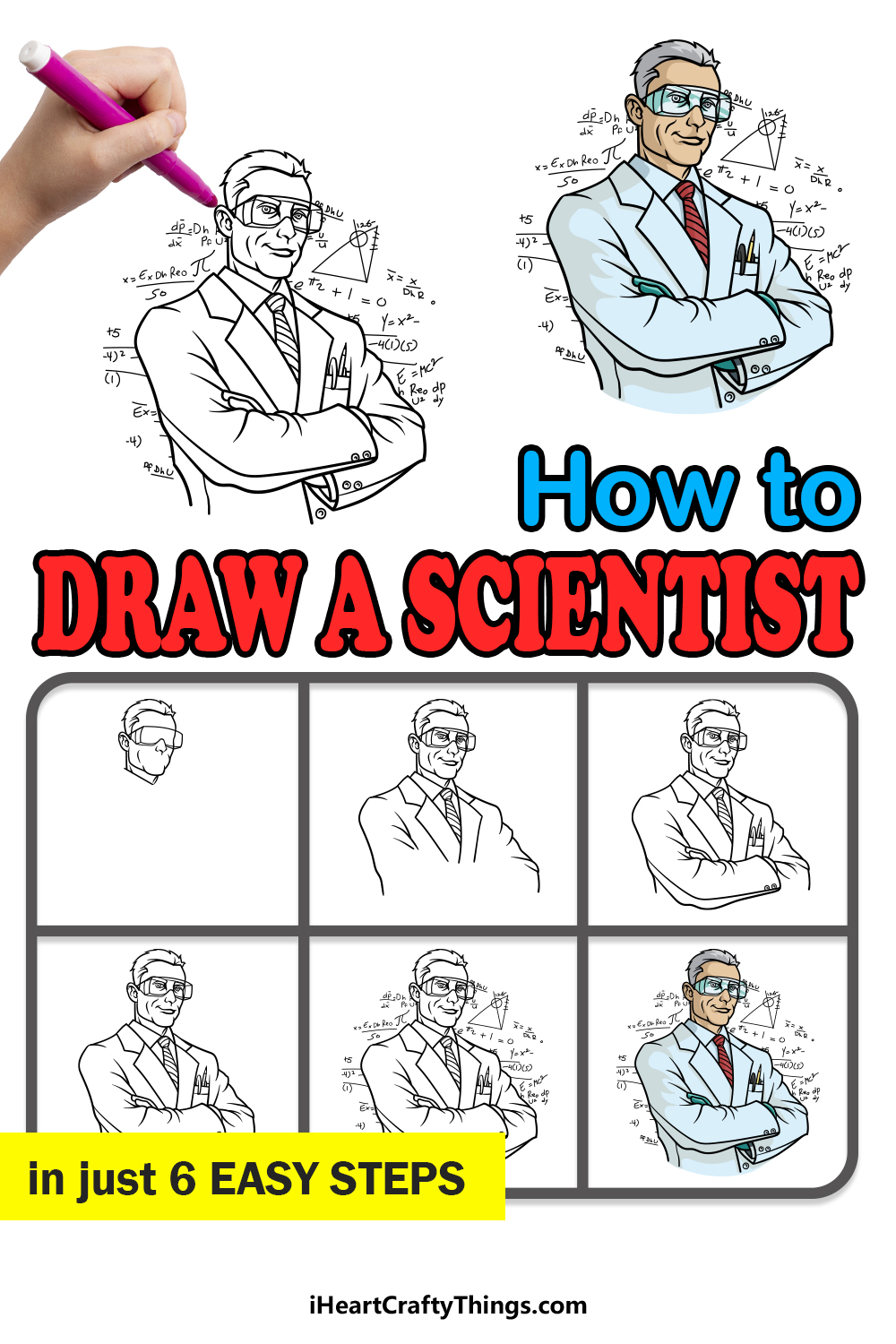 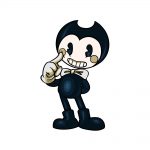 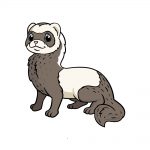