Lilo And Stitch is one of the most unique and beloved animated films of all time.

It features a unique and original premise of an alien befriending a little girl in Hawaii, and it has also spawned sequels, TV shows, books and video games.

With so many fans around the world, it can be great for these fans to learn how to draw Lilo And Stitch.

By the end of this guide, you will be able to recreate this famous movie duo!

We hope that you have a great time working with us on this step-by-step guide on how to draw Lilo And Stitch! 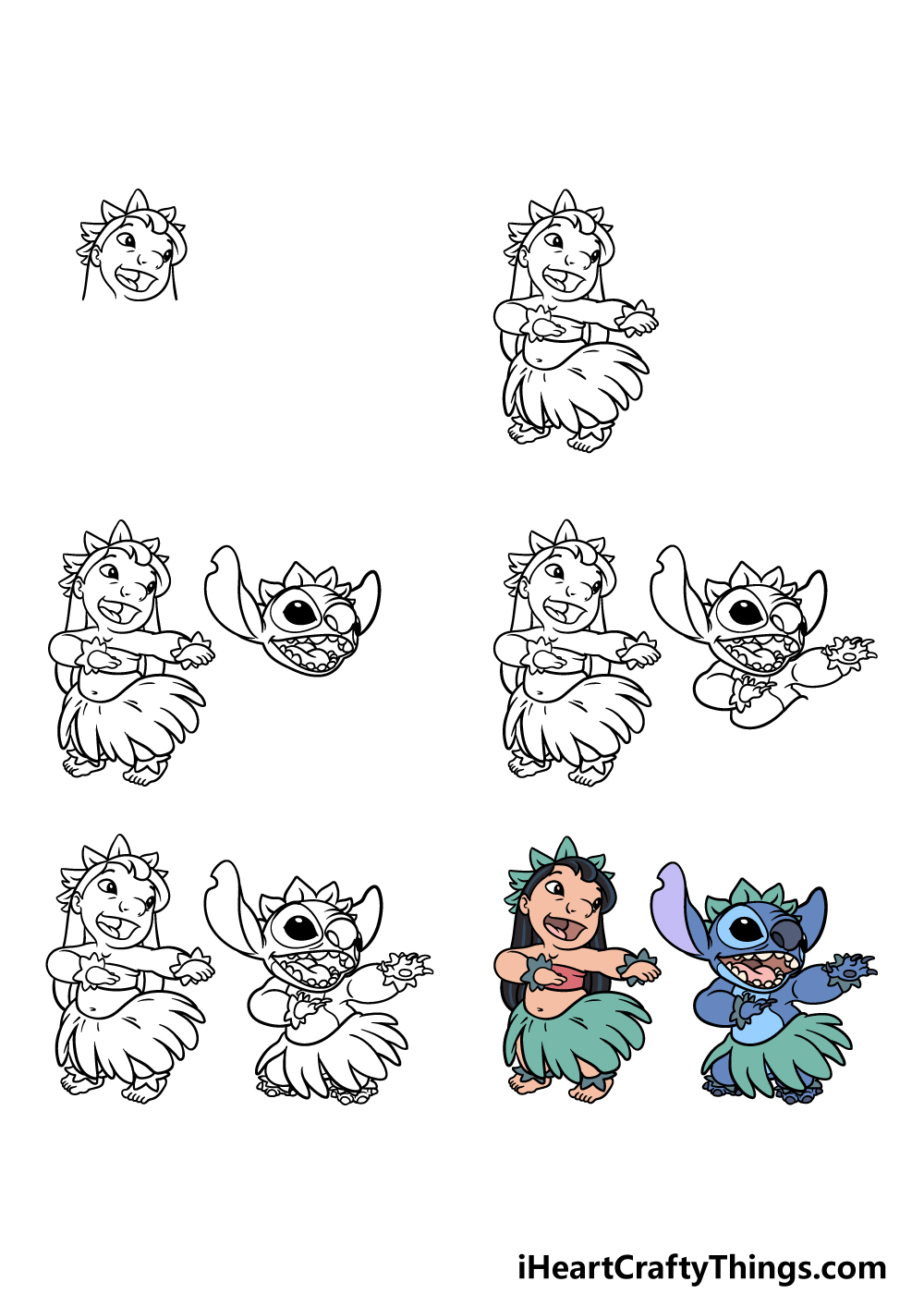 How to Draw Lilo And Stitch – Let’s Get Started! 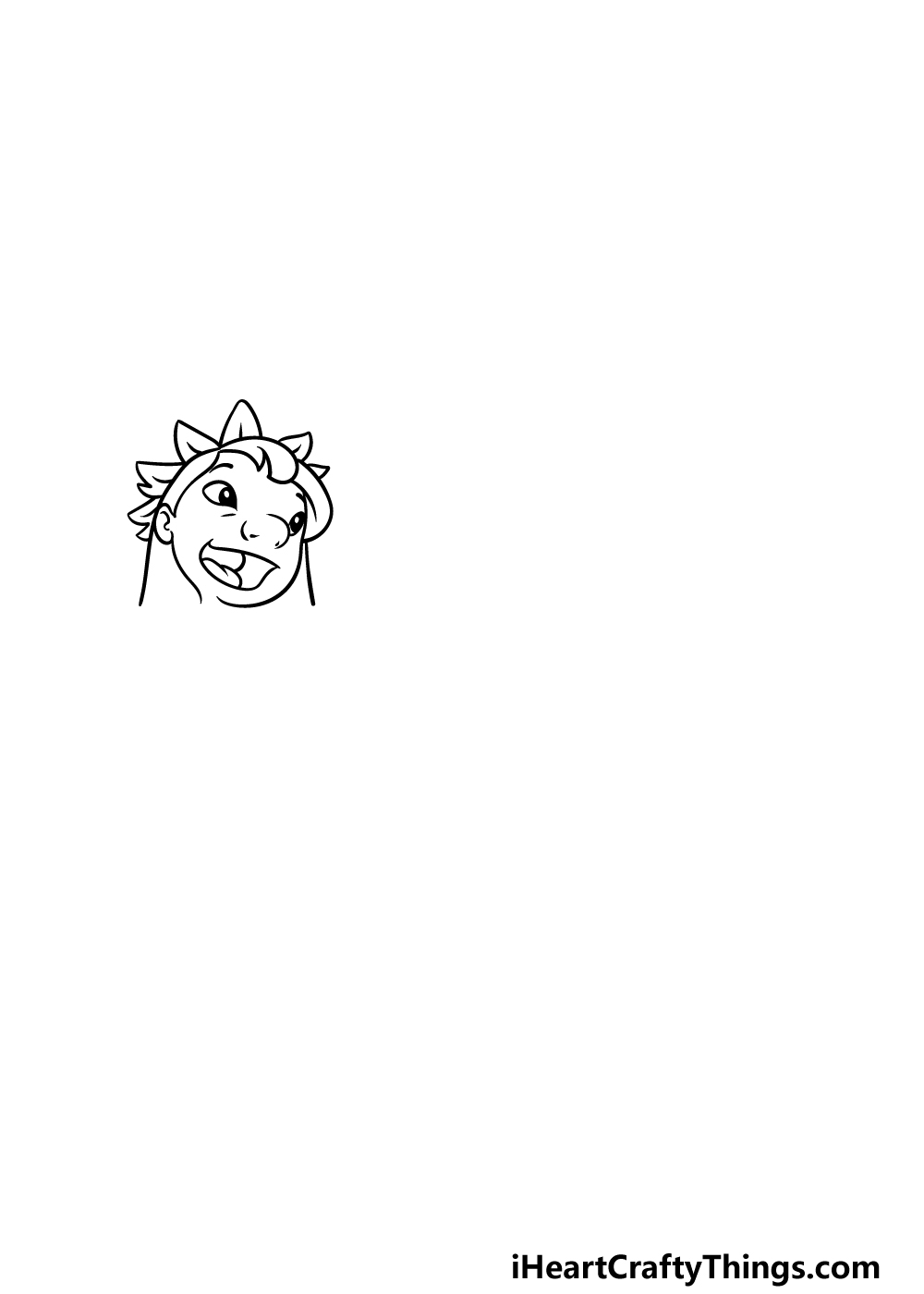 In this first step of our guide on how to draw Lilo And Stitch, we will start with the head of Lilo.

To start with her head, you may find it easier if you draw a circle with your pencil to form a rough outline for her head.

Then, use two small dots and some simple lines for her nose. Her eyes are fairly far apart on her face and will be drawn with some rounded shapes with sharp points at the sides and large pupils.

Then, you can draw her open mouth and tongue as they appear in the picture to give her a nice smiling expression!

You can then draw the facial outline and then make her hairstyle with some more curved lines for the sides of the hair dropping down behind her shoulders.

Finally, use a row of rounded shapes on her head for the flowers she is wearing in her hair. Then we can move on to step 2!

Step 2 – Next, draw the rest of Lilo’s body in this part 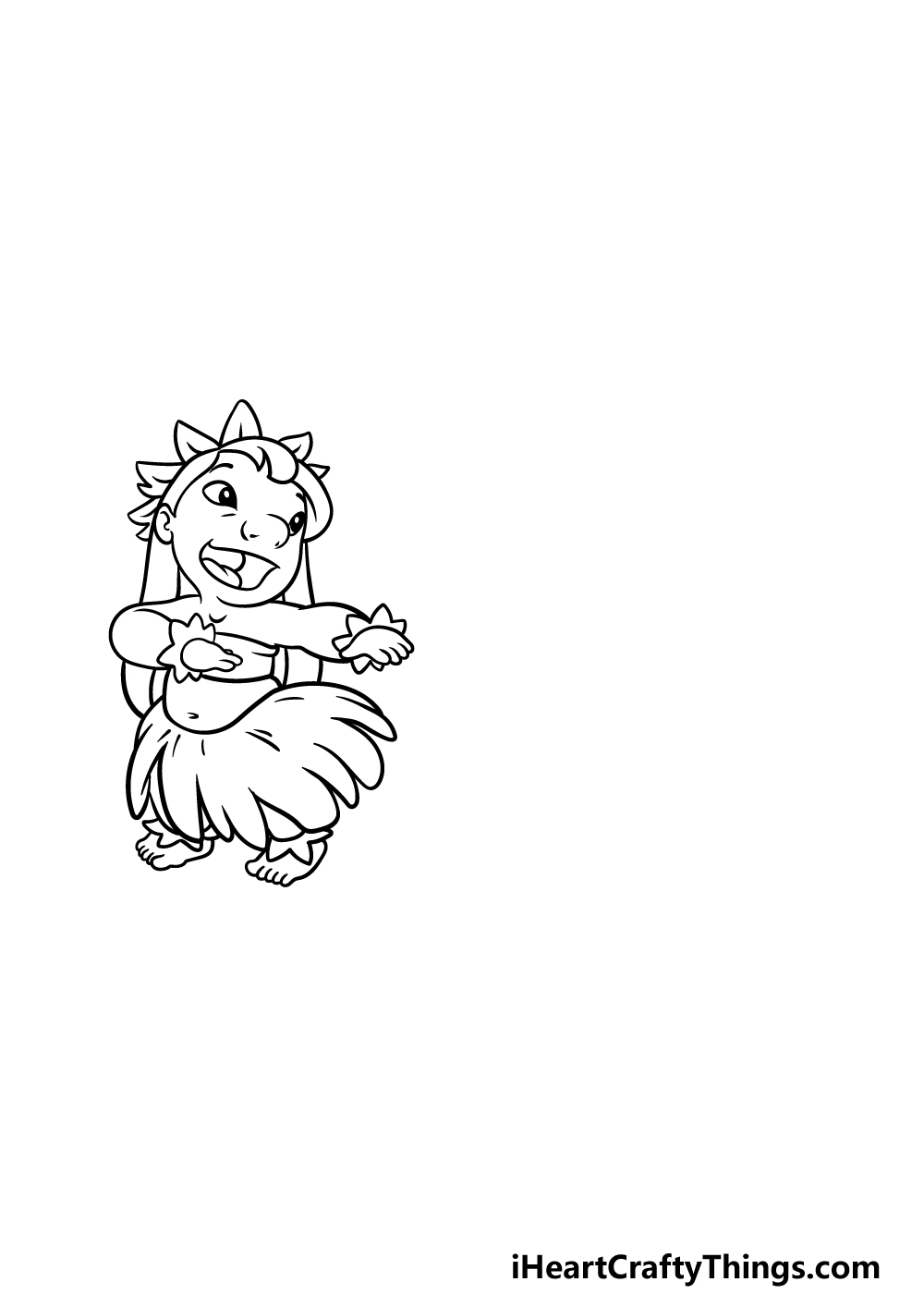 With her head drawn, we can now draw the rest of Lilo’s body for this part of your Lilo And Stitch drawing.

There will be a lot of elements that we will be drawing in this step, so be sure to take it slow and follow the reference image closely. Lilo will be hula dancing in this picture, and we will start by drawing her arms.

Lilo has a very short, almost nonexistent neck, so her arms will run horizontally to the base of her neck. They will be drawn with some curved lines and have some leaves as bangles around her wrist.

Then you can use some more rounded lines for her top and stomach before drawing her grass skirt.

Then draw her feet below the base of the skirt to finish off this step. Once you have replicated the reference image, we can proceed. 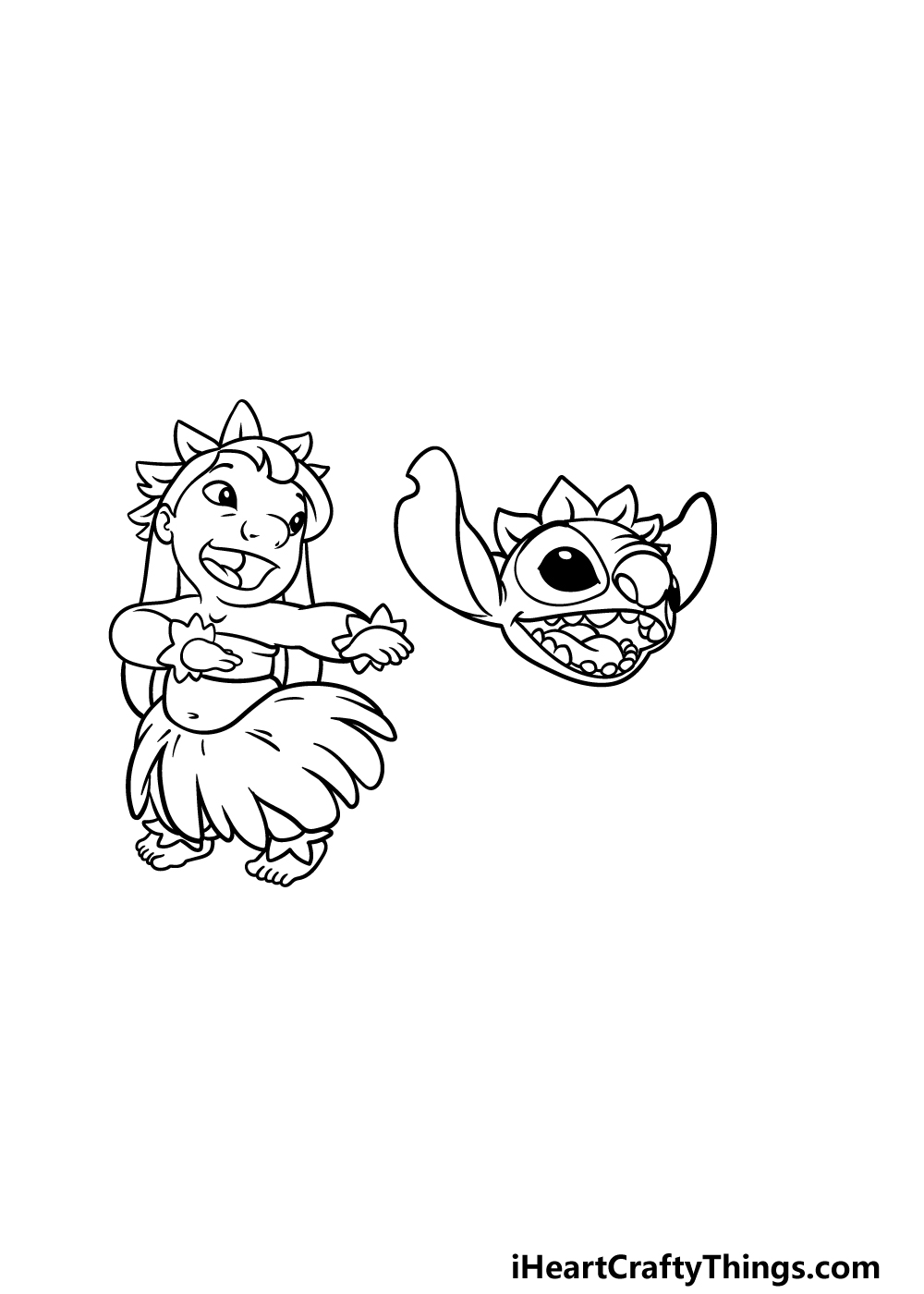 Now that you have drawn Lilo, we can draw her alien pal Stitch in this step of our guide on how to draw Lilo And Stitch.

Much as we did with Lilo, we will begin with his head. His eyes are big black, round shapes with some outlines around them. We will only see a little bit of the eye on the right, and his nose will be round between his eyes.

His mouth is wide, rounded and almost shark-like with rows of sharp teeth then you can use some rounded lines for his large ears and finish off his head outline. Then you can also add some rows of leaves on top of his head. 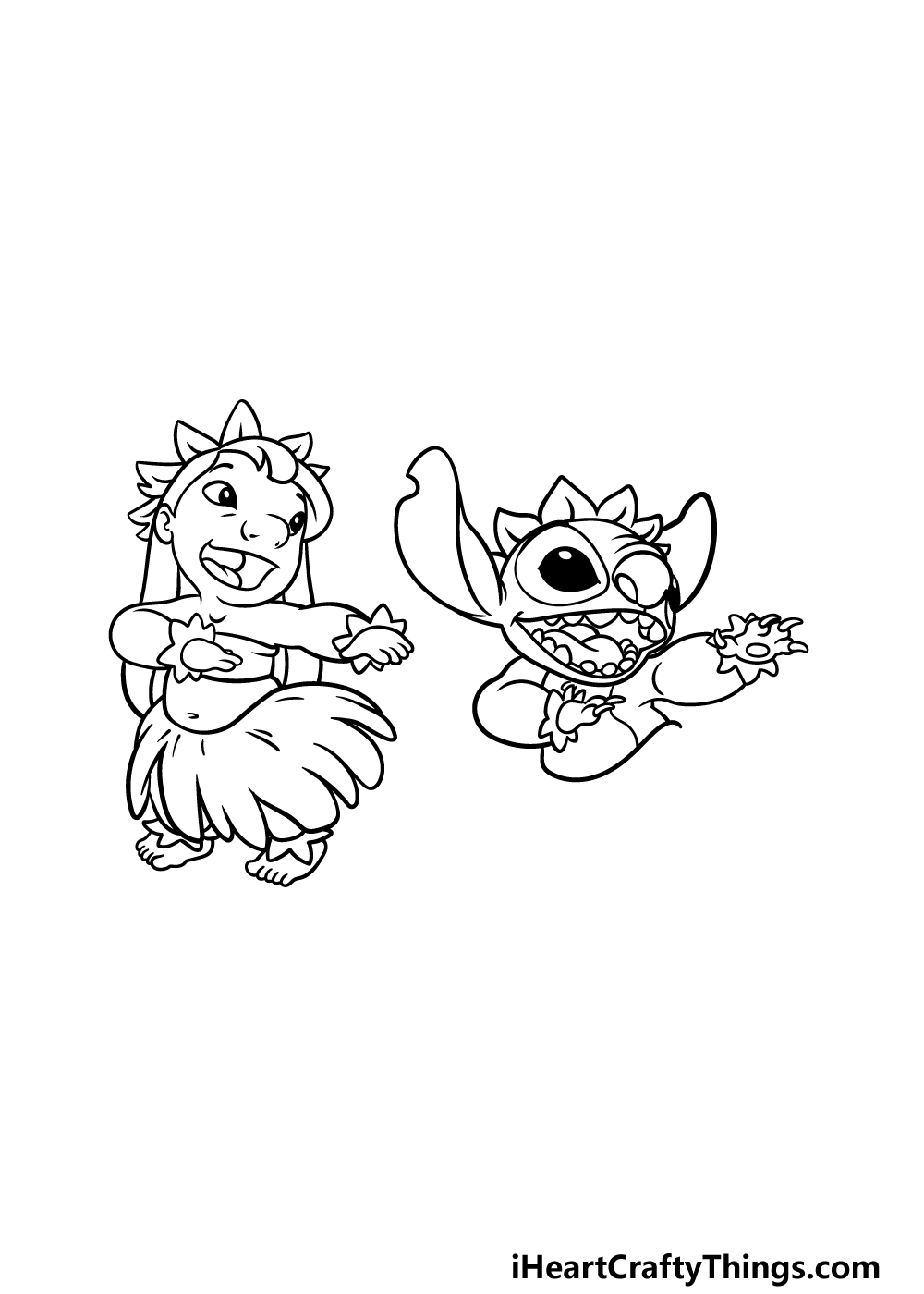 Stitch is also doing a hula dance like Lilo, so we shall start to draw his dancing body in this part of your Lilo And Stitch drawing.

His arms will be posed very similarly to Lilo’s, with the main details being that his arms are thicker and more rounded and he has small little hands with some claws at the end of them.

Once you have drawn his dancing arms, you are ready to draw the last few details and elements in the next step!

Step 5 – Next, draw the final details for Lilo And Stitch 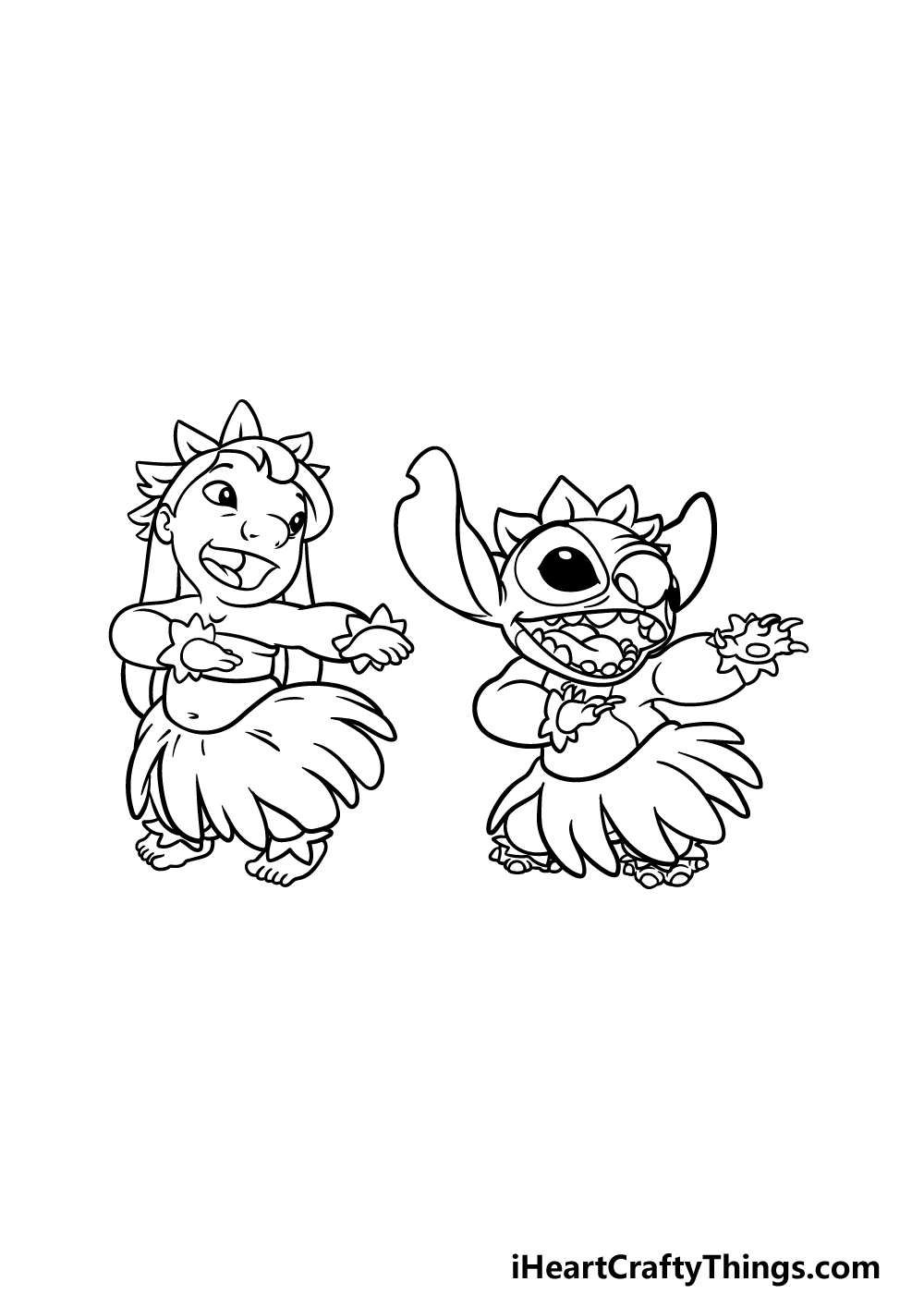 In this fifth step of our guide on how to draw Lilo And Stitch, we will be finishing off Stitch’s bottom half.

You can draw another leaf skirt that is the same as Lilo’s, and then finish off by drawing his feet poking out beneath them.

Once you have drawn this part of his body, you have finished all of the drawing for this picture!

You can also keep the fun going by adding some details and elements of your own to personalize the picture.

Some ideas you could go for would be to draw a background for the picture that is inspired by the film, or you could even draw some more favorite characters from the series!

These are just a few ideas, but there are loads of ways that you could put your own spin on the drawing. 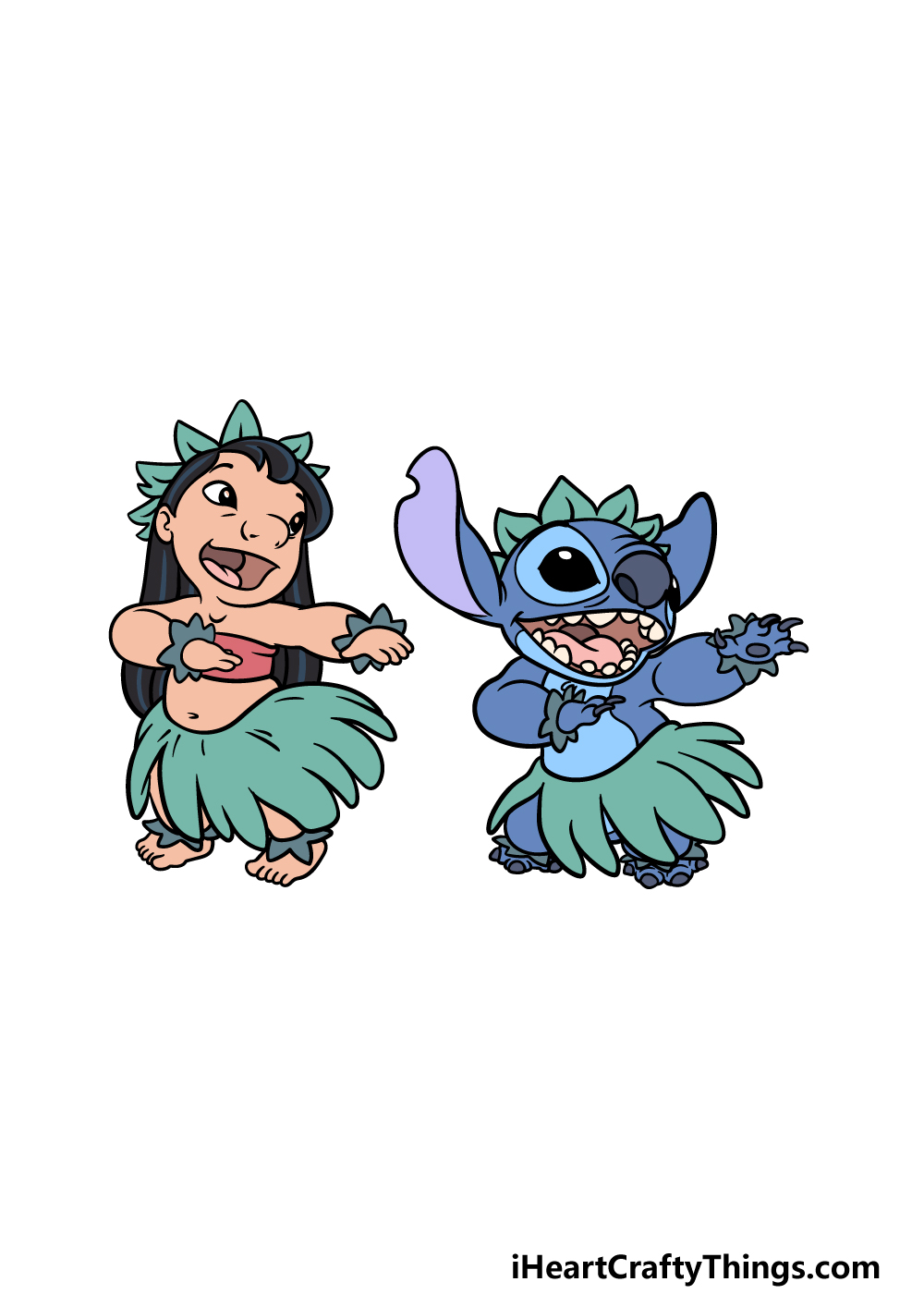 We will finish off this Lilo And Stitch drawing by adding some amazing colors to it. In our reference image, we used greens for the grass skirts and crowns, while going with shades of blues for Stitch’s fur.

You can get different color variations by experimenting with various art mediums and tools.

3 More tips to make your Lilo And Stitch drawing easy!

You will easily draw these beloved characters with these tips for your Lilo and Stitch sketch!

These characters love to perform a Hawaiian dance, and that is what they’re doing in this Lilo and Stitch drawing. This pose is great, but it can also be quite tricky to draw.

While you’re still getting the hang of these characters, you could simplify their pose and their outfits.

For example, you could have Lilo in her usual red dress and draw Stitch without the grass skirt.
That would already make it simpler, but you could also simplify their pose to have them simply standing. These are a few ideas for how to simplify it, but what else could you do?

This next tip for making this easy to draw Lilo and Stitch even easier would be by referring to the various media that portray them. Lilo and Stitch have appeared in countless films, TV shows, video games and books.

If all else fails, you can even look up pictures online to help.

That means that you would have many portrayals to choose from! This tip would go really well with the previous one, as you would be able to draw them in different poses and outfits.

The more sources you can use, the better. Using this extra help will make portraying the details so much easier to do. What are some Lilo and Stitch appearances you could use to help you?

When we see a finished cartoon drawing, it’s hard to imagine that so much planning would have gone into it. With that being said, you could make this Lilo and Stitch sketch so much easier by planning it out!

Even professional animators will do basic sketches with pencils to plan out the pose and proportions of their characters. You could do that as well by getting a light pencil and using basic shapes.

Once they are planned out, you can then add some extra layers of details and erase your planning once it’s done in pen!

Your Lilo And Stitch Drawing is Complete!

We hope that you enjoyed this step-by-step guide on how to draw Lilo And Stitch!

We tried to make it so that this process would be fun and easy for you, and by breaking it down into smaller, more manageable steps we hope we succeeded with that!

Now you can make this drawing even more personalized by adding a background or by drawing characters and elements from the films. What else can you think of to add to this picture to finish it off?

When you have finished off this guide, you can find your next amazing drawing guide on our website. We have tons of tutorials and we add more all the time!

We would love it if you would share your Lilo And Stitch drawing on our Facebook and Pinterest pages for us to enjoy. We can’t wait to see your artwork! 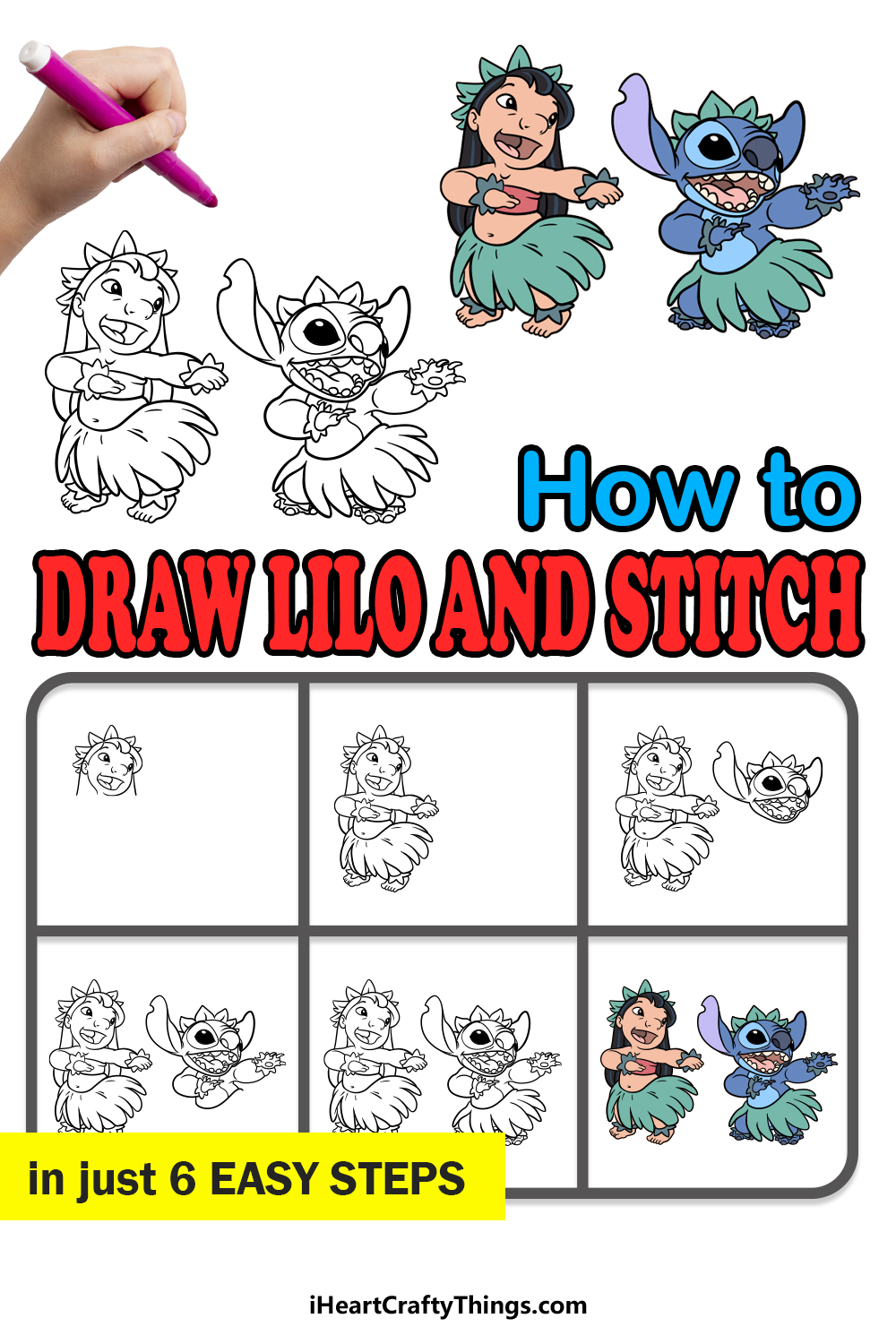 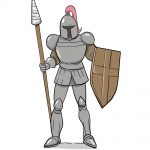 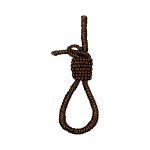