The film Cars is one of the most vibrant and imaginative films that Pixar has put out.

It proved a huge hit with audiences, and was popular enough to gain two sequels along with video game, book and TV show adaptations.

The main character is the bright and colorful Lightning McQueen, who is an arrogant hotshot racing car.

He has many fans both in his films and in the real world, and those fans that have hands instead of wheels often like to learn how to draw Lightning McQueen.

If you are one of these fans, then this is the guide for you!

Our step-by-step guide on how to draw Lightning McQueen will show you how fun and easy it can be. 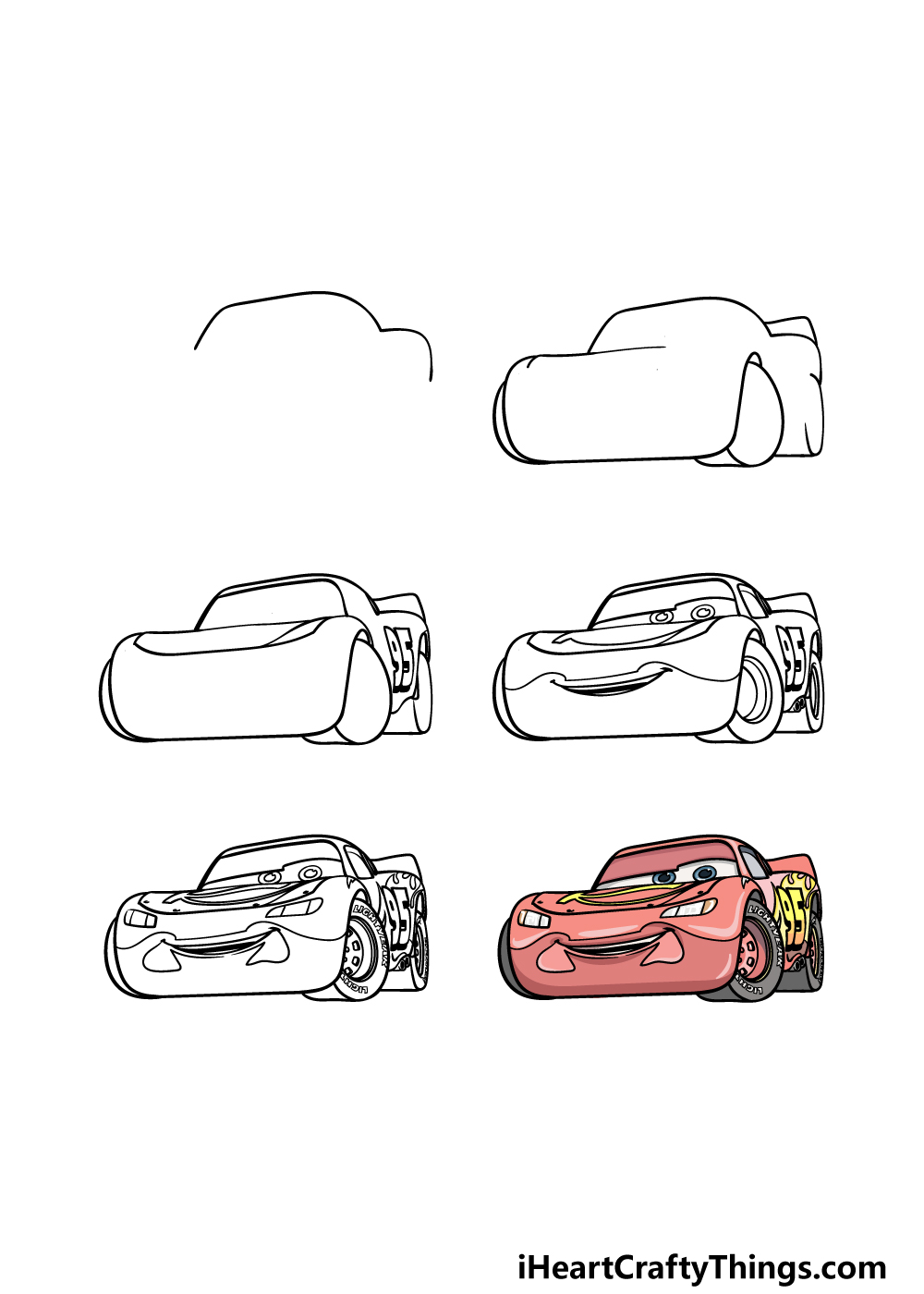 How to Draw Lightning McQueen – Let’s Get Started! 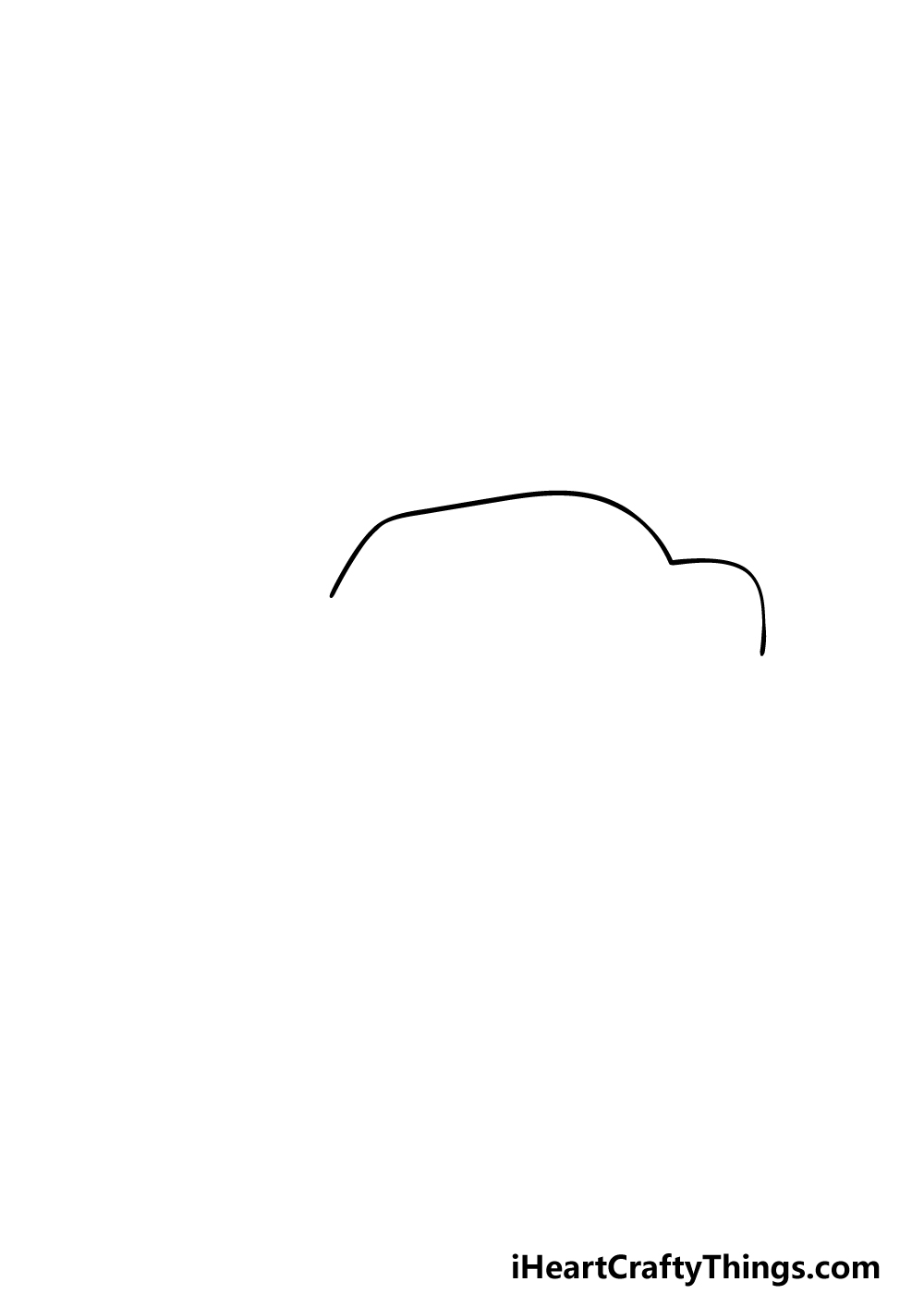 Drawing any kind of car can be a real challenge in the best of times, and just because this is an animated character doesn’t make it any easier!

There’s nothing to fear, however, as we will take it slowly throughout this step-by-step guide on how to draw Lightning McQueen. To begin with, we will draw the top of his body.

You can start with a vertical line that gently curls into a horizontal one that extends to the right. Then, there will be a shorter curved line coming down from that first one.

That will take care of the entire top section of Lightning McQueen, and once you’re ready we can move on to the next part!

Step 2 – Next, draw the rest of the outline 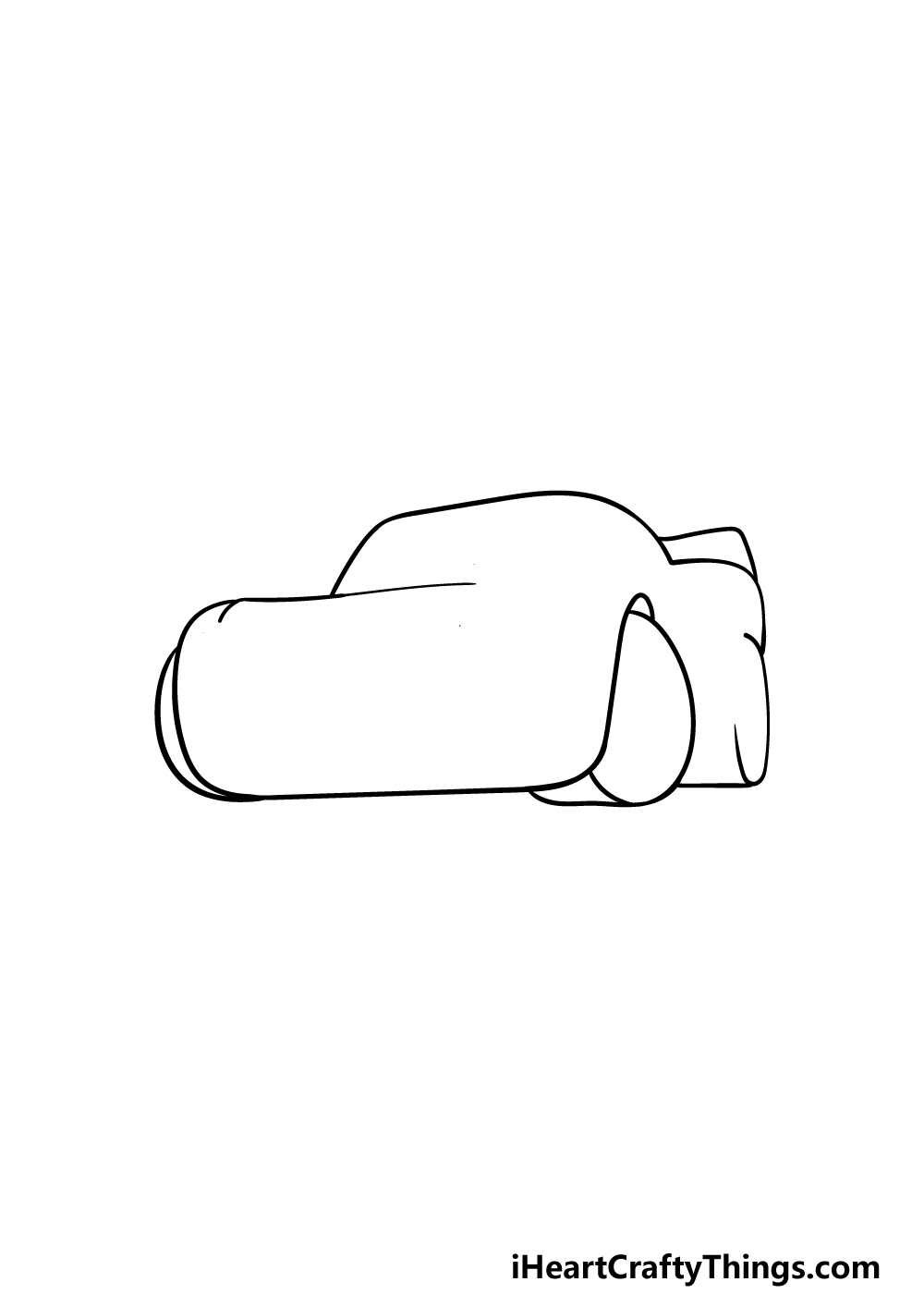 We will be adding quite a lot in this step of your Lightning McQueen drawing, but it’s not as intimidating as it looks!

We will start with the front section of the character, and we will be extending this part from the top of the car.

Start with a horizontal line underneath the line at the left side of the car’s top from the prior step.

This will curve down and under into another horizontal line, and then you can draw a circular shape for the first car tire. You will see a small part of the tire on the left side as well. 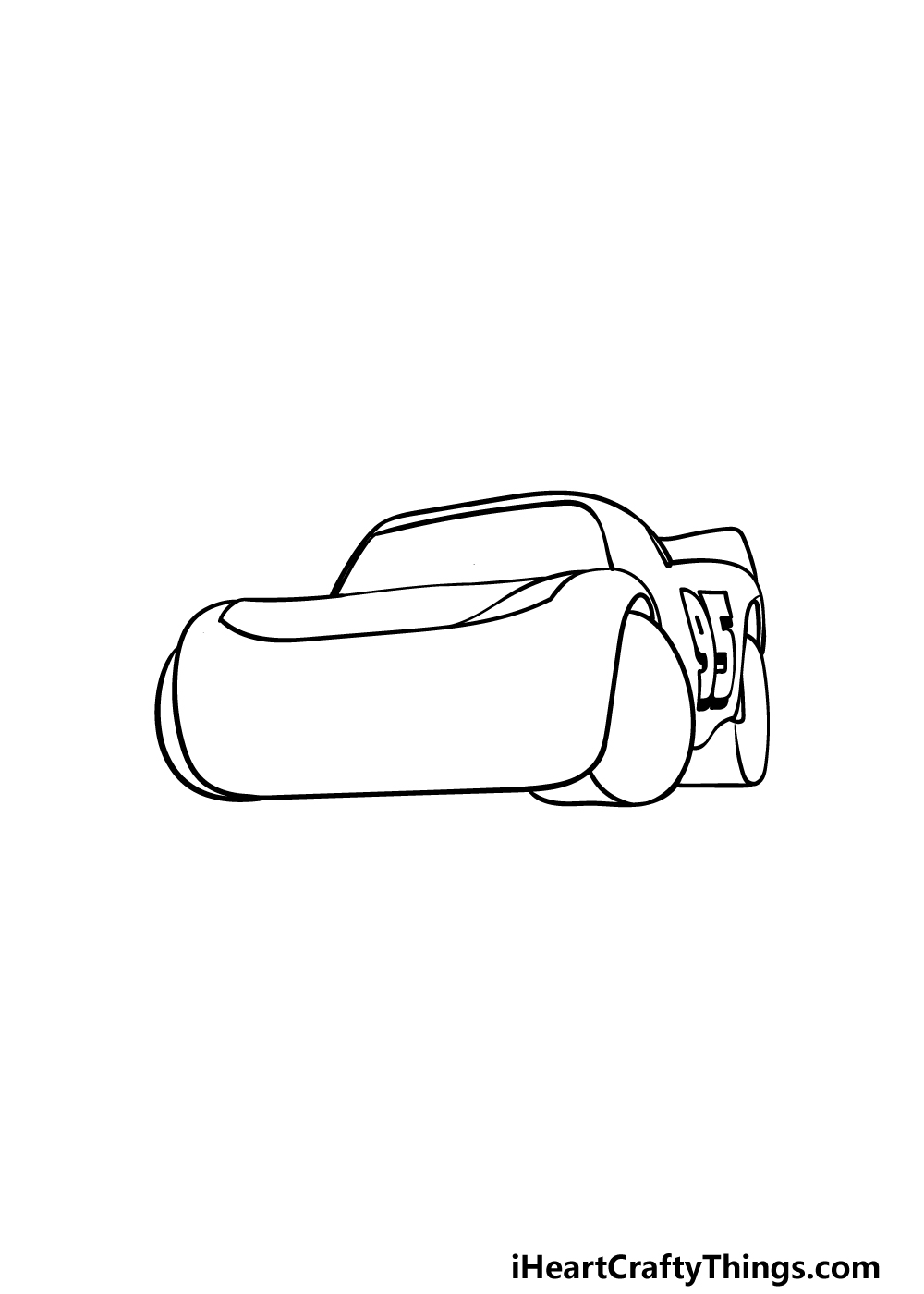 You have most of the general outline for this drawing done, so for the next few steps of this guide on how to draw Lightning McQueen we will be working on adding some inner details for him.

Start by using a curved line for the top of the bumper, filling in the space between the lines.

You can then use another curved line near the top of the front of Lightning for the windshield along with some smaller details. Finally for this step, you can draw a large number 95 on the side of the car door. 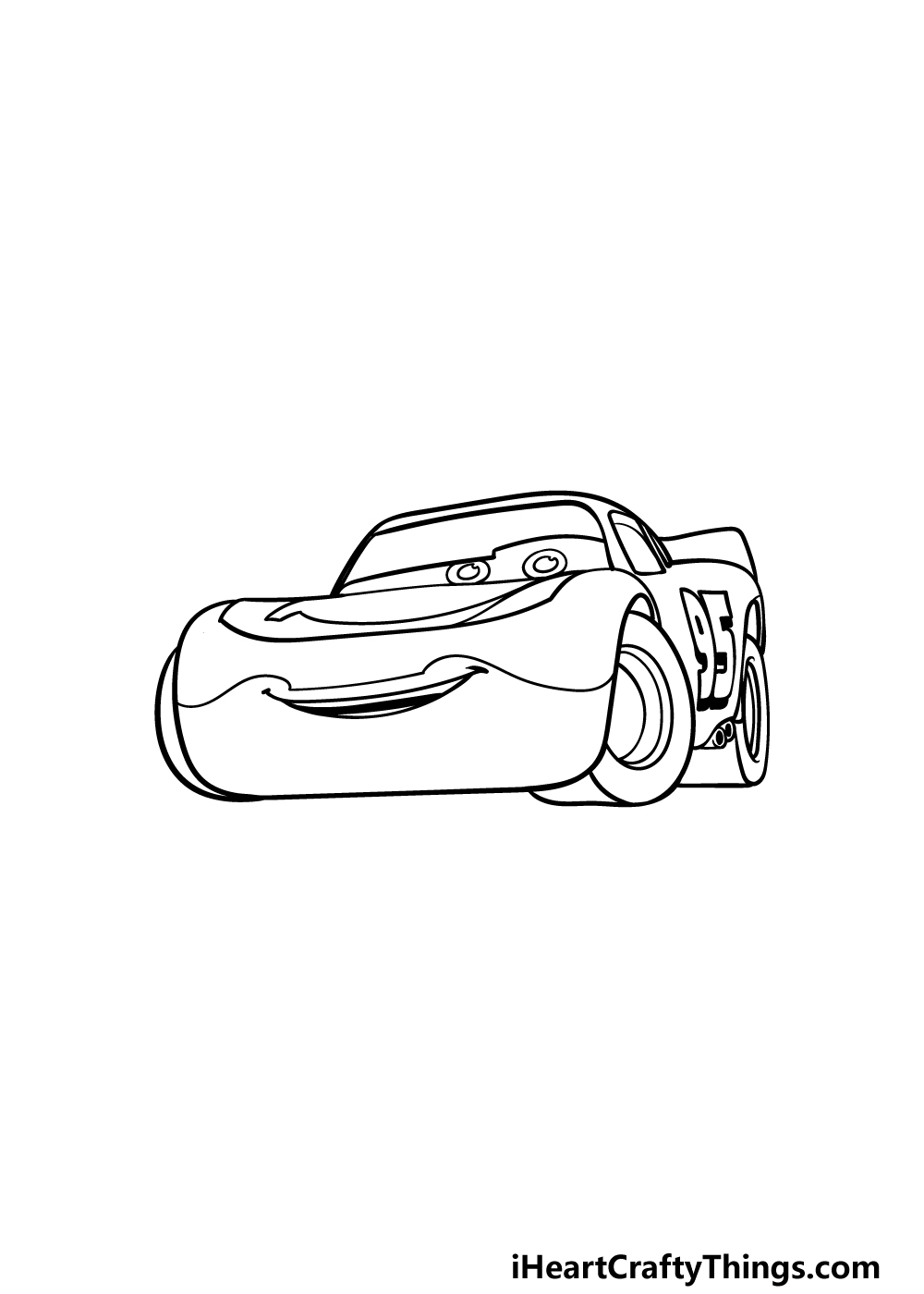 We will be adding even more details to your Lightning McQueen drawing in this step. First, use some more curved horizontal lines inside his windshield to give his eyes some expression.

Then, we shall draw some circles inside of his eyes for his pupils. We will also be drawing his smiling mouth under his bumper, and you can color it in with some black.

Finally, draw some circular shapes inside the wheels for the rims of the car, and then draw some small exhaust pipes on the side.

Then you will be ready for some final details in the next step of the guide! 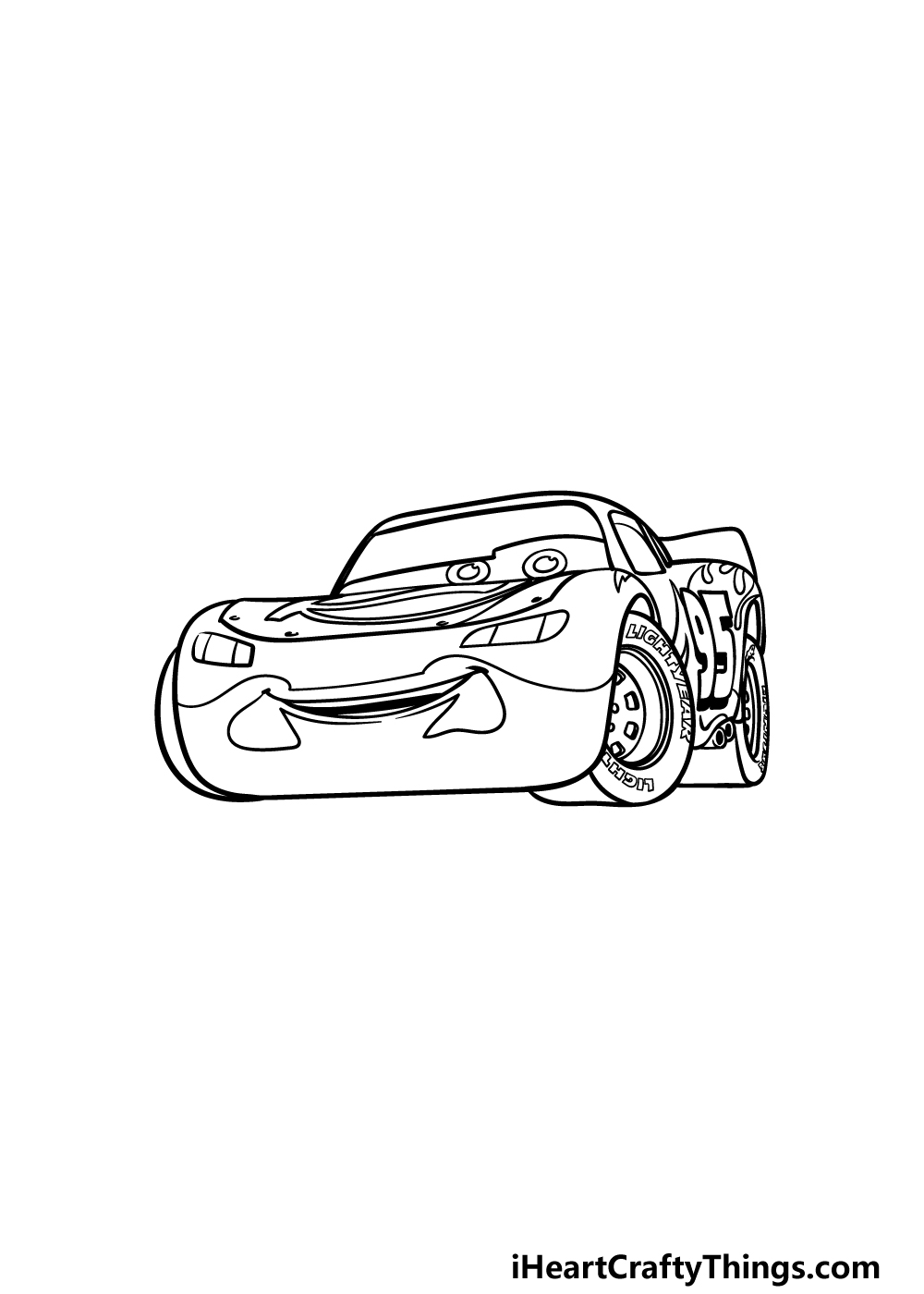 This fifth step of our guide on how to draw Lightning McQueen will be all about finishing off with some final details and touches.

For the wheels, you can draw the Lightyear branding using some small blocky letters on them. Then, some small square shapes can be added inside of the rim.

The remaining details we have to add will be small yet effective! First, you can draw some flame decals around the 95 on his side.

Then, we will draw some rounded rectangle shapes for his headlights. These along with some smaller details throughout the drawing will finish him off.

You could also add some elements of your own to really finish him off as well! Perhaps you could draw a background, or even add some more characters from the film to go along with him. What else can you think of to finish off this Lightning McQueen drawing of yours?

Step 6 – Finish off your Lightning McQueen drawing with some color 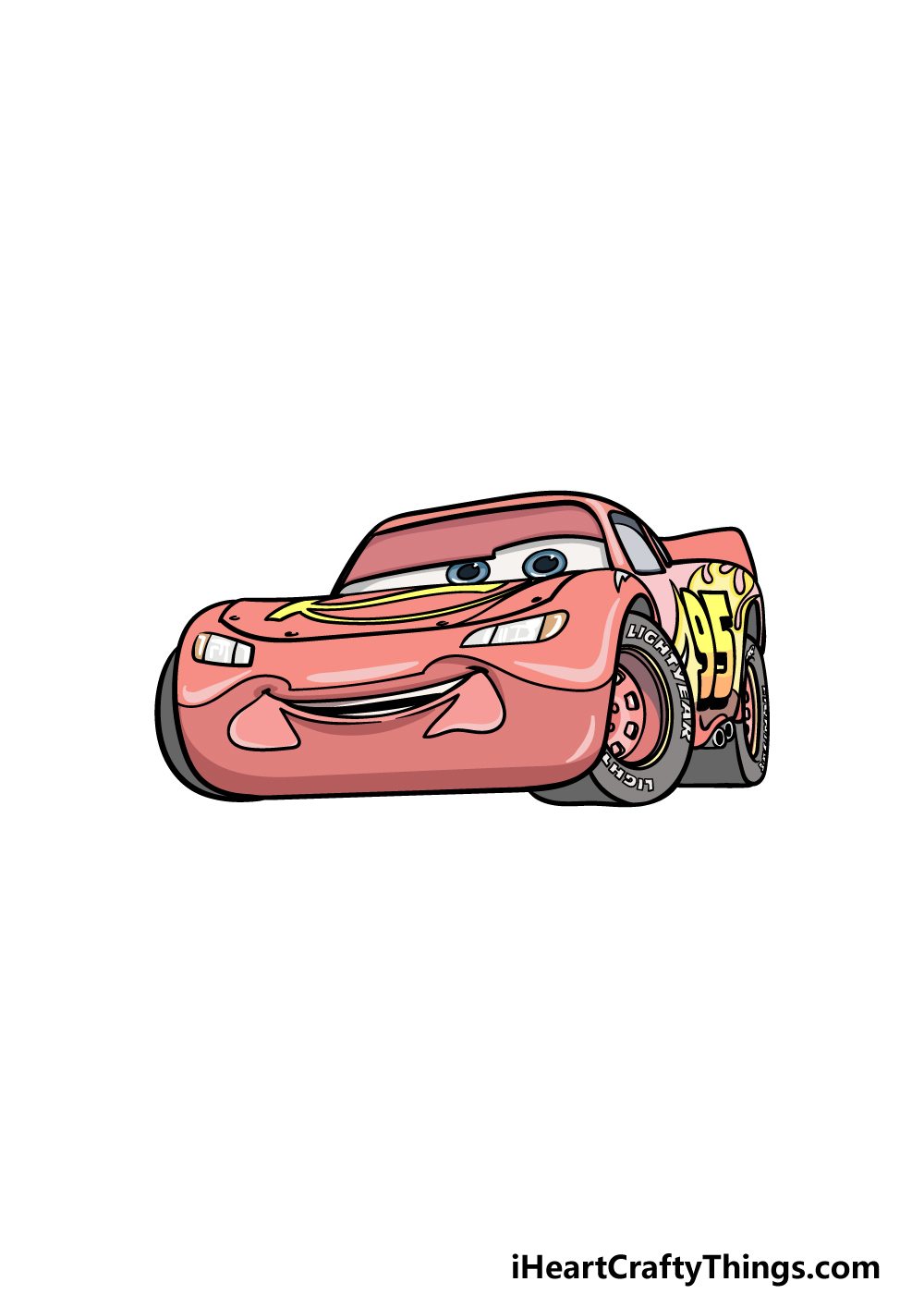 Now we can finish off your Lightning McQueen drawing with some amazing colors! Lightning’s main color is bright red, and there are some yellow highlights for the decals on his side.

There is also some blue incorporated into his eye design, and we stuck with all of these classic colors in our reference image.

If you would like to replicate his vibrant look from the films, then you could use mediums such as acrylic paints and colored markers to really make the colors pop.

The colors and mediums you use are ultimately up to you, so have fun getting creative as you finish off this picture!

Race into action as we make your Lightning Mcqueen sketch look even cooler!

In the films, Lightning Mcqueen is known for his smart mouth, and that means he has many memorable quotes and lines.

You could show some of your favorites by adding them to this drawing of Lightning Mcqueen!

It could be a line, a quote or any other memorable bit of text from the films. Then, you could choose a fun font to use as you draw them around Lightning Mcqueen.

This would be a fun way to turn this drawing into a poster, too! Do you have some Lightning Mcqueen lines you could use?

The Cars films are filled with many famous and memorable characters other than Lightning Mcqueen himself. Now that you have drawn him, you could add some more of these characters!

There are so many to choose from, but you’re sure to have a few favorites. Once you have chosen your characters, you could look up pictures or use the films themselves to help you to draw them.

Which characters would you like to add to your artwork?

This Lightning Mcqueen drawing shows him as he appears in the films, but you could shake things up with a different style once you have the hang of this drawing.

For example, you could try out a simplified cartoon style to give the drawing a different feeling. Or, you could show what it would look like if Lightning Mcqueen were a proper realistic car.

What are some art styles you could use for the drawing?

Finally, no matter which of our previous tips you did or did not use, you could finish off your Lightning Mcqueen sketch with a background.

Lightning Mcqueen is most at home on the race track, so that would be a perfect setting for this drawing. You could also draw him in a more relaxed environment or recreate your favorite moments from the movies.

Once again, you could use the movies for inspiration!

Your Lightning McQueen Drawing is Complete!

That will conclude all six steps of this guide on how to draw Lightning McQueen! As we mentioned, drawing cars of any kind can be a bit tricky.

That’s why in this guide we aimed to make it fun and easy for you to take on, so that there would be no frustration.

Hopefully we succeeded in this regard for you!

Now you can finish it off with some of your own creative additions and touches. We went over just a few of the ways that you could go about doing this, but this is your chance to show off how creative you can be!

When you’re finished with this guide, you’ll want to check out our website. We have tons of drawing guides for you there, and we upload new ones all the time. 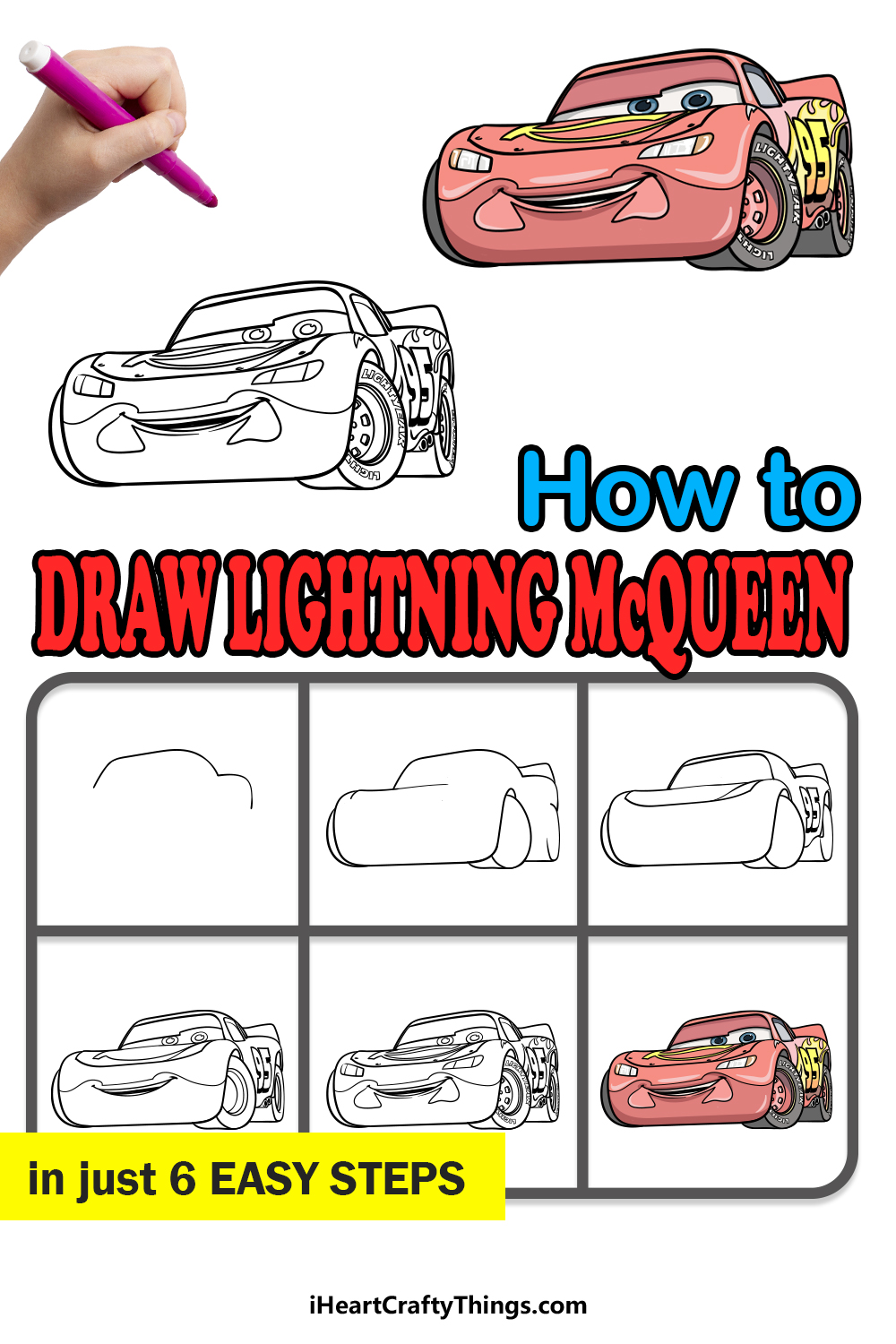 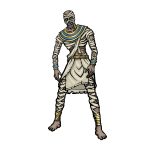 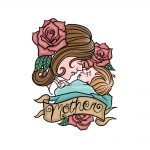