Who Framed Roger Rabbit is one of the most innovative and influential animated films ever made.

It combined real actors interacting with cartoon characters in an organic way, and was one of the first films to achieve it on such a scale.

One of the most famous characters from the film is the vivacious Jessica Rabbit, who has become somewhat of an icon. Learning how to draw Jessica Rabbit can be quite a task due to her detailed design.

Luckily, when you know what to do it can be made much easier!

Our step-by-step guide on how to draw Jessica Rabbit will make recreating this classic character not only much easier but also more fun. 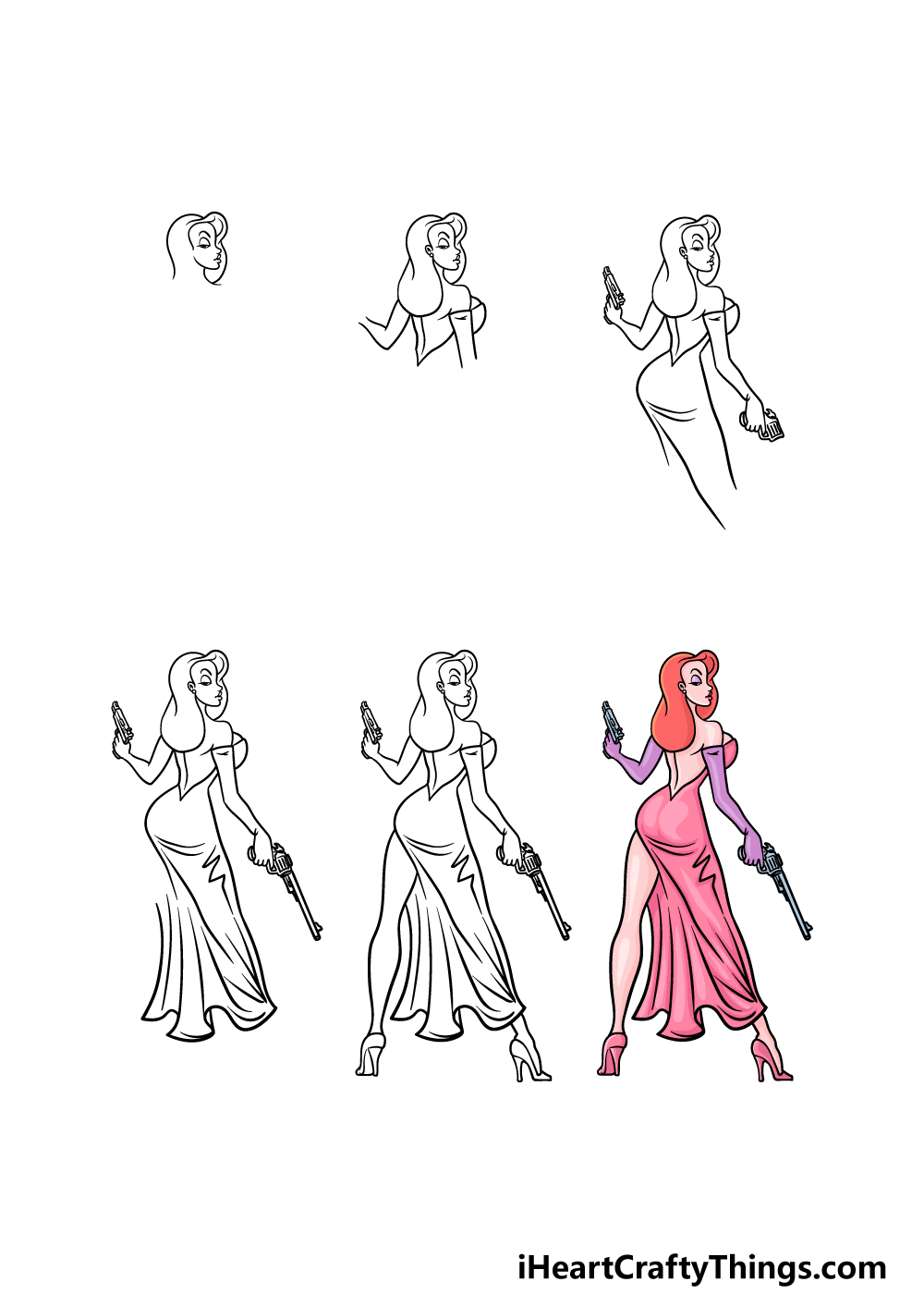 How to Draw Jessica Rabbit – Let’s Get Started! 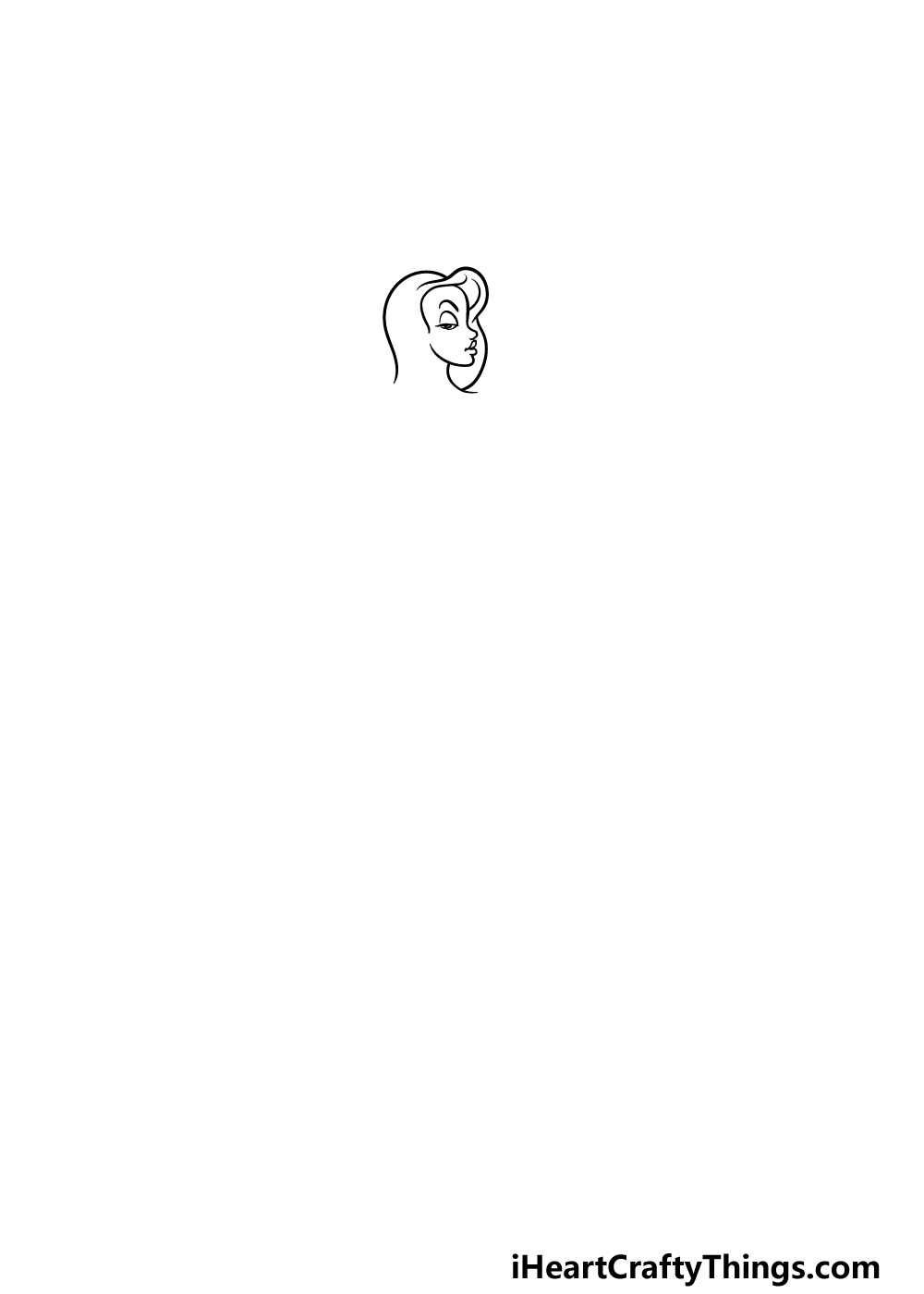 In this first step of our guide on how to draw Jessica Rabbit, we will be starting with her head and her hair.

We will be using some curved lines to create the profile of her turned face, as shown in our reference image.

Her eyes will also be mostly closed, and have a rounded shape for her eyelid in order to give her a more intense expression.

Once you have drawn her face and neck outline along with her eyes and mouth, you can then draw her hair.

She has a rather specific hairstyle, and it can be drawn with some more rounded lines to create some wavy shapes. There will be a large space at the bottom of it, but we will be filling that in soon.

Step 2 – Next, draw some more of her hair and body 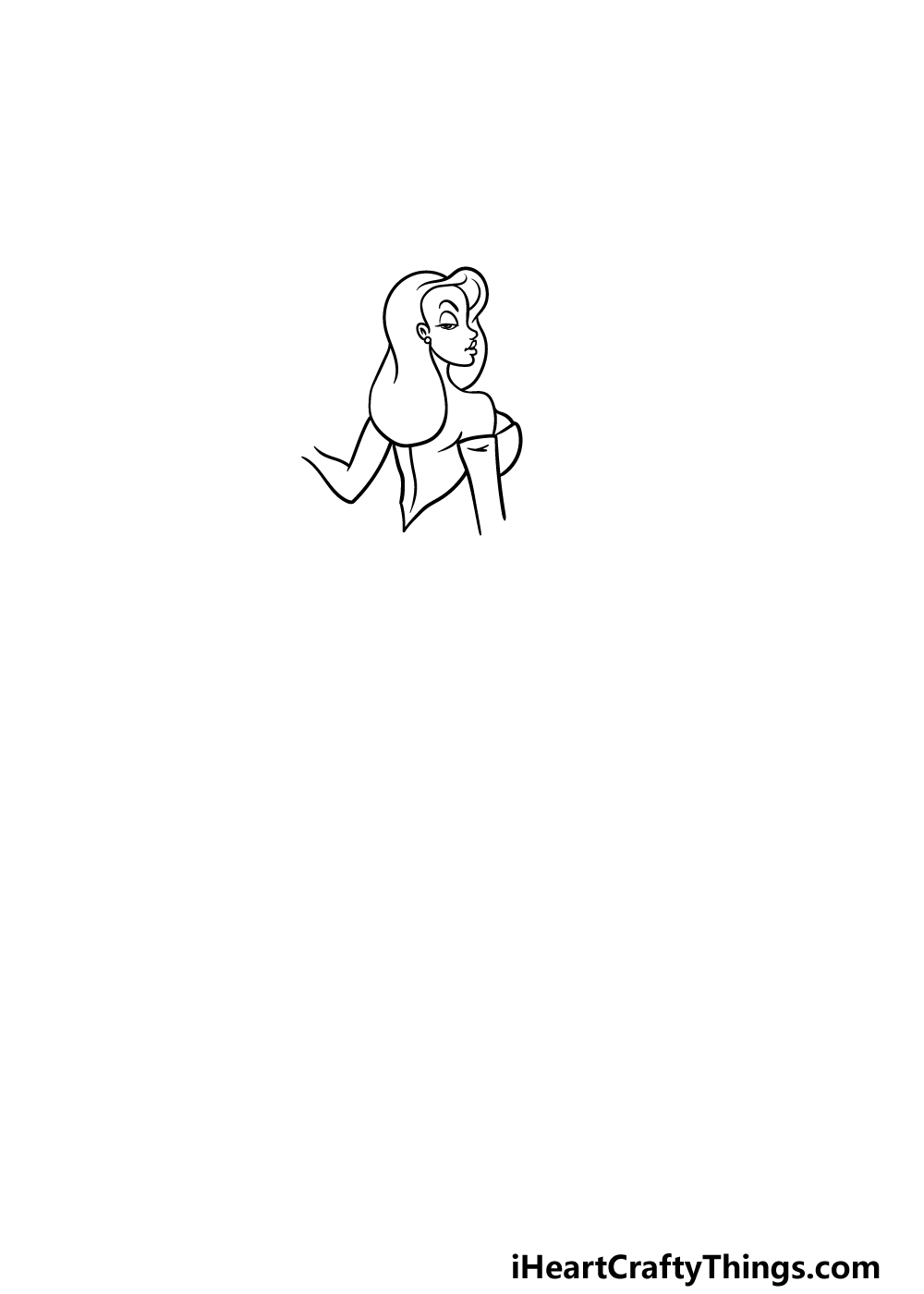 Now that you have the face and hair for your Jessica Rabbit drawing completed, we can now start to draw more of her hairstyle and start her body as well. First, use another rounded line for the bottom of her hair dropping over her back.

Then we can start drawing her body. With the way that she is standing, her back will mostly be facing us as the viewer. First, draw her shoulder near the base of her hair.

Then we will be using some slightly curved lines for the opening of the back of her dress. We will also start drawing the long gloves she is wearing, and then we can draw her chest as well.

Step 3 – Now, draw some more of her body and accessories 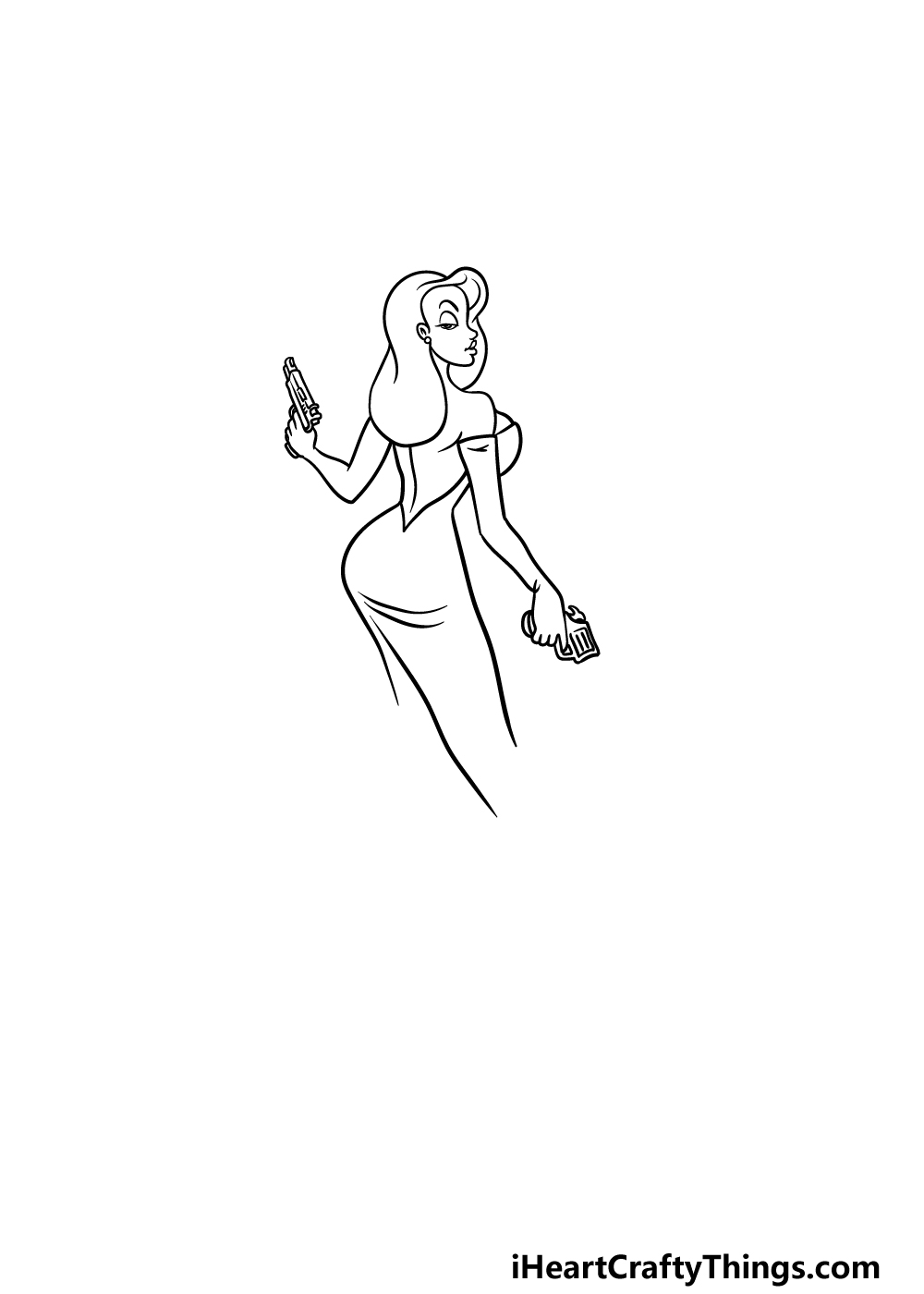 The pose and setting that we have chosen to depict in this guide on how to draw Jessica Rabbit shows that she is not kidding around!

She will be holding two guns in this image, and we will start drawing them now. Before you do that, first use some more rounded lines for the rest of the dress that she is wearing. There will still be some empty spaces at the bottom of it, though.

Then we will finish off her hands, the first of which will be holding a small pistol on the left. She will be holding a much larger gun in her right hand, but we will only be drawing the start of that gun for now.

Step 4 – Next, finish off the gun and add to her dress 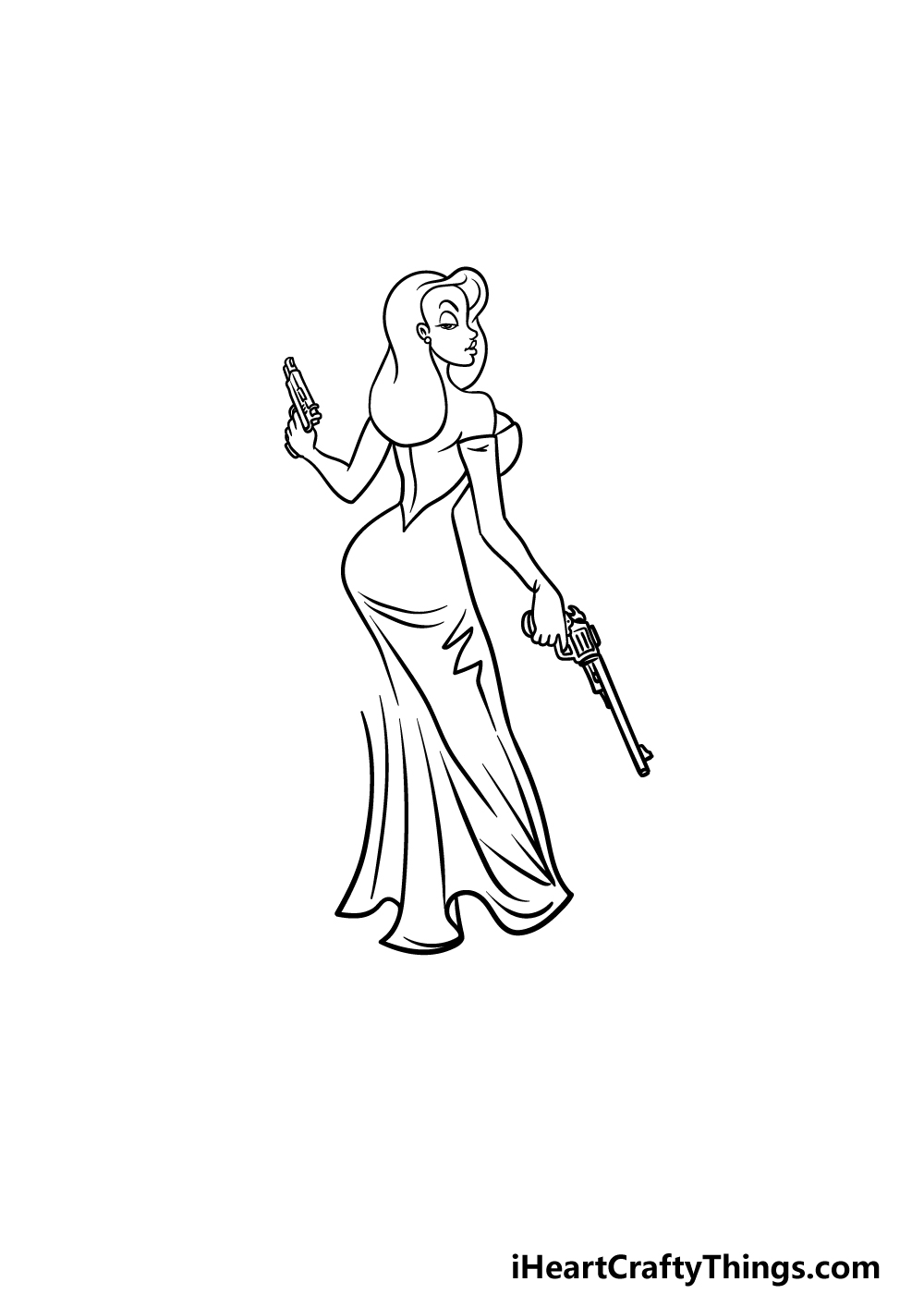 Now we will be finishing off the gun that you started in the previous step of your Jessica Rabbit drawing. You can do this by using some straight lines for the barrel of the gun.

Then, we will be using a lot more curved lines to create the flowy bottom of the dress that she is wearing. 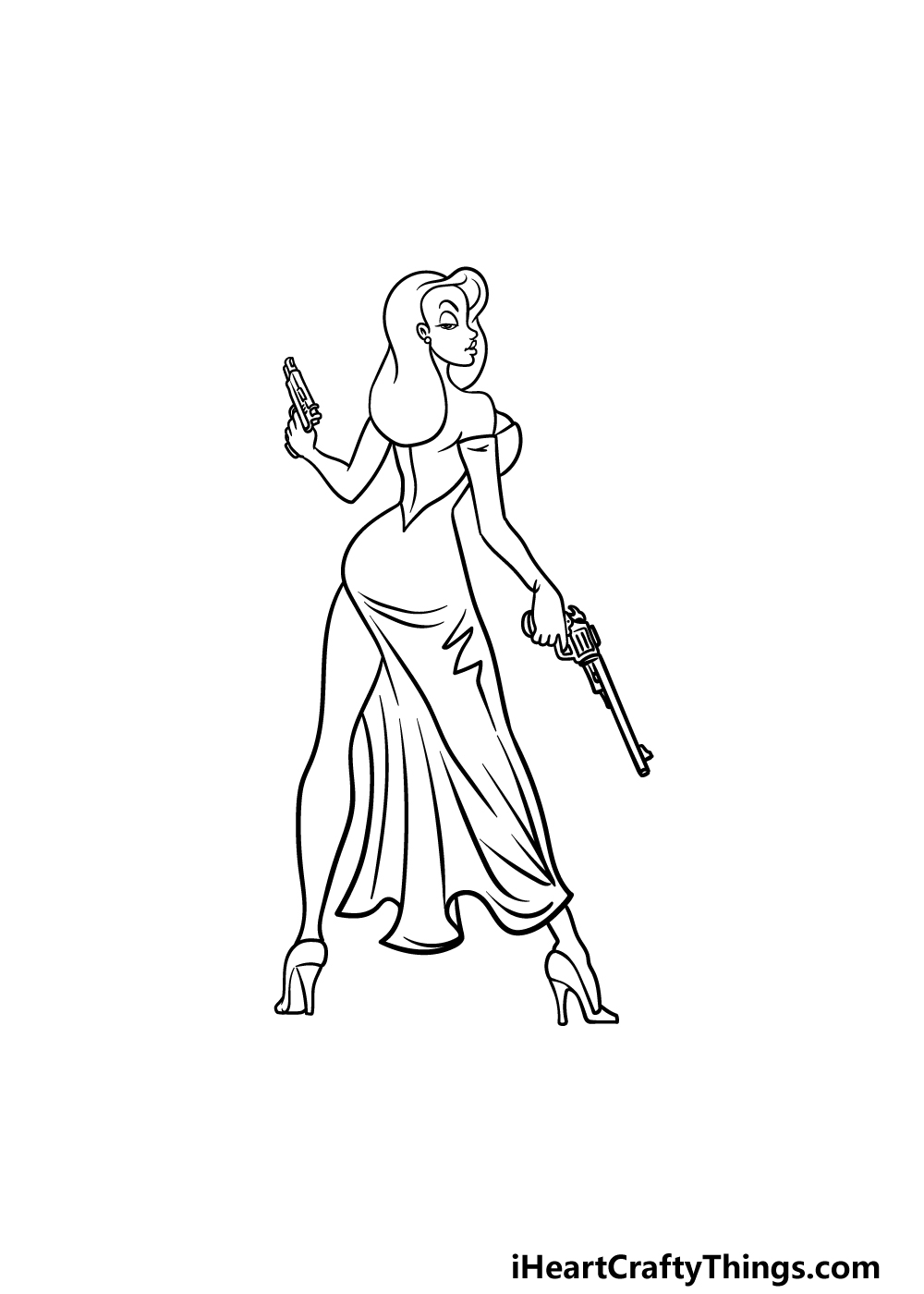 For the fifth step of this guide on how to draw Jessica Rabbit, we will be finishing off the final details in preparation for the final step.

To do this, we will be drawing her legs to finish off the pose she is in. With the way that she is standing, we will see most of the leg on the left, and you can draw it using some wavy lines like the ones in the reference image. Don’t forget to add the high heel shoe she is wearing!

We will see much less of the leg on the right, and you will pretty much just be drawing her ankle and foot poking out from the bottom of her dress.

Once her legs are drawn, you could also add some extra details and elements of your own!

Maybe you could draw a background to recreate a scene from the film or draw some more characters to go with her! What can you think of to finish off this picture?

Step 6 – Finish off your Jessica Rabbit drawing with some color 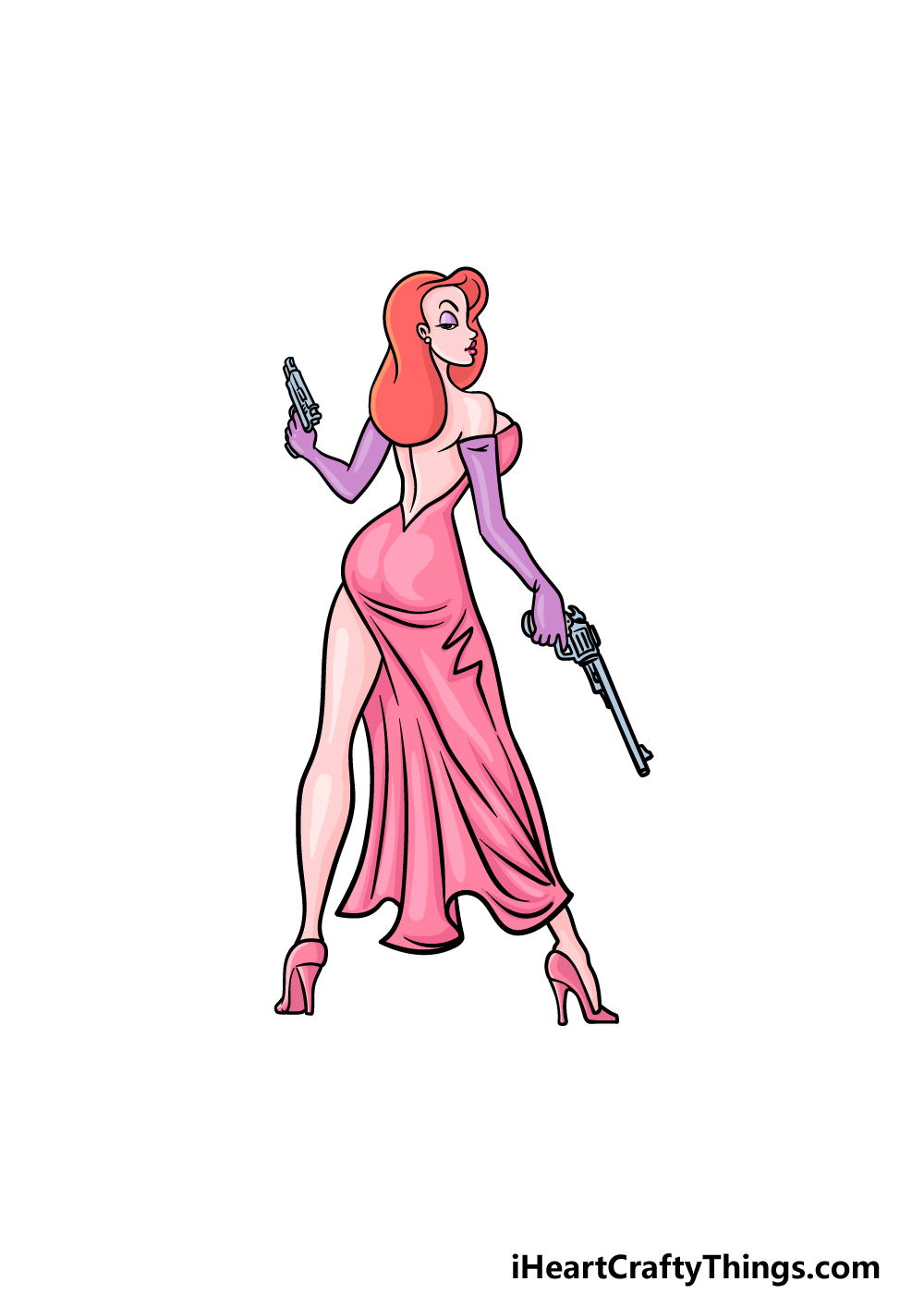 This character is well known for sporting a bright and rich color style, and that is what we went with in this final part of this Jessica Rabbit drawing.

We stuck with her usual color scheme of reds and pinks to keep her looking screen accurate.

You could use various art tools and mediums to color her in, and you could even incorporate some crafts.

She’s often seen wearing a sparkly dress, so maybe you could incorporate some red glitter accents for her dress!

What will you use to color in Jessica Rabbit to finish off this drawing?

5 Tips To Make Your Jessica Rabbit Drawing Even Better!

Create a stunning Jessica Rabbit sketch with these 5 fun tips!

For this Jessica Rabbit drawing, we have her posed with a couple of guns. This is a really cool look for her, but you could give her some different accessories!

For instance, she is shown singing in the Who Framed Roger Rabbit film. You could remove the guns and have her pose with a microphone instead for one idea.

What other accessories can you think of that you could use?

Once you have the hang of this drawing of Jessica Rabbit, you could also change her pose a bit. This would be a great way to portray her in different scenarios!

It could be as simple as her arms being shown in a different position, or you could change her pose entirely. What kinds of poses would you like to create?

The film is filled with many imaginative and iconic characters, and you could add some of them to your Jessica Rabbit sketch. There are tons of cartoon characters featured in the movie that you could use.

Perhaps the most obvious would be to use Roger Rabbit himself! That’s one idea, but what other characters from the film could you include?

Next, you could really make your drawing even better by adding a background. This would also be a great way to show off your favorite scenes from the film!

There are lots of locations featured, and you could use any of them to great effect. If you want to try this, you can use the movie itself or look up some still images online.

This tip would go well with some of the previous tips!

In the guide, we covered some colors you can use for this Jessica Rabbit drawing. You can take it even further by using certain crafts and special art mediums!

For instance, in the film Jessica Rabbit is shown wearing a sparkly dress. You could use some glitter or glitter glue on this picture to make her dress have some actual sparkle

Your Jessica Rabbit Drawing is Complete!

We hope that you enjoyed creating some artwork featuring this iconic character in this guide on how to draw Jessica Rabbit!

Characters such as this are usually surprisingly difficult to draw, so this guide was created to make it as easy and as fun as possible.

We also went over a few ways that you could take this drawing even further, such as adding a background or some characters from the film.

These along with using some great colors and mediums are a great way to put your own spin on it, so how will you finish off this drawing?

When you’re ready to find your next drawing challenge, you should check out our website for more incredible guides like this one. We have plenty more on the way, so we hope to see you there often! 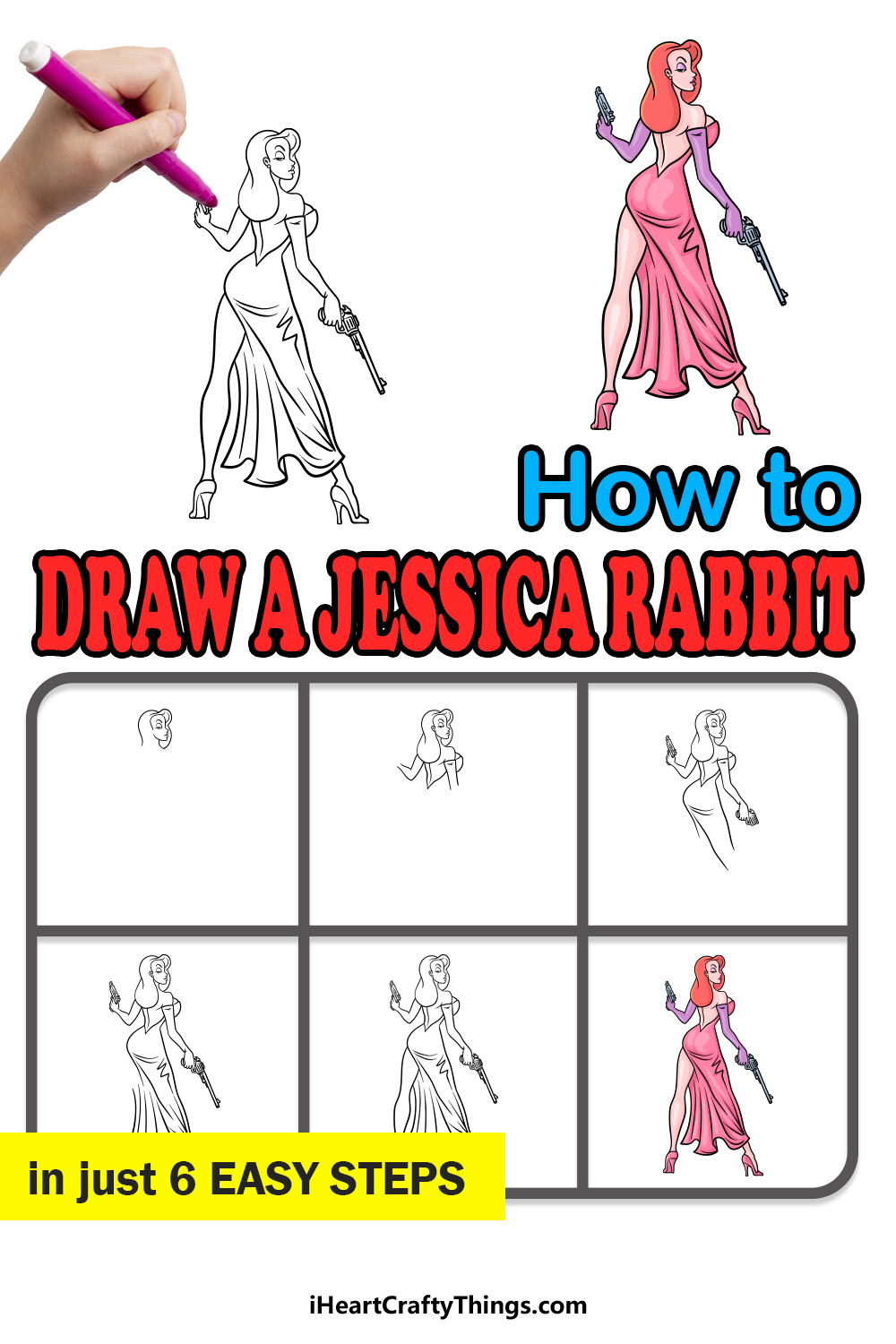 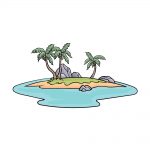 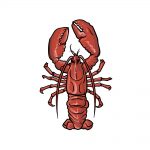