Jellyfish are made up of smooth, jelly bell-shaped bodies and long tentacles equipped with stinging cells.

Here’s a fun fact about jellyfish: did you know that jellyfish aren’t classified as fish? They are actually vertebrates that live underwater.

The jellyfish is often distinguished for its luminous, transparent skin and unique appearance, making it an appealing subject to draw.

However, because of its complex and intricate features, it can be challenging to perfectly capture the beauty of a jellyfish into paper. 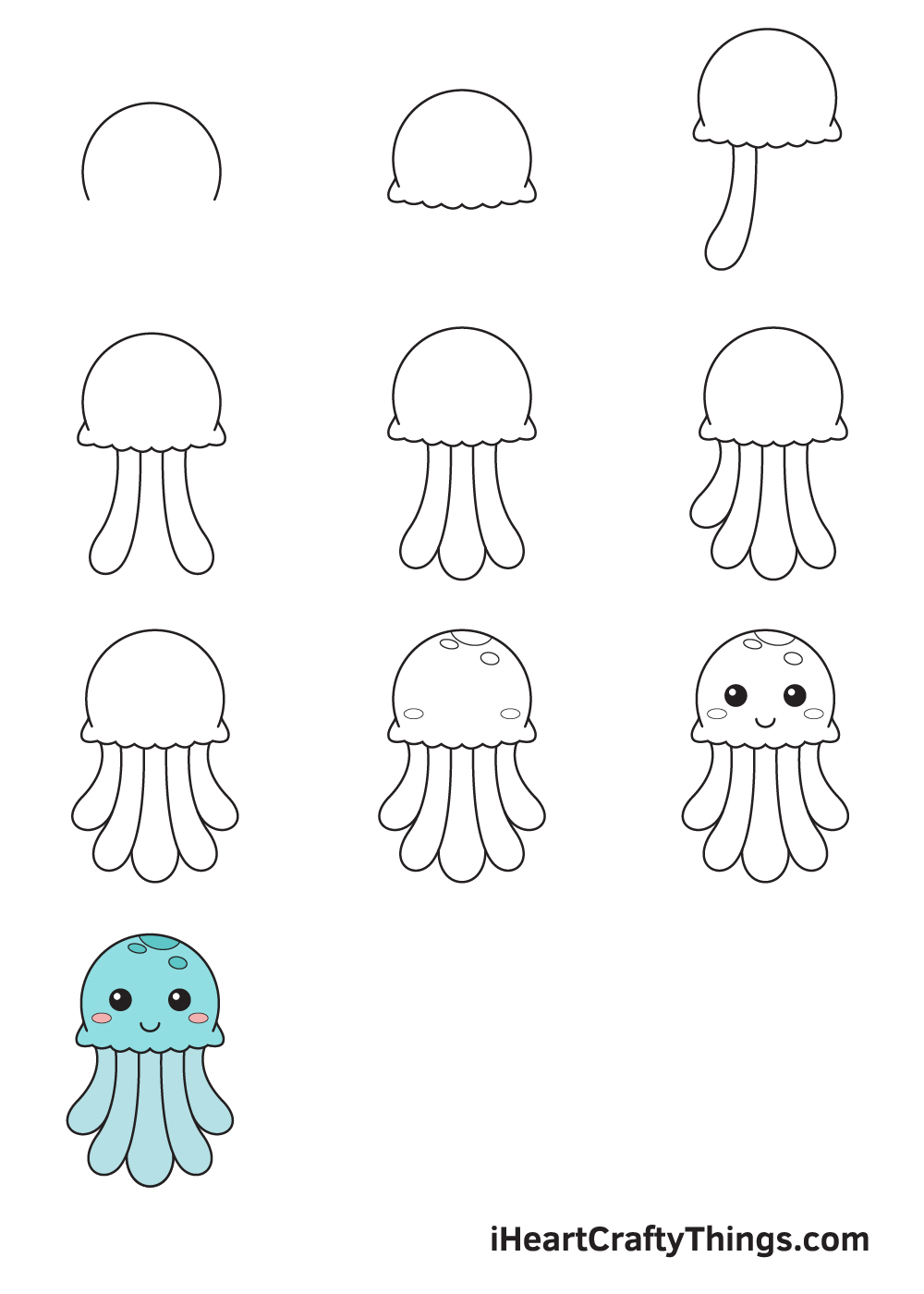 Fortunately, we have curated a step-by-step tutorial on how to draw a jellyfish in a nutshell. This tutorial consists of 9 easy and simple steps.

What’s more, each step is accompanied with elaborate illustrations that serve as your visual guide, making drawing a jellyfish a lot easier!

Here are my RECOMMENDED Art Supplies!

Have fun drawing a spectacular jellyfish!

How to Draw a Jellyfish — Let’s get started!

Starting on the upper portion of your paper, draw a downward curved shape to outline the hood of your jellyfish.

When drawn correctly, it should look like a three-quarters of a circle shape, as shown in the illustration.

Drawing this shape freehand can be quite difficult, so don’t hesitate to use a compass to help you in perfecting the outline.

A compass is a drawing tool that assists you in drawing a perfect circle quickly and easily. When using a compass, simply draw a circle and erase the quarter bottom line.

Step 2 — Outline the Bell Shape Body of a Jellyfish

Complete the body of the jellyfish by drawing multiple connected curved lines below the hood outline we drew in the previous step.

After finishing this step, the outline of your jellyfish’s body should now be closed off, making it whole and complete.

Step 3 — Draw One of Your Jellyfish’s Tentacles

Draw the first tentacle underneath the body of your jellyfish.

We think the tip of the tentacle looks best when it’s rounded, as shown in the illustration. However, you can also make it pointed if you like!

Repeat the previous step on the opposite side to create the second tentacle of your jellyfish.

Make sure to leave a gap in between the two tentacles to create enough space for the tentacle in the middle, which is what we will be drawing in the next step.

Step 5 — Next, Draw Another Tentacle in the Middle

In order to create the tentacle in between the first two tentacles we drew in the previous steps, simply draw an upward curved line at the bottom, converging with the lines of the other two tentacles.

Because of the two tentacles on both sides, it makes sense that only the tip of the middle tentacle is visible.

Draw another tentacle on the leftmost side below the jellyfish’s hood to create the fourth tentacle.

Repeat the previous step on the opposite side to create the fifth and the last tentacle.

Once you’ve completed this step, all the tentacles of your jellyfish should now be complete!

Step 8 — Add Patterns on the Surface of the Hood

One of the jellyfish’s distinctive features is the circular patterns all over the surface of its body. So, that is exactly what we will be working on in this step.

Draw multiple sideways oval shapes in various sizes all over the jellyfish’s body.

There is no perfect spot on where you should place these patterns, so feel free to draw them anywhere you like as long as they are on the surface of the jellyfish’s hood or body!

Step 9 — Draw the Facial Features of the Jellyfish

Give your jellyfish a happy facial expression by adding a gleaming pair of eyes and a huge grin on its face!

Create the eyes by drawing two circles in the middle of the jellyfish’s face. Afterwards, draw a small circle inside each eye. Then, shade the entire eyes except for the tiny circle inside to make the eyes appear like it is glimmering.

Now, to complete the facial features of your jellyfish, draw an upward curved line below the eyes to create the wide smile.

And there you have it—you have completed drawing a jellyfish. Now, all it’s missing is a dash of vibrant colors to make your jellyfish colorful!

Now that we have successfully drawn an adorable jellyfish, it’s time for the most fun and exciting part, which is picking the colors and coloring your drawing!

This is the part where you can really show off your artistic skills and your ability to mix and match various colors.

Most jellyfish are clear or transparent in color.

Enjoy coloring your drawing and watch as the jellyfish ultimately comes to life!

Your Jellyfish Drawing is Complete!

The jellyfish is a beautiful marine creature! However, it’s daunting to get close to them whenever you’re swimming in the sea mainly because of their stinging powers.

So hopefully, once you learn how to draw a jellyfish with the help of this tutorial, you can appreciate the beauty of a jellyfish up close and personal without the risk of being stinged!

Once you’ve finished drawing and coloring a jellyfish, don’t forget to show off your masterpiece by sharing it on our Facebook page, Pinterest, and other social media platforms.

Don’t be afraid to flaunt your artwork. You’ve worked so hard for it so we’re sure it looks incredible! While you’re at it, make sure to like our Facebook page too!

We are excited to see your colorful jellyfish drawing! 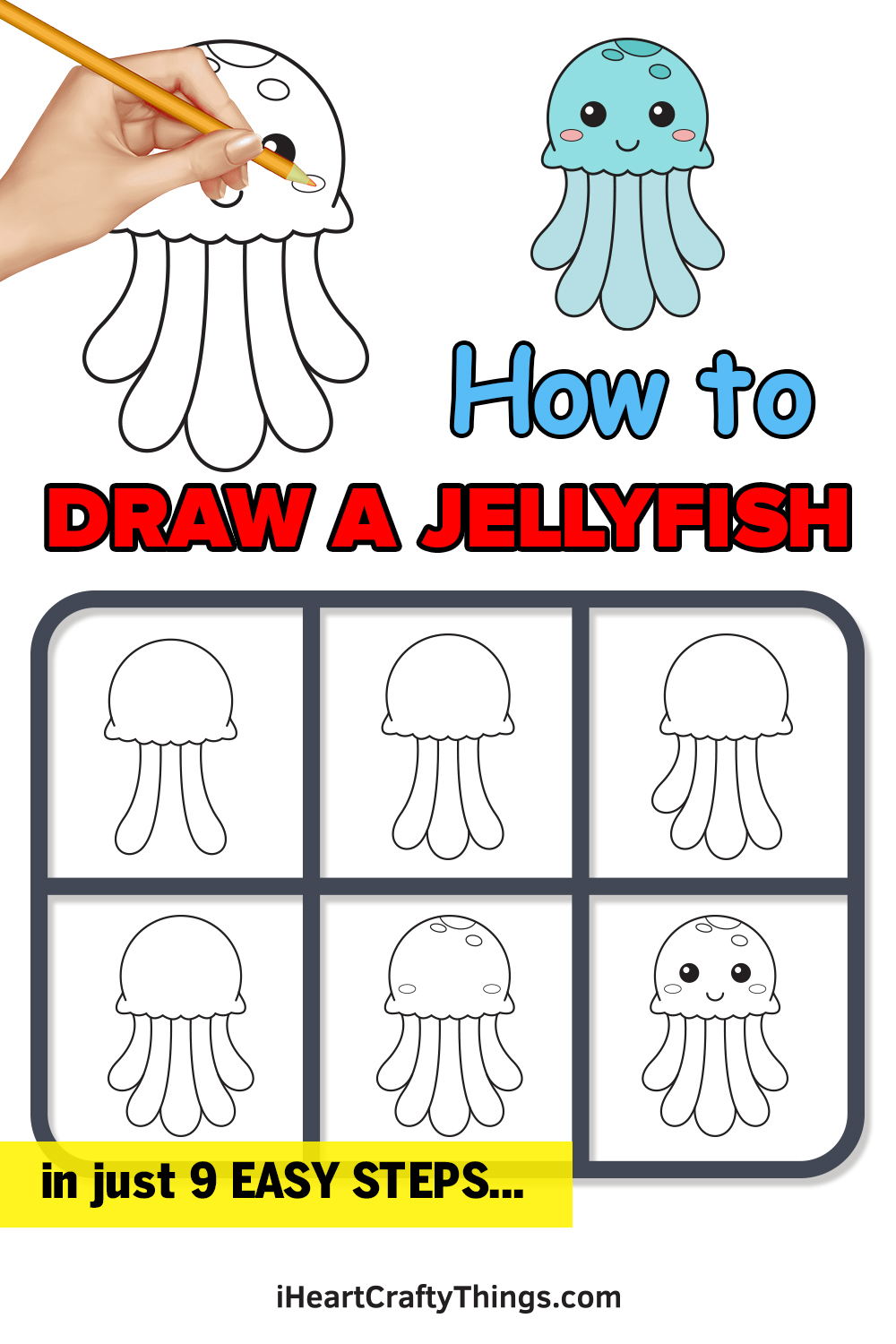