When it comes to superheroes, there are certain characters that pretty much everyone will have at least a passing knowledge of.

In recent years, new characters have come to take on this level of popularity, and Iron Man is a great example.

He was regarded as a lesser-known hero despite being around for many years, but his explosive film debut in 2008 turned him into a household name.

Now many fans of this charismatic hero like to learn how to draw Iron Man to show off their love for the character.

For fans of this awesome hero, this will be a drawing tutorial that is not to be missed!

Our step-by-step guide on how to draw Iron Man in just 6 steps will show you how to create an incredible picture of this vibrant character. 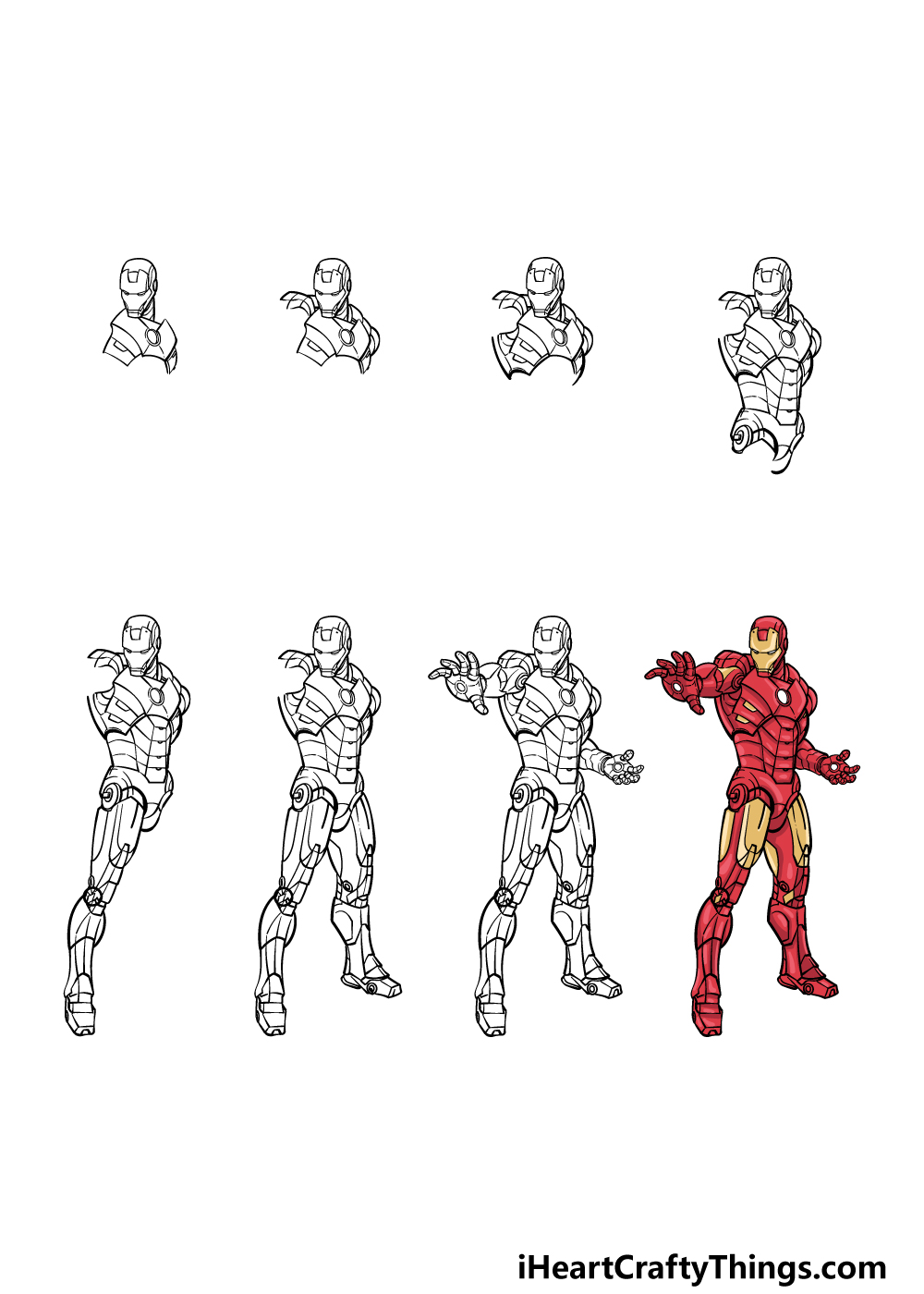 How to Draw Iron Man – Let’s Get Started! 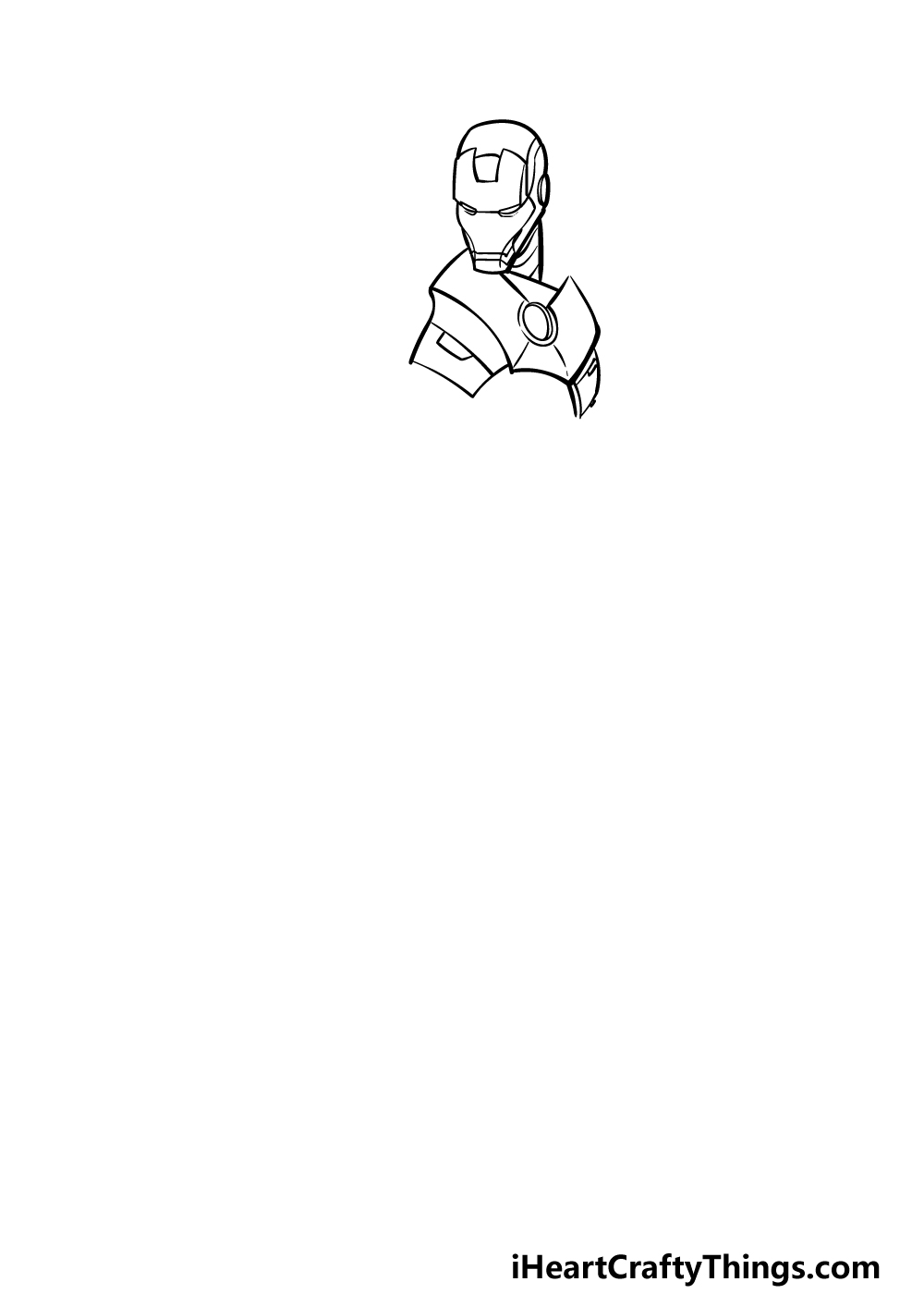 Unlike many superheroes, Iron Man doesn’t have any superpowers to speak of, and he gets things done using his robotic armor developed by his alter ego Tony Stark.

This armor is the coolest aspect of the character, but its detailed design can make it rather tricky to draw. During this guide on how to draw Iron Man, we will be taking things slowly to make it easier.

To start, we will be drawing his head and chest plate. You may want to enlarge our reference image to make sure you portray all of the details.

If you struggle, you could use a pencil to draw some rough shapes for his head and body to aid in the proportions.

Step 2 – Next, draw his shoulders and some smaller details 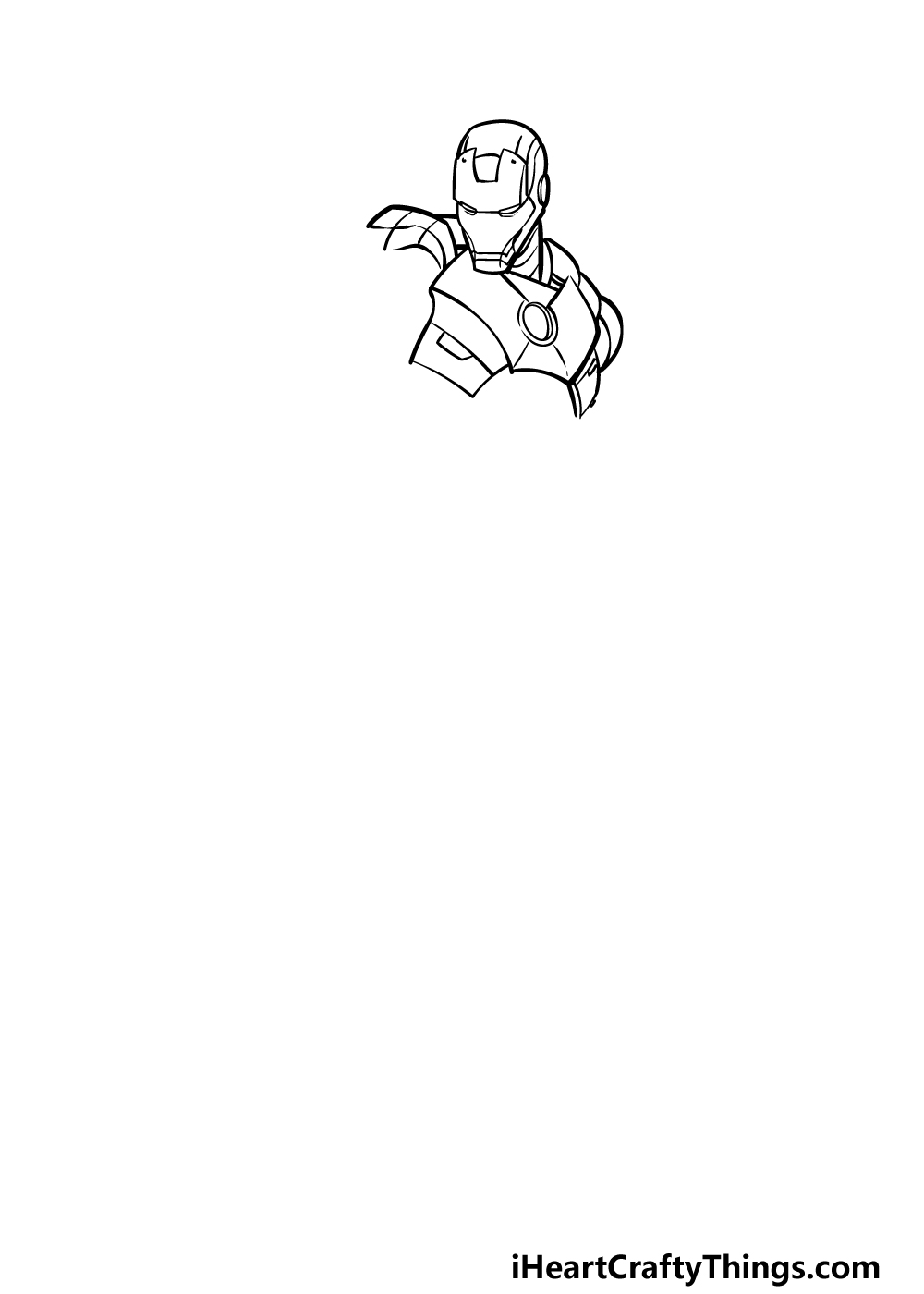 To continue this Iron Man drawing, the next thing we will be adding will be his shoulders.

These will be drawn with more curved lines that come together to form various smaller sections connecting to one another.

Then, add some dots to his faceplate for some bolts there that are helping to hold it together.

Then we can proceed to step 3!

Step 3 – Now, draw his chest and other details 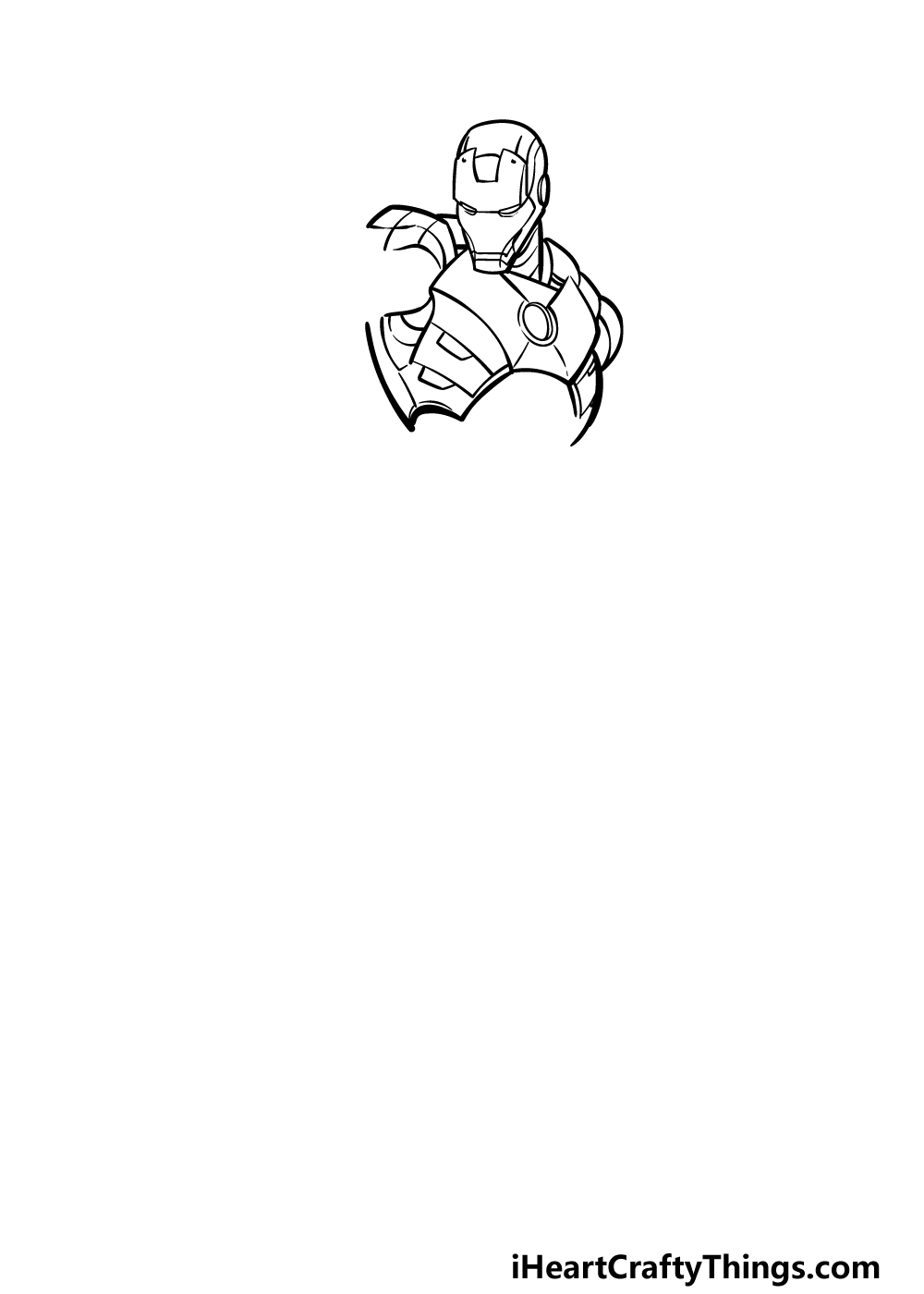 We shall be building more onto the armor in this step of our guide on how to draw Iron Man. this step will see you adding some more to his chest to finish it off.

You can use some more curved lines to add these individual sections that make up this area. There will be spaces left at his shoulders and waist that we will add to later.

The reason there are so many sections to his armor is to give him more mobility while in his heavy metallic suit.

Step 4 – Next, draw his waist and hip sections 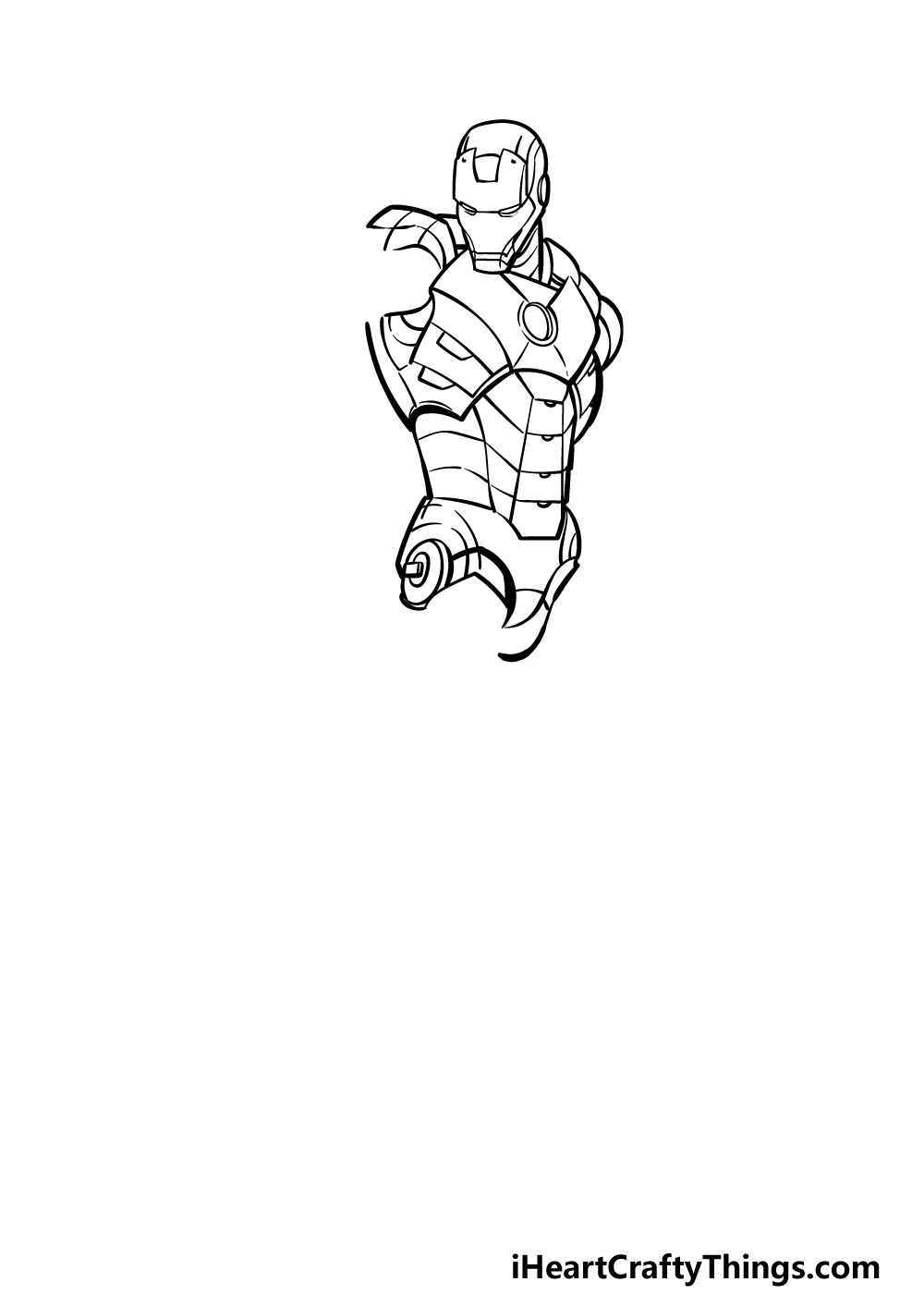 Now we will be drawing even more sections of his armor as we move to this fourth step of your Iron Man drawing.

The waist section will have even more sections than many other parts of the armor, as his waist is where he needs a lot of mobility.

This section will be quite thin and angular as well, and then it will lead to the hip section.

This hip section will be drawn using some rounded lines to form the hope section as a separate part to the rest of the armor. 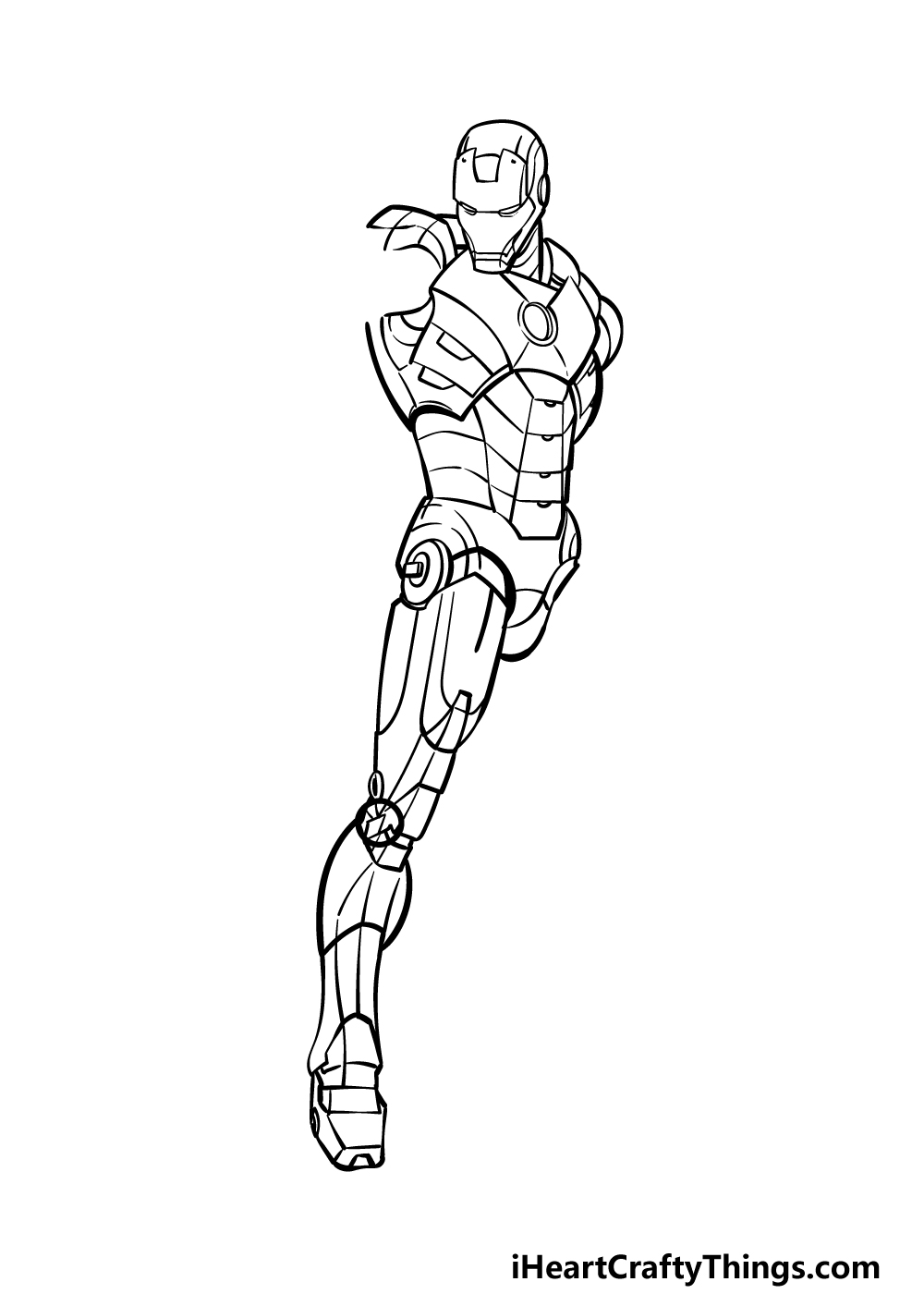 We will be drawing the final aspects of the image in the next few steps of this guide on how to draw Iron Man. the part we will be focusing on in this fifth step will be the leg on the left.

The legs will be some of the most detailed aspects of this drawing, as there will once again be tons of smaller details included.

Use a combination of curved and straight lines while carefully following the reference image as you draw this leg, and then we will add the next one in the following step. 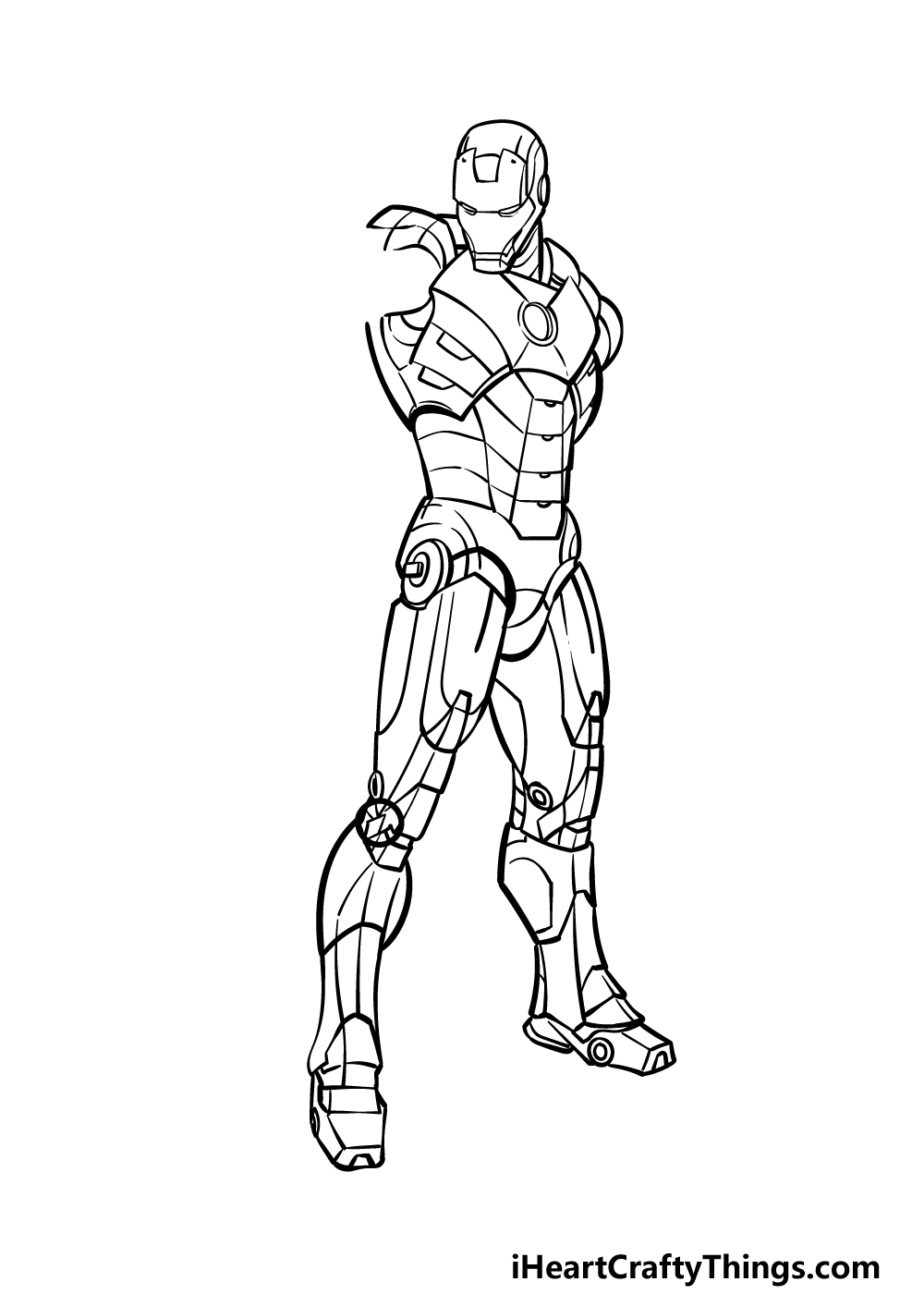 You’ve drawn one leg for your Iron Man drawing, so adding this second one should be a bit easier!

This leg will look very similar, but it will be at a slightly different angle to the previous one. Once you have drawn this second leg, we can add his arms in the next one.

Step 7 – Draw his arms to finish off 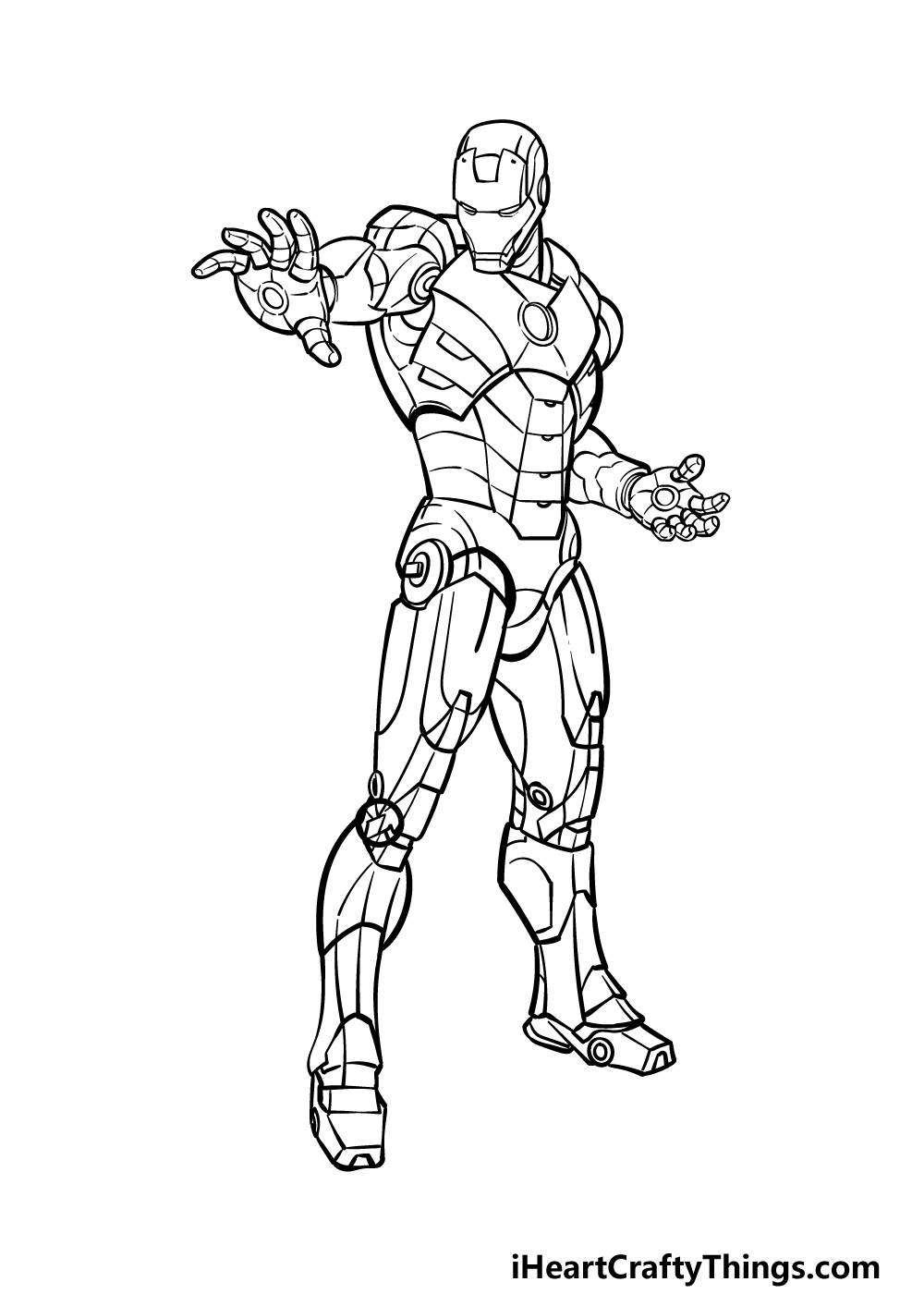 Before you move to the final step of this guide on how to draw Iron Man, you will be drawing his arms.

The one on the left will be raised up, and this means we will be able to see the round repulsor beam on his palm. The arm on the right will be lower, but we will also be able to see his palm on that one.

Before the final step, you could also draw a cool background to create an awesome Iron Man scene! 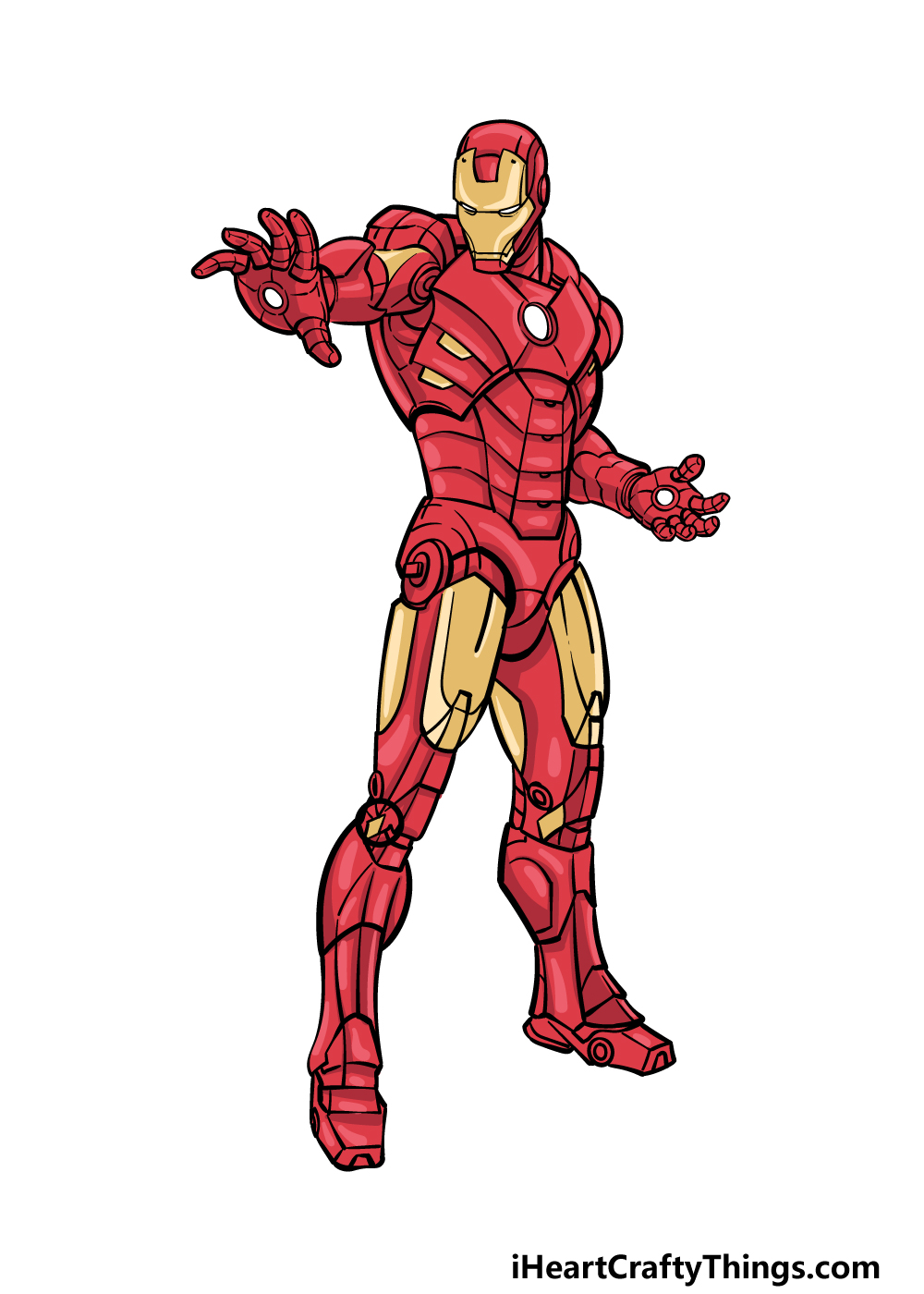 Iron Man is a really striking, colorful character. We will be adding some of these colors in this part of your Iron Man drawing.

His usual color scheme is bright red with elements of gold incorporated. When coloring his armor, it would be recommended to use art mediums such as colored markers, acrylic paints or pens, as these would allow for really bright shades.

Will you color Iron Man with his usual color scheme or will you create a new one for him?

Create a heroic artwork with these fun tips and ideas we have for your Iron Man sketch!

Iron Man is one of many superheroes in the Marvel universe, and you could add some more of them to this Iron Man drawing.

You could go with any heroes you like, but the obvious choices would be some of his fellow Avengers.

These would include characters like Captain America, Thor, The Hulk and many more! You could look at the comics or movies for inspiration if you would like to add some more characters.

Can you think of other heroes who could join him?

The Marvel universe is filled with many iconic locations, and you could use some of them for this drawing of Iron Man. some ideas would include Stark Tower or maybe New York City.

If you went with our previous suggestion of adding characters, then be sure to incorporate them into the scene as well! What favorite Marvel locations could you use?

Iron Man is the superhero persona of billionaire Tony Stark, and he is another character you could add to this Iron Man sketch. By drawing Tony, you could have him inspecting his armor or maybe even performing repairs.

In the comics and movies, we will also sometimes get a view of Tony’s face as he’s in the suit. You could draw that view next to the armor to show his face inside of the helmet!

If you were to add Tony, would you use his comic or film appearance as inspiration?

The Iron Man armor we drew in this guide is one of the more iconic iterations of the armor. That being said, there are many other kinds of armor that Tony Stark has worn throughout the years.

You could change some of the details to create these alternate suits of armor to put a new spin on this drawing!

You would have so many different suits to choose from, and you could even feature multiple suits on one page.

Your Iron Man Drawing is Complete!

This character has become incredibly popular in recent years, and we hope that you had a great time recreating him in this guide on how to draw Iron Man!

He’s a difficult character to draw because of all the small details, but as long as you follow all of the steps closely then you’l get the hang of it in no time.

Then you could finish up by adding some additional details, elements, ideas, colors and art mediums of your own to add your own spin to it. Be sure to have fun getting creative!

You can also find more drawing guides on our website to enjoy. There’s a huge selection that we frequently update, so be sure to check in often!

We would also love to see how your awesome Iron Man drawing turned out, so please be sure to share it on our Facebook and Pinterest pages when it’s done! 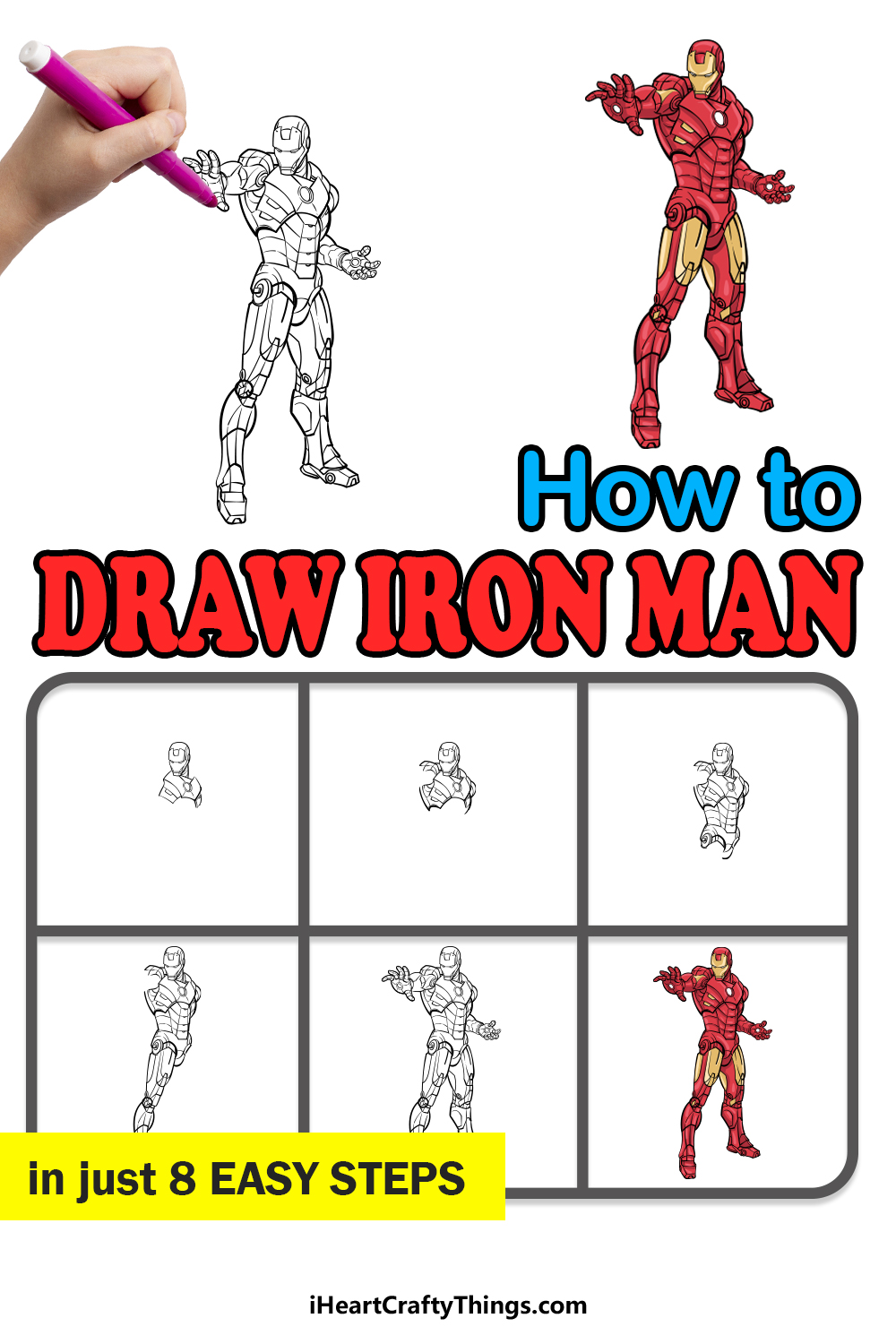 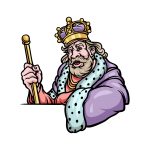 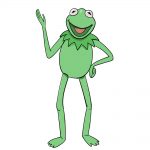