The hamster is a domesticated type of small rodent that is commonly kept as a house pet. What sets hamsters apart from other rodents are their short tails, stubby legs, and small ears.

Because of the hamster’s adorable features and remarkable cleverness, they are among the top choices when choosing a house pet.

This is also the reason why many people find hamsters very interesting to draw.

To meet our reader’s demands, we have created a step-by-step tutorial on how to draw a hamster.

This tutorial consists of 9 easy steps paired with simple illustrations, making the process of drawing a hamster a lot easier for you! 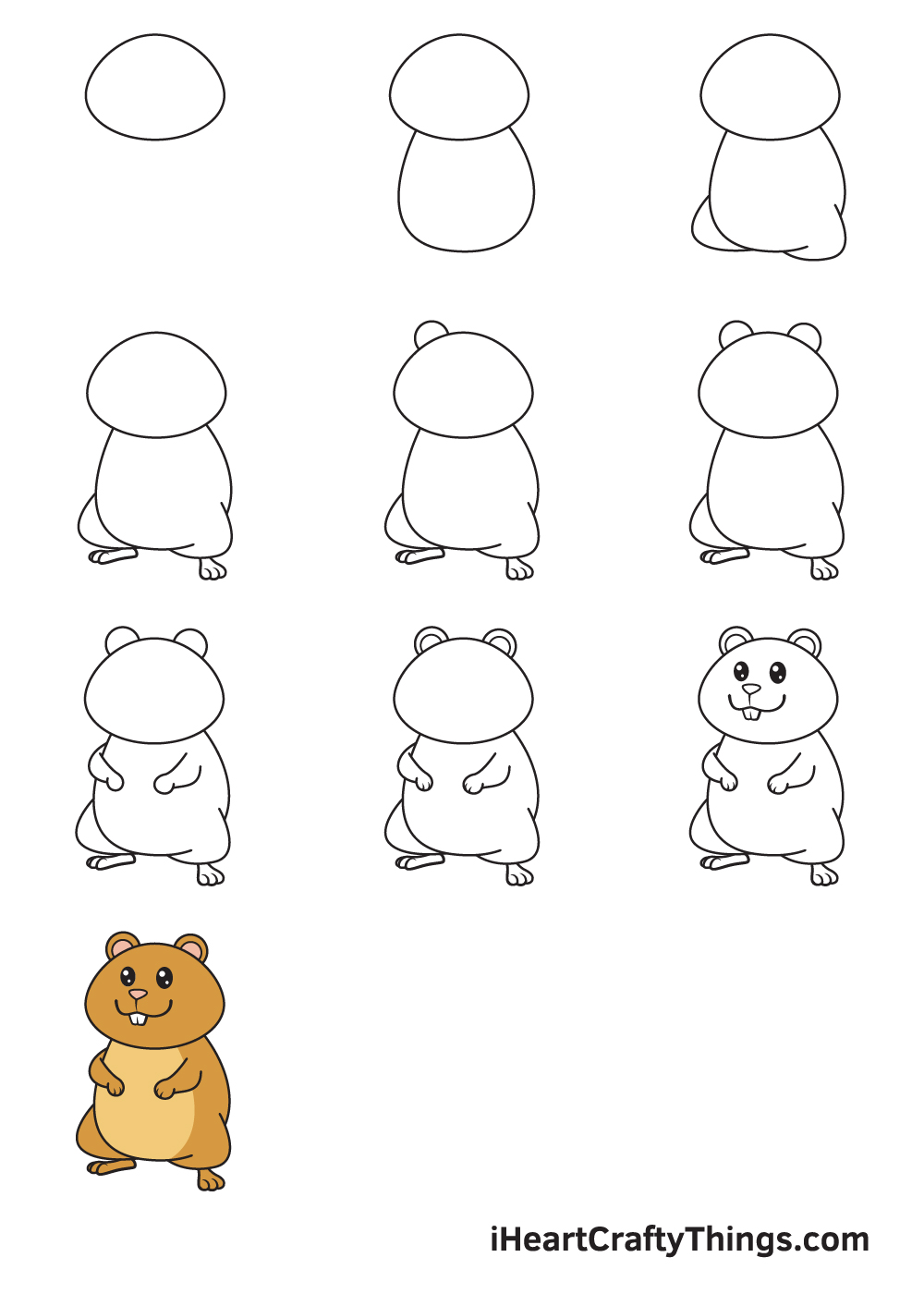 How to Draw a Hamster — Let’s get started!

Starting on the upper portion of your paper, draw an irregular circle shape with greater width than length. This creates an outline of the hamster’s head.

Did you know that hamsters typically stuff food on either—or both—sides of its cheeks to carry the food back to their sleeping area.

The insides of their cheeks are particularly spacious, enabling them to store lots of food on their cheeks. Thus, don’t forget to emphasize the hamster’s cheeks when drawing its face!

To make sure that the hamster will be drawn in the center, create reference lines by drawing an intersecting horizontal and vertical line.

The vertical line above the horizontal line marks the spot where you should draw the outline of the head.

When drawing the outline of the body, avoid pressing down too hard with your pencil. It is important to draw with light strokes so you can easily erase any lines from the outline that you may no longer need later on.

Step 3 — Next, Draw the Legs of the Hamster

Make sure to get rid of any lines overlapping inside the right leg of the hamster by using an eraser.

Right underneath each leg, draw a small foot with three paws.

Take note that since the hamster is facing towards the left side, the left foot should be positioned sideways while the right foot must be straight.

Step 5 — Then, Draw the Left Ear of the Hamster

After finishing this step, the pair of ears of your hamster should now be complete.

Draw an elongated shape with a circle at the end on each side of the hamster’s upper body. This creates the pair of arms and hands of the hamster.

As you can see in the illustration, both arms of the hamster are on its front side, meeting over its chest.

Step 8 — Add Details on the Ears and Hands

When drawing animals, details and patterns are essential to add texture on your drawing, making it look more realistic. So, in this step, that’s exactly what we’ll be working on.

Starting from the top down to the bottom, draw a curved line within each ear parallel to its shape. This creates the appearance of the inside or inner ears.

Then, moving on to the hands, draw multiple short curved lines on both hands to separate each finger of the hamster.

To complete the look, create the features of your hamster’s face. How you draw the facial features determine if the expression or emotion of the hamster, or any character you’re drawing in general.

Starting from the top down to the bottom, draw two standing oval shapes for the eyes. Add shade to the entire eyes while leaving out two tiny circles unshaded to create the illusion of “glimmering eyes”.

To create the nose, simply draw an upside down wide triangle shape. Afterwards, draw a vertical line connected to the pointed tip at the bottom of the nose.

For the mouth, draw an upward curved line with a small bump in the middle. Don’t forget to add a single tooth in the middle underneath the hamster’s mouth—it’s one of the distinct features of a hamster!

Now that we’ve successfully drawn a hamster, it’s finally time for the most enjoyable part. In this final step, we’ll be choosing the colors and coloring the hamster.

This step is optional, but we recommend doing this to make your artwork look vibrant and colorful!

Hamsters come in six primary colors: white, black, grey, brown, yellow, and red. Any other colors of a hamster is a variation or a mixture of these basic colors.

You can opt to color the hamster using its original colors or handpick a unique set of colors to create a hamster like no other. Either way, we’re sure the colors will turn out beautifully!

Your Hamster Drawing is Complete!

Hopefully, you have fun drawing a hamster. Now that you can draw a hamster, you can incorporate it into more complex drawings in the future.

Maybe you can draw a hamster roaming in the fields or perhaps a human being playing with its pet hamster?

As soon as you finish drawing and coloring a hamster, make sure to show off your masterpiece!

We would love to see your sweet charming hamster! 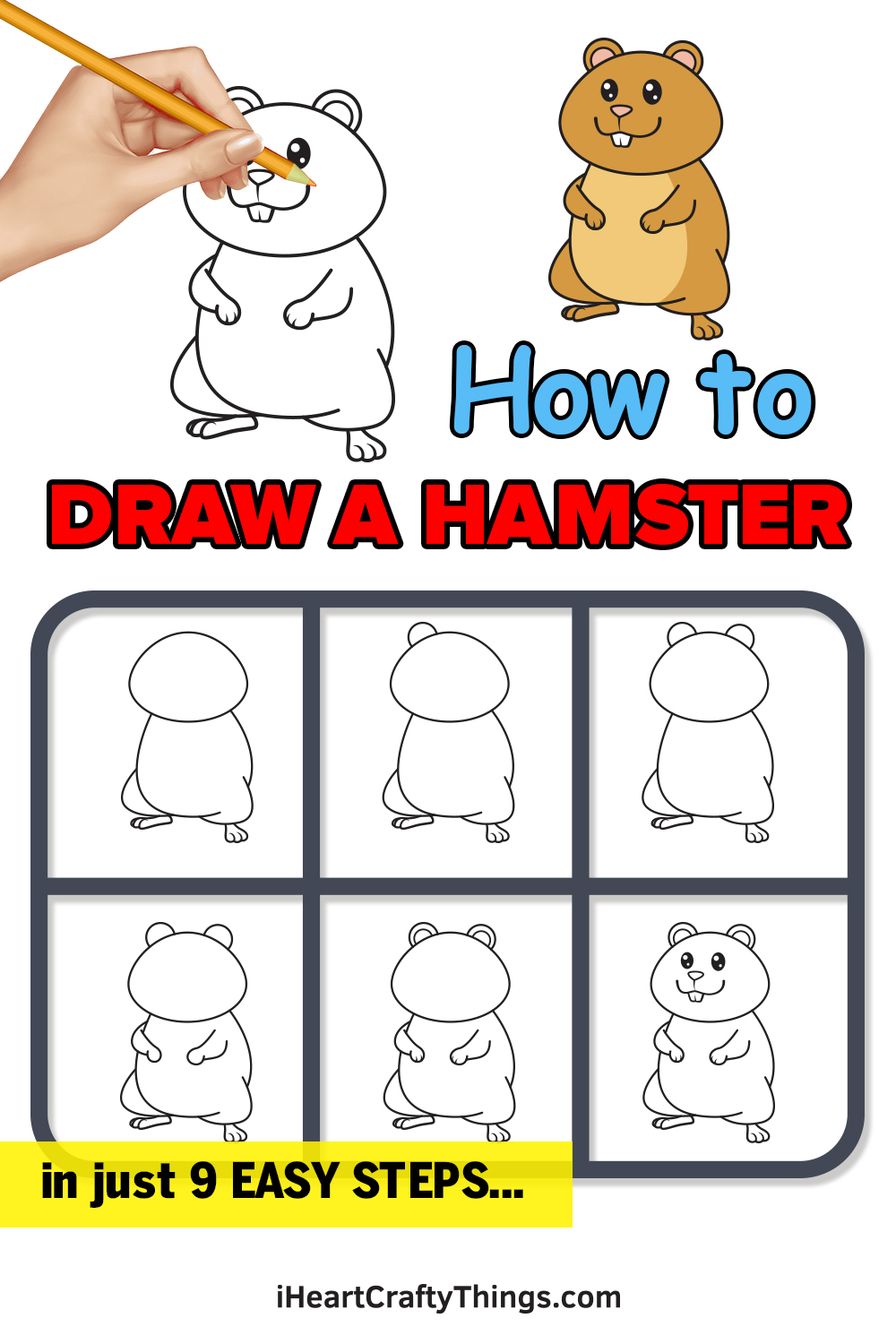