People show their affection towards their loved ones by holding their hand. Holding hands is a tangible way to feel connected to someone.

Like any other acts of intimacy, holding hands releases a hormone called oxytocin, which promotes bonding, connection, empathy, and trust.

Display of affection has become a common subject for many artworks, including drawing. Thus, we have created a step-by-step tutorial on how to draw holding hands, summed up in 9 easy steps and simple illustrations.

Hopefully, with the help of this guide, you can draw two people holding each others’ hands next. Have fun and use your imagination! 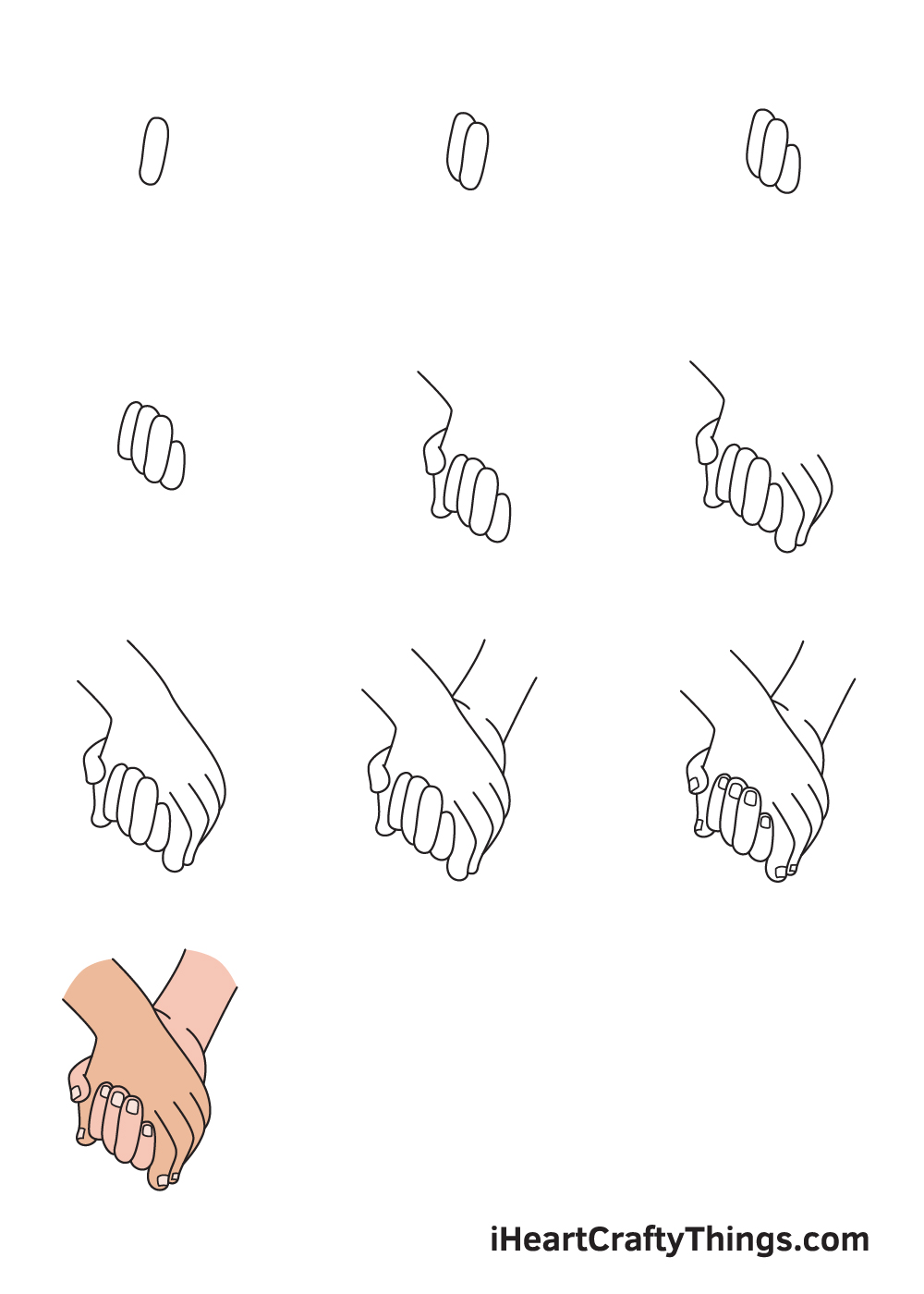 How to Draw Holding Hands — Let’s get started!

Start by drawing an irregular standing oval shape on the bottom part of your paper.

This forms the folded ring finger of the hand in the back.

Draw a similar shape on the left side of the ring finger that we drew in the previous step. This forms the folded middle finger of the hand in the back.

Keep in mind that the two fingers should be drawn side by side, directly touching each other. Also, the middle finger should be slightly longer than the ring finger.

After finishing this step, the ring finger and the middle finger of the hand in the back should now be complete.

Step 3 — Next, Draw the Pinky Finger of the Hand in the Back

Draw a smaller oval shape on the right side of the ring finger. This forms the pinky finger of the hand in the back.

Bear in mind that the pinky finger should be smaller than both the middle finger and ring finger.

Step 4 — Then, Draw the Index Finger of the Hand in the Back

Draw another oval shape on the left side of the middle finger. This forms the index finger of the hand in the back.

At this point, the index, middle, ring, and pinky finger of the hand in the back is now complete.

Remember, all four fingers should be side by side in a slightly diagonal formation.

Step 5 — Afterwards, Draw the Thumb of Both Hands

On the left side of your paper, draw a thumb right next to the index finger we drew previously. This forms the thumb of the hand in the front.

Afterwards, draw another finger folded over the thumb that we drew just now. This forms the thumb of the hand in the back, thus completing all of its five fingers.

When drawn correctly, it should look like the front hand is resting atop the back hand, as shown in the illustration above.

At this point, the holding hands should now be partially visible.

Step 7 — Now, Complete the Form of the Hand in the Front

Draw a diagonal line beginning from the wrist of the hand in the front all the way to form its pinky finger.

After finishing this step, the form of the hand in the front should now be complete.

Step 8 — Then, Draw the Wrist of the Hand in the Back

As you can see, the figure of the two holding hands have finally come together! Now, all it’s missing are some essential details to finalize the drawing!

Step 9 — Now, Add the Nails of Each Finger of Both Hands

Draw irregular square shapes on each tip of every finger to form the nails. Since some fingers are tilted to the side, you may need to draw a half square shape on some of the fingers like the thumb.

Also, the bottom part of the ring and pinky finger of the hand in the front is not visible, so you can skip drawing the nails on these fingers.

There you have it—you have successfully drawn holding hands! Now, it’s finally time for the most exciting part, which is coloring your drawing!

The colors you will be using for the hands are entirely up to you! But here’s a tip you may find useful: mix the colors white, yellow, red, and blue to create a skin tone color.

Depending on the complexion you’re trying to achieve, you may need to add more of any of these colors.

Have fun playing with colors and watch as the holding hands ultimately comes to life!

Your Holding Hands Drawing is Complete!

Hopefully, you have fun drawing holding hands with the help of this step-by-step tutorial.

Finishing a masterpiece like this is an achievement, so you should definitely feel proud of yourself!

Don’t forget to take a photo of your artwork and share it on our Facebook page and on Pinterest. Don’t be embarrassed—we’re sure it looks impressive!

We can’t wait to see your realistic holding hands drawing! 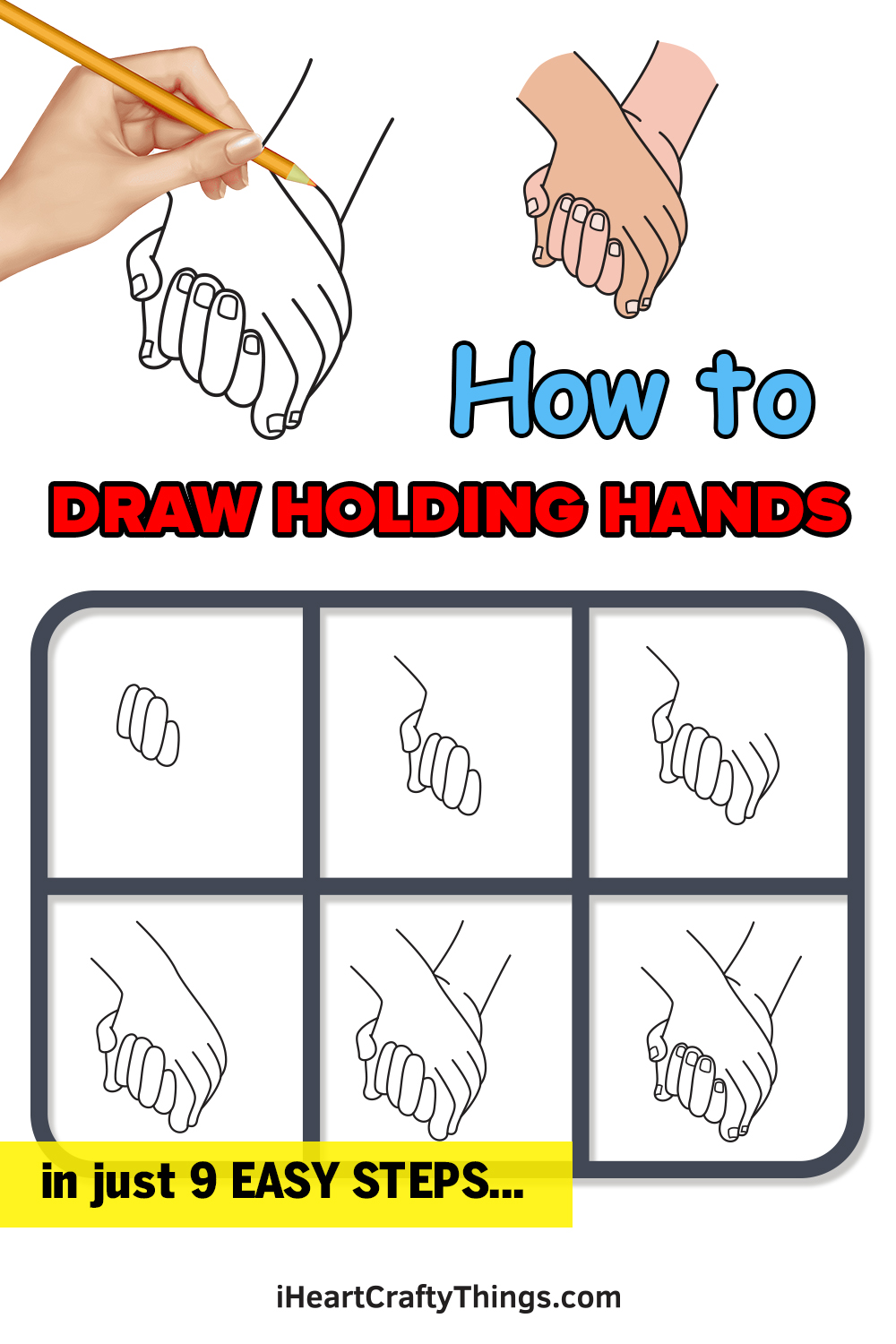