The classic 1941 Disney film has delighted audiences of all ages since its release. The film not only has memorable characters and a timeless soundtrack but also has important themes of accepting others for their differences and embracing your individuality.

At the heart of the film is the lovable elephant himself, and learning how to draw Dumbo is a great way to celebrate this classic character.

If you love this film and this cute elephant, then you are definitely on the right tutorial! You’ll definitely want to read all the way to the end of the guide if this sounds like you.

Our step by step guide on how to draw Dumbo in just 6 easy steps will show you everything you need to know about recreating this wonderful character. 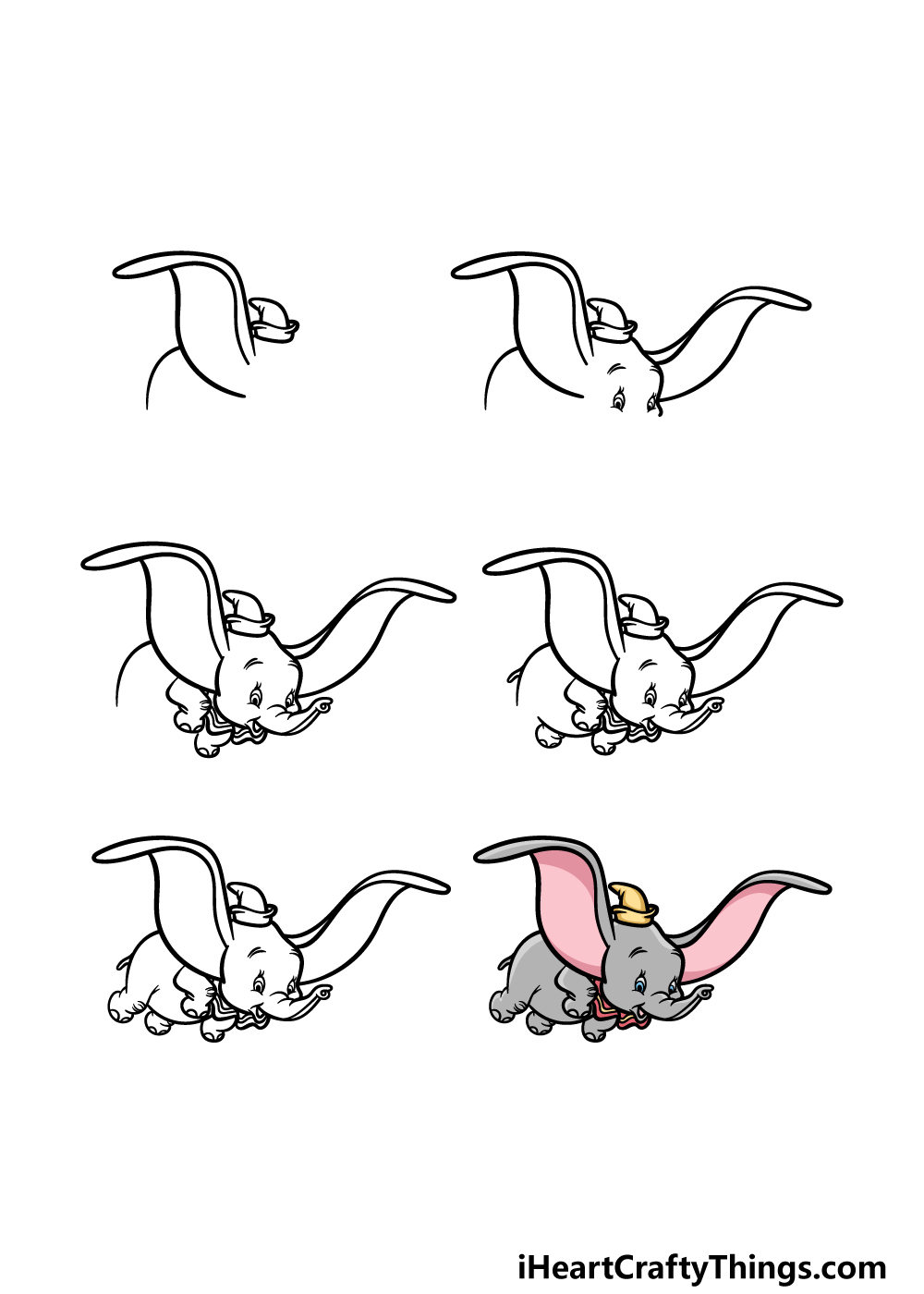 How to Draw Dumbo – Let’s Get Started! 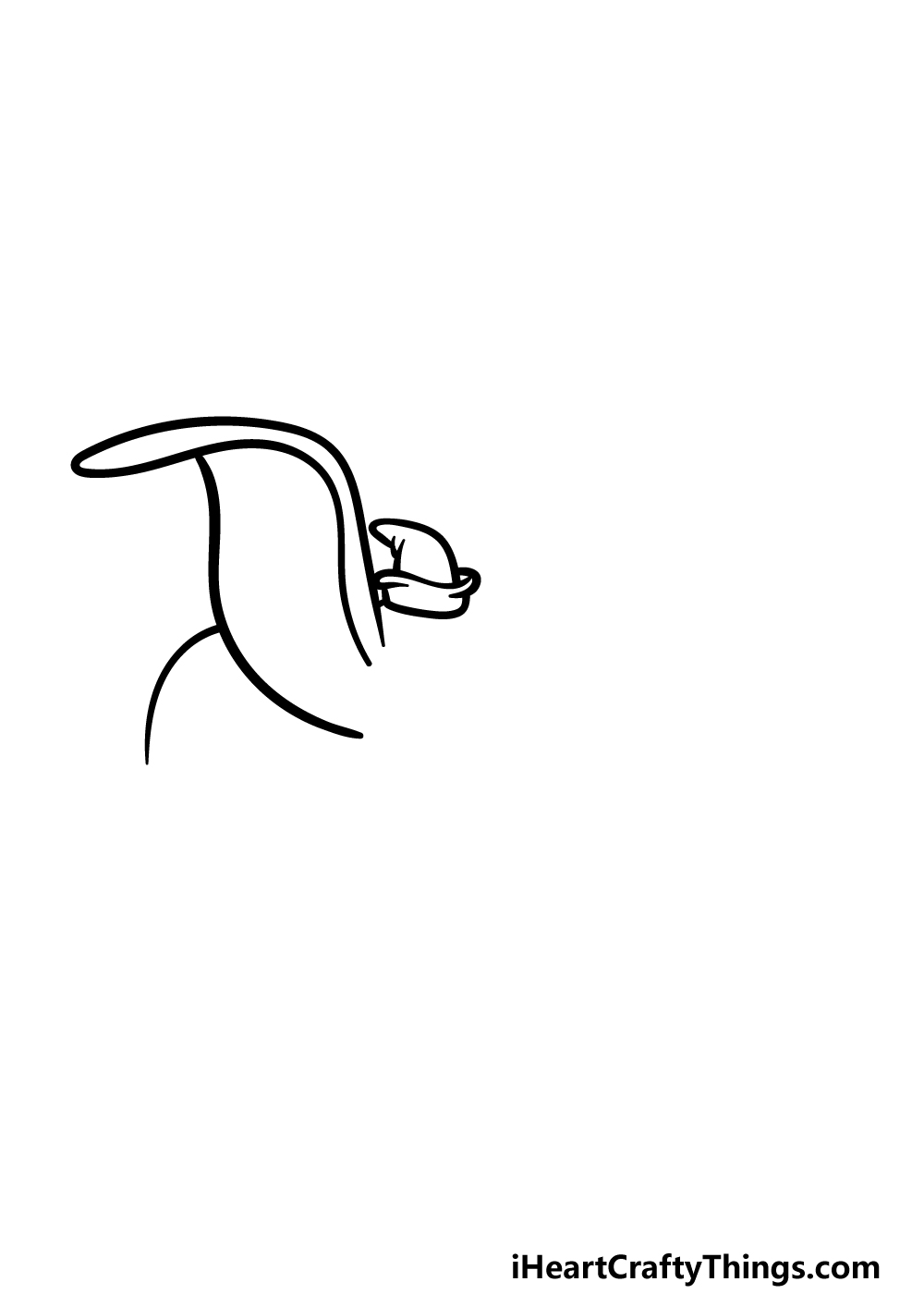 When one thinks of the character of Dumbo, the first thing to come to mind would probably be his large ears that he uses to soar through the air.

That is why we will be starting with one of his ears in this guide on how to draw Dumbo. First, let’s start with his signature hat.

This hat has a small rim and a pointy tip, and the reference image will show you how it should look.

Once that hat is drawn, we will then draw that big ear that we mentioned. Draw a long, thin and curved shape with a rounded tip for the right-hand side of the ear that is curling over a bit.

Then, extend another wavy line down from the top of the ear for the left-hand side.

Finally, add another curved line coming down from the ear for the start of Dumbo’s back. Then you will be ready for step 2! 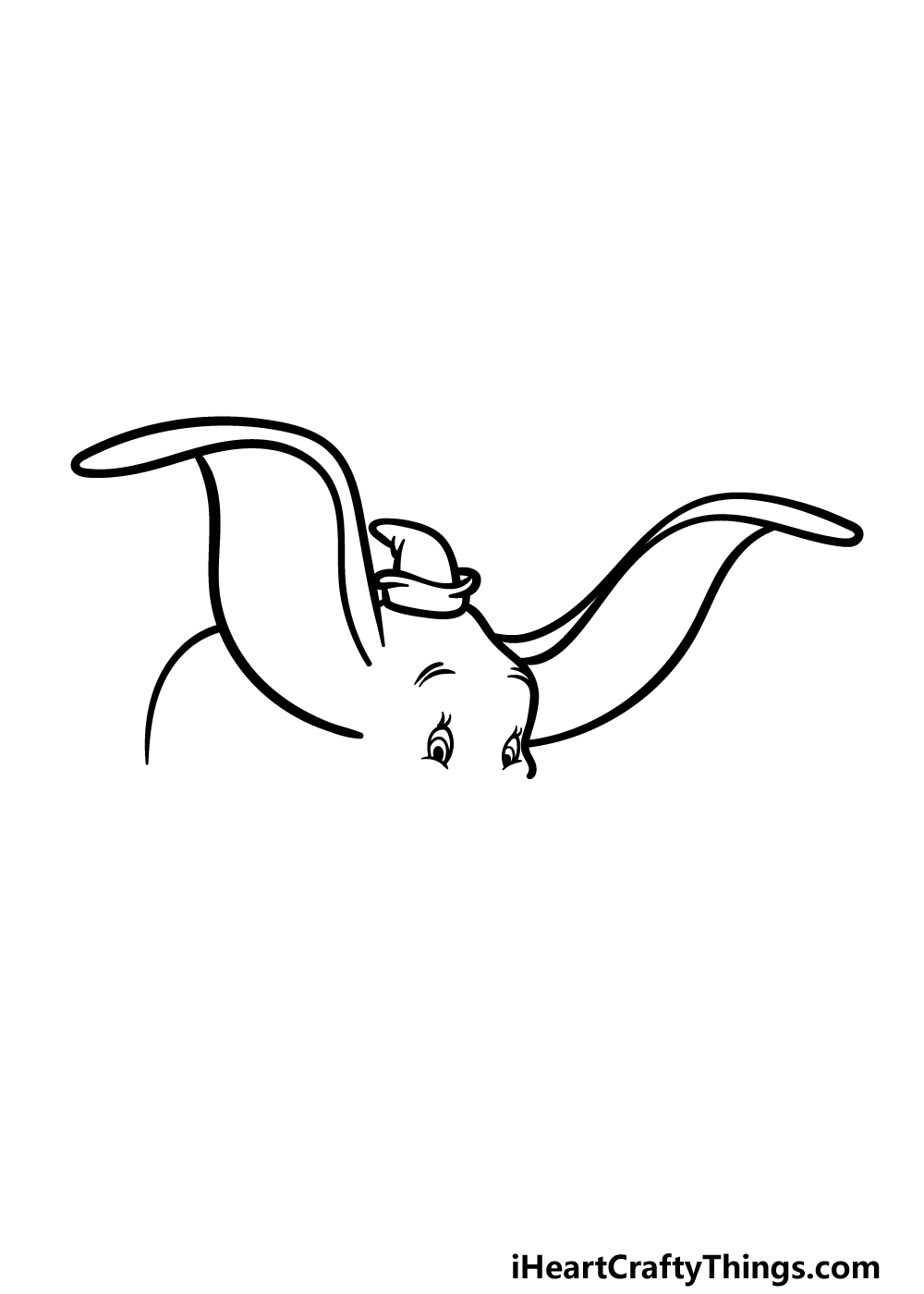 Now we shall start drawing the head and another ear for your Dumbo drawing in this next step. To do this, first you can draw another rounded line coming down from the base of his hat.

Once that is drawn, we will then add his eyes which are thin, vertical ovals with more rounded shapes within them. We will also draw some curved lines above the eyes for his eyebrows.

Finally, you can also draw the other ear on the right-hand side of his head. This ear will look very similar to the first one but will be thinner due to the perspective that we’re viewing it at.

Step 3 – Next, draw his trunk and facial details 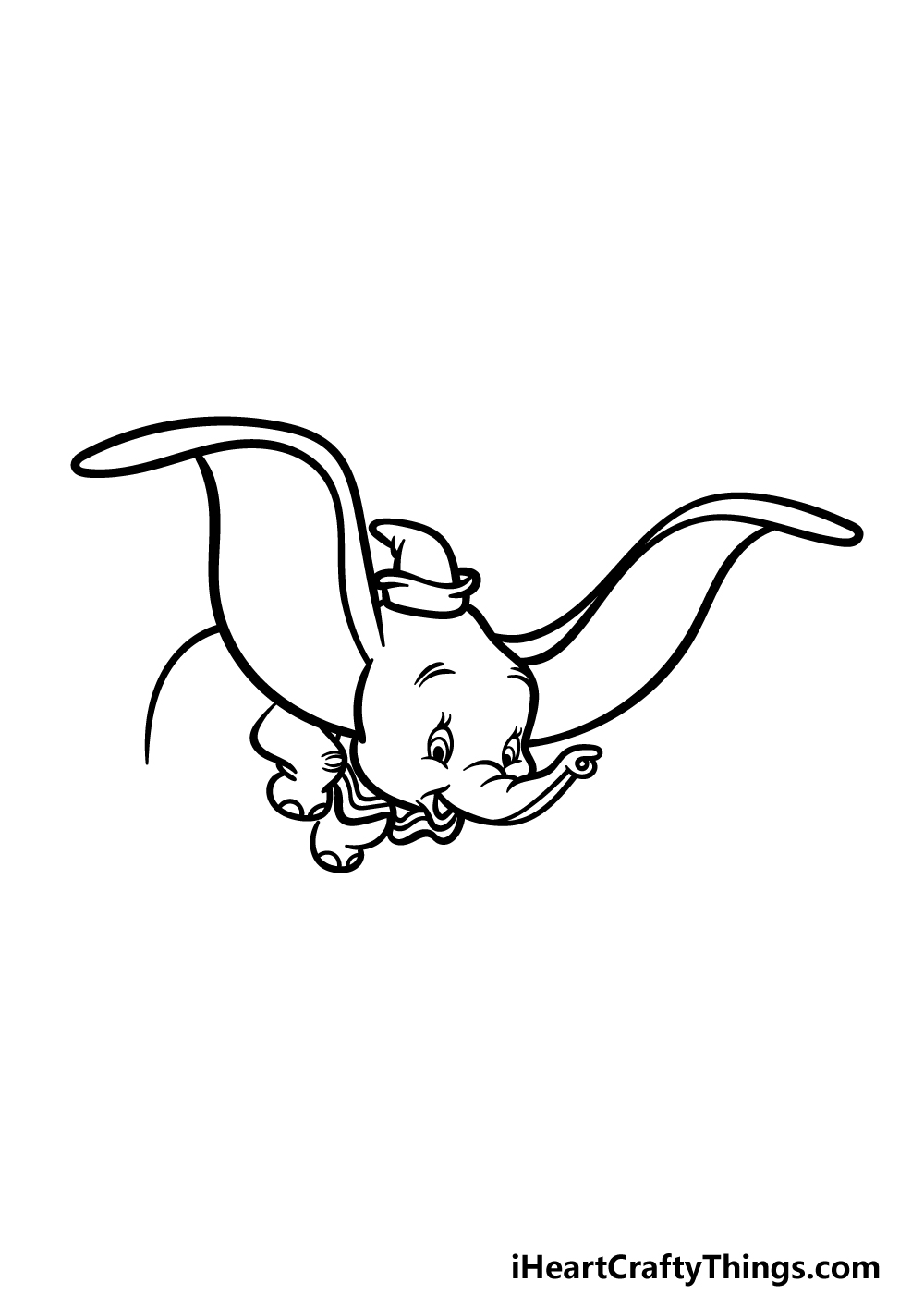 As we all know, Dumbo is a little elephant and that means that he must have a trunk!

That is why we shall add one for him along with some more facial details in this step of our guide on how to draw Dumbo.

The trunk will extend from between his eyes and will be drawn with some rounded lines connecting to one another. At the base of the trunk we will also add a smiling mouth.

After drawing the trunk, you can add a little collar around his neck using some more rounded lines, and then add his little legs tucked beneath him.

Step 4 – Now, draw his belly and his tail 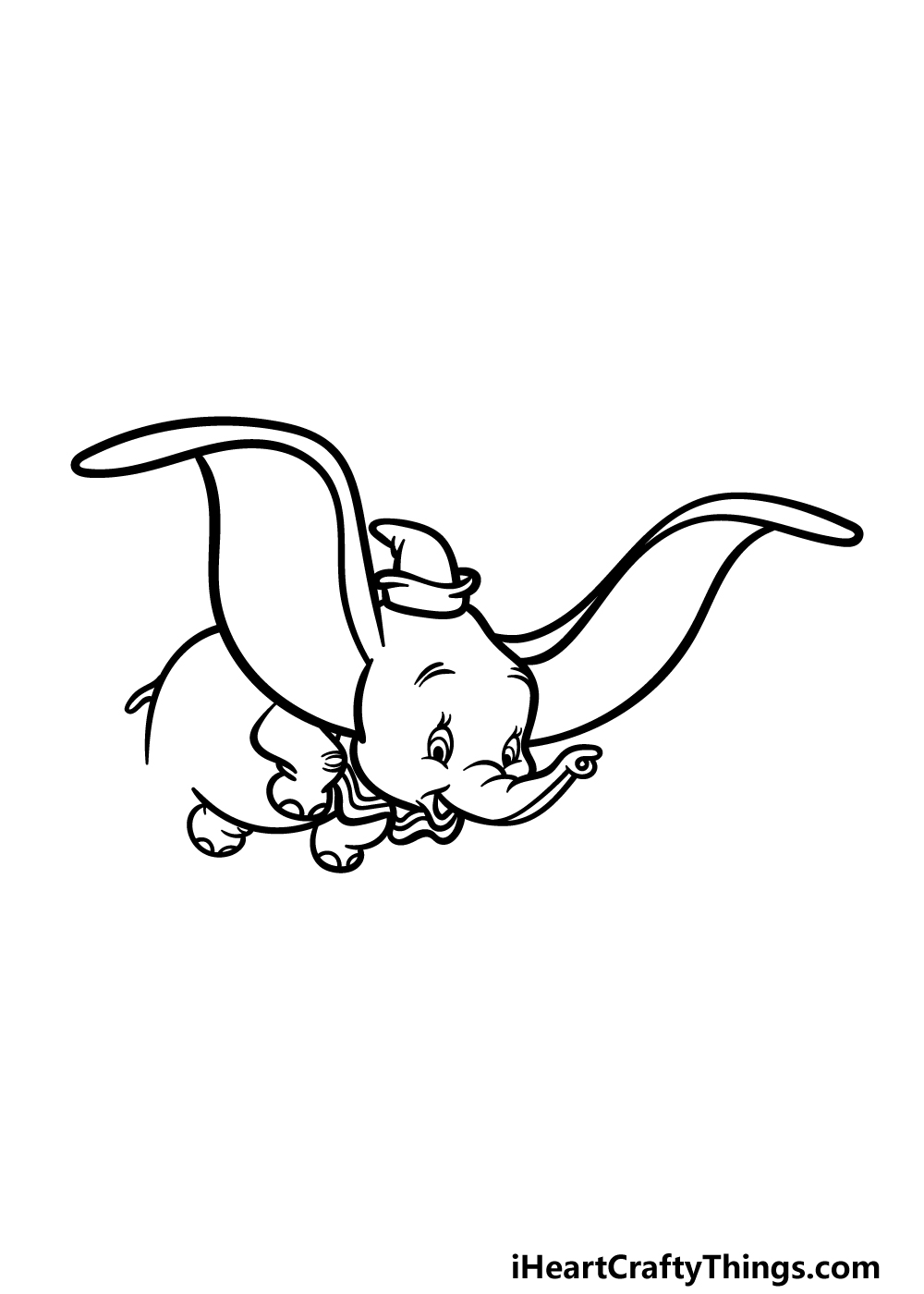 In the following step of this guide on how to draw Dumbo along with the next one, we will focus on finishing the final details and parts of your Dumbo drawing.

First, add a curved line underneath his body to draw his rounded belly. Then, we will be adding another little foot poking out below his belly.

To finish off this step, you can draw his little tail poking out at the back. Once all of these details have been drawn, we will then be ready to add the final details for this picture in the next step.

Step 5 – Add some final details to your Dumbo drawing 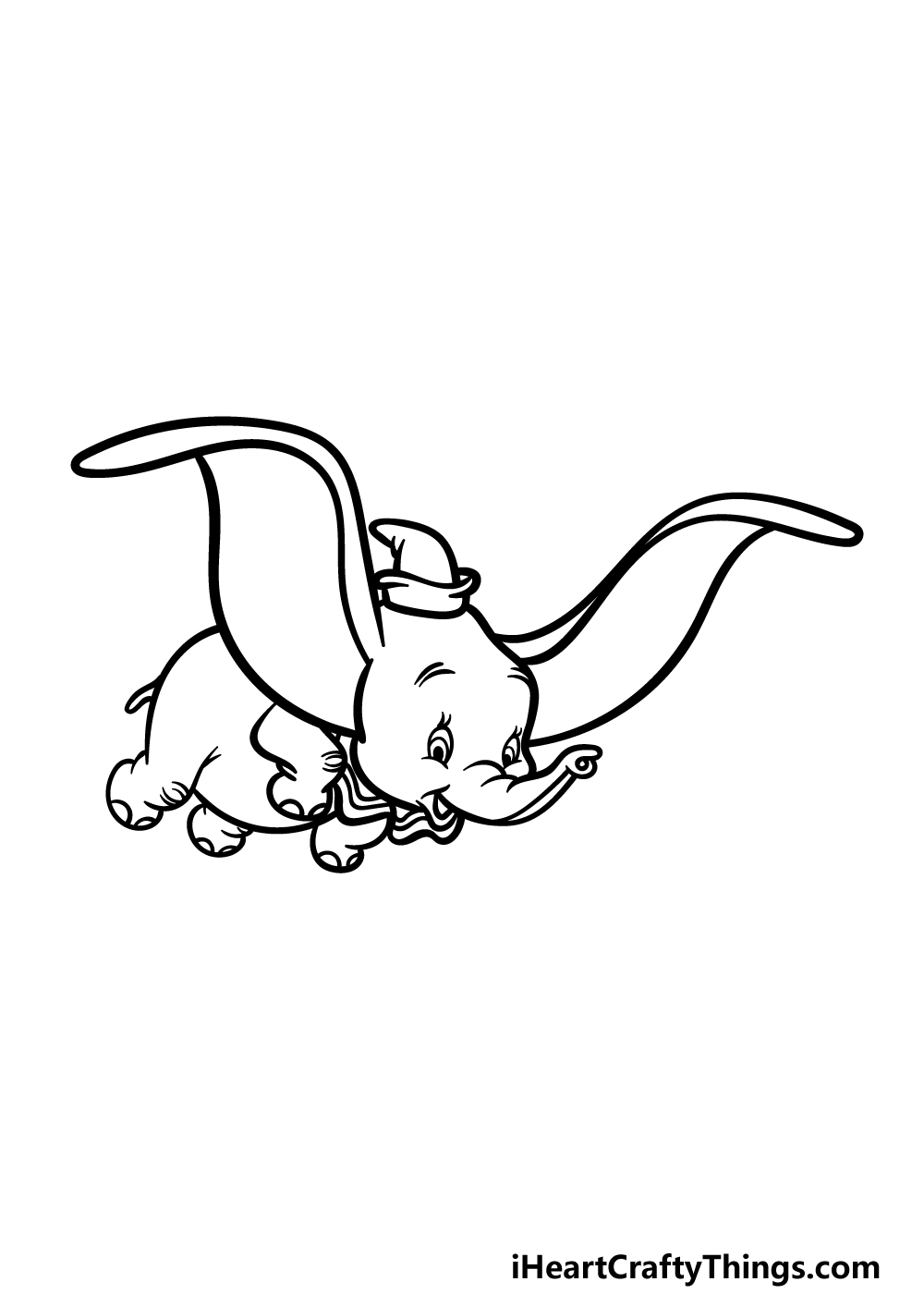 There’s one little empty space left on this picture, and we shall fill it in for this step of our guide on how to draw Dumbo.

To fill this space, we will be drawing the final leg for Dumbo, and this leg will look very similar to the other legs that you have drawn for him.

Once this leg is finished, you can then add some details and touches of your own before you move on! One cool idea would be to draw a background for this image.

You could use your favorite scene from the film to recreate the moment or create a brand new setting for Dumbo.

Adding some more beloved characters from the film would also really add to this image!

What will you do to finish off this drawing?

Step 6 – Finish off your Dumbo drawing with some color 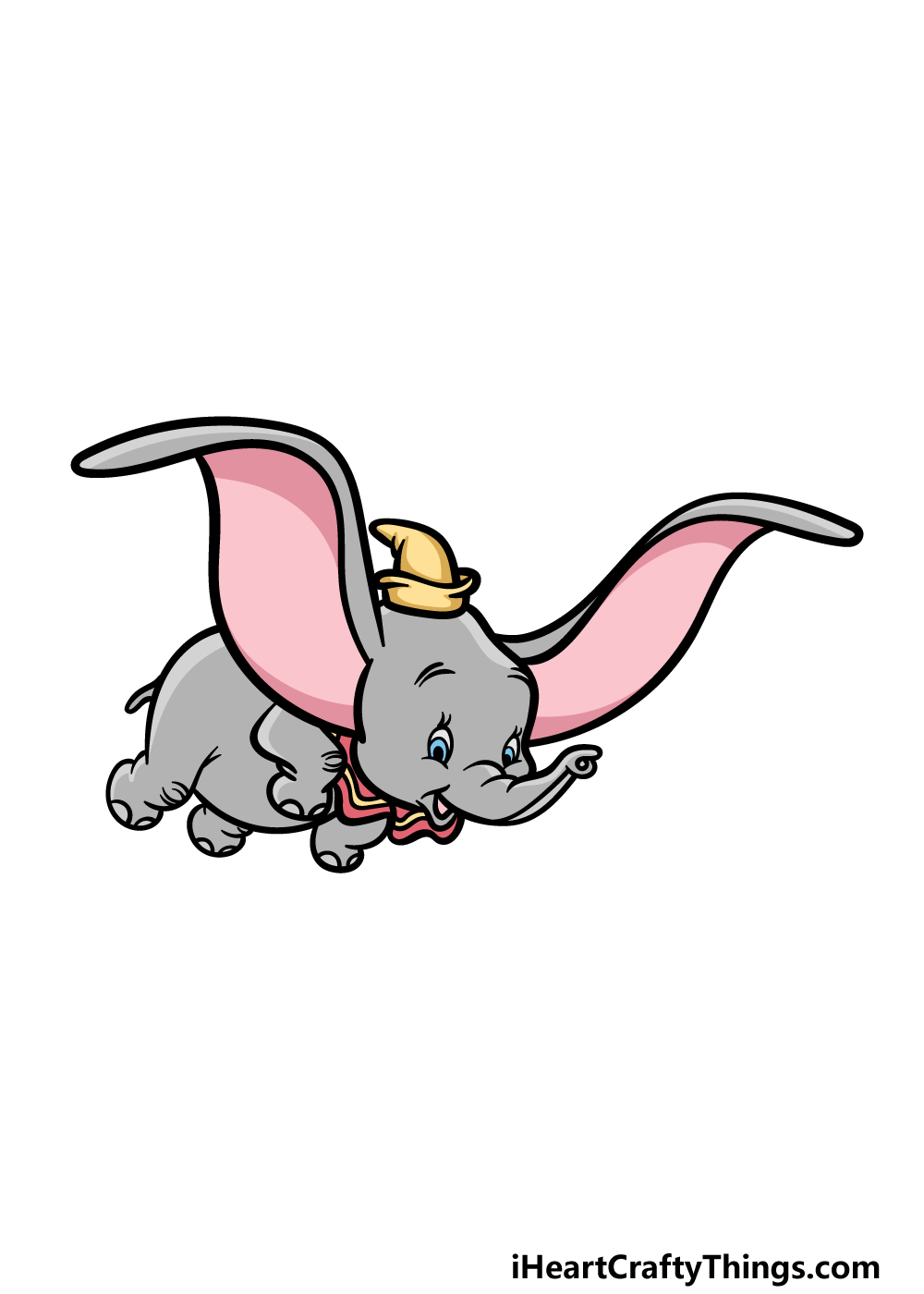 When coloring in our example image for this Dumbo drawing, we kept the colors looking accurate to how he appears in the film.

That means that we used greys for most of his body while incorporating some pinks for his inner ears.

Finally, we used reds and yellows for his collar and his hat. If you would like to keep Dumbo looking as he does in the film, then our example image will serve as a color guide that you can follow!

This is your drawing though, so if you would prefer to use some different colors or mediums to color him in then you should definitely feel free to get creative with it!

Here’s how you can make your Dumbo drawing even better…

Make this Dumbo sketch even more adorable with these 4 tips to try!

In a section of the Dumbo film, he joins a circus and has to wear some clown makeup as he performs tricks.

If you like this part of the movie, you could show this by adding this clown makeup to Dumbo!

It would be easy to do, and you could use any of your favorite coloring mediums to apply the clown look. This would be a fun way of creating a variation of this image that also tributes a famous scene!

In the film, Dumbo is joined by many other characters that are also really beloved and famous. Two of the best characters you could add would be Timothy the mouse and Dumbo’s mother.

There are so many other characters you could also draw, and you can represent any of your favorite characters from the movie.

The only question is which characters would you like to include in the picture to join Dumbo?

One of the defining traits of the Dumbo character is that he can use his large ears to fly through the air. The way he is depicted in this Dumbo drawing would make it perfect to show him flying!

If you wanted to do that, it could be as easy as coloring the background a sky blue and adding some fluffy clouds as well.

If you want to take it even further, you could show the ground far beneath him with some buildings and trees.

If you wish to create a background for your Dumbo sketch but don’t want to show him flying, there are many other backgrounds you could use instead.

First, we mentioned the circus scene the film is famous for.

That would be a great background setting for your drawing! In the film, we see many other locations and places that would also make for some incredible backgrounds, however.

You could start by choosing your favorite scenes from the film and then using the backgrounds of those scenes as inspiration.

Your Dumbo Drawing is Complete!

The Dumbo film is such a classic, and we hope that you enjoyed creating its main character in this guide on how to draw Dumbo!

Even when a character is this well known, it can still be a challenge to learn how to draw them and get all the details looking right.

That’s why we tried to break it down for you so that you could focus on the fun of drawing with no frustrations.

Once you have finished the drawing, be sure to add any additional details or elements of your own! We mentioned a few ideas, but this is your chance to really show off your creativity.

There are more amazing drawing guides to enjoy on our website, so be sure to visit us there for more fun! We upload new ones often, so definitely keep checking in to never miss out. 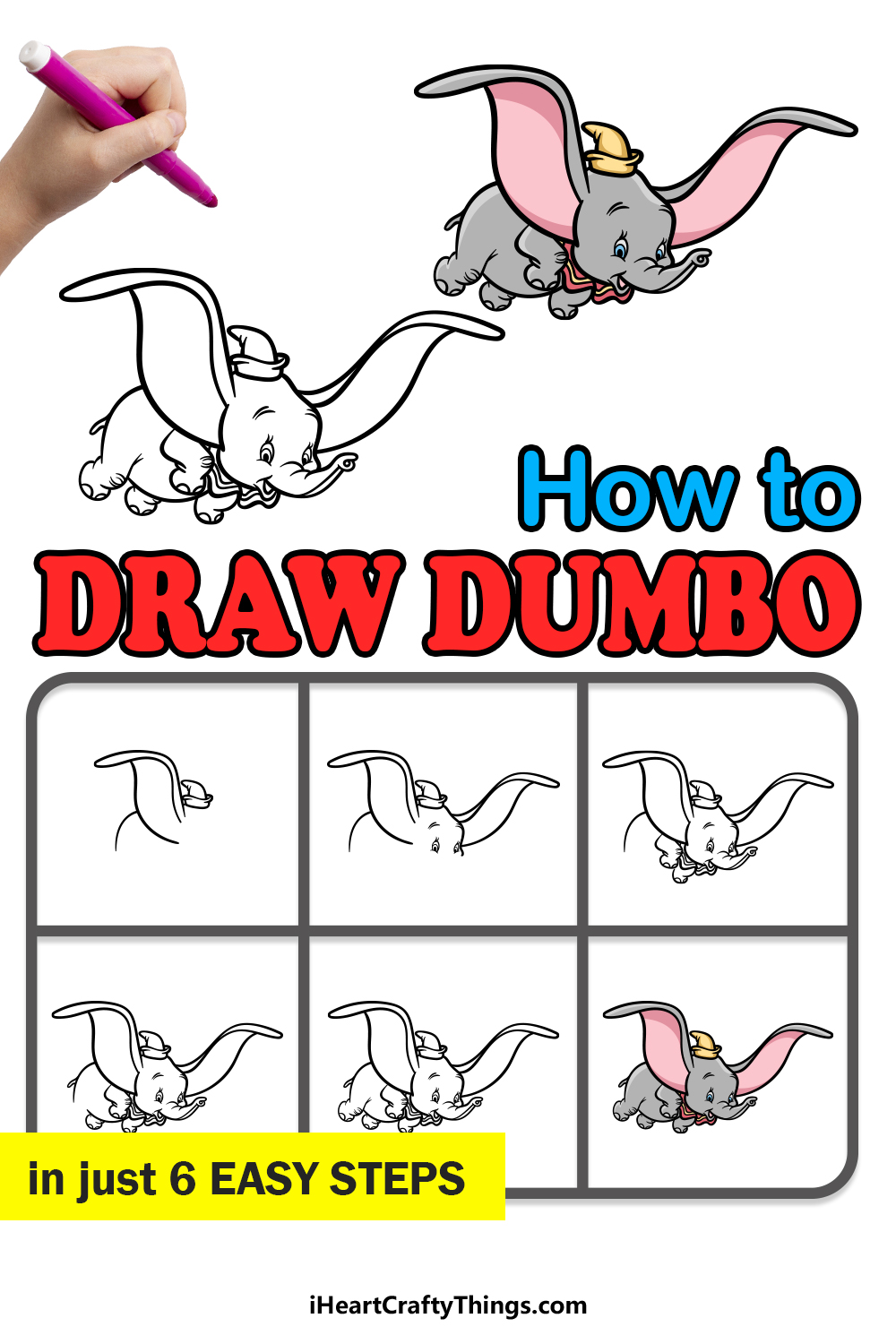 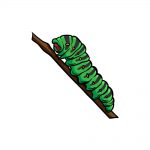 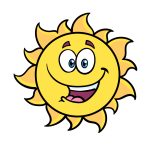