Drawing cute characters, animals, and animated objects are getting popular nowadays. They all vary in appearance, but all of them have one similarity: cute faces.

Learning how to draw cute facial features is the key to drawing cute stuff.

Fortunately, we have created a step-by-step tutorial on how to draw cute, summarized in 9 simple and easy steps.

This tutorial also consists of 9 elaborate illustrations accompanying each instruction, making the process a lot easier for you! 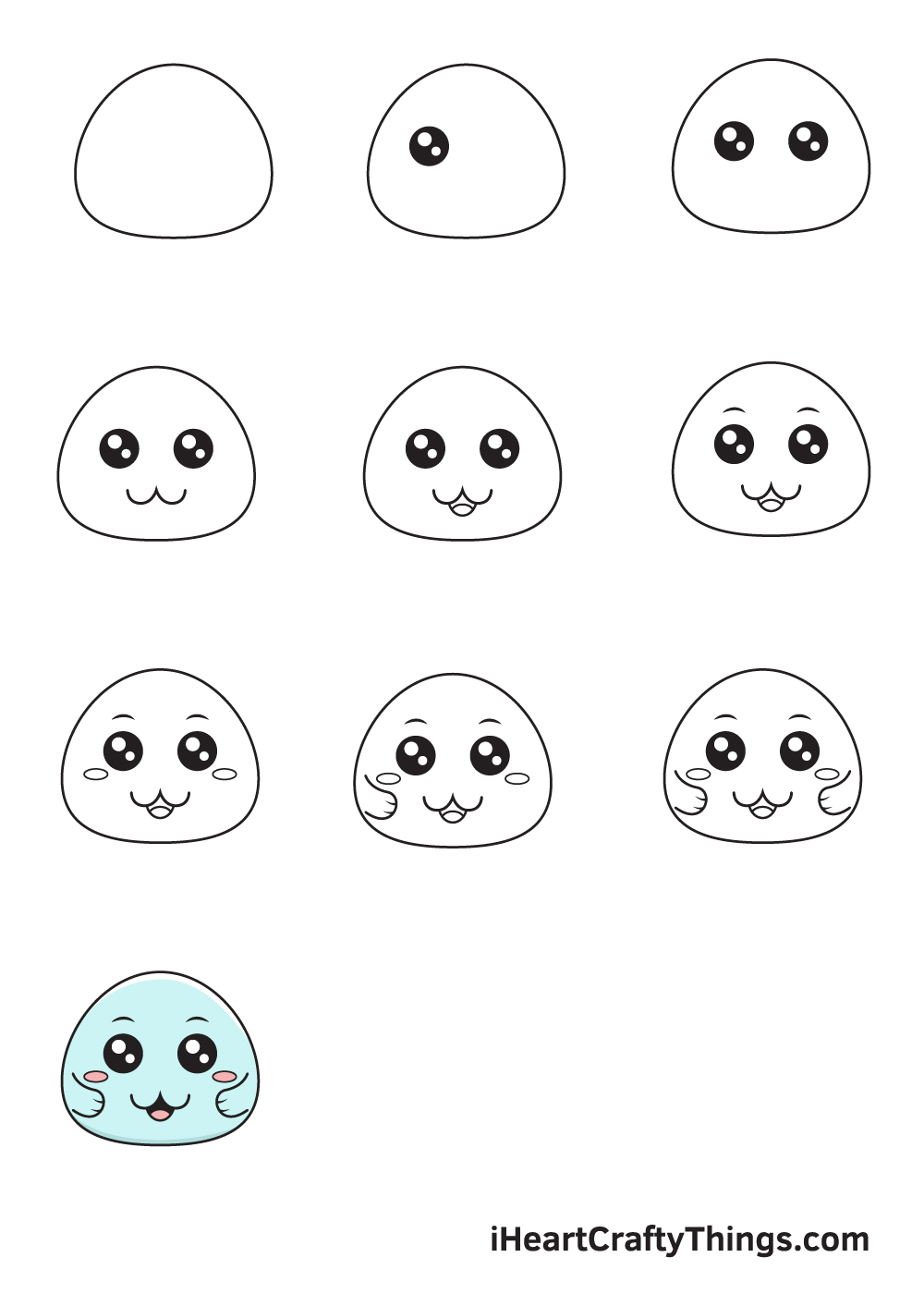 What’s fun about this is that you can draw this face pretty much on anything! It can be on a human character, animal, or even objects you want to come to life!

Remember, the sky’s the limit to your imagination and creativity!

Have fun drawing something cute!

How to Draw Cute — Let’s get started!

Start by drawing an irregular circle shape in the middle of your paper. Keep in mind that the bottom part of the figure must be relatively wider than the top part.

Remember, draw with light strokes when creating an outline. Avoid pressing down too hard with your pencil so you can easily erase some parts of the outline that you no longer need later on.

Make sure that the figure will be drawn in the center of your paper. To ensure this, you can create reference lines by drawing an intersecting horizontal and vertical line across your paper.

The point where the two lines meet marks the center point, which is where you should draw the outline.

Step 2 — Draw the Left Eye of the Cute Character

Draw a small circle shape on the upper left side of the figure that we drew in the previous step. This forms the outline of the left eye.

Afterwards, draw two smaller circles within the eye. Now, shade the entire eyes except for the two tiny circles to create a dramatic “sparkling eyes” effect.

Step 3 — Next, Complete Both Eyes of the Cute

Repeat the previous step on the opposite side of the character’s face.

At this point, both the left and the right eye of the cute character should be complete.

Draw two connected curved lines side by side below the eyes to form the upper lip.

Make sure that the lip is drawn on the center of the bottom part of the figure.

To create the entire mouth, draw a U-shaped line right underneath the upper lip. This forms the lower lip of your character.

This makes the mouth appear like its wide open, making your cute character look extremely happy!

Don’t forget to add a downward curve inside the mouth to create the tongue!

Step 6 — Draw the Eyebrows of the Cute Character

Draw a short downward curved line right above each eye to create the eyebrows. Make sure that the form of the eyebrows are uniform and drawn within the same level.

After finishing this step, the pair of eyebrows of your cute character should now be complete.

Step 7 — Next, Create a Blushing Effect on the Cheeks

Draw a sideways oval shape on each cheek below the eyes of the character. This makes the cheeks appear flushed or like it’s reddening.

On the left side of its body, draw a sideways U-shaped curve right underneath its cheeks.

Afterwards, draw two short curved lines on the bottom of the figure. This forms the left arm of the cute character.

Step 9 — Draw the Other Arm on the Opposite Side

Repeat the previous step on the opposite side of the cute character’s body to form the right arm.

At this point, the cute character should now have a pair of arms.

After drawing a cute character, it’s finally time for the part you’ve probably been waiting for, which is coloring your drawing!

Take this opportunity to showcase your artistic skills, especially your ability to mix and match colors.

As you can see in the illustration, we’ve kept the colors plain and simple. We colored the entire body of the cute character with color blue while its flushed cheeks and tongue is pink.

You can opt to color your drawing similar to how we’ve done ours or handpick a unique set of colors.

We recommend doing the latter so you can customize your artwork and make this experience a lot more fun! And while you’re at it, why not try experimenting with various coloring materials as well?

Your Cute Drawing is Complete!

Hopefully, you enjoy this step-by-step cute drawing. Now that you can draw a cute face, did you know that you can incorporate this when drawing characters, animals, and even objects?

You can make anything cute by animating pretty much anything with this cute face!

If you had a good time drawing a cute character, then you might also be interested in drawing cool things or perhaps an emoji?

Check out our “How to Draw” catalog to explore many more fun drawing tutorials like this!

After you’ve finished drawing and coloring the cute character, don’t forget to show off your masterpiece!

Take a picture of your colored drawing and share it on our Facebook Page and on Pinterest. Don’t be embarrassed—you’ve worked hard for it so we’re sure it’s awesome!

We would love to see how adorable your drawing is! 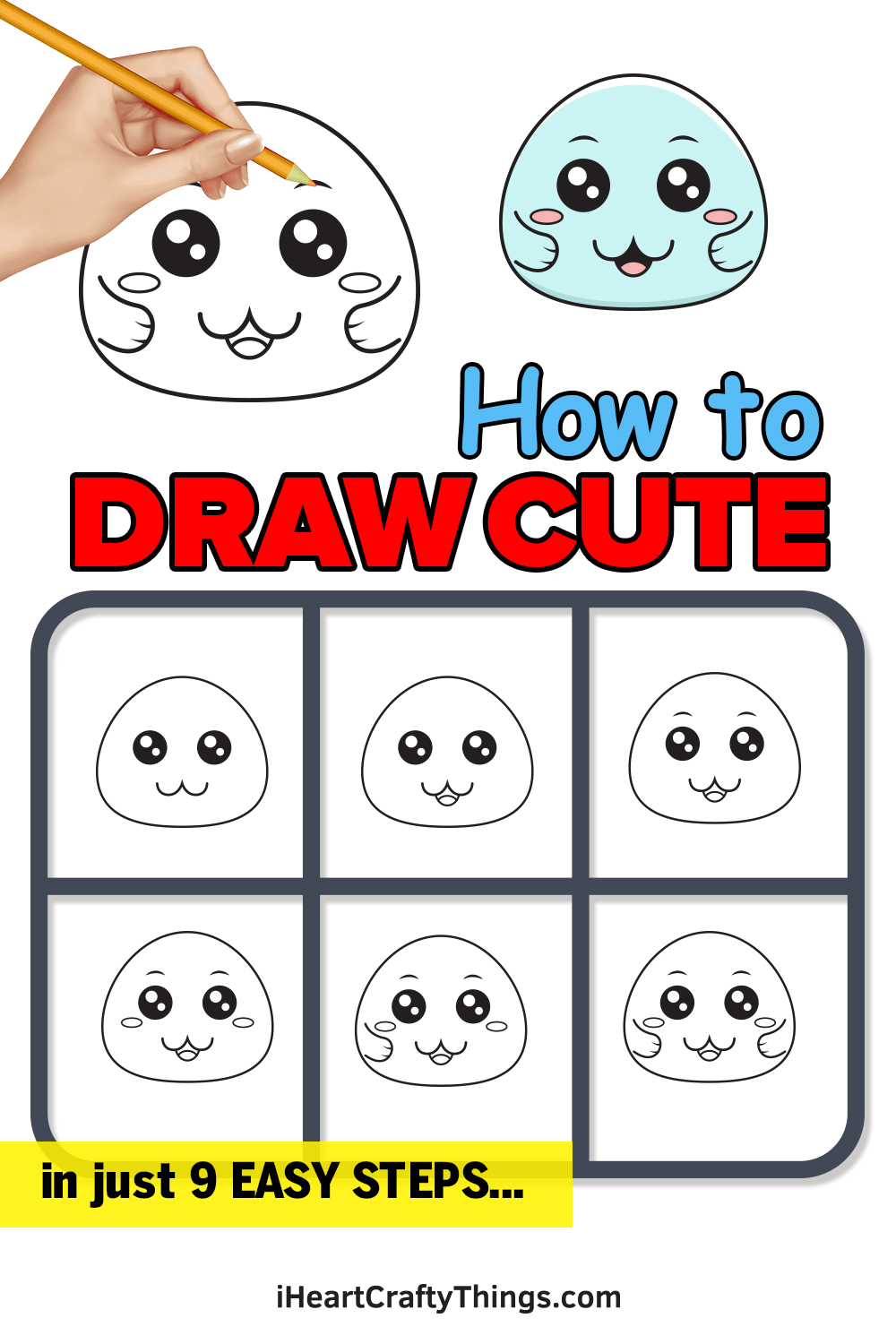