For the character of Cuphead, there certainly is more than meets the eye! On the surface, he’s a cute character from a charming video game that pays tribute to classic cartoons from the ’30s and ’40s.

This may be true, but the game he is from is also known for being brutally difficult, challenging even the most hardcore of gamers.

This game has also won this character many fans who would like to learn how to draw Cuphead to make their own fan art.

By the end of this guide, you will know how it’s done! We hope that you enjoy or step by step guide on how to draw Cuphead. 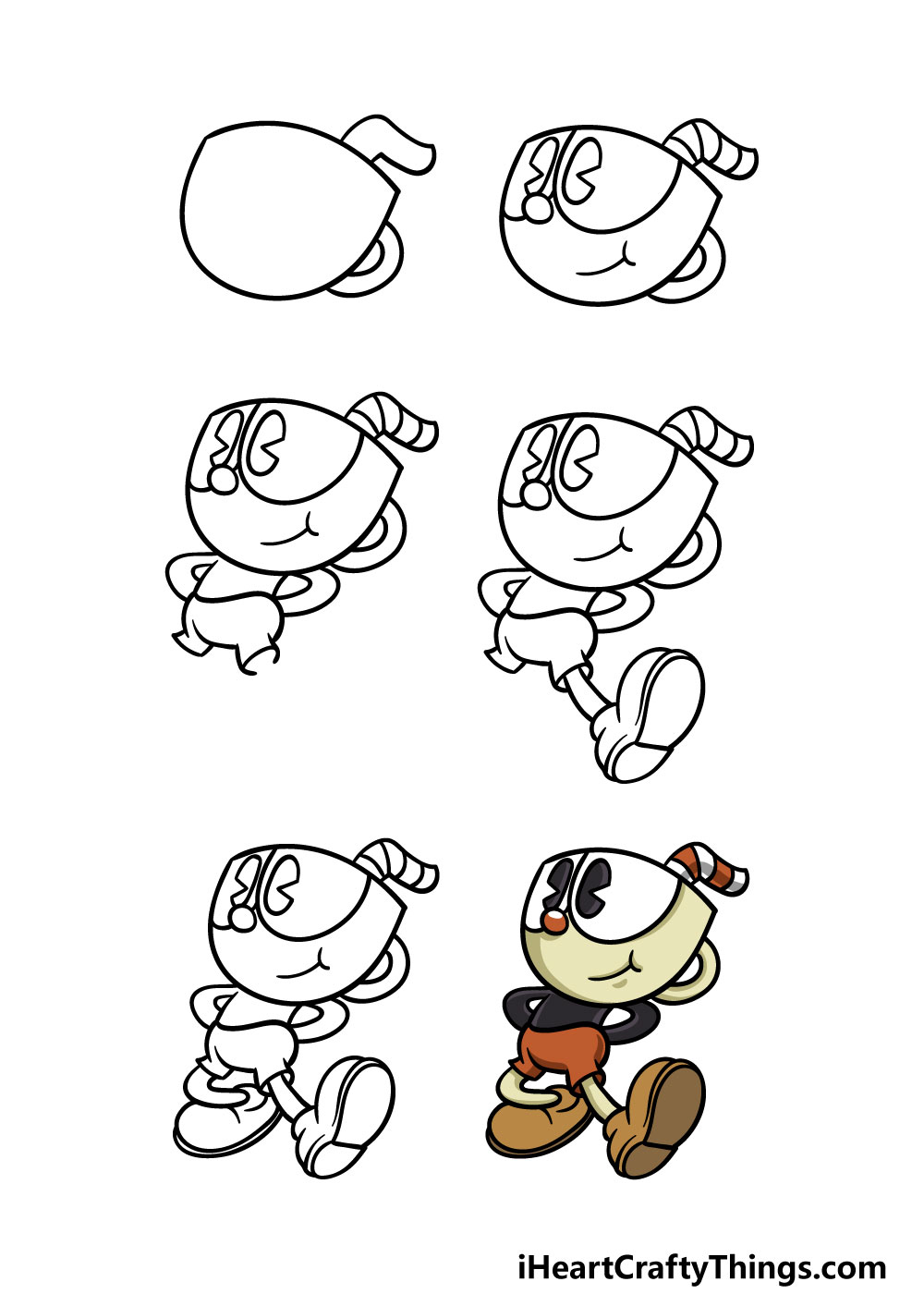 How to Draw Cuphead – Let’s Get Started! 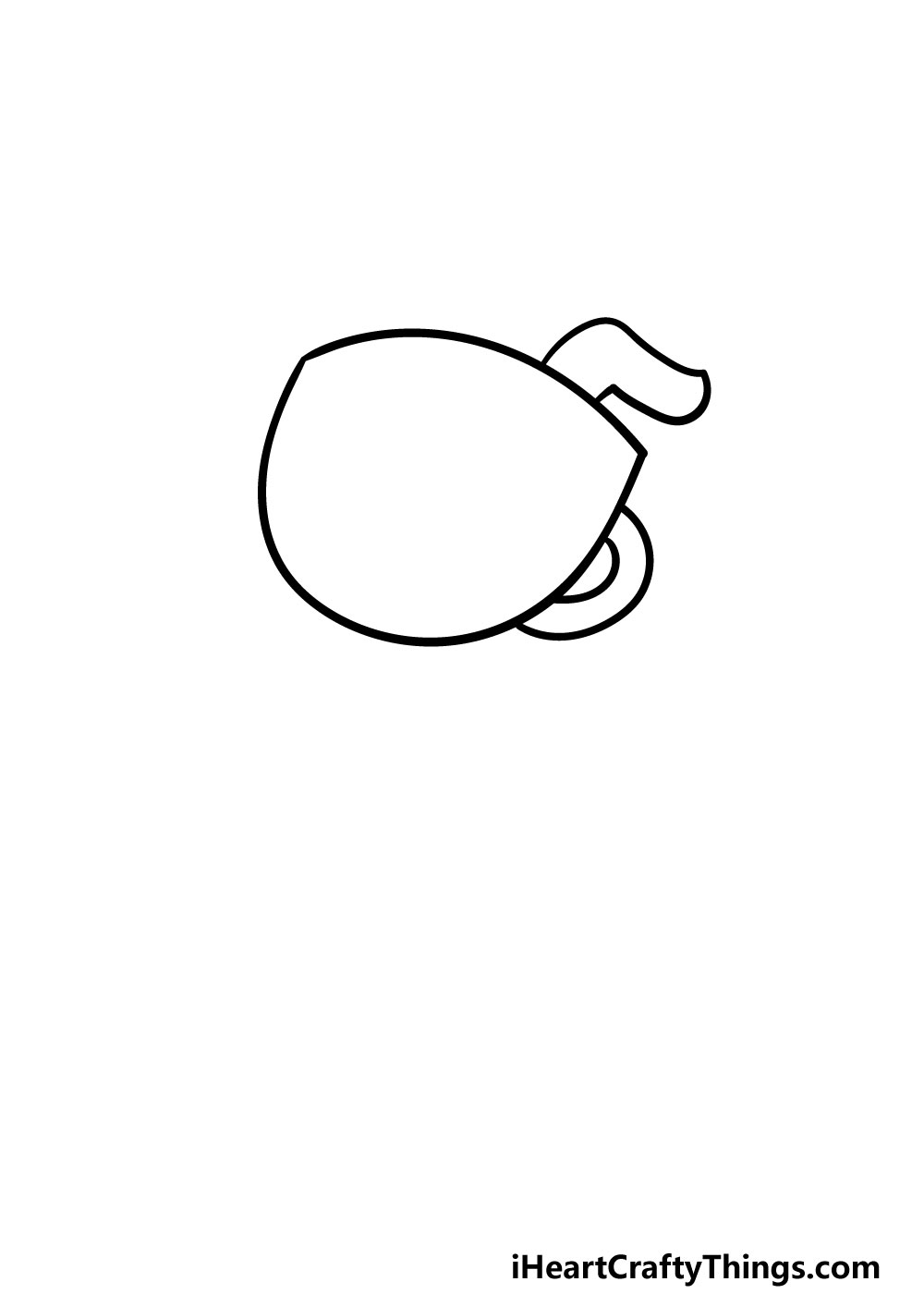 The origin of Cuphead’s name is no great mystery, as the first thing you’ll probably notice about him is the giant cup that he has for a noggin!

We will start with the outline for this head in this first step of our guide on how to draw Cuphead.

Then, we will use some more curved lines for the handle at his side. Finally, we will draw a bent straw coming up from inside of his head.

Step 2 – Then, draw some facial details 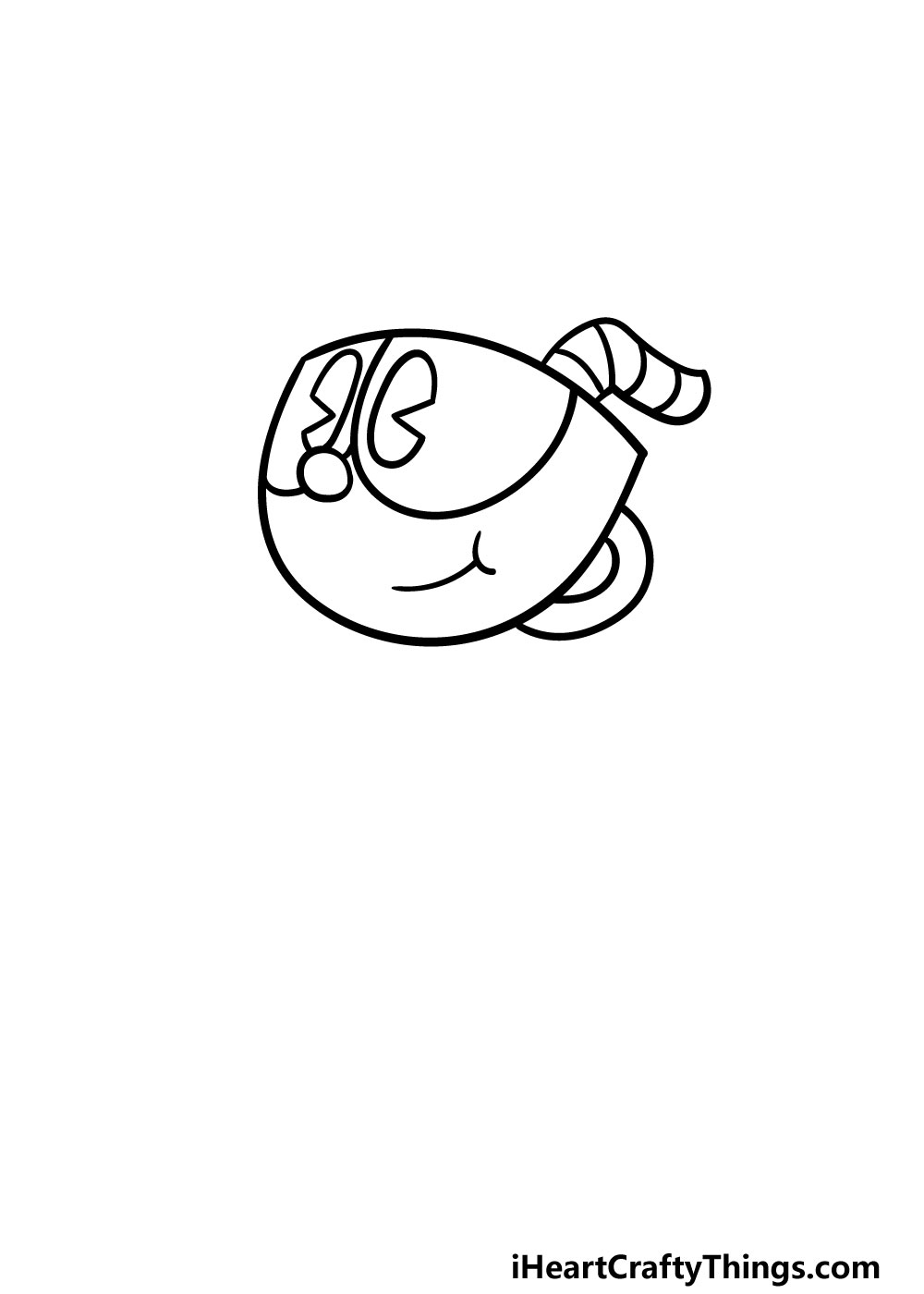 Next for your Cuphead drawing, we will be working on his facial details. You can start by drawing a small circular shape for his nose.

Then, you will use some curved lines extending down from the top of his head for the outlines of his eyes.

His pupils will then look like tall ovals with a slice out of them. These pupils are drawn this way as a tribute to how eyes looked in classic cartoons.

Finally, you can draw some stripes onto his straw before moving on.

Step 3 – Next, you can start drawing his arms and body 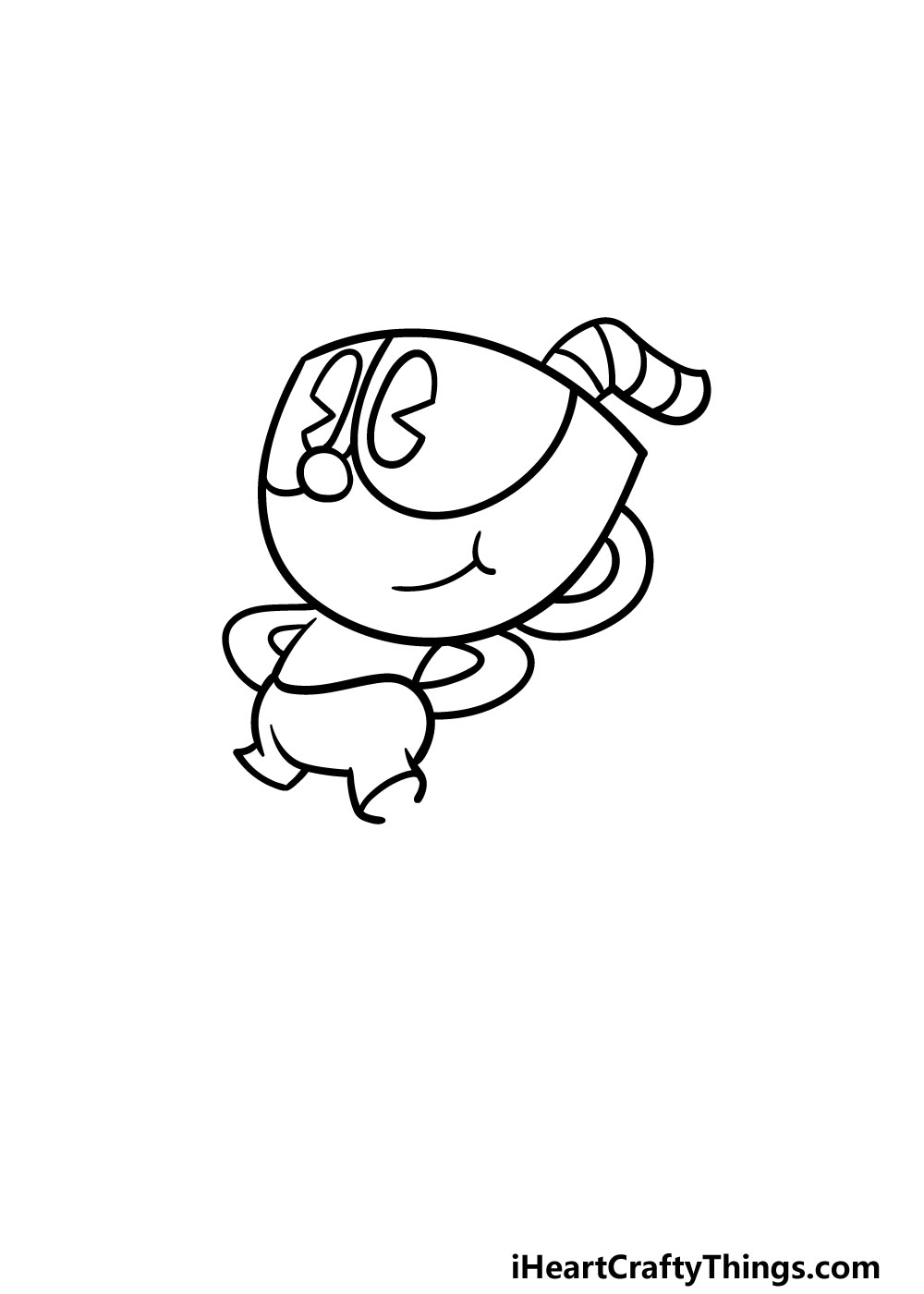 You’re making great progress in this guide on how to draw Cuphead! In this next step, we will start to draw his body.

First, use some curved lines from the base of his head for his hands that are behind his back.

Then, you can draw his narrow chest, and finally draw his trousers that are very round as well. There will be gaps where his legs will go, and we will add those in the next steps.

Step 4 – Add the first leg in this step 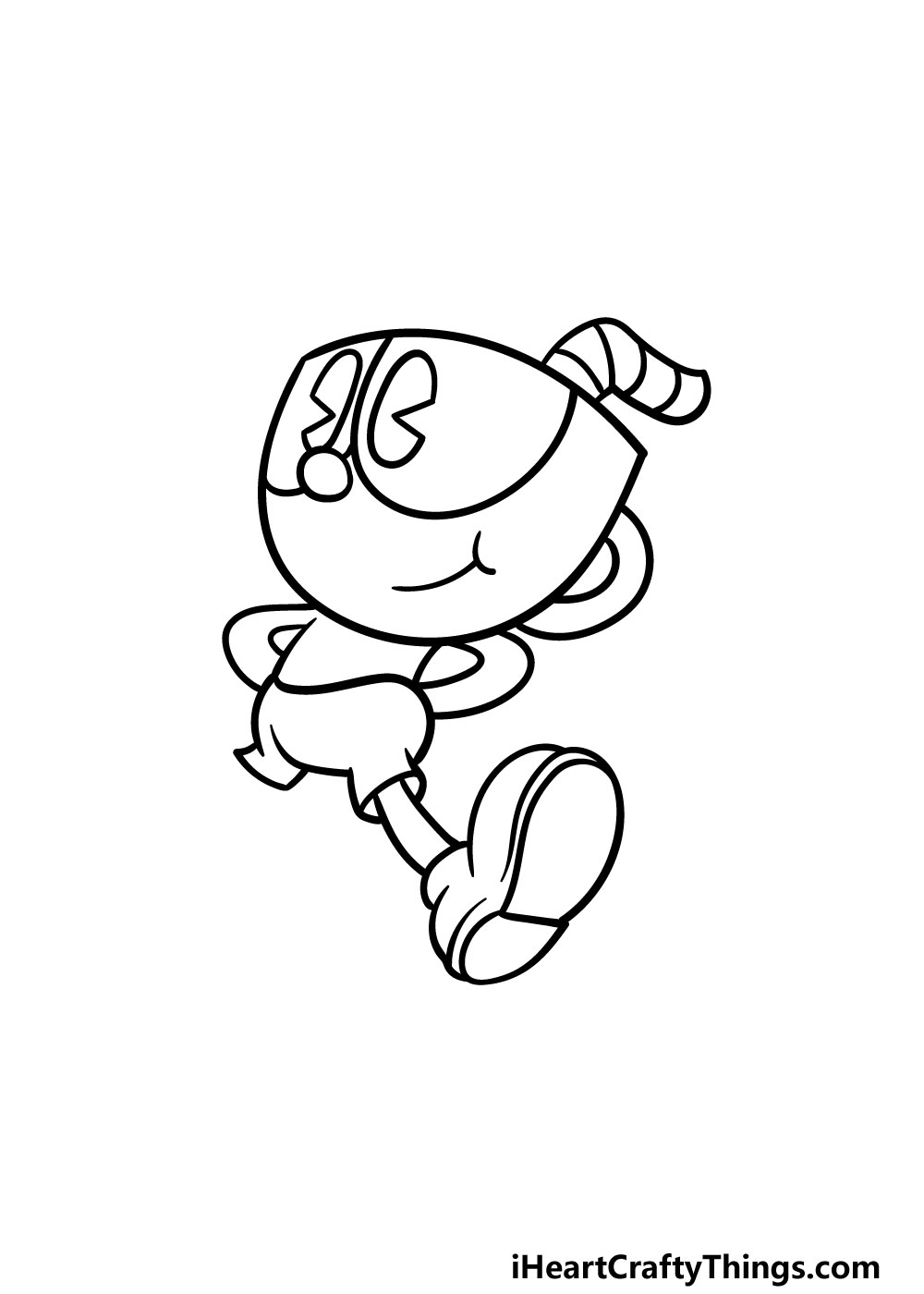 Cuphead does a lot of running and jumping in the video game, so we had better add some legs for your Cuphead drawing!

In this fourth step, we will add the first one on the right. First, use some slightly curved lines coming down from the opening of his trousers for his thin leg.

Then, we will be drawing his shoe. You can start by drawing the base of the shoe which will have two segments to it.

Finally, use some more curved lines for the top of the shoe to finish off this step. Then we can add the other leg and any final details in the next step!

Step 5 – Now, you can add some final details to your Cuphead drawing 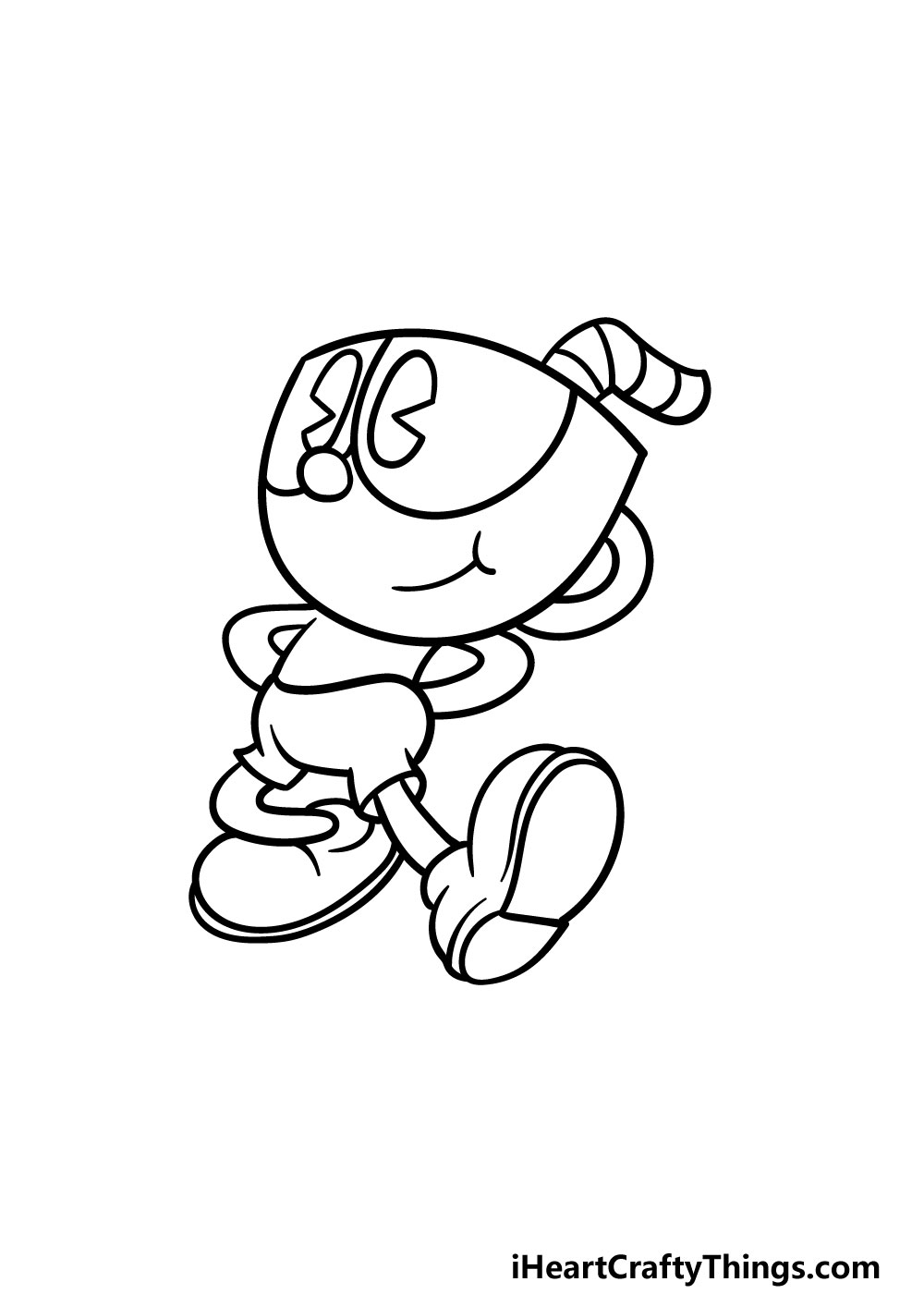 Iwe have just a few more details and elements to add in this step of our guide on how to draw Cuphead before you start to color him in!

We will be drawing the other leg in this step, and even though you drew one already, this one will look a bit different. The leg will be bent at a sharper angle this time, and we will only see the top of the shoe this time. With that leg drawn, that means that you’re ready to move to the final step!

Before you do, however, you can also add some more details of your own. You could add some objects from the game that he may interact with for one idea.

You could also look up pictures of Cuphead’s friend Mugman and draw him with his pal! If you have a favorite level or setting from the video game then you could also draw that for a cool background to this image.

What kinds of extra details and elements will you add to really finish off this image?

Step 6 – Finish off your Cuphead drawing with some color 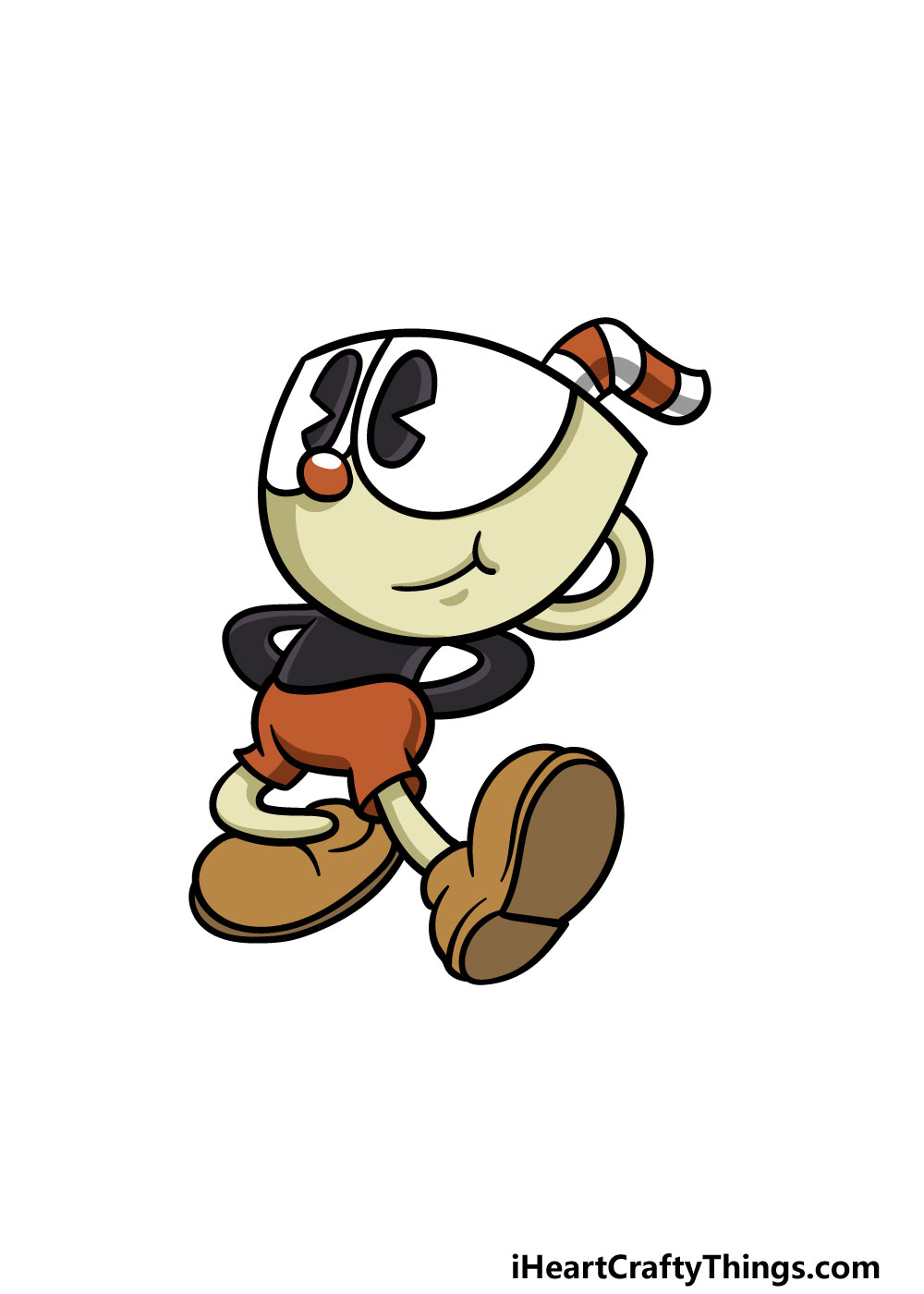 That brings you to the final step of your Cuphead drawing, and now you’ll get to have lots of fun as you color in your amazing picture!

In our reference image, we showed you the colors that Cuphead sports in the game, so you can use that as a reminder if you would like to keep his colors accurate.

You could also use some more colors of your own if you prefer! Another fun idea would be to color in this image to make it look like an old black and white cartoon.

You can also have some fun choosing which art tools and mediums you will use for this picture.

The video game has a more muted color scheme to it, as many of the characters and backgrounds were hand-drawn and painted.

If you would like to replicate this look, you could use watercolors or acrylic paints for that kind of look.

Anything you choose will look great, so what do you think you will use to color in your Cuphead drawing?

Do this to take your Cuphead drawing to the next level

These fun and easy tips for your Cuphead sketch will take this character to new heights!

In the Cuphead game and TV show, he is joined by his friend Mugman. This would be a great addition for this drawing of Cuphead that you have created.

Luckily, Mugman has a very similar design to his pal Cuphead, so you are already close to knowing how to create his design.

You could also use the game to help you with this second character design.

Looking up pictures of Mugman would also be very helpful. How would you pose him along with Cuphead to finish off this scene?

In the game, Cuphead has a few powers that he uses to vanquish his foes. Some of these are simple, such as shooting laser projectiles from his fingertips while some are more elaborate.

It could be fun to add some of these powers to your artwork! It could be as simple as drawing the simple laser from his finger or you could represent your favorite powerful move.

What power would you like to show off in this image?

While Cuphead is the star of his game and this Cuphead drawing, you could arguably say that the bosses you face in the game are the true stars of the show.

These bosses have become quite iconic, and you could add one or two to the drawing. You could pick your favorite Cuphead boss villain and then have them looming over Cuphead in the background.

The only question is which boss would you choose to feature in the image?

The bosses in Cuphead are not the only iconic aspect of the games, as the levels themselves are lavishly designed. You could use one of these stages for a background to your Cuphead sketch!

There are so many to choose from, so you would need to choose your favorite stage from the games to use as inspiration.

The stages have a painterly style, so you could use your paint tools to try recreate the feel of the stages.

Your Cuphead Drawing is Complete!

You have successfully reached the end of this guide on how to draw Cuphead!

We hope that you had a great time working on this drawing with us, and we also hope that this guide made it easier for you to recreate this character.

Now you can put your own spin on the drawing by adding some of your own details, elements and ideas. We can’t wait to see what you do!

When you’re ready for more, we have tons of amazing guides on our website! We cover a huge array of topics, including more awesome video game characters. Be sure to visit us often to never miss out! 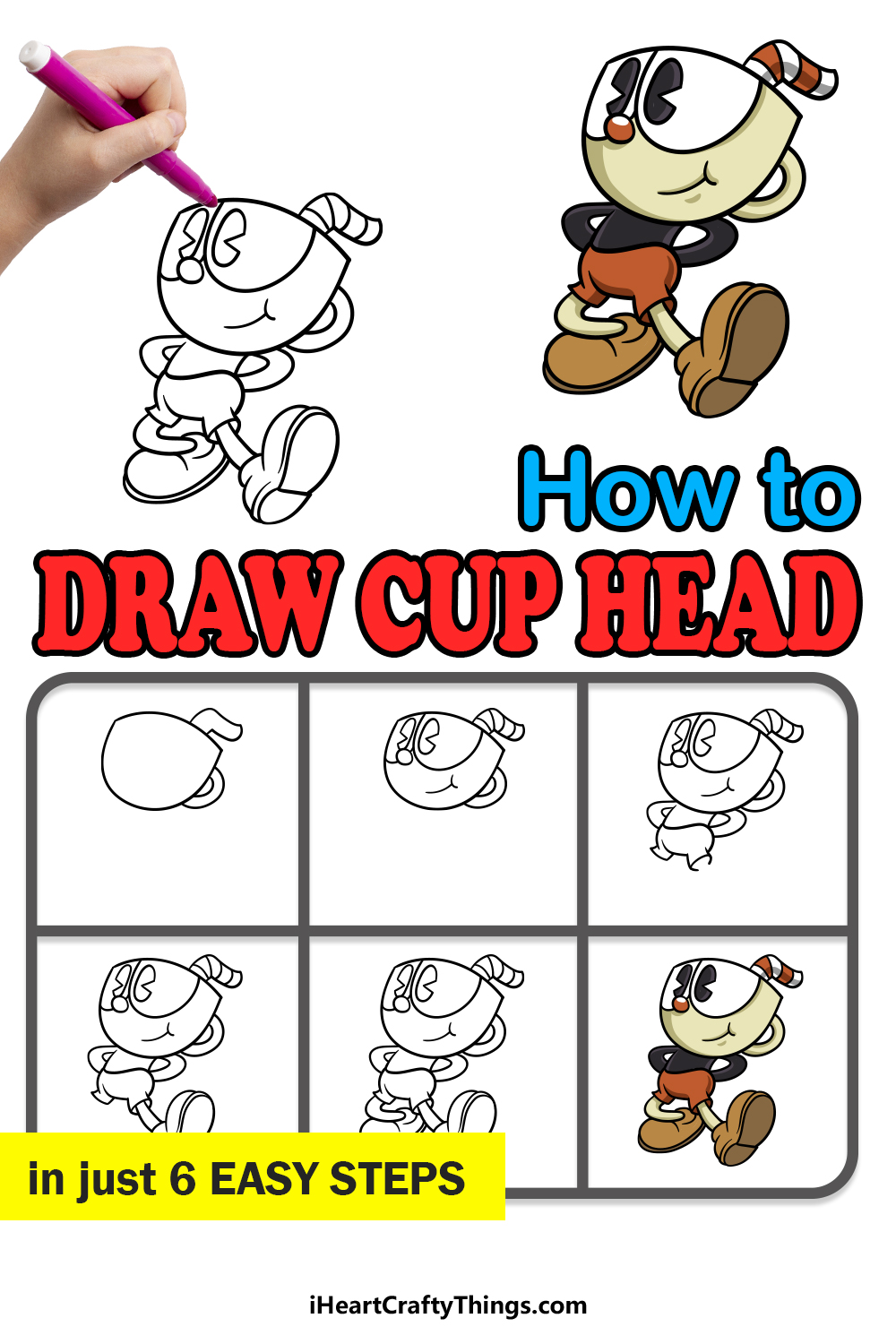 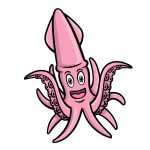 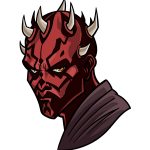