The animal kingdom is full of creatures great and small, and there is a huge amount of variety to enjoy!

The elephant is known as one of the largest animals in the world and is considered the world’s largest land animal.

It has been a commonly featured animal in many different artworks, and we have a really cute interpretation for you to replicate as you learn how to draw a cartoon elephant!

This version of an elephant we will work on is really quite adorable, and we can’t wait to show you how fun and easy it can be to draw it!

So get ready to have a great time as you work on this step-by-step guide on how to draw a cartoon elephant in just 6 easy steps! 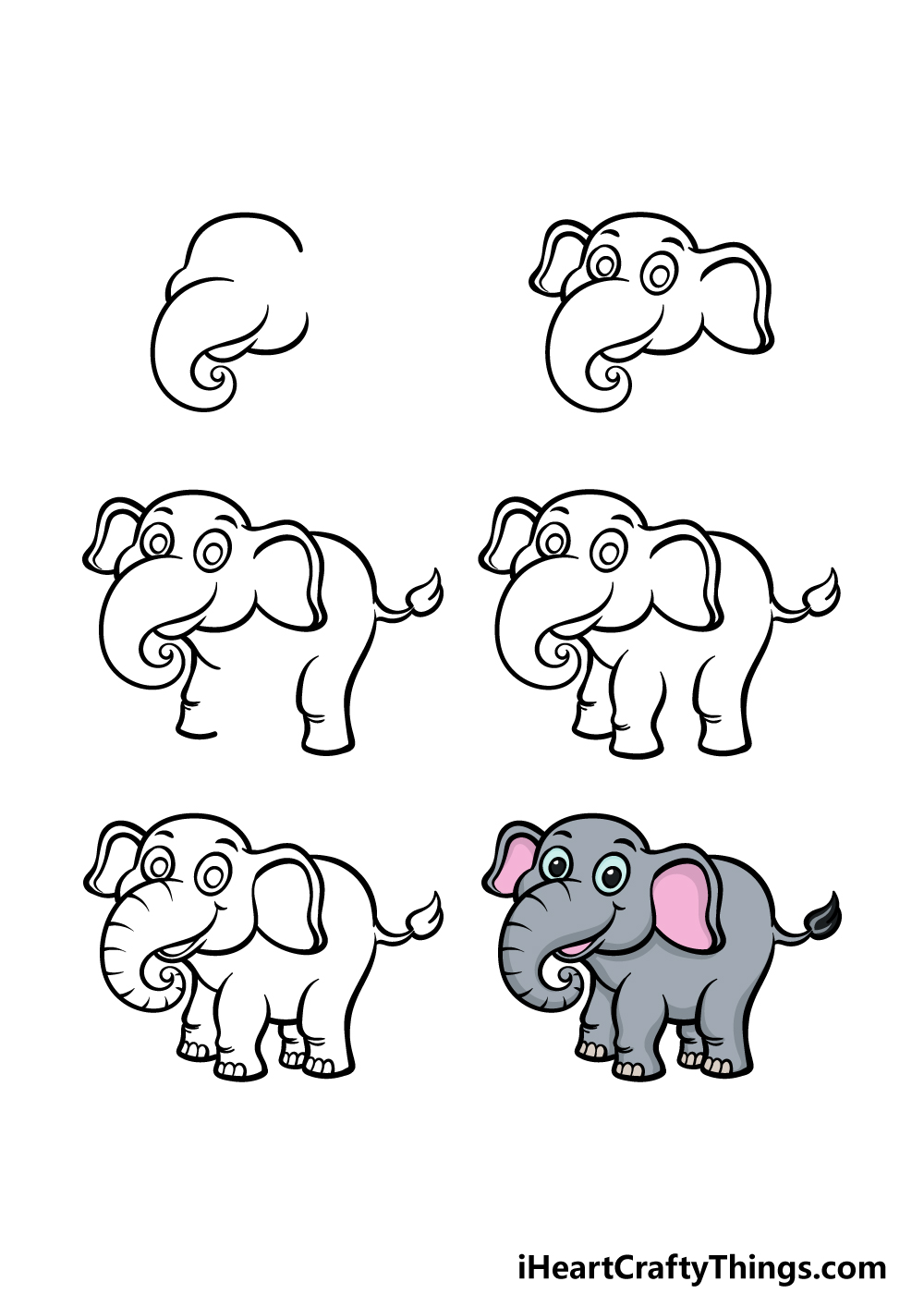 How to Draw A Cartoon Elephant – Let’s Get Started! 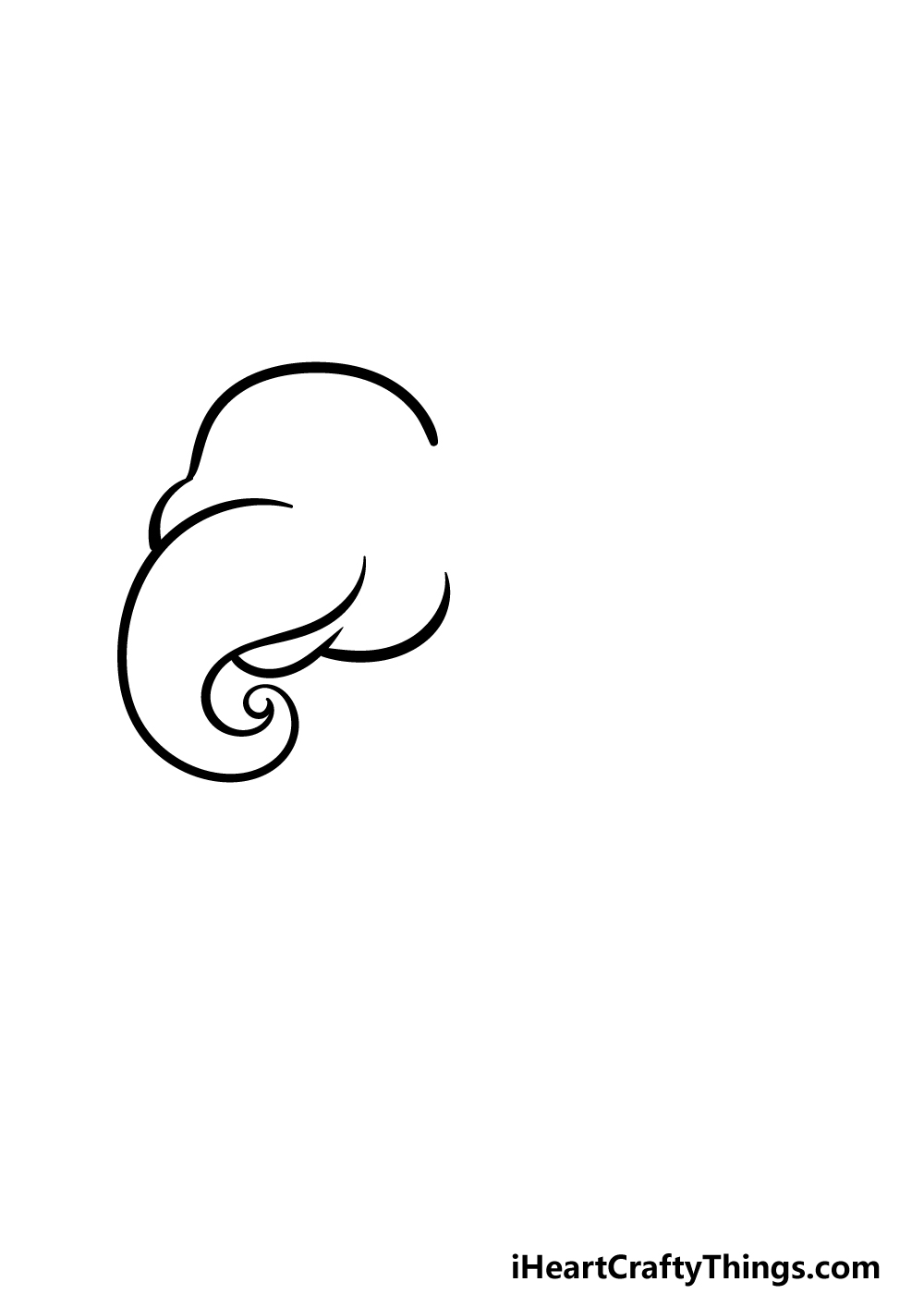 For this first step of your cartoon elephant drawing, we will begin with the head and what may be the most recognizable aspect of an elephant: the trunk!

First, we will use some curved lines for the top and base of the head.

Then, you will be able to add the trunk to the face. The trunk will be drawn using some curved and spiraling lines, and it will get quite twisty near the end as it curls up.

As you can see in our reference image, it will also have a smiling mouth worked into it. That’s all there is to it for this step, and then we can move on to the next step of the guide! 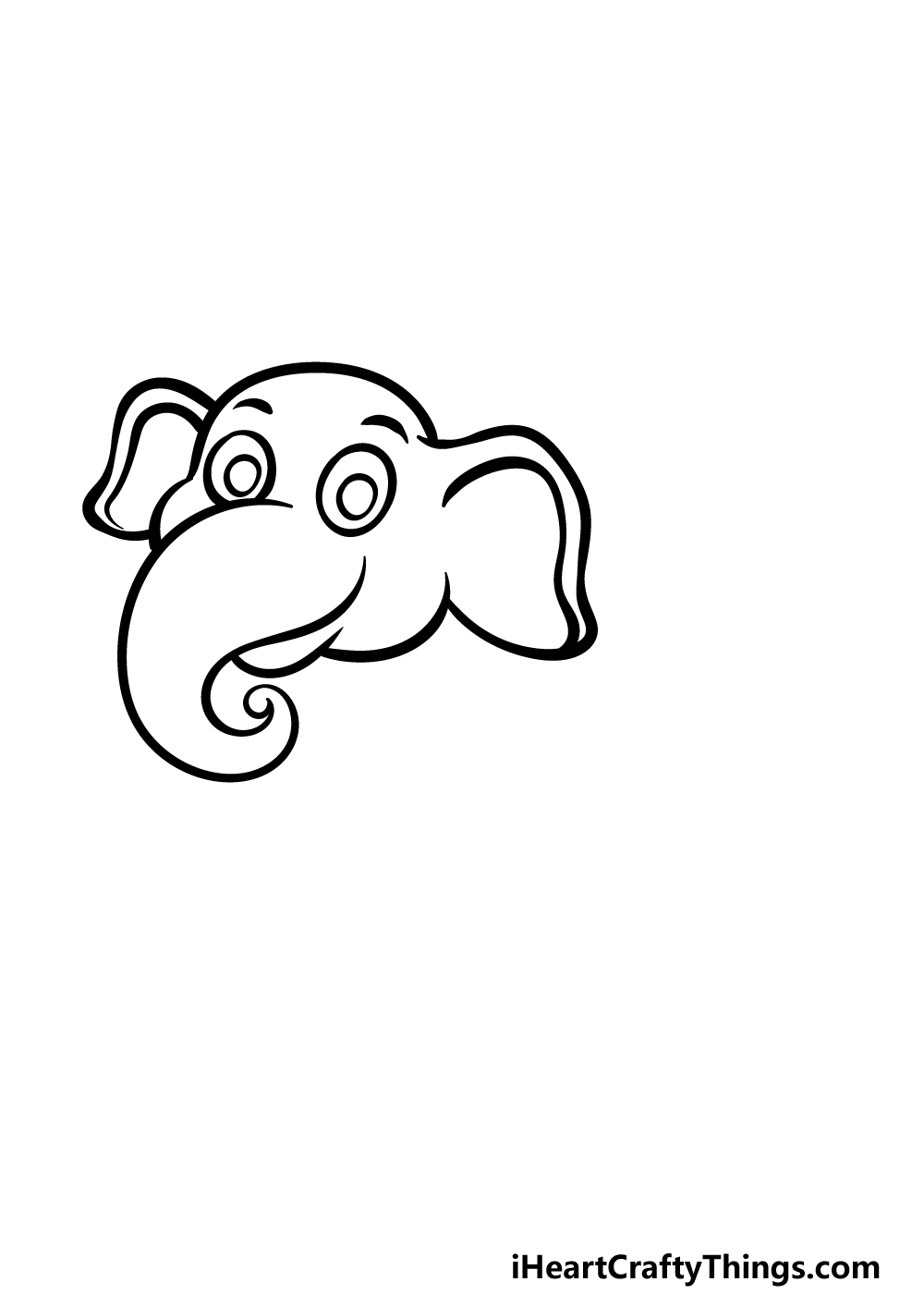 In this second step of our guide on how to draw a cartoon elephant, we will add some facial details and the rest of the head outline.

To begin this process, we will begin by adding the ears onto the sides of the head. An elephant’s ears are quite large and rounded, and they are quite flappy on the side of the head.

They will also have some curved inner ear sections inside of them.

Then, you can draw some eyes by adding some ovals inside the face, and then you can add a smaller oval inside each one. Finally, draw some thick eyebrows over the eyes to conclude this step.

Step 3 – Next, start drawing the body for this cartoon elephant 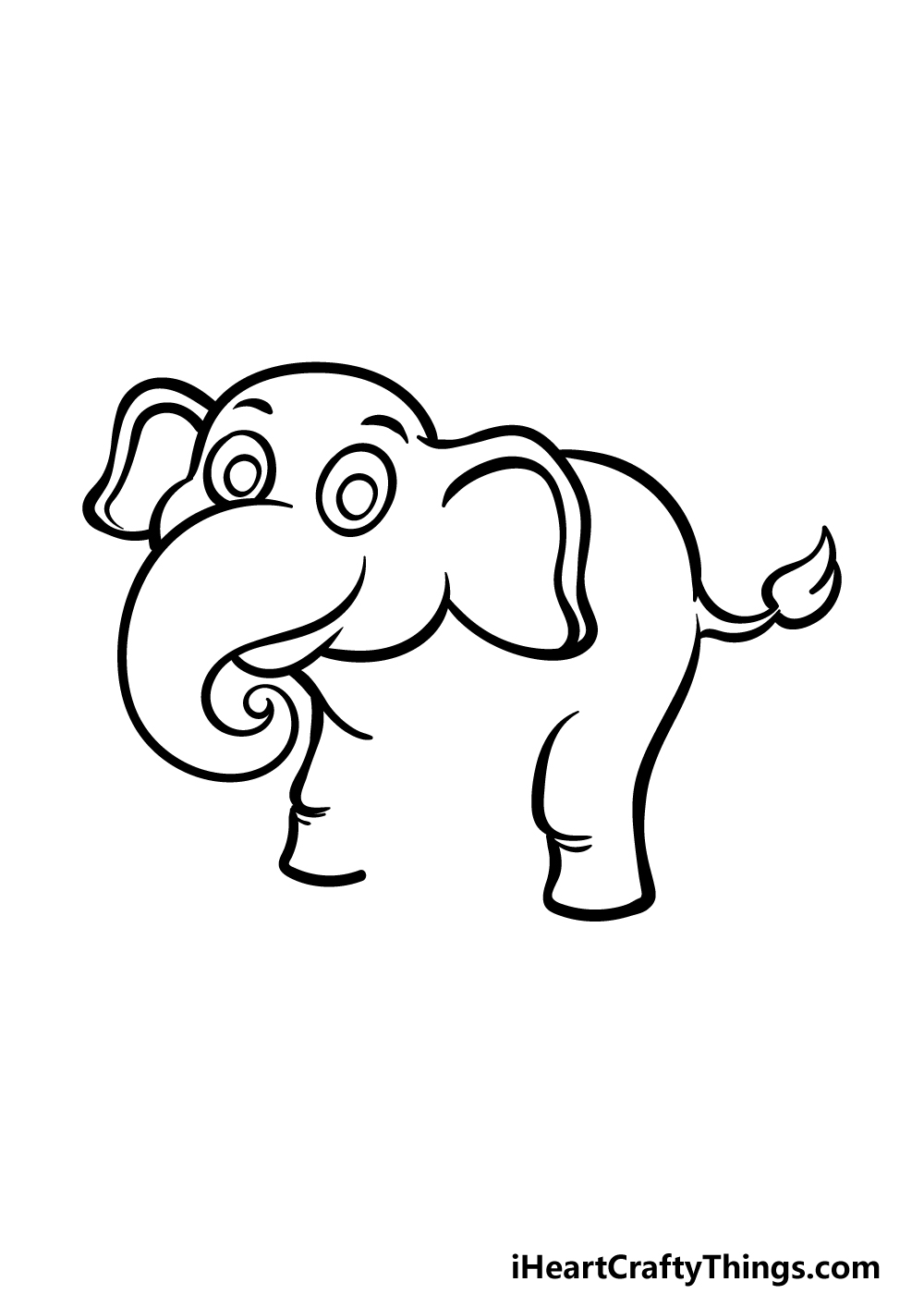 This third step will be focused on starting the body and leg outlines for this cute little elephant! To start, add a rounded line coming from behind the ear.

A wavier line will be used for the chest coming down from below the face. Then, we will draw the start of a front leg and the first back leg.

These legs will be drawn using some curved lines with some lines where the knees bend. Finish off with a small tail that has a large tuft of hair at the end.

Step 4 – Now, draw the next leg for the elephant 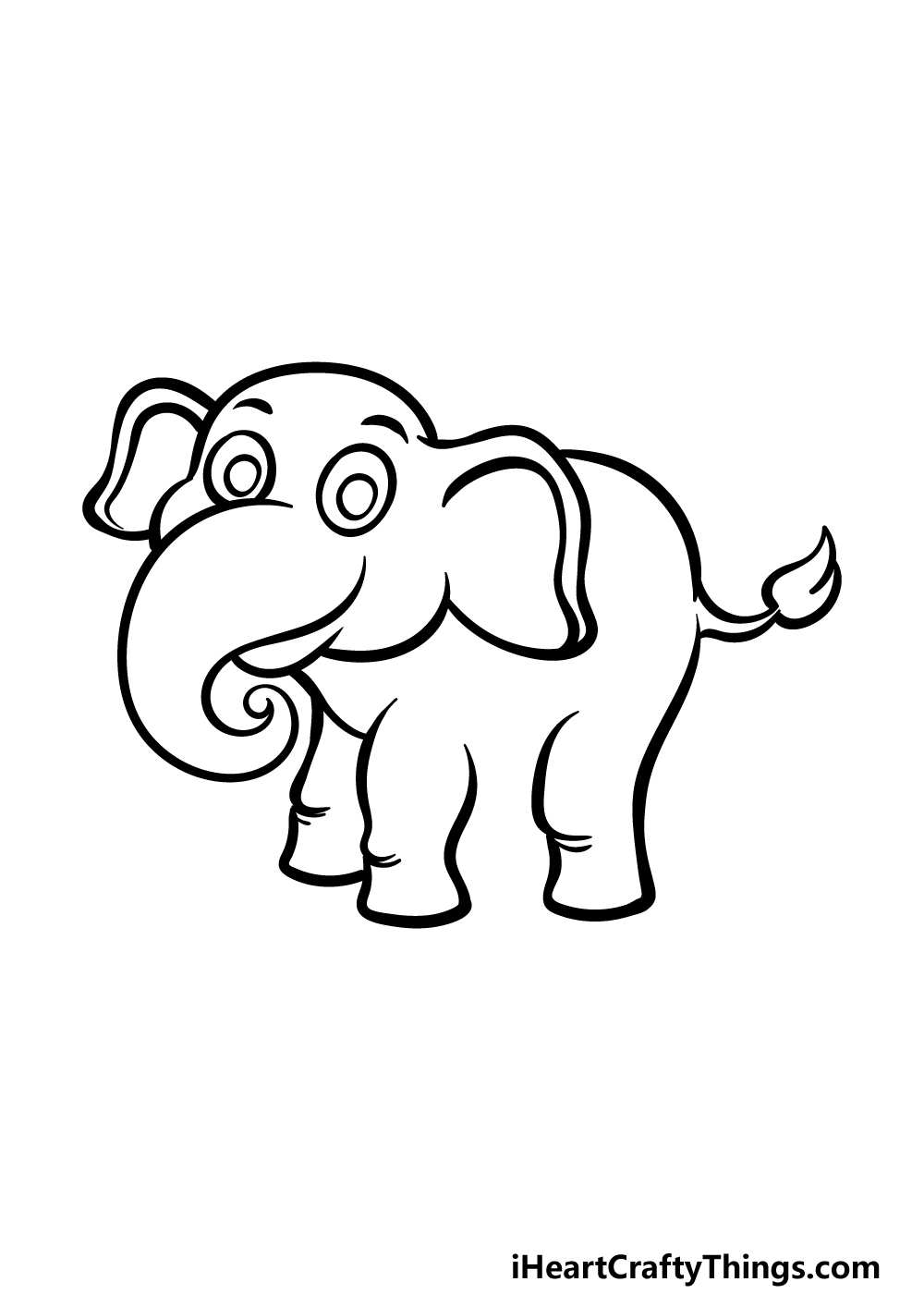 Your cartoon elephant drawing is really starting to take shape now! You have added two of the four legs so far, and in this one we will add the second front leg.

When adding this one, you will see why we left the right edge of the first front leg blank in the previous step.

This one will cover that empty space, and it will be pretty similarly shaped to the previous ones.

You’ll notice that there is an empty space where the belly should be, but we’ll fill that in along with any final details in the next step. 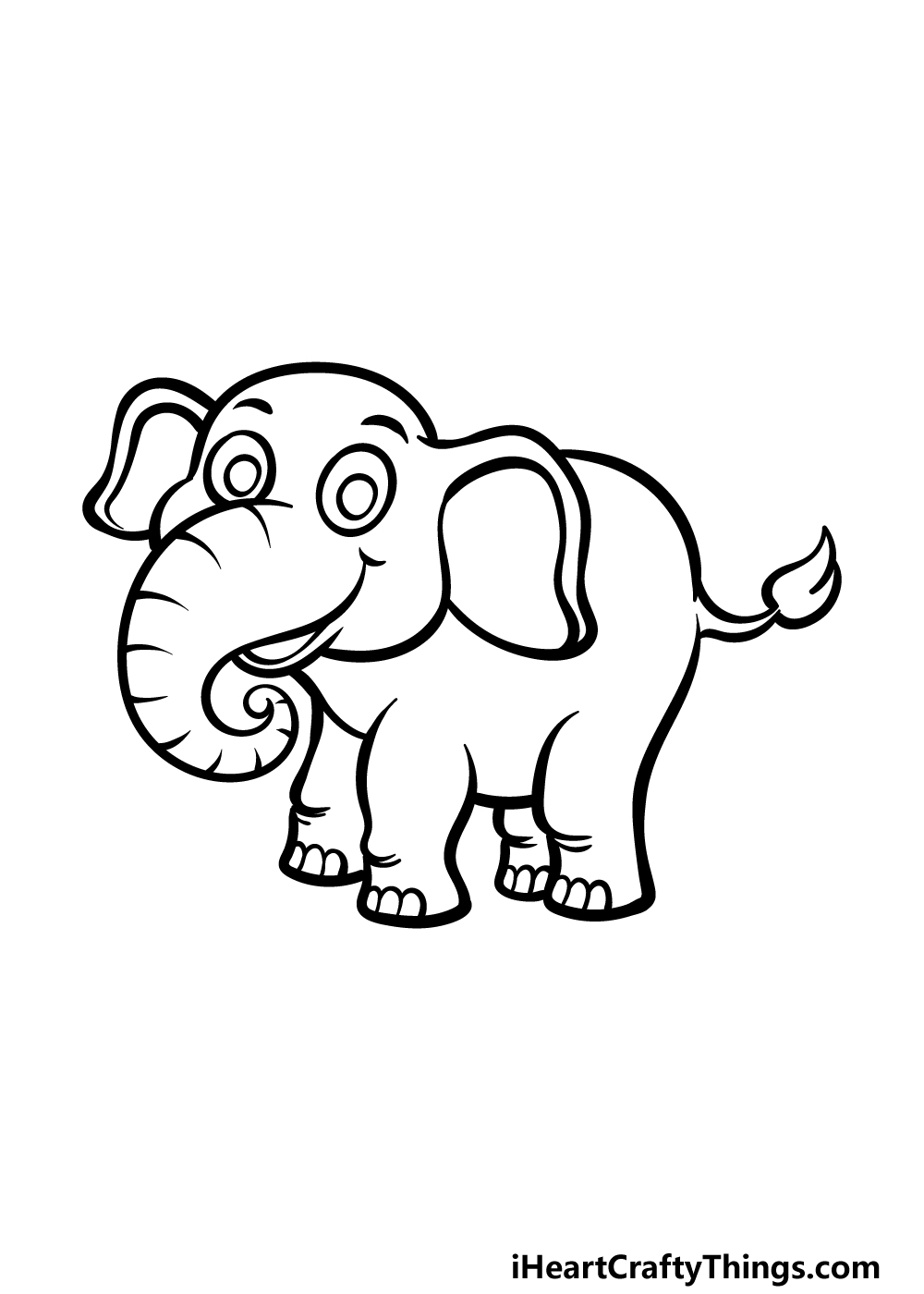 There are a few final touches to make this drawing look even better before we add some colors in the final step of this guide on how to draw a cartoon elephant!

We will be adding quite a few details in this step, but they are all pretty small and simple. All together they will make quite a difference though!

First, draw some lines across the trunk to make it look more textured. Then, use a curved line for the mouth of the elephant.

Next, we will finish off by adding a row of three rounded toenails onto each foot. Then, you’re finished and ready for the next step!

You don’t need to stop there, though. You can also add some of your own details or even create a fun background setting. You can then color these additional elements in the next step as well! 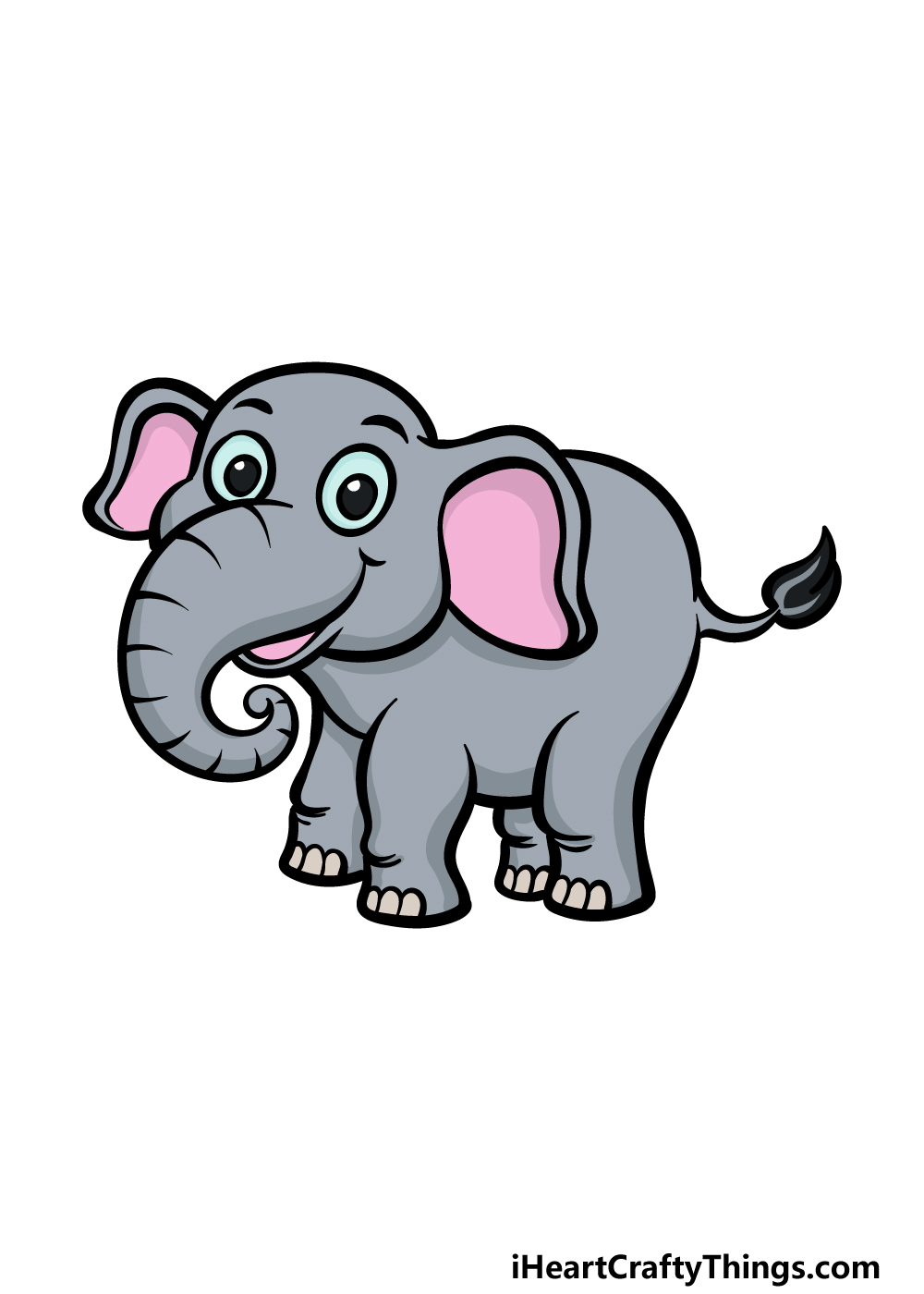 Elephants aren’t exactly known for being super brightly colored animals, but there is still fun to be had as you finish off the colors of this cartoon elephant drawing!

We primarily went with greys for the sin of the elephant, but you’ll notice we went with different shades to create some shading.

For some brighter colors, we used some lovely pinks for the inner ears and mouth.

You could use our color choices as inspiration for your own image, but don’t be afraid to add your own choices as well!

Which art mediums and tools do you think would best suit this drawing?

We would probably go for colored markers or maybe some acrylic paints, but there are so many awesome options to choose from!

5 Tips To Make Your Cartoon Elephant Drawing Even Better!

Make this adorable cartoon elephant sketch look even better with these tips!

That means that you could add as many cute elephants to this drawing as you like. They could also all be in fun unique poses to create a charming scene!

Adding another elephant or two would be a great way to populate this image, but there are other ways to do so. One would be adding some other animal pals to hang out with your cartoon elephant.

This would be a fun way to show off all of your favorite animals, and you could draw them in a similar cartoon style!

It would be super cool to have an elephant as a pet, and you could show what this could be like by adding yourself to this cartoon elephant drawing!

This would be a fun challenge, as you would have to turn yourself into a cartoon character. If that sounds too daunting, then you could add an existing cartoon character instead if you prefer.

Earlier we mentioned adding another cute cartoon elephant to the picture, but you could also create s lovely scene by adding an adult elephant.

It would be similar to the design of the baby elephant but much larger!

There would be a few differences in the detail, but you could also look up some images online to help you if you want to try this.

Finally, you could finish off your cartoon elephant sketch with a background setting. There are so many fun possibilities!

One would be to draw the cartoon elephant in its natural habitat. Or, you could go for something more creative and show it in your living room.

These are just two ideas, but you could show off where you think this cartoon elephant could be hanging out!

Your Cartoon Elephant Drawing is Complete!

This has to be one of the most adorable elephants we have ever seen, and we hope that you had a great time drawing it in this guide on how to draw a cartoon elephant!

The steps in this guide really show off how easy it can be to take on any drawing when you have some smaller steps to follow.

But why stop there! You can keep the fun going by adding some more details of your own or by creating an awesome background setting for this elephant to be in.

Then, the next way to keep the drawing fun going is by checking out more of the amazing drawing guides we have for you on our website.

We plan to bring out many more, so keep checking in to never miss out!

Lastly, when you’re ready to show off your finished cartoon elephant drawing, you can do so by sharing it on our Facebook and Pinterest pages for us to check out.

We really can’t wait to see how it turned out! 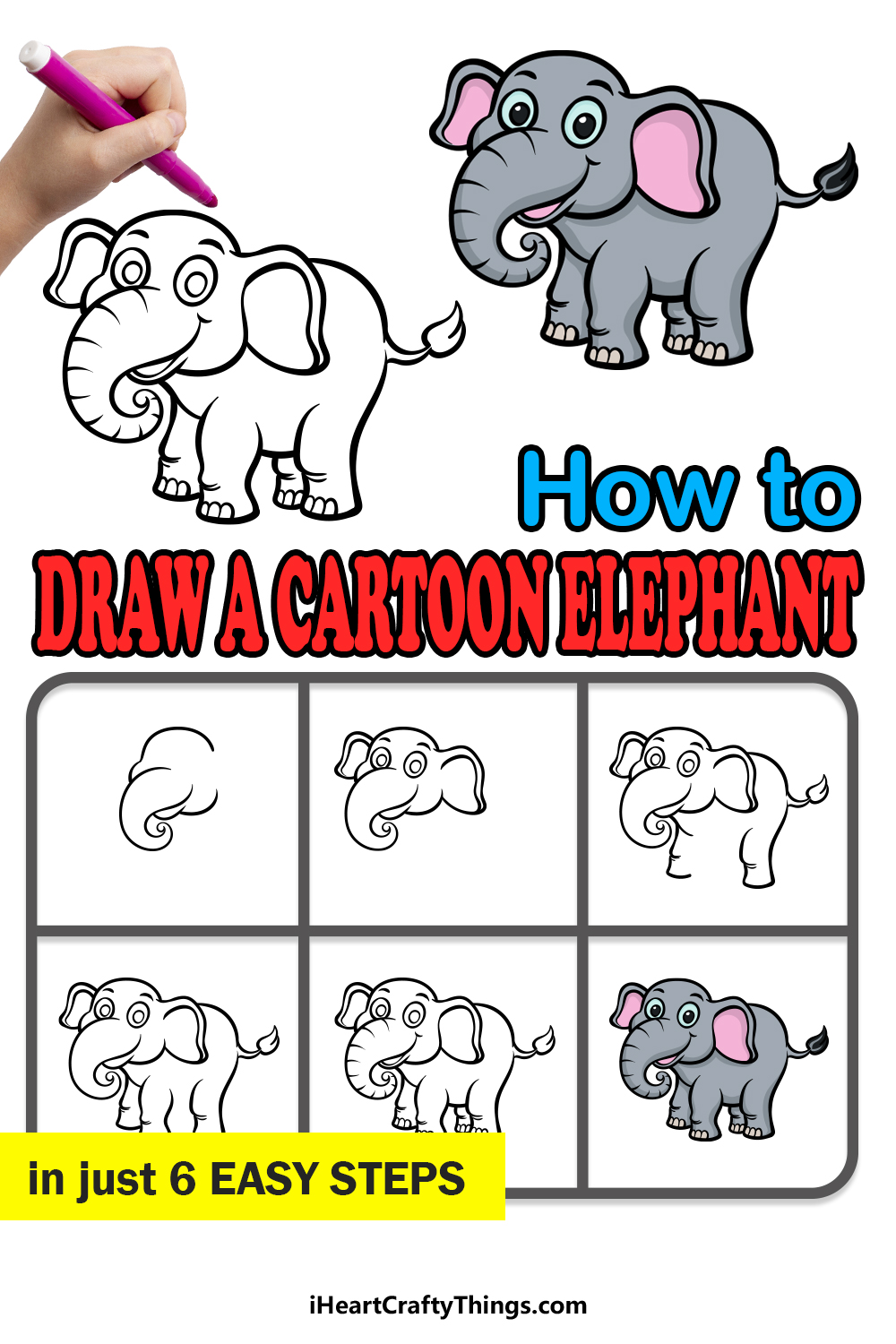 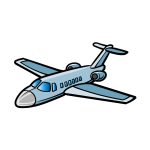 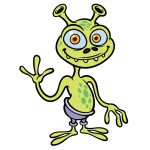