Stories and myths from around the world are filled with many incredible mythological creatures to behold, and these creatures really capture the imagination!

Dragons are one of the most popular fantasy creatures, and they’ve shown up in many different cultural myths and stories along with countless stories across all mediums.

Learning how to draw a cartoon dragon is a great way to represent this incredible creature!

By the end of this guide, you will know everything you need to know about drawing this awesome cartoon dragon easily and while having tons of fun!

Get ready for a creative fantasy adventure as you embark on this step-by-step guide on how to draw a cartoon dragon in just 6 fun and easy steps! 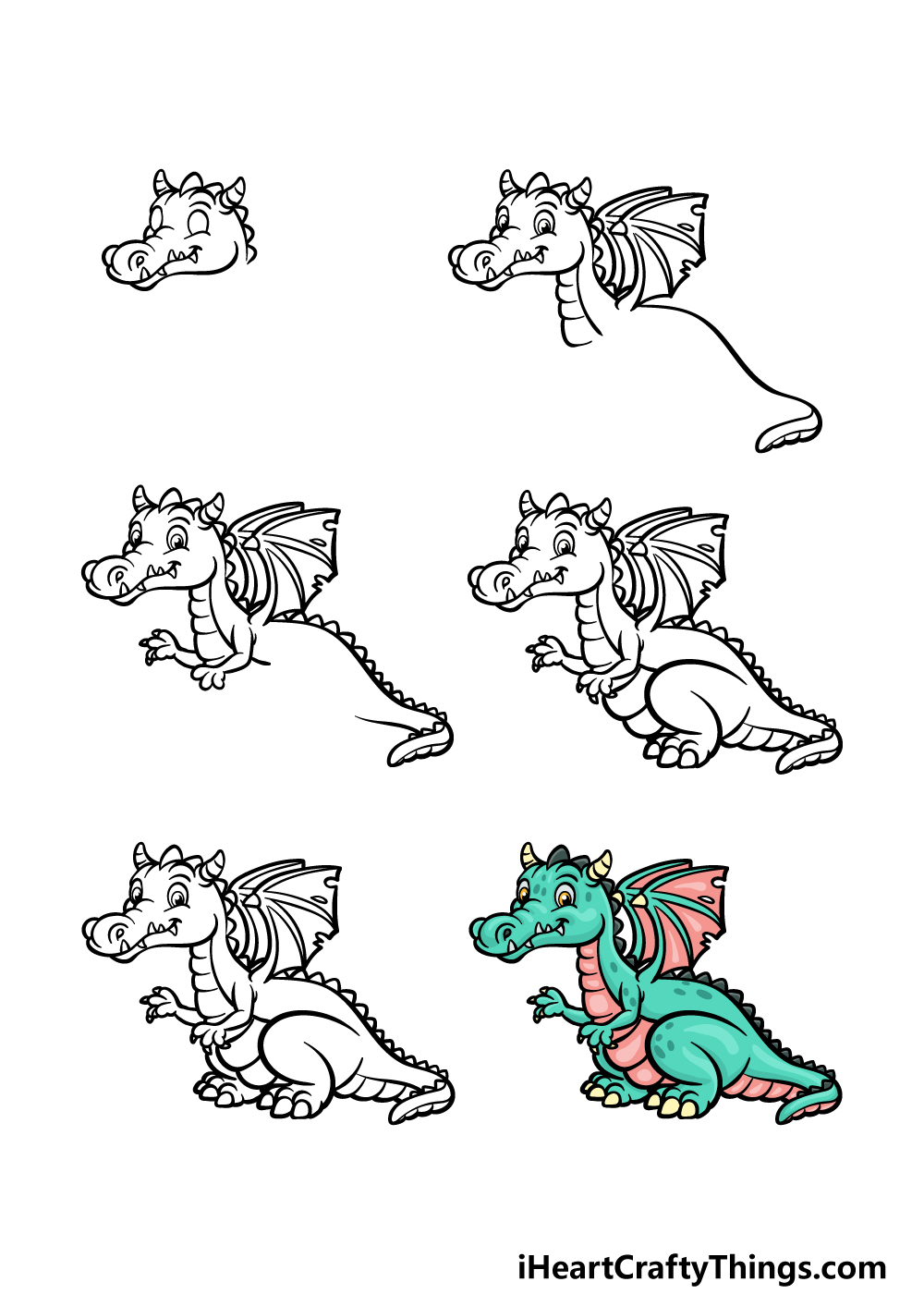 How to Draw A Cartoon Dragon – Let’s Get Started! 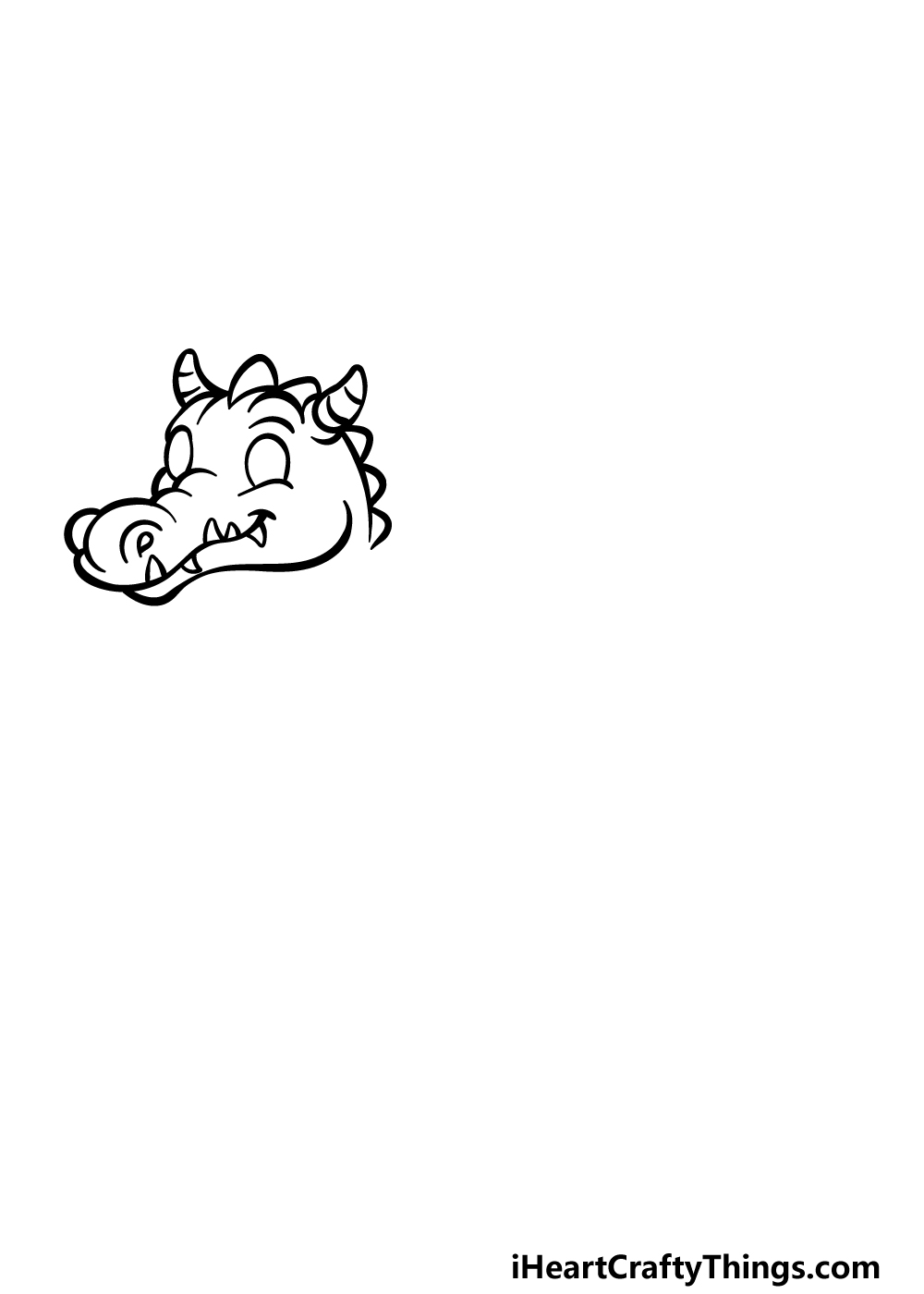 Let’s begin this guide on how to draw a cartoon dragon with the head of the dragon! Dragon designs are often inspired by real reptiles and animals, and this one has a face not unlike a crocodile’s.

You can begin this design by drawing some oval shapes for the eyes of the dragon. These will have some lines above and below them to add to the facial expression.

The snout of the dragon will be drawn using some smaller curved lines to give it a bumpier look.

The mouth itself can be drawn as a wavy line to give it a smile, and there will be several pointy teeth poking out of it.

Finally, you can finish off by drawing a curved line for the jaw and then add some details such as the nostrils, horns and spikes on the back of the neck. 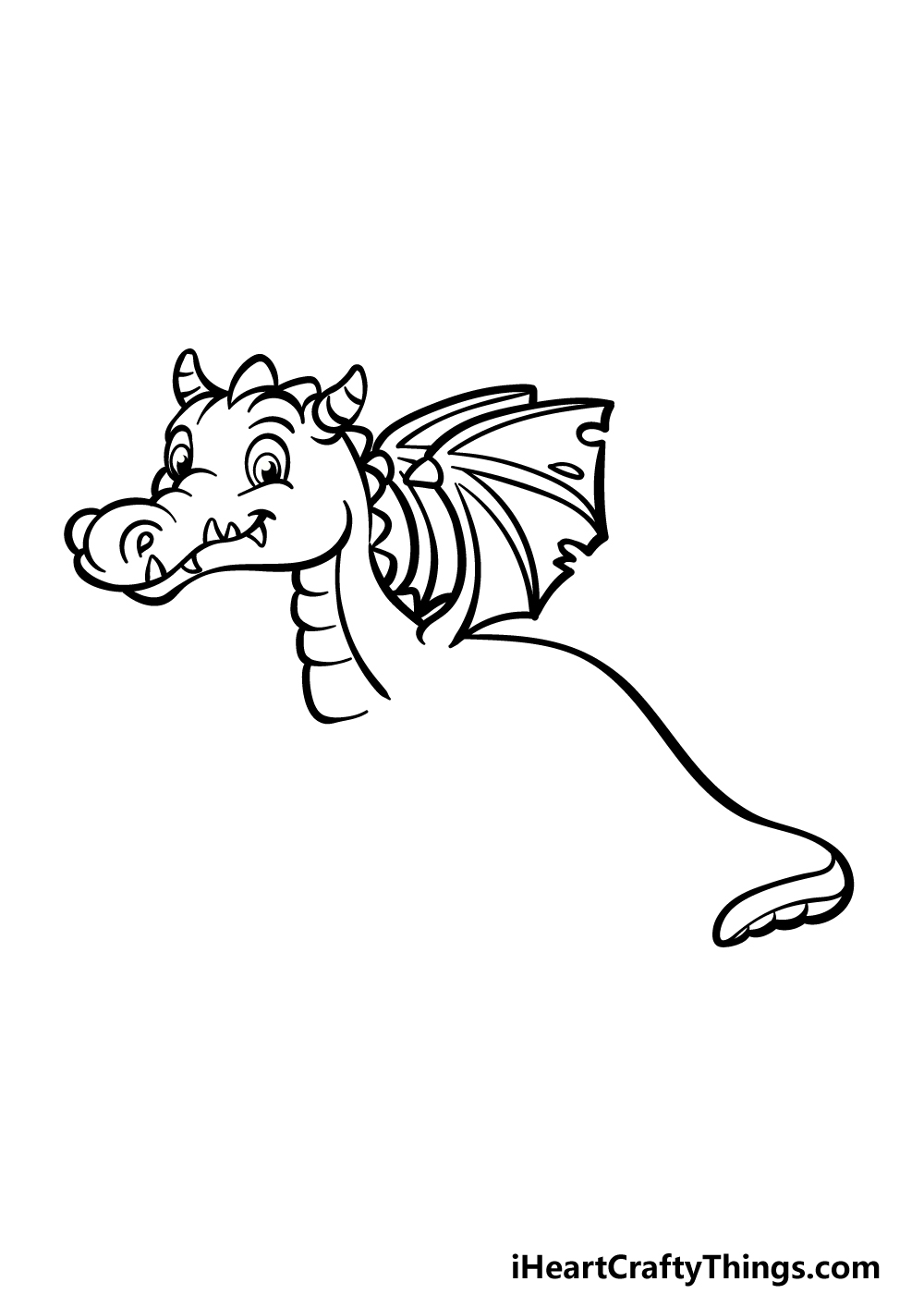 We will be adding quite a lot to your cartoon dragon drawing in this second step! First, add some round shapes for the pupils inside of the eyes to finish off the face for now.

Then, draw the bumpy underside of the neck. This will later extend to the armored belly of the dragon, but we won’t add that for now.

Next, we will be adding the wings of the dragon. These are rather similar to a bat’s wings in that they have a solid frame with leathery parts in between.

When those are done, draw a curved line for the back and the tail curling over. Then it’s on to step 3!

Step 3 – Next, draw the arms and spikes on the back 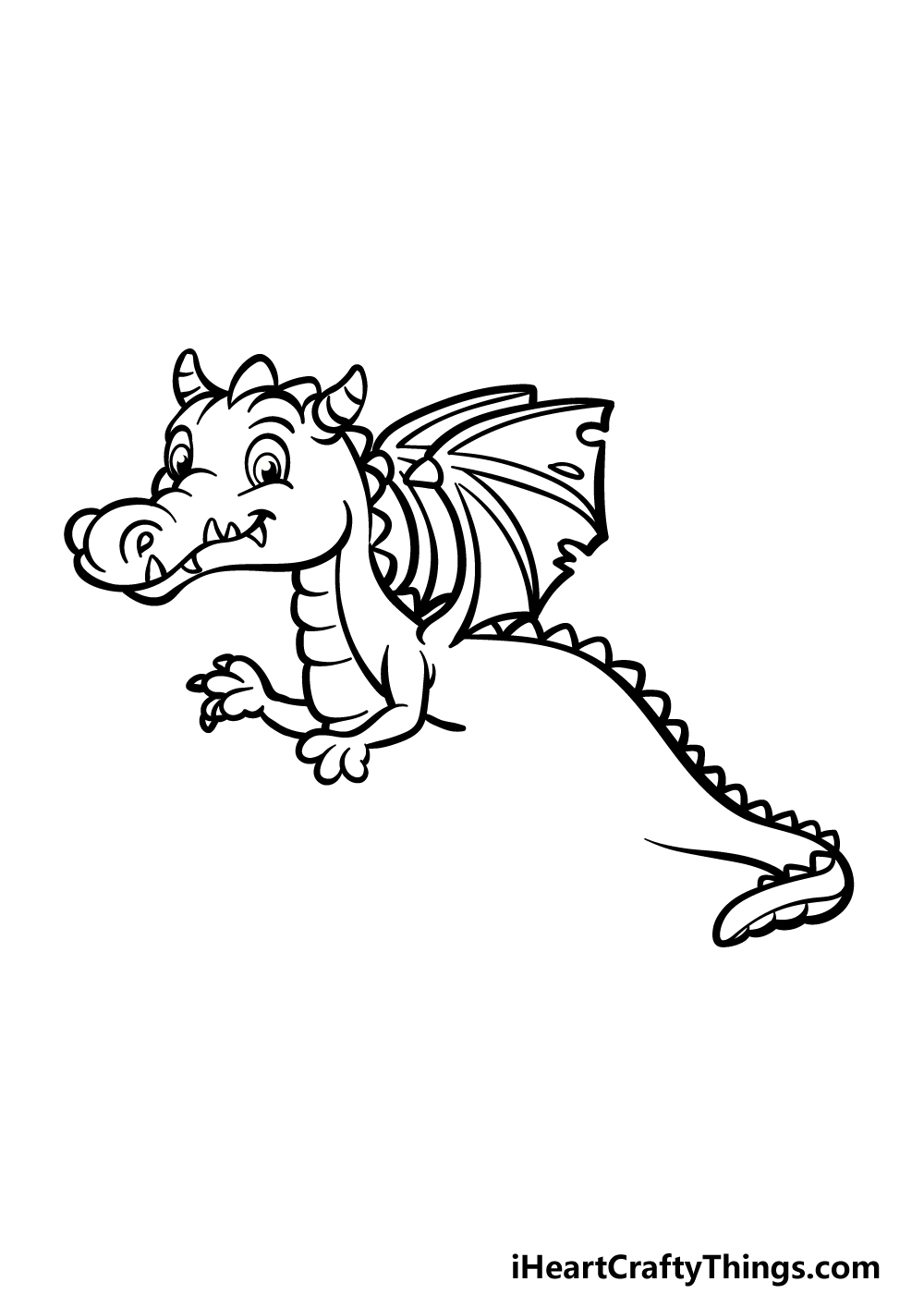 For this third step of this guide, we will be adding some arms and spikes onto the back of the dragon.

The arms look a bit like the arms of a tyrannosaurus, and they are rather small compared to the rest of the body.

We will then be making this dragon look even more like a reptile by adding some pointy triangular spikes onto the back. That’s all there is to it for this step, so let’s proceed.

Step 4 – Now, add the first leg and the belly 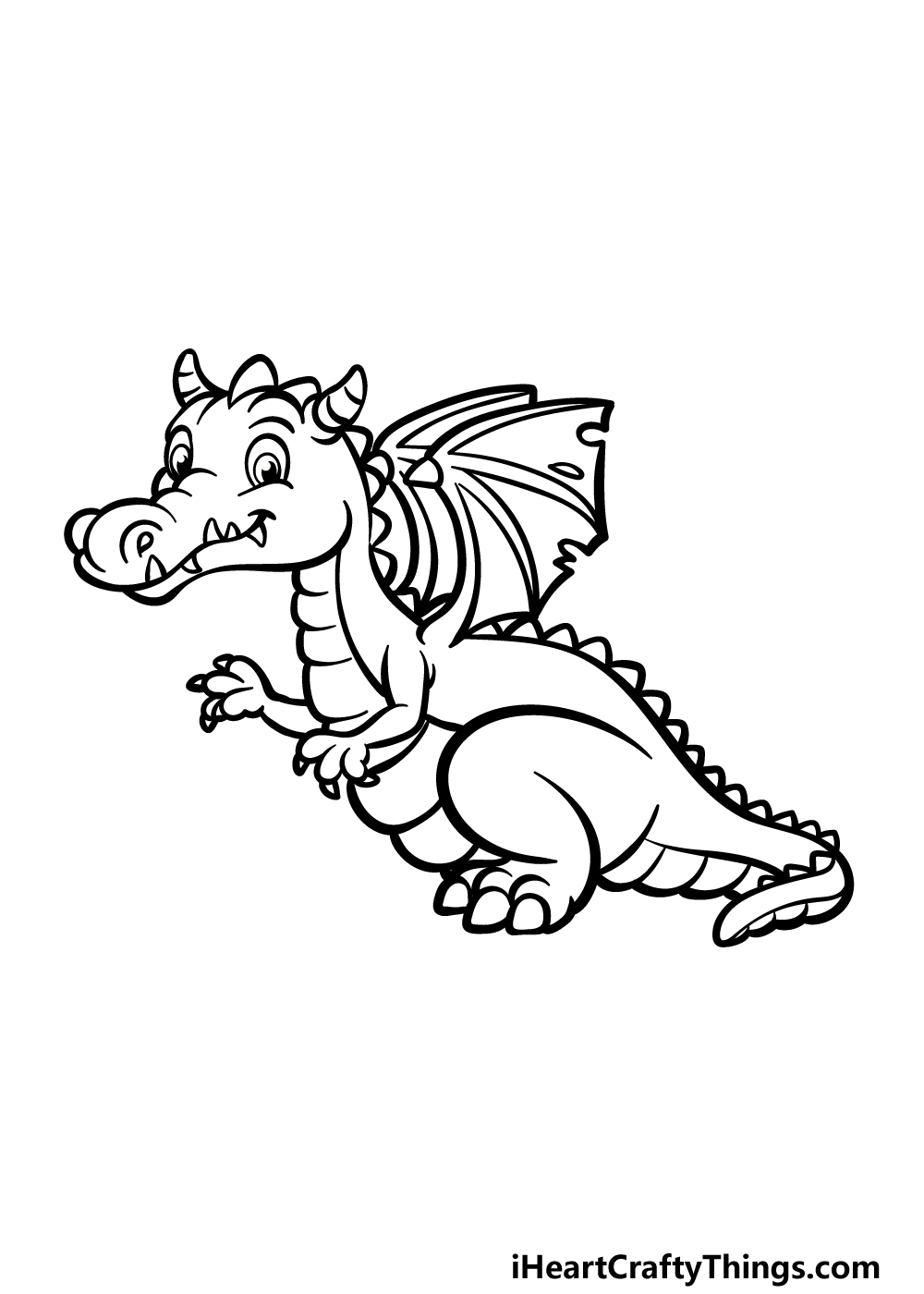 In this fourth step of our guide on how to draw a cartoon dragon, we will add the rest of the belly along with the first back leg.

The back leg is curled over and drawn with a rounded line. It also has large pointy nails at the ends of the toes, as shown in the reference image.

For the belly and the base of the tail, we will be drawing more of those curved individual sections that are coming down from the neck.

With these done, we will have just a few final details that we will be adding in the next step of the guide!

Step 5 – Add the final details to your cartoon dragon drawing 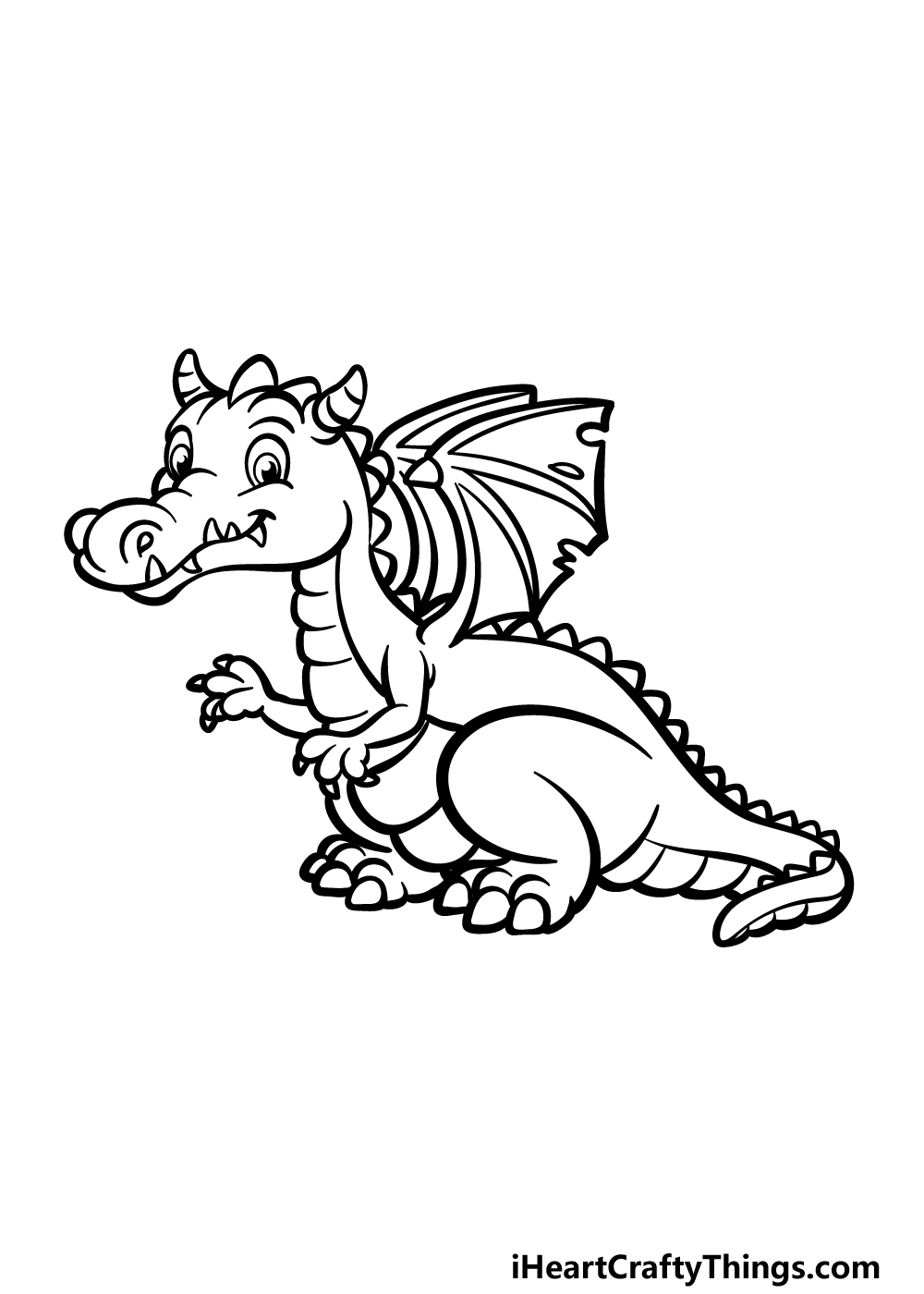 Now you‘re ready to finish off this dragon with some final details! As you can see in our reference image, the other foot is visible as well, and that is the final aspect we shall add.

This one will look very similar to the other one in that it will have small toes with large, pointy nails at the ends.

Once you have added this other foot, you will be ready for any additional details!

There are many ways that you could go about finishing off the image, and this could include drawing a background or some extra details.

There are many different fun fantasy backgrounds that you could go for, and you could really let your imagination run wild! What kinds of settings can you think of?

Step 6 – Finish off your cartoon dragon with color 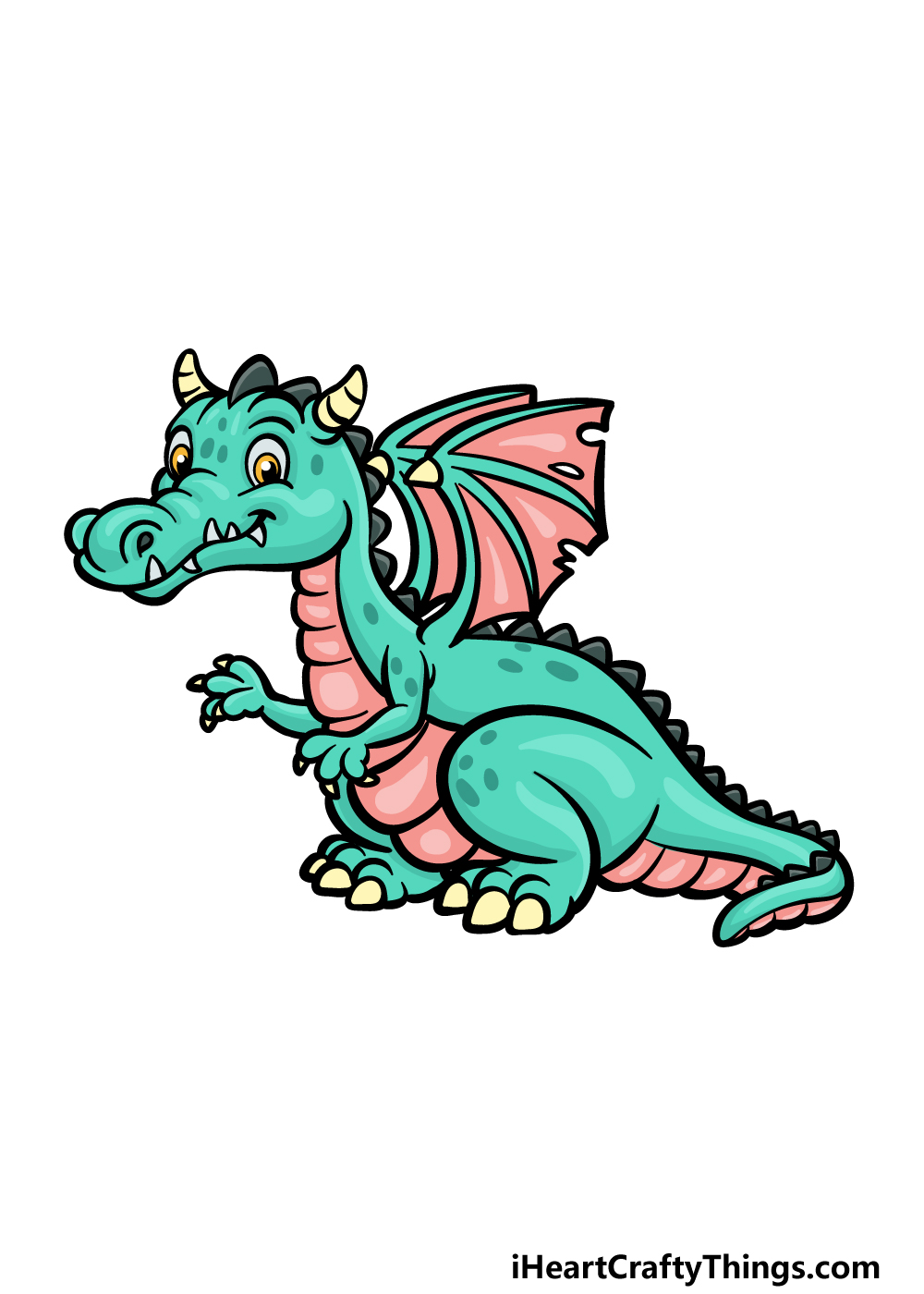 It’s time to finish off this cartoon dragon drawing with some colors! In our reference mage, we showed you just one of the ways that you could go about coloring this cute dragon.

We used some light turquoise blues for most of the body, and then we went with pinks for the underside and the leathery parts of the wings.

These are definitely colors you could go for, but you should also feel free to express your creativity in any way you wish!

There are so many great colors that you could go for when finishing off this image. Choosing the colors is just a part of the fun, however.

You can also change up the art tools and mediums that you use in order to get some unique color tones. What will you pick to finish off this dragon?

5 Tips To Make Your Cartoon Dragon Drawing Even Better!

Create a mythical monster with these tips for your cartoon dragon sketch!

This drawing of a cartoon dragon that we created in this guide is colored with a light blue. It’s a great color for this dragon, but you could also use any other colors you like!

For example, dragons are often depicted with darker reds, so you could use that kind of color palette for the cartoon dragon. What are some colors you would like to use?

Choosing your colors is just one way to make this cartoon dragon stand out. You could also use some cool art tools and mediums to make it look cool!

For example, you could use a light sprinkling of glitter to give this cartoon dragon a fancier look. Be sure to try out any of your favorite art tools, even if they seem a bit out there!

This cartoon dragon looks great on its own, but it could always use a second dragon to hang out with! Creating this second cartoon dragon would be as easy as following through the guide again.

Then, simply change a few details to make this second dragon look unique. You don’t need to stop at just one, as you could have a whole dragon party if you wanted to!

If you want to give this cartoon dragon drawing some company other than another dragon, you could add all manner of other characters.

There would be tons of different mythological creatures you could draw hanging out with it. Or, maybe you could have a knight encountering this friendly dragon.

Can you think of other creatures and characters?

Finally, this cartoon dragon sketch could use a lair to live in, and you could create one by adding a background for it.

This could be as simple as drawing the inside of a cave. Dragons are often said to hoard piles of gold, so that could be a fun detail to add as well.

This cartoon dragon could be just about anywhere, so maybe you can think of some other cool location!

Your Cartoon Dragon Drawing is Complete!

Hopefully you had a great time taking this colorful fantasy journey with us in this guide on how to draw a cartoon dragon!

We wanted to create an awesome design that would be fun to work on, but we also wanted to ensure that it would be easy for you to accomplish as well.

We’re sure you discovered that by following all the steps it can be made much easier than expected!

Don’t forget to visit our website for even more awesome drawing guides and other art activities to enjoy. We upload more to enjoy often, so remember to check in often to never miss out!

We would love to see how your cartoon dragon drawing turned out, so please share your finished image on our Facebook and Pinterest pages for us to admire and enjoy! 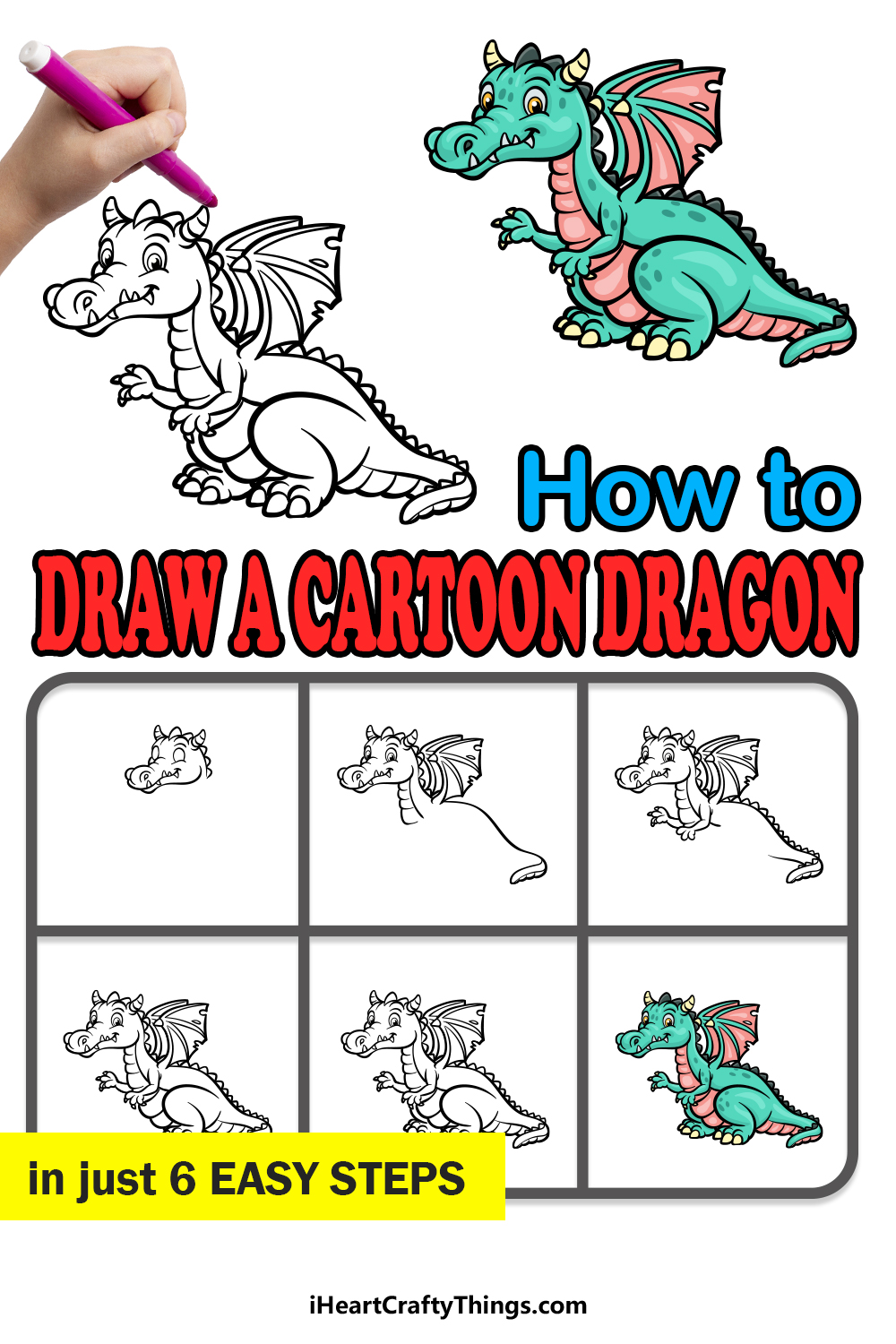 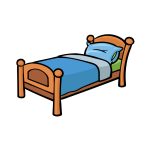 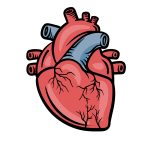