The vampire Count Dracula is one of the most famous fictional characters ever created.

First appearing in the book by Bram Stoker, this terrifying creation has gone on to star in many films, books, video games and more.

He has also been portrayed in many different ways, from scary and visceral to being portrayed in a more light-hearted, fun way.

This guide on how to draw a cartoon Dracula leans more into that second category, as it presents the Count in a more whimsical fashion!

By the end of this guide, you will see how fun and easy it can be to replicate this famous vampire!

So get ready to sink your teeth into this awesome step-by-step guide on how to draw a cartoon Dracula in just 9 easy steps! 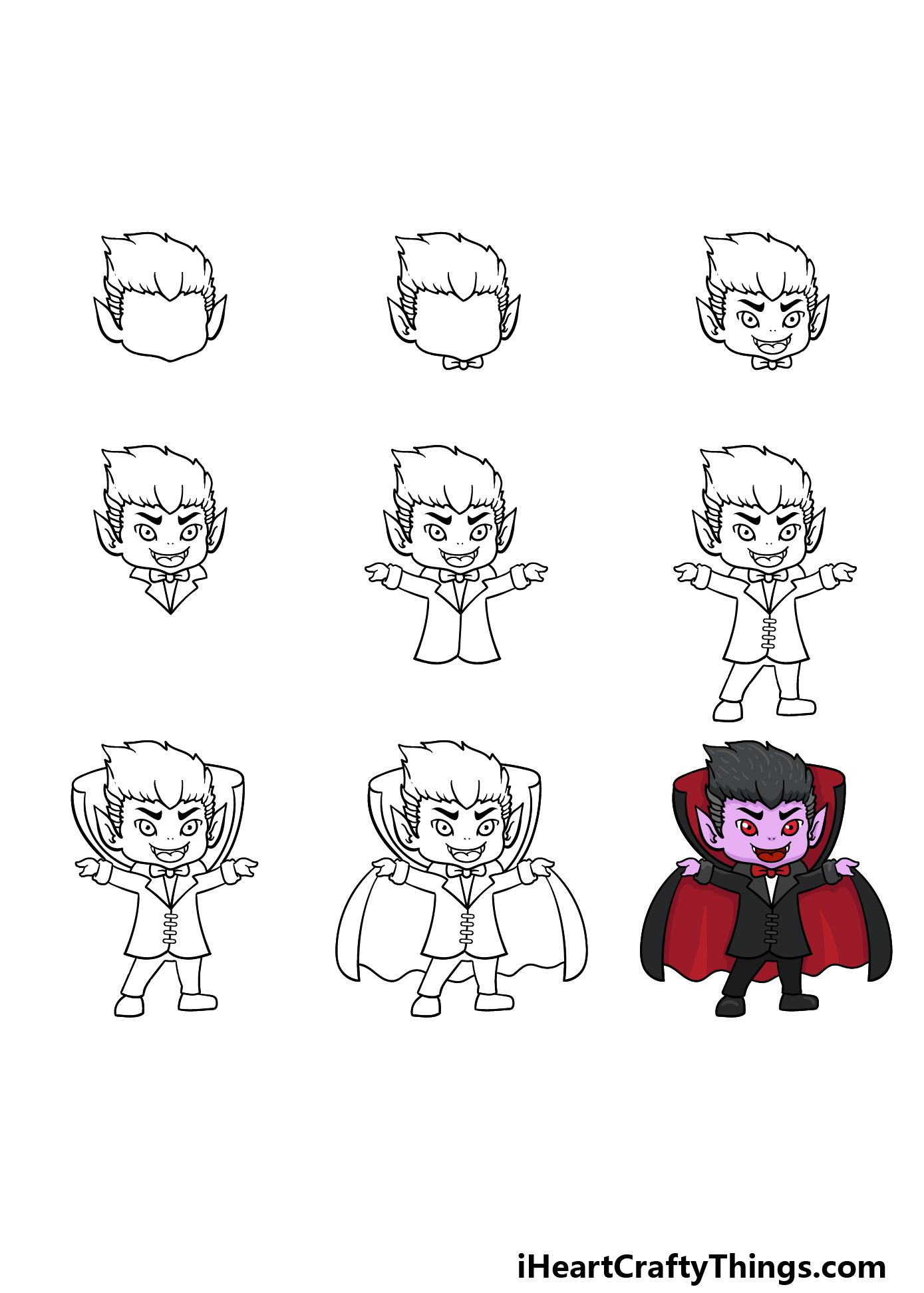 How to Draw A Cartoon Dracula – Let’s get Started! 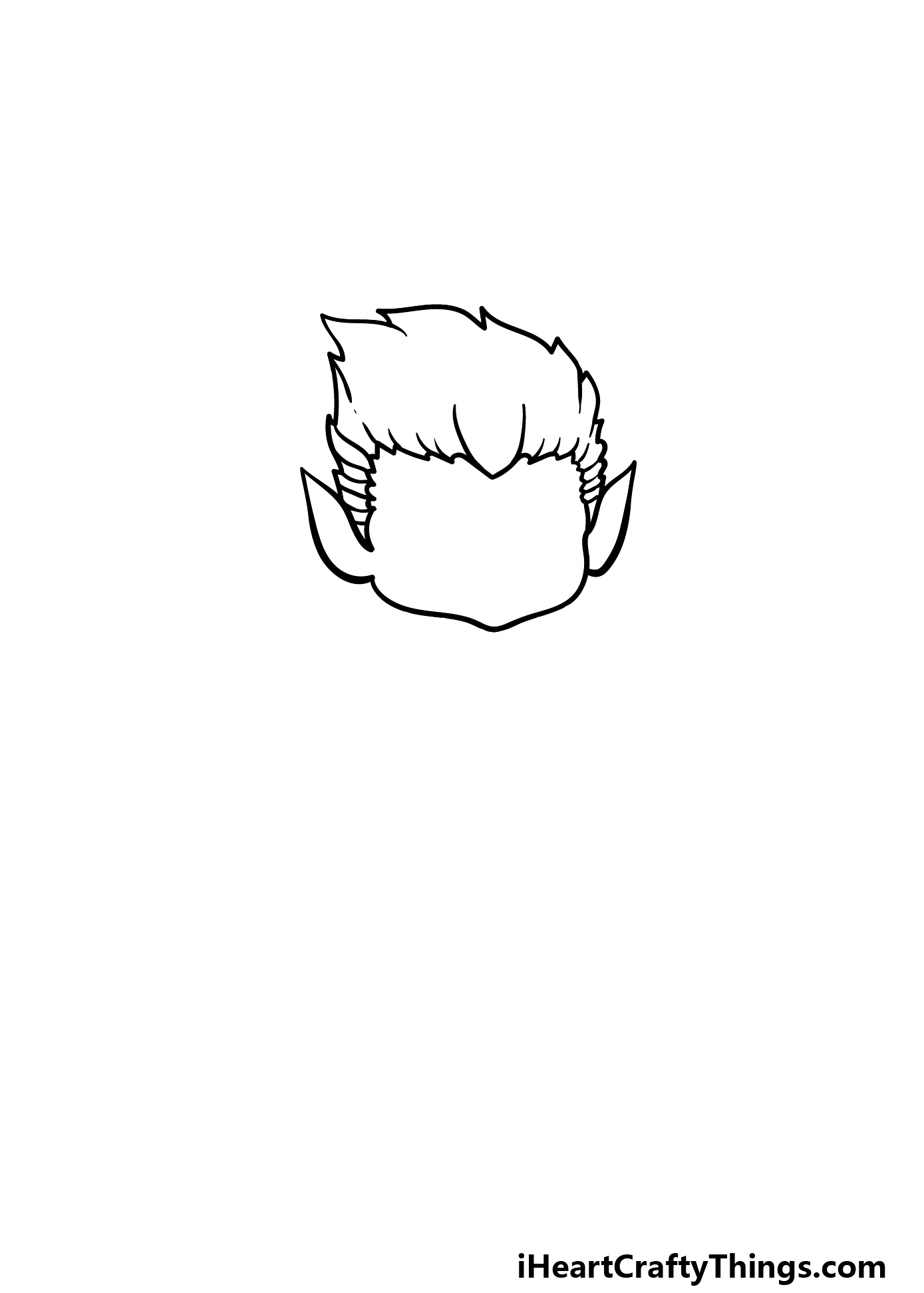 To start this guide on how to draw a cartoon Dracula, we will begin with the head and hair outlines. The face outline is drawn using some curved lines, and the same will apply to his ears.

The ears will go on the sides of his head, and they will have pointy tips at the ends.

His hair will have even more pointy tips worked into the outline, and these will help to give him a more modern look!

Step 2 – Next, draw some smaller details 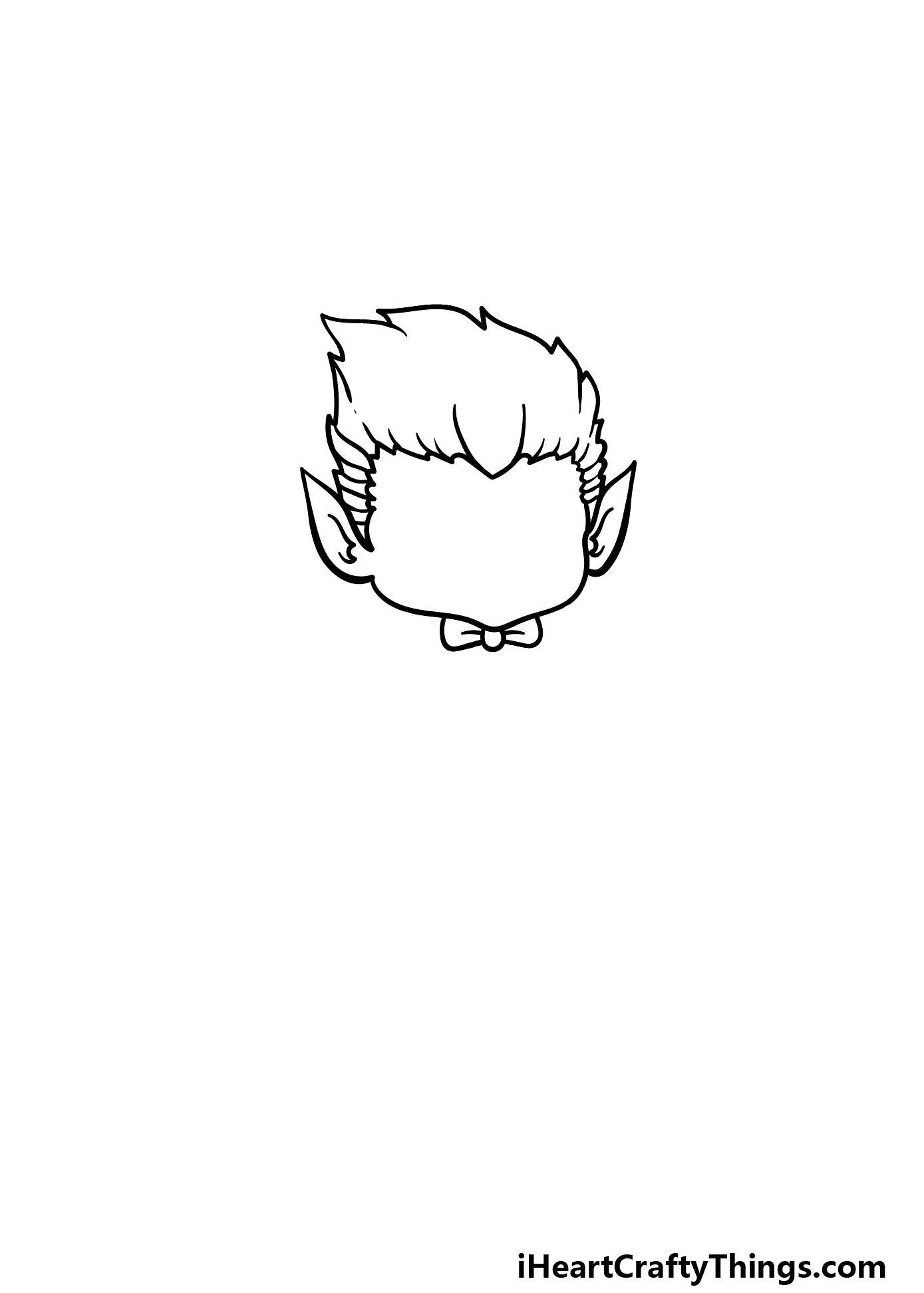 Before we start adding his facial details, we will add some smaller touches in this step of your cartoon Dracula drawing.

First, use some curved lines inside of his ear outlines for the inner ear portions.

Then, draw a small circle at the base of his face and then add some side portions for his bow tie. That’s all there is to it, so let’s move on! 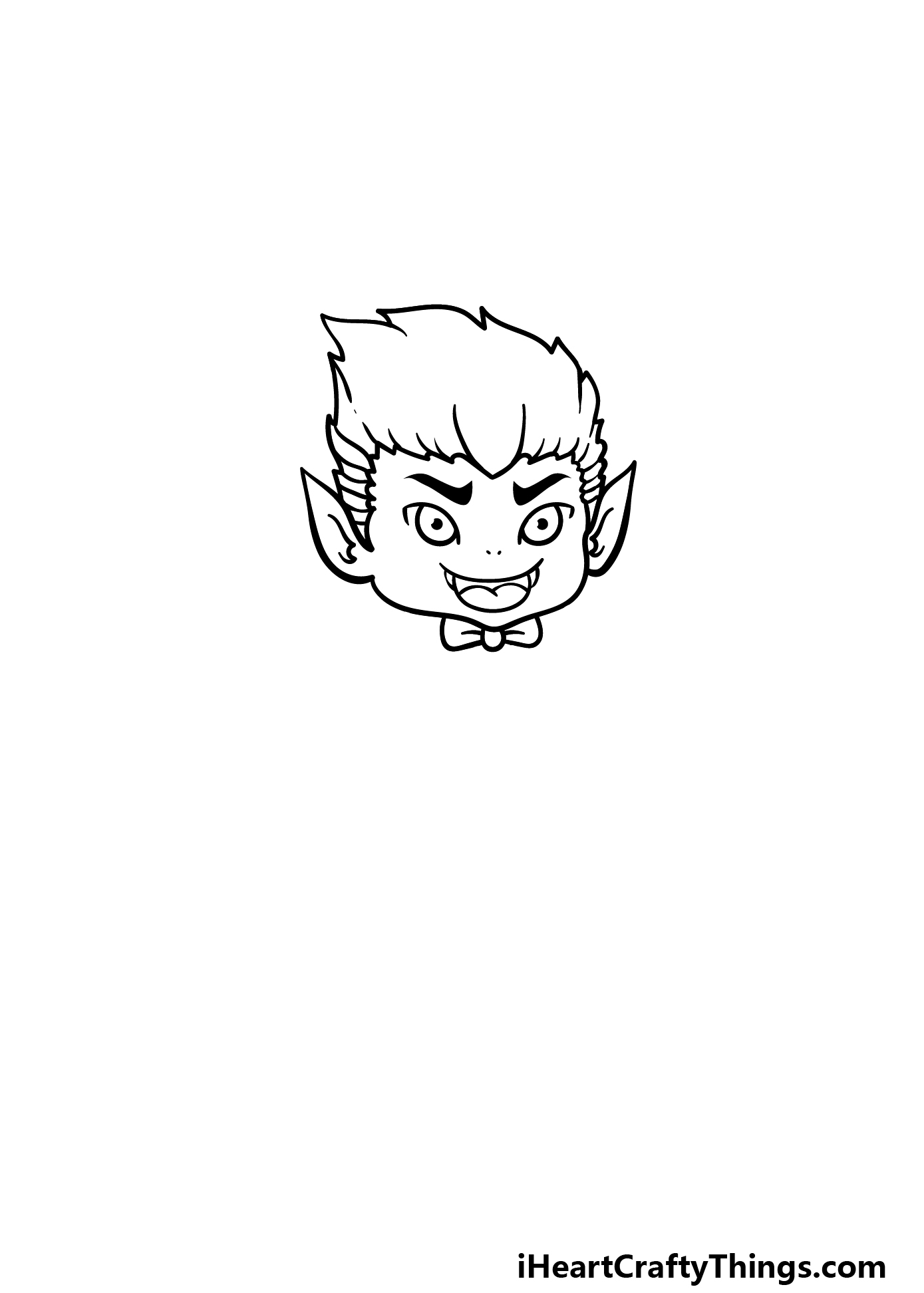 Now it’s time to start drawing those facial details that we mentioned earlier. First, draw some circles with dots in them for his eyes, and then add some curved lines above them.

He has two small dots for his nose, and then his open mouth is drawn with curved lines.

Finally, add some thick eyebrows over his eyes to finish off his expression! 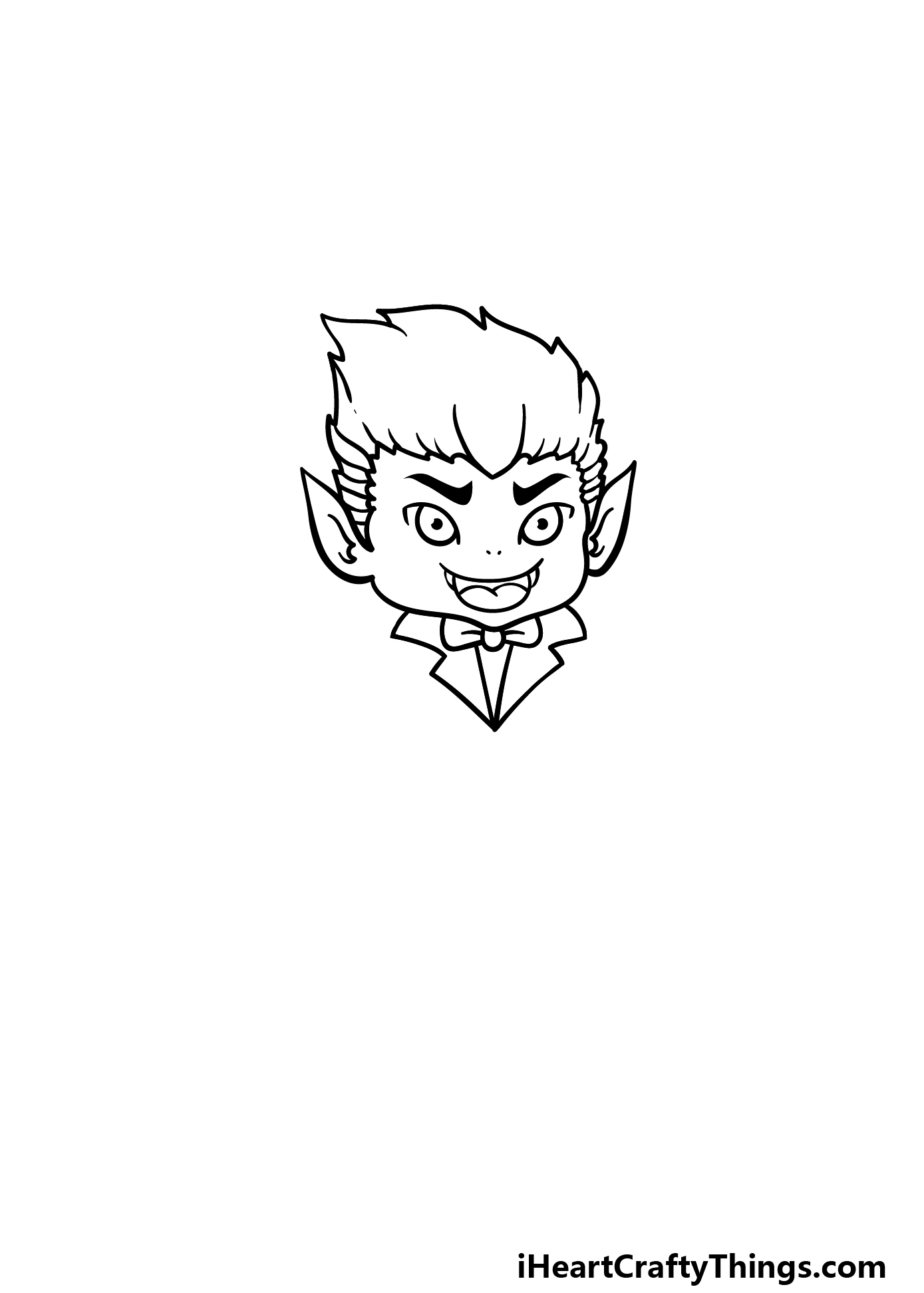 This fourth step will be quite a simple step, as we will focus on the lapel of his jacket.

These are drawn using a combination of curved, straight and pointy lines, and they angle down and inwards as shown in the reference image.

Once this lapel is drawn as it appears in our example, you can continue to the next part! 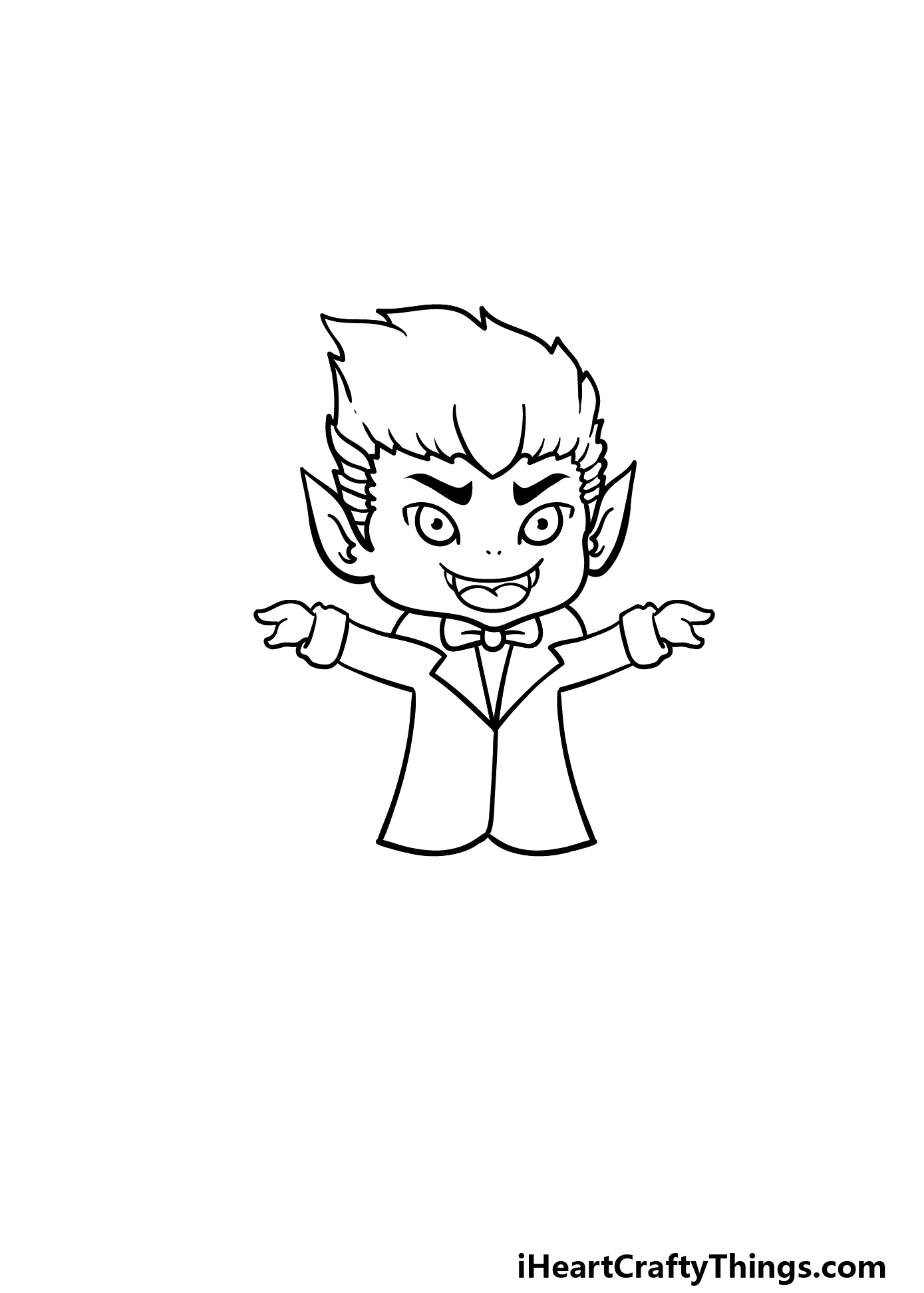 Step 5 of this guide on how to draw a cartoon Dracula is all about adding some arms and his chest!

First, we will draw his arms, and they will attach to the lapel of his jacket that you drew in the previous step.

His arms will be quite short, and they will have thick squared shapes at the ends. His hands are drawn extending outwards in a beckoning gesture.

Then, draw some curved lines for the two halves of the waist for his jacket, and then that’s it for now!

Step 6 – Next, draw details for his jacket and legs 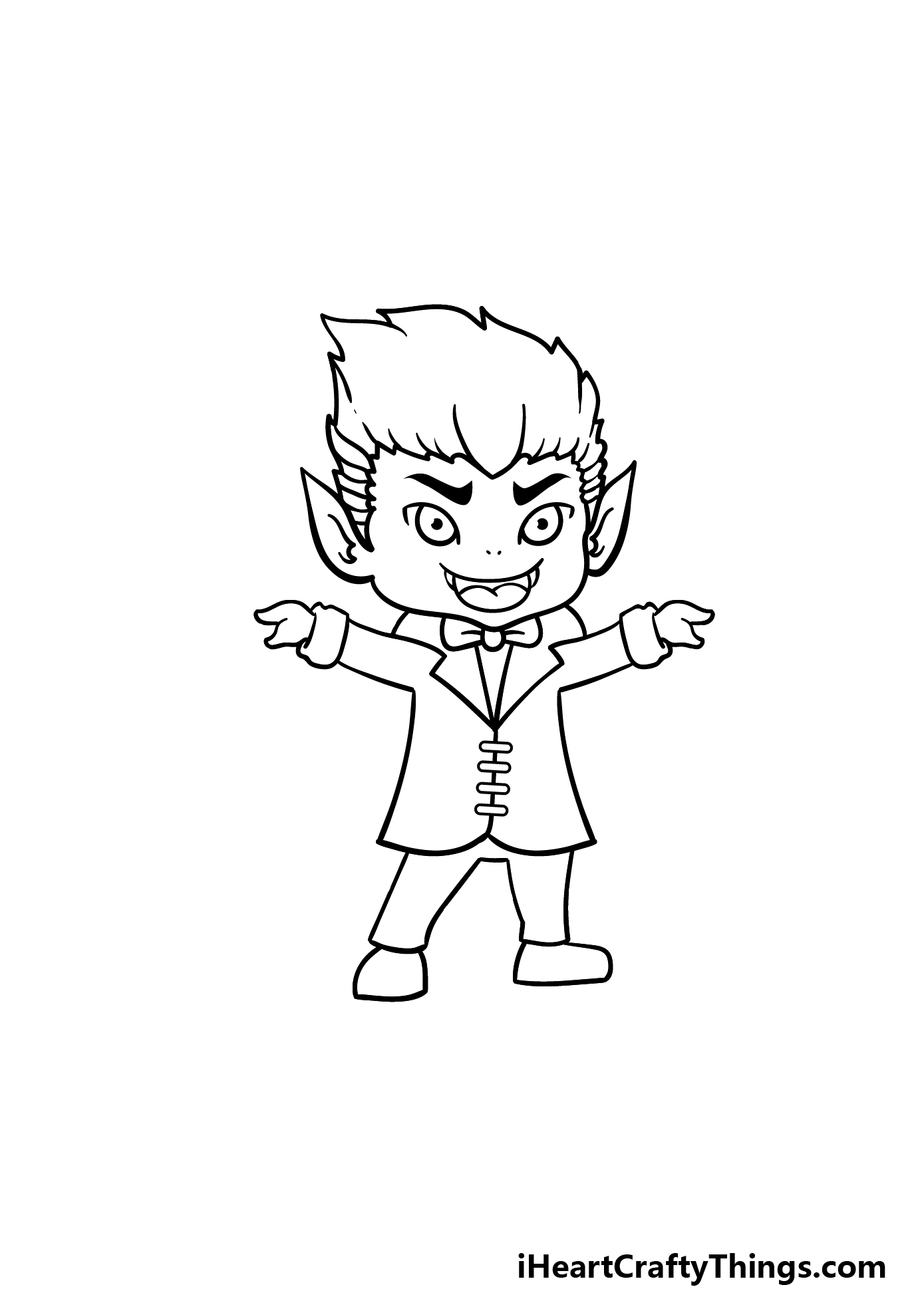 For this part of your cartoon Dracula drawing, we will be drawing some buttons onto his coat while also adding his legs.

For these buttons, draw a row of thin horizontal shapes going down the center of his coat. Then, draw some short legs under the coat, and then add his simple shoes at the ends. 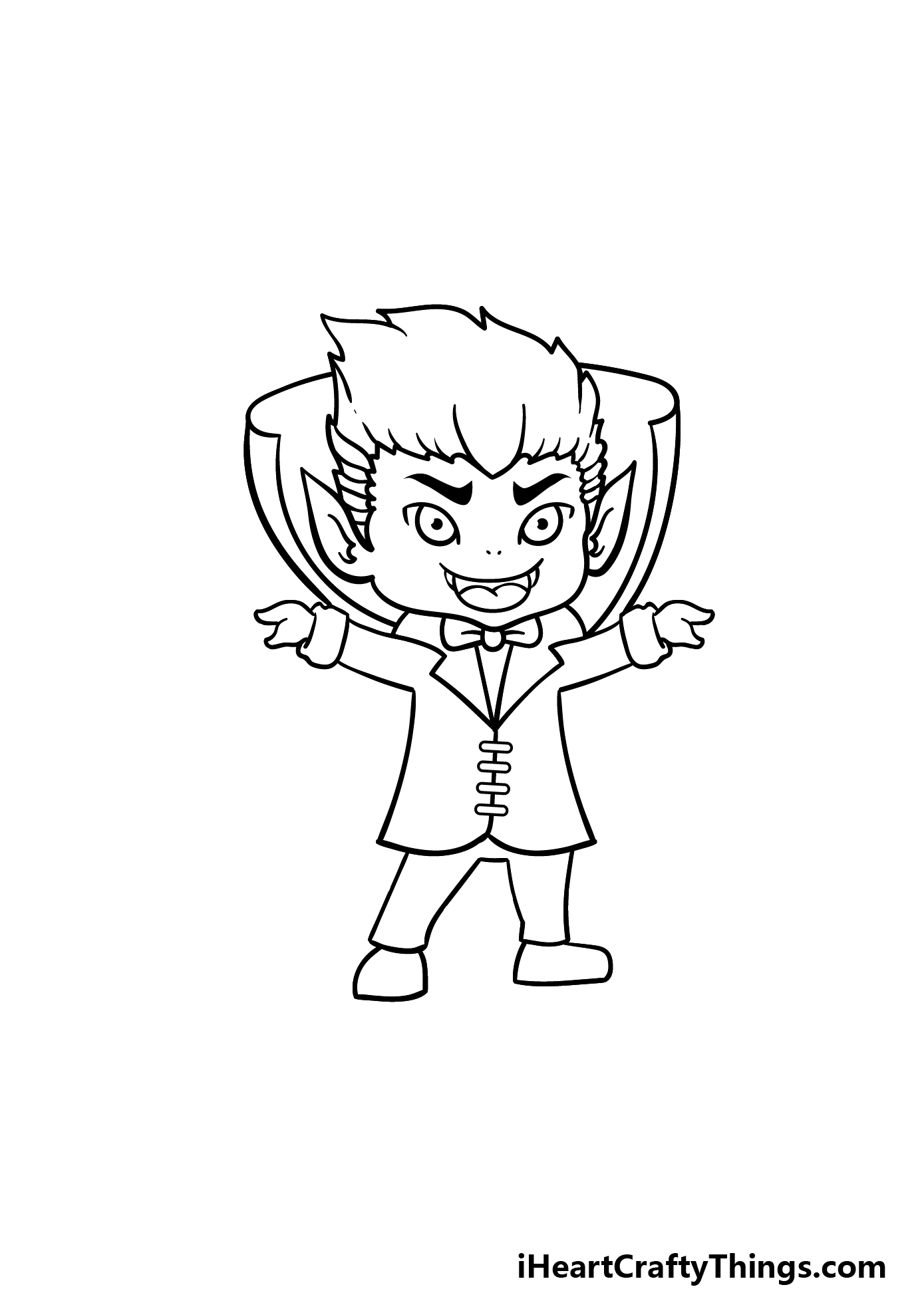 Dracula is often portrayed with a large, flamboyant collar, and we will draw this now! The collar is tall, and is almost as tall as the tip of his hair.

It is drawn using some more curved lines, and it will also curve inwards, as shown in our reference image. Once this is drawn, we just have a few final details to add in the next step! 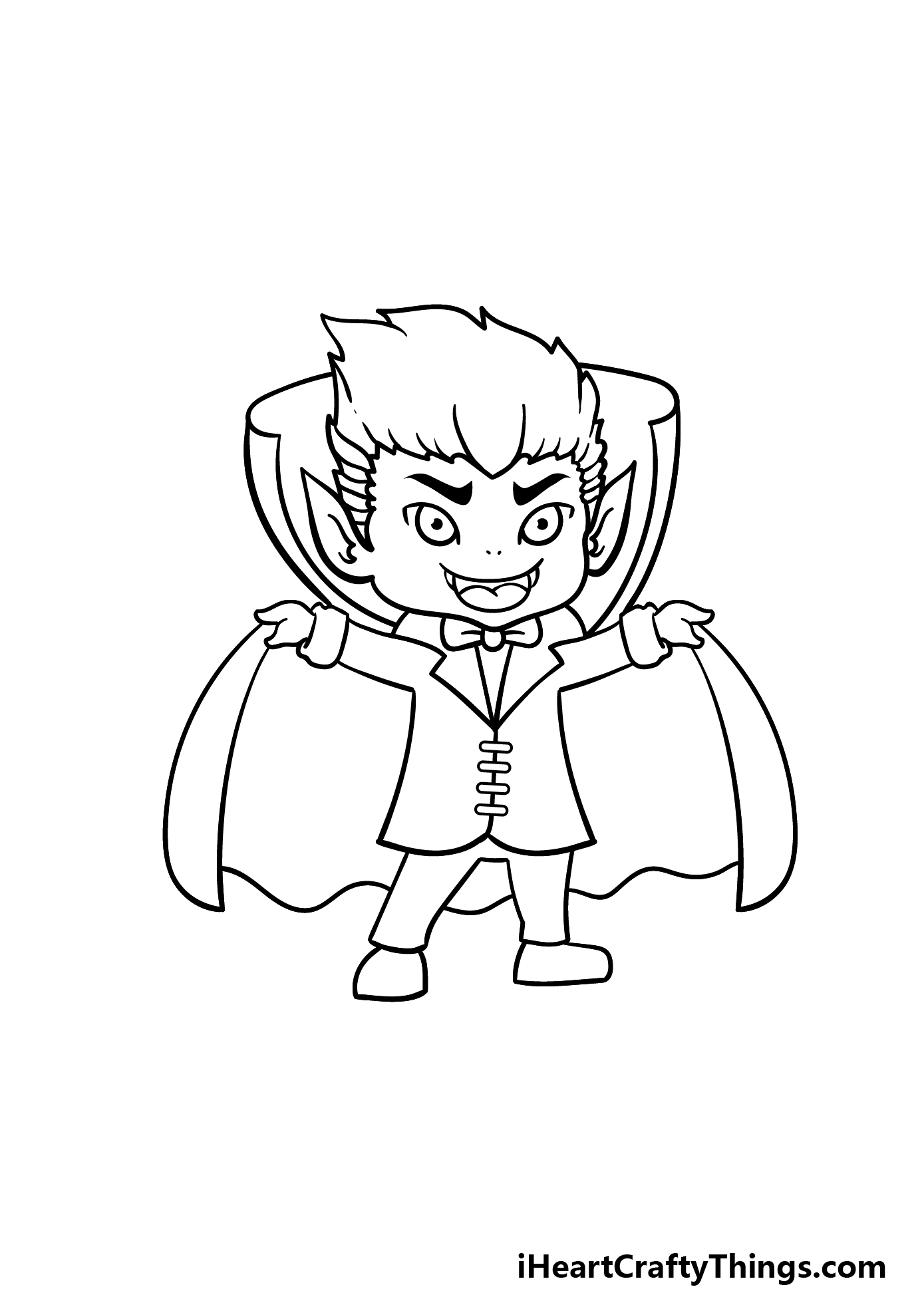 Another iconic aspect of Dracula is his cape, and that will be the final detail that we add in this step of our guide on how to draw a cartoon Dracula!

Once this cape is drawn, you could also add some details of your own.

Drawing a background featuring his famous castle would be really cool, but what other background settings can you think of? 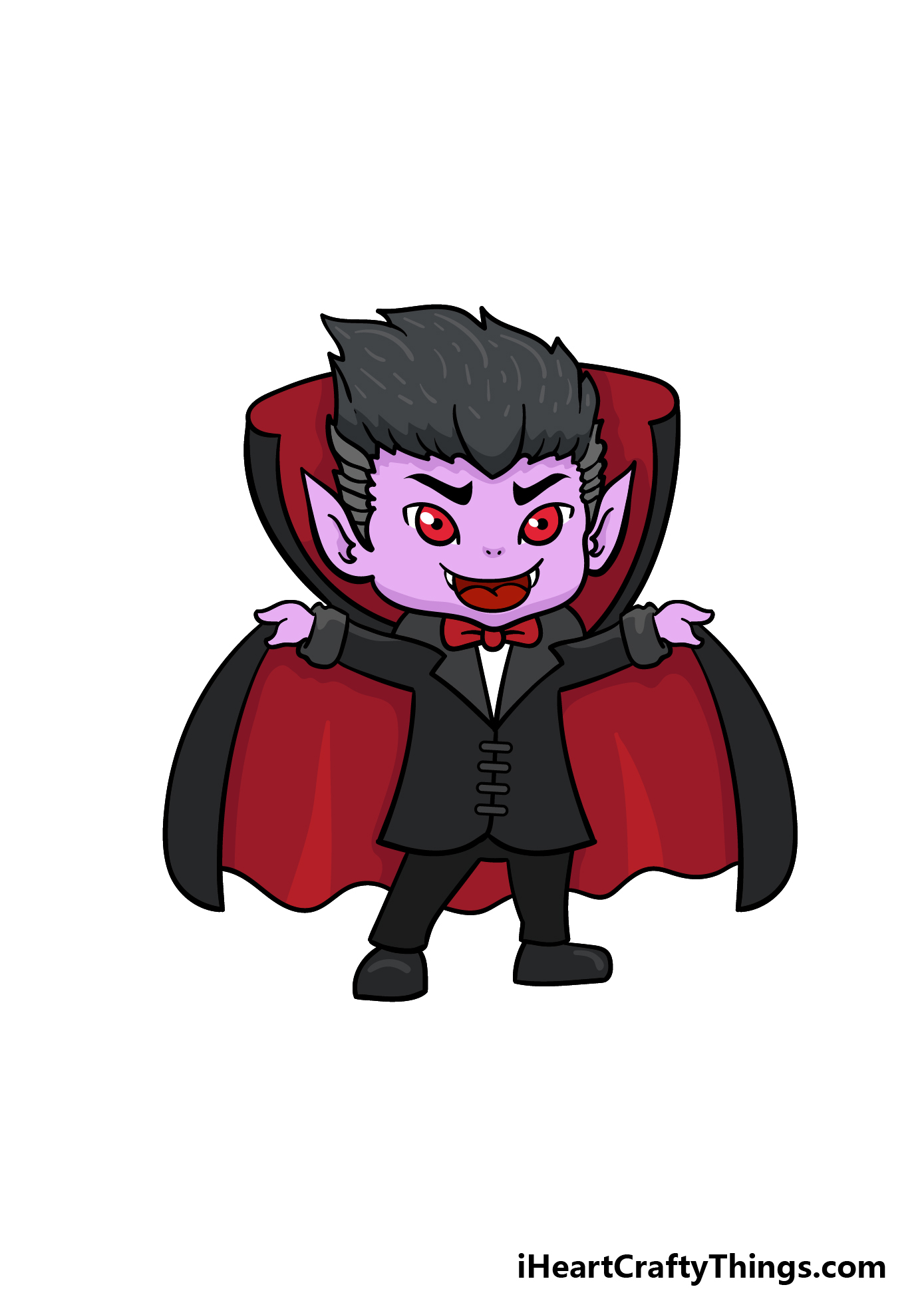 This is the final step, and now you can finish off the famous vampire with some color!

For our example image, we used purples for his skin, and then reds for his eyes and the inner portions of his clothing.

Then, we used blacks and greys for the outer aspects of his clothing. These are the colors we chose, but you could also go for some unique colors for your own one!

There are also loads of great art tools and mediums you could try out to make the colors look even better.

How will you choose to color this awesome picture?

5 Tips To Make Your Cartoon Dracula Drawing Even Better!

Create some spooky fun with these tips for your cartoon Dracula sketch!

This drawing of cartoon Dracula features a really cool take on this classic character. If you wanted to put your own spin on it, you could do so with just a few changes.

For example, you could change his hairstyle, facial expression or his clothing details. These would be simple ways you could keep the general design while making it more unique to you.

If you have too many ideas for ways that you could customize this character, you could use them for additional vampire characters!

This would be a great way to be creative and also add some pals for Dracula.

You could also really shake things up in ways such as having a female vampire character, for instance.

When it comes to adding more characters to this cartoon Dracula drawing, you don’t need to stick to just additional vampires. You could add some other classic scary creatures and characters as well!

There are classics like Frankenstein’s monster, mummies and zombies that could be prowling the night with Dracula.

What are some other classic monsters and characters that you could add to this picture?

Vampires are often associated with different animals and objects, and these could be added to the picture as well. For instance, vampires are said to be able to transform into bats.

These would be great to have fluttering around cartoon Dracula! Or, you could draw a coffin in the background that he could have just risen from.

Those are just two ideas, but you should add any other creepy elements that make you think of vampires!

Finally, you could show where this cartoon Dracula sketch is hanging out by adding a background. There are so many scary locales that you could use for this purpose.

A great one would be to have Transylvania Castle looming behind him. You could also go for a haunted house or maybe even a graveyard for optimal spookiness!

Where else could Dracula be stalking the night?

Your Cartoon Dracula Drawing is Complete!

You’re reading this, which means you have made it to the end of this guide on how to draw a cartoon Dracula!

We hope that the 9 steps in this guide showed you just how fun and easy drawing this cool portrayal of Dracula can be.

Also, we hope that you will try out adding some details and color choices of your own, as this can make it even more fun!

Speaking of keeping the fun going, you can also check out more of our drawing guides on our website.

There are tons there already with more on the way, so the fun times won’t end any time soon!

It’s always great to see how well your drawings turn out, and we can’t wait to see this one! 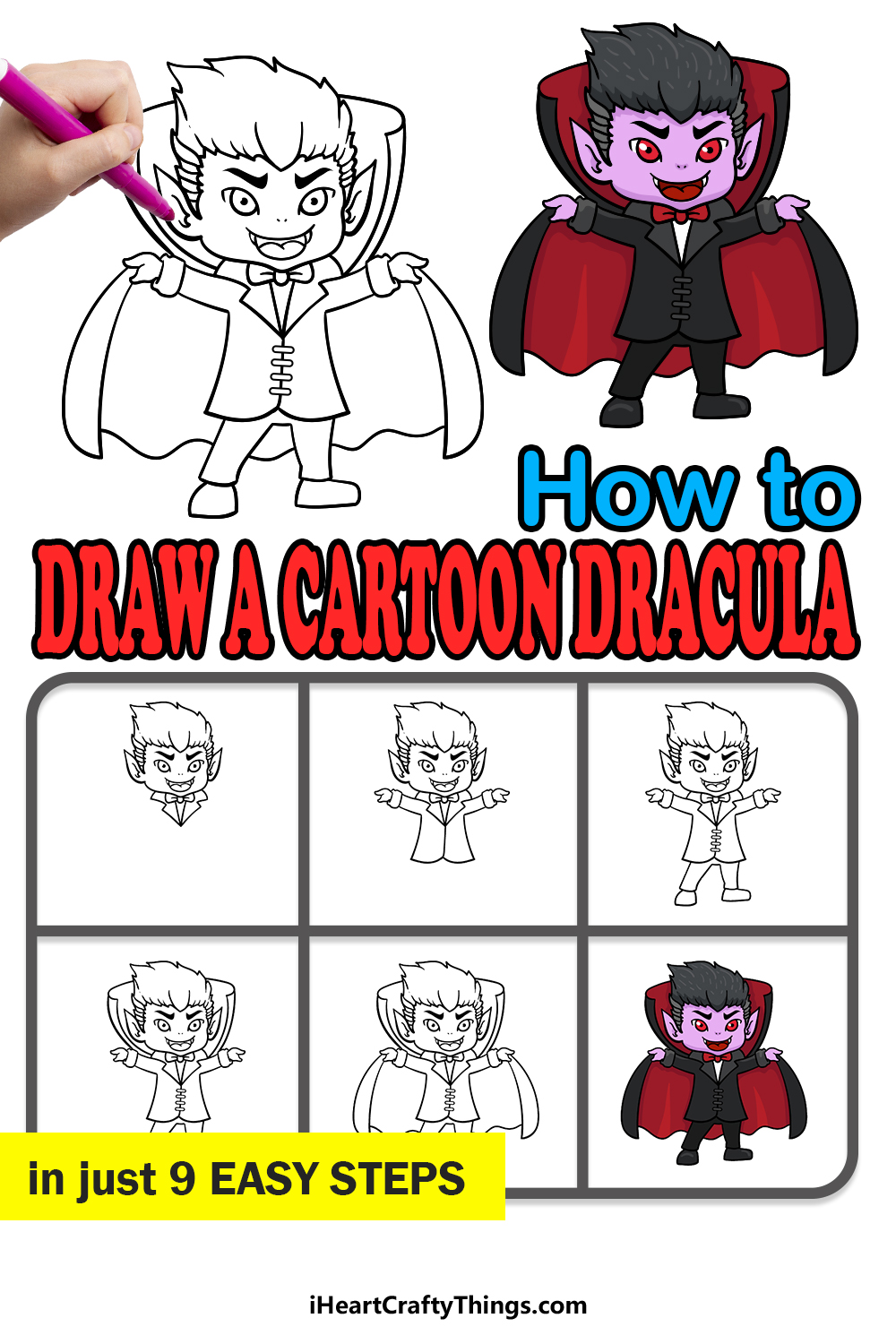 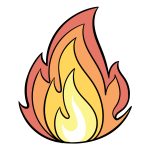 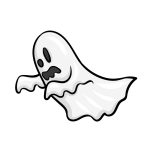