Death is a part of everybody’s life whether we like it or not!

It’s something that everyone has to come to grips with at one point or another, and many cultures have created myths and legends surrounding this tricky subject.

Death is often symbolized by the Grim Reaper; a hooded skeleton that carries around his signature scythe.

This guide on how to draw a cartoon death will help you represent a more lighthearted take on this legend!

This guide will show off the closest thing to a cute version of death that you can get!

So get ready to begin this step-by-step guide on how to draw a cartoon death in just 8 easy and fun steps! 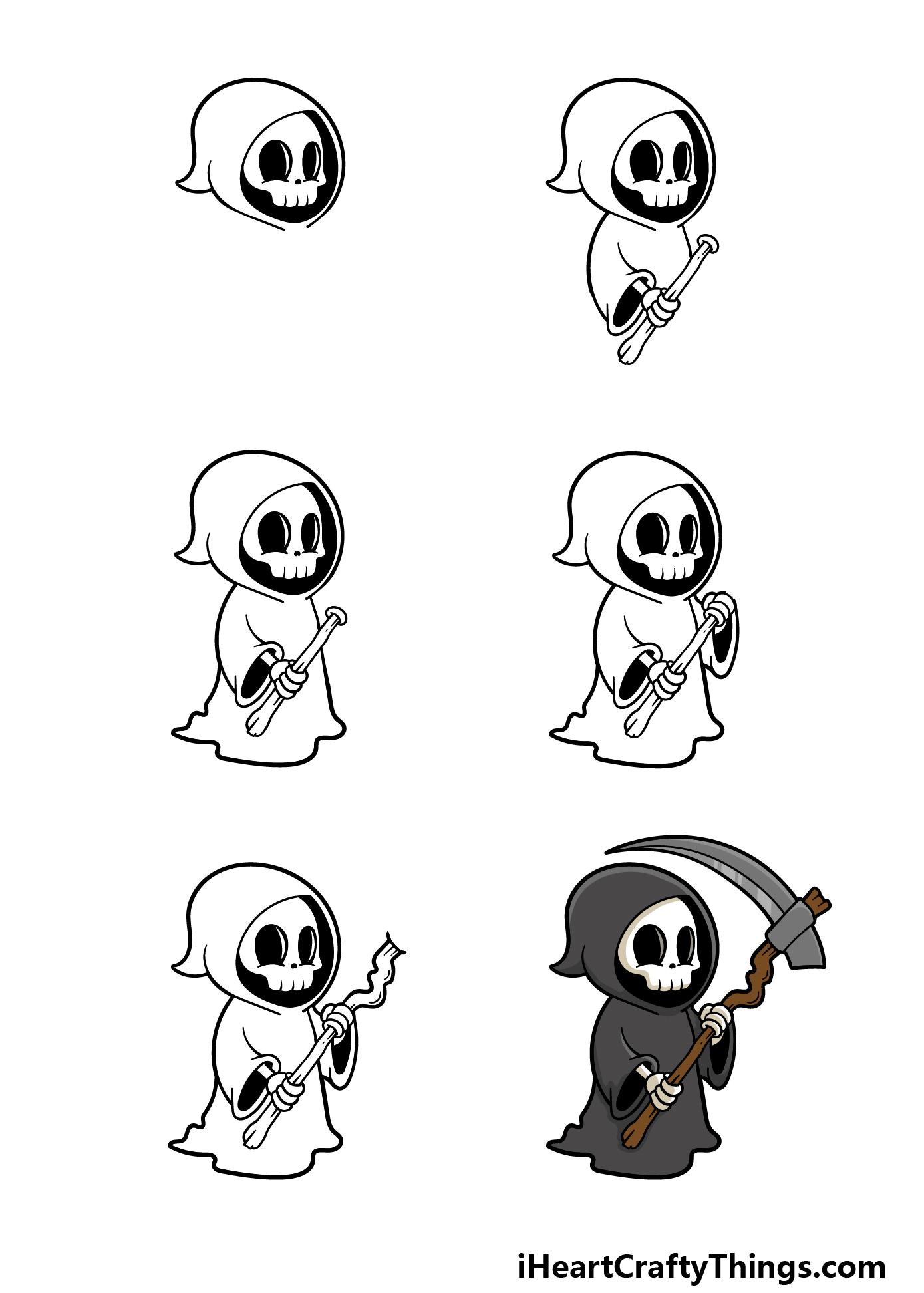 How to Draw A Cartoon Death – Let’s get Started! 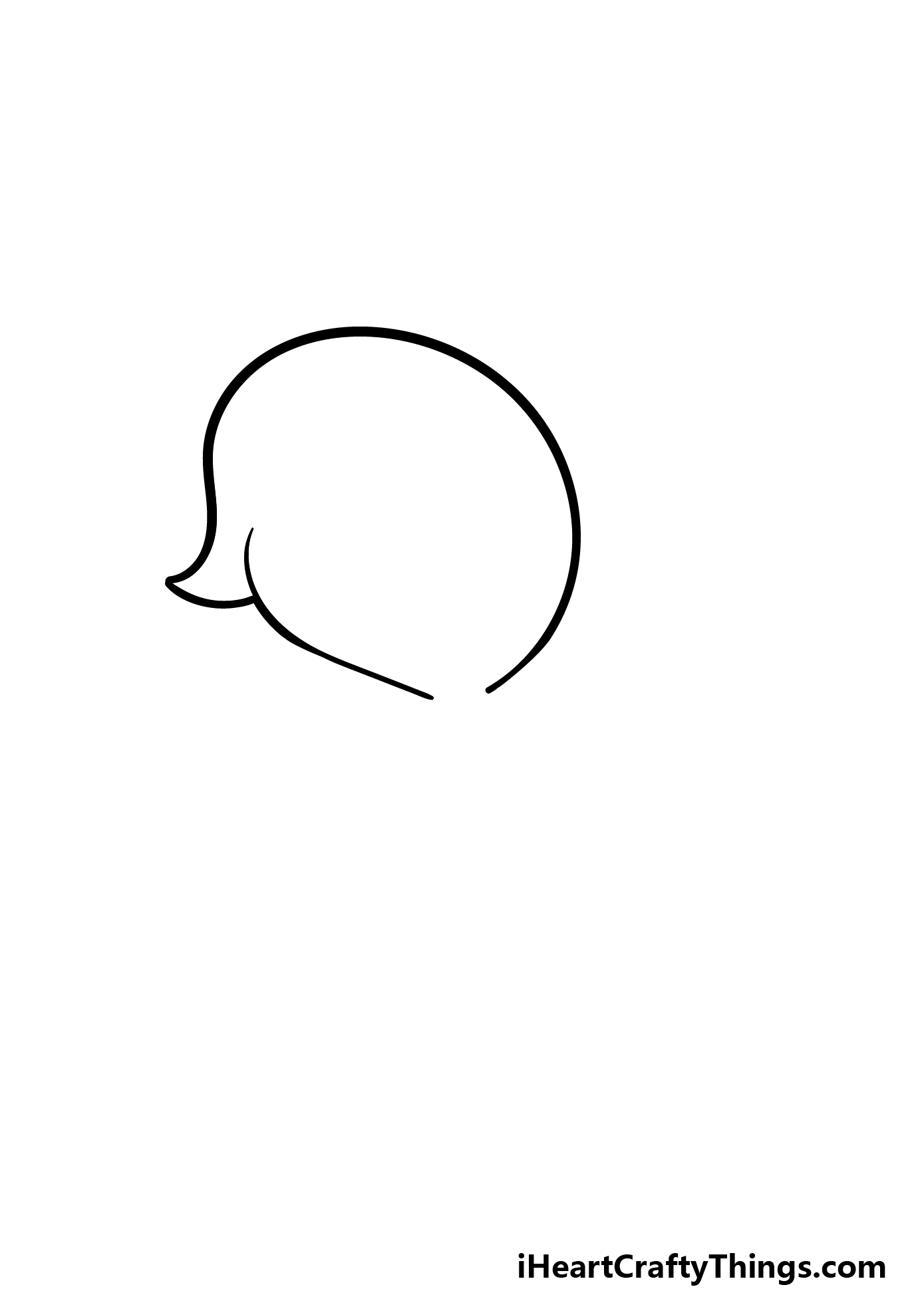 As we mentioned in the intro to this guide on how to draw a cartoon death, death is often represented as a skeleton in a black cloak and hood.

We will begin the guide by drawing the hood, and it should be a fairly simple step to do!

The hood is large and rounded, and there is a pointy portion folded over and pointing backwards.

You will also notice in our reference image that there will be a small gap at the base, but the reasons for this will become clear very soon!

Once you have drawn this hood as it appears in our example, we can move on.

Step 2 – Next, draw the skull inside of the hood 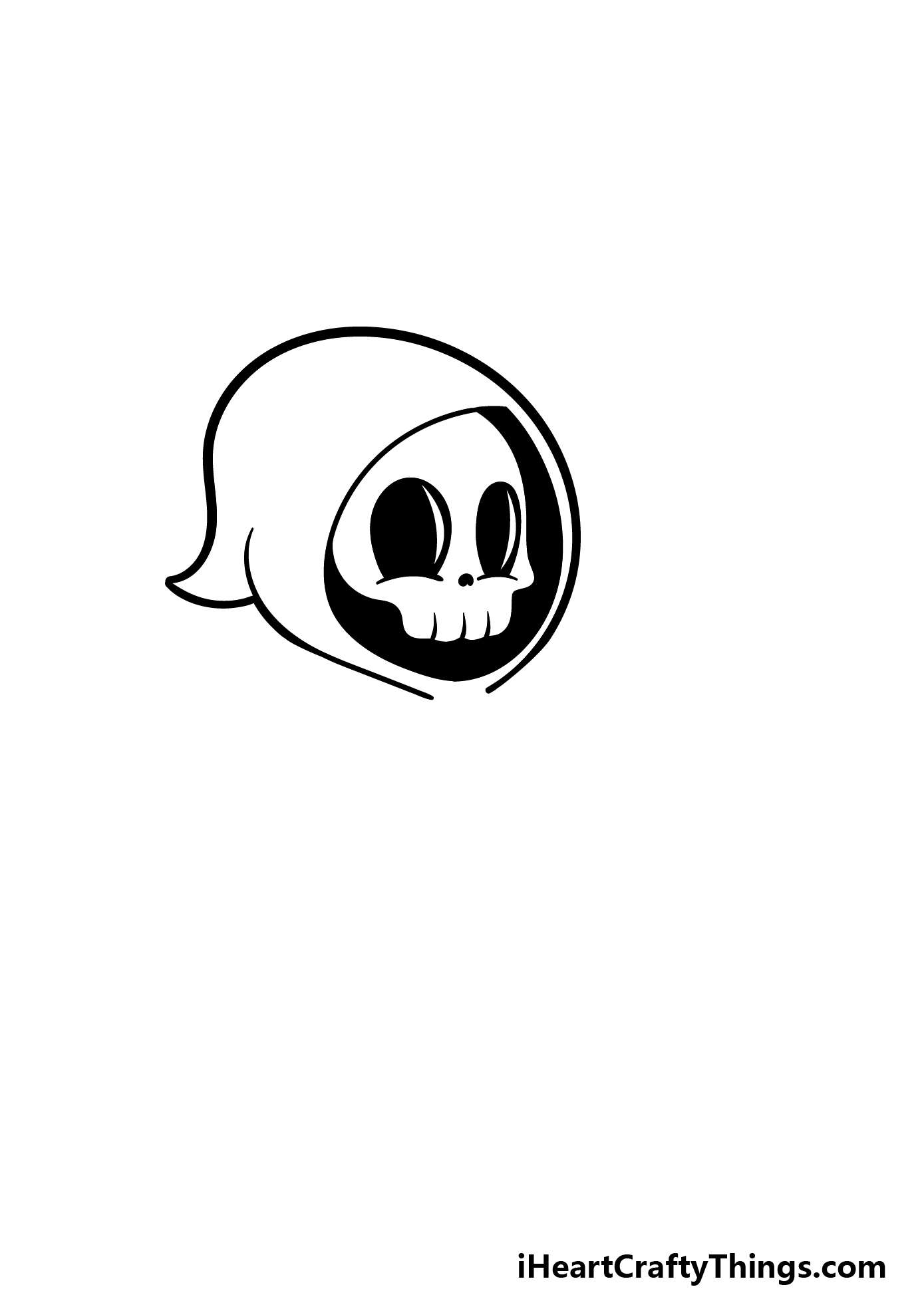 We will be drawing a rather cute skull for your cartoon death drawing in this second step! It will go inside the opening of the hood, so begin by drawing an outline for the opening.

Then, draw two large black ovals for the eyes and then add some curved lines beneath them.

There will also be a small black dot between the eyes for the nose. Then you can draw the outline of the skull itself. This will be rounded on top with some squared teeth at the base of it.

Finish off this step by filling the area around the skull with solid black, and then we can continue.

Step 3 – Now, draw an arm and start the body 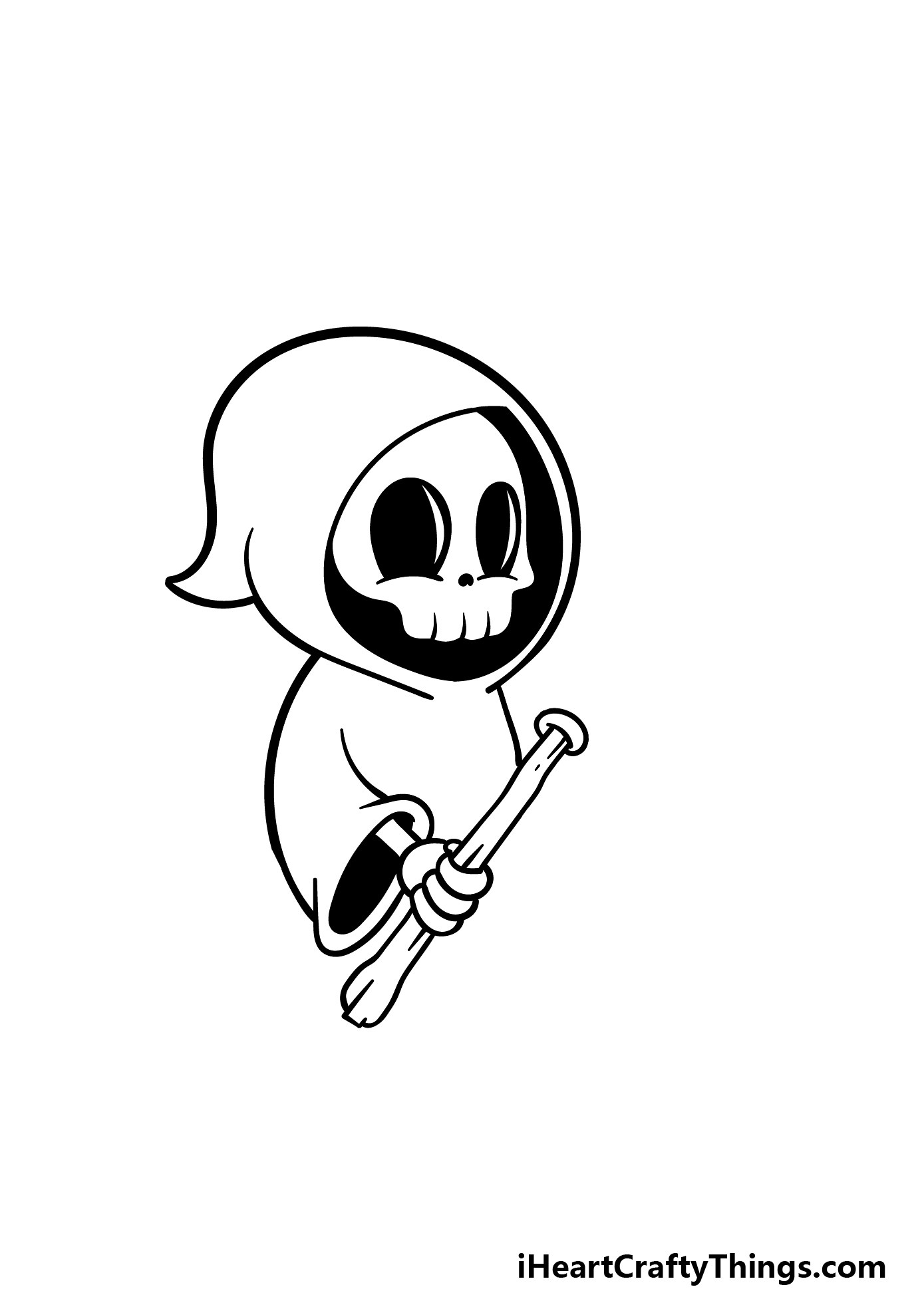 Next, we will start moving down on this drawing as we add the arm and start of the body.

The sleeve for the arm on the left will be drawn using some curved lines that end in a large rounded black oval shape for the opening of the sleeve.

This will be where his thin arm will poke out of, and there will be some rounded fingers at the end of this.

In this step, we will also start drawing his famous scythe, and this will have a slightly wavy handle with some wooden texture lines.

Step 4 – Next, draw the rest of his cloak 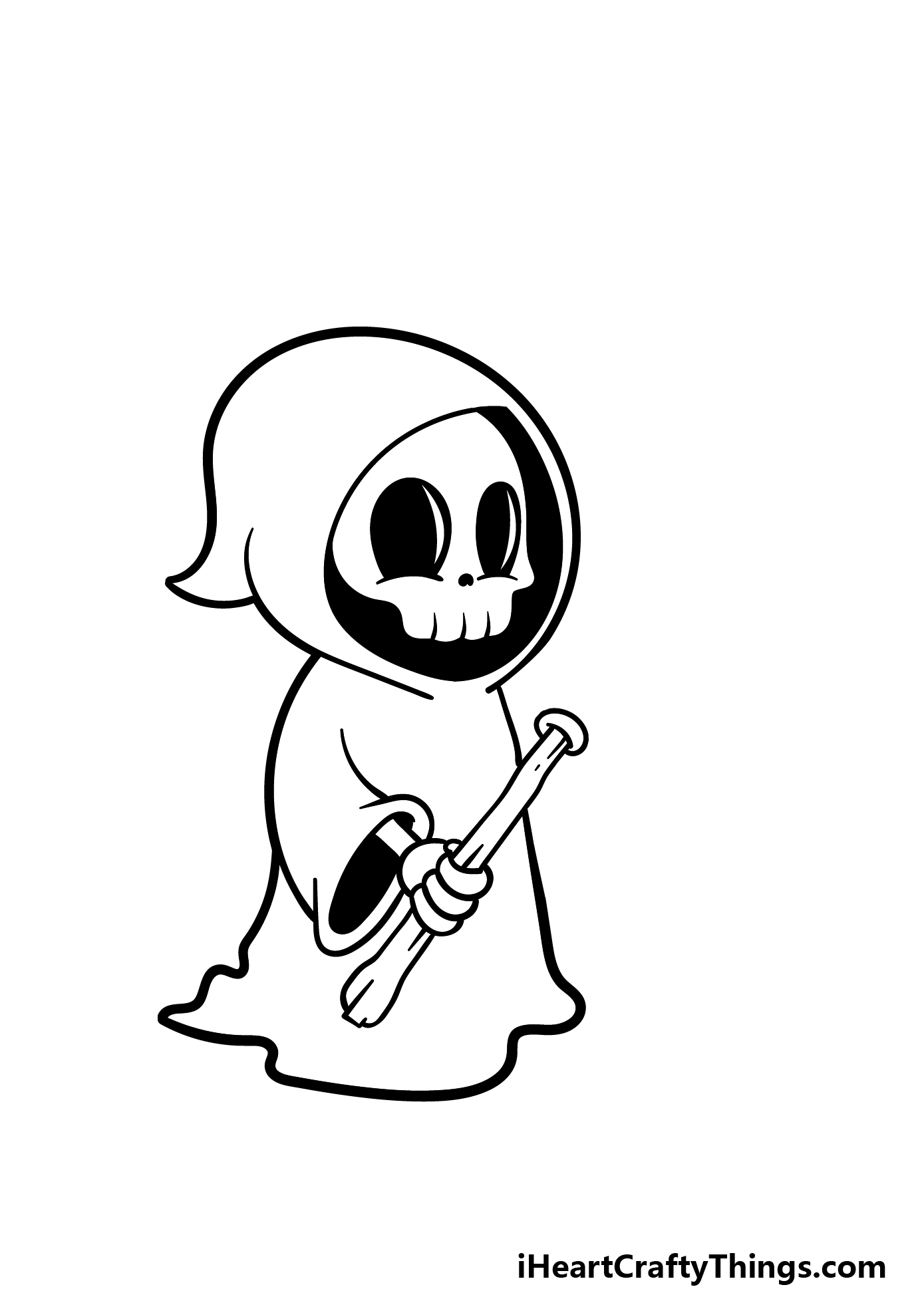 Now we can finish off the cloak in this step of our guide on how to draw a cartoon death.

We will be aiming to make this cloak look like it is made of fabric trailing on the ground, and this can be done using some curvy and wavy lines.

When you have drawn the cloak, we can then move on to step 5! 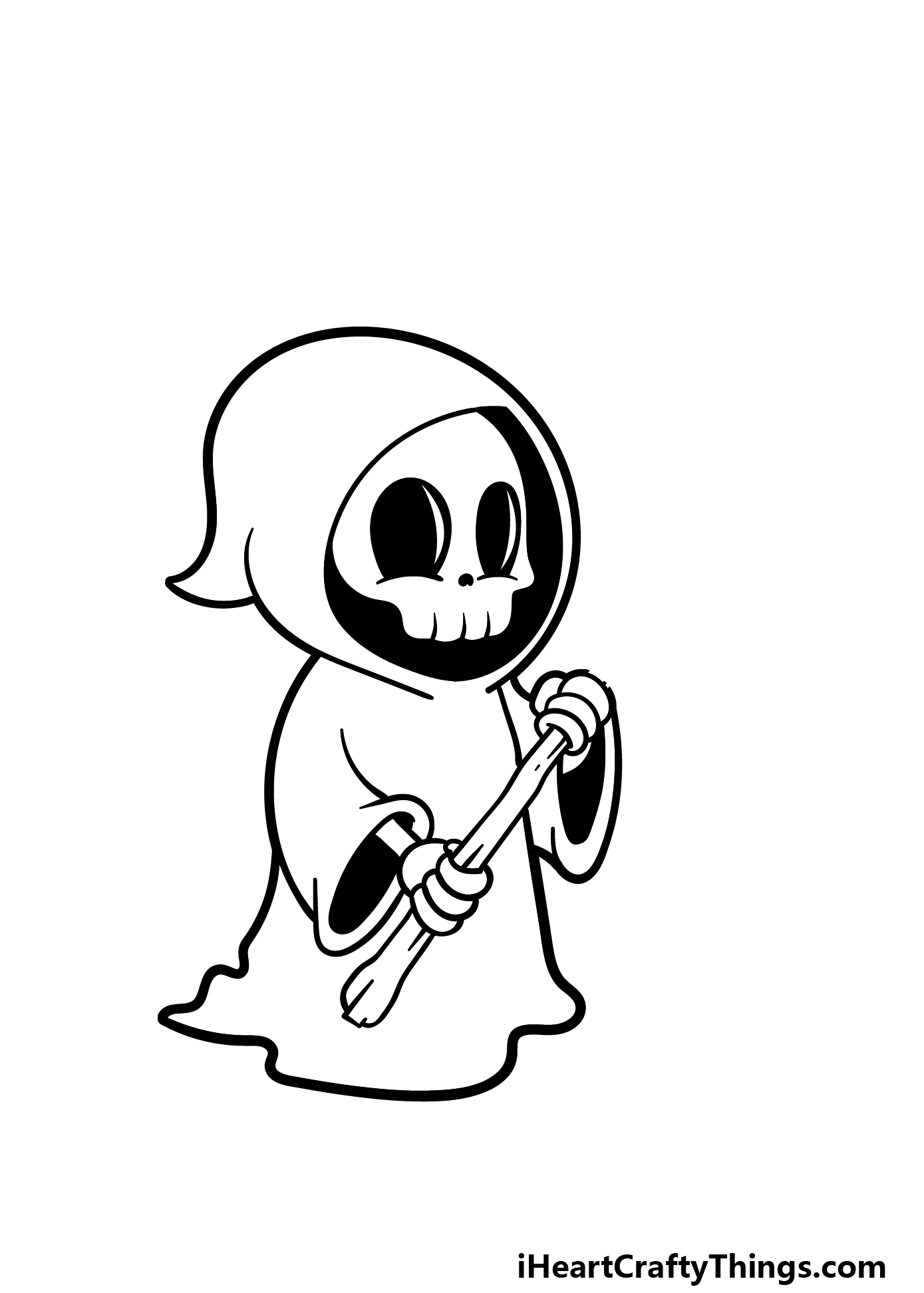 You will be adding the other arm to your cartoon death drawing in this step. As you can see in our example, this hand will be clasping the handle of his scythe.

The sleeve will look very similar to the previous one, and it will have a similar black oval opening at the end.  The fingers will be similarly curved to show them holding onto the handle.

That’s all for this step, so let’s move on to the next one.

Step 6 – Next, draw some more of the handle 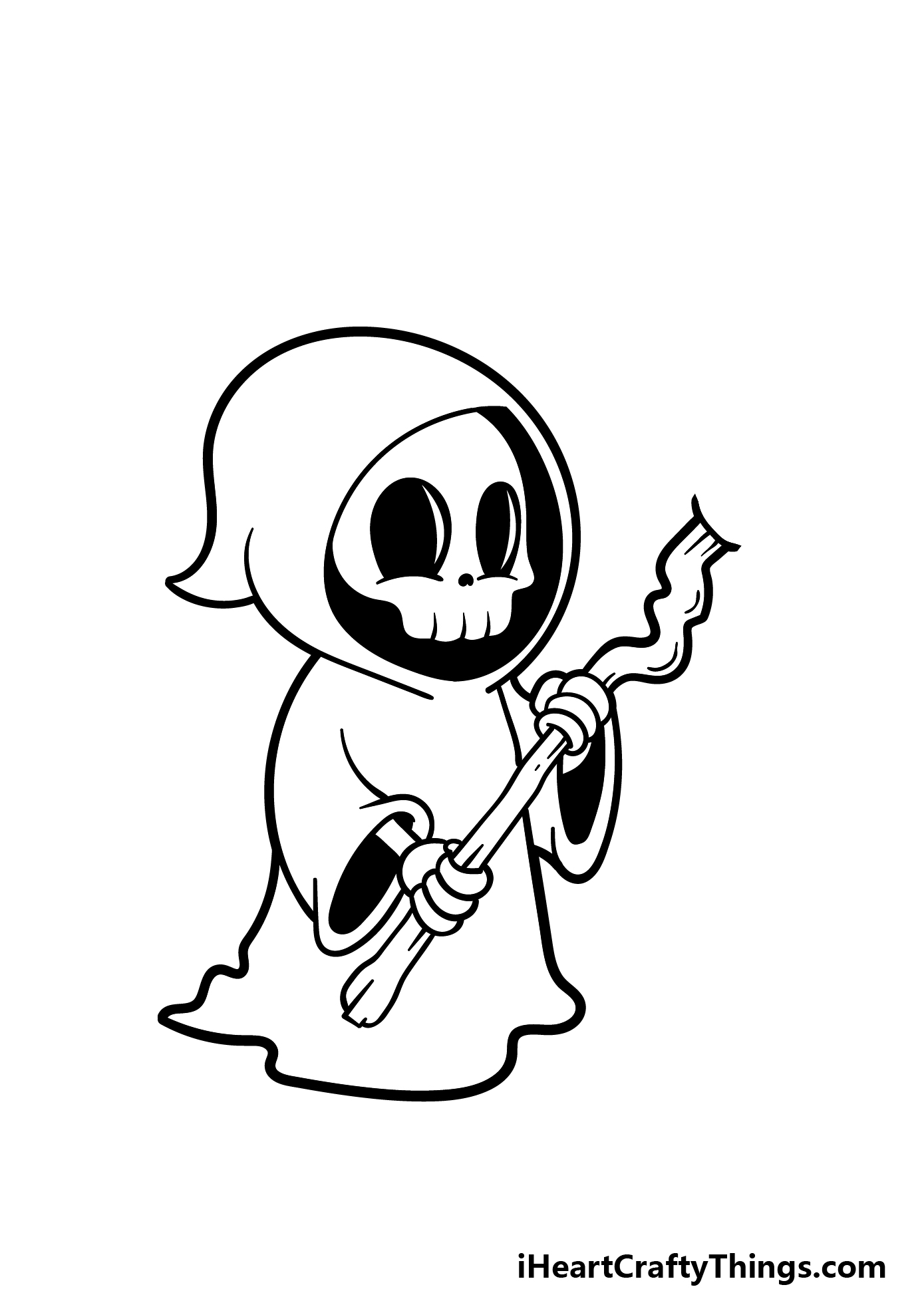 Before we add some final touches in the next step, we will add some more to the scythe he is holding.

This portion of the handle has a rather interesting design to it, as it is rather bent and twisty. You could also change up the design of the handle a little if you want a different look for it!

Once this portion of the scythe is drawn, we will finish it off in the next step.

Step 7 – Next, draw some final details 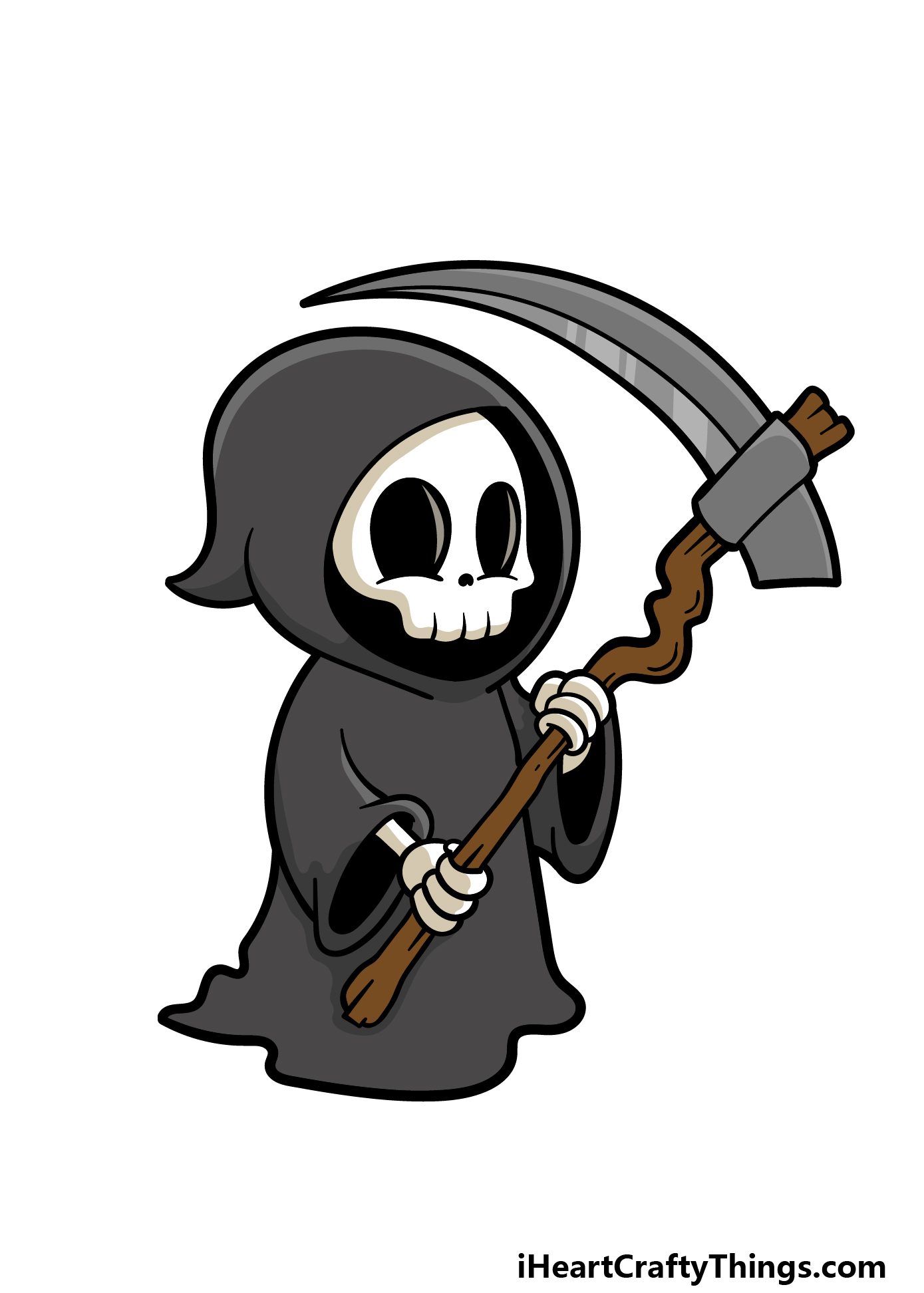 It’s time to finish off this cartoon death drawing to get you ready for the final step! The last detail to add will be the blade of the scythe.

It will go on the end of the handle you drew in the previous step, and it will have a large, curved blade that ends in a pointy tip.

We have it positioned so that it’s over his head, but you could mirror it to face the other way if you prefer!

Once drawn, will you add any extra details or maybe a fun background? 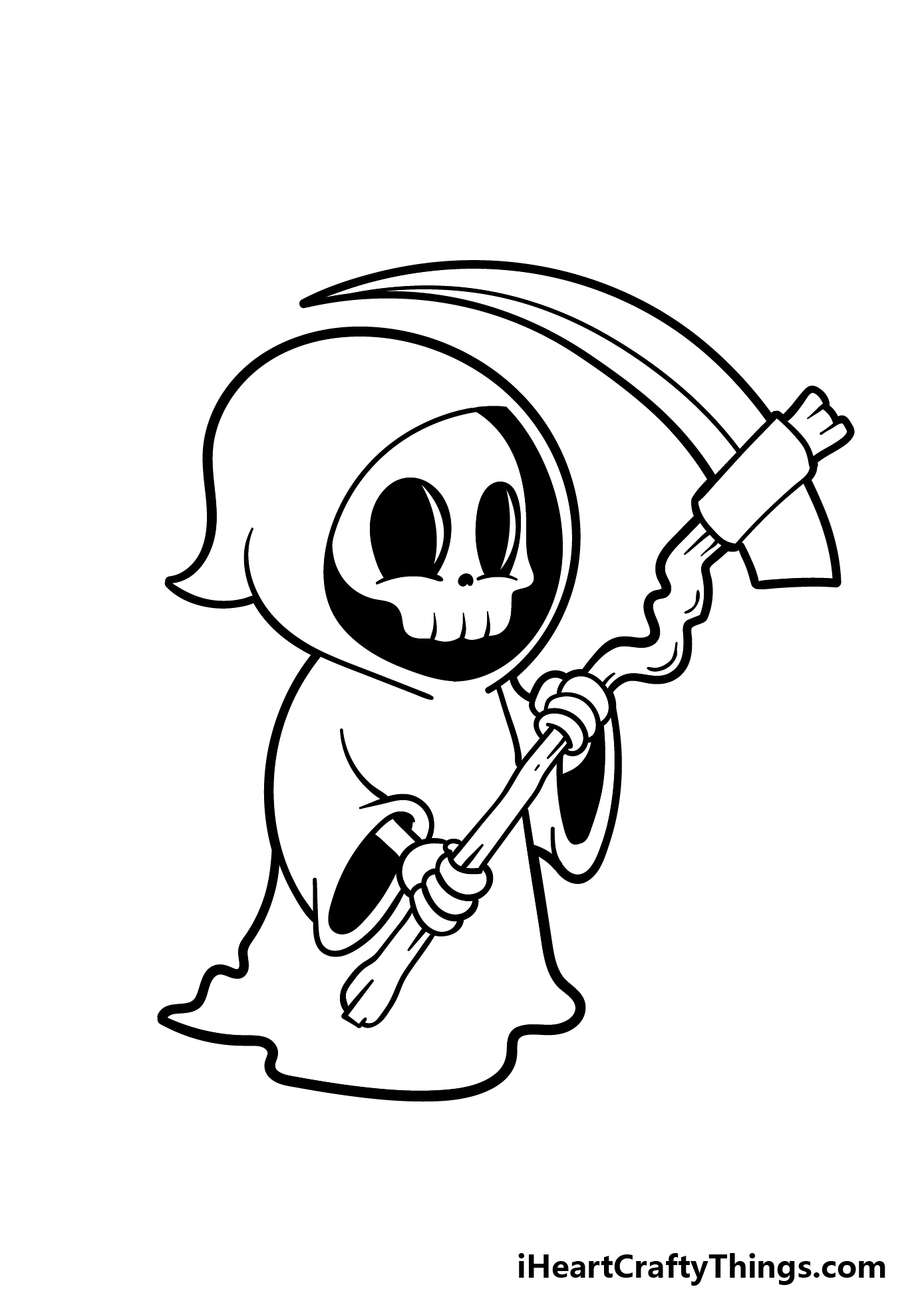 This is the final step of this guide on how to draw a cartoon death, and in it we shall finish off with some color.

Despite its cuteness, this character is, by its very nature, a rather gloomy one. For that reason, we went with a more muted set of colors for this picture in our example image.

Will you use similar colors for your own one, or do you think you will go for some other colors?

Make your cartoon death sketch even better with these 4 tips to try out.

This drawing of cartoon death shows a surprisingly cute interpretation of this being on its own. It could be fun to add a little sidekick for this character to make it less lonely!

There are a few creative ways that you could do this. It could be a skeletal assistant or maybe even the skeleton of a pet like a dog or a cat.

These are just a few ideas, but who else could you add to this drawing?

This interpretation of cartoon death has the traditional scythe used by the Grim Reaper, but you could add other tools of the trade to make this character even more well equipped.

For example, he could use a vhecilce that could have a skeletal design or maybe an even fancier scythe.

There are lots of creative tools of the trade that you could use for this character, so what would you like to equip him with?

This cartoon death drawing has a real halloween feeling to the design, so you could also add some fun decorative details you may expect around the holiday.

For a few examples, you could add some flying bats, cobwebs, gravestones or maybe a mist covered full moon.

These are just a few ideas for some spooky details to add, but they are far from the only ones.

What are some other details you could add to give this drawing a Halloween twist?

Taking our previous tip even further, you could also create a background setting for this drawing. For an example, if you added some gravestones then this character could be patrolling a graveyard.

That’s one idea, but you could also have him in a more normal setting to create a visual contrast. He could be on the street of a regular suburb or maybe in a setting like a shopping mall.

Therse are just a small handful of places you could use, but where else could this cartoon death be?

Your Cartoon Death Drawing is Complete!

You did such a great job working through the steps of this guide on how to draw a cartoon death! We hope that the steps made this a fun and easy experience to take on.

Now you can take it further as you add your very own ideas, additions, details and color choices!

If you enjoyed this guide, there are plenty more where it came from on our website. Check in often to never miss out on the new guides we have coming soon!

We would also love to see how your cartoon death drawing came out, so please share it on our Facebook and Pinterest pages when it’s done. 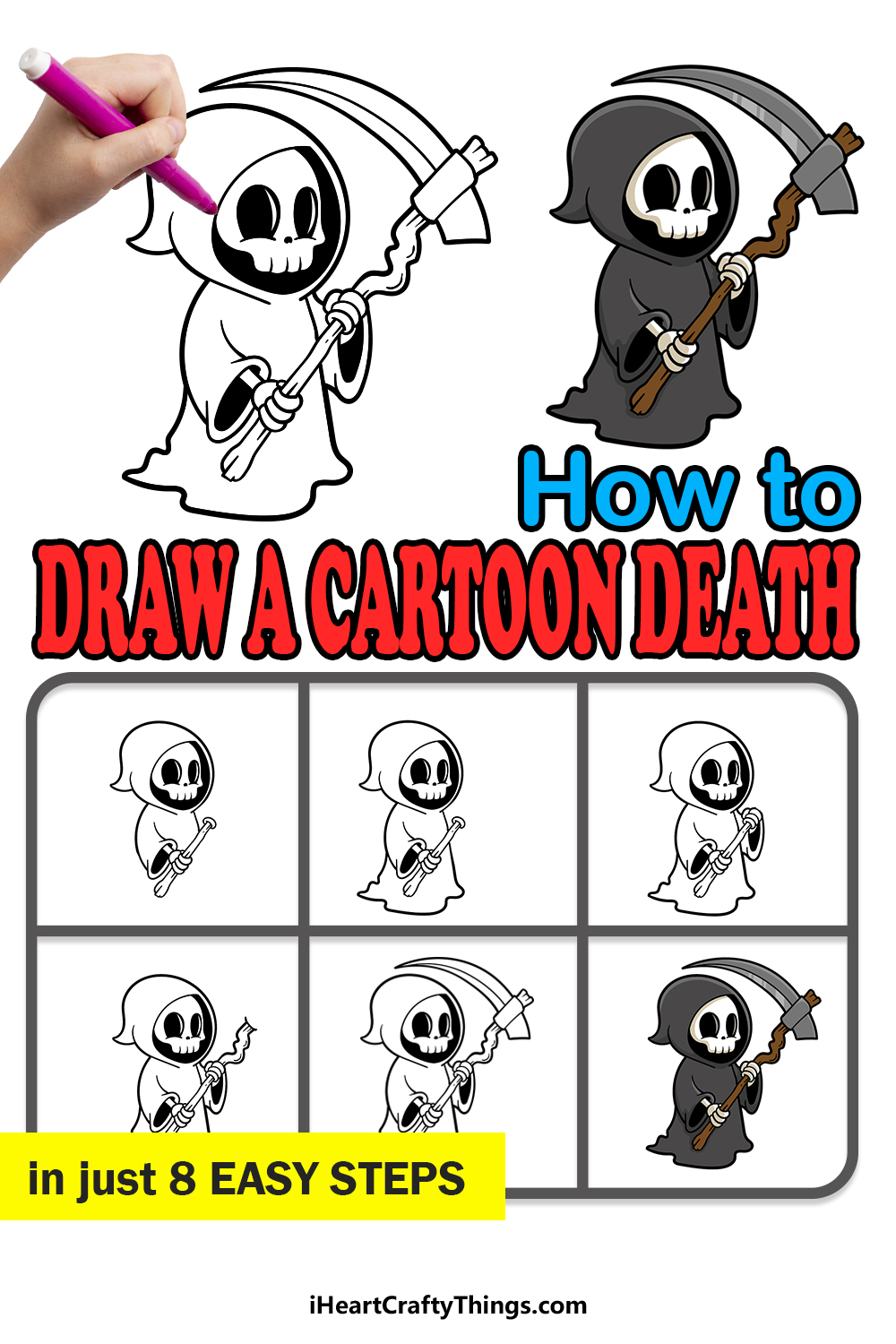 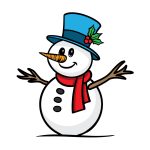 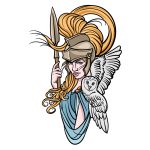