We live on a big planet, and it used to take many days and weeks to get from one side of the planet to the other.

These days, we have incredible aircraft that can take us from A to B much quicker, and now you can learn how to draw a cartoon airplane to celebrate this incredible technological marvel.

By the end of this tutorial, you will have everything you need to create a great picture of an awesome airplane.

You will also be able to add your own backgrounds and extra details to the mix, and it will be great to see how you finish off this picture.

With that, you are ready to begin this amazing step-by-step guide on how to draw a cartoon airplane in just 6 easy steps! 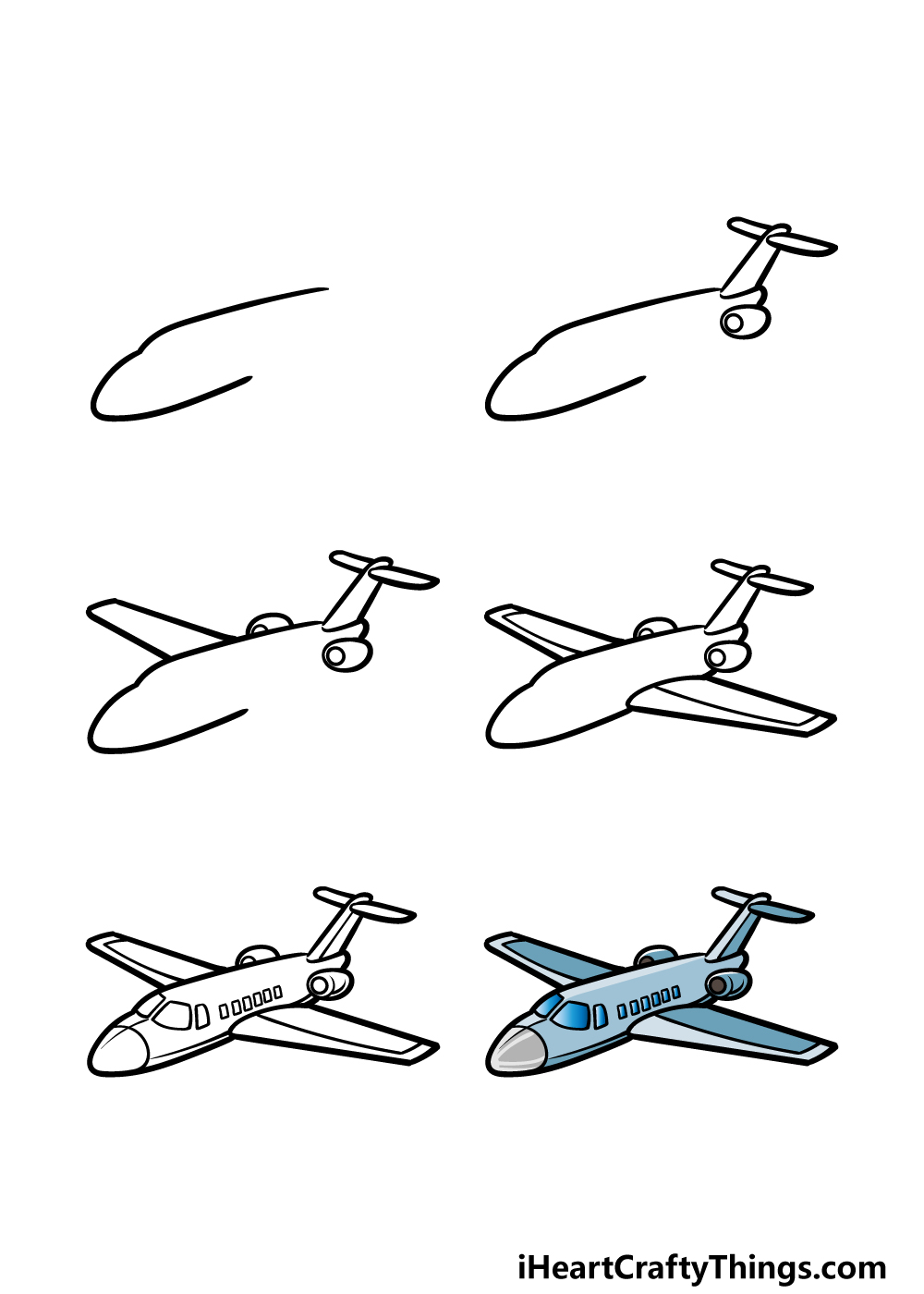 How to Draw A Cartoon Airplane – Let’s get Started! 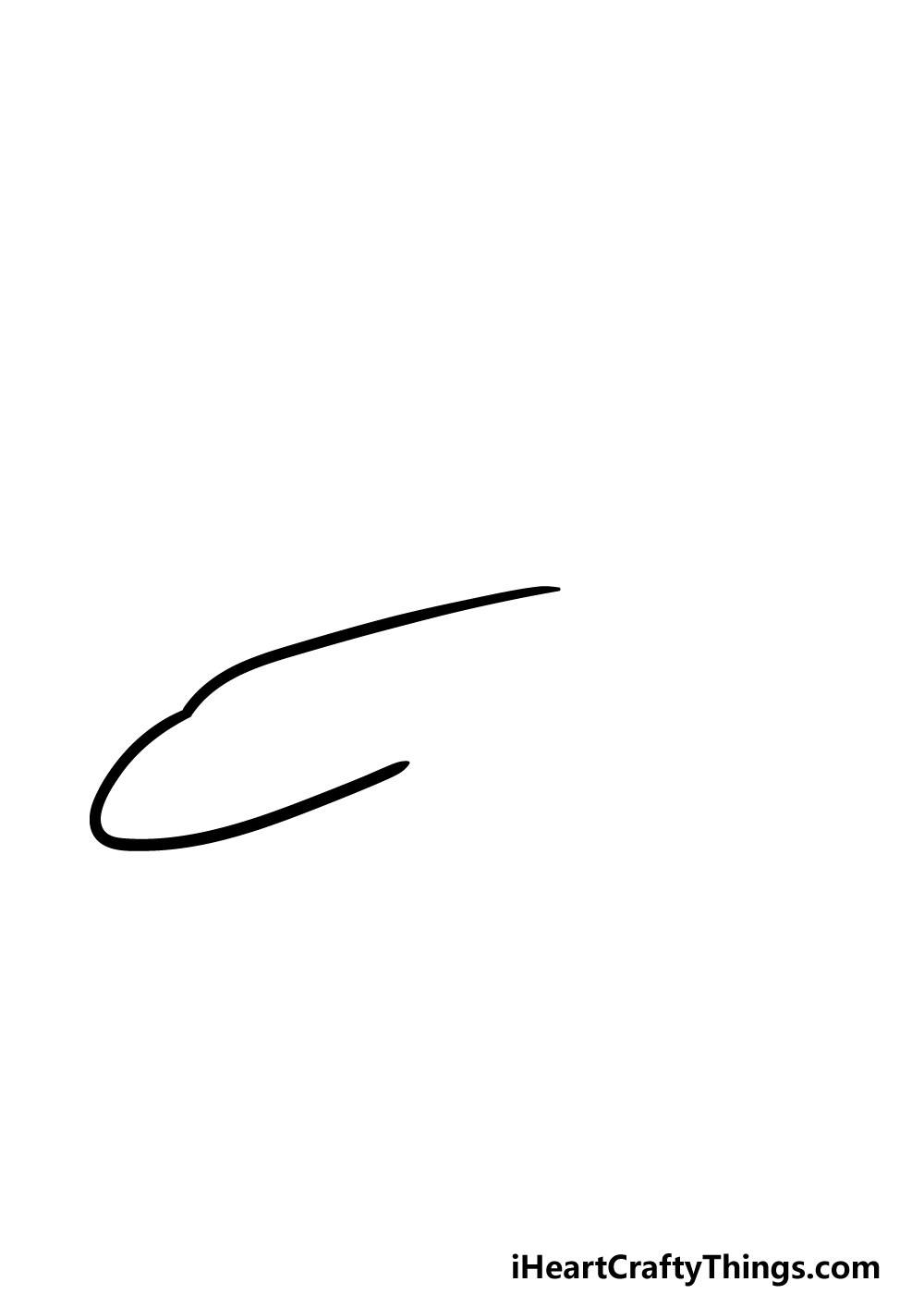 We will begin this guide by drawing the front of the aircraft. Even though this is a cartoon version of an airplane, we will still keep it fairly realistically proportioned.

To draw this front section, we will be using some curved lines that connect to one another to form the front and top of the airplane.

There won’t be any details added yet, but we will add some very soon as we move on to the next steps of this guide.

Step 2 – Draw the tail of the plane 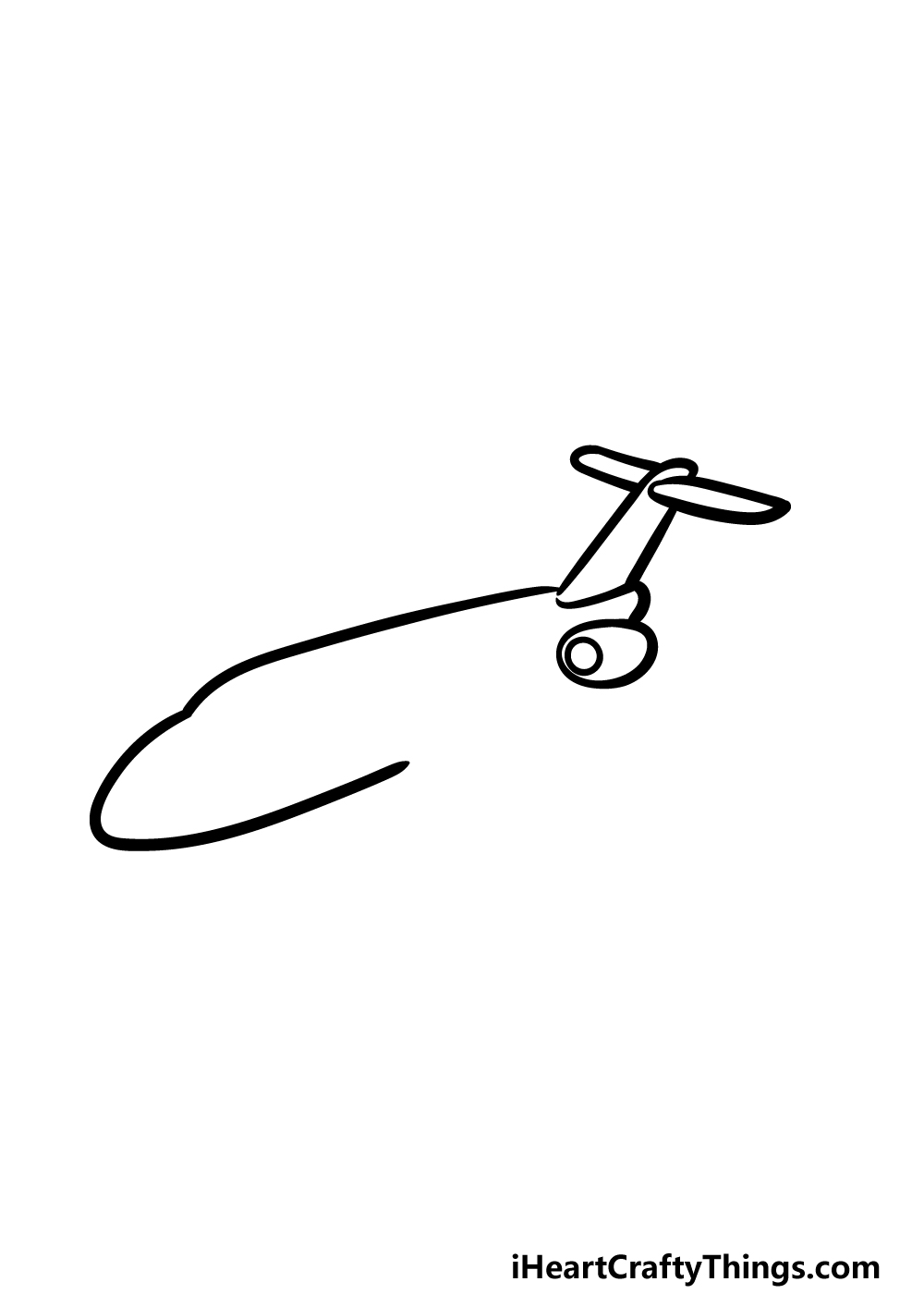 In this second step of our guide on how to draw a cartoon airplane, we will focus on the tail of the plane. First, we will be drawing the horizontal and vertical stabilizers.

This is the sort of T shaped part sticking off of the top. The body of this portion will be drawn using a tin, rounded shape, and then there will be two similarly shaped sections horizontally near the top.

Next, we will be drawing the engine at the base of this structure. This will be quite rounded with a thin oval shape near the front of it.

Once you have drawn these stabilizers and the engine, you will be ready for step 3 of the guide!

Step 3 – Now, draw the first wing of the airplane 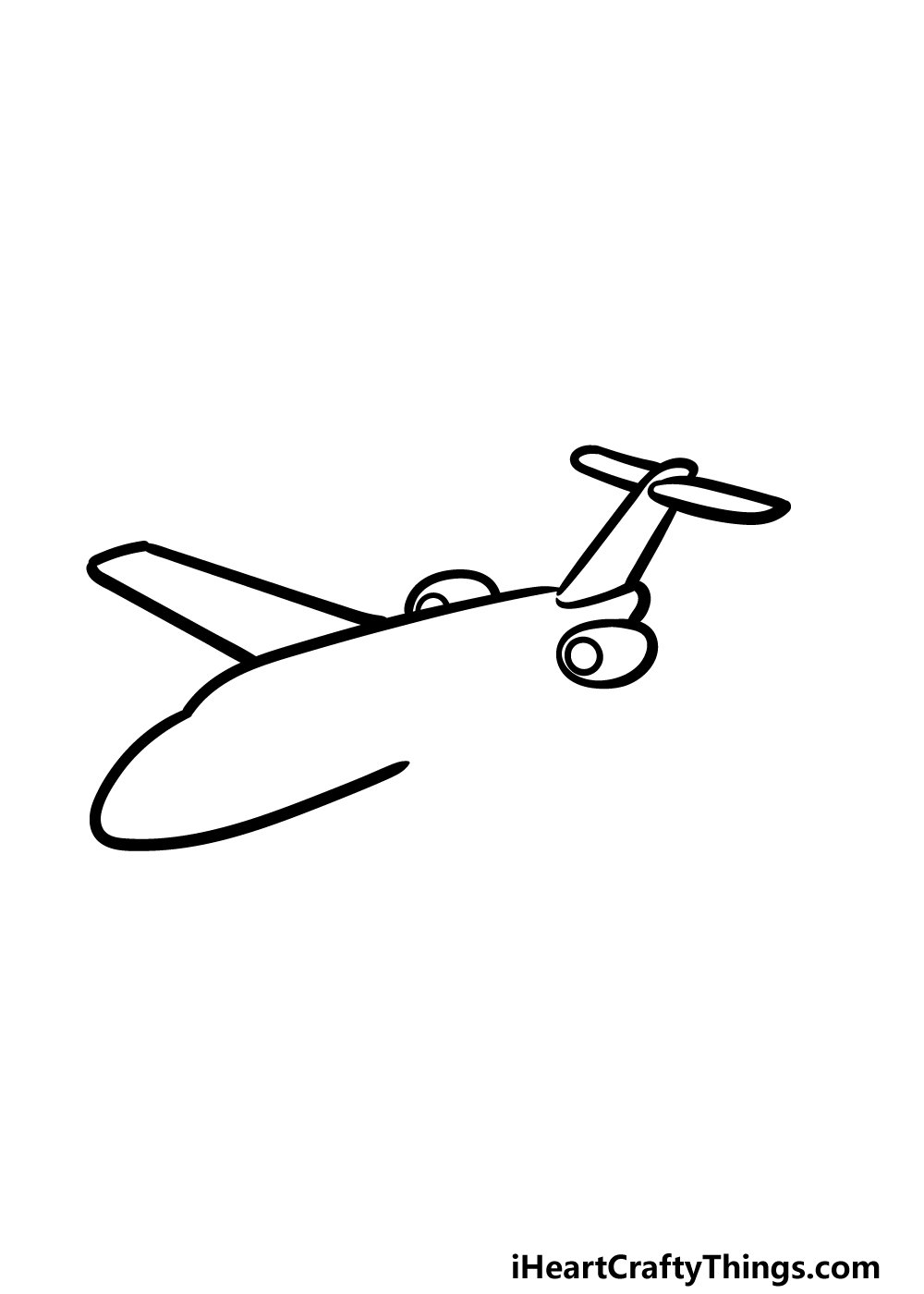 No airplane would get very far off of the ground without some wings, so we shall draw the first of these wings in this part of the tutorial.

This wing will go on the left-hand side of the image, and it will be quite long and squared in shape.

Then, we will also be adding another engine to that same side of the plane. This one will look rather similar to that first one, except more of this one will be obscured from view

That’s all there is to it for this part of your cartoon airplane drawing, so let’s keep building this aircraft in the next step!

Step 4 – Draw the other wing and some detailing 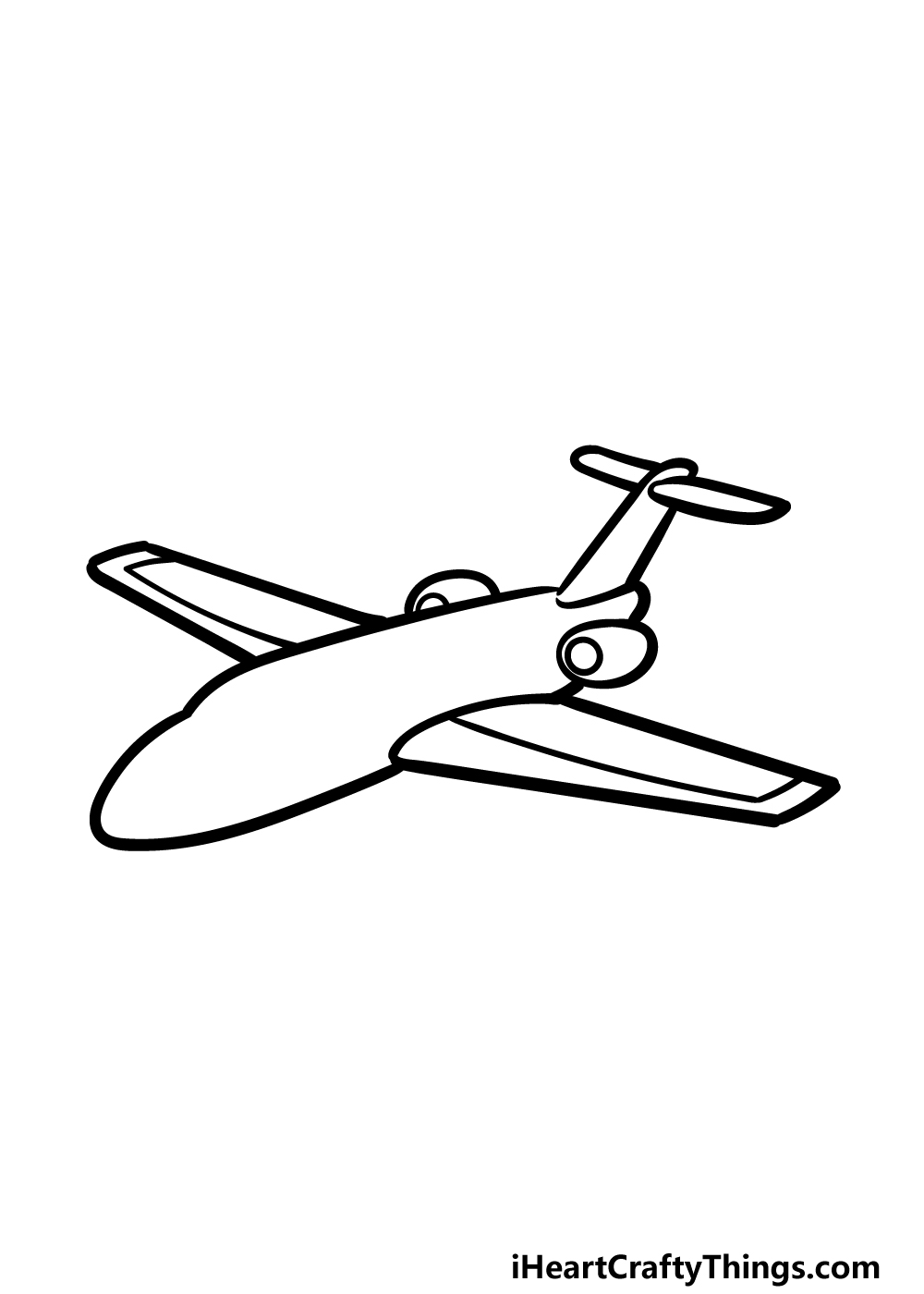 Before we finish up the final details and touches in the final step of this guide on how to draw a cartoon airplane, we will now be adding the other wing along with some additional details.

This wing will look very similar to the previous one, but due to the closer perspective it will look a bit larger.

There will also be a rounded line at the base of the wing where it connects to the body of the airplane.

Then, you can finish off these wings by drawing the flaps onto them. These will be drawn as some very slightly rounded lines that curve sharply near the ends.

The reference image will show you how these flaps should look!

With the wings complete, we can work on those final details in the next step.

Step 5 – Now, you can add in the final details of this cartoon airplane drawing 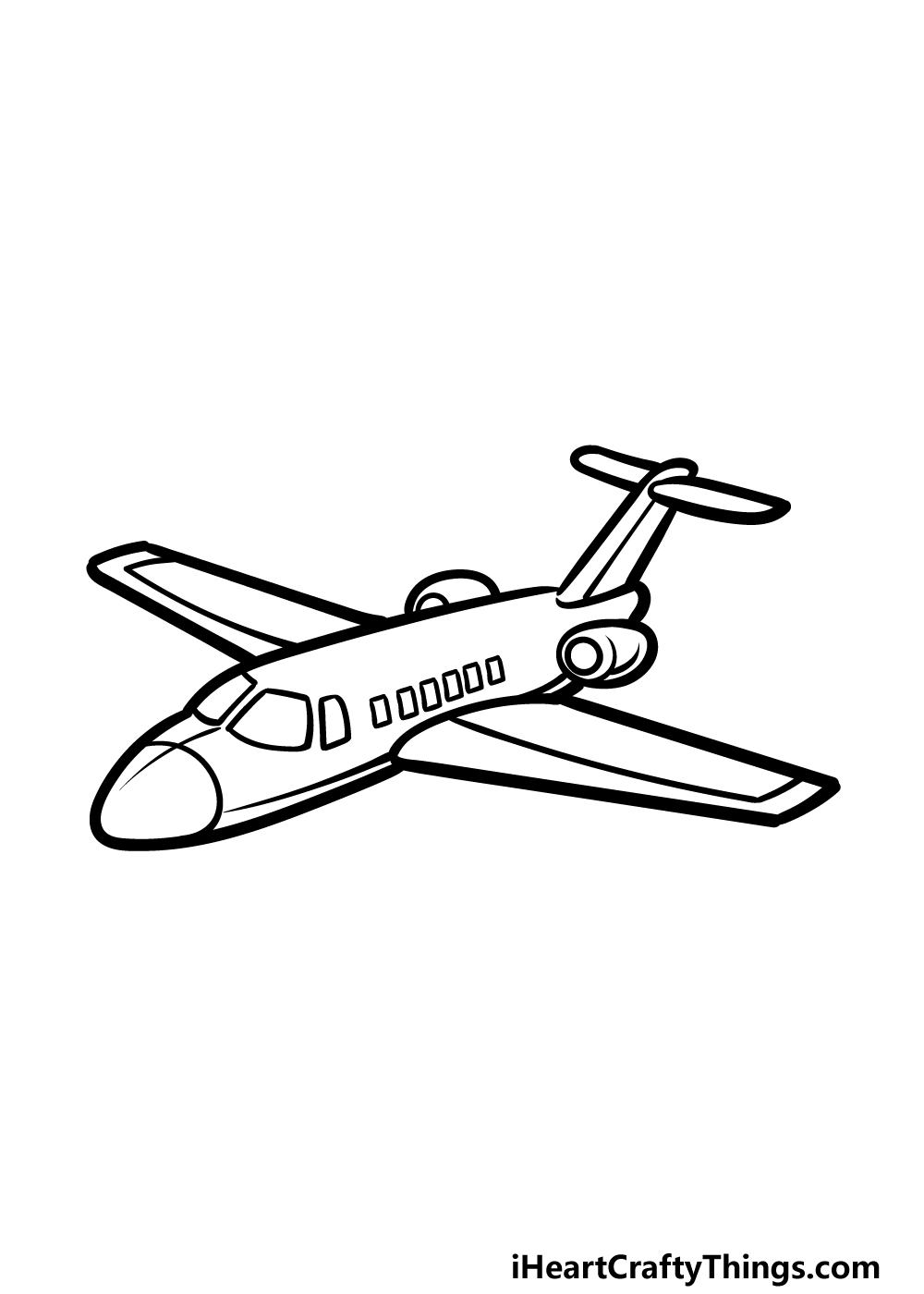 Now you’re ready to finish off this picture with some smaller details. These details will be rather simple, but they will also make a big difference in finishing off this cartoon airplane drawing nicely!

First, use some curved lines for the nose of the airplane, as shown in our reference image. Then, use some slightly rounded square shapes for the front windows of the plane’s cockpit.

We will then finish off with a row of small squares running along the body for the other windows. When you have added these details, you will then be able to add any extra details of your own!

You could add some text or logos onto the plane, and you could also draw a background to show the skies this plane is flying through!

Step 6 – Finish off your cartoon airplane drawing with some color 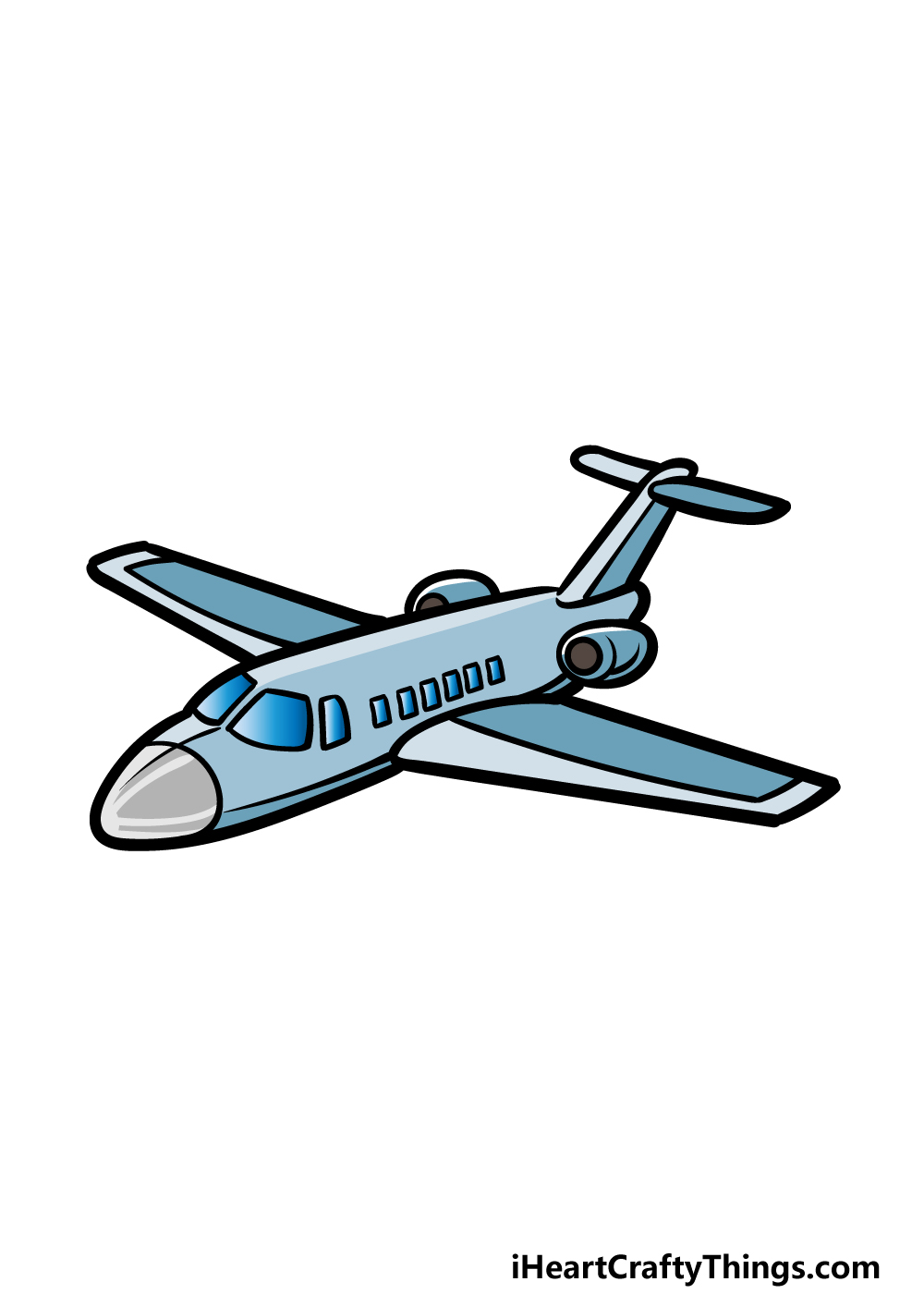 This final step of our guide on how to draw a cartoon airplane will be all about adding some colors to finish it completely.

In our reference image, we showed you just one of the ways that you could go about coloring the plane. We used some light greys and blues throughout the plane, and this gives it a great classic look.

These colors are just some of the colors you could go for, however! You can also use any other color schemes, art mediums or techniques to create your ideal drawing.

What will you choose fot this picture to finish it off? We can’t wait to see what you choose to go for when completing your own version!

These tips are your passport to drawing fun as we make your cartoon airplane sketch even better!

We kept the details on this drawing of a cartoon airplane pretty light so that you could focus on the design of the airplane.

Now that it is done, you could add all sorts of fun details to it. One idea would be to draw some logos or other identifying marks on the airplane.

This could be based on a real famous airline, or you could create a unique one of your own!
What are some logo ideas you have for this cartoon airplane?

Another fun detail you could add would be to draw some people on this cartoon airplane. It would require you to get really close and draw some tiny details, but it would be a fun touch!

For example, you could draw the faces of the pilots in the cockpit and maybe show some passengers in the side windows.

You could always make the windows a bit easier so you have some more space for faces.

There are so many incredible kinds of aircraft, and you could add some of your favorites to this cartoon airplane drawing.

Now that you can draw this one airplane, you could adapt any other aircraft you like to this style.

Whether it’s a helicopter, a jet or maybe a giant Boeing, they will look great flying beside your cartoon airplane that you have created in this guide!

One of the most freeing aspects of aircraft is that they can take us to all kinds of amazing places. You could show this aspect in your cartoon airplane sketch by adding a background!

This could be as simple as showing a blue sky with some puffy clouds behind the airplane. Or you could draw a representation of your favorite place in the world to make it look like the airplane is flying over it.

Where would you like to take a trip in this cartoon airplane in real life?

Your Cartoon Airplane Drawing is Complete!

That will conclude all the steps in this guide on how to draw a cartoon airplane! We hope that this guide was fun and easy for you to use and that you had an amazing time working on it.

We always want to make the creative process one that is free from frustration, and we hope that was what you experienced!

When you would like to take on a new drawing guide to enjoy, head on over to our website for more to enjoy! We will be uploading new guides frequently, so check in often to make sure you never miss out on the fun.

We can’t wait to see the way you went about completing this awesome depiction of an incredible aircraft! 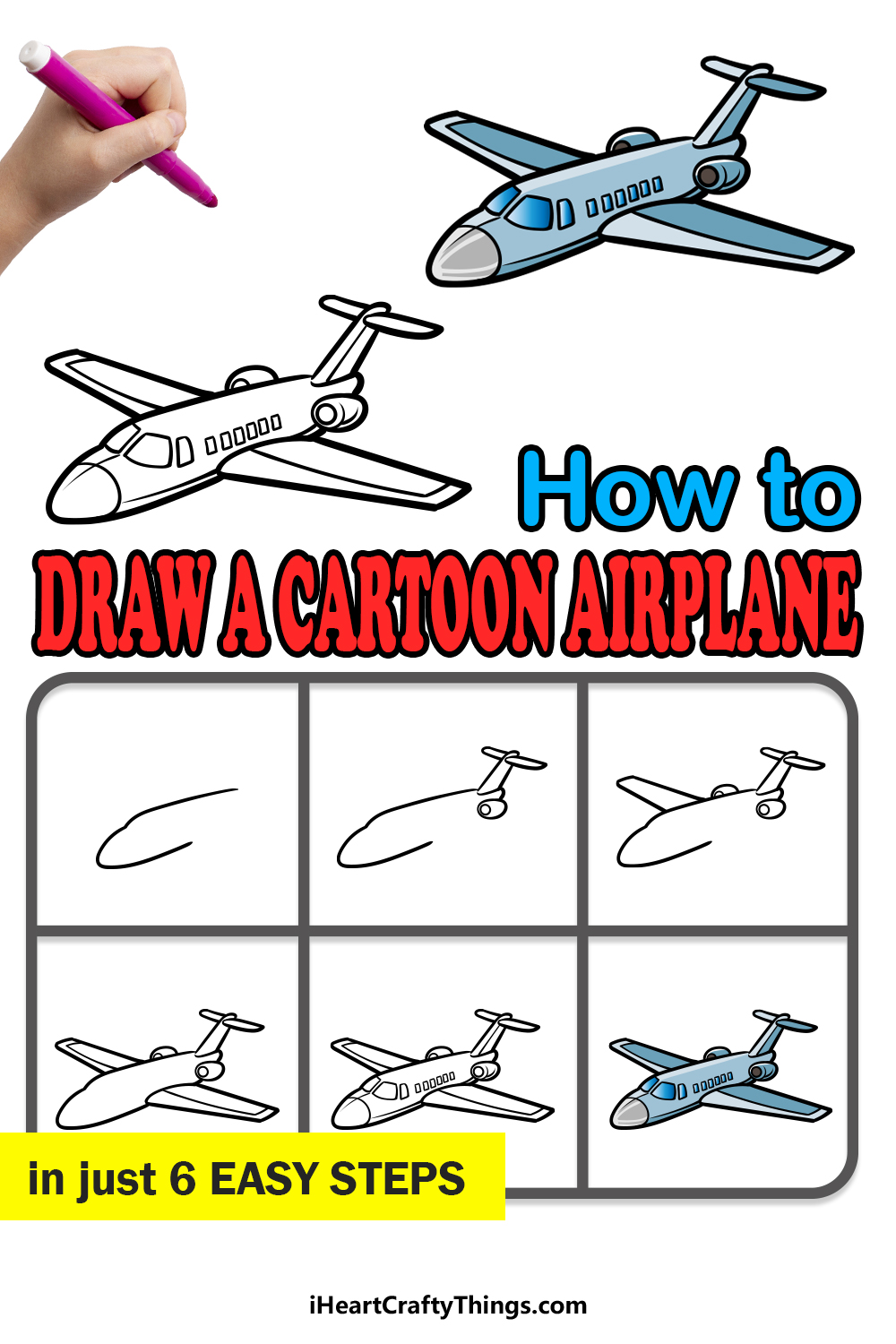 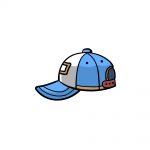 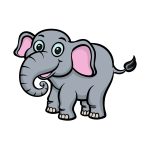