There are many different superheroes that have incredible and awe-inspiring powers.

One of the most popular superheroes in recent years is Batman, and he managed to achieve this popularity despite not having any powers! Instead, he uses his wits and awesome gadgets to protect the gothic city of Gotham.

With millions of fans around the world, many of them would like to learn how to draw Batman to represent their favorite hero.

This guide will show you how you can recreate this awesome hero!

Suit up for this step-by-step guide on how to draw Batman in just 6 easy steps! 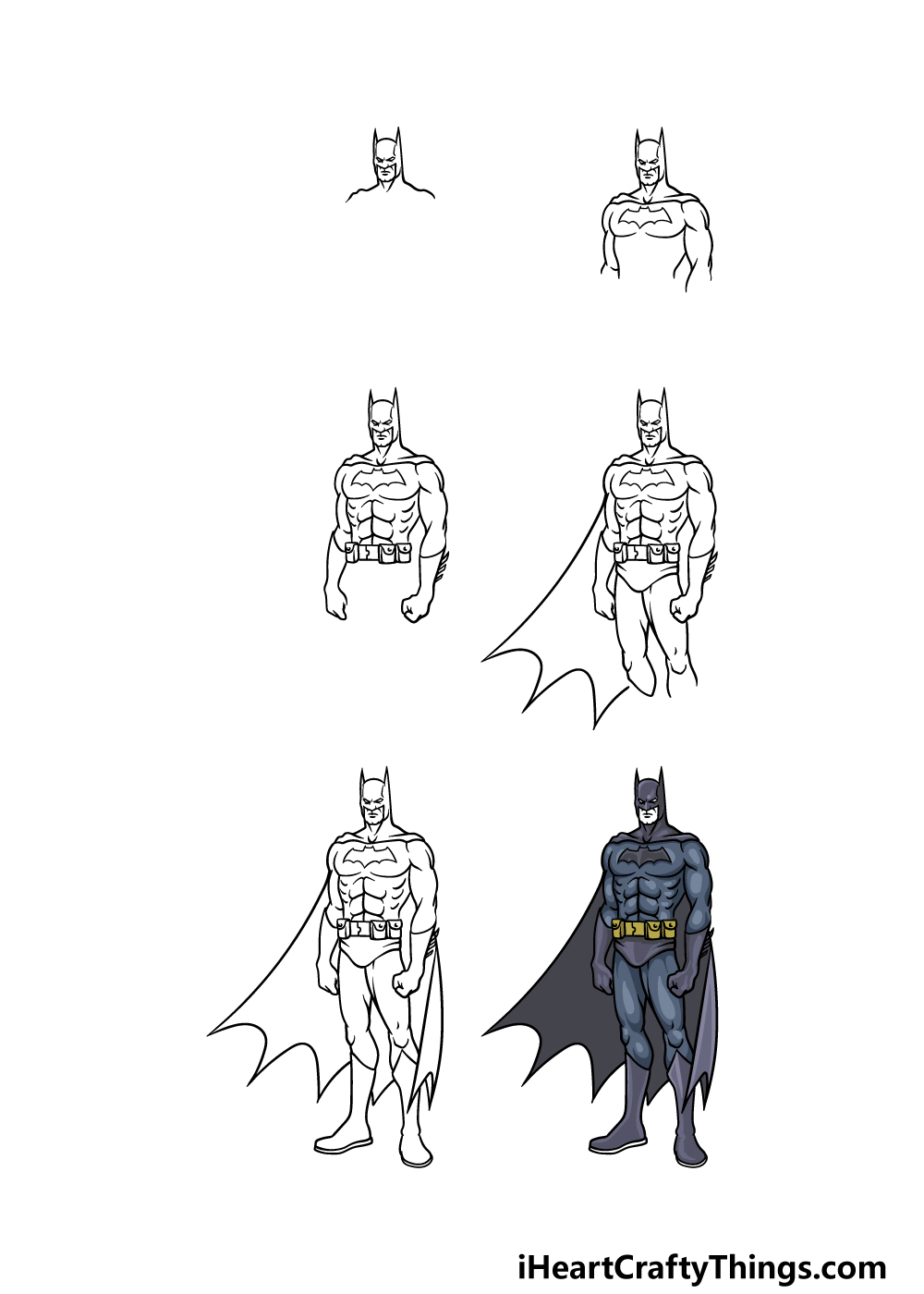 How to Draw Batman – Let’s get Started! 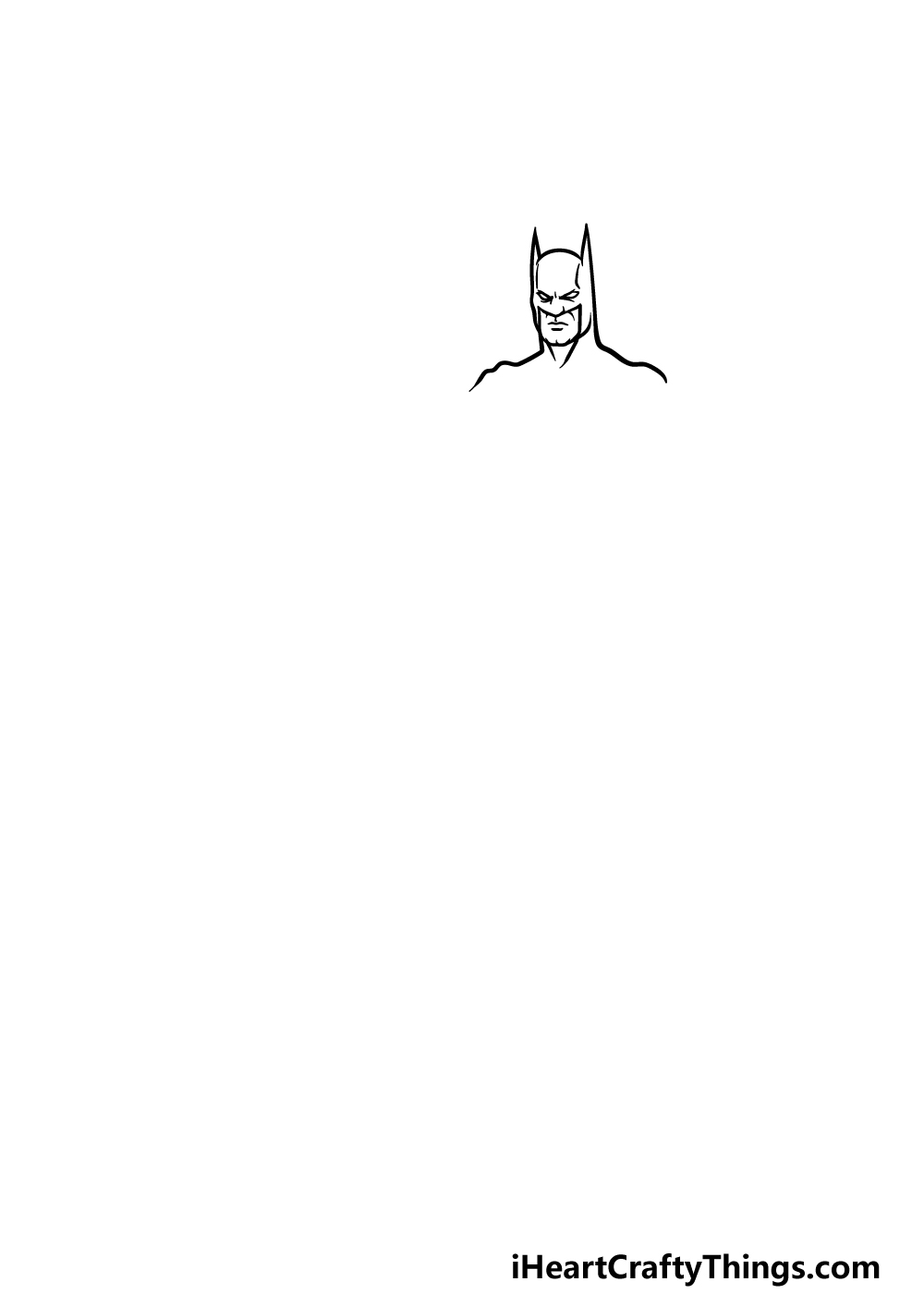 We will start this guide on how to draw Batman with his head. Batman wears a distinctive mask that has two pointy ears on top.

His eyes also appear blank and white, and there is also an opening in front of his mouth and chin.

This is quite a detailed drawing, so be sure to refer closely to the reference image as you draw!  You could start off by drawing a rough head shape using a pencil to make it easier.

Then, add some of the finer details such as the pointy ears and his serious-looking eyes. Then, be sure to add his facial details such as his nose and mouth, and then add some details for his chin and some lines above his eyes.

Finally, draw some lines beneath his chin for the curve of his neck, and then finish off by starting his shoulders with some more curvy lines.

Step 2 – Next, draw his chest and arms 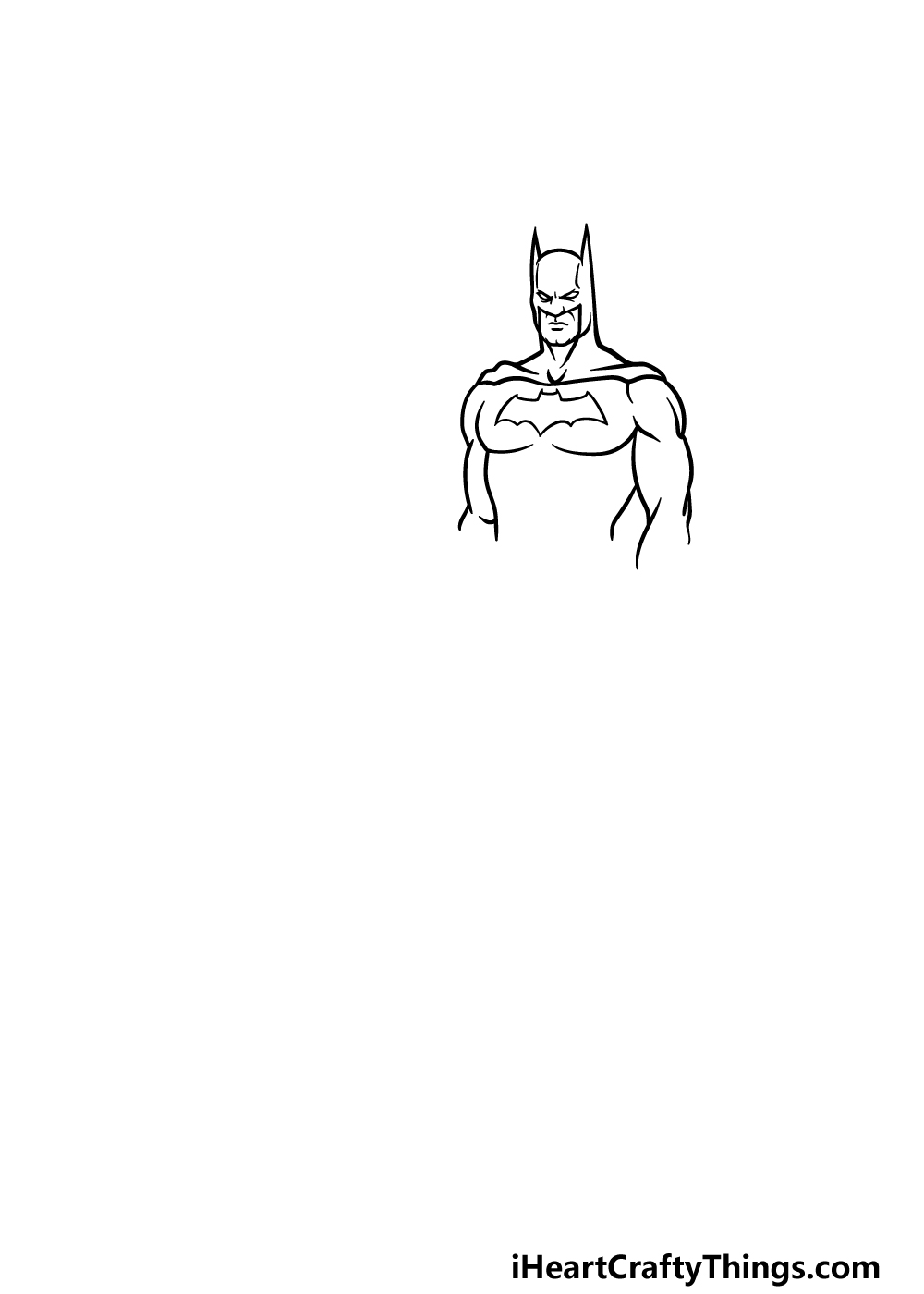 For the second part of your Batman drawing, we will draw his chest and start his arms. First, finish off the base of his mask that extends down to his shoulders.

Then we will use some rounded lines for his shoulders, and then use some more for the muscles of his arms.

Once those have been started, we can move on to his chest. This will be drawn with some rounded lines, and then we will be drawing the signature bat symbol on his chest.

Finish off with some more rounded lines for his waist, and then we’re ready for step 3!

Step 3 – Now, finish off his arms, waist and belt 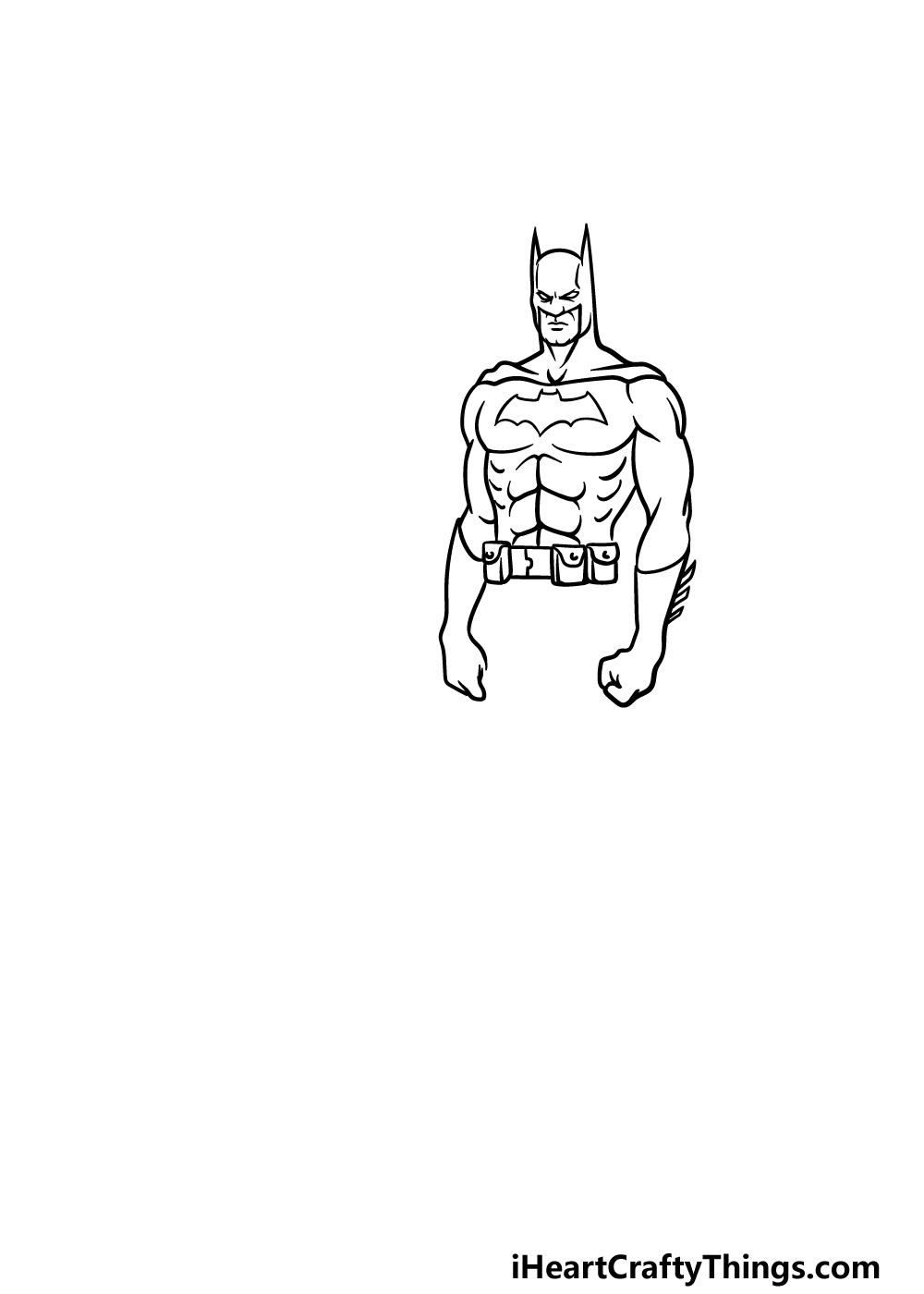 We will be working on a few aspects for this part of our guide on how to draw Batman. First, we will draw the rest of his arms.

His gloves extend almost up to his elbows, and they have three spiky parts poking off of them. Next, we will be drawing the musculature of his chest and waist using lots of smaller curved lines.

Batman is well known for his utility belt full of gadgets, and we will draw that now as well.

Simply draw some small pouches attached to some horizontal straight lines to draw his belt, and then it’s time for step 4.

Step 4 – Next, start drawing his cape and legs 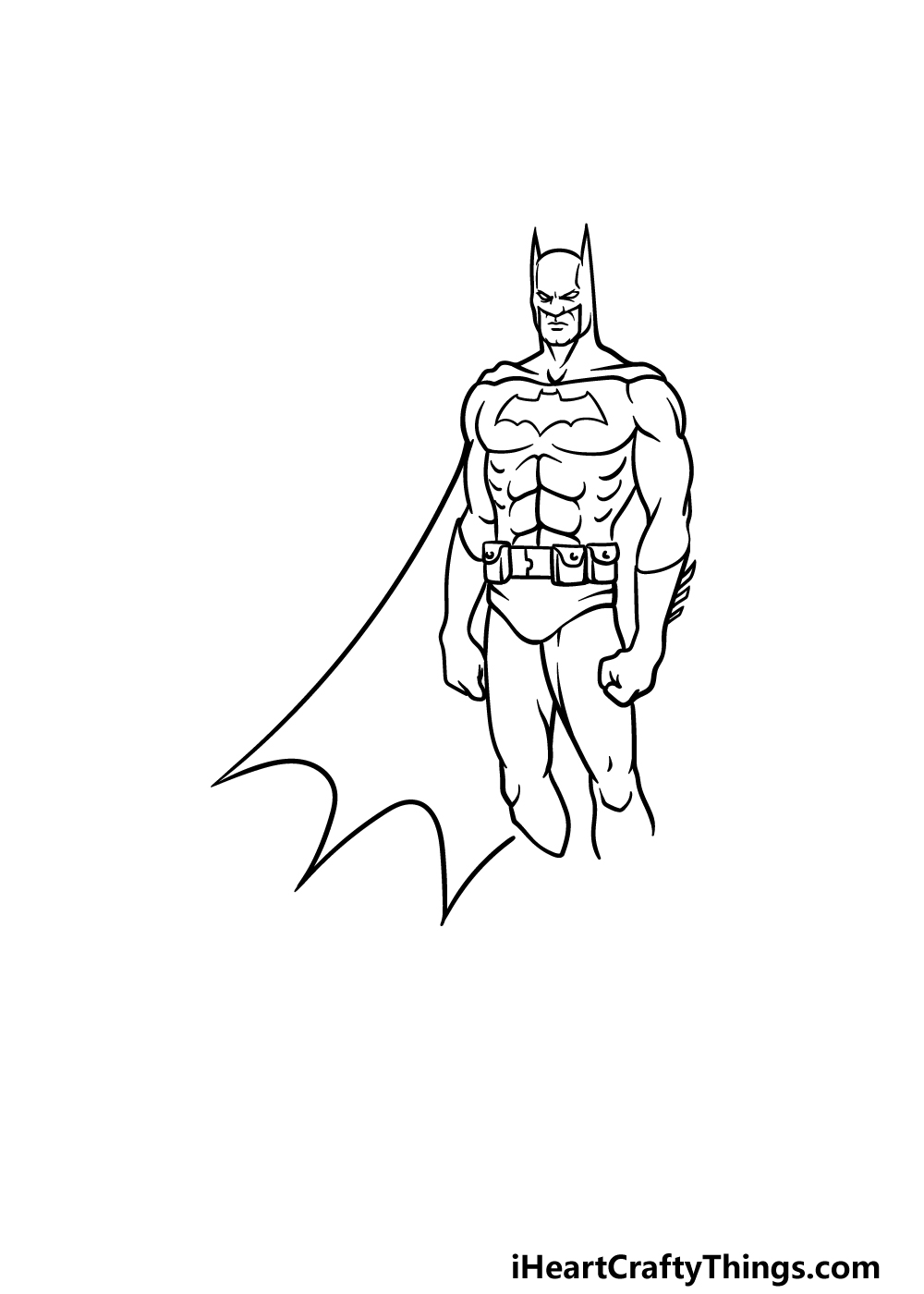 Batman wouldn’t look as cool without his cape, so we will start to draw that now! To draw it, extend a curved line down and outward a bit from the arm on the left.

This cape will also have some spiky curves at the bottom of it. Then, we will be using some more curved and rounded lines to draw his hips and the top halves of his legs.

Once it looks like it does in our reference image then we’re ready to move on! 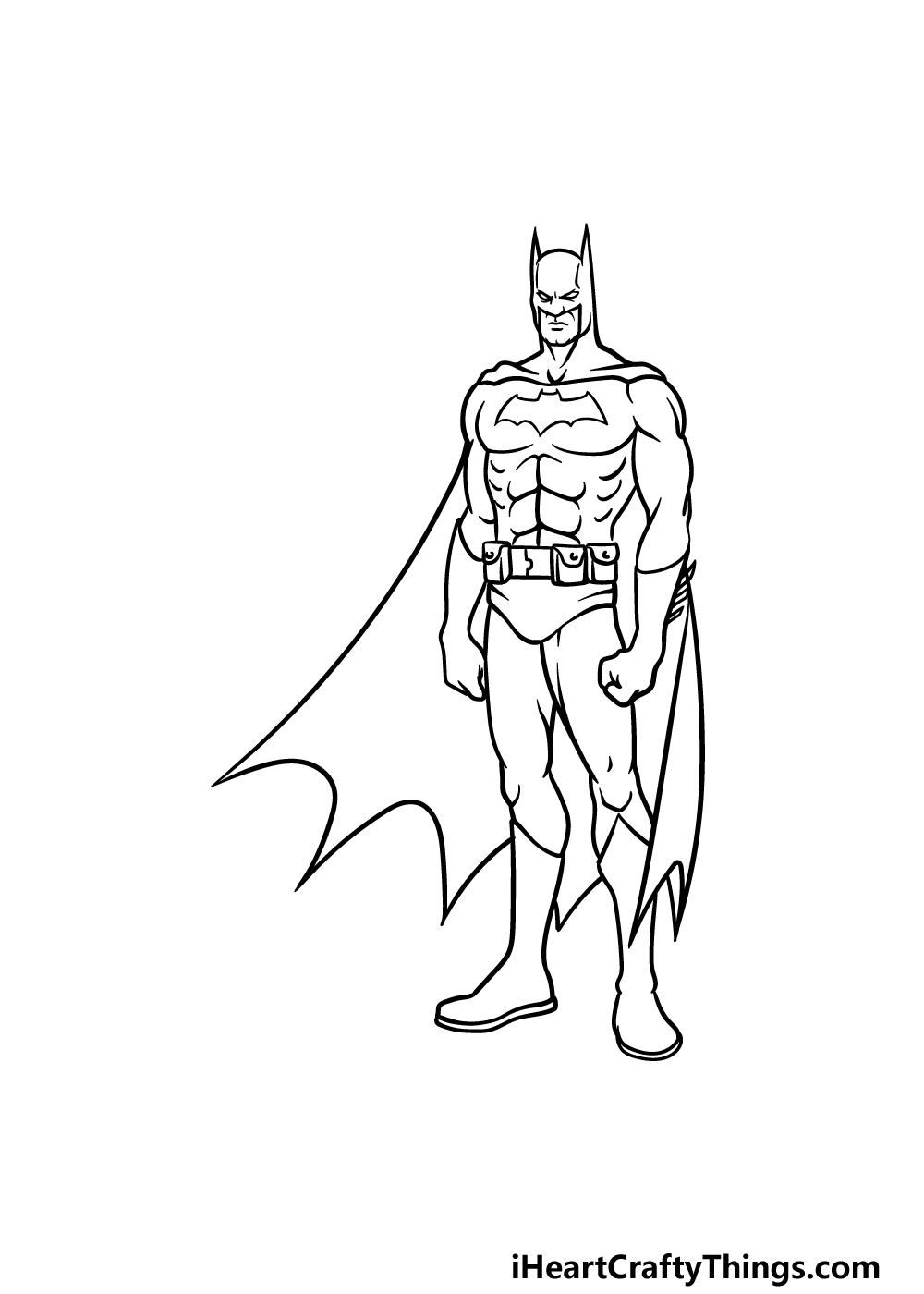 To finish off the final details of this guide on how to draw Batman, we will be drawing some more of his cape and finish off his legs too.

First, draw another long and curvy shape with sharp points at the end on the right-hand side to make his cape look even flowier.

Then, we will finish off his legs. We will be drawing his boots that extend until just under his knees. Once you have replicated his boots as they appear in the image, you’re ready to add some color!

Before you do, this is your chance to add some final details and elements of your own. Perhaps you could draw a background such as him standing high up on a building in Gotham City!

You could also add some more characters such as his sidekick Robin or maybe even one of his enemies such as the Joker. What else can you think of to finish off this Batman drawing?

Step 6 – Finish off your Batman drawing with some color 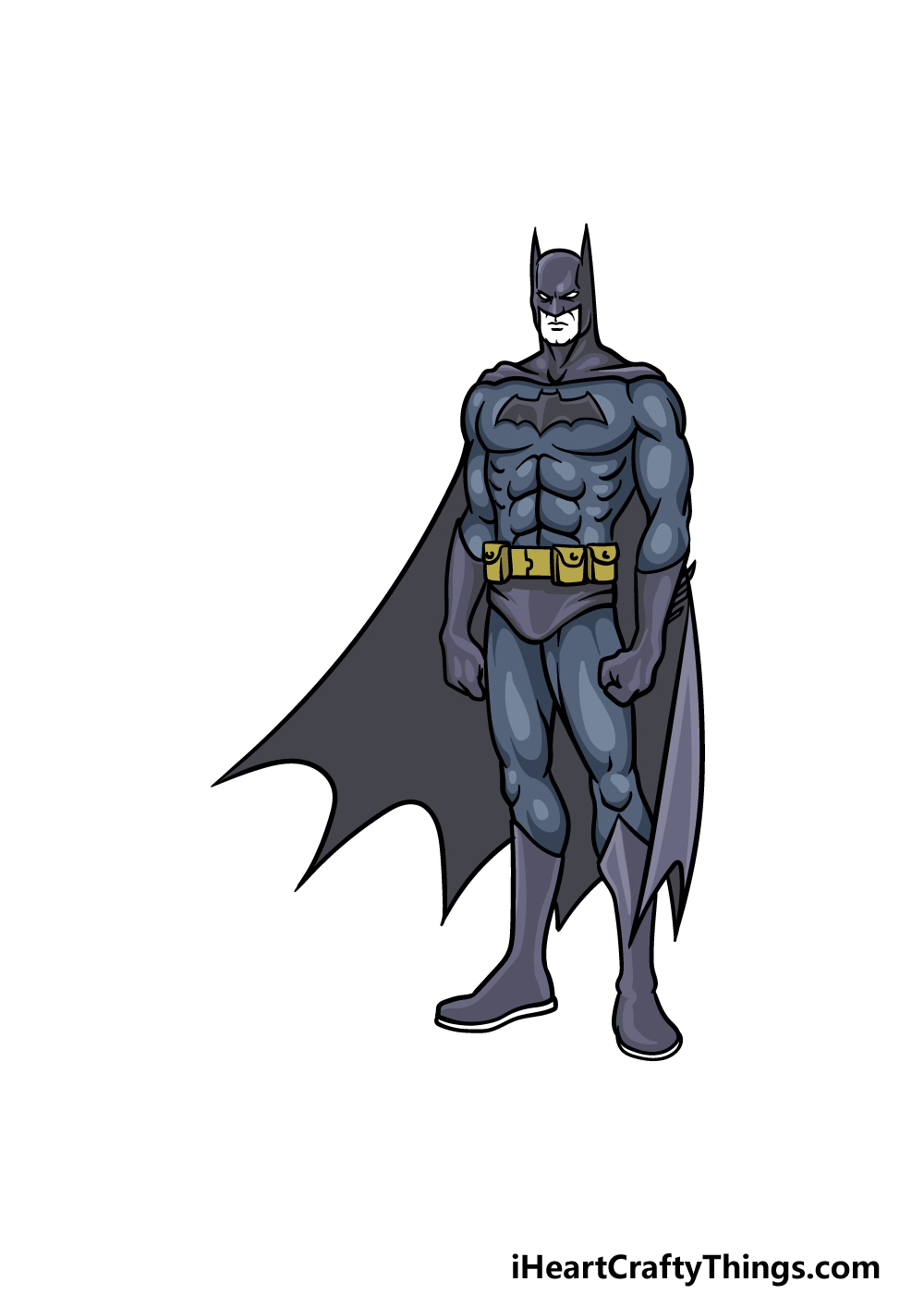 In this final part of your Batman drawing, we will be finishing it off with some color. There are a few approaches you could take to do this, as Batman has had a few different suit variations throughout the years.

In our reference image, we went with his more modern look which has him in darker shades of grey and black with yellow for his belt.

Once you have decided on which Batman era you would like to represent, you can then pick the art mediums and tools you will use to finish it off. You could use some paint variations or go with colored pens, pencils or crayons for a few ideas.

How will you color in your awesome Batman drawing?

Help the Dark Knight rise with these tips on making this easy to draw Batman even easier!

This superhero has appeared in pretty much every kind of media imaginable. That means that he has been portrayed in many different styles, and you could use any of these for this Batman drawing.

The style you use could be really simple, as he has been drawn in a really cartoony style on many occasions. When choosing a style, it all depends on the kinds of drawings you like to do normally.

You might like drawing exaggerated cartoon styles, and if that’s the case then you could adapt this drawing to suit that style.

What other ways could you draw Batman?

As we mentioned in the first tip for this Batman sketch, he has appeared in so many forms of media. That means you are spoiled for choice if you need some inspiration!

All you need to do is pick your favorite Batman appearances to get started. If there is a movie version of Batman you like, then you could use the film and freeze it to help you draw the details.

If there is a particular Batman comic you’re a fan of, then you could use those pictures as well. Once you have your source of choice, you could use it along with the images in our guide to have a great Batman drawing in no time!

Drawing humans is a challenge no matter which style you may be working with. Whether it’s a normal person or a superhero, we all have a basic form of anatomy that can look weird if the proportions are off.

If you want to stick to these more realistic proportions, you could use basic shapes drawn with a pencil to map out the different proportions.

Some art stores will also sell small wooden models that you can pose. These are very helpful when portraying proportions.

If all else fails, you could use a friend or a family member as a reference as you finish off this drawing of Batman!

Your Batman Drawing is Complete!

We hope that you had a great time recreating this iconic superhero in this guide on how to draw Batman!

There were some tricky details and aspects to this picture, so we hope that the steps of this guide made it more manageable and fun for you to recreate this image.

With the guide finished, this is where you can take over to show us how you will finish off this image.

We mentioned a few ideas such as drawing a background or more characters, but there is a lot that you can do. What will you do to finish off this picture?

There are tons of amazing guides like this one on our website covering many different topics, so be sure to visit us often as we upload new ones frequently! 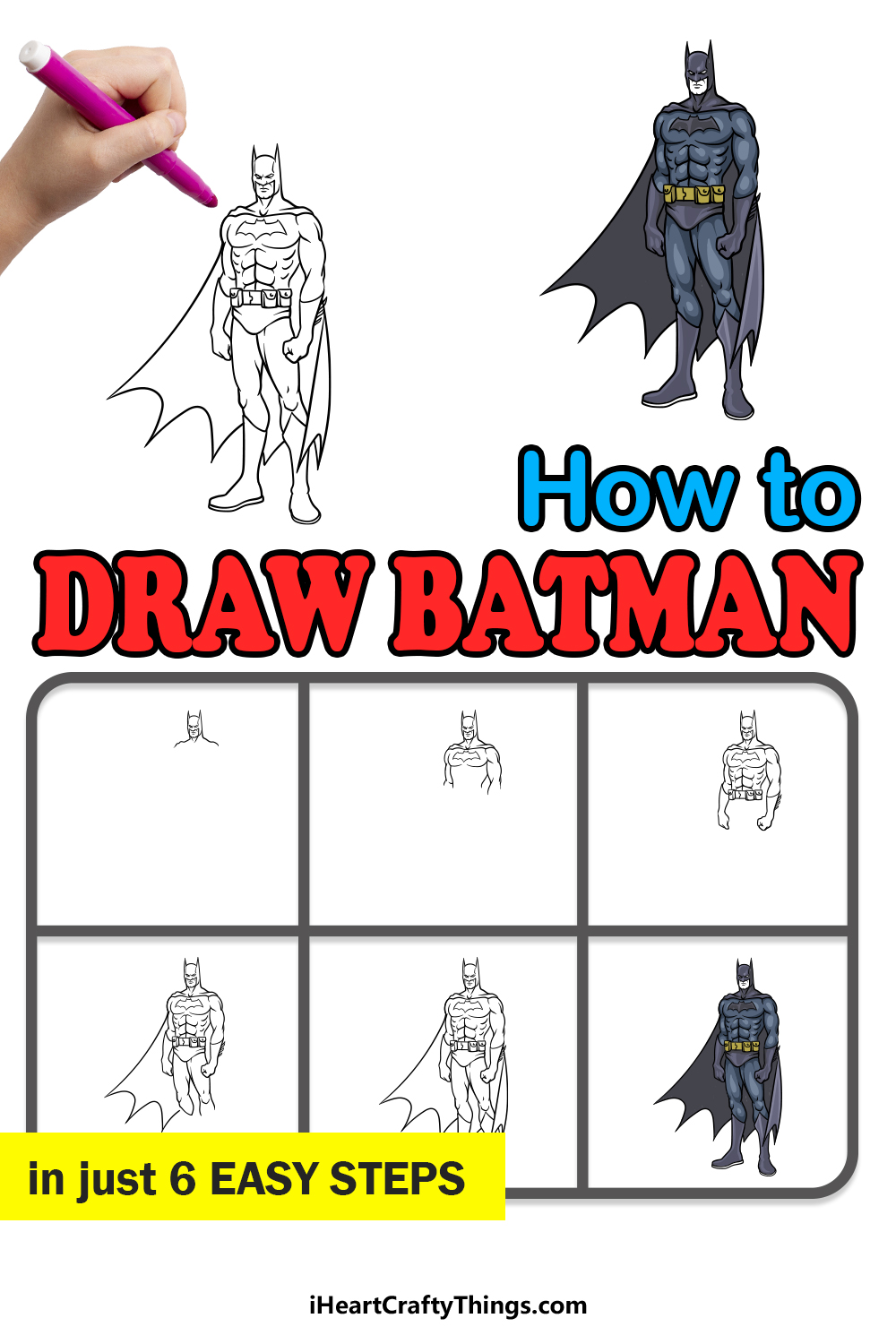 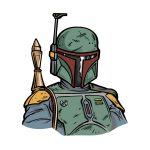 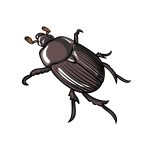