Bats have captured the imaginations of millions of people worldwide over the years. These winged creatures of the night are often used in Halloween imagery or seen flying around spooky castles in movies.

Despite this reputation, they can often be quite cute in real life, and many people love the look of these winged rodents!

If you’re one of the millions of bat fans in the world, you would probably like to learn how to draw a bat. If so, you’re in the right place!

We created this easy step-by-step guide on how to draw a bat in 9 easy steps to make drawing a bat fun and simple for you to learn. 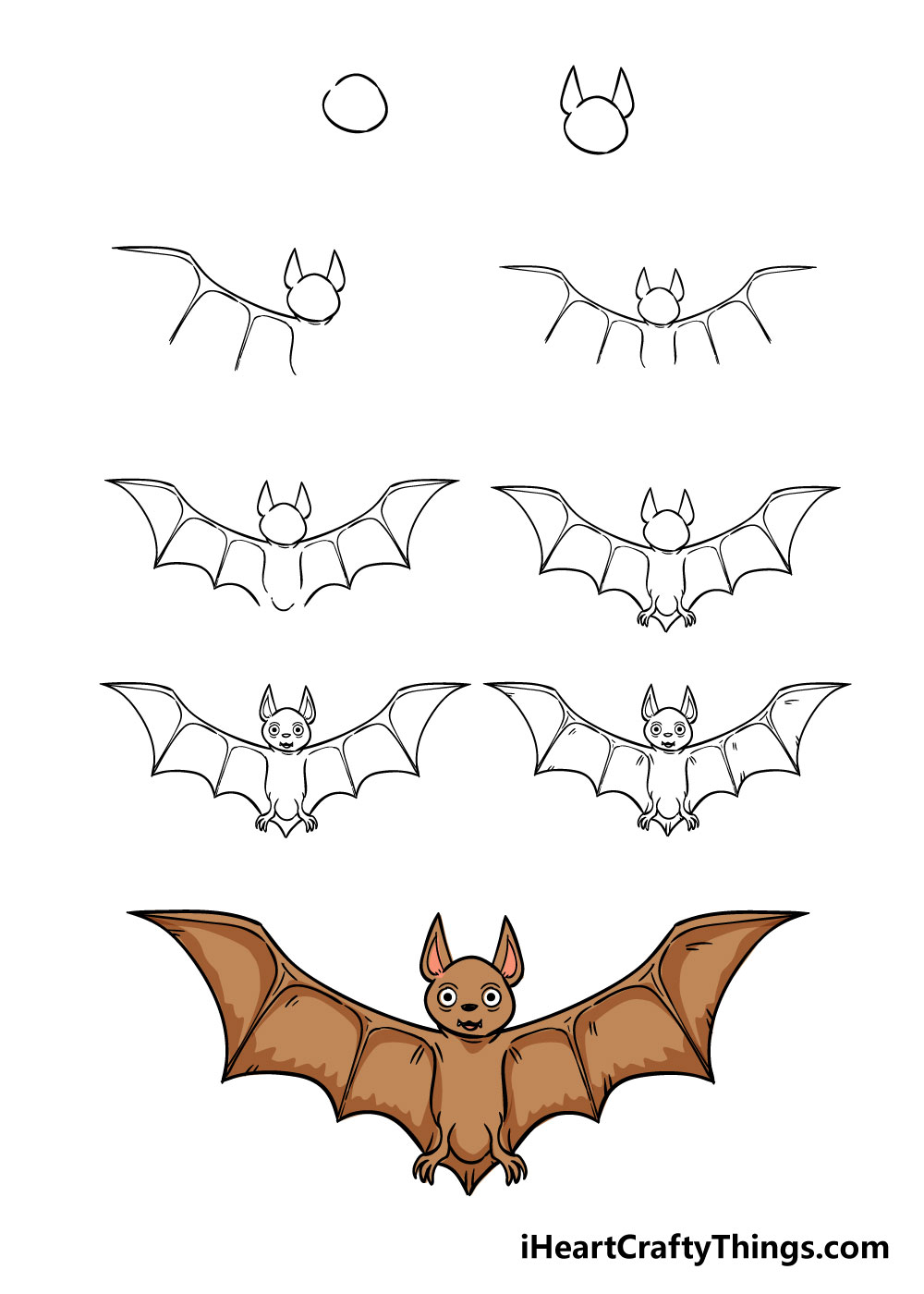 How to Draw a Bat – Let’s get Started!

For the first step in learning how to draw a bat, we will be starting off with a small circle.

The circle doesn’t have to be perfect, and using a slightly ragged line for your circle will make your bat look a little furry.

Be sure to leave a small gap in the circle in the same place as in the reference image! 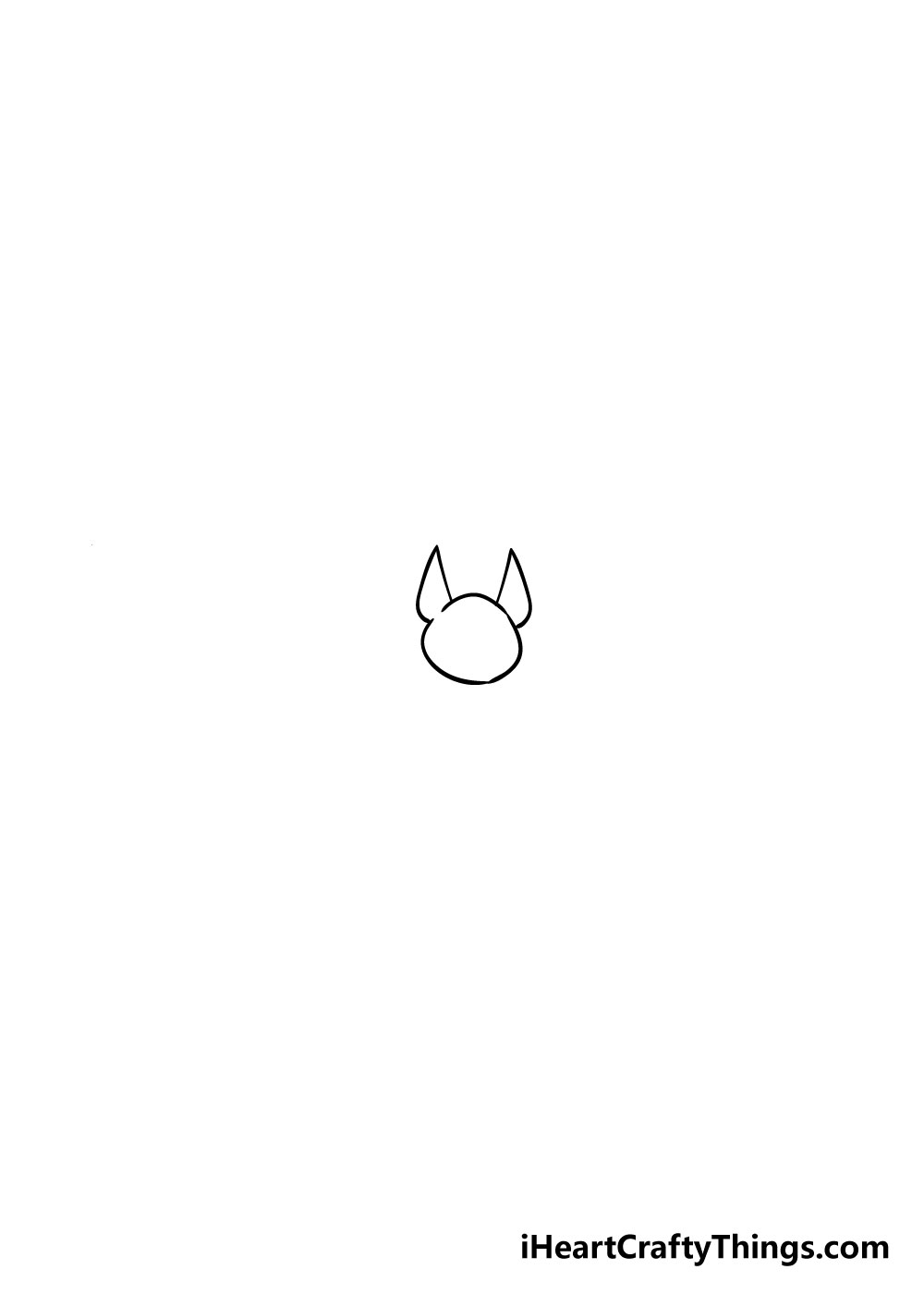 Once you have the head of your bat drawing, you can add the pointy bat ears to it.

To do this, simply draw in two straight lines with two curved ones coming down from them as you can see in the image.

Step 3 – Next, draw in the top of the left wing 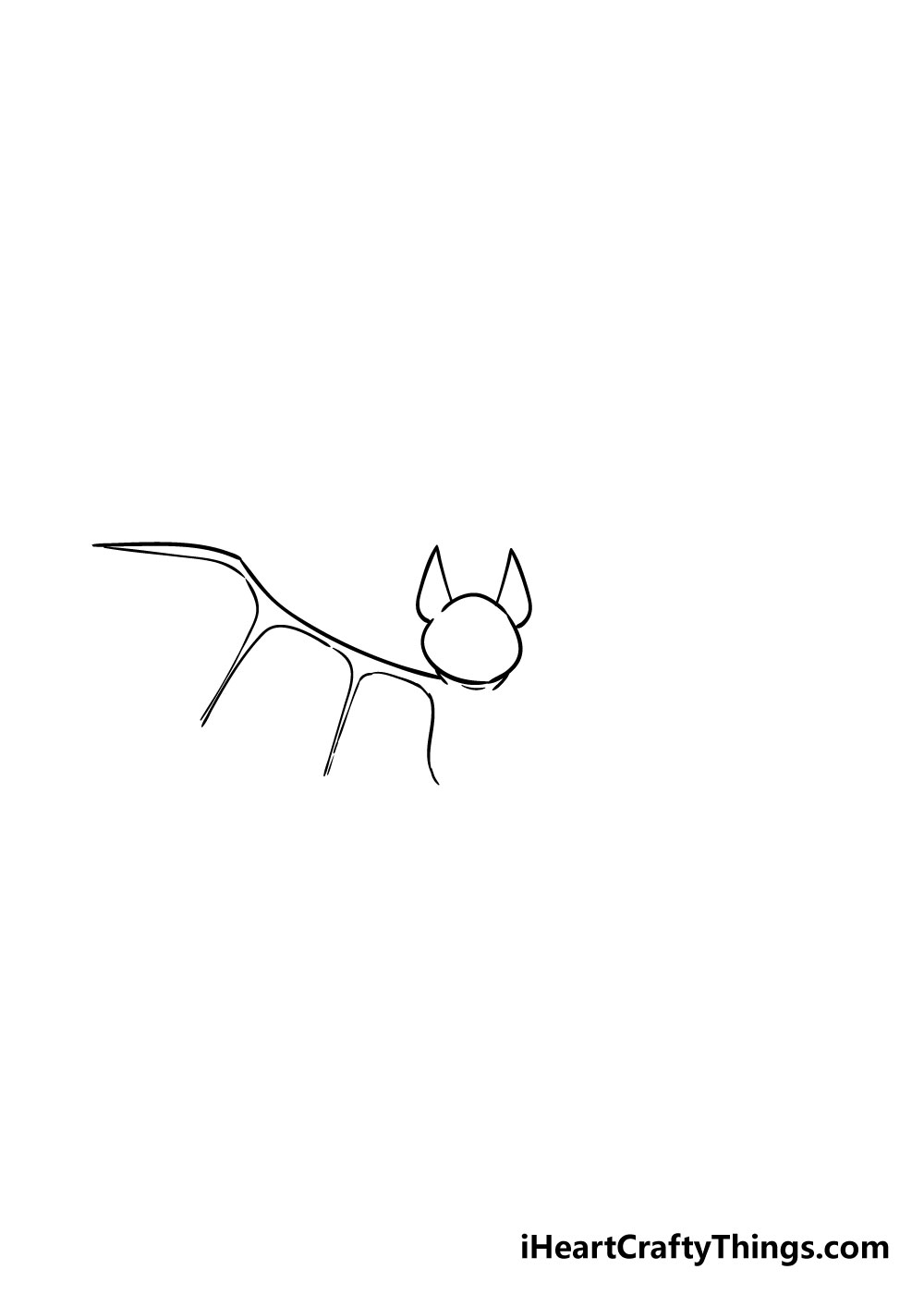 Now that you have the head and ears of your bat drawing, you can start to draw in the first wing. Following the reference picture will be very helpful for this stage!

Going slowly and carefully, draw in the frame of the wing as you can see it in the picture. You will be using a combination of straight and curved lines to do this.

It can be a bit tricky, so there’s no need to rush it!

If you’re having a hard time with this step, you could draw with a light pencil first before going over it in pen.

Step 4 – Now draw in the opposite wing 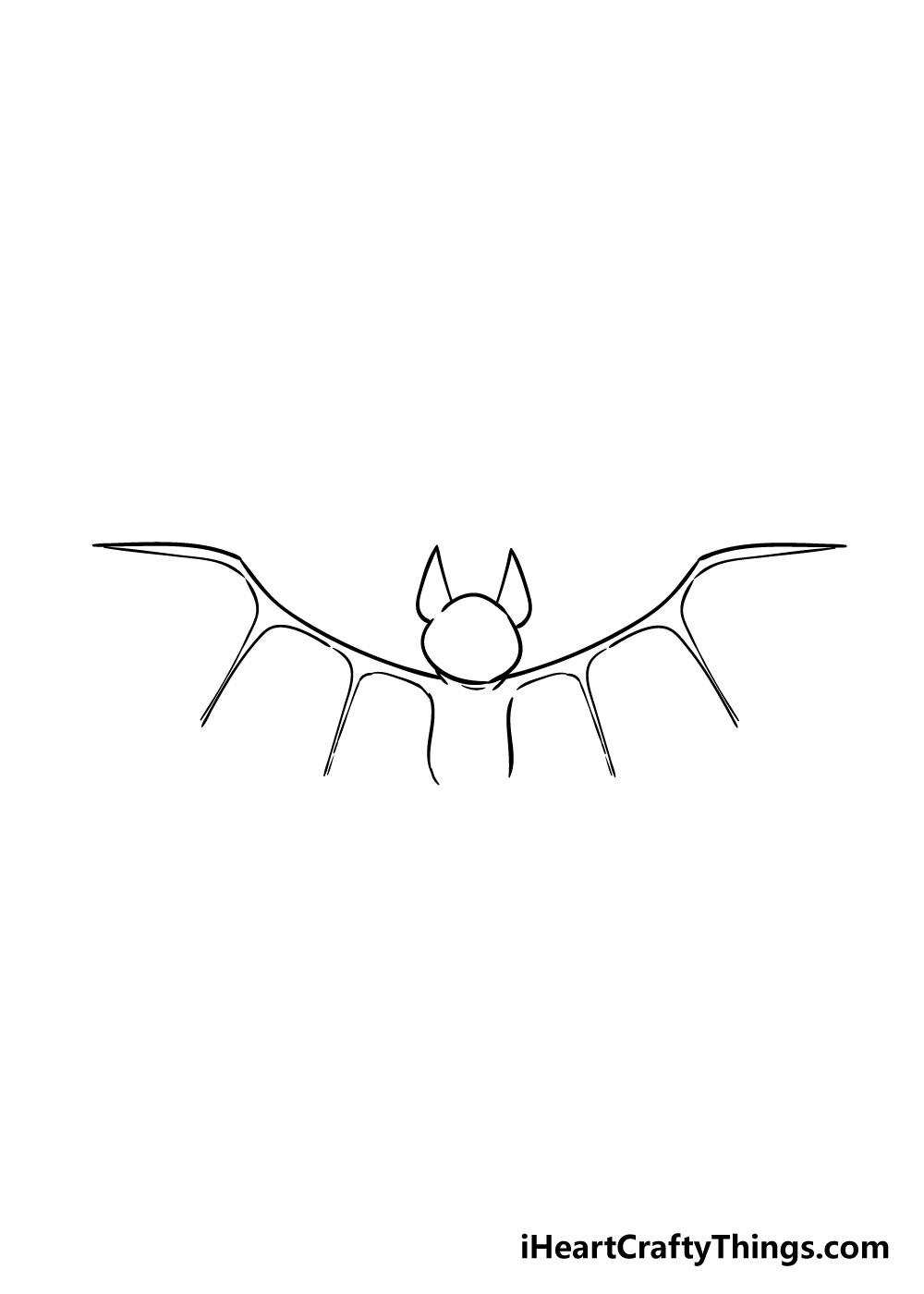 You’ve drawn in the first wing of your bat drawing, so now all you need to do is create a mirror image of the wing on the opposite side.

Simply copy exactly what you did in step 3 but reversed and you’ll have both wing frames in no time! 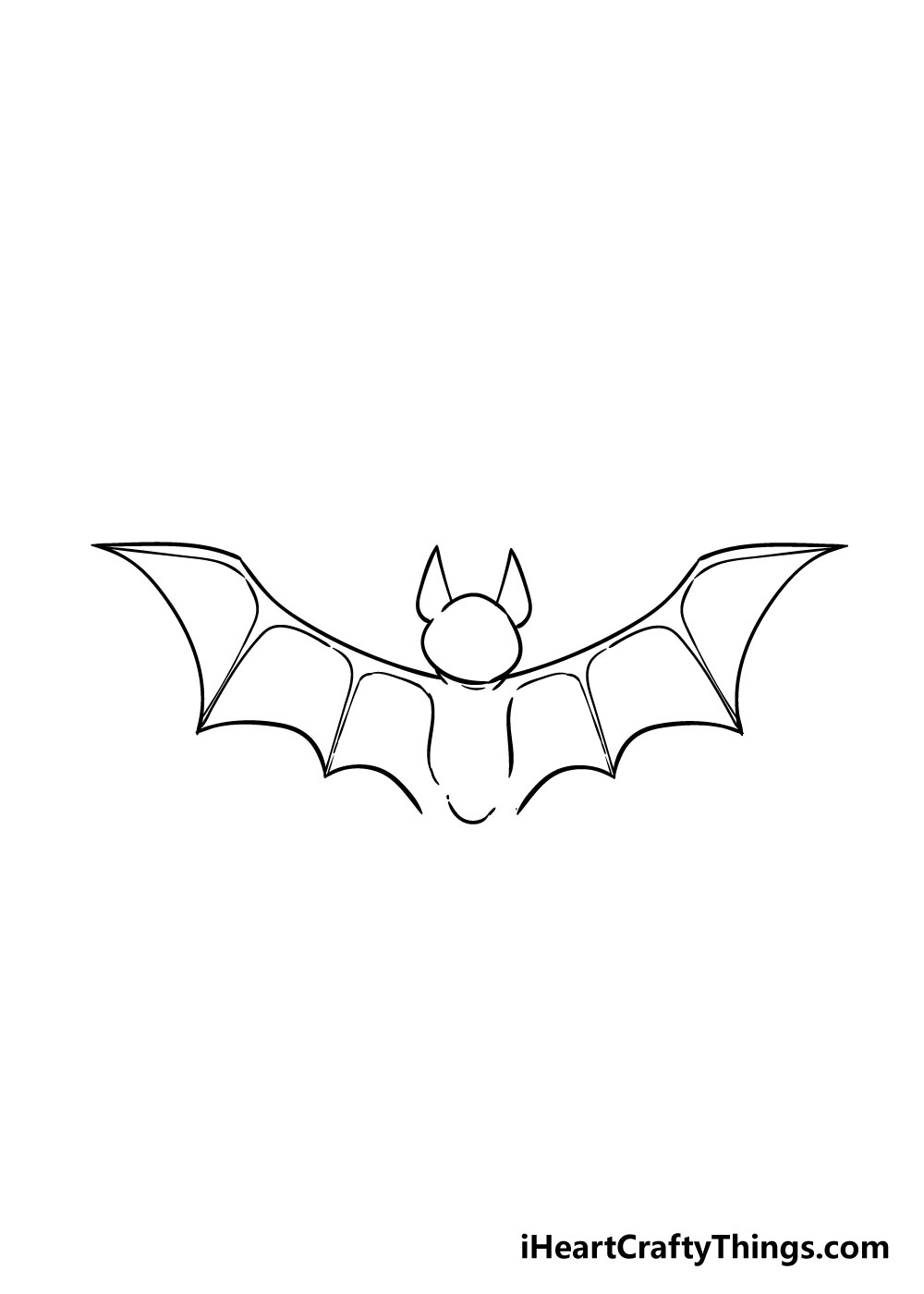 To do this, simply add in some curved lines between the points of the wing frames as you can see in the picture.

Once you have the webbed parts of the wings added, you can add in a small line for the bottom of your bat’s body.

Step 6 – Next you will be adding in some legs 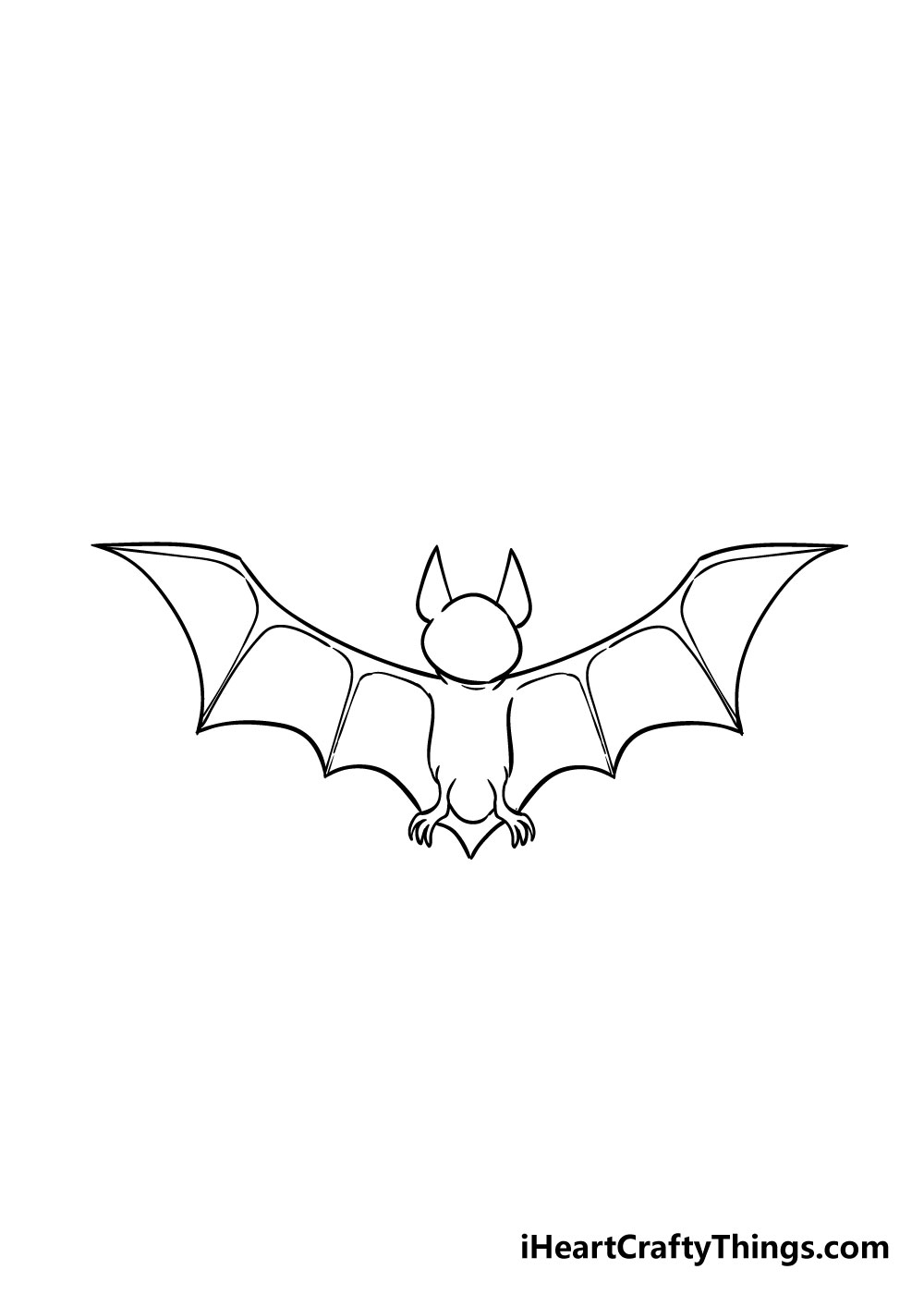 You’ve almost finished your bat drawing at this stage, so for the next few steps we will be adding in the finishing touches and a few final elements.

For the sixth step in this guide on how to draw a bat, we will be adding in the legs of the bat.

Using some curvy lines and points simply draw in the small legs with little sharp claws at the end of them like you can see in the picture.

Once the legs are done, you can draw in a pointy line underneath them to represent the bottom of the wing. 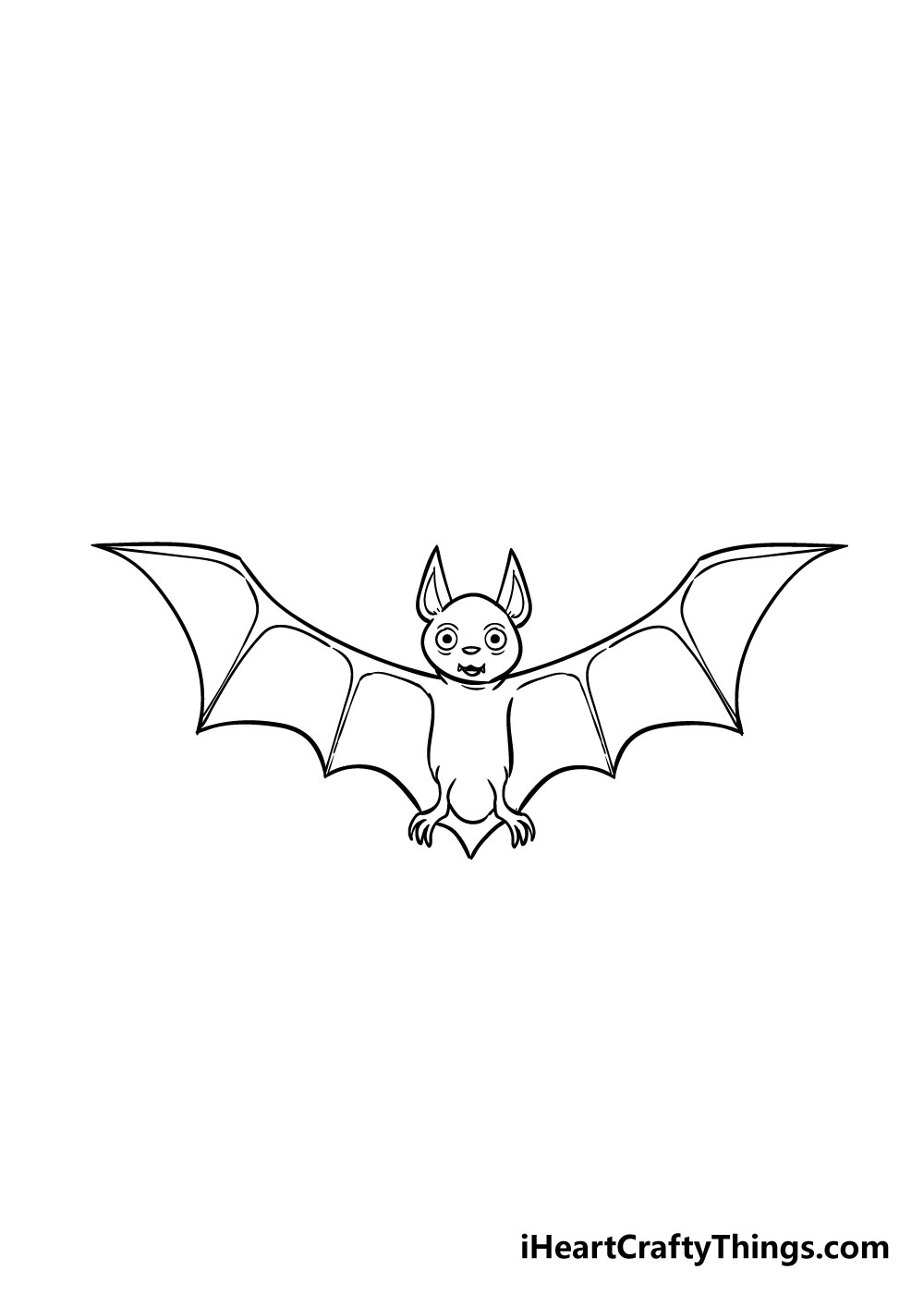 For this next step, we will be adding in a cute face for your bat drawing. Using circles and some smaller lines, you can first add in some eyes for your bat along with a little nose and mouth.

You can closely adhere to the picture and try to draw it that way, but you could also get creative with the look and change the facial expression of your bat drawing.

Once the face is drawn in, you can draw in the inner ear section of your bat’s ears.

Step 8 – Add in the final details 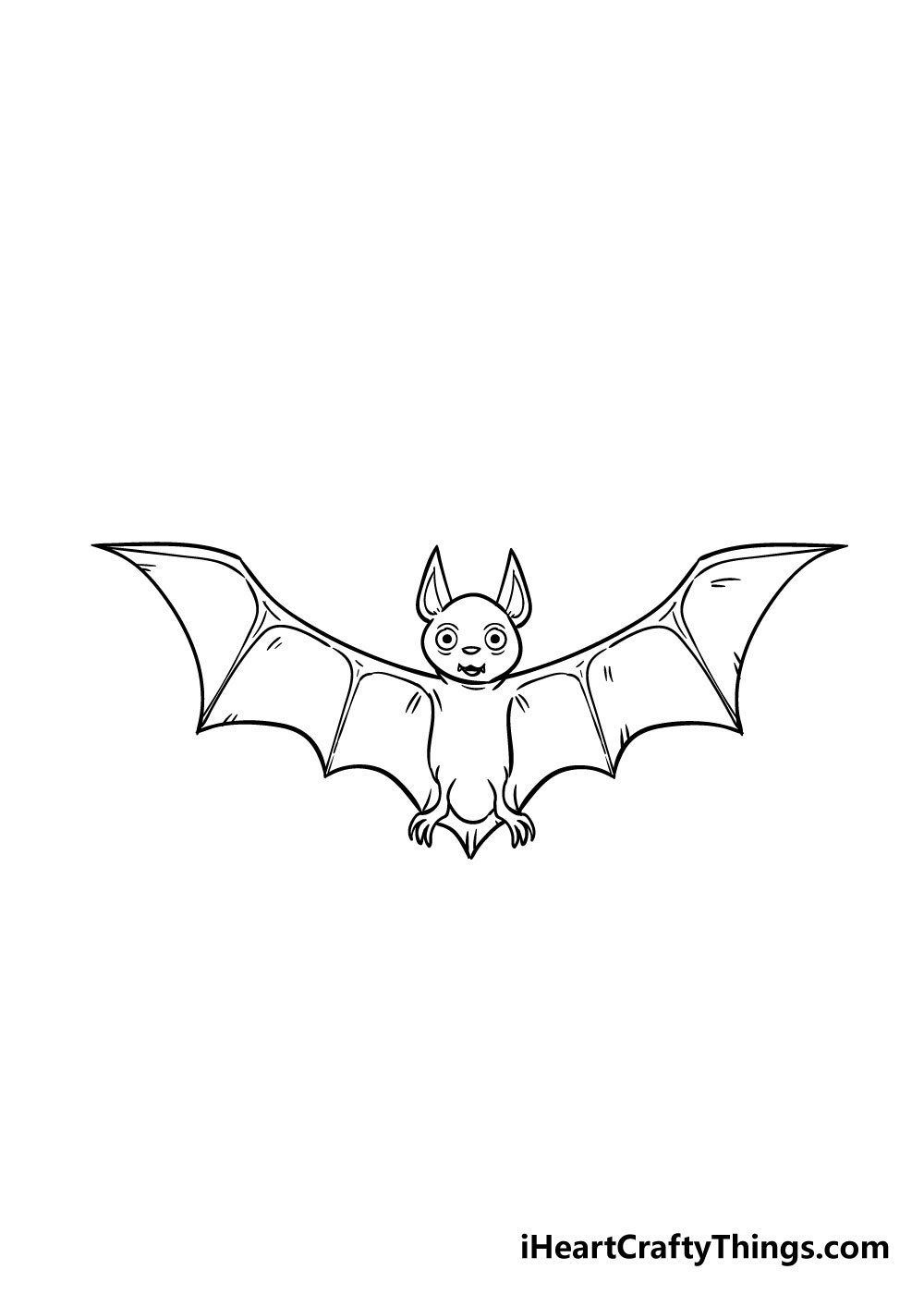 Your bat drawing is almost finished now! All that’s needed now is to add in some small lines to the leathery soft parts of the wings to make it look like the skin is stretched between the frames of the wings.

With that final set of details, we will be finishing off your awesome bat drawing in the next step! 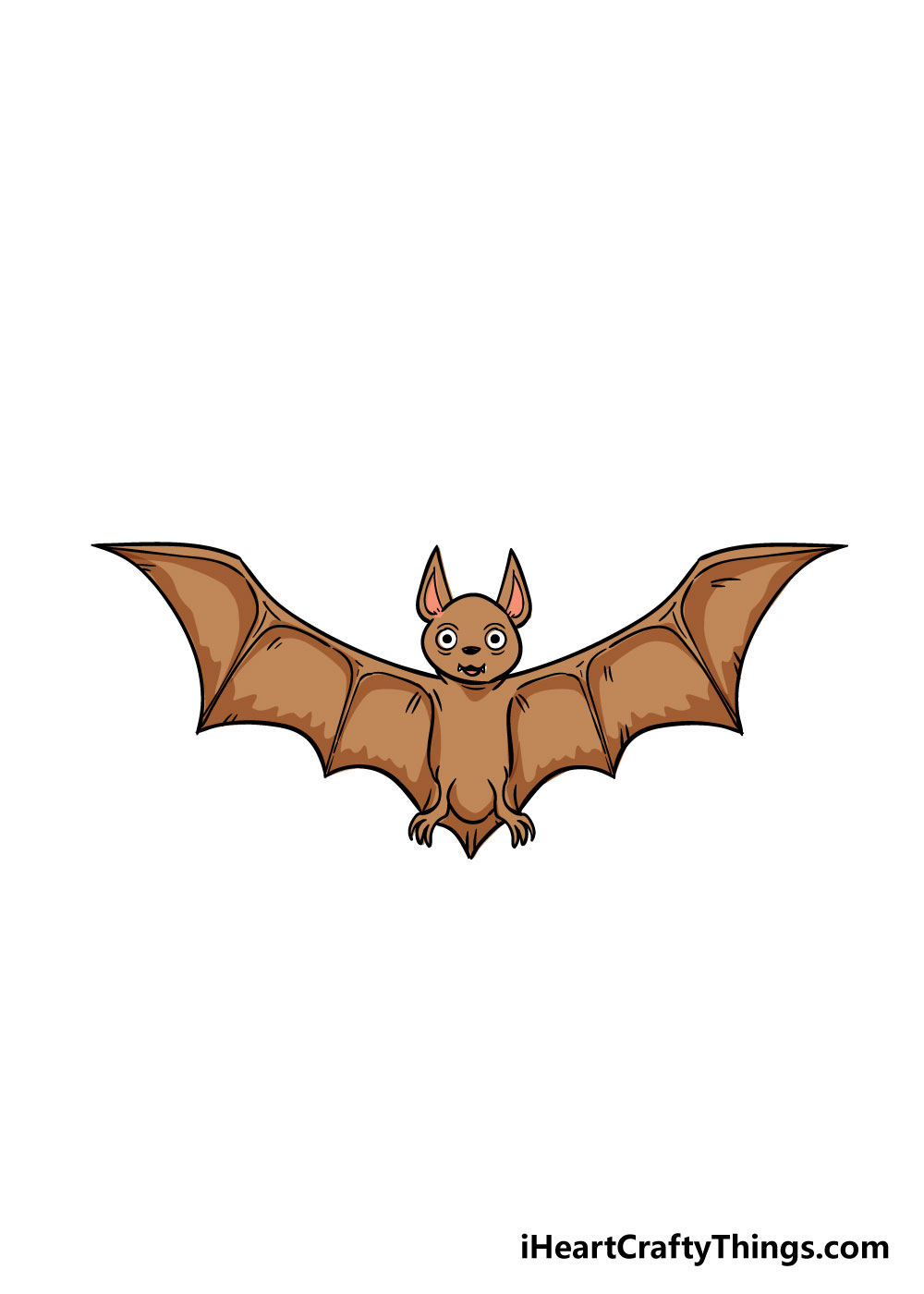 To finish off your amazing bat drawing, all it needs now is some color! This is where you can really show off your artistic skills and let your imagination run wild.

We’ve shown one way you can color it in with our reference picture, but you should let your inspiration take over and use all of your favorite colors!

You can further personalize your drawing by giving it a cool background as well.

Maybe you could color in the background a dark blue with a bright yellow moon to make it look like your bat is flying through the night sky!

You could also have some fun with different art mediums at this stage. Mediums such as watercolors, acrylic paints, colored pens and pencils can be lots of fun to use for some great color variations!

Your Bat Drawing is Complete!

We hope that this simple step-by-step guide on how to draw a bat in 9 easy steps was helpful and fun for you to use!

Drawing a bat may seem like a tricky picture to take on, but by breaking it down into manageable steps, we hope that it was fun and easy for you to learn.

Now that you can draw a beautiful bat, you can add your own touches to your drawings by adding in new backgrounds, colors and art mediums. The only limit is your imagination, so let it run wild!

Once you’ve drawn and colored in your bat drawings, we hope that you will share them to our Facebook and Pinterest pages for us to see! 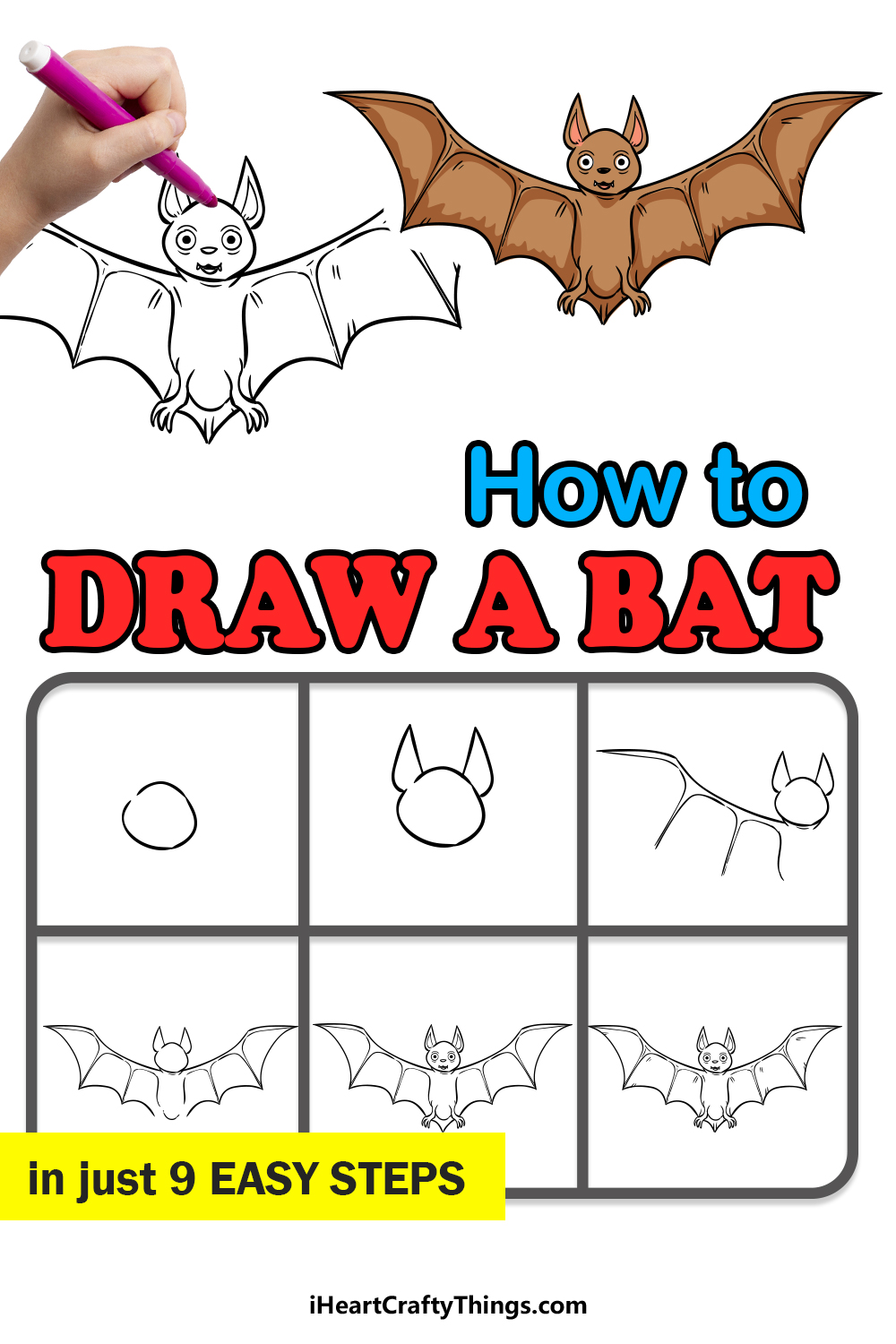 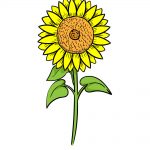 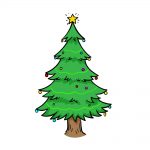