Setting a foot in outer space has long been the aspiration of many people of all ages.

We have always been fascinated with the idea of floating around the galaxy and we idolize the brave astronauts who have traveled outside the Earth.

The interest about astronauts and the nature of their work has created a huge demand for a free astronaut drawing tutorial. 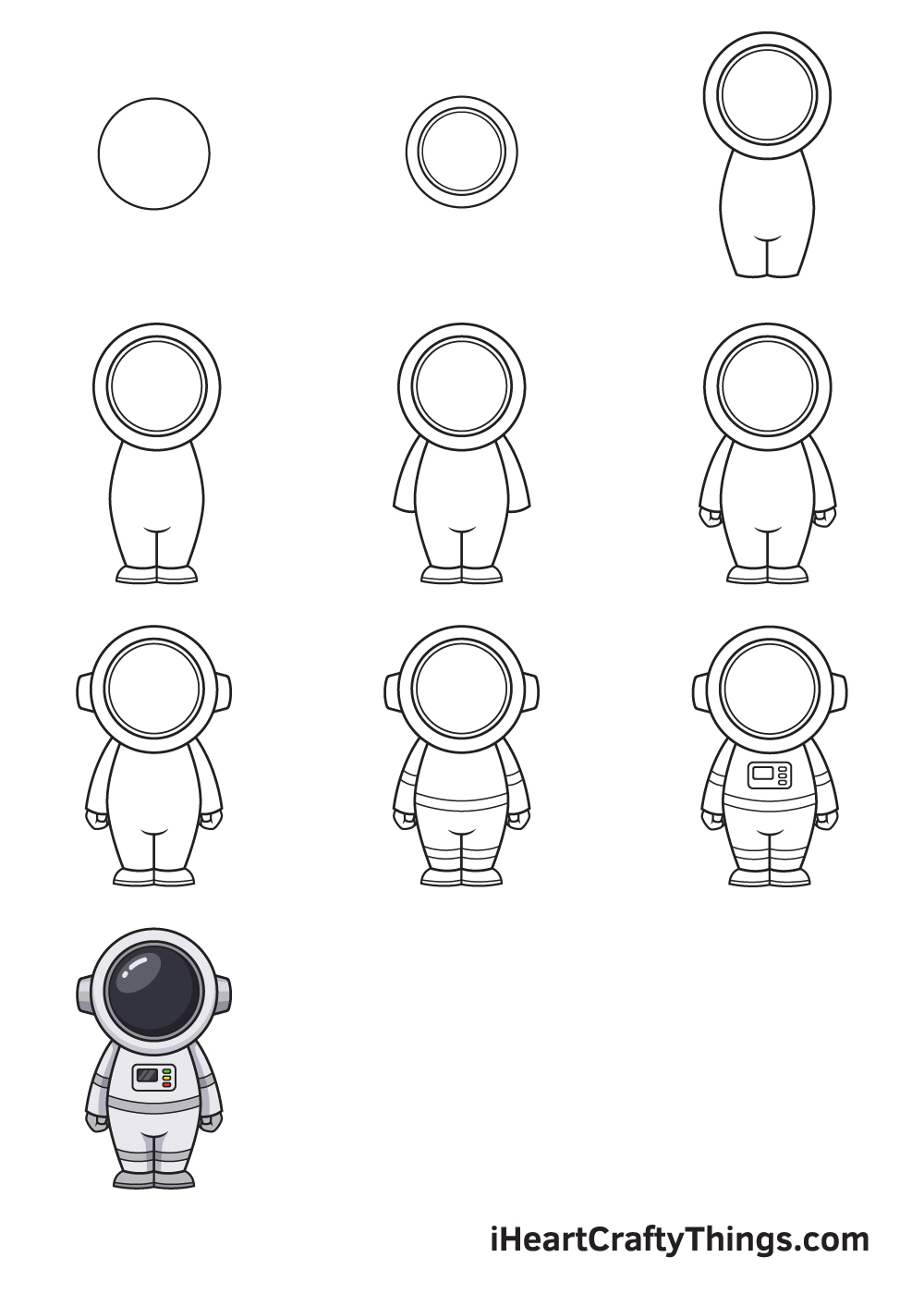 So, here we are! Finally, we present to you—a step-by-step tutorial on how to draw an astronaut. This tutorial makes the entire process a lot easier, thanks to its brief, yet elaborate, instructions and visual illustrations.

So, what are you waiting for? Go ahead and grab a piece of paper along with your favorite pencil so we can draw together!

How to Draw an Astronaut — Let’s get started!

Starting on the middle upper portion of your paper, draw a perfect circle to outline the astronaut’s head.

If you’re having trouble freehanding a perfect circle, don’t worry! Feel free to use a compass, which is a drawing tool that helps you draw flawless circle shapes effortlessly.

To make sure that the astronaut will be drawn in the center, you can create reference lines by drawing an intersecting horizontal and vertical line across your paper.

The vertical line above the horizontal line marks the spot where you should draw the circle.

Step 2 — Create an Outline of the Astronaut’s Head

Draw another two parallel circles within the first circle shape we drew previously, as shown in the illustration.

Keep in mind that the outer circle should have a relatively thicker line than the one on the inside.

At this point, the astronaut’s helmet should now be coming together.

Step 3 — Next, Outline the Body of the Astronaut

To structure the astronaut’s body, draw two curved lines facing each other underneath its head connected by a horizontal line at the bottom.

Don’t forget to draw a short vertical line on the bottom middle of the body’s outline to create a division between the two legs of the astronaut.

Afterwards, draw a short upward curved line at the top end point of the vertical line we drew just now to create a pleat on the clothing, making it appear more realistic.

After completing this step, the astronaut’s pair of legs should now be fully structured.

Step 4 — Then, Draw the Astronaut’s Pair of Feet

Then, draw a horizontal line connected to the curved line we recently drew to create the shoes.

Make sure to add a horizontal line above the bottom of each shoe to create the soles.

Draw curved vertical sleeves with horizontal hems on each side of the astronaut’s body.

Remember, the sleeves of an astronaut’s suit are long, as seen in the illustration.

Step 6 — Next, Draw the Astronaut’s Pair of Hands

Draw a hand underneath the hem of each sleeve that we drew in the previous step. To create the hand, simply draw an uneven circular shape forming a fist.

Don’t forget to add an angled line right in the middle for the thumb, creating a more realistic-looking pair of hands.

Complete the entire body of the astronaut by creating a pair of ears directly attached to its helmet.

The connect the end points of the two lines with a slightly curved vertical line.

As shown in the illustration above, the shape of the ears should look quite similar to an upright wide truncated cone.

Draw two parallel horizontal lines on each sleeve, in the middle of the torso, and at the bottom of each leg.

This creates the distinct patterns the astronaut’s suit typically has.

Finalize your drawing by adding a little more detail on the suit that the astronaut is wearing.

The only thing it’s missing is the display and control device on the chest area of the suit, and that’s exactly what we will be drawing in this step.

Lastly, draw three smaller rectangular shapes on the right side within the device. See, it’s as simple as that!

And there you have it—you have successfully drawn an astronaut! Now, we will be moving forward to the most exciting part, which is choosing the colors and coloring your drawing.

Throughout the years, the color of an astronaut’s suit continuously changed. It started out as yellow, then turned to white, and later became orange.

The most recently developed astronaut suit is, once again, white in color.

You can opt to follow the standard colors of the astronaut’s suit or use a unique set of colors.

We recommend doing the letter so you can personalize your drawing and make the most out of your experience. After all, it’s your work of art so it’s all up to you!

Your Astronaut Drawing is Complete!

If you’re one of the many people who have dreamt of becoming an astronaut, then we’re sure you’ve had a lot of fun with this step-by-step astronaut drawing tutorial.

We’re uploading brand-new drawing tutorials regularly to update our catalog, so make sure you keep checking back so you can continuously learn how to draw something new.

What would you like to learn how to draw next? Let us know and we’ll do our best to fulfill your wishes.

As soon as you finish your masterpiece, don’t forget to show off your work of art by sharing it on our Facebook page and on Pinterest. Don’t be shy—we’re sure it looks incredible!

We can’t wait to see your incredible astronaut drawing! 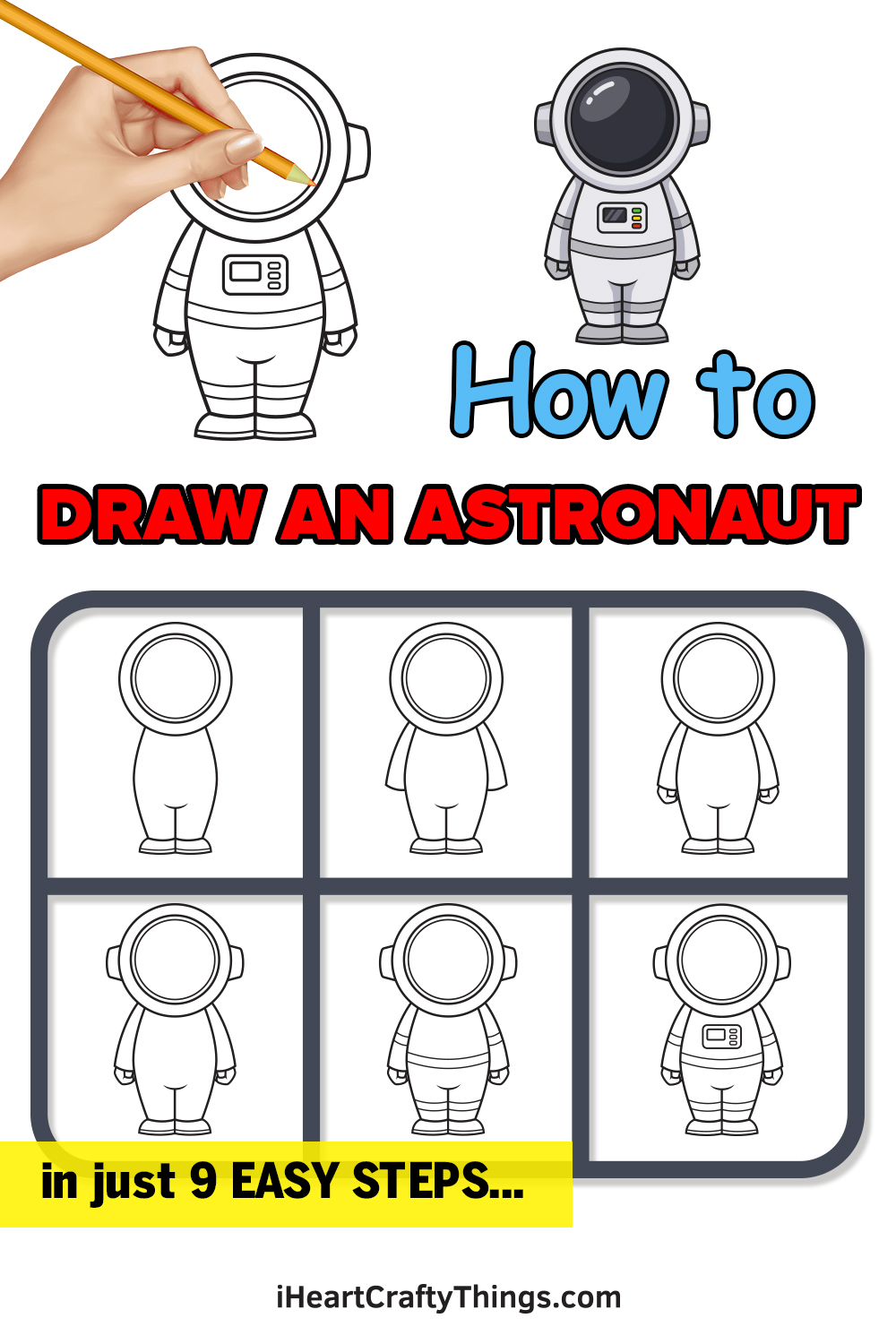