Dinosaurs have fascinated us for many years.

From studying fossils, we can get a basic idea of what they may have been like, but we will never know quite what it would have been like to share the earth with them.

Many people love dinosaurs in spite of this mystery, and media such as the Jurassic Park films helped to bring lesser-known ones into the mainstream.

This is certainly true of the velociraptor who were brought to terrifying life in the films. Learning how to draw a velociraptor is a great way to show off what you feel these dinosaurs looked like!

If you love velociraptors, this will be a guide that is not to be missed!

We hope you enjoy this creative trip back in time as we begin this step-by-step guide on how to draw a velociraptor. 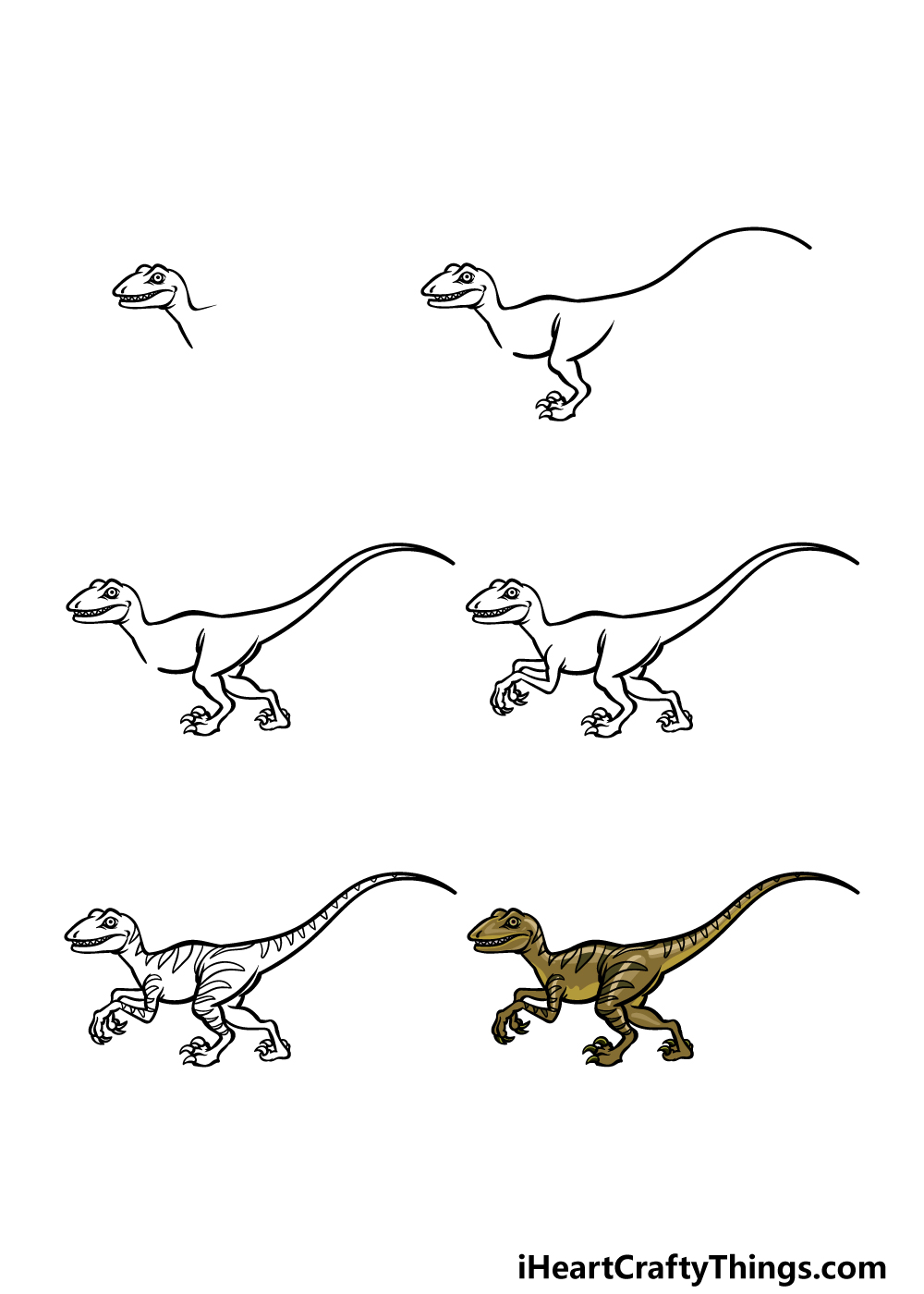 How to Draw A Velociraptor – Let’s Get Started! 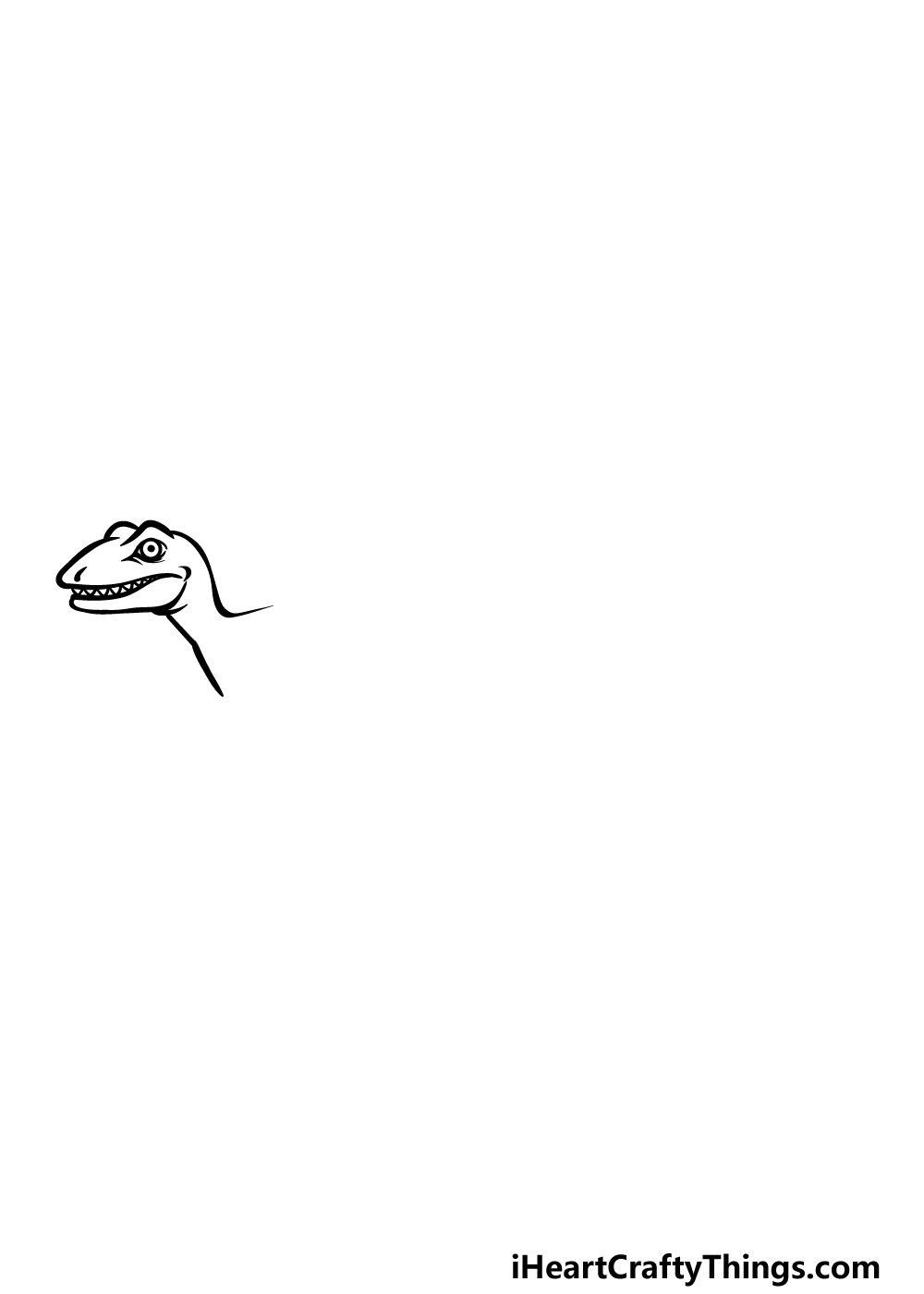 We shall begin this guide on how to draw a velociraptor by starting with the head.  First, you can draw a small circle and add a dot to it for the eye of the velociraptor.

This will then be surrounded by some line details to finish off the expression. Then, draw some curved lines over the eyes, and then you can draw the outline of the head and the face.

Velociraptors have fairly small heads with long mouths filled with sharp teeth. Once you have drawn these aspects of the head, we can start drawing more of the dinosaur as we move to the next steps.

Step 2 – Now, draw the tail and the first leg of this velociraptor 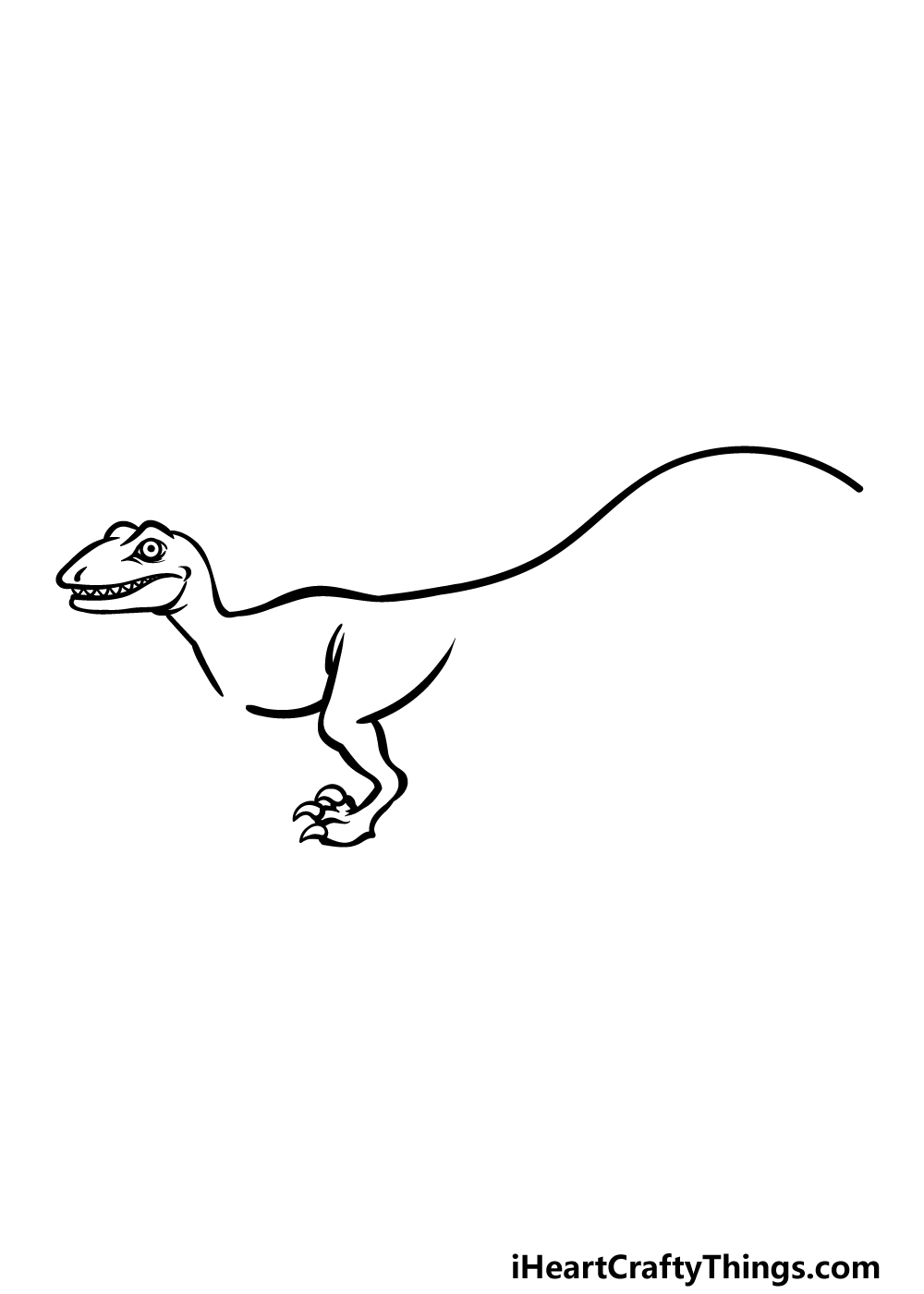 To continue this velociraptor drawing, we will now be drawing the back and top of the tail for this dinosaur. The back will extend from the base of the neck, and it will be drawn using a wavy line.

This wavy line will go backward and raise up a bit to become the top of the tail. We will be finishing the rest of the tail outline very soon as well.

Then, we will be drawing the leg of the velociraptor. This will go on the side of the body, and you can use some curved lines for the thick hip of the leg.

The rest of the leg will be quite thin and angular, and it will end in some fearsome claws.

Step 3 – Draw the other leg and finish off the tail 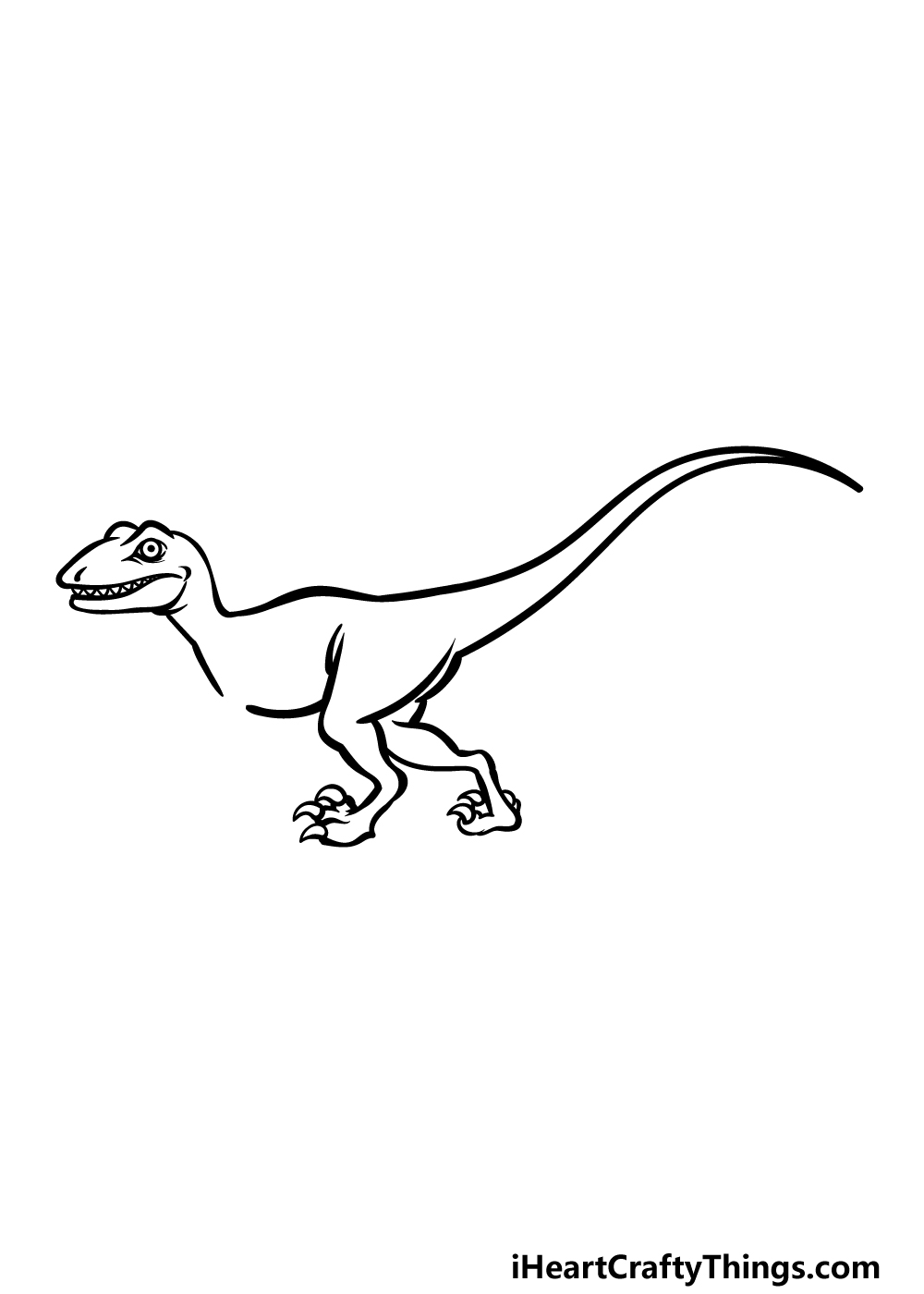 You’ve drawn one leg so far in this guide on how to draw a velociraptor, and in this one we shall draw the other.

This second leg will look rather similar to the first one, but due to the angle it will look a bit smaller. In this step, we will also be adding the rest of the tail outline.

This will be done with a similarly wavy line that runs parallel to the top outline to meet at a pointy tip.

With these drawn, we will then add the final outlines in the next step!

Step 4 – Next, draw the arms of the velociraptor 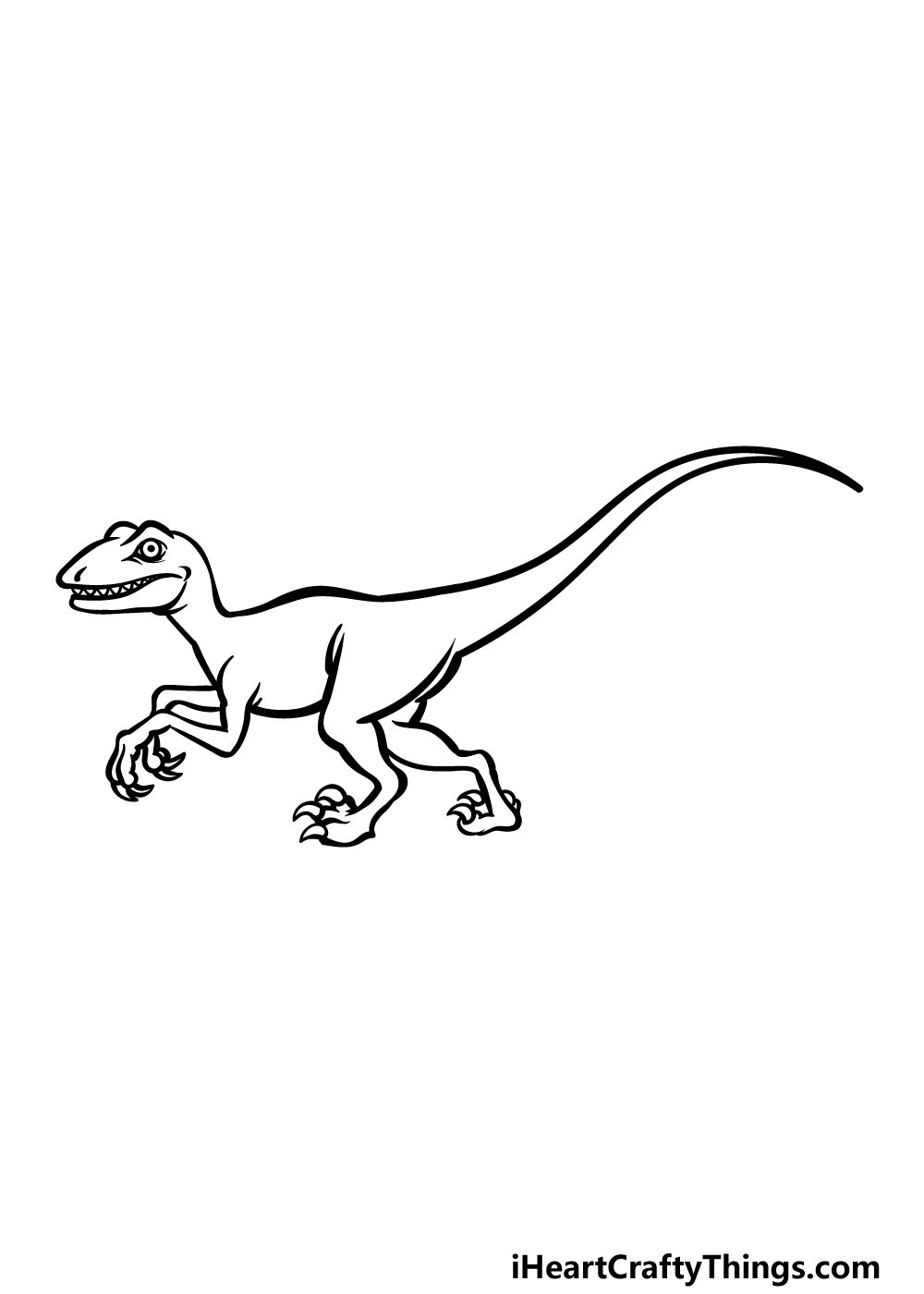 To finish off the outline of this velociraptor drawing, we will be adding some arms in this step.

The arms of this dinosaur were quite long and thin, and they ended in some sharp claws that were no doubt rather deadly to anything on the receiving end.

The arms will be drawn using some rounded lines, and then the hands will curve over rather sharply to end in those claws we mentioned.

Now that you have completed the outline of this drawing, we can move on to some final details in the next step of the guide.

Step 5 – Add the final details to your velociraptor drawing 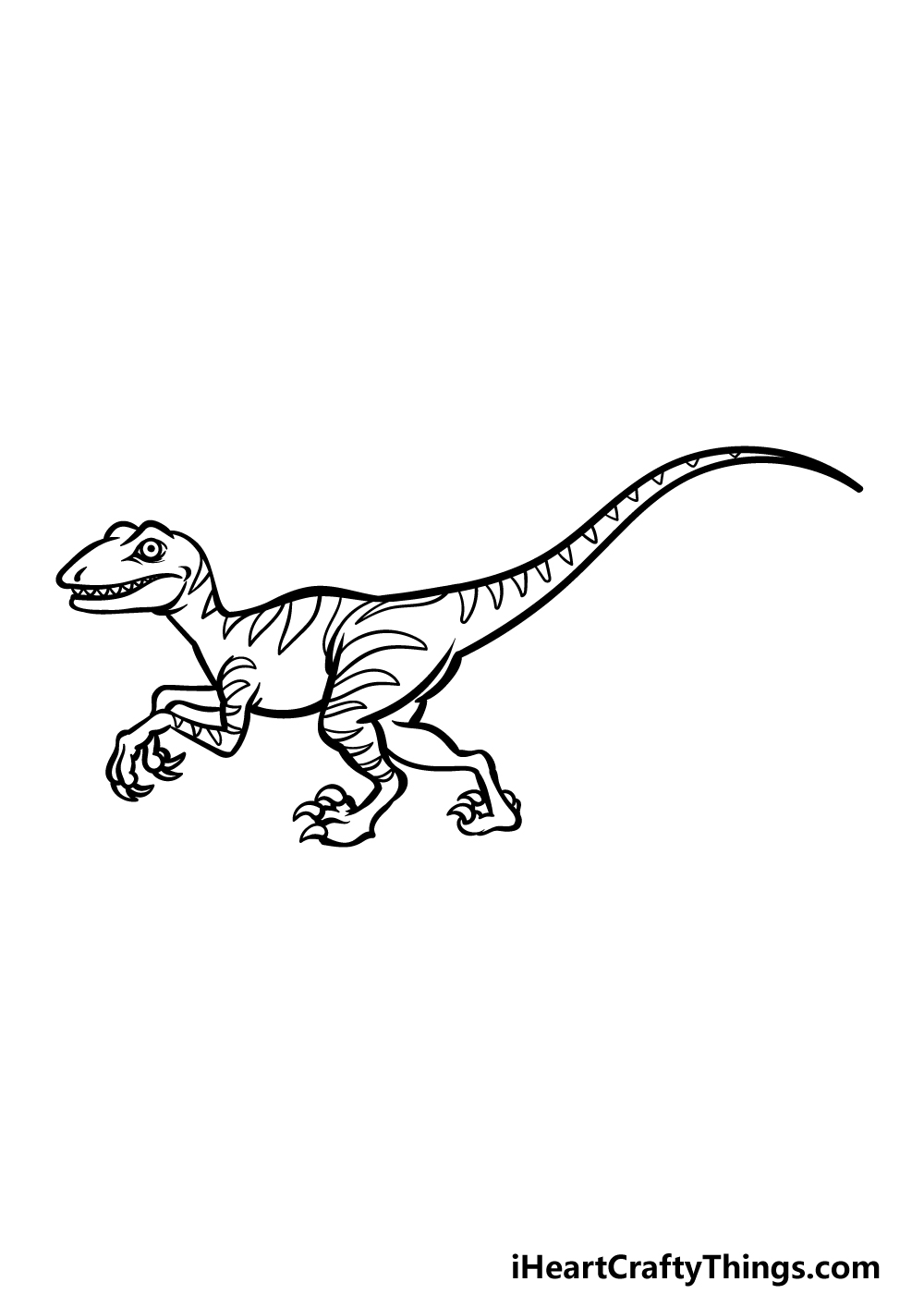 You have finished the outline of this image, and in this step of this guide on how to draw a velociraptor, you can focus on adding some final details.

It’s heavily debated as to what dinosaurs may have actually looked like, and theories range from them being covered in feathers to them being more lizard-like.

We went with the classic lizard-like option for this drawing, and to finish it off we added some sharp, rounded stripes onto the body.

Will you use similar markings for your own velociraptor?

You could also go for other markings, draw a background or even represent another theory for how this dino would look. What details will you use to finish it off?

Step 6 – Finish off your velociraptor drawing with color 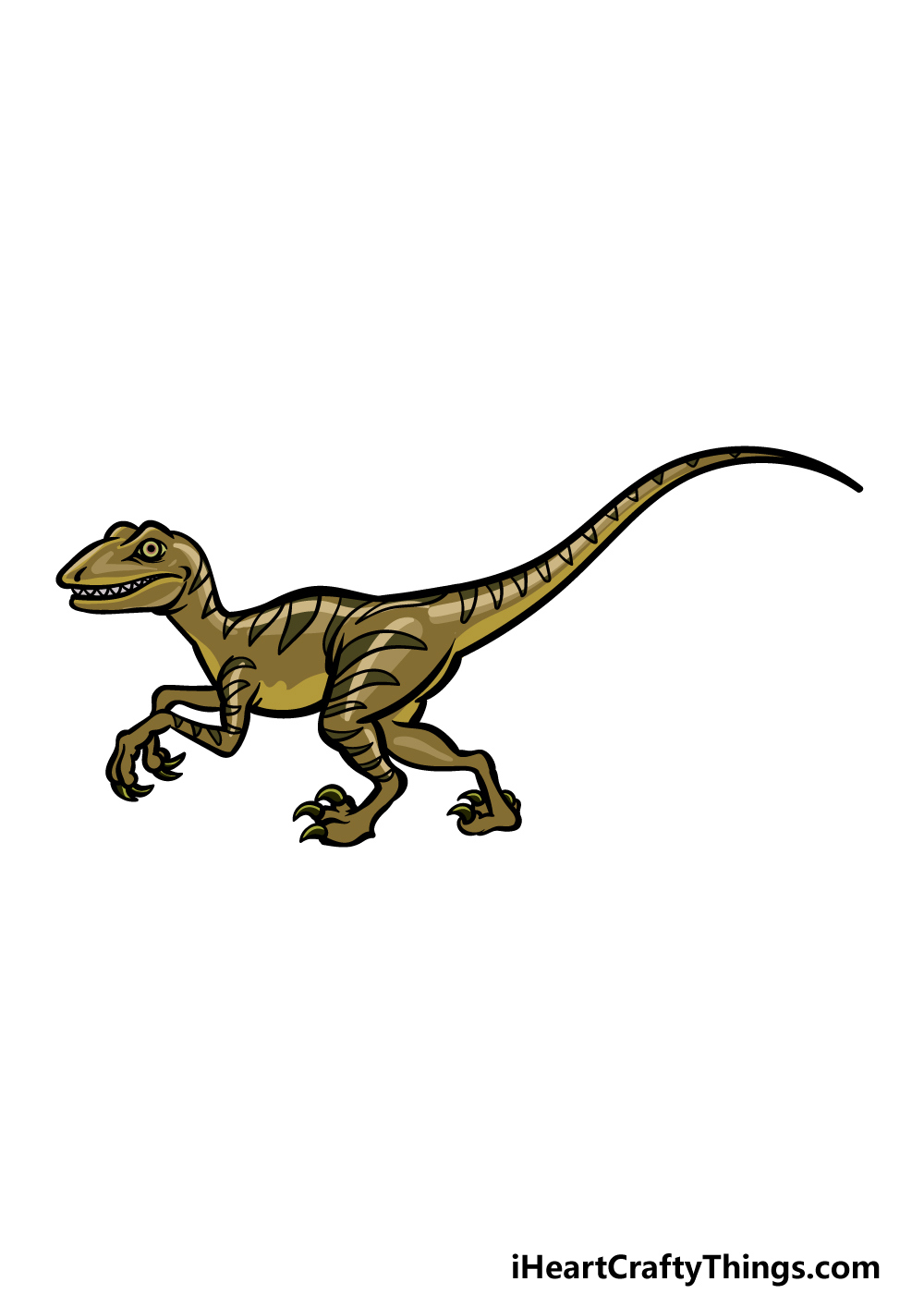 We may not know for sure what colors the velociraptor would have displayed, if any, but it’s still fun to imagine what they may have looked like!

In our reference image, we showed you what our interpretation of the colors would be.

We used some lighter greens for most of the body, and then used some darker shades for the stripes themselves.

These are just the colors that we chose, and while you could go for them as well you could also show off what your ideas would be with your own velociraptor drawing!

As we mentioned, we have no idea what colors velociraptors may have had, so that means that you can really let your color creativity run wild as you add some color.

What colors and art mediums will you choose to finish it off?

Create some prehistoric magic with these tips for your velociraptor sketch!

While no one outside of a movie has seen a live velociraptor, scientists believe they were pack animals. For that reason, you may want to add some more to this drawing of a velociraptor!

How big this pack is would depend on you, but once you have an idea you can go through the guide again and add as many as you like.

By changing the poses and small details, each one can be unique to create a vibrant pack!

Adding more velociraptors is just one way to populate this drawing. If you have other dinosaurs that you love, you could also add them to the scene!

There are so many incredible dinos to choose from, and there are no wrong answers. This velociraptor could be hanging out with a giant diplodocus or maybe a stegosaurus.

If you’re having a hard time thinking of dinosaur ideas, you could look online or in a dinosaur book for some inspiration!

Next, you could add a background to this velociraptor drawing to make it even more complete. You could base this background on what scientists believed prehistoric environments to be like, but you can also get a bit more creative with it.

There are many different environmental effects and landscapes you could depict, and the only limit is your imagination! Where do you think this velociraptor could be in this artwork you have created?

We have looked at a few ways to make this velociraptor sketch more realistic, but for this final tip we think it could be fun to get a bit silly with it!

For example, you could make this drawing a bit more absurd by giving the velociraptor a top hat and a mustache. Or, it could be in a place you wouldn’t expect like a mall or a restaurant.

These are just a few ideas for how you can think outside the box for this image. What other fun ideas do you have?

Your Velociraptor Drawing is Complete!

It’s believed that the velociraptor would have been a fearsome dinosaur that would be quite a deadly threat to face.

Despite this reputation, we hope that this guide on how to draw a velociraptor was not scary to take on!

Even though this is a rather detailed drawing, we aimed to make it much easier for you to take on by breaking it down into smaller steps.

Now that you have finished this drawing, you can show off your creativity by adding your very own details and elements to really finish it off!

Will you draw a background, add some details or maybe even add more dinosaurs?

It would be great to see your finished velociraptor drawing as well, so please be sure to share it on our Facebook and Pinterest pages for us to see when it’s done! 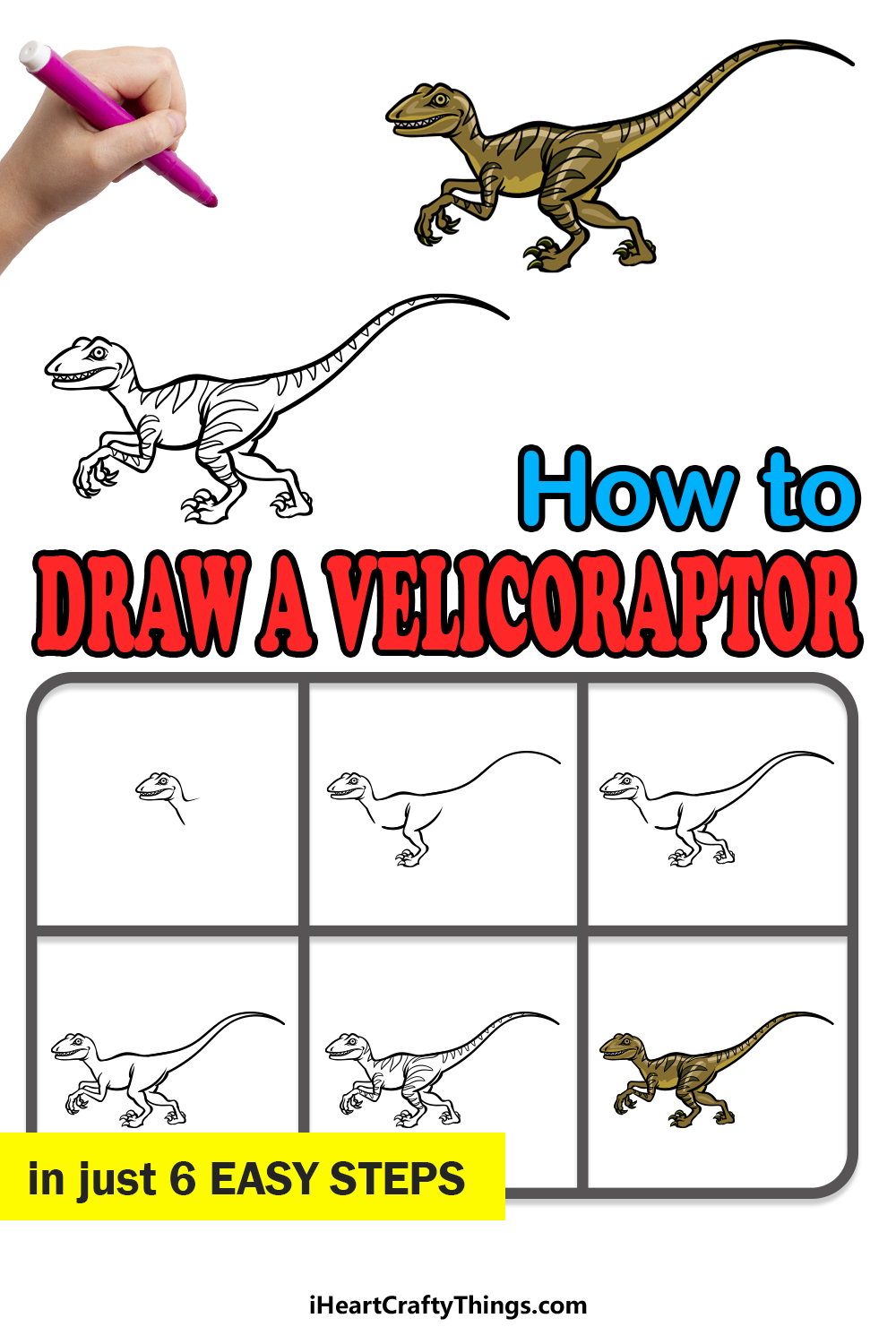 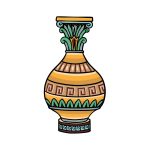 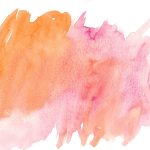