Even though they existed millions of years ago, dinosaurs have captured our imaginations ever since we first discovered their bones and fossils.

Countless films, shows, video games and comics have tried to explore what it would have been like sharing the planet with these titans.

Of all the dinosaurs, perhaps the most recognizable is the mighty predator: the T-Rex.

Due to its popularity, many would like to learn how to draw a T-Rex so that they can show their appreciation and awe for the king of the dinosaurs.

This step-by-step guide on how to draw a T-Rex in 9 steps will have you drawing this mighty dinosaur yourself! 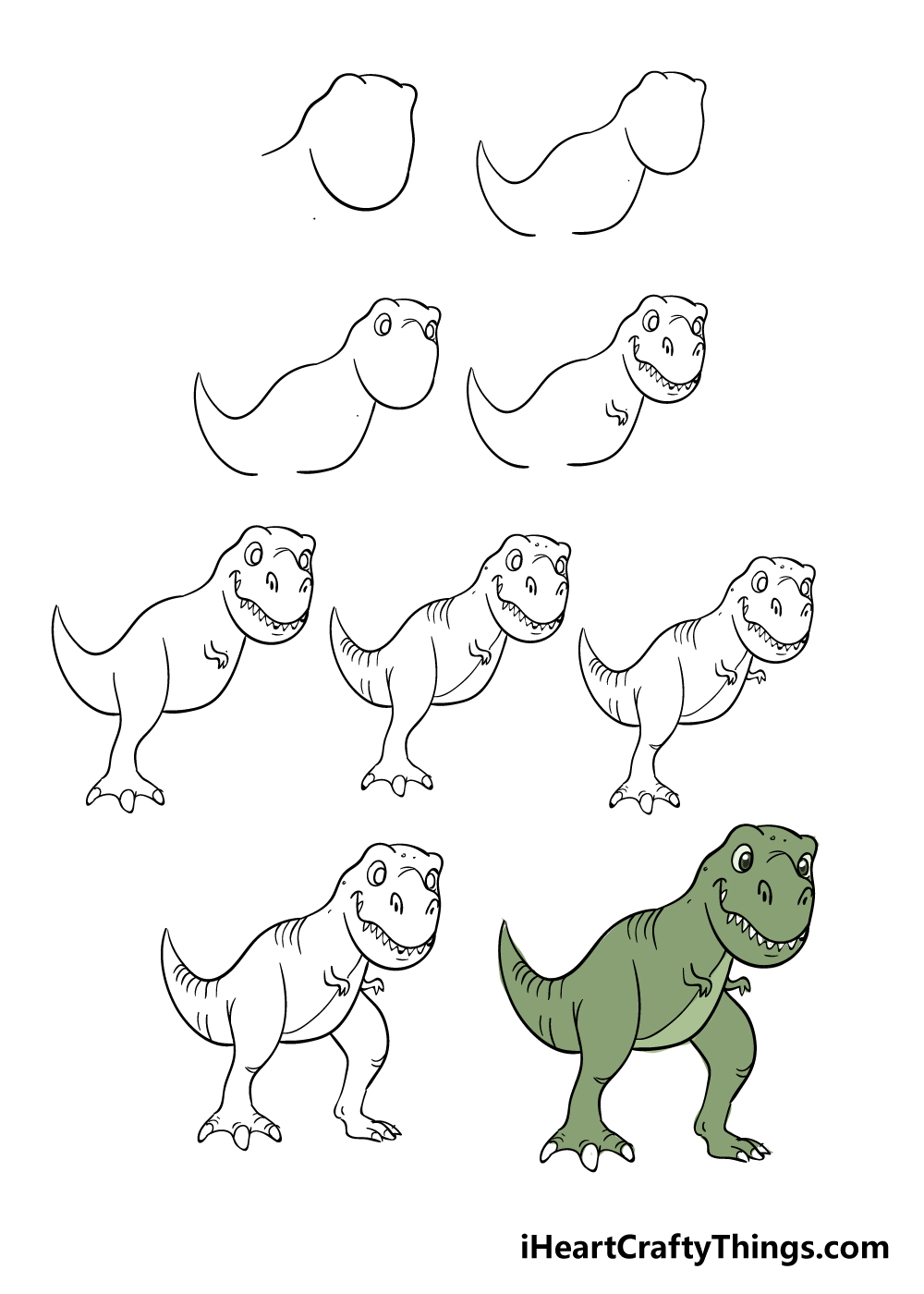 How to Draw A T-Rex – Let’s Get Started! 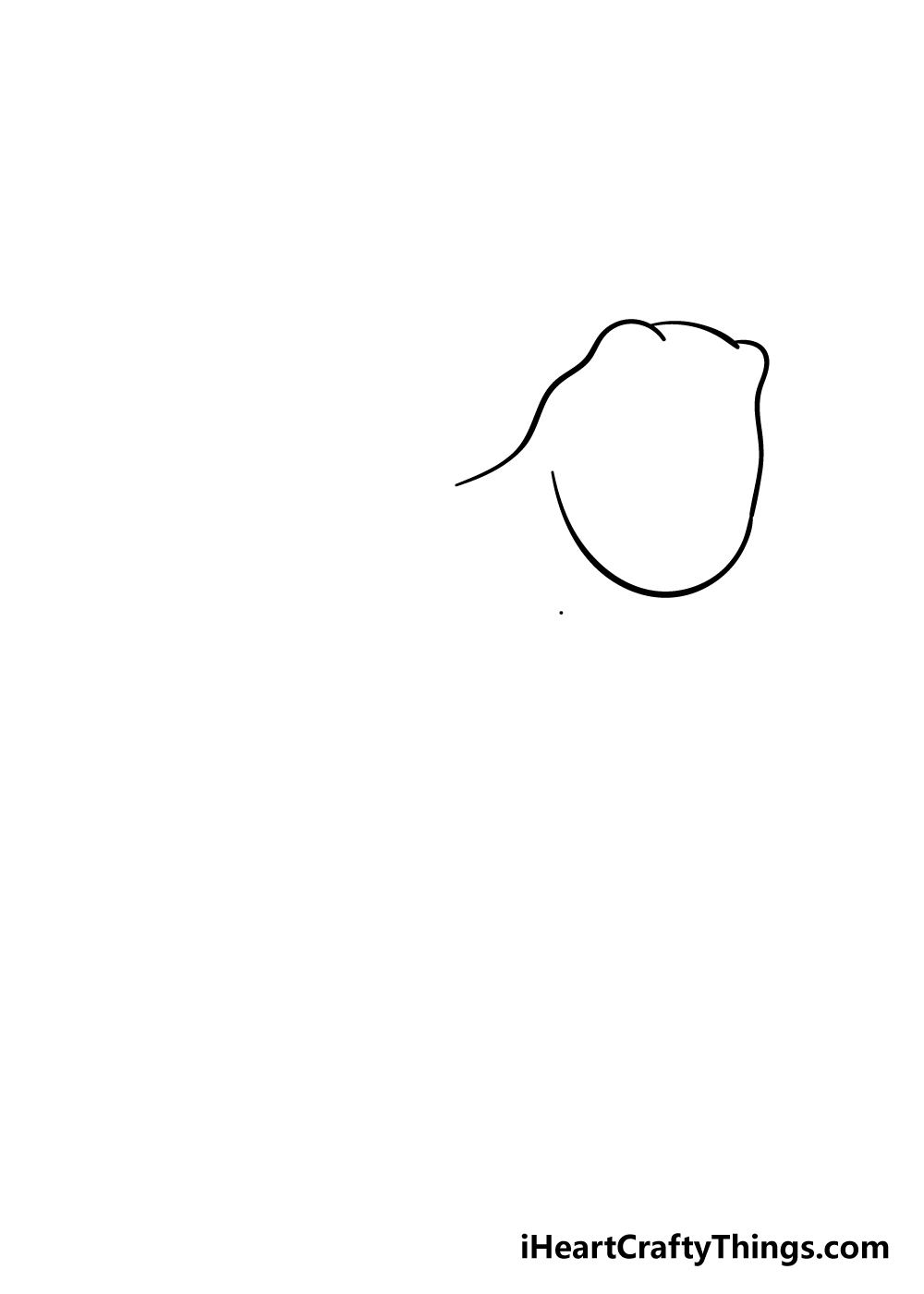 We will be taking it from the top for this guide on how to draw a T-Rex. This is quite literal, as we will be starting from the head of the T-Rex!

Using the reference image as a guide, you can use some curved lines to create the head outline of the T-Rex. There will be two rounded points on top of the head, while the bottom will be quite large and rounded. 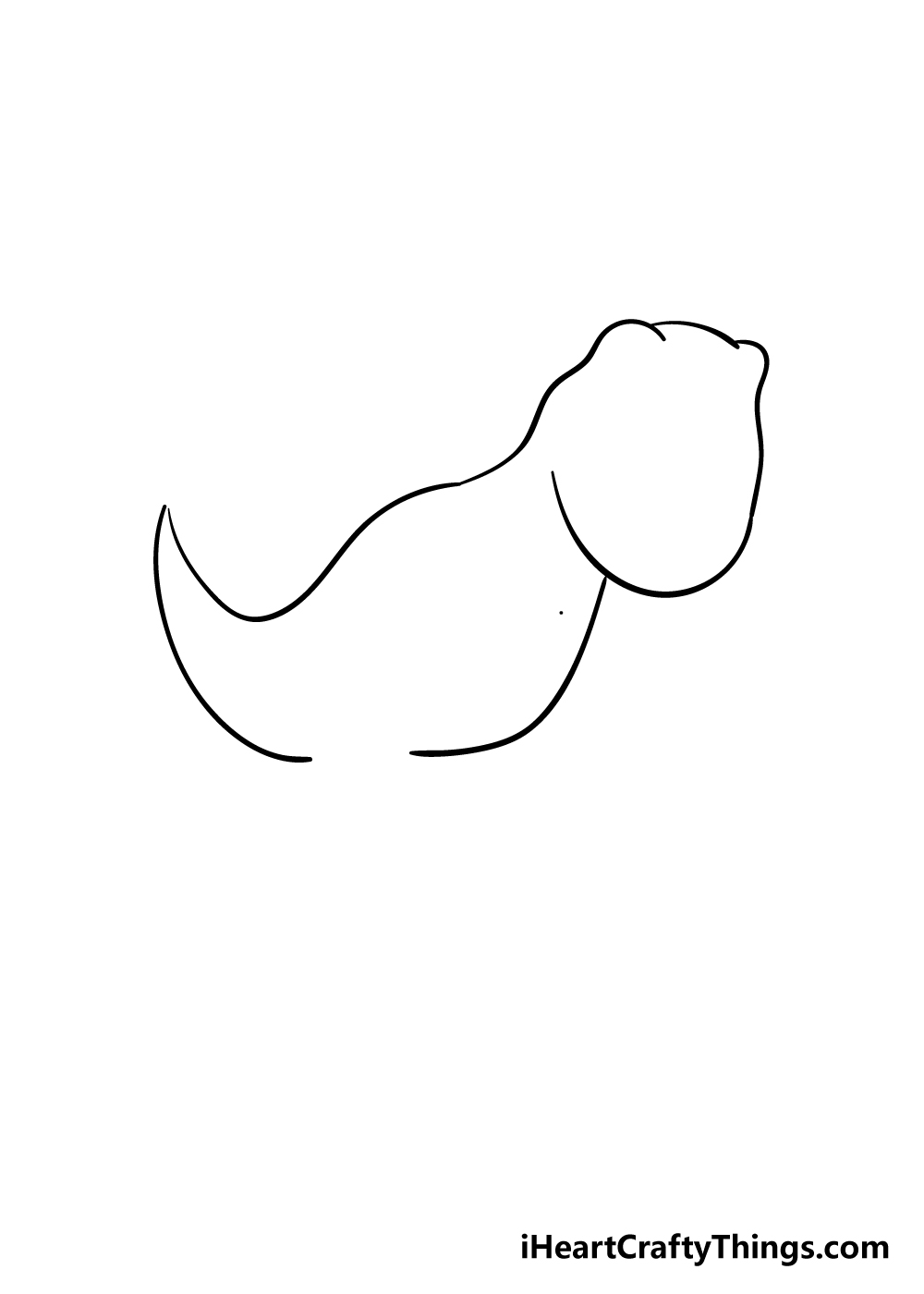 For the next part of your T-Rex drawing, you can build down from the head of the T-Rex to start creating the body.

There should be a space at the bottom where we shall be adding the legs later.

Step 3 – Now, start drawing the eyes of your T-Rex 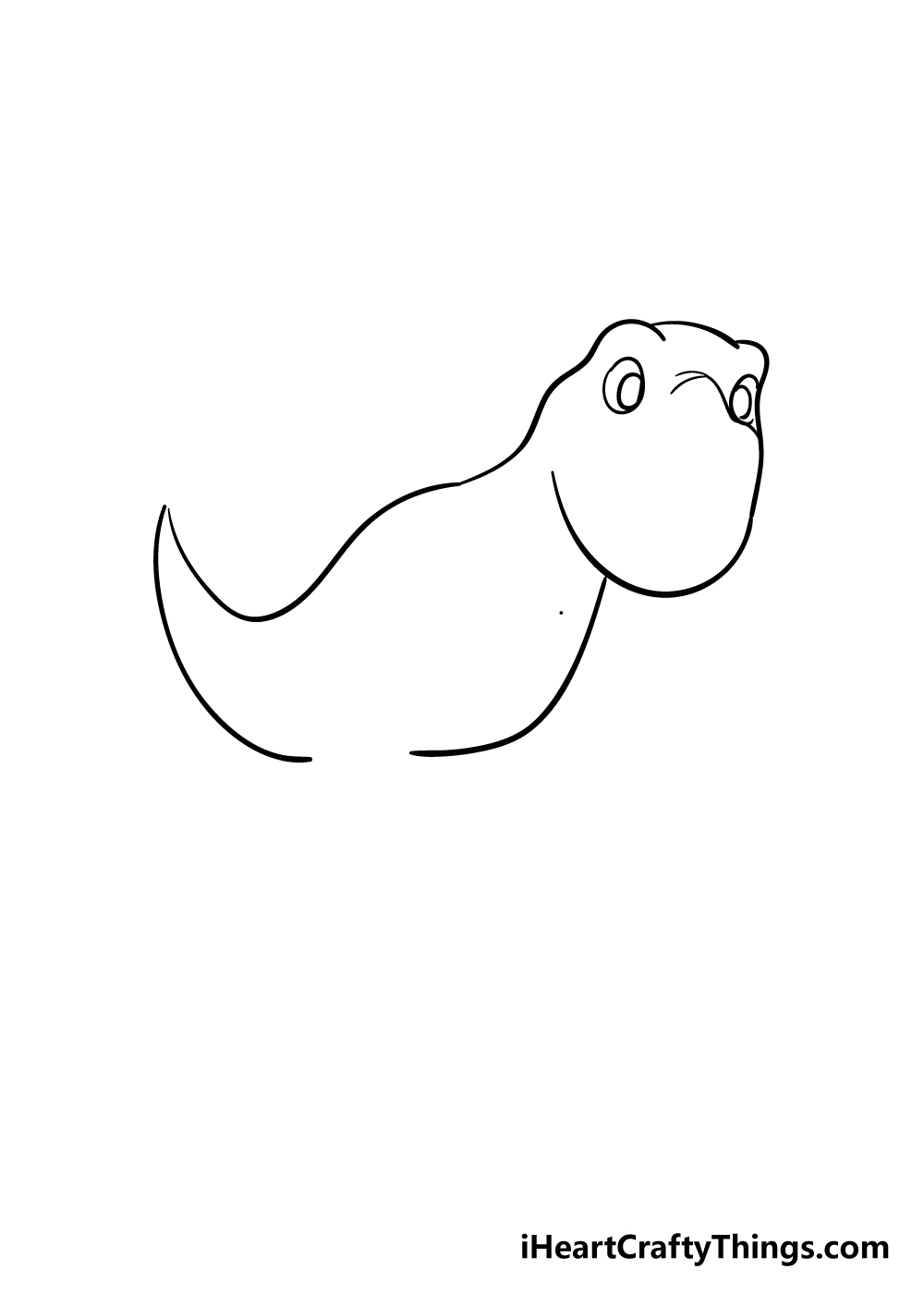 We shall be moving inward into your drawing for this step of our guide on how to draw a T-Rex.

The eyes will be drawn with an oval shape within another oval shape as you can see in the reference image.

Then, be sure to draw a curved line next to the eye on the right. Then, you’re ready for the next step!

Step 4 – Next, draw the face and first arm of your T-Rex 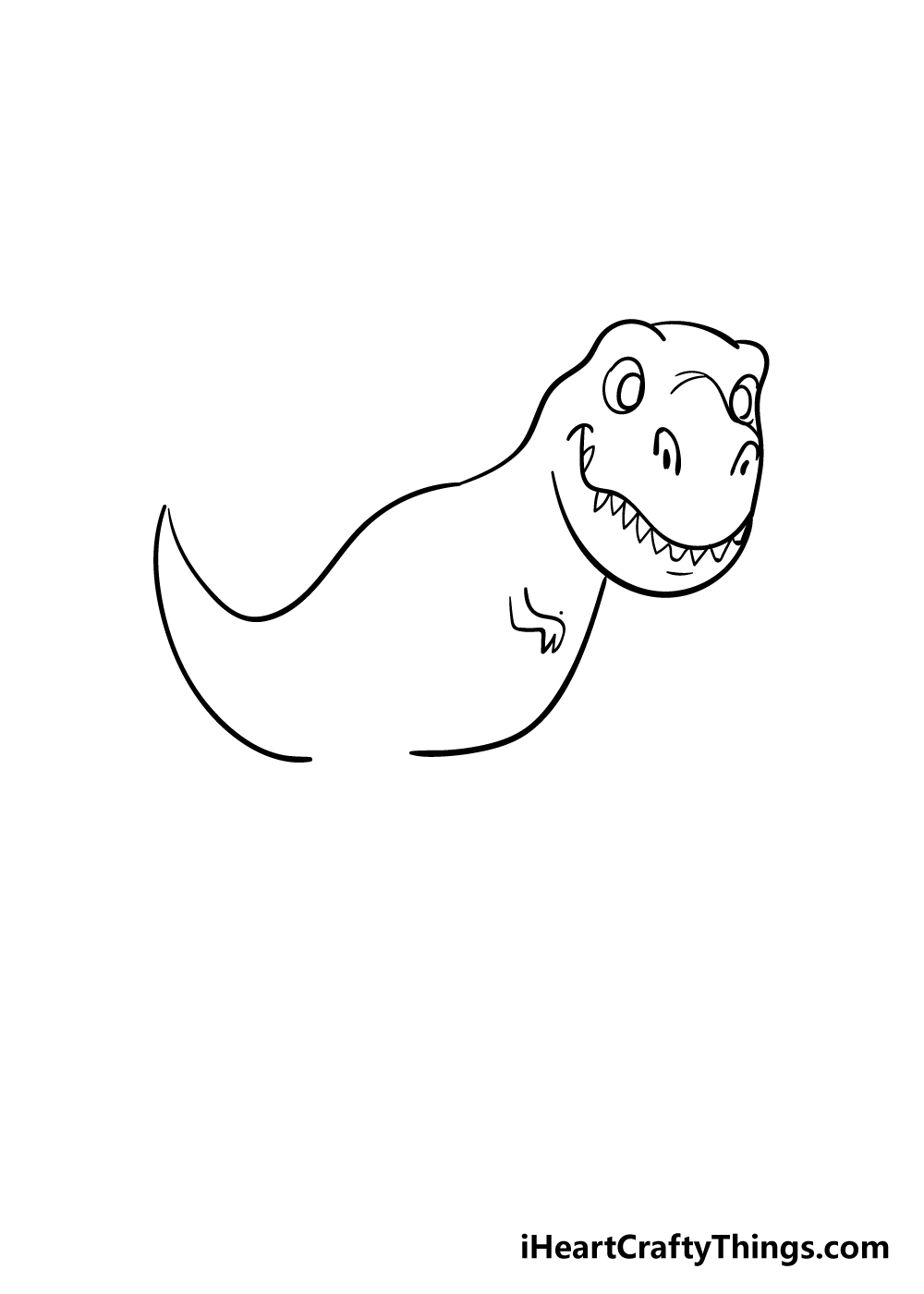 A T-Rex needs a big, toothy mouth, so we shall be adding one in this step of our guide on how to draw a T-Rex.

Before you draw the mouth, first draw some curved lines with dots inside of them for the nostrils. Then you can draw a very curvy line with sharp teeth coming from it for the mouth.

Finally, you can draw the characteristically small T-Rex arm onto the body. 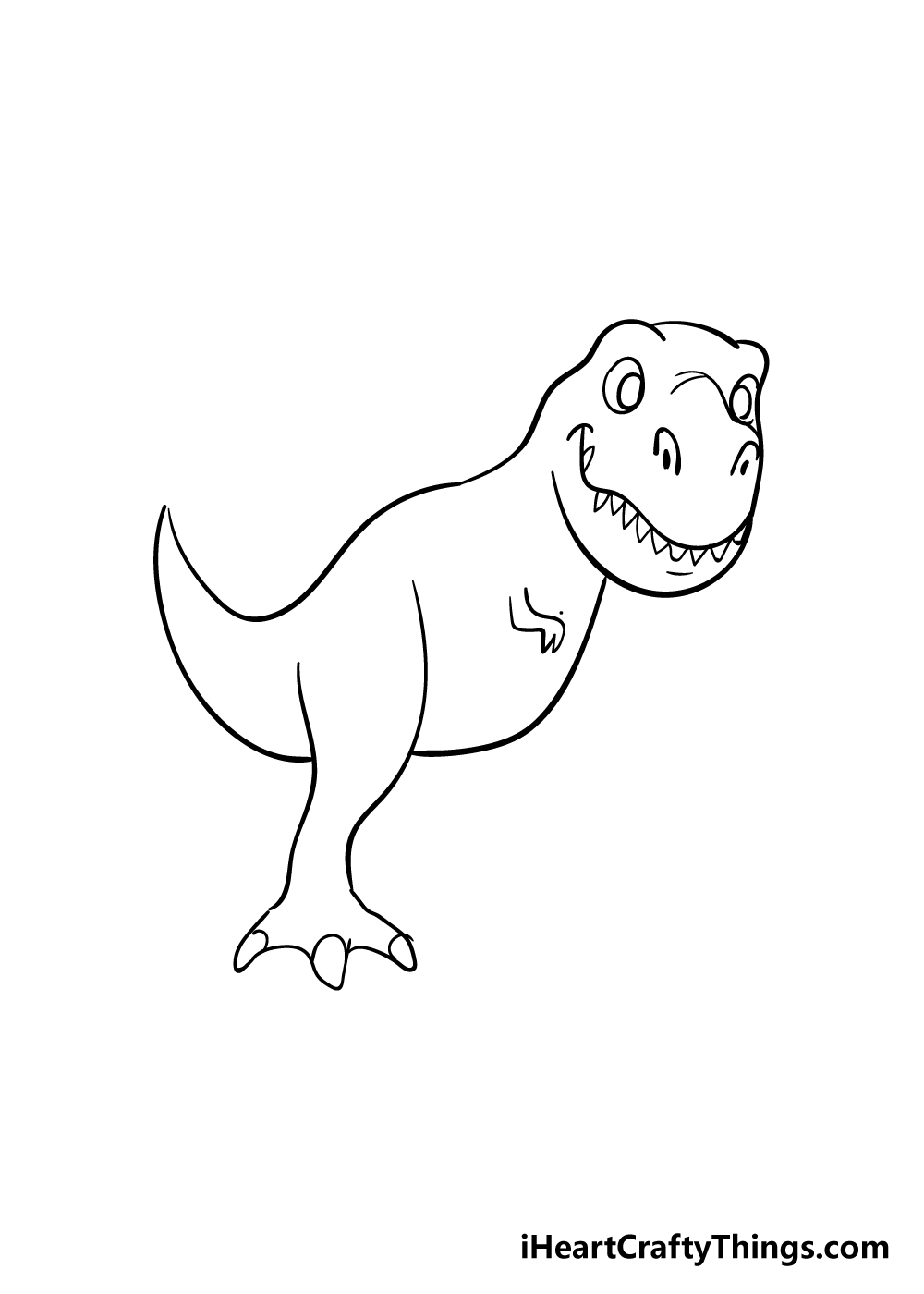 We left a space at the bottom of your T-Rex drawing earlier, and we will be filling it with the first leg of the dinosaur.

A T-Rex has big, muscular leg with giant claws at the end, so simply draw some curved lines coming down with sharp points for the claws. Once you have it looking like our reference image, you can move on!

Step 6 – Draw some body details on your T-Rex 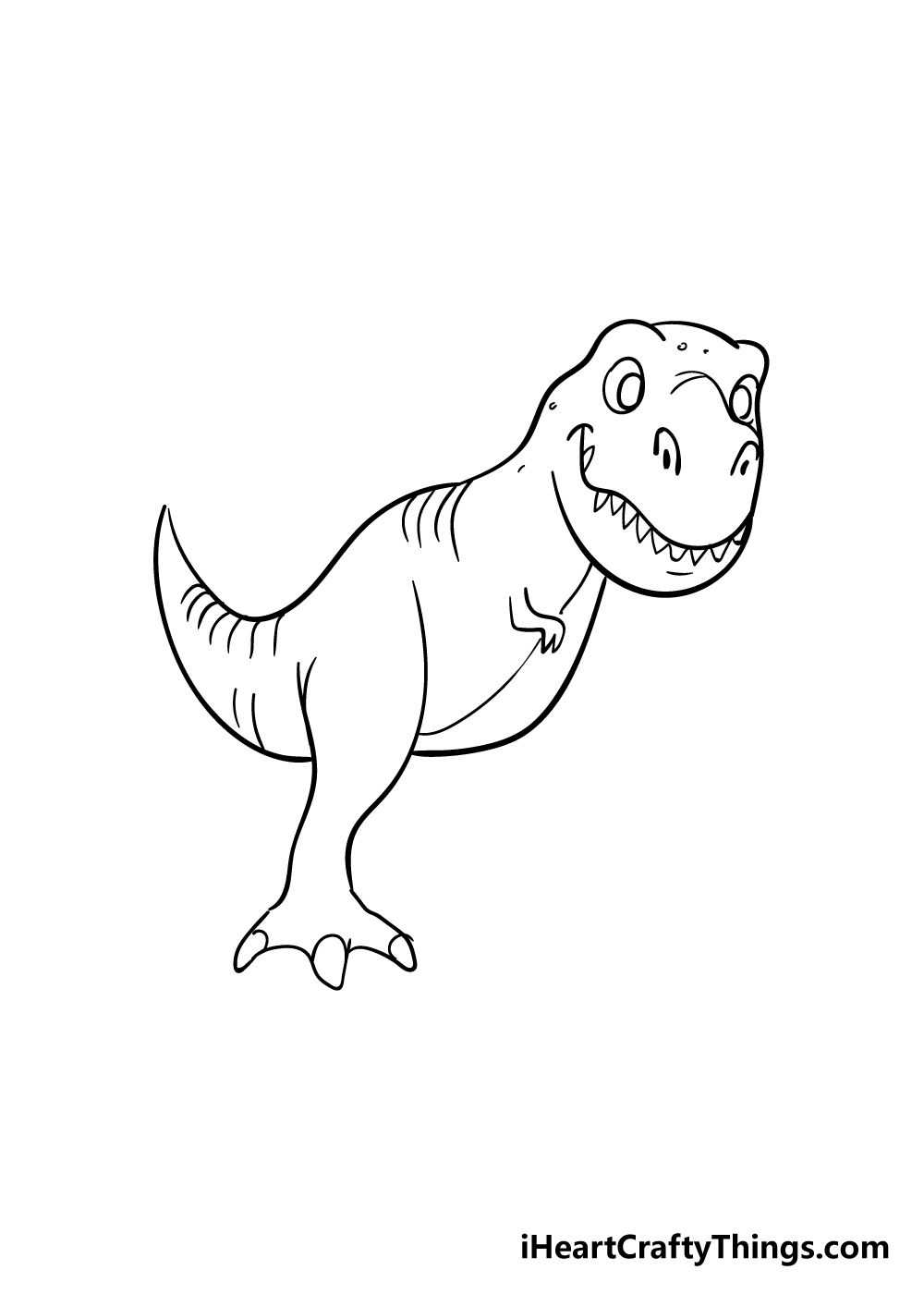 In this next step of this guide on how to draw a T-Rex we shall be drawing some details to the body.

You can use some simple curved lines to add some details to your dinosaur. Then, you can use a line going up the side of the belly to create some definition for that area.

Step 7 – Draw the other arm of your T-Rex 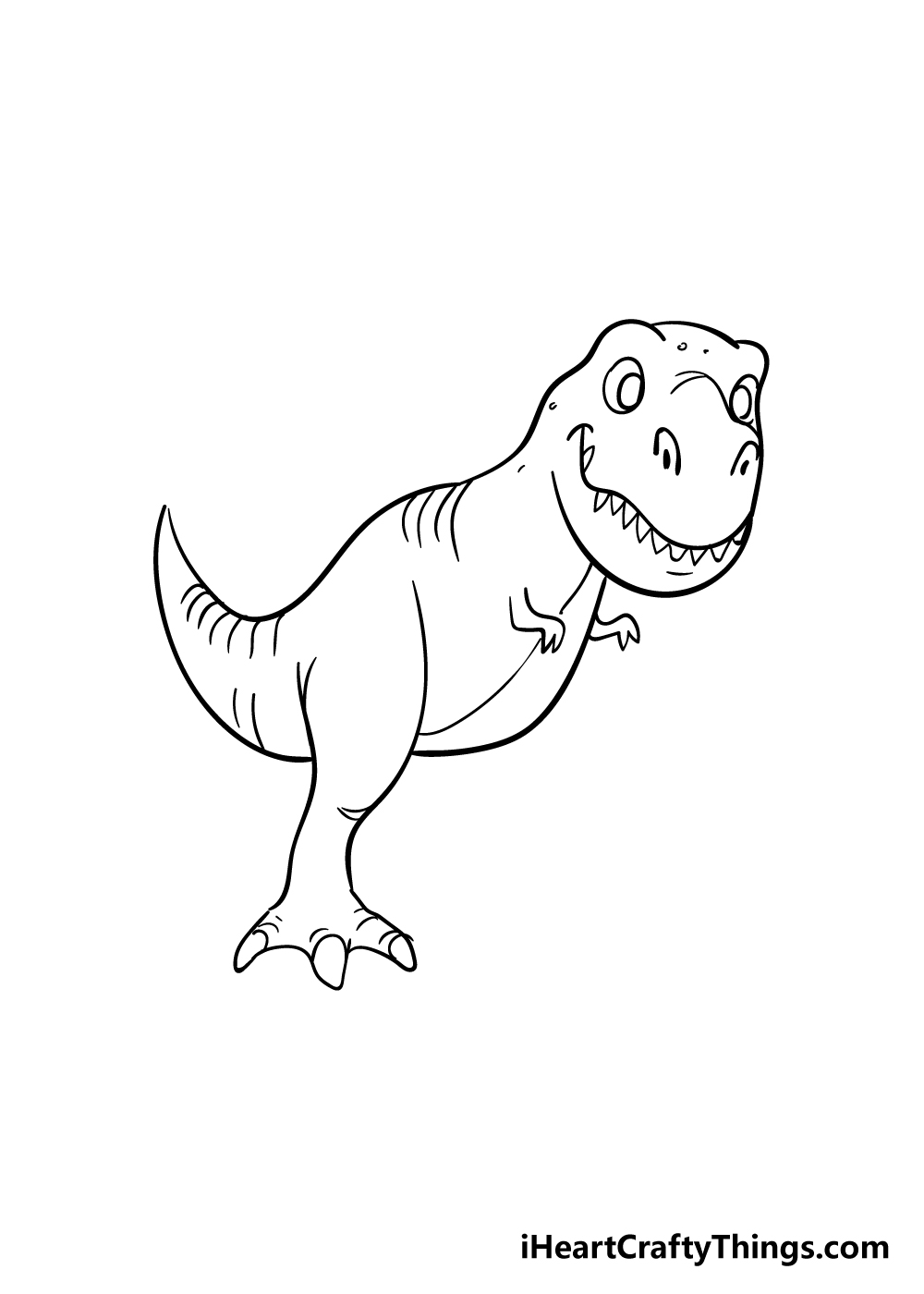 This step of your T-Rex drawing will be quite simple!

You can draw another arm coming off the side of the body that matches the other one, and then add some lines to the knee. That’s all there is to it for this step!

Step 8 – Now, add the other leg and final details 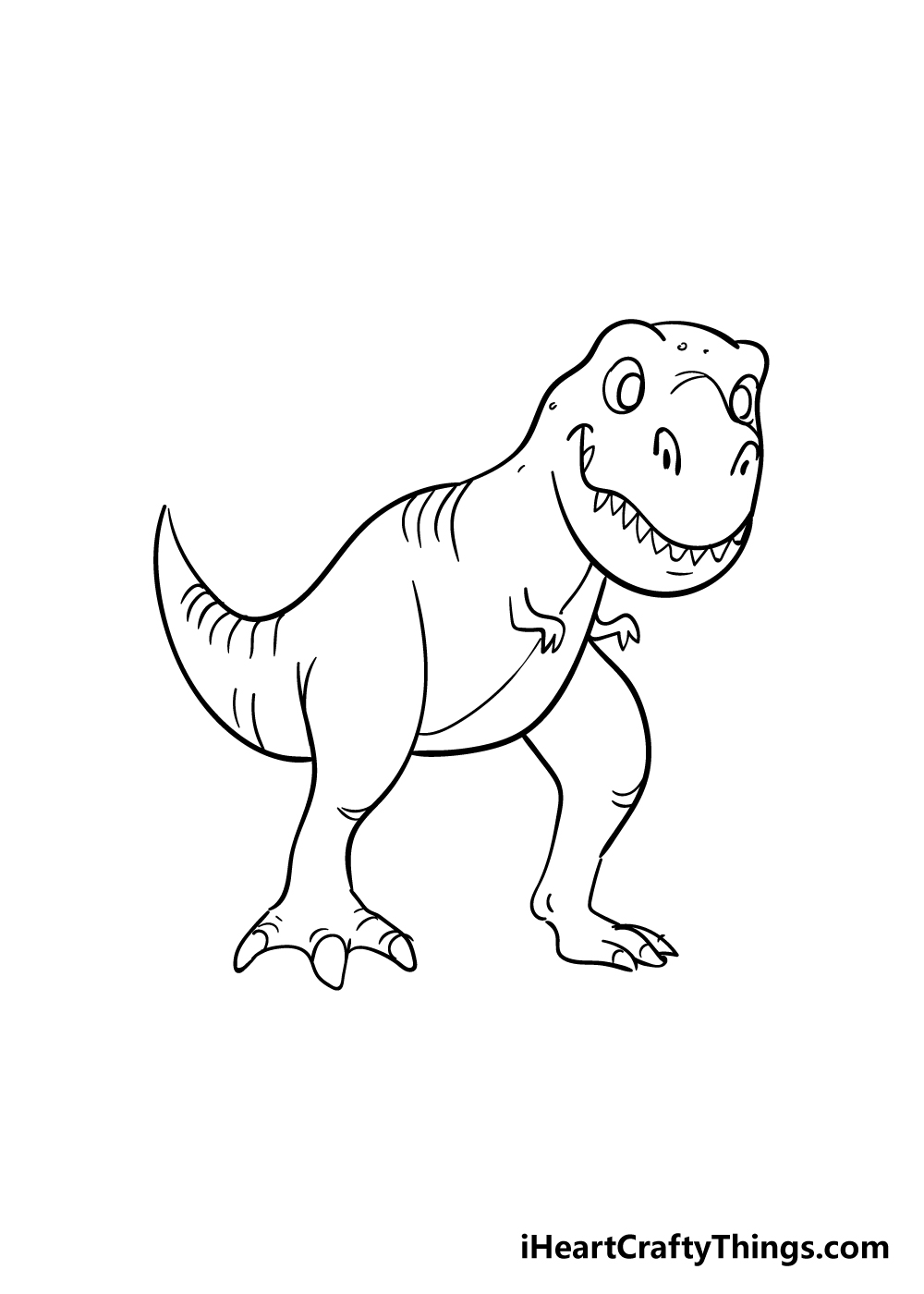 Before we move on to the final step of this guide, we shall add the other leg of your T-Rex. This will come off the other side of the body, and should match the other leg that you have drawn.

With that element done, you can add any extra elements that you may like for your drawing! An example could be drawing a great background for your image! How will you finish off your T-Rex drawing?

Step 9 – Finish off your T-Rex with some color 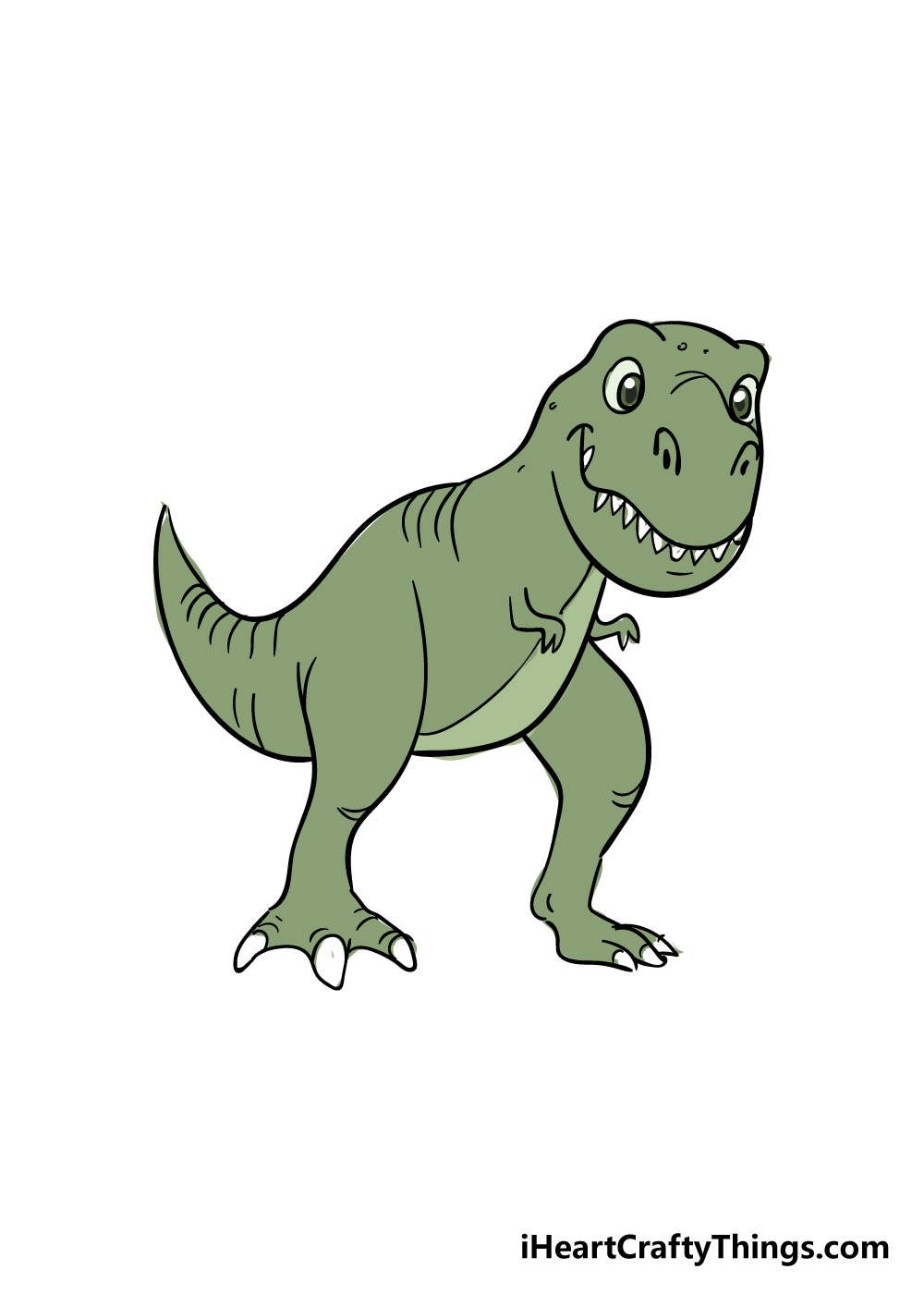 Now that you have finished drawing your amazing T-Rex, you are ready for the final step of this guide on how to draw a T-Rex!

You can now bring your image to life with some beautiful colors, and you can really let your imagination run wild for this step.

Scientists are divided on what colors dinosaurs would have been, so this is your chance to show us what you think the T-Rex would look like.

Once you know which incredible colors you would like, maybe you could experiment with a new art medium such as paints, watercolors and colored markers.

How will you finish off this drawing with your creativity?

Make the king of the dinosaurs even cooler as we give you 4 helpful tips!

The t-rex is one of the most recognizable and popular dinosaurs, but there are also many others that people love! When you have finished this t-rex drawing, you could make it even better by adding some more dinosaurs to the page.

These could be big ones like the diplodocus or a stegosaurus, or they could be smaller ones like the velociraptor. It’s up to you, and you could create a really fun scene with all of your favorite dinosaurs!

Some scientists believe they may have been covered in feathers, so this is one way that you could cover the t-rex. These small details can drastically change the design of the t-rex, and there are many creative approaches that you can take for it!

Next, you could try drawing a background for this drawing of a t-rex. There are many different environments you could choose if you wanted to do this.

The t-rex could be in a jungle setting or maybe a prehistoric landscape with a volcano. These are two locations, but you could really create any kind of place you like as you finish off this scene.

Where do you think this t-rex could be hanging out?

We’ve spoken about making this t-rex drawing more realistic, but you can also go in the opposite direction. By adding and changing a few elements, you could even create a fantasy creature!

For example, you might want to turn this t-rex into a dragon. By adding some big wings and some flames, you could easily do just that.

Or, maybe you want a cool t-rex cyborg, and you could do this by adding some robotic parts onto the t-rex. What are some ways that you could transform this dino?

Your T-Rex Drawing is Complete!

That closes off this guide on how to draw a T-Rex, and you have an amazing picture at the end of it!

We really hope that this guide showed you not only how easy it can be to draw a T-Rex, but also that it can be lots of fun doing it.

Now that you can draw a cool T-Rex, you could draw even more variations by using different positions, facial expressions or even a great background.

You can really create a wonderful mood for your image using things like extra details, some more elements and dinosaurs or even with the colors that you use.

You should really let your creativity run wild and you may be surprised what you end up with!

We hope that you will check out our website, as we not only have tons of great drawing guides for you but we will be bringing out more constantly!

Once you have finished your T-Rex drawing, please be sure to share it on our Facebook and Pinterest pages for us to enjoy! We can’t wait to see your mighty dinosaur. 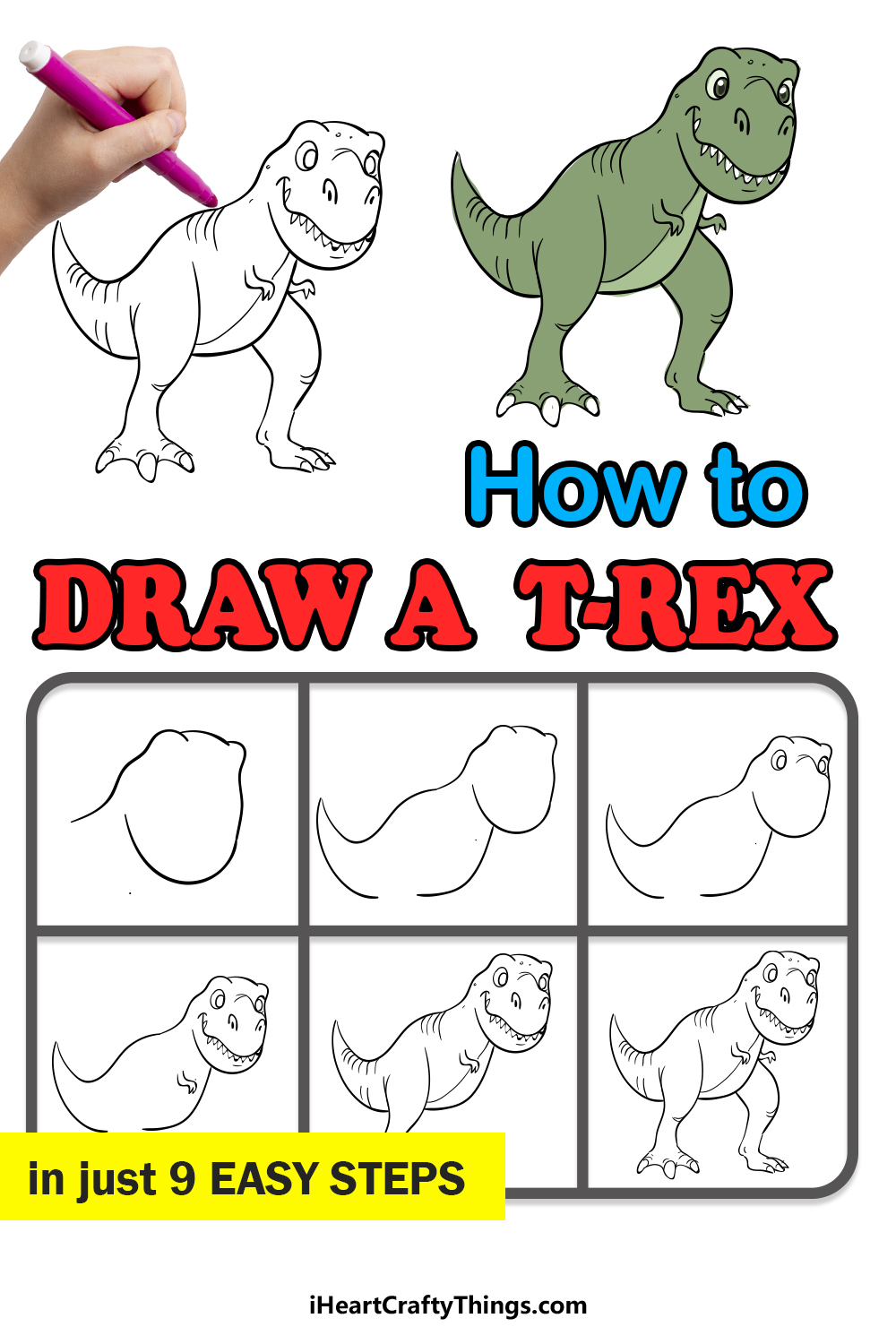 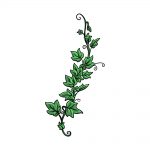 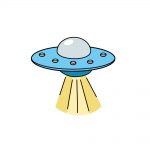