There are lots of different superheroes in our various forms of media, and they have many different powers, abilities and designs.

The face of superhero media would probably be very different without the original superhero: Superman!

Since 1938, Superman has been thrilling audiences young and old with his many comics, movies, films, video games and other forms of media.

Learning how to draw Superman can be a great way to celebrate this legendary hero!

Drawing these kinds of characters can be a challenge, however, so this is the guide for you if you would like to know how it’s done.

Get ready to fly into action with this step-by-step guide on how to draw Superman! 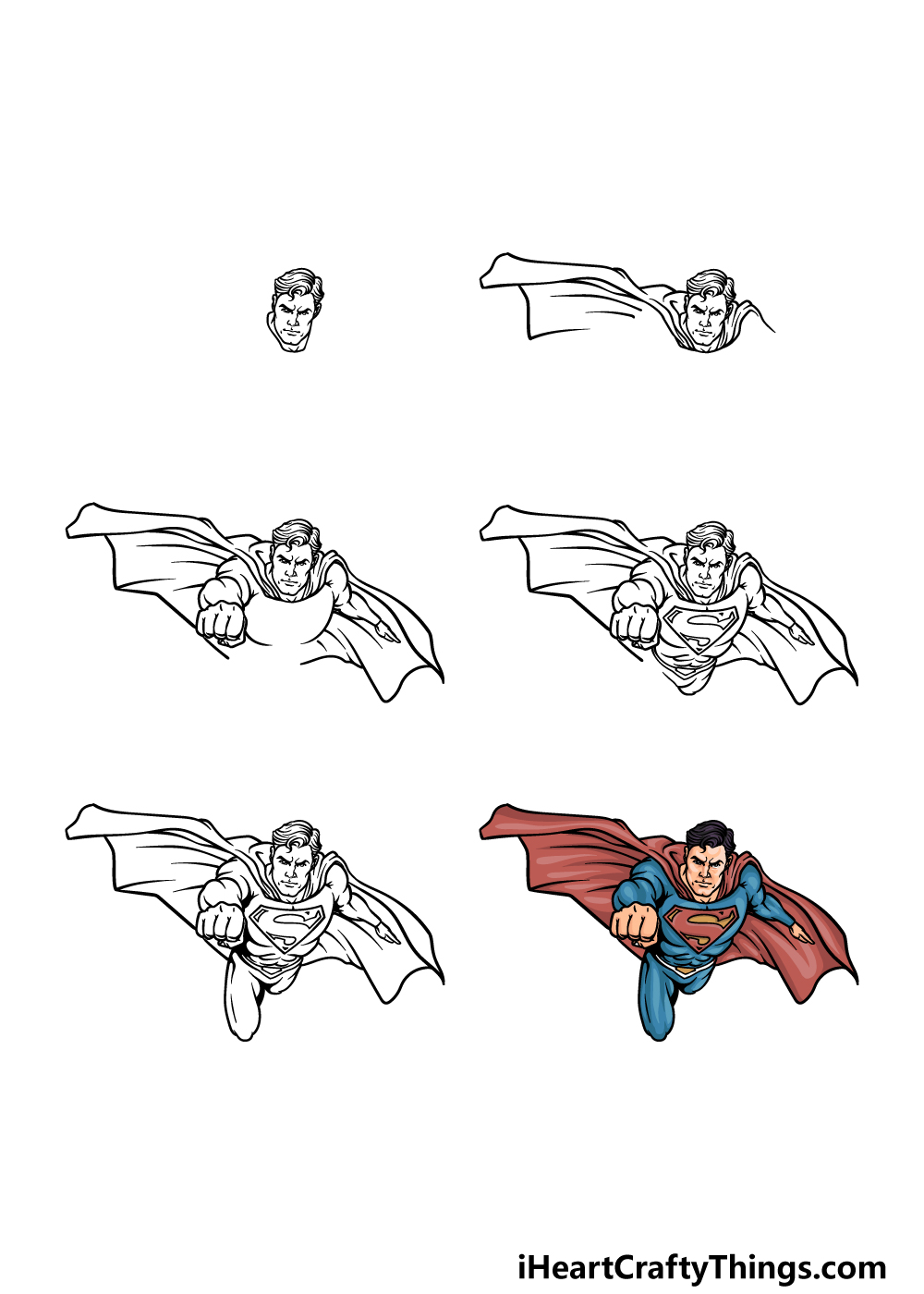 How to Draw Superman – Let’s Get Started! 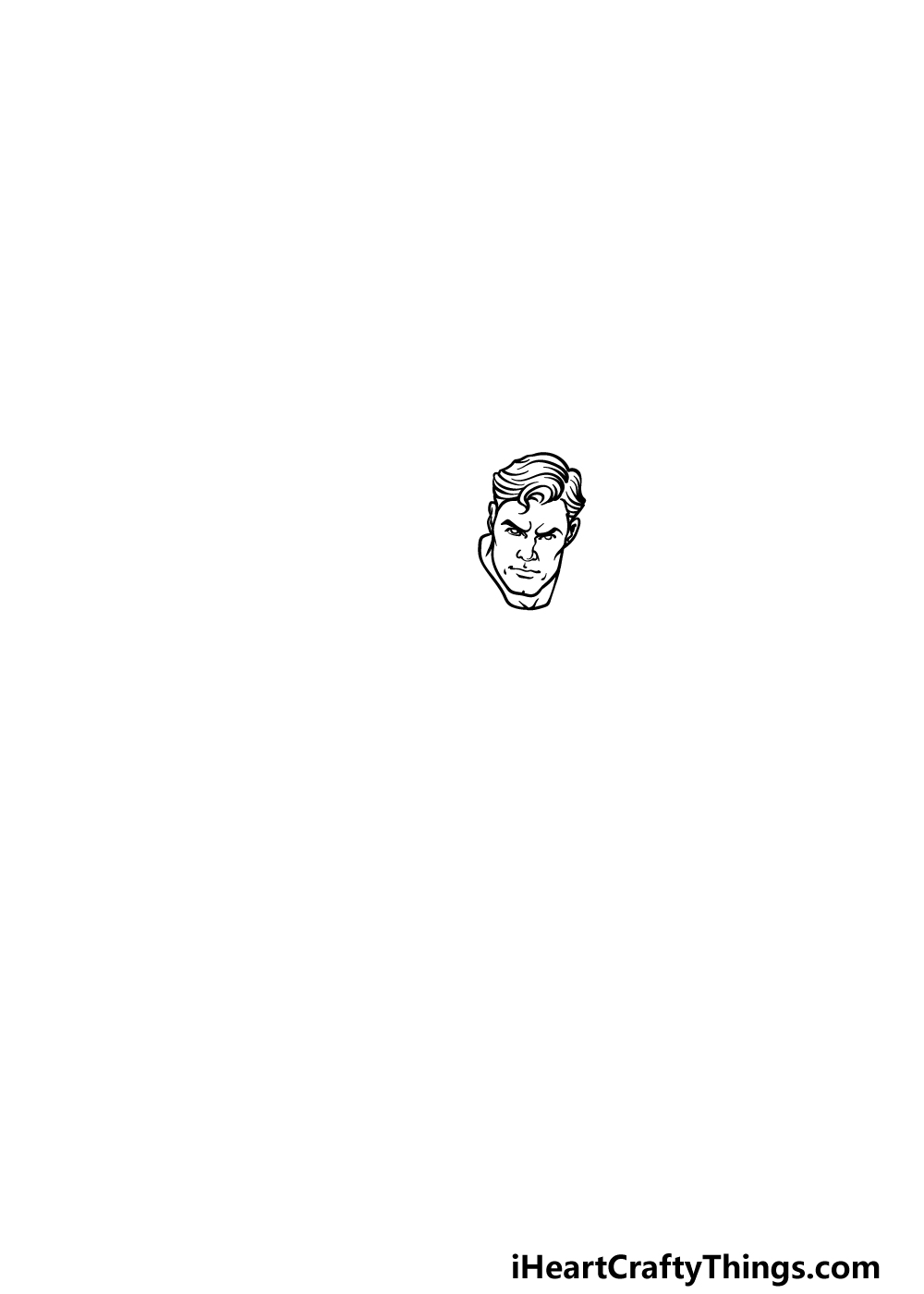 For this first step of our guide on how to draw Superman, we will start with his head and face. Many superheroes will wear elaborate masks, but Superman doesn’t wear any kind at all.

This may make drawing his head a bit easier than it may be for different masked heroes!

You may want to start by drawing an oval in pencil, as this will help to keep his head in proportion when you draw the final details.

He has quite an intense expression in this image, and you can draw his facial elements using some fairly simple ines.

Then you can draw his face outline around his facial details, and these will include his ears and square jawline. Then we will draw his distinctive hairstyle including the classic ‘Superman curl!’

Finally, we can draw the start of his outfit around his neck, and then you have completed step 1!

Step 2 – Next, start drawing his cape 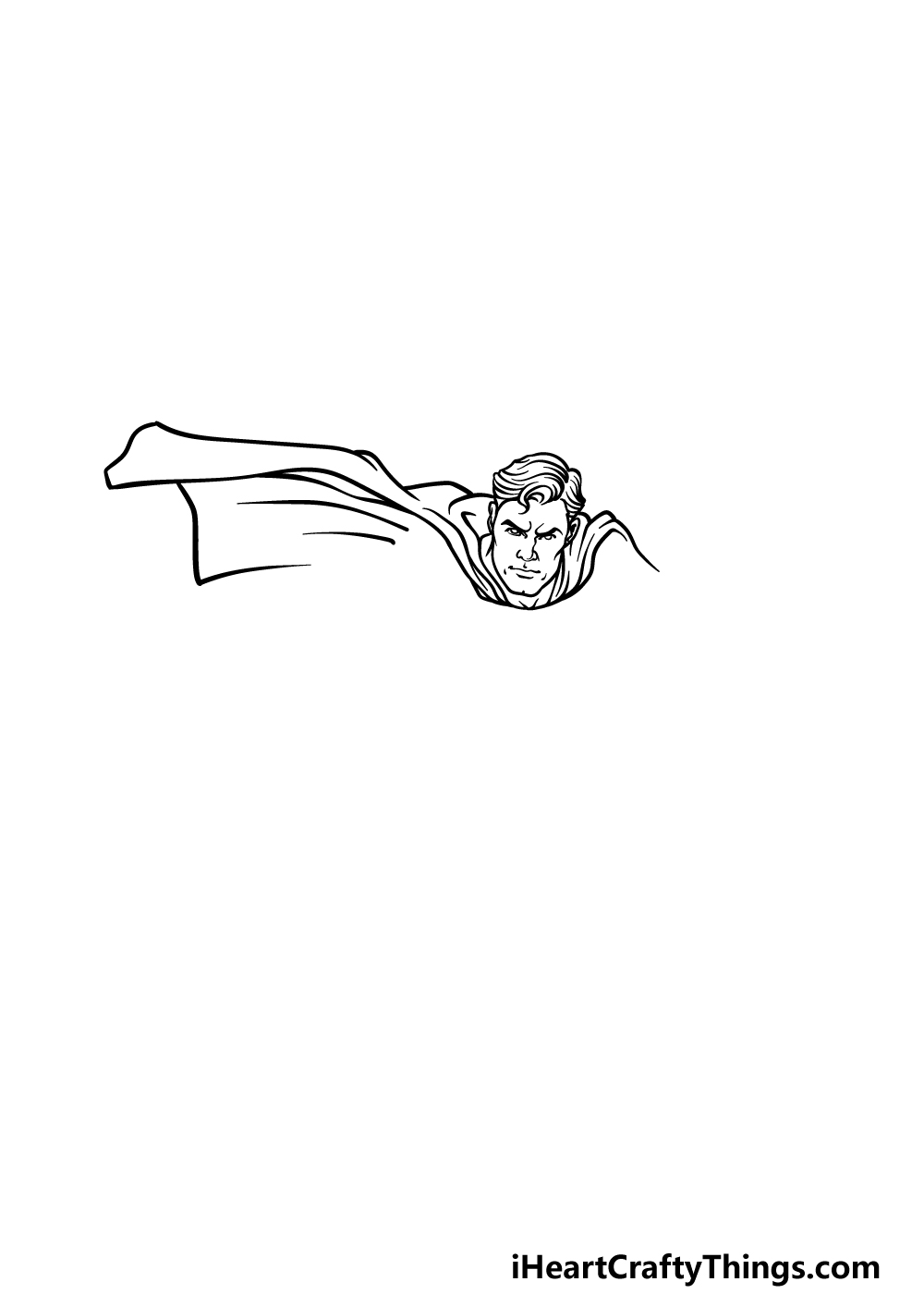 One of the most iconic aspects of Superman’s outfit is his flowing red cape trailing behind him, and this is what we will start to draw in this second part.

We will be drawing some curved and rounded lines extending from the collar of his outfit and flowing behind him.

While you work on this part, you should try your best to replicate all of the lines just as they appear in the reference image. We will be adding more to the cape later, so let’s keep moving on!

Step 3 – Draw his arms and the rest of his cape 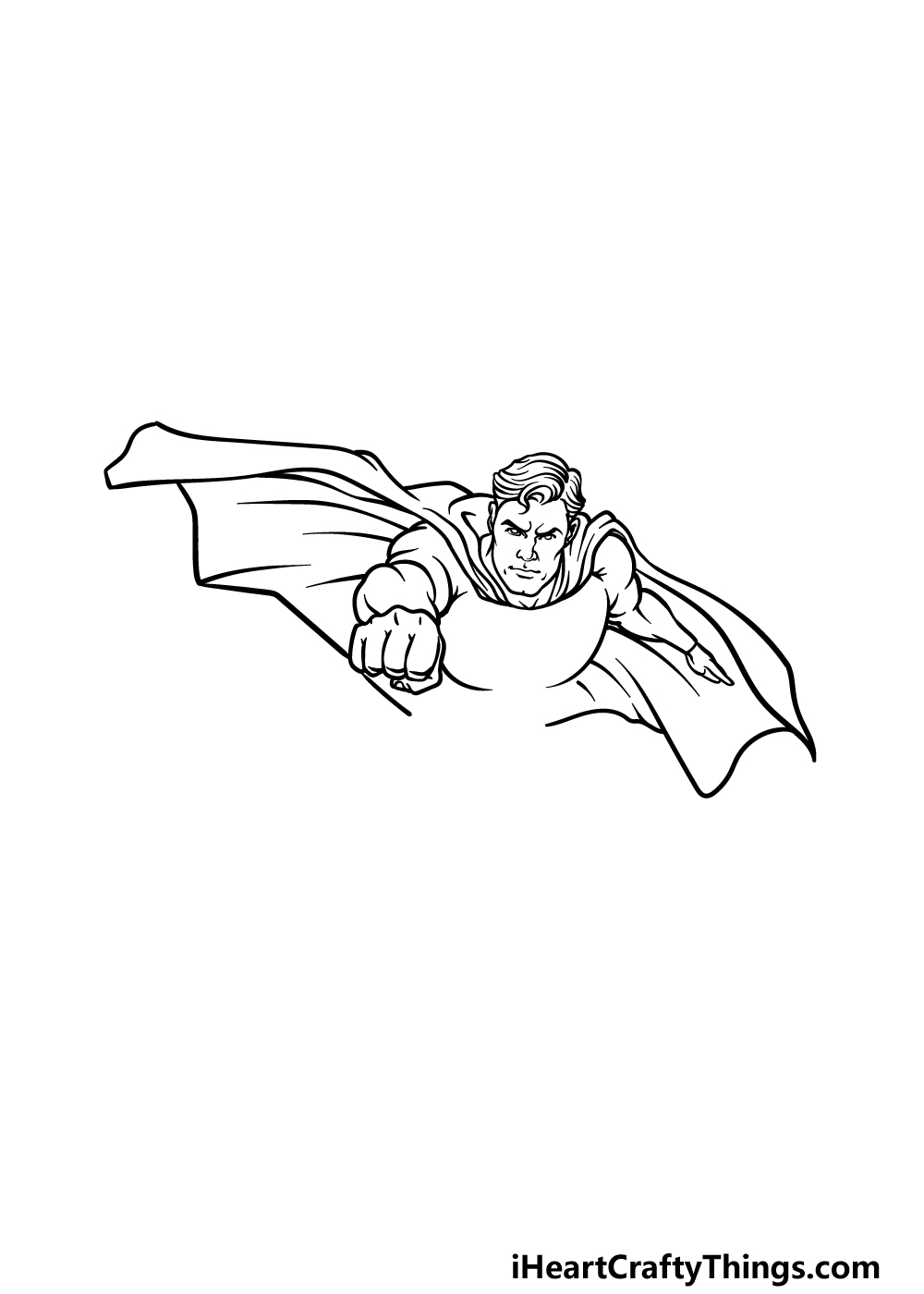 In this step of our guide on how to draw Superman, we will be drawing his arms and some more of his cape.

His flying pose is to extend a fist in front of him as he soars through the air, and this the pose that he will be in for this image.

Start by drawing his fist on the left, and then use some more curved and rounded lines for his arm behind it.

This is another step where you’ll want to try and replicate the reference image as closely as you can to get the proportions right.

The arm on the right will be poking out to the side, and then you can start to draw his chest as well. Finally, draw some more of his cape flowing out to the right to finish off this step.

Step 4 – Now, draw his chest symbol and more of his body 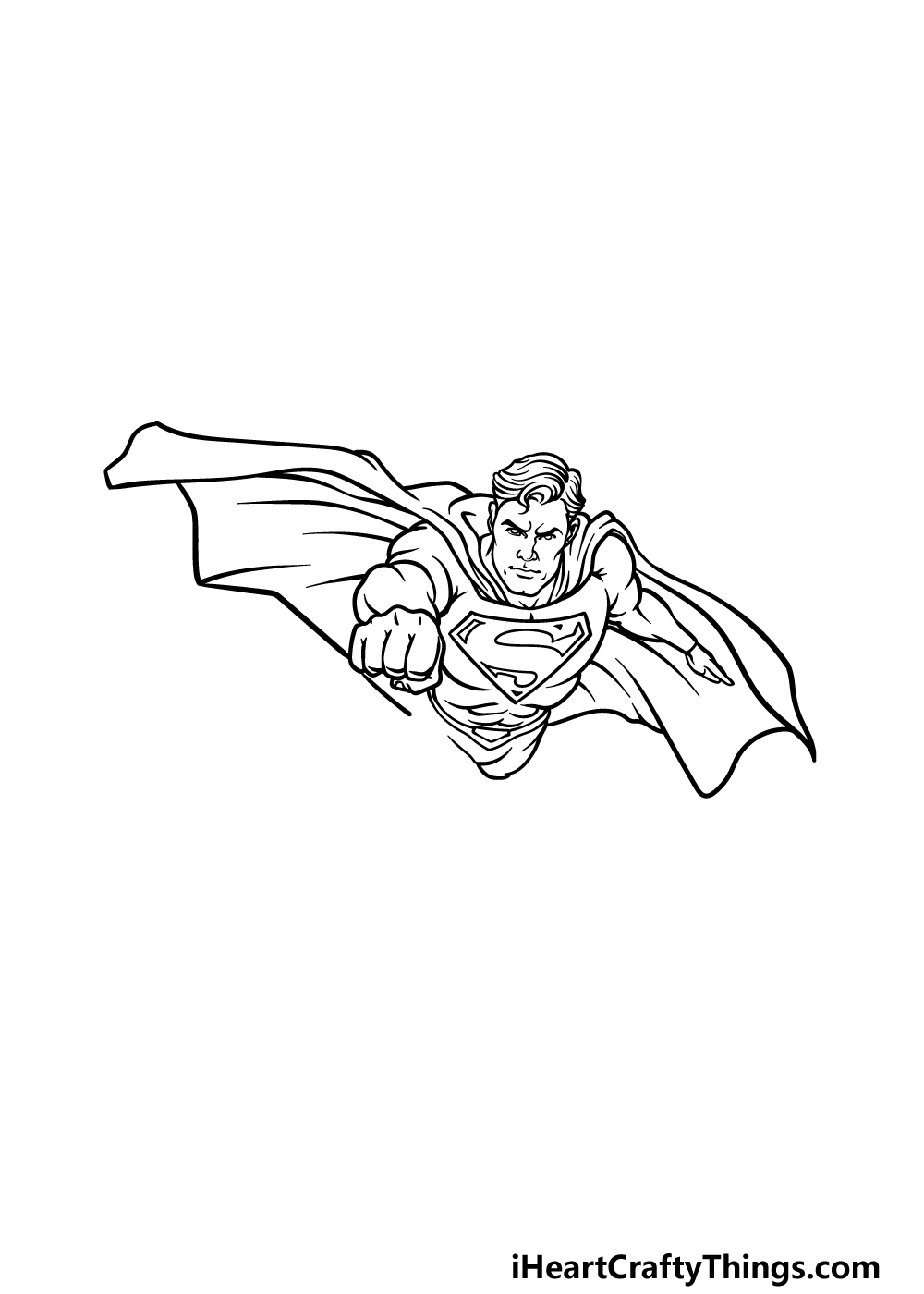 Another really iconic and recognizable aspect of Superman’s design is the S logo he wears on his chest.

This symbol can be harder than you may think to draw, so start off by drawing the triangular outline of the symbol, using the reference image as your guide.

Once you have drawn that, you can add some smaller curved lines for the musculature on his chest and waist.

You can finish off with the belt and the start of his legs, and then you’re ready for some final details in the next step of your Superman drawing.

Step 5 – Next, draw the final details for Superman 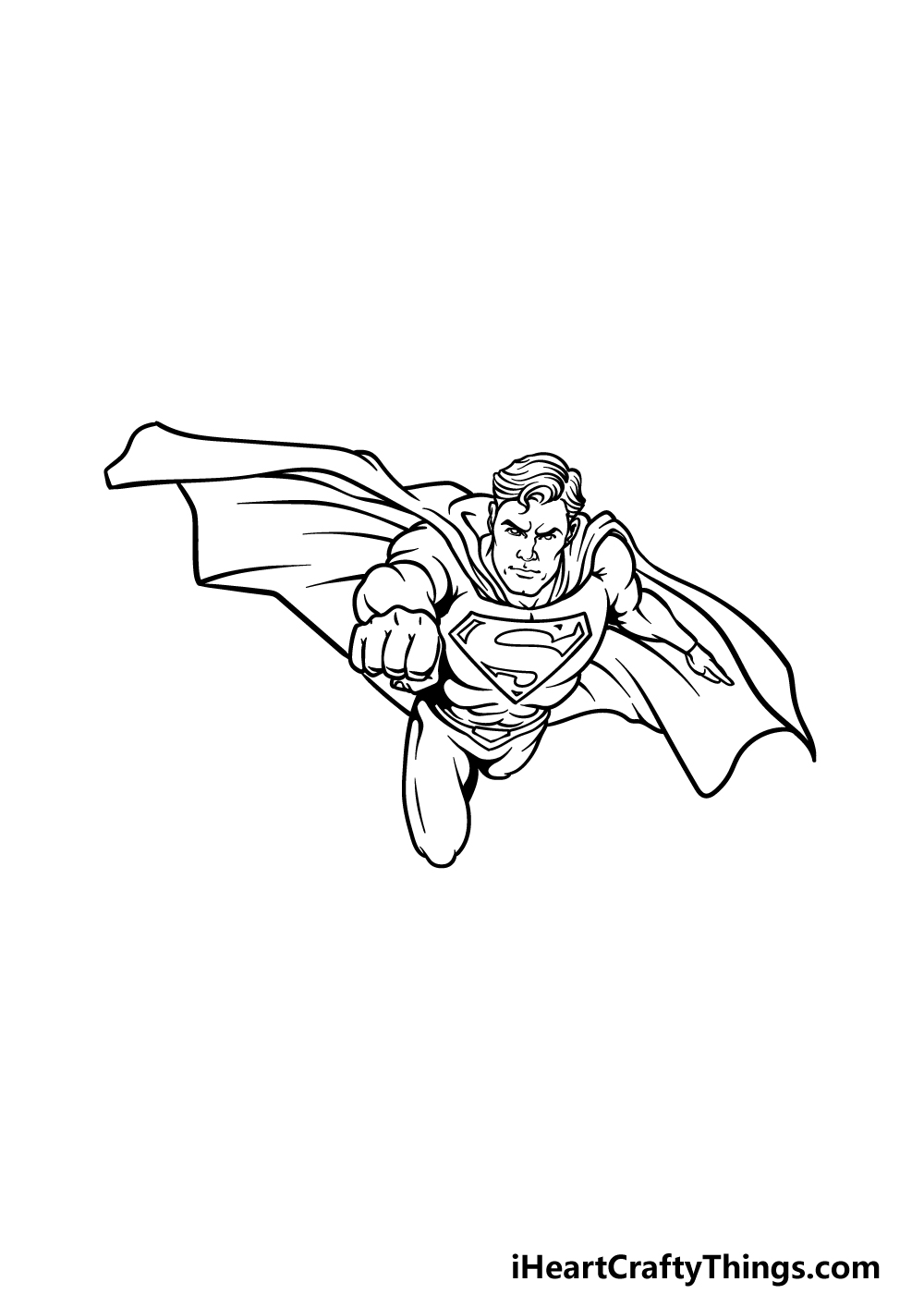 In this fifth step of our guide on how to draw Superman, we will be finishing off the final details and elements. The main thing to add will be his leg on the left.

You can draw this with some curved lines to show that it is bent inward as he soars through the air.

Then there is simply some shading detail to add on his chest, and then you’re ready to move on to the final step!

This is your drawing, so you can also add some details of your own before you move on to the final step.

Maybe you could draw his home of Metropolis in the background or draw more of his superhero allies flying alongside him. How will you finish off your Superman drawing before the final step?

Step 6 – Finish off your Superman drawing with some color 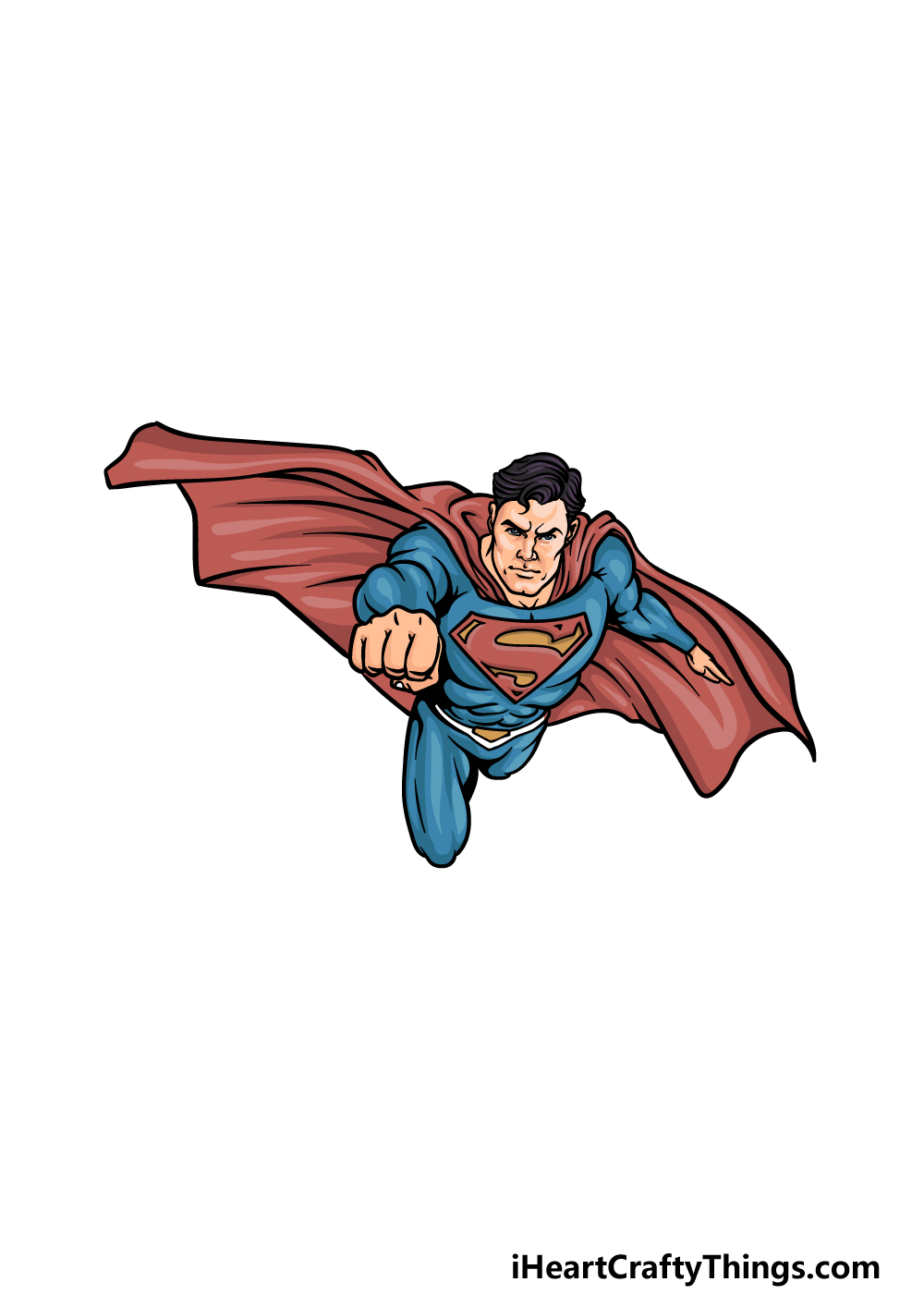 You’ve reached the end of your Superman drawing, and in this one you can finish off with some amazing colors!

Superman has had a few variations throughout the years, but he is most commonly shown in his signature red and blue color scheme.

This is the color scheme that we went for in our reference image, so you can use it as an example if you want to create a classic look for him.

You could use some brighter mediums like colored pens and markers for a comic book style to the picture, but any colors and mediums you use will look great!

Do this to take your Superman drawing to the next level

Save the day with these awesome tips for your Superman sketch that will make it even better!

This drawing of Superman shows him in his classic red and blue outfit, but he has worn many variations of this outfit throughout the years.

You could show your favorite one by changing the design a bit!

This variation of his outfit could be based on a film or comic appearance, and there would be so many to choose from. Do you have a favorite look for Superman that you could use?

Superman is often joined by many other heroes, and you could add some of them to this drawing. This could be characters such as Batman or maybe Wonder Woman.

Or, you could draw a less super character he interacts with such as Lois Lane.

Once again, you could pull from both the comics and films that Superman has appeared in to choose some allies to be beside him in this picture.

You could stick to DC characters or show what it would be like if Superman were to team up with some classic Marvel characters!

Of course, every hero needs some villains to take on, and these evil characters could also be added to your Superman drawing. The most obvious choice would be Superman’s arch-enemy, Lex Luthor.

There are so many memorable villains you could add, and these could even include villains Superman rarely faces such as the Joker. What are some bad guys you could add to make this picture more menacing?

Superman can fly anywhere in the world, and that means that you could have all kinds of cool settings for the background of this Superman sketch.

For one example, you could have him soaring through a famous DC Comics city like Metropolis or maybe Gotham. Or, you could find some beautiful locations and have him visit them.

Maybe he could be flying past Mount Everest or perhaps through the Grand Canyon. Where else could you imagine Superman flying through on his adventures?

Your Superman Drawing is Complete!

We hope that you had a super time recreating this famous superhero in our guide on how to draw Superman!

By breaking it down into smaller steps, you can make even the most detailed drawings much easier to take on, so we hope this guide made it fun and easy for you to take on.

Don’t forget that you can also add to this drawing by adding your own details and elements, so be sure to have fun getting creative with it!

There are plenty of incredible drawing guides for you to enjoy on our website as well! You should make sure to visit us often, as we upload new guides often for you to enjoy. 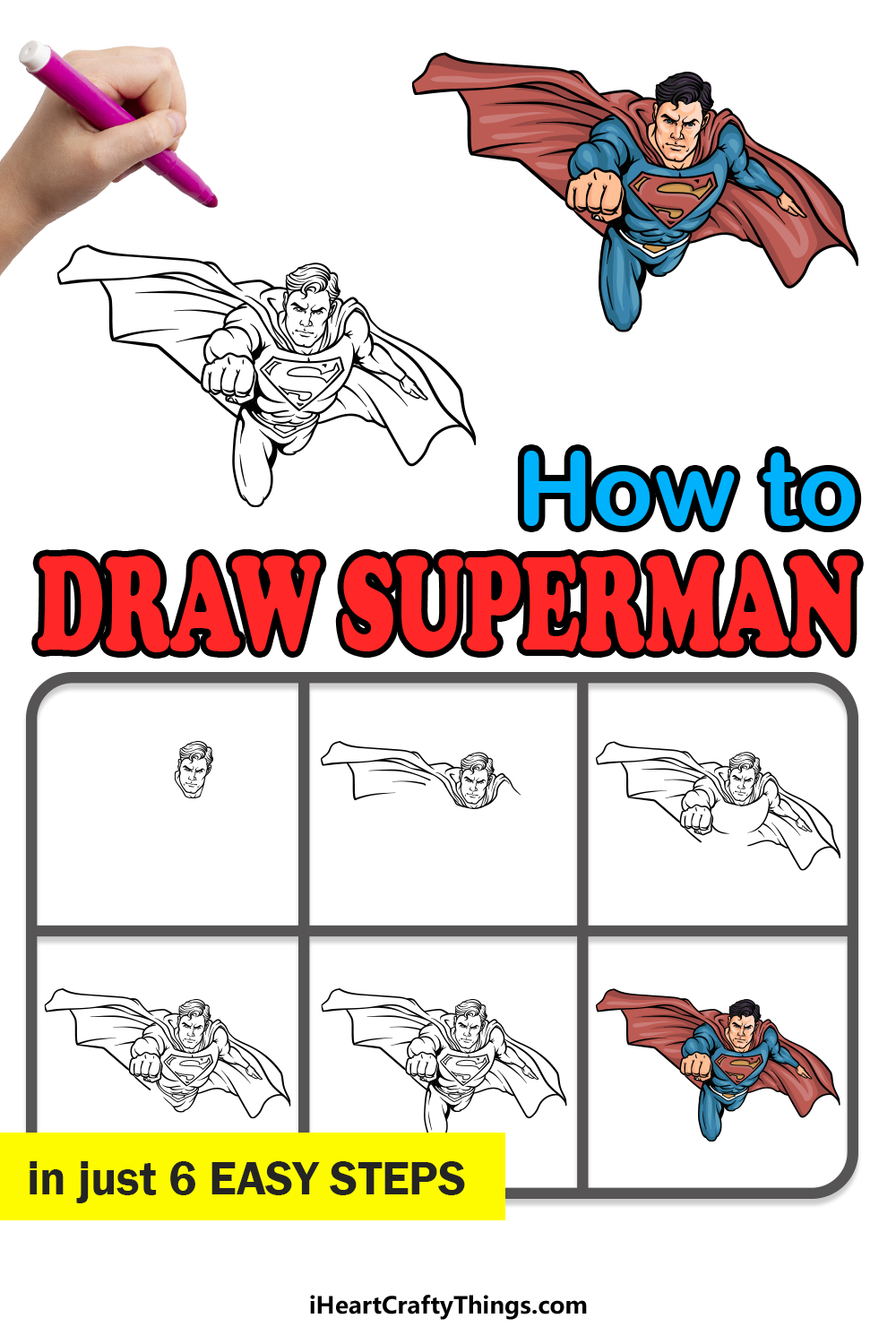 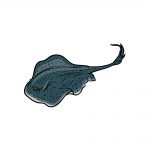 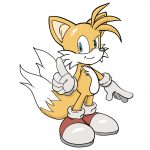