The sheep is a domesticated ruminant mammal typically kept as livestock. Sheeps belong to the Bovidae family, which includes antelopes, cattles, and goats.

They are most commonly distinguished by its thick woolly fleece and a pair of spiral pointed horns. 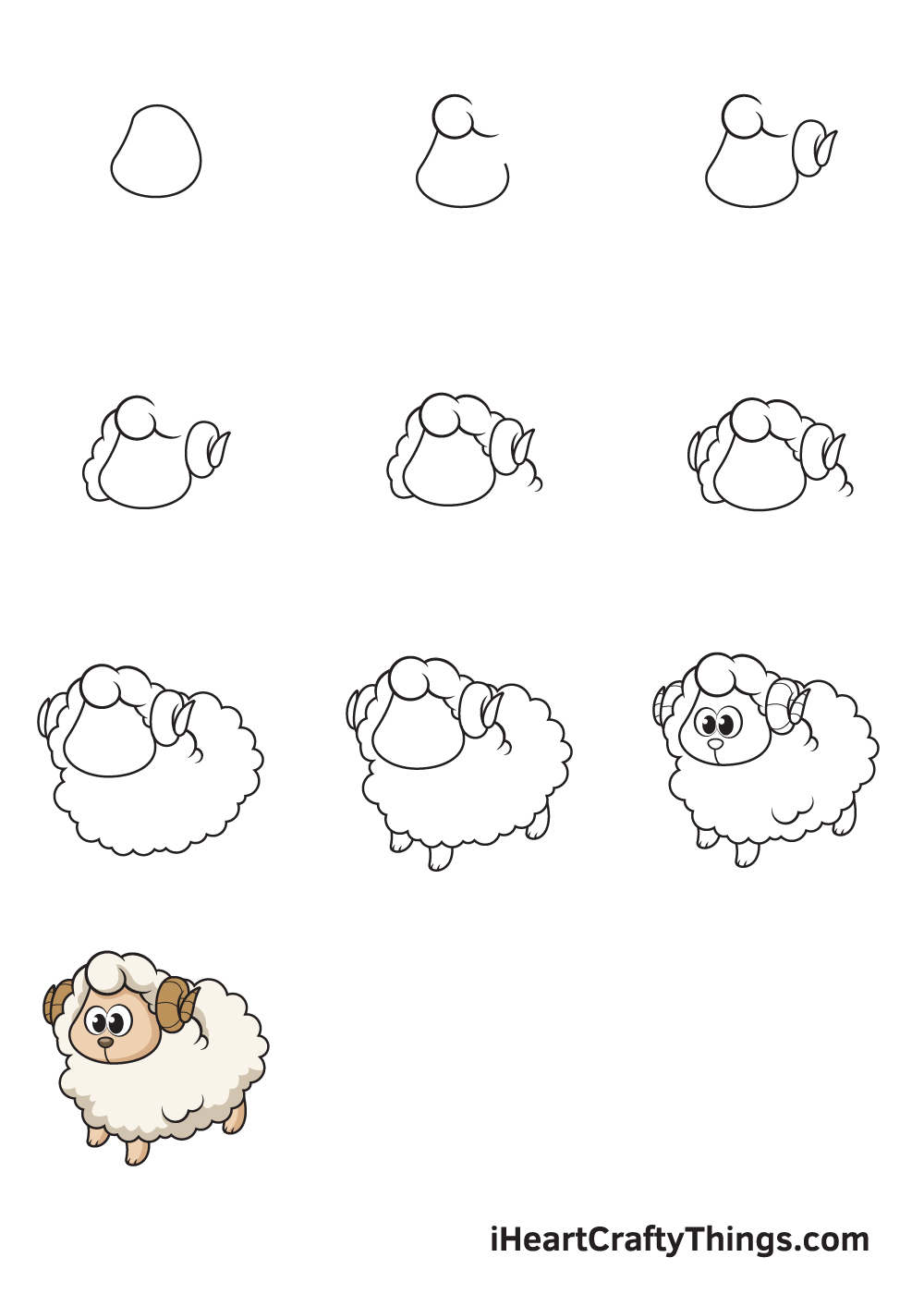 Because of the sheeps’ adorable features, they are very interesting subjects to draw. Thus, we have created a step-by-step process on how to draw a sheep, summed up in 9 quick and easy steps.

What’s more, each instruction comes with an illustration to make the steps a lot easier for you to follow!

How to Draw a Sheep – Let’s get started!

Draw an irregular circle shape forming the head of the sheep. This figure must have a wider bottom compared to its top part.

Remember, it’s important to draw with light strokes when drawing an outline.

Avoid pressing down too hard with your pencil so you can easily erase some parts of the outline that you may no longer need later on.

Step 2 – Create an Outline of the Sheep’s Head

At the top of the sheep’s head, draw a curved line nearly forming a circle. Then, draw a shorter curved line right beside it. This forms the coat clumped at the top of its head.

Sheeps typically have long, thick coats. So, keep that in mind when drawing the fur. Remember that it’s okay if the coat appears disheveled. As a matter of fact, the more jumbled the clumps of fur are, the softer and more realistic it looks.

Step 3 – Draw the Left Spiral Horn of the Sheep

Though most sheeps typically have a pair of spiral horns attached on their forehead, some sheeps have none. For the sake of this tutorial, we’ll be drawing a pair of horns to make the sheep more detailed.

Proceed by drawing a spiral figure on the upper right side of the sheep’s head. The spiral may seem difficult to draw, but it’s actually a lot easier than you think!

Simply draw an upright oval shape with a droplet figure on its side. And there you have it—our sheep now has one of its horns!

Step 4 – Add More Fur on the Side of its Head

Create more clumps of coat on the left side of the sheep’s head by drawing a line with multiple curves.

Repeat the previous step to add more coat at the top of the head of the sheep.

After completing this step, the entire head of the sheep should now be surrounded with a fluffy-looking coat.

Draw the left horn attached on the left side of the sheep’s head.

Since the sheep is facing towards the left side, the left horn wouldn’t be completely visible, as shown in the illustration.

Step 7 – Outline the Entire Body of the Sheep

Draw a line with multiple curves forming an oval shape to create the woolly body of the sheep. When drawn correctly, the body should look like a fluffy ball of cotton.

The bigger the shape, the chubbier the sheep will appear. We think the sheep’s rounded, bulky body surrounded with fleece is what makes it look extremely adorable!

Step 8 – Next, Draw All Four Legs of the Sheep

Right underneath the body, draw three U-shaped curved lines to create the three visible legs of the sheep.

Don’t forget to add lines on each foot to create the appearance of hooves—one of the sheep’s most distinct features!

Finalize your sheep drawing by adding the facial features. Continue by drawing two enormous standing oval shapes side by side to outline the sheep’s pair of eyes.

Then, within each eye, draw a smaller oval shape with a tiny circle inside. Shade the inner oval shape while leaving out the small circle unshaded to create the illusion of “gleaming eyes”

Afterwards, draw an inverted triangle shape with a vertical line at the bottom to create the snout of the sheep.

Now, last but not the least, make sure to add multiple parallel horizontal lines on the surface of each horn, creating a crucial detail!

Be proud of yourself because you have successfully drawn an adorable woolly sheep! Now, it’s time for the much-awaited part, which is choosing the colors and coloring the sheep.

Make sure you show off your artistic skills in this part, especially your ability to mix and match various colors.

Though the sheeps that we frequently see are colored white, there are actually some sheeps with dark-colored wool.

Generally, the color of a sheep’s fleece varies from white and cream to brown and black.

You can opt to color the sheep using their traditional colors or use a unique set of colors.

We recommend doing the latter so you can customize your artwork, making your drawing activity experience a lot more fun!

Do this to take your sheep drawing to the next level

Have even more fun with this sheep sketch as we show you some fun ideas to try!

A sheep is an animal that is rarely seen on its own. They will usually be kept in groups, and that is a good way to make this drawing of a sheep even better!

Now that you know how to draw this sheep, you could add many more to make a herd of them. This could be done by following the guide again and then changing a few of the smaller details.

How big do you think you would like to make the sheep herd if you were to do this?

If you would like to populate this sheep drawing with other kinds of animals, you could certainly do that! You could even stick to farm animals and still have many to choose from.

You could have animals like goats, horses and pigs to name a few. They could all be drawn in a similar style to this sheep as well to make the picture look more consistent.

What other animals could you add to this charming drawing?

Next, you may want to add a background to really make this scene look more complete. Once again, you would have many options to choose from if you were to do this.

You could make it a farmhouse setting, or you could make the scene set out in a field. That is just a small selection of ideas, but there are so many more you could go for!

Do you have some ideas for backgrounds you could use for this image?

Finally, you could use some fun arts and crafts to make your sheep sketch even more fun. One idea that could be fun would be to use cotton wool.

You could use a large lump of cotton wool and then stick it over the body of the sheep. That would make it look like it is actually wooly and fluffy.

That’s one idea for an interesting way to elevate your artwork, but there are many more you could try as well!

Your Sheep Drawing is Complete!

We hope you enjoy this step-by-step sheep drawing tutorial.

If you had fun drawing a sheep, then we think you might also be interested in learning how to draw a horse, goat, and any other farm animal.

Head over to our “How to Draw” catalog to check out many more enjoyable drawing tutorials like this.

As soon as you finish drawing and coloring a sheep, don’t forget to show off your masterpiece! Take a photo of your artwork and share it on various social media platforms, like Facebook and Pinterest.

Come on, don’t be embarrassed! You’ve worked hard for it, so it’s definitely worth sharing. We’re sure it looks impressive! 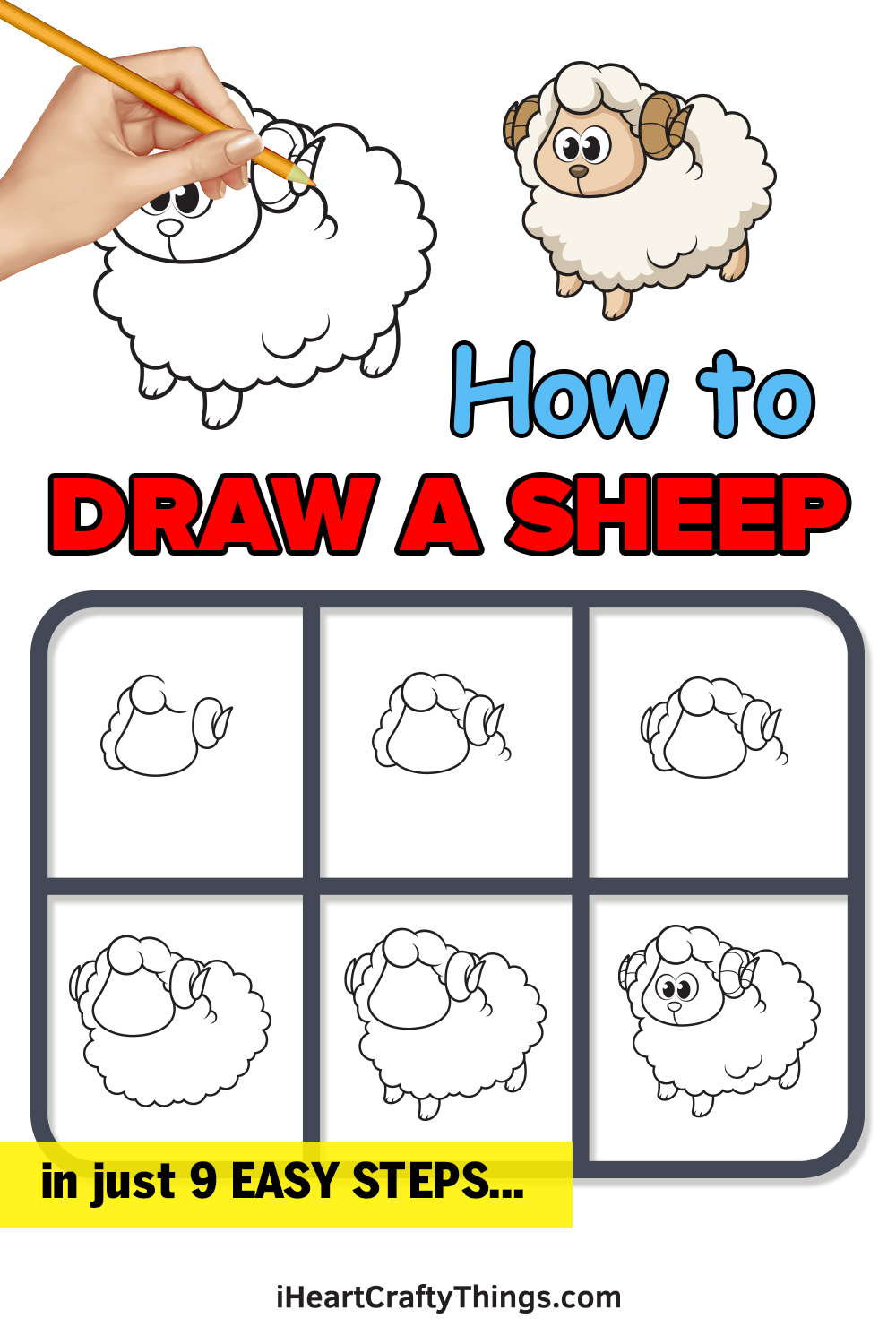 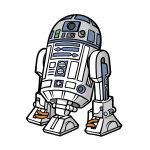 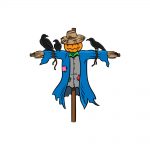