Undertale is one of the most unique and popular video games ever made.

Made almost entirely by one person, this game combines strange mechanics, a pared-back art style, an interesting story and unique characters to create an unforgettable experience!

Perhaps the most recognizable character from the game is the lazy skeleton Sans, who aids or opposes the player depending on their actions.

Fans of the game love to dress up as or create artworks featuring this lovable skeleton, and learning how to draw Sans can be very helpful for this goal!

Fans of the game and character will certainly get a kick out of the guide you have before you.

Our step-by-step guide on how to draw Sans in 6 steps will show you how to create an awesome image of this famous character! 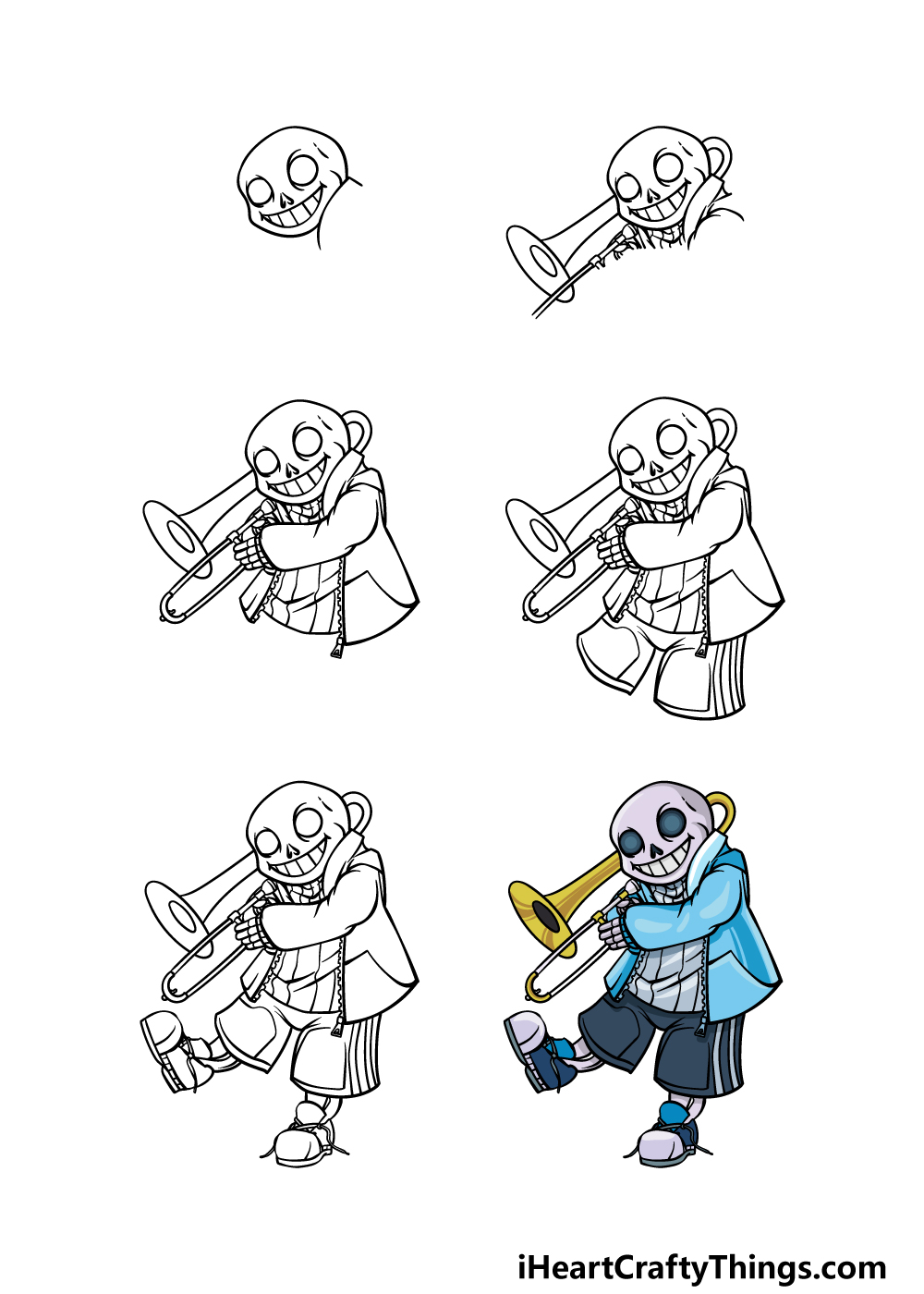 How to Draw Sans – Let’s Get Started! 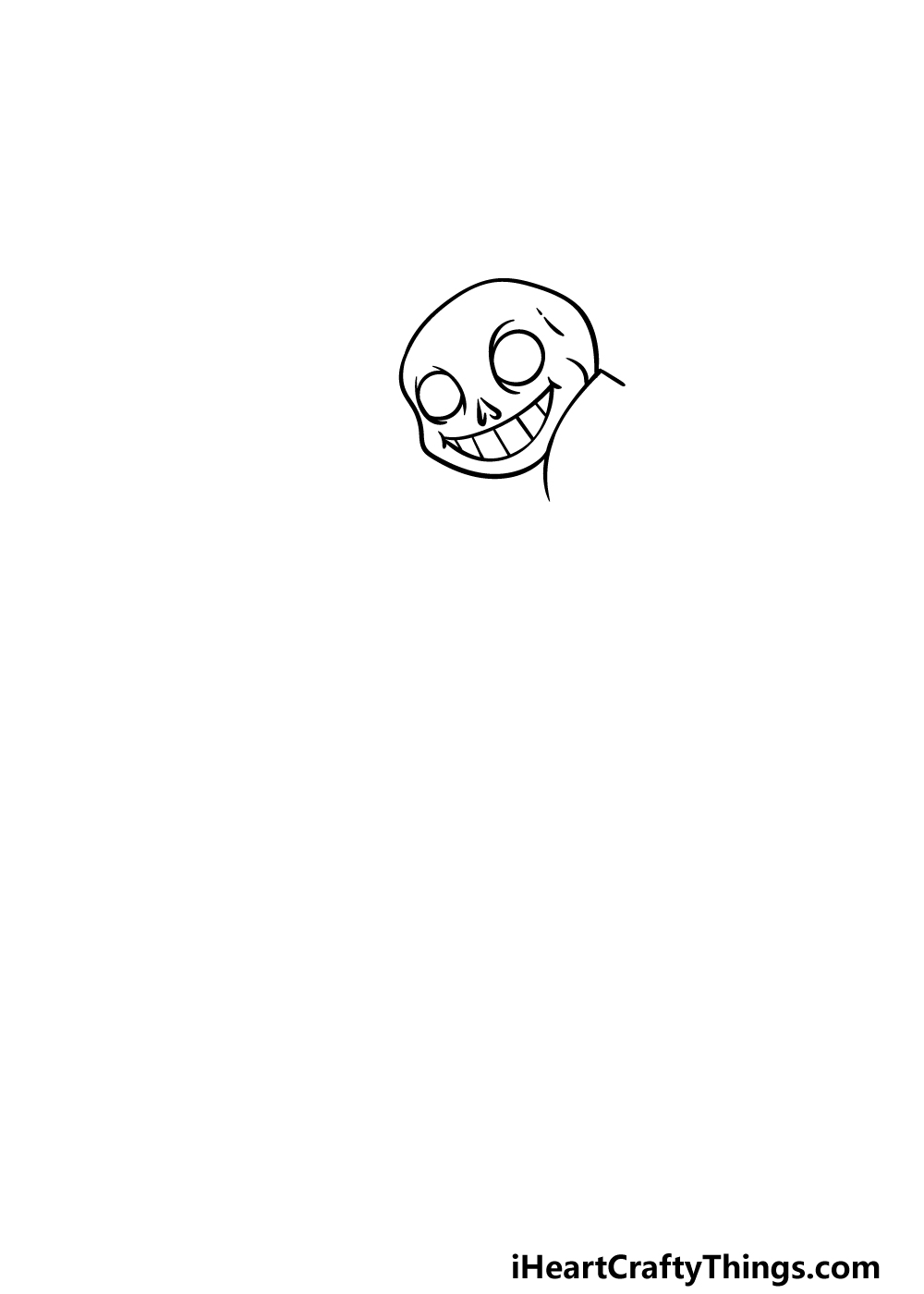 In the video game, Sans usually has a very small amount of detail to his look as he is meant to fit the art style of looking like a much older game.

For this guide on how to draw Sans, we will be drawing a much more detailed, cartoony version of Sans with his signature trumpet!

To do this, we will be starting with his head in this first step. You can begin this by using two circles for his eyes. They will also have some lines coming off of them for extra detail.

Then, you can draw two small curved lines for his nose. Next, we will draw his characteristic grinning mouth. Use a curved line for the top of it and then add another one beneath it.

Then, draw some straight lines inside of it for his teeth.

Finally, we will be drawing his head outline. Use a curved line for the top of his head and then a larger one for the base. You can also draw the start of his collar before moving on to step 2.

Step 2 – Next, start drawing his trumpet and the start of his body 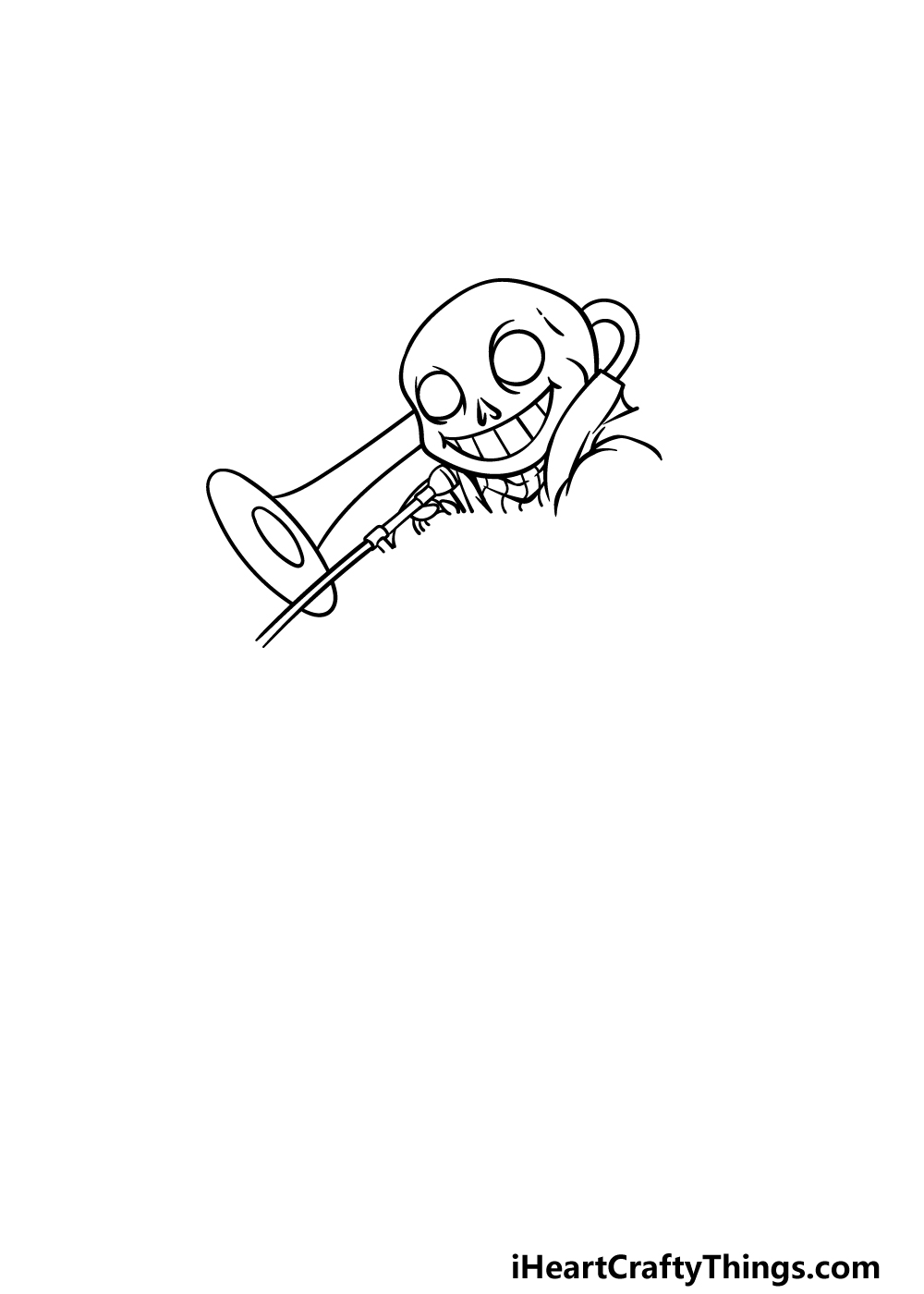 Sans is sometimes seen playing a song on his trumpet in the video game, and that is why we will start drawing one for your Sans drawing now.

Then, use some straighter lines beneath this section of the trumpet for the lower apparatus. You can also start drawing the top of his body and jacket before we proceed.

Step 3 – Draw his arm and jacket 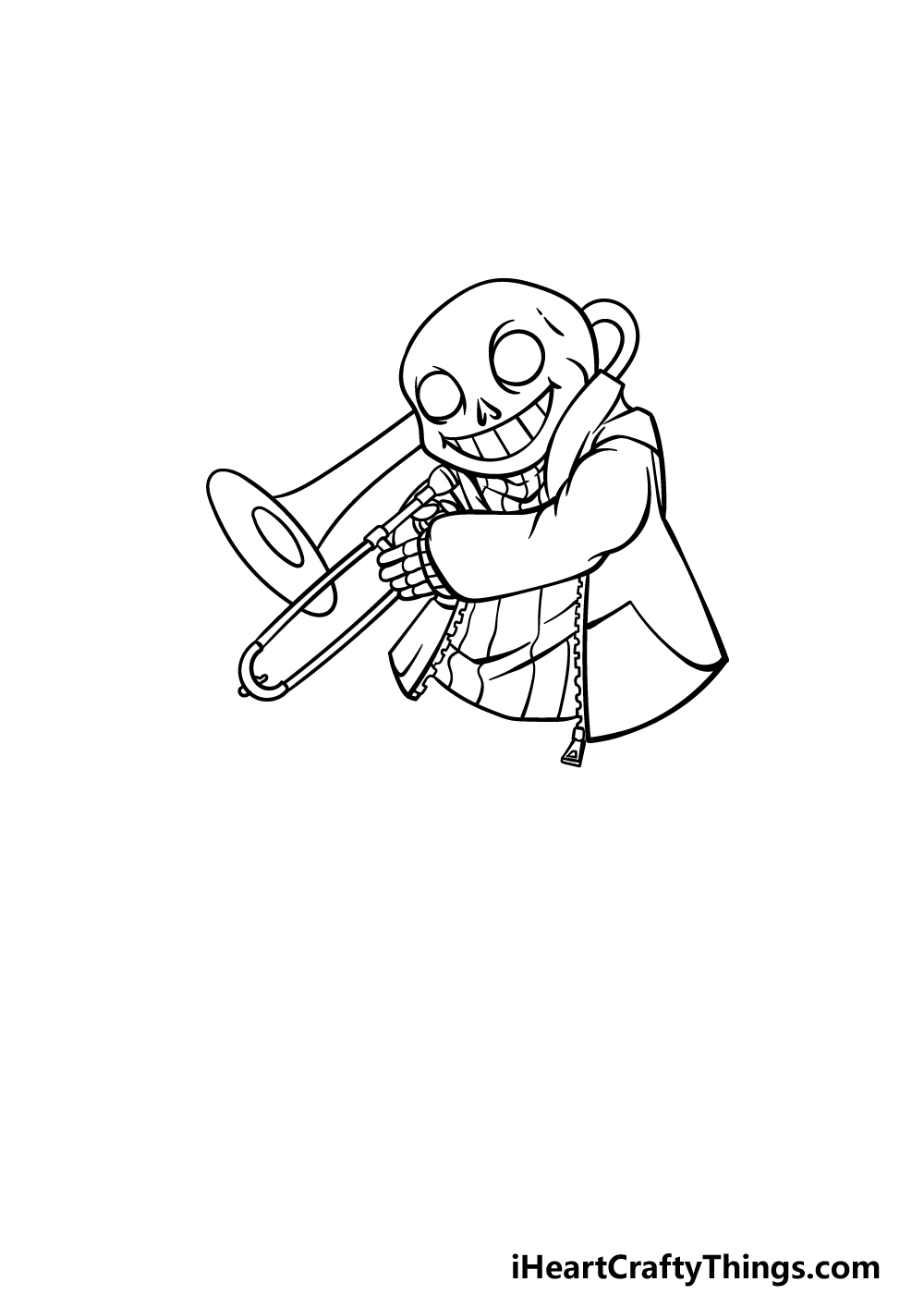 For this third step of our guide on how to draw Sans, we will be drawing his arm and jacket. Use some more curvy and bumpy lines to create the sleeve of his jacket beneath his collar.

At the end of this sleeve, we will add some long, thin shapes with lines in them for his bony fingers. You can then finish off the section of the trumpet that he is holding.

Before this step is finished, you can also draw his jacket and shirt as they appear in the reference image. Don’t forget to add some jagged lines for his zip on each side of the opening for his jacket!

Step 4 – Now, draw the pants that he is wearing 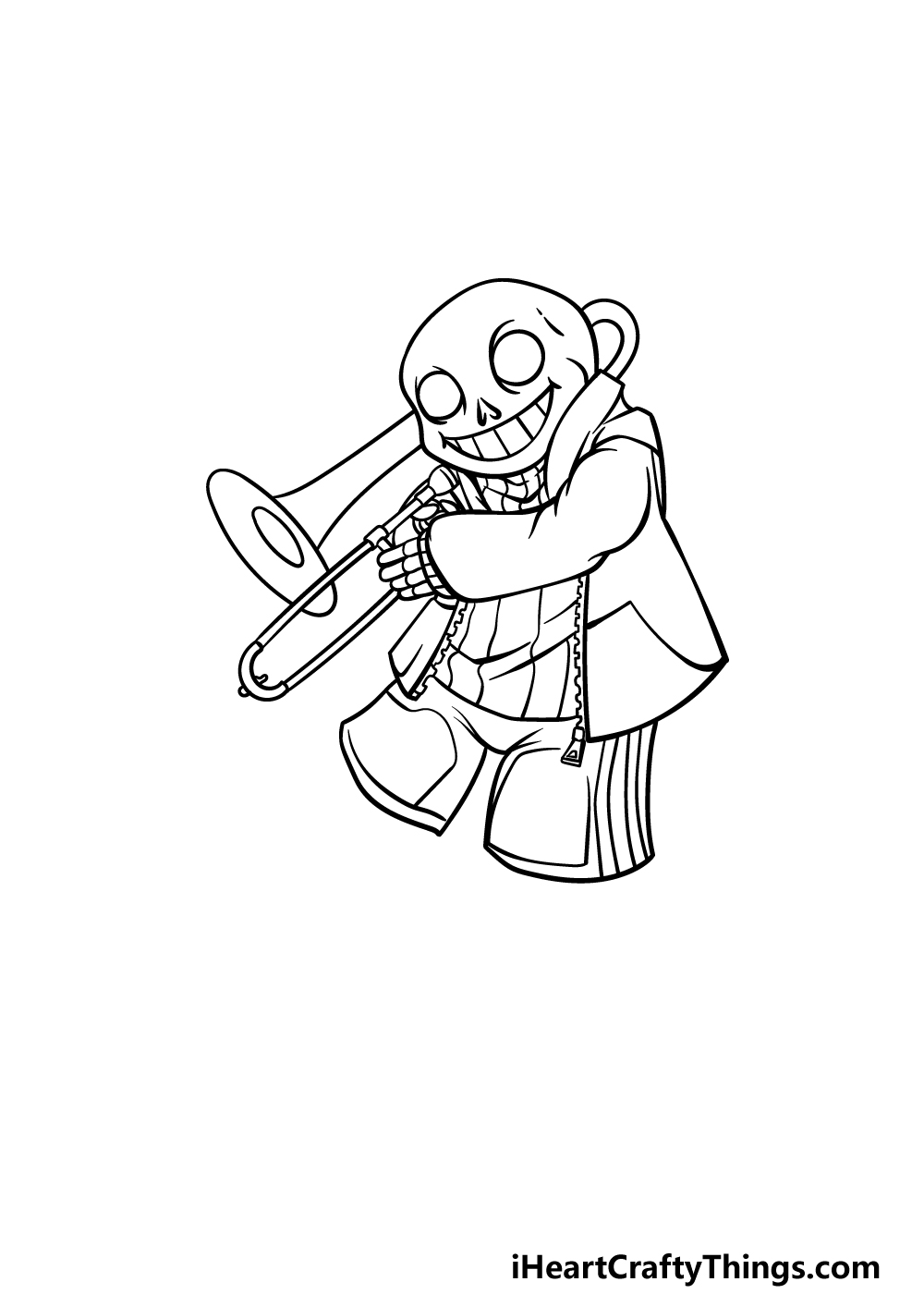 Next for your Sans drawing, we will be drawing the shorts that he is wearing.

Use some slightly curved lines for the outline of these shorts, and have it so that the leg on the left is raised higher than the right. This will show that he is marching along when we add his legs later.

Then, add some line detailing to the sides and front of his shorts, and then we will be ready to add the final elements in the next step.

Step 5 – Finish off your Sans drawing by adding his legs

For the final details of this guide on how to draw Sans, we will add some legs and feet for him before you color him in. use some short curved lines for his thin legs to start off with.

Then we will be drawing his shoes, and these could get a bit tricky! As shown in the reference image, they are separated into several sections of detailing using some curved and rounded lines. We will also add some finer details such as his swinging laces.

Once you have finished the legs and shoes, you are ready for the final step! You could also add some final touches before you proceed though!

These touches could be a background from your favorite scene in the game or maybe more characters that would go well with Sans. what final details will you use to finish it off?

Step 6 – Finish off your Sans drawing with some color 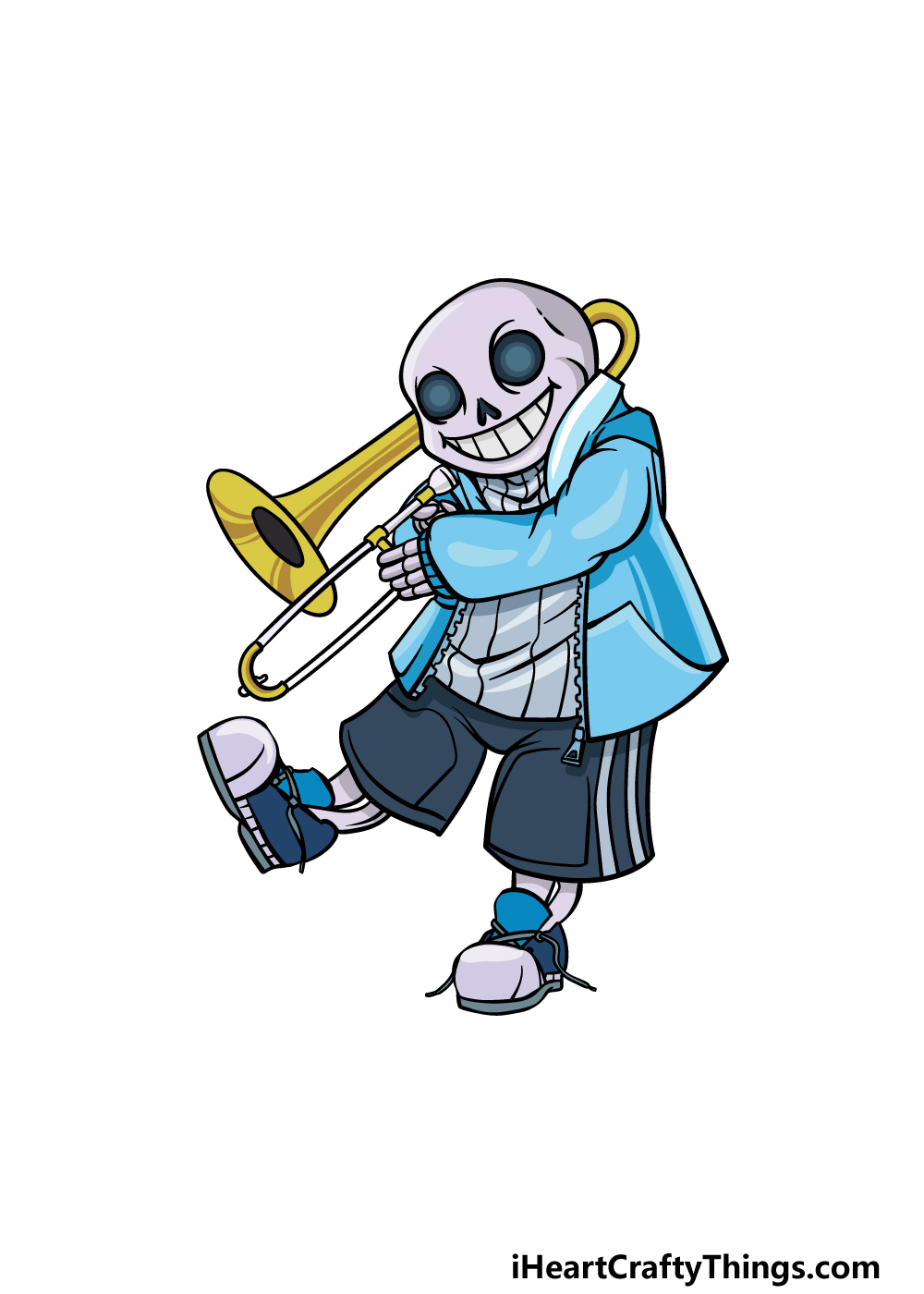 Now that you have arrived at the final step of your Sans drawing, you will be ready to finish it off with some color.

We went with his typical color scheme in our example image, and that means a lot of lighter blues and greys both for his clothing and his bones.

We also used some nice yellows for his trumpet to balance off the cooler colors! Will you use a similar color scheme for your own drawing or will change up the colors to other ones you love?

We can’t wait to see what colors and mediums you decide on!

Bring this character to life with these 4 tips for your awesome Sans sketch!

This drawing of Sans that we created in this guide is drawn in a really detailed cartoon style. This looks great, but players of Undertale will know that there are a few different art styles used in the game.

You could change the design of this picture to look like other styles he has in the game! Or, you could create a brand new art style to depict Sans in if you’re feeling extra creative.

Will you try to make him look like he does in the game or go for something else?

This picture of Sans shows him marching while playing a trumpet. It is a really fun pose, but you could also change it up a bit. This could be as simple as removing the trumpet to make it look like he is simply marching.

Or, you could take inspiration from the game and draw him holding another object he could be interacting with. What other objects could he be holding?

Another awesome way to make this Sans drawing even more unique would be by adding a background. The background could be quite simple, and this would emulate some of the simple backgrounds from the game.

Or, you may want to go for a more detailed and realized background setting if you stuck to the detailed design we worked on in our guide.

Would you like to create a background from the games or go with something unique?

Finally, it would be great to add more characters from Undertale to go alongside this Sans sketch. The game is famous for its many quirky and creative characters, so you would have many to choose from.

Using a character from the game is just one way you can populate this artwork. If you wanted to, you could create a brand new character that would fit right into the Undertale world.

What style of drawing would you use for some additional characters to finish this off?

Your Sans Drawing is Complete!

All six steps of this guide on how to draw Sans have been completed, and that means that you have an awesome picture of this beloved character in front of you!

As we mentioned earlier, we added a lot more detail than he would typically appear with in the game, so we hope that this guide made it fun and easy for you to tackle this image!

Now you can show off how creative you can be by adding your own details, color choices and art mediums to finish it off!

We have more drawing guides featuring more video game characters, fun objects and characters from movies among many more subjects on our website. We have many more coming soon, so be sure to keep checking in!

Once you have finished the final touches and colors for your Sans drawing, we hope to see it! You can show us by sharing it on our Facebook and Pinterest pages for us to admire. 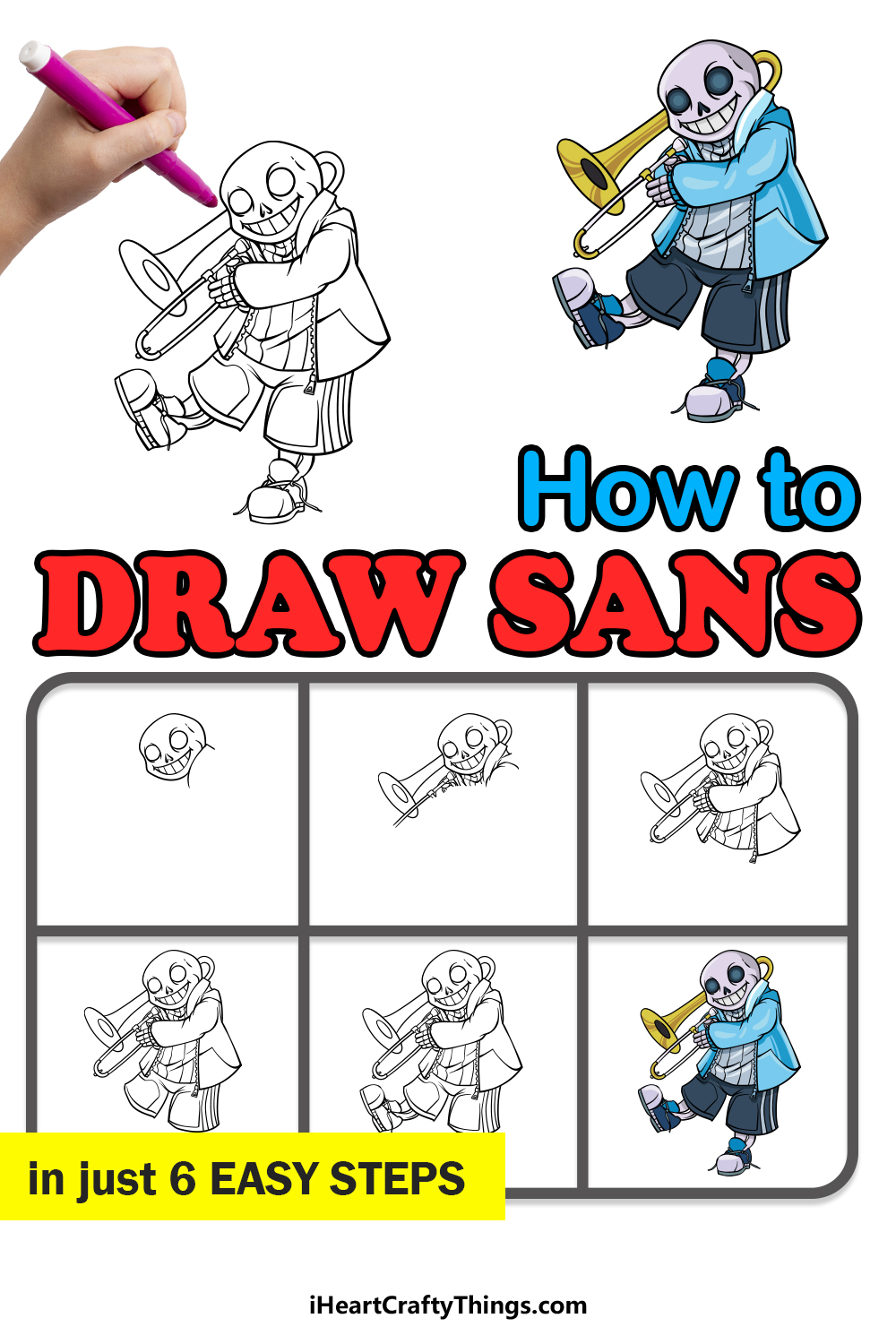 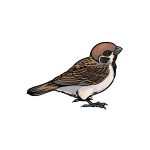 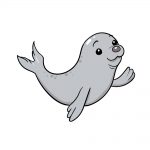