The Harry Potter series is a relatively new edition to the history of classic, beloved children’s book series, but it is arguably the most popular of the modern age.

This series of books has been adapted to enormously successful films and other media, and it is enjoyed by fans young and old.

One of the most popular characters is one of Harry’s best friends, the intelligent and resourceful Hermione Granger.

She is a character many love and identify with, and learning how to draw Hermione Granger is a great way for them to show their love for the character.

This tutorial will be perfect for any fans of this wonderful character!

So get ready for some magical drawing fun as we delve into this step-by-step guide on how to draw Hermione Granger in 6 steps! 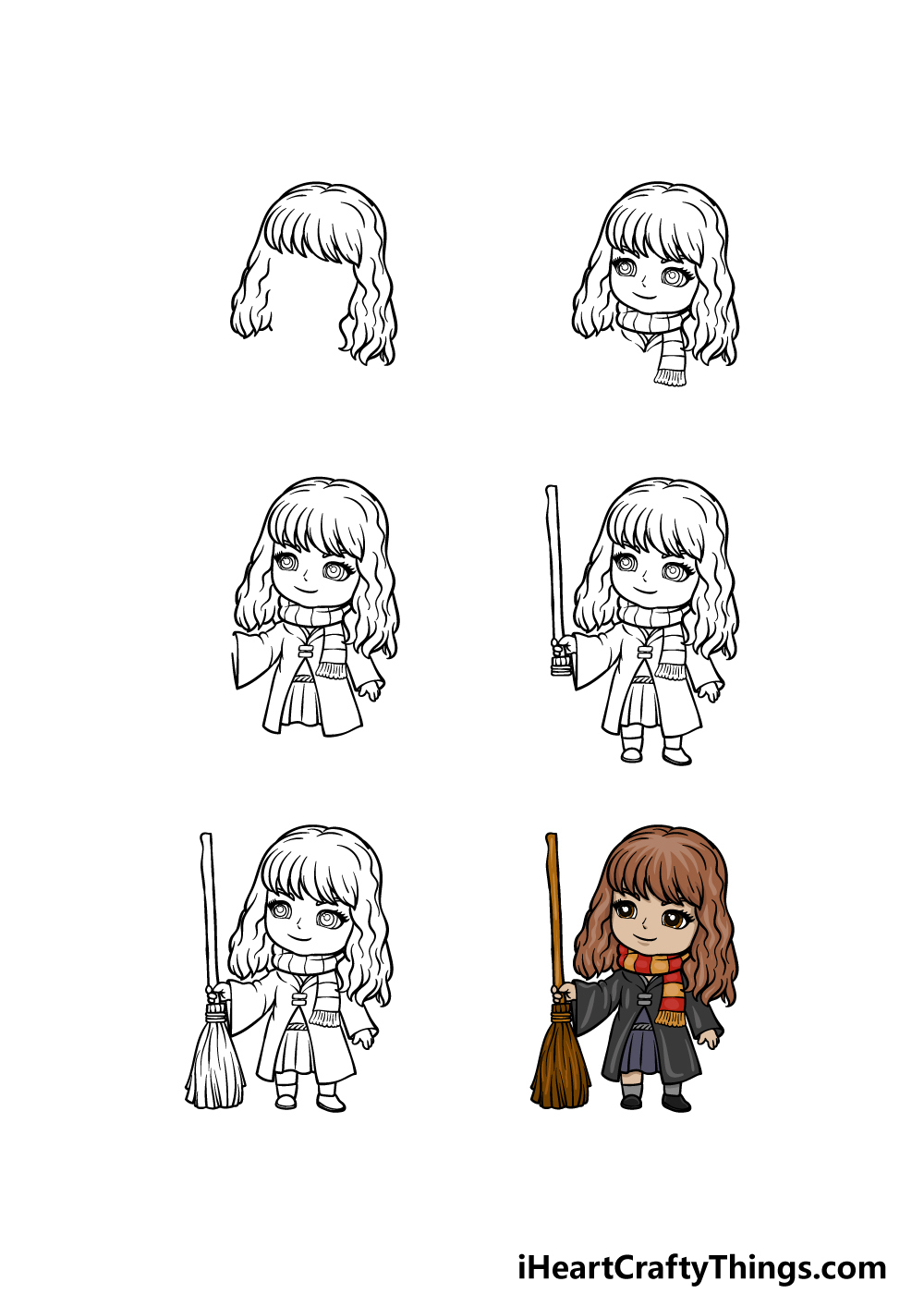 How to Draw Hermione Granger – Let’s Get Started!

One of the defining visual features of this character would have to be her big, bushy hair. This is what we shall be starting with in this first step of our guide on how to draw Hermione Granger.

First, we will be drawing her fringe over her forehead. This fringe will be drawn using some curved lines that eng in pointy tips.

The top of her head will be drawn with some curved lines connecting to one another, and then we can draw the sides of her hairstyle.

For the sides, we will be using some wavy lines dropping down to end in some pointy tips. This will help to give the hair some more volume and texture.

With the hairstyle drawn, we can continue to step 2!

Step 2 – Now, draw her facial details and her scarf

The style we will be using for this Hermione Granger drawing will be cute and cartoony, as you will see in our examples!

For now, we will be drawing her facial details. First, use some curved lines for her facial outline.

Then, draw some large, rounded shapes for her eyes and then add some pointy lines extending off of them for her eyelashes. Finish off with some circular shapes inside the eye outlines for her pupils.

We will then use some simple lines for her nose, mouth and eyebrows. Finish off by drawing her striped scarf around her neck, and then it’s time for step 3!

Step 3 – Draw the robe that she is wearing 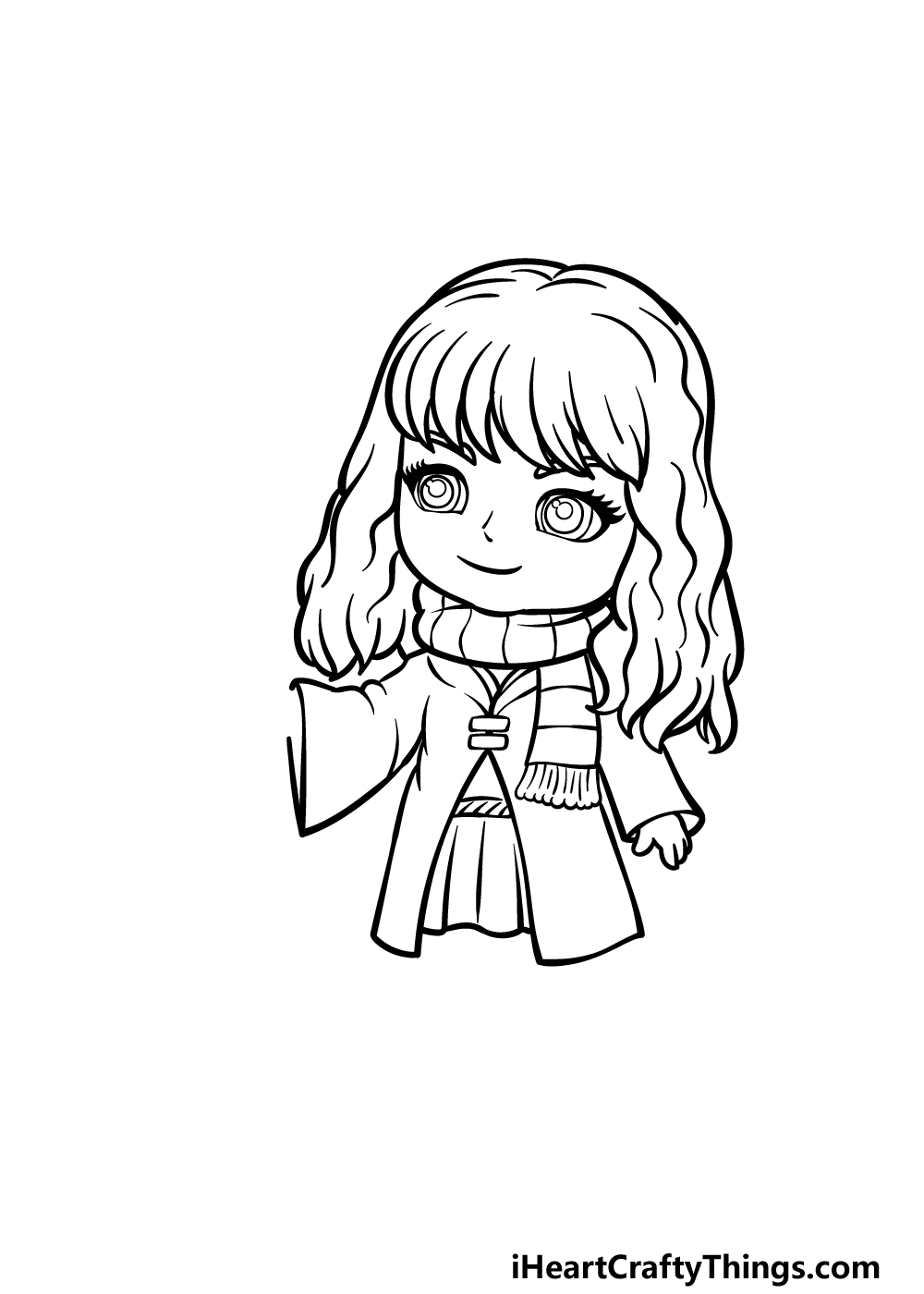 In the Harry Potter series, students of the magical school Hogwarts will wear robes as part of their school uniform.

This is what we shall be drawing in this step of our guide on how to draw Hermione Granger.

Use some curving lines to draw the sleeves of her robe, and these sleeves will be thinner at the base while getting wider towards the ends of the sleeves.

The front of the robe will be connected near the top with some straps, and then it will split and part.

Before you move to step 4, you can also draw her skirt showing behind the split of the robe, and then we can proceed.

Step 4 – Next, draw her broomstick and legs

Broomsticks are a popular accessory in the Harry Potter universe.

Instead of being used for cleaning, they are used to zip around through the air and are even used in the popular game Quidditch.

We will be showing her holding one of these broomsticks in this part of your Hermione Granger drawing.

The final thing to add in this step will be her legs. To fit the style we’re going for, these legs will be short and squat with small feet at the end.

Then you will be ready for some final details and elements in the next step of the guide!

Step 5 – Add the final details to your Hermione Granger drawing

This fifth step of our guide on how to draw Hermione Granger will have you adding the bristly end of the broomstick that you began in the previous step.

The more of these that you can add the better, as it will help to create the look of individual bristles.

With the broomstick finished, you can then move on to the finals step! Before you do this, you could also add some extra details of your own!

One idea would be to draw a background, as this would be a great way to show off your favorite Harry Potter scene or moment! How will you finish off this awesome picture?

Step 6 – Finish off your Hermione Granger drawing with color 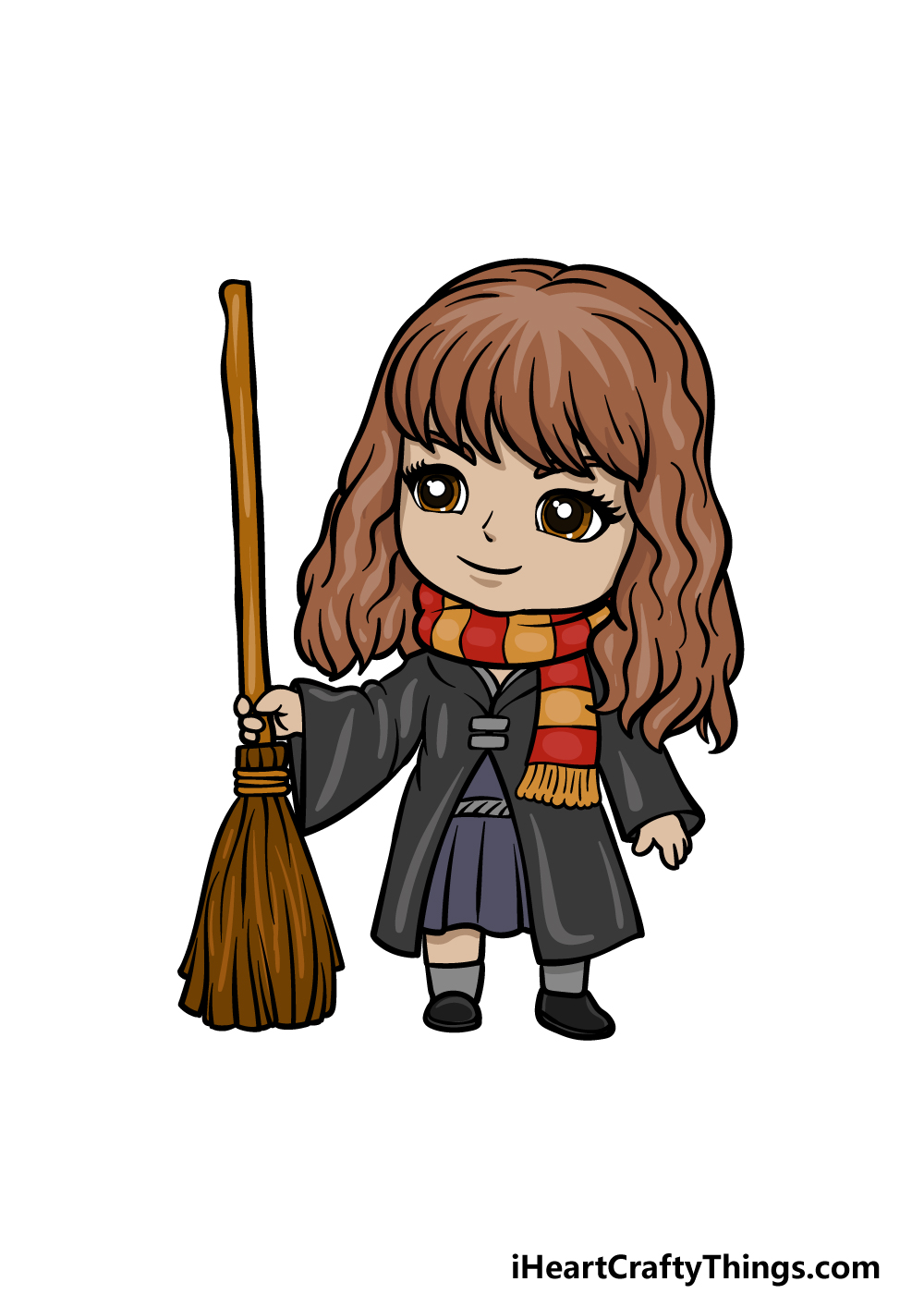 In our example image for this Hermione Granger drawing, we showed you the colors she is typically associated with in the books and the films.

This means that her hair is a rich darker brown, and then for her scarf we used alternating red and gold colors as they are the colors of her school house.

You could go for similar colors in your own rendition if you would like her to look accurate, but this is your drawing and you could create your own Hermione Granger interpretation by changing up the colors!

Will you go with her typical color scheme or change it up a bit?

Create some magic as we make this Hermione Granger sketch even better!

This Hermione Granger drawing shows her posed with one of the famous flying broomsticks from the series. There are many other props from the stories that she could be posed with instead!

One of the most obvious ones would be to give her a magic wand to hold. Or, she could hold a pile of books to highlight that she is a model student!

These are just a few ideas for alternative props for her to hold, but what else can you think of?

Objects are not the only things you could add to this drawing of Hermione Granger. Wizards and witches in the series will usually have an animal, and Hermione is no different.

In the books, she is joined by her orange cat, Cruikshanks. You could add this cat or maybe draw an owl instead.

There are loads of animals from the stories that you could add, so what animals could you add to this one?

In the books and movies, Hermione is almost always joined by her best friends Harry and Ron. they would make great additions to this Hermione Granger sketch that you have been working on!

If you were to add them, you could draw them in a similar style to how Hermione is portrayed. Of course, you could also add any other characters you like from the series.

They don’t have to be good guys, and you could even add the sinister Lord Voldemort if you wished!

There are also so many iconic locations in the Harry Potter series. Some of these locations would make brilliant backgrounds for this Hermione Granger drawing!

You’re spoiled for choice just with the rooms in Hogwarts alone. You can also move away from the castle and portray areas like Hogsmeade or Diagon Alley.

These are just a few of the locations you could choose for a background. You could maybe even take Hermione on a brand new adventure by creating a unique background!

Your Hermione Granger Drawing is Complete!

We hope that you had a magical time as you worked with us on this guide on how to draw Hermione Granger!

This is such a beloved character, and we loved creating this stylized representation for you to work on.

Now it’s up to you to finish up by adding your own awesome details, elements and additions! How will you complete your wonderful picture?

When you’re ready to take on a new drawing guide, you can find your next one on our website. There is a huge selection there and it’s growing all the time, so keep checking in to never miss out!

It would be amazing to see your completed Hermione Granger drawing as well, so please share your creation on our Facebook and Pinterest pages for us to see! 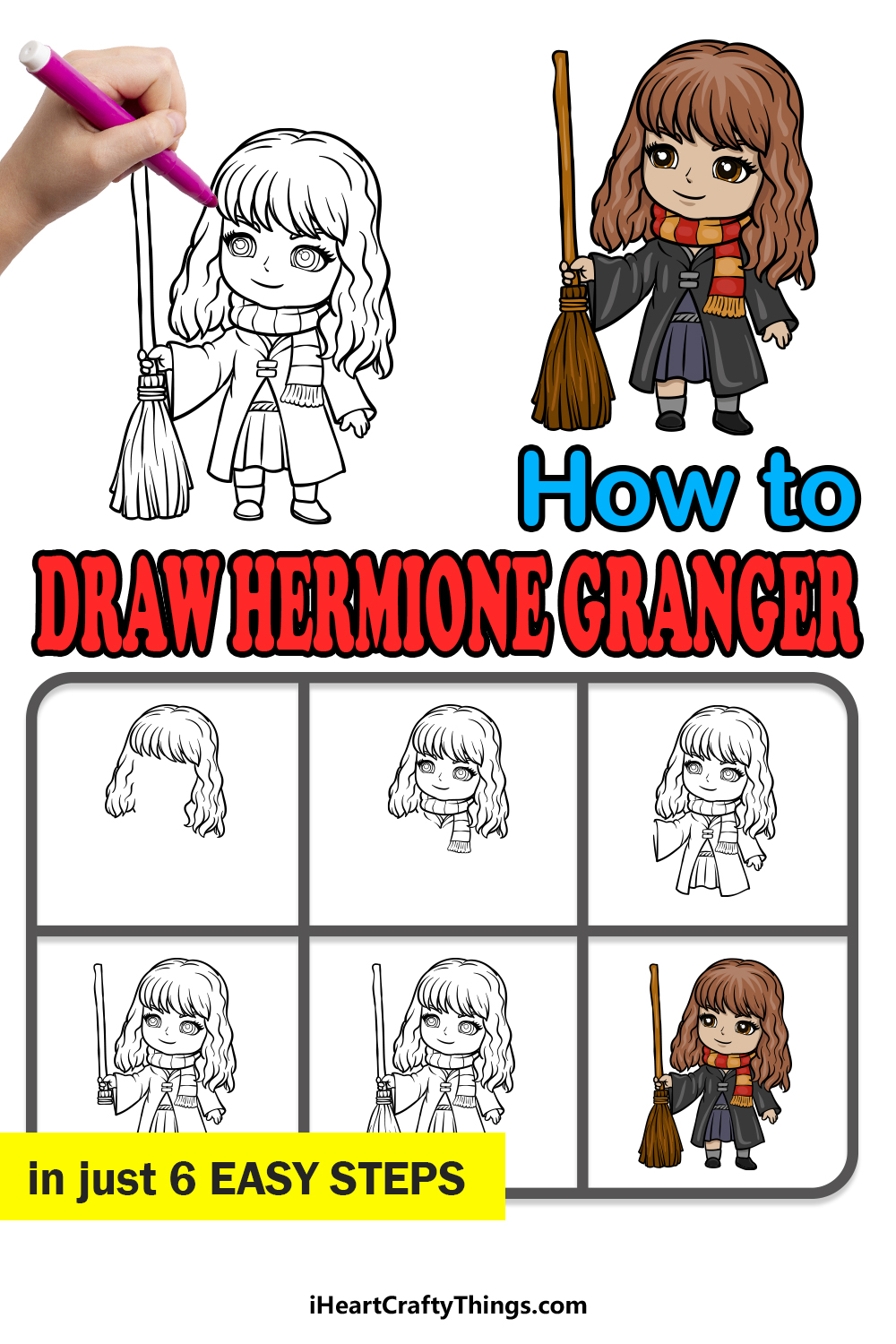 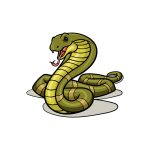