Literature is full of intimidating and terrifying monsters to scare readers around the world, and many of these literary monsters make it to other forms of media as well.

It would be hard to think of a creature as imposing as the cosmic entity Cthulhu.

Created by writer H.P. Lovecraft, Cthulhu has captured the imaginations of millions around the world and has influenced many other stories and artworks.

It can be hard to fully comprehend this beast, but it doesn’t have to be hard to learn how to draw Cthulhu!

If you’re a fan of this entity, then this will be a tutorial you’ll want to see all the way to the end.

This step-by-step guide on how to draw Cthulhu in just 6 easy steps will show you how you can recreate this famous and terrifying creation. 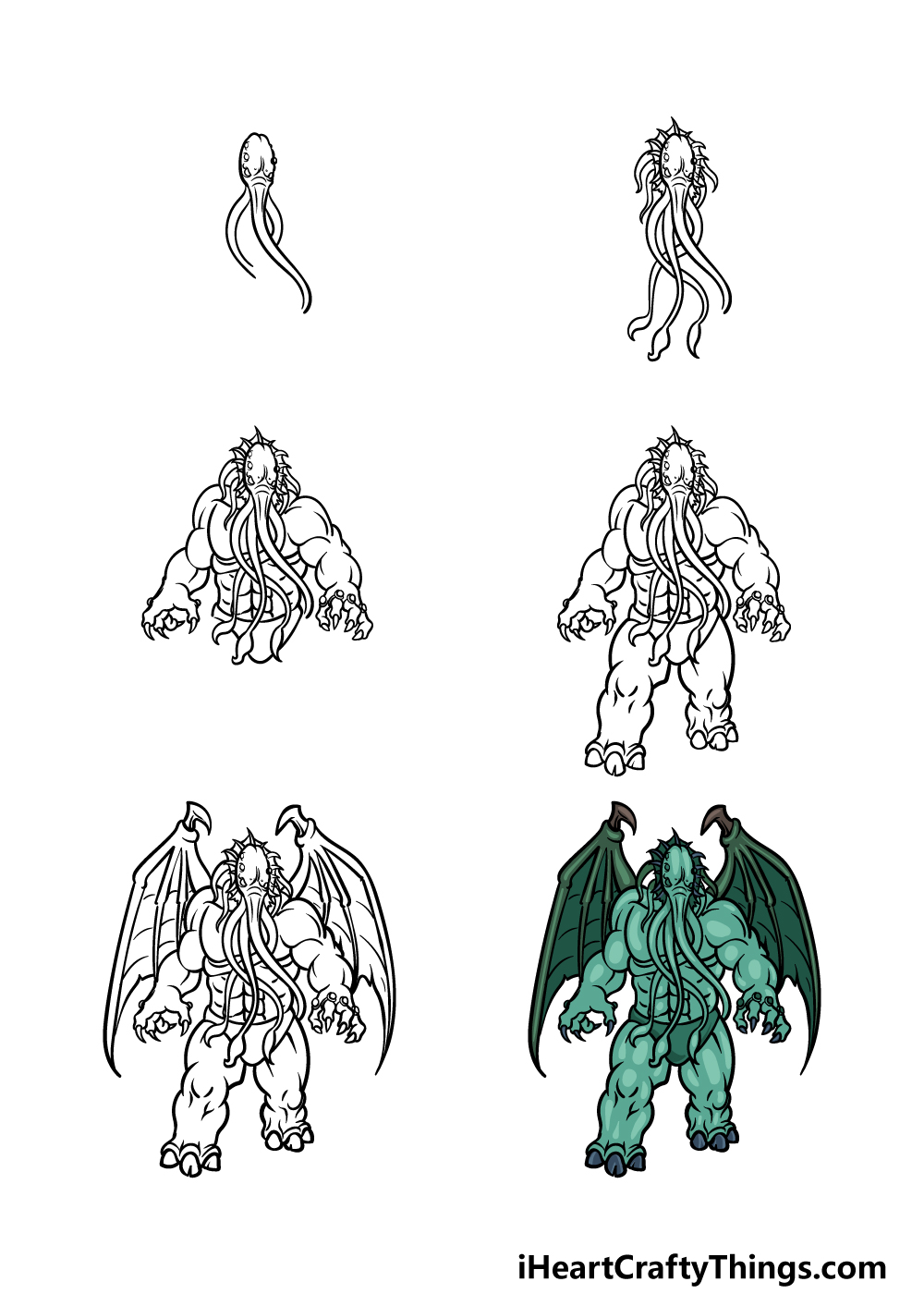 How to Draw Cthulhu – Let’s Get Started! 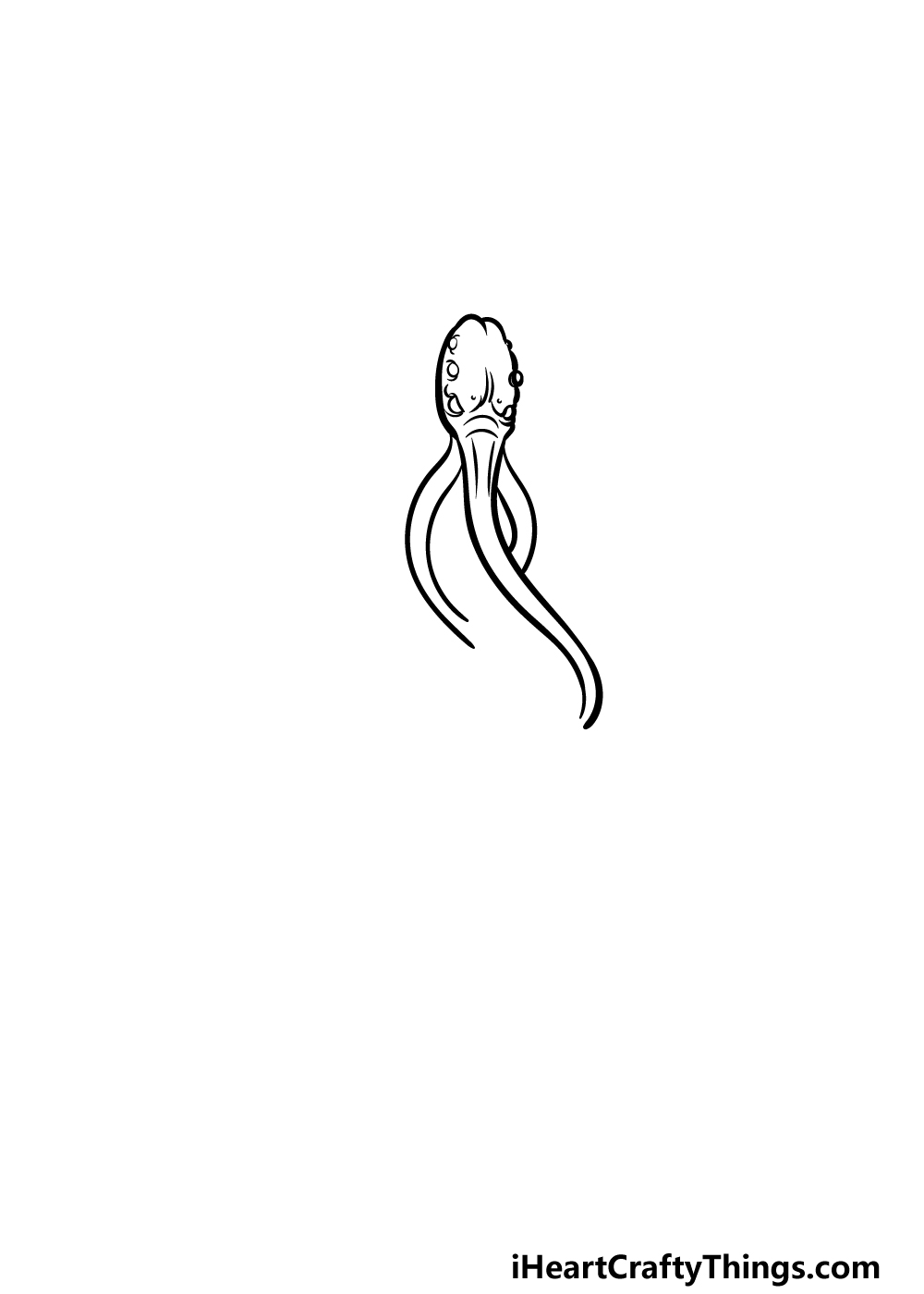 Cthulhu has had many designs in his various incarnations, but one thing that is generally rather consistent is that he has a squid-like face and head.

That is the element we will start with in this first step of our guide on how to draw Cthulhu. Use some rounded lines to draw the curved sides of the center of his head to begin.

There will also be a row of three blank eyes going up the sides of his head. Finally for this step, you can use some wavy lines to extend three tentacles dropping down from his head.

That’s all there is to it for now, so let’s continue to step 2.

Step 2 – Now, draw some more of his head 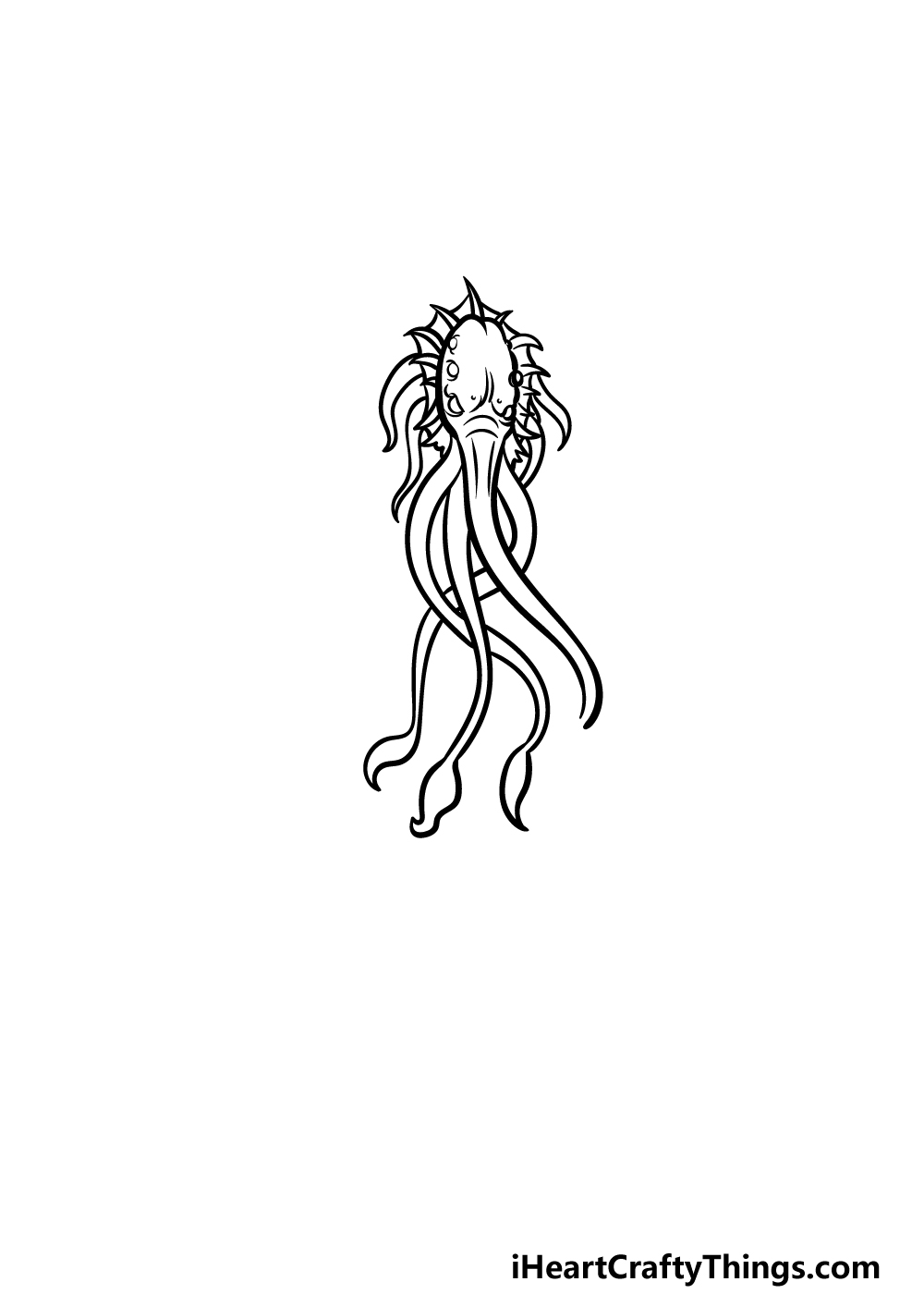 This second step of your Cthulhu drawing will see you adding some more to the face and head design of Cthulhu.

First, draw some small, sharp spikes coming off of the outline of his head that you drew, and then add some curved lines between them for some webbing.

Then, add some more curvy, thin shapes coming from the head for some more masses of tentacles.

The more tentacles you can fit onto a Cthulhu drawing the better! Then, we’re on to step 3 of the guide. 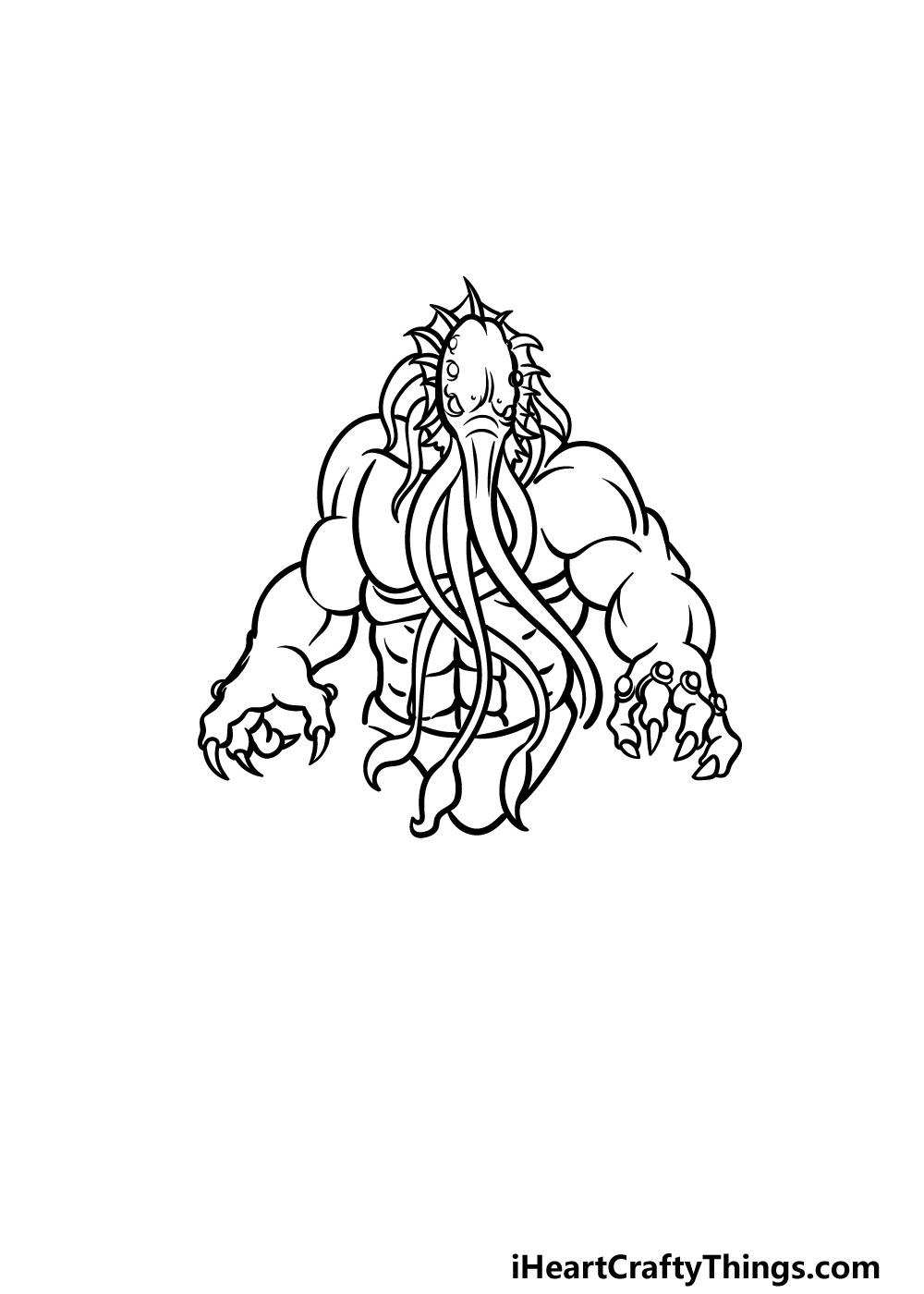 Now that you have the head and tentacles done, we can start to draw the arms and body in this step of our guide on how to draw Cthulhu.

In this design, we went with a muscular body form for Cthulhu, and you can draw his muscular arms by using some curved lines for the different sections of his thick arms.

Then, use some curved lines for his abdominal and chest muscles, and then finish off by drawing his hips. Once these aspects are done, we shall then be ready for step 4. 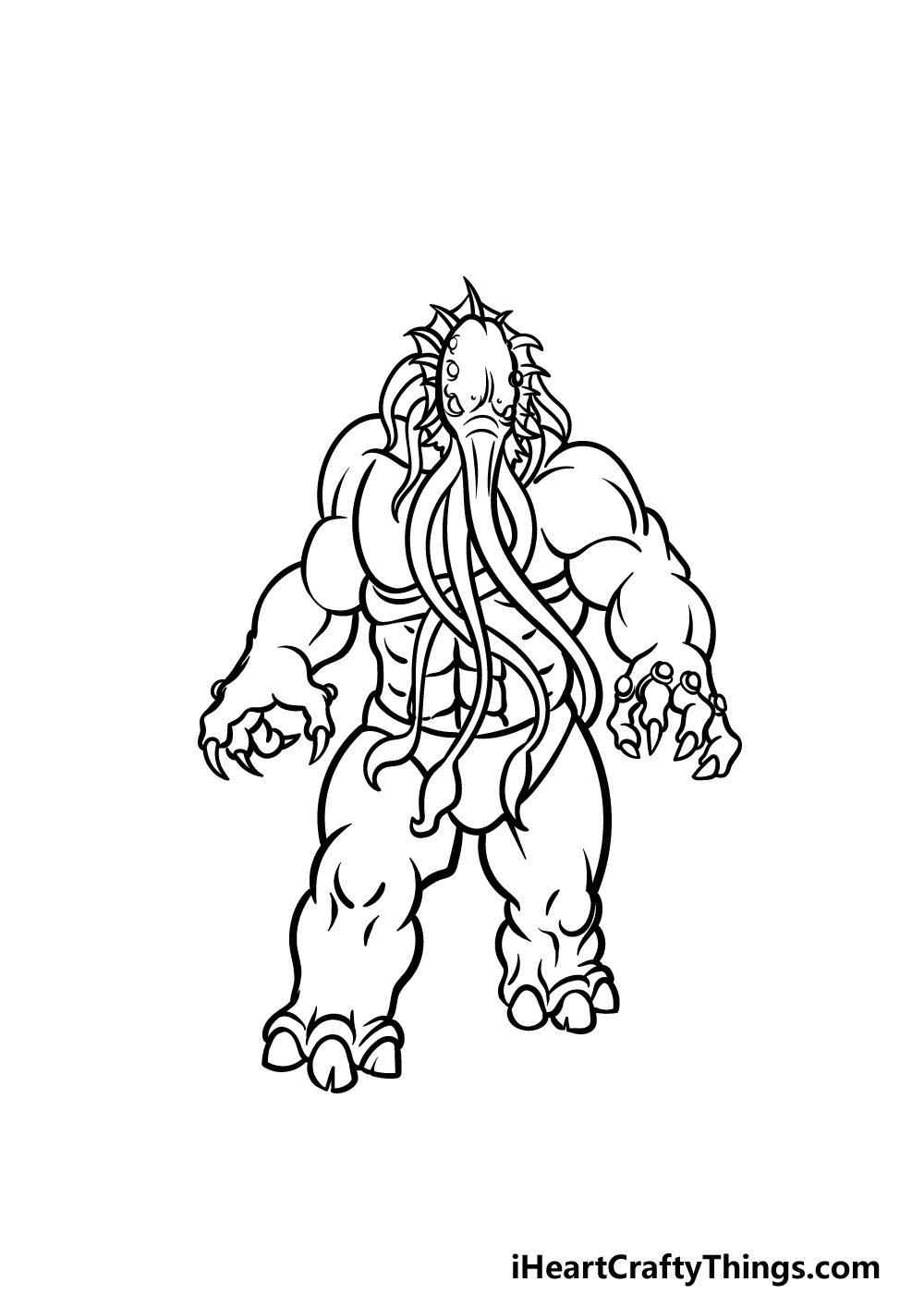 To continue this Cthulhu drawing, we will next be drawing his legs. Much like his arms and body, the legs will be quite thick and muscular.

The legs also have a vaguely elephant-like structure to them. Use some more curvy lines for the outlines of his legs, and try to position them so that the one on the left is extended a bit forward.

We will also be adding some smaller line details to the interior of the leg outlines for his knee details and other muscle structures.

His legs will also have some rough, rounded toenails that also look a bit like nails you would find on an elephant’s foot.

Step 5 – Add the final details to your Cthulhu drawing 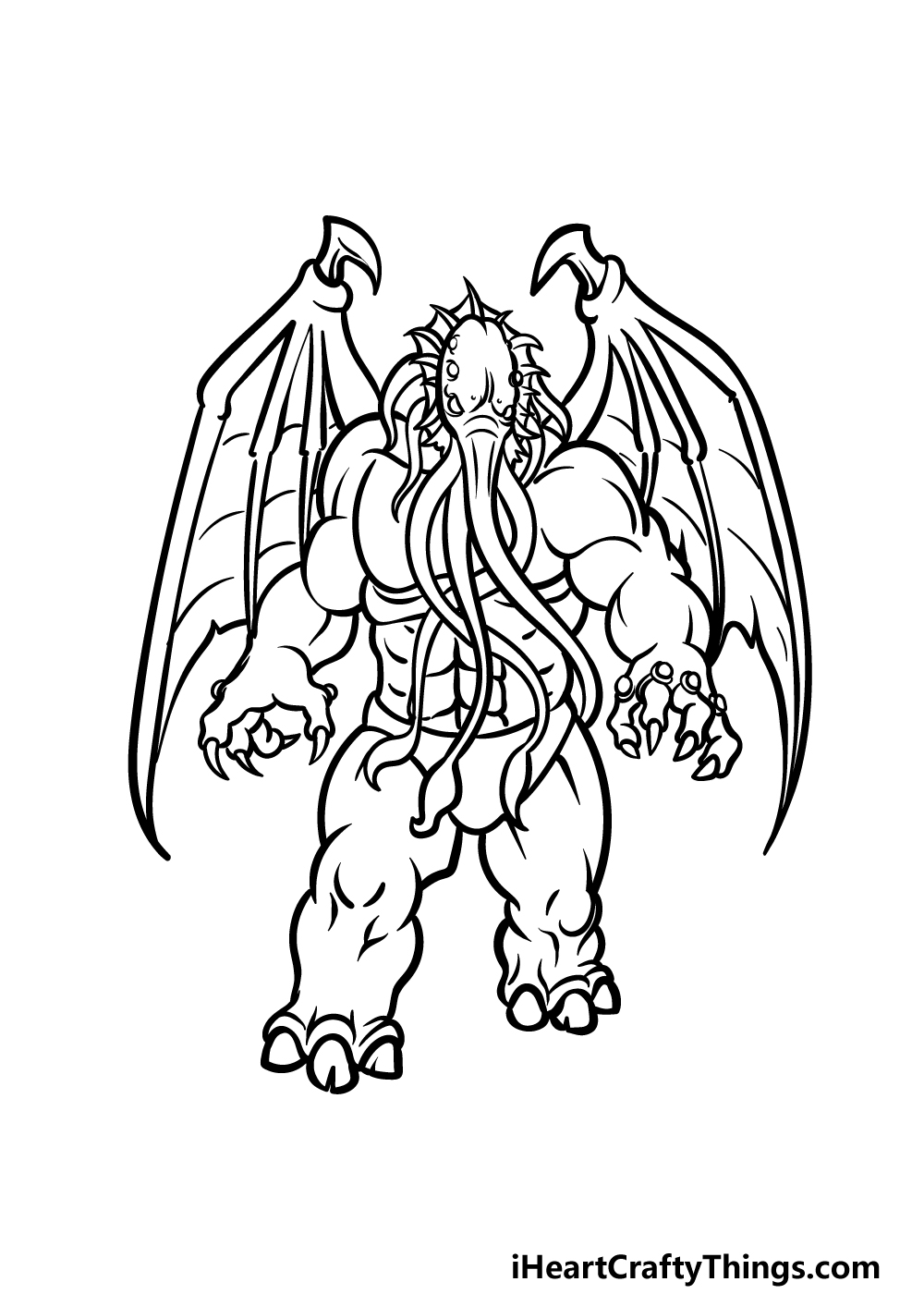 Another element that is common in Cthulhu designs is that he will have some large wings, and we will be adding some of these before the final step of this guide on how to draw Cthulhu.

The wings in this design are a bit of a combination between a bat’s wings and the wings of a gargoyle.

You can start them by using some curved lines for the bone structure of the wings. These will each have a section on top that has a claw poking off of them.

Then, use some curved lines for the webbing between the bone structures, and then add some line details to the webbed sections.

Once you have drawn these wings, you could also add some more details of your own! It could be fun to draw a background, and maybe you could show him looming over an unsuspecting city.

How will you finish off your awesome drawing?

Step 6 – Finish off your Cthulhu drawing with color

This is the final step of this Cthulhu drawing, and in it we shall finish off with some colors.

In our reference image, we highlighted the aquatic nature of this beast by using some green and blue shades for his body.

You could go for a similar color scheme for your own image, but you should also feel free to use any additional colors that you may prefer!

This is your drawing, so you can really go wild with the colors that you choose.

When you know the colors you would like for it, be sure to have some fun experimenting with various art tools and mediums as well.

We can’t wait to see how you finish off this image with your creative color choices!

5 Tips To Make Your Cthulhu Drawing Even Better!

Capture the terror of this ancient monster with these tips for your Cthulhu sketch!

In many stories, Cthulhu takes on lots of different forms depending on the interpretation. You could create some interpretations of your own beside this drawing of Cthulhu!

While depictions of Cthulhu take on many forms, they all have a similar octopus theme. This would be an opportunity to really use your imagination to create something horrifying.

Have you got some ideas for some creative Cthulhu interpretations?

Another way of making this drawing more horrifying would be by adding other monsters with him. These could be famous monsters such as Godzilla, for one idea.

Or, you could again flex your imagination and design some brand new horrifying monsters to accompany Cthulhu. It would be very interesting to see what creations you can come up with!

Cthulhu is usually depicted as being massive, and you could portray this in your Cthulhu drawing. One way would be to have him towering over a city for a truly epic portrayal.

Or, you could go for something smaller in scale and show him over a city street.

That would also allow you to draw some unfortunate human characters that were unlucky enough to find themselves in his path,

Drawing Cthulhu on land is one way of depicting him, but you could also put him in his natural habitat of the ocean. Even when sticking to this theme, you would have a few options.

One dramatic scene would be to show him emerging out of the ocean. Or, you could show him striding across the ocean floor, about to emerge.

Using background settings is one way of filling the space behind your Cthulhu sketch, but you could also go more abstract with it.

Cthulhu is often associated with nightmares and madness, so you could use some erratic lines, shapes and colors in the background to make it more chaotic.

This is something where you can really let go and let your creativity take over! How else could you fill the background?

Your Cthulhu Drawing is Complete!

That brings you to the end of this guide on how to draw Cthulhu!

As we mentioned in the intro, he is a rather terrifying creatin, but we aimed to make sure that this guide made the process anything but scary.

We wanted to keep the drawing nice and detailed, and as long as you follow all of the steps then you should have no problems achieving all of these great details.

Then, you can bring your own creative touches to the image when you’re done with the guide.

You can do this by creating a background or adding some details and color choices of your own. How else can you think to finish off the image?

Please be sure to visit our website when you’re finished with this drawing, as we have some incredible drawing guides waiting for you there. We upload new ones frequently, so you’ll want to check in often!

We would be thrilled to see your finished Cthulhu drawing, so please remember to share your creation on our Facebook and Pinterest pages for us to admire. 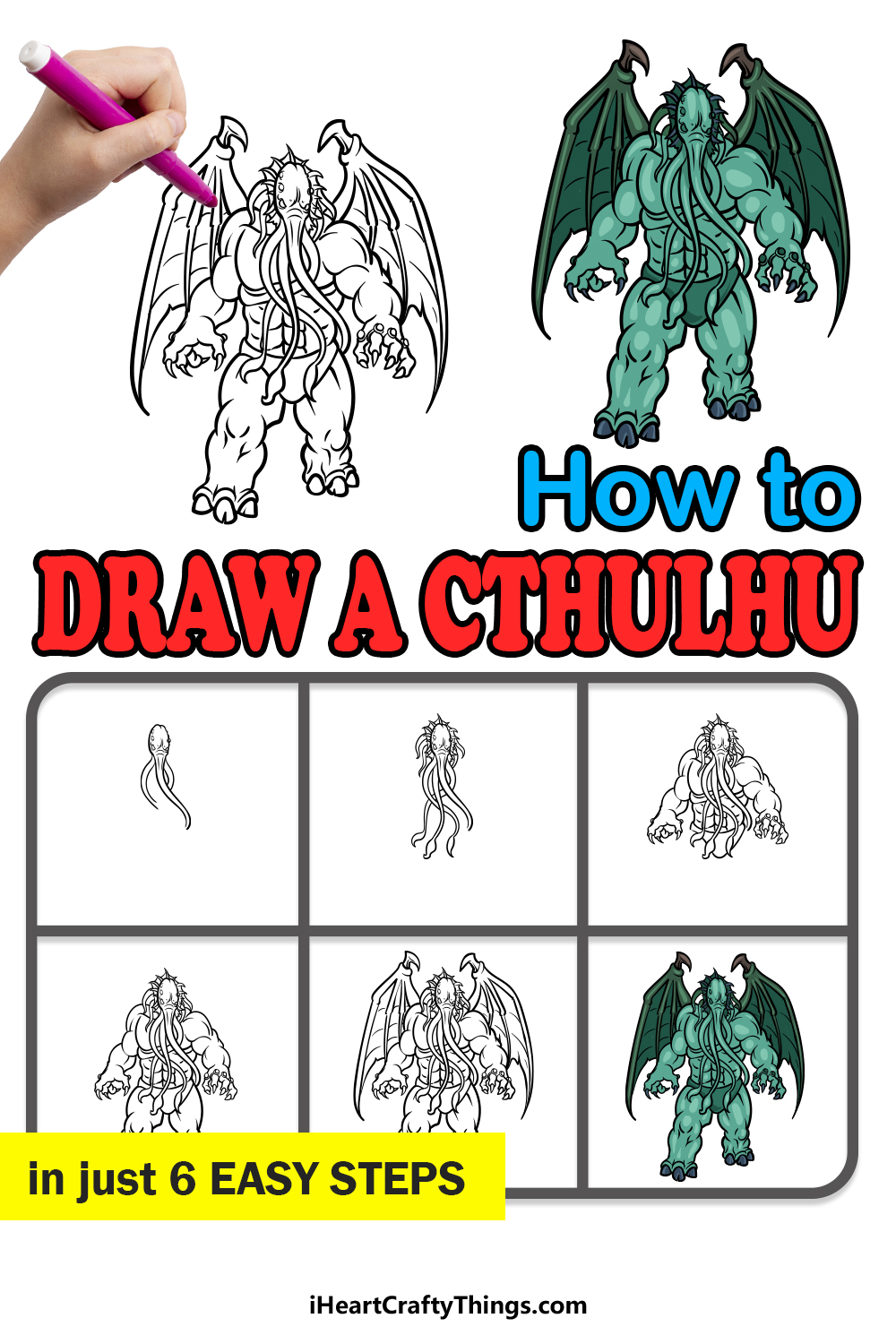 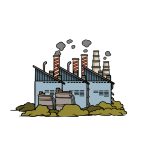