The crystal is a solid material that comprises atoms of the same element or atoms of different elements. The atoms in a crystal have a regular, repeating arrangement, thus creating its distinct patterns.

Crystals are a luxury nowadays and they don’t come cheap, especially the diamond, alexandrite, and other rare crystals.

Why not learn how to draw a crystal instead? With this, you’ll have a crystal right at your fingertips without having to spend a dime. 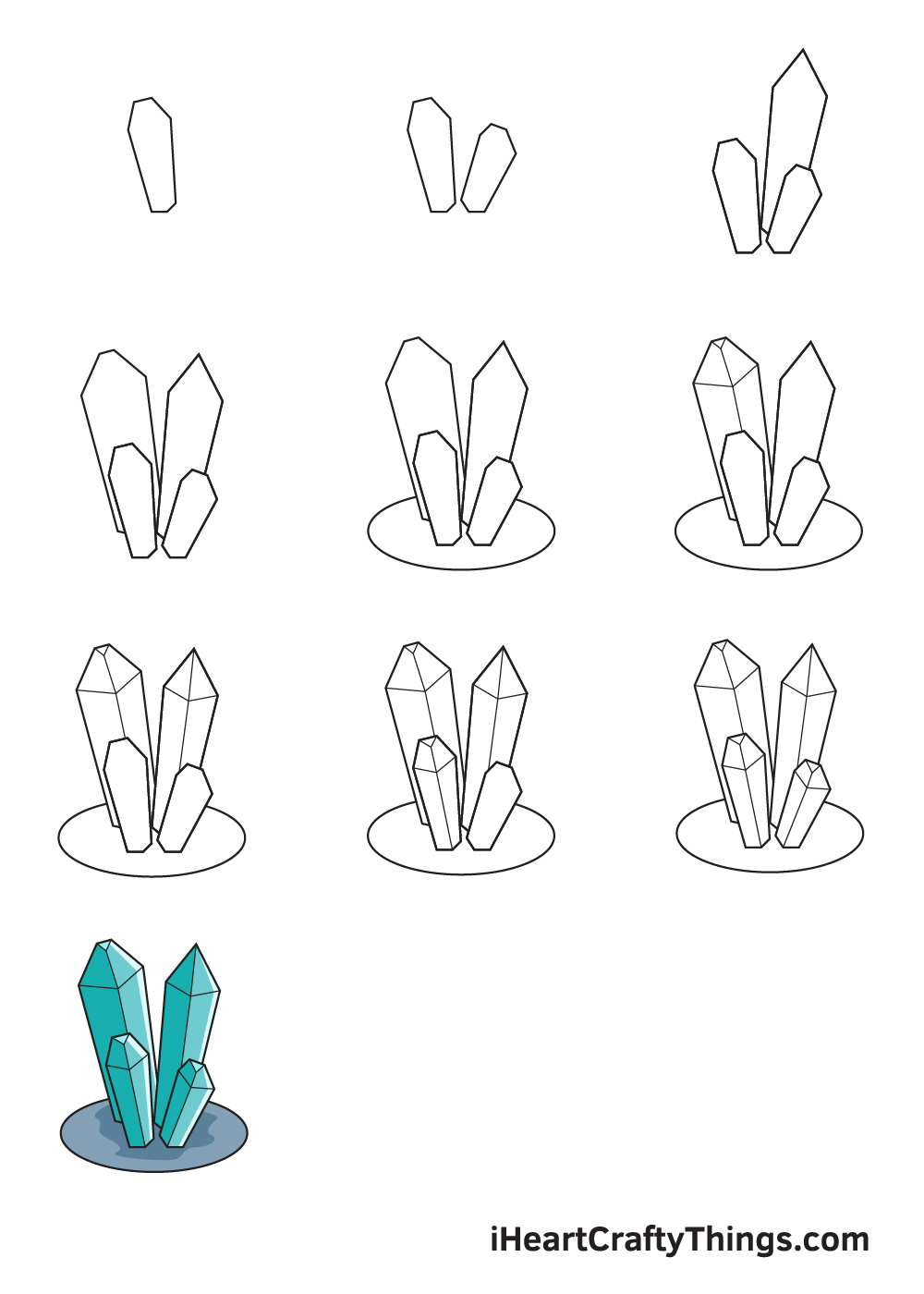 To make it a lot easier for you, we have created a step-by-step tutorial on how to draw crystals, summed up in 9 quick and easy steps.

What’s more, each instruction comes with an illustration to serve as your visual guide as you follow the steps one by one.

Have fun and use your creativity to draw a beautiful crystal!

How to Draw Crystals – Let’s get started!

Start by drawing the first crystal on the bottom portion of your paper.

Draw a horizontal line to form the topmost part of the crystal. Then, draw two diagonal lines heading outwards beginning from each endpoint of the horizontal line.

Afterwards, extend the lines by drawing two longer diagonal lines leaning towards each other. Now, draw a wide V-shaped line at the bottom to enclose the figure. At this point, the shape of the first crystal is finalized.

Step 2 – Create an Outline of the First Two Crystals

Draw another crystal with a similar form to the previous one. This time, however, this crystal should be a bit smaller than the first.

Keep in mind that the two crystals should be drawn side by side.

Continue by drawing an upside down V-shaped line to form the topmost part of the third crystal. Then, on each endpoint of the V-shaped line, draw a downward diagonal line leaning towards each other.

This creates the entire body of the crystal. Afterwards, finalize the outline of the crystal by drawing a line at the bottom, closing off the figure.

When drawn correctly, the figure of this crystal should look like an elongated pentagon shape.

Step 4 – Now, Draw the Outline of the Last Crystal

Draw a significantly bigger version of the first crystal we drew in the very first step. This forms the fourth—and the last—crystal in our drawing.

This crystal should be situated beside the one we drew in the previous step. Remember, this should be the biggest and tallest crystal among all four crystals.

Step 5 – Draw the Plate Where the Crystals are Placed On

Draw a sideways oval shape at the bottom surrounding all four crystals. The rear part of the oval shouldn’t be visible as the crystals are covering it, as shown in the illustration.

Keep in mind that it should look like the crystals were standing on a circular platform.

Step 6 – Then, Add Details on the Tallest Crystal

Details and patterns are the distinctive features of any crystal, so that’s exactly what we’ll be drawing in this step.

Let’s start filling in the patterns of the biggest crystal. Simply draw a small V-shaped line on the upper edge of the crystal.

Then, draw an intersecting horizontal and vertical line across the crystal. Make sure to draw the lines in an angle to make them aligned with the form of the crystal.

Step 7 – Add Details and Patterns on the Next Crystal

In this step, we’ll be drawing the patterns of the other big crystal. The details in this crystal varies from the first one mainly because its form is different.

Draw a vertical line beginning from the crystal’s pointed edge at the top. Then, draw an angled horizontal line from the upper corner edges of the crystal intersecting with the vertical line

Now, we’ll be adding the details of the small crystal on the left side. Proceed by drawing a V-shaped line on the top edge of the crystal. Then, draw an intersecting angled horizontal and vertical line across the body of the crystal.

The details on this crystal should be similar to the patterns on the bigger crystal adjacent to it. This is because these two crystals have identical shape and form, and only the size differs.

Step 9 – Now, Finalize the Details on All Crystals

Since the remaining crystal has a similar form to the other small crystal, you can simply repeat the previous step. This completes the details and patterns on all four crystals.

When adding the details and patterns of any crystal, keep in mind that you’re simply outlining its form to magnify its dimensions.

Now that we’ve successfully drawn crystals, it’s finally time for the most exciting part. In this final step, we’ll be choosing the colors and coloring the crystals!

Crystals exist in every color there is. Some of them are even multi-colored! This gives you a lot of color options to choose from depending on which kind of crystal you’re drawing. For example, a malachite is green while a rose quartz is pink.

The colors you will be choosing for the crystals on your drawing is completely up to you! After all, it’s your work of art!

Have fun playing with colors and watch as the crystals ultimately come to life!

Do this to take your crystals drawing to the next level

Create a sparkly artwork with these tips we have on making your crystals drawing amazing!

Crystals come naturally in all different shapes and variations, so you could change the design of the ones in this crystals sketch.

If you were to do this, you could look at pictures of rough crystals, or you may know someone who owns one.

This would be a great way to do it, but you could also create your very own crystal shape! What kinds of shapes and variations would you go for?

Creating some rough crystals is one idea, but you could also make them look more refined and change the design. For this, you would again benefit from looking at refined crystals to help you out.

If you can somehow get a real one to use as a model, then that would be even better! You could even incorporate the crystals into rings and other jewelry.

Again, don’t be shy about creating your own unique variations! What kinds of jewelry would you use these pretty crystals for?

When you have settled on the design of your crystals, you could also create a cool background. Adding a background would be a great way to make this drawing of crystals even more interesting!

For example, you could have the crystals sitting on a fancy felt pillow in a museum. We mentioned adding the crystals to jewelry, and if you do that then you could draw a character wearing them.

What other settings can you think of that you could use for these crystals?

Lastly, you can use some interesting art tools and mediums to make this crystals drawing really shine! Some of these could be more conventional such as colored pens and markers for bright colors.

But what if we told you that you can make these crystals literally sparkle? You could do this by spreading a thin layer of glue over the crystals.

Then, carefully drop some glitter onto the glue to make it sparkle. Blow away the excess and you have a sparkly gem to admire!

Your Crystals Drawing is Complete!

We hope you enjoy this step-by-step crystals drawing tutorial.

We are regularly adding new content on our “How to Draw” catalog, so don’t forget to keep checking back to continuously enjoy brand-new drawing tutorials. What would you like to draw next?

As soon as you finish drawing and coloring the crystals, make sure to show off your masterpiece! Take a picture of your artwork and post it on our Facebook page and Pinterest.

Don’t be embarrassed, we’re sure it looks impressive because you’ve worked hard for it!

We would love to see your stunning crystals drawing! 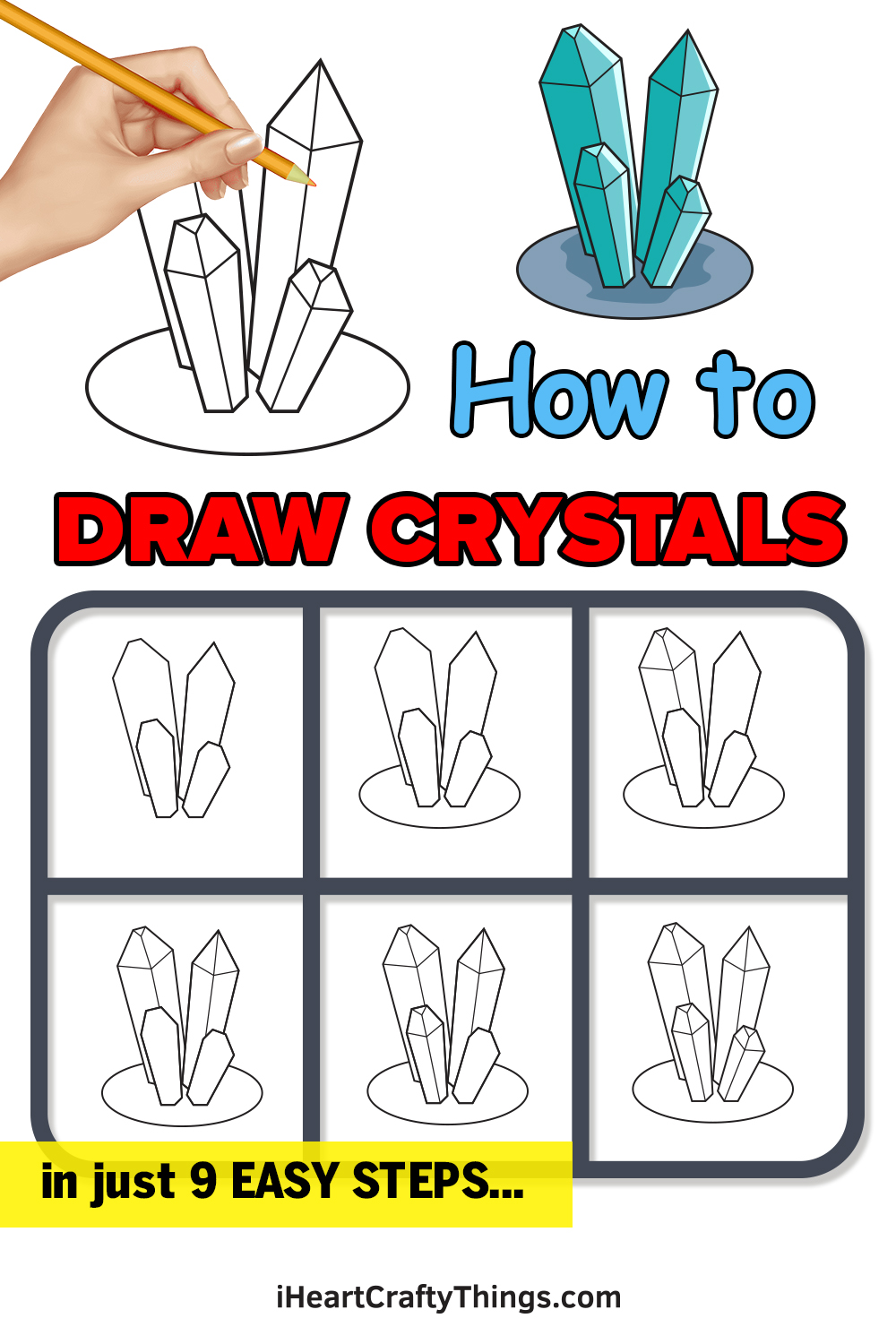 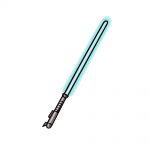 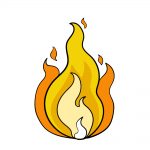