The concept of a zombie is quite a scary one just by its very nature!

These shambling monsters have appeared in many works of fiction spanning multiple genres, and people can’t seem to get enough of them.

There have been so many different interpretations over the years, and now you get to create your own one as you learn how to draw a cartoon zombie!

By the end of this tutorial, you will be able to create your very own cartoon zombie and put him in all sorts of creepy scenarios!

We hope you have a great time showing off your creative powers with this step-by-step guide on how to draw a cartoon zombie in just 6 easy steps! 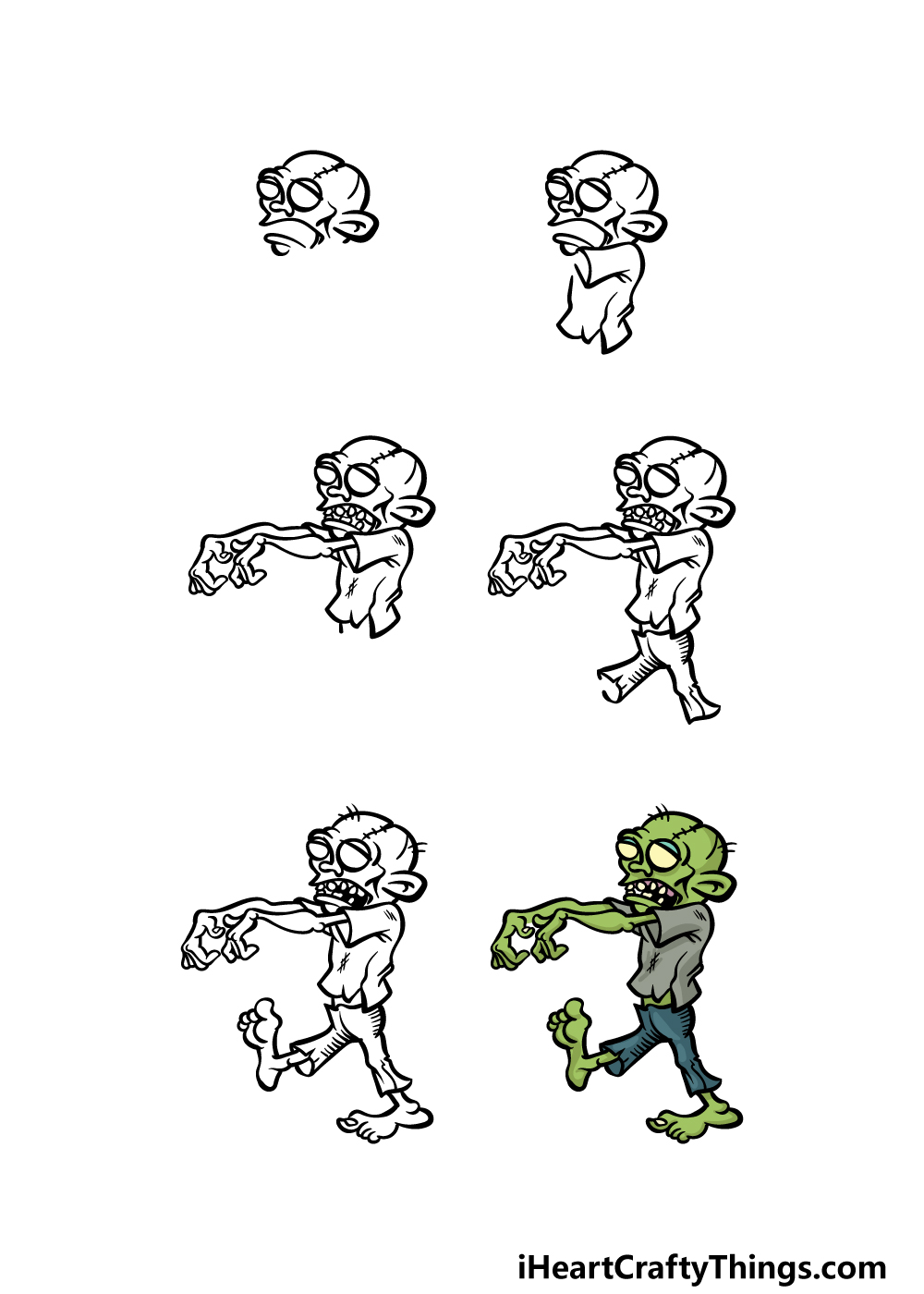 How to Draw A Cartoon Zombie – Let’s Get Started! 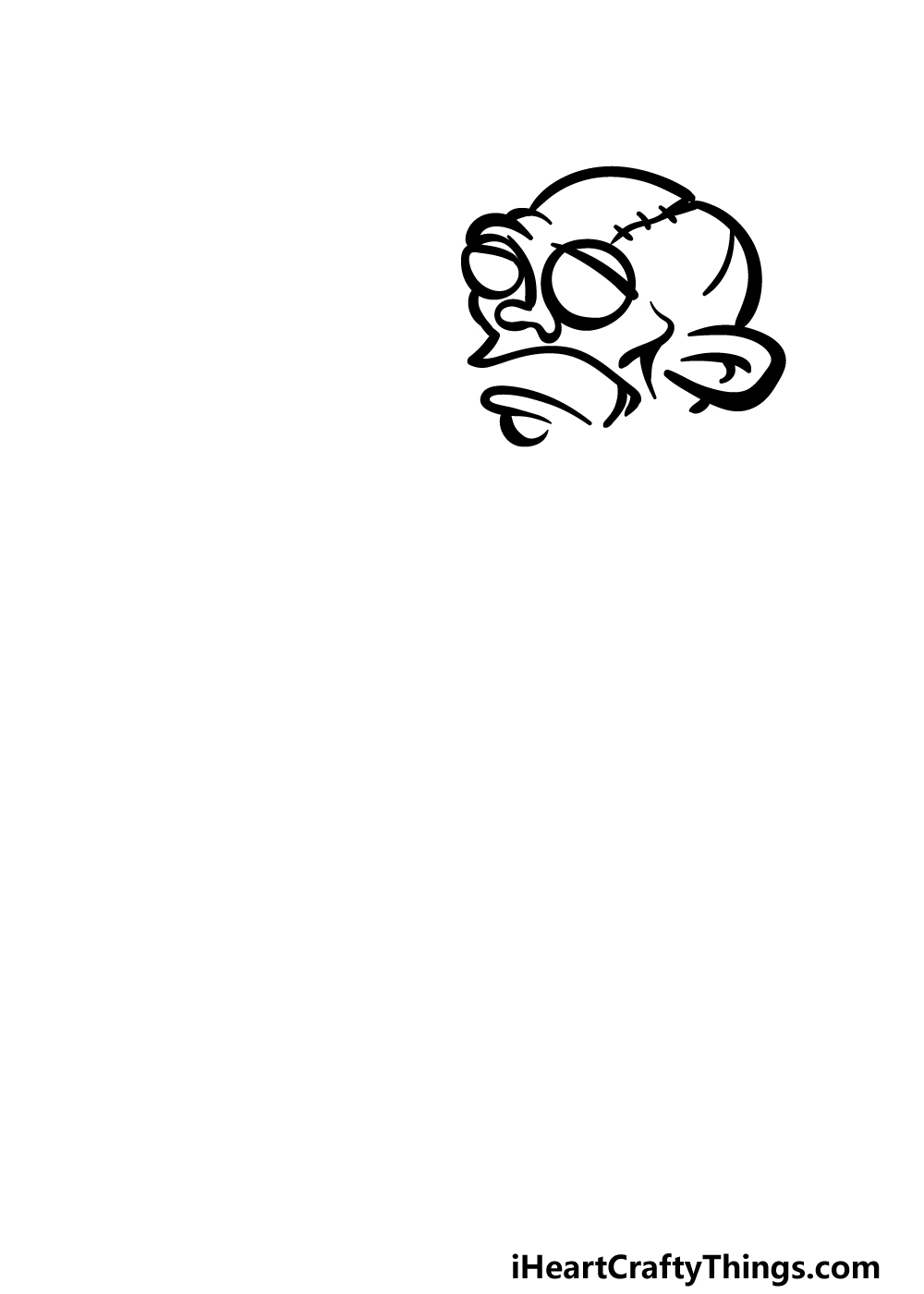 Let’s take things from the top as we begin this cartoon zombie drawing. We will be drawing his head here, and even though it is a cartoony interpretation there are still some great details included.

We will use some circles for his eyes, and then use some twisty lines for his nose between.

His head will be rather rounded and smooth, and there will be a large scar with stitches extending into the head.

We will then use a large curved line for his ear, and then draw his open mouth. That’s all for this first step, and then we can proceed!

Step 2 – Now, draw the start of his shirt 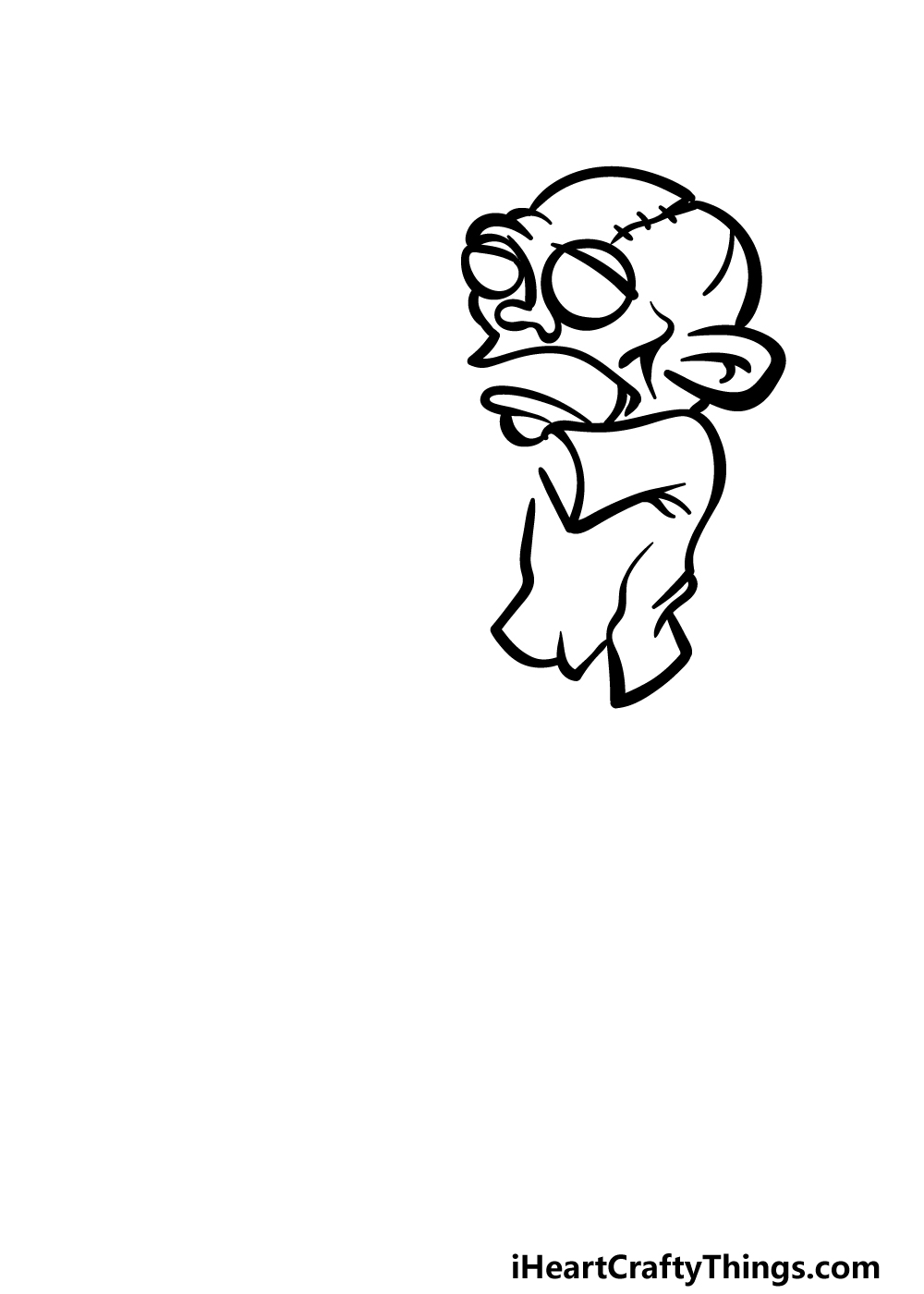 We will leave his head for now and draw the start of his shirt in this step of our guide on how to draw a cartoon zombie.

As you can see in some later steps, he will be posed in a traditional zombie pose with his arms extended out in front of him.

The shirt sleeve that is closest to us as the viewer will be raised up, and there will be a small space in it where the arm will go later.

Then, for the waist of his shirt, we will be using lots of curved, bent lines to make it look creased. There will also be some gaps at the top of the left side of the shirt, but that will be filled in soon too.

Step 3 – Next, draw his arms and add some details 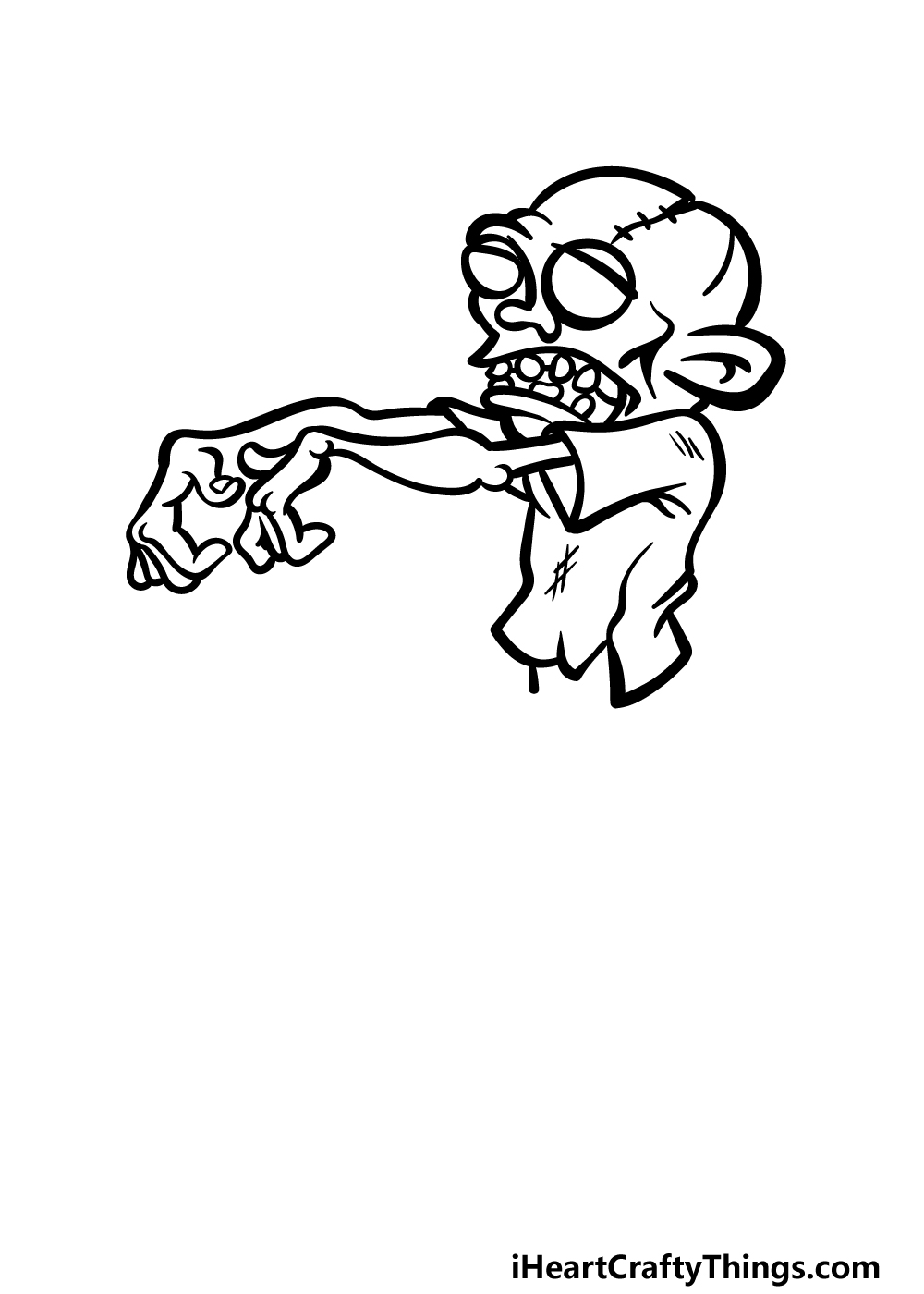 This third step will see us adding quite a lot to the drawing! This is one that you should try to take slowly and have fun with. First, we will draw some teeth into his mouth.

Each tooth will be small and rounded. Then, we will draw his extended arms. The arms are quite detailed and have a lot of curved lines.

They start out quite thin, and then they get thicker and rounder before you get to the angular hands pointing down at the ends.

Finally, add some cross-hatch lines onto the shirt for added texture details. It’s a lot to add, but just take your time with it and follow the images and you’ll be fine! 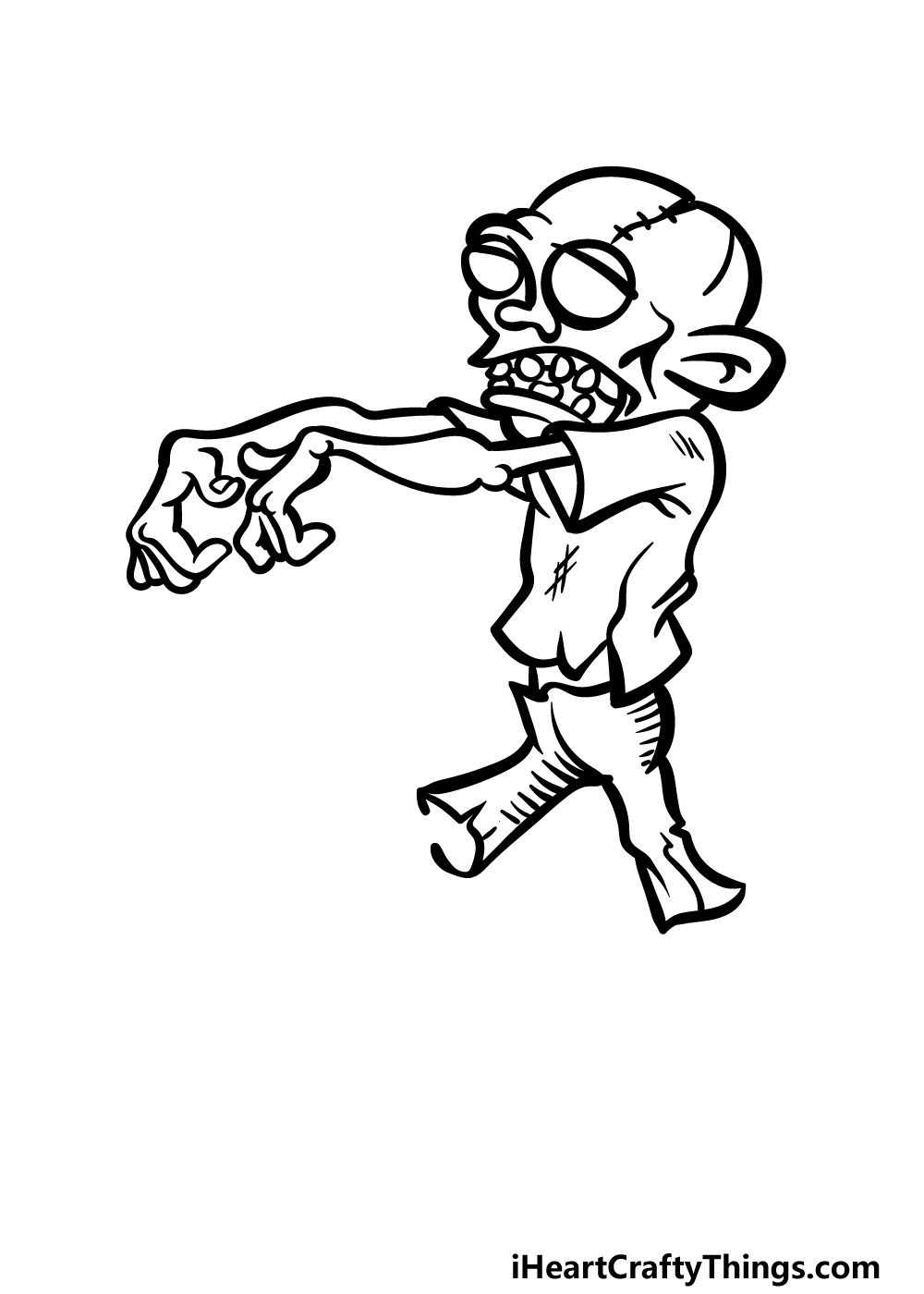 Next, we will add the pants that your cartoon zombie drawing will be wearing. These will be positioned to show that the zombie is walking.

The leg on the left will be up in the air a bit while the other one will be extended backward. They will be drawn using some curved and rounded lines.

Once these pants are drawn, we will then move on to some final details in the next step of the guide! 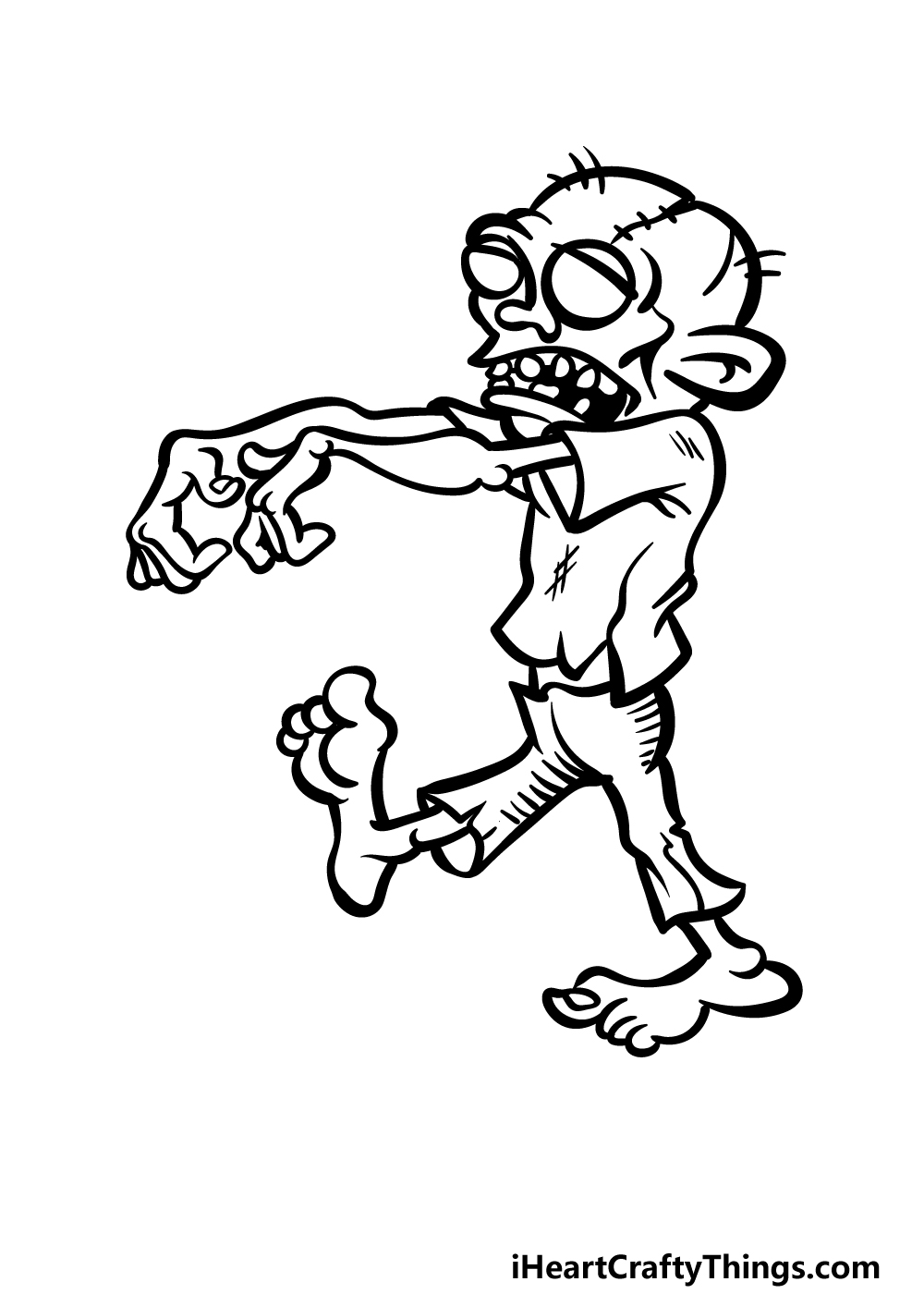 It’s time to add the finishing touches and details before we move on to the final step of this guide on how to draw a cartoon zombie! First, we will add the legs.

The legs will be similar to the arms in that they will be thin before ending in large feet. The feet will be drawn using mostly curved and rounded lines.

Then, we will add smaller details such as small hairs poking off of the head, and then we will color the mouth interior in solid black between the teeth.

Once you have added these final details, you will be ready for the final step! Before that, you could also add any extra details you may like.

It could be fun to design a background for him, and there are so many fun scenarios you could create for him! 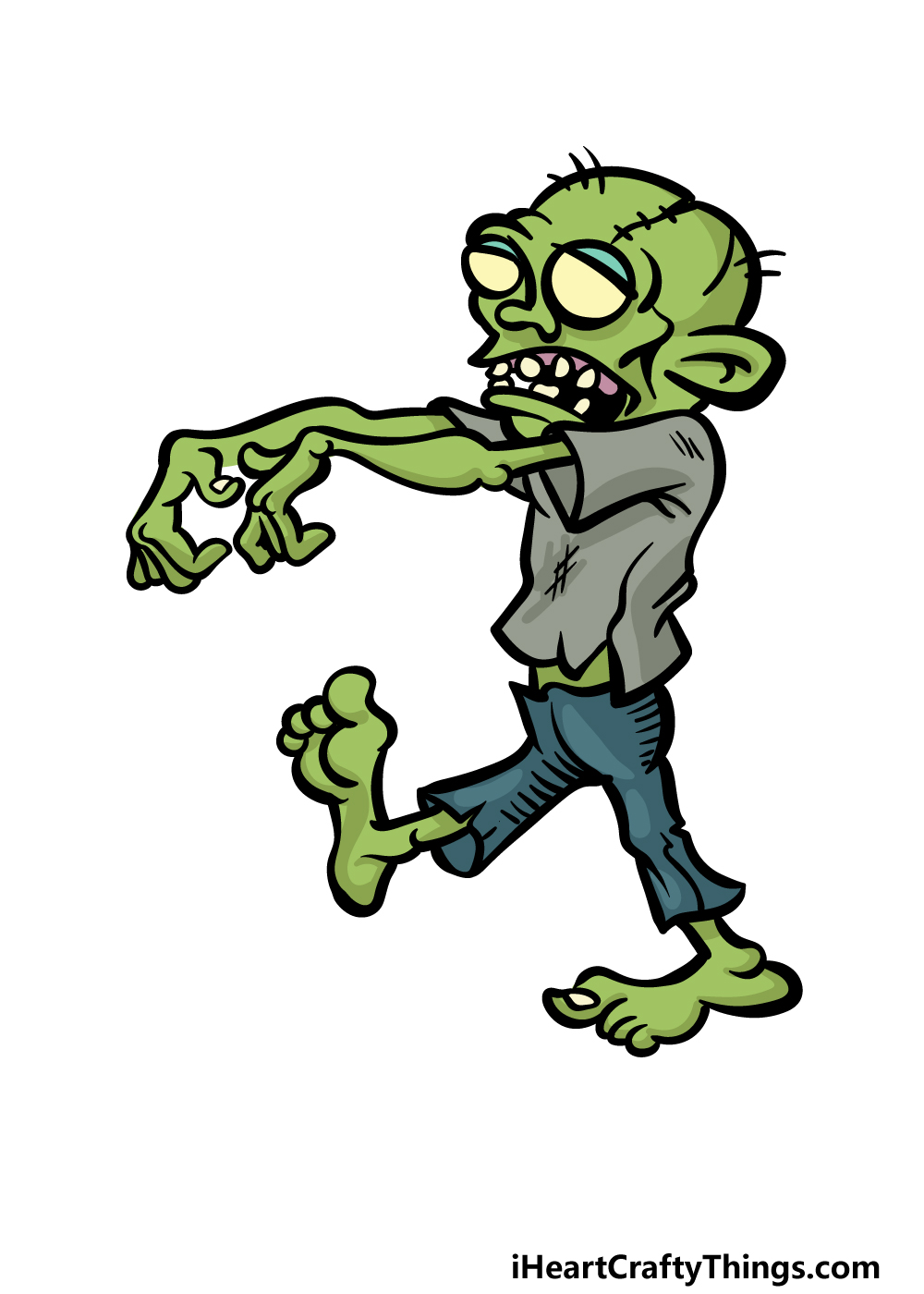 The final process to take on with this cartoon zombie drawing is to finish him off with some colors!

In our example, we used bright greens for his skin and then went with greys for his shirt and blues for his pants.

These are certainly colors you could use for your own image, but don’t be afraid to experiment with your own color choices!

This is your drawing, and you can finish it off in any way that you please. The possibilities are endless, and you can play around with all sorts of color and art medium combinations.

How do you think you will finish off this awesome cartoon zombie? We can’t wait to see how you finish it!

Make some spooky artwork with these tips for your cartoon zombie sketch!

This drawing of a cartoon zombie shows just one member of the undead, but it would be even more terrifying if there were more!

To show more zombies, you could just follow through the guide again and create others with some variations. If you have the patience, you could make a giant horde of zombies!

How many zombies do you think you could fit on this page to make this a real zombie stampede?

There are a few gruesome details on this cartoon zombie that we have drawn, but you could add some more! For example, you could add a gross detail like his brain sticking out a bit.

Or you could draw some more stitches and maybe remove a finger or two. Small details like these can help to make the zombie look even scarier!

These details are also worth keeping in mind if you want to add more zombies as we suggested in the first tip we had for you.

When it comes to adding characters to this cartoon zombie drawing, you don’t need to stick to just zombies!

They could be drawn in a similar cartoon style to the zombie, or you could try out some different art styles. You can create some pretty cool and tense scenarios by adding some humans to the scene!

Finally, you can finish it all off with a background. For this background, you would probably want to create a setting that is as spooky as this cartoon zombie sketch is.

Some classics would include a misty graveyard or maybe a haunted house. These kinds of settings would work well, but you could create any kind of setting you like.

It would also be scary to have the cartoon zombie prowling a more normal, everyday environment. Where would you like to set this drawing once you have added more elements?

Your Cartoon Zombie Drawing is Complete!

Zombies may be quite scary, but we hope that this guide on how to draw a cartoon zombie wasn’t frightening to take on!

Whenever you take on a new drawing, it’s always so much better to take it slowly and follow steps to make sure you don’t get stuck.

That’s what we aimed to do for you in this guide, so we hope you enjoyed it!

Then, you can add your own creative flair to the image as you add extra details, background elements and other cool additions.

It’s up to you to show us what you can do now, so be sure to have fun with it!

If you enjoyed this guide, our website is the place to be for more awesome drawing guides and other activities. Remember to check in often to never miss out on the new content we bring out!

It would be great to see your creepy cartoon zombie drawing, so please share it on our Facebook and Pinterest pages for us to see when it’s done. 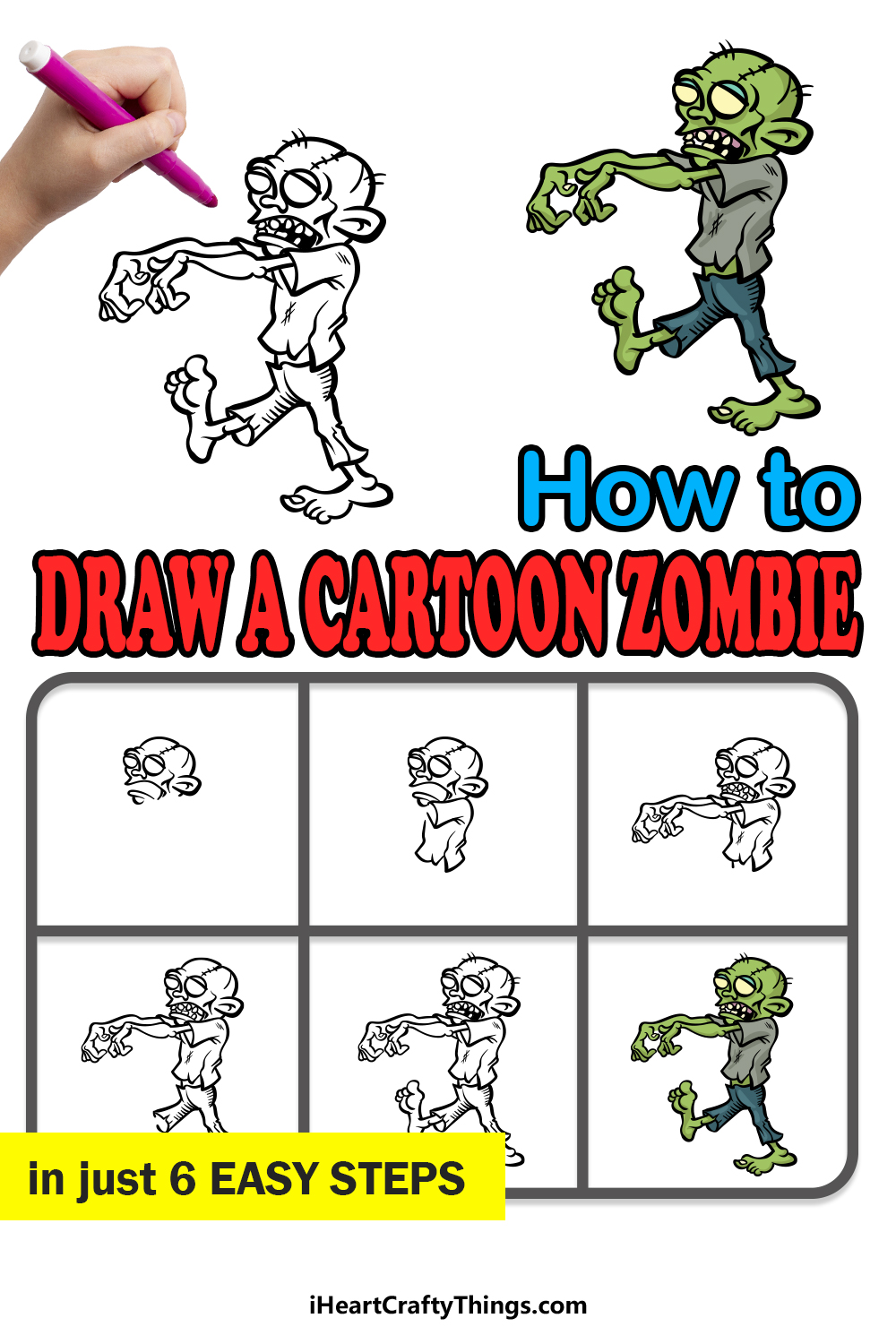 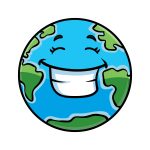 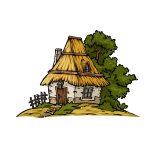