There are many incredible natural phenomenons that we get to witness every day, but few are as stunning as getting to see a rainbow out in the wild.

These incredible colored arches appear after the rain, and their brilliance has made them a thing of legend in many cultures.

They have also come to symbolize hope and prosperity, and they appear in many different art portrayals. Now it’s your turn to create on in this guide on how to draw a cartoon rainbow!

You will be able to create a simple yet stunning portrayal of a beautiful rainbow by the end of these steps.

So get ready to chase the rainbow as we begin this step-by-step guide on how to draw a cartoon rainbow in just 6 fun and easy steps! 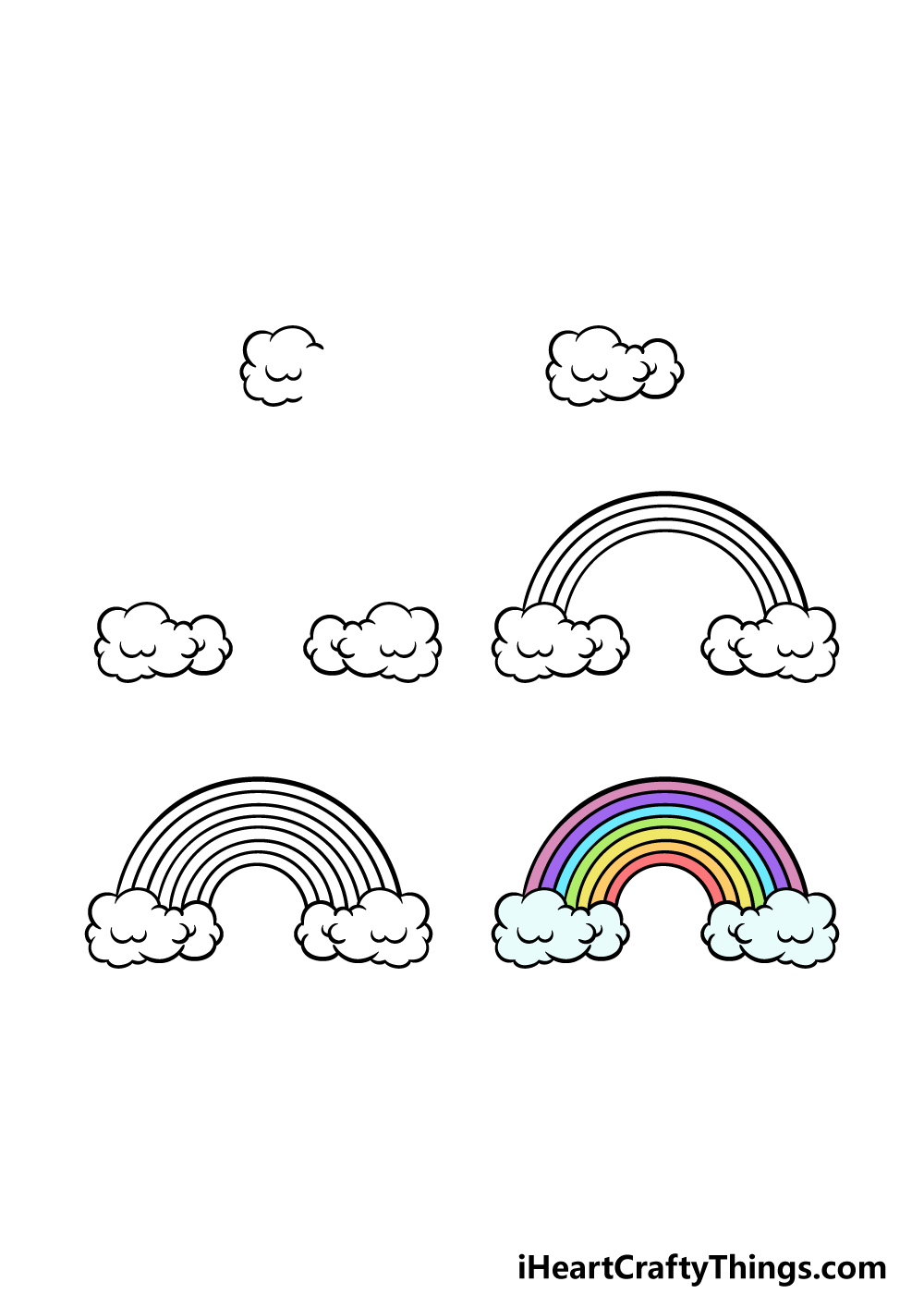 How to Draw A Cartoon Rainbow – Let’s get Started! 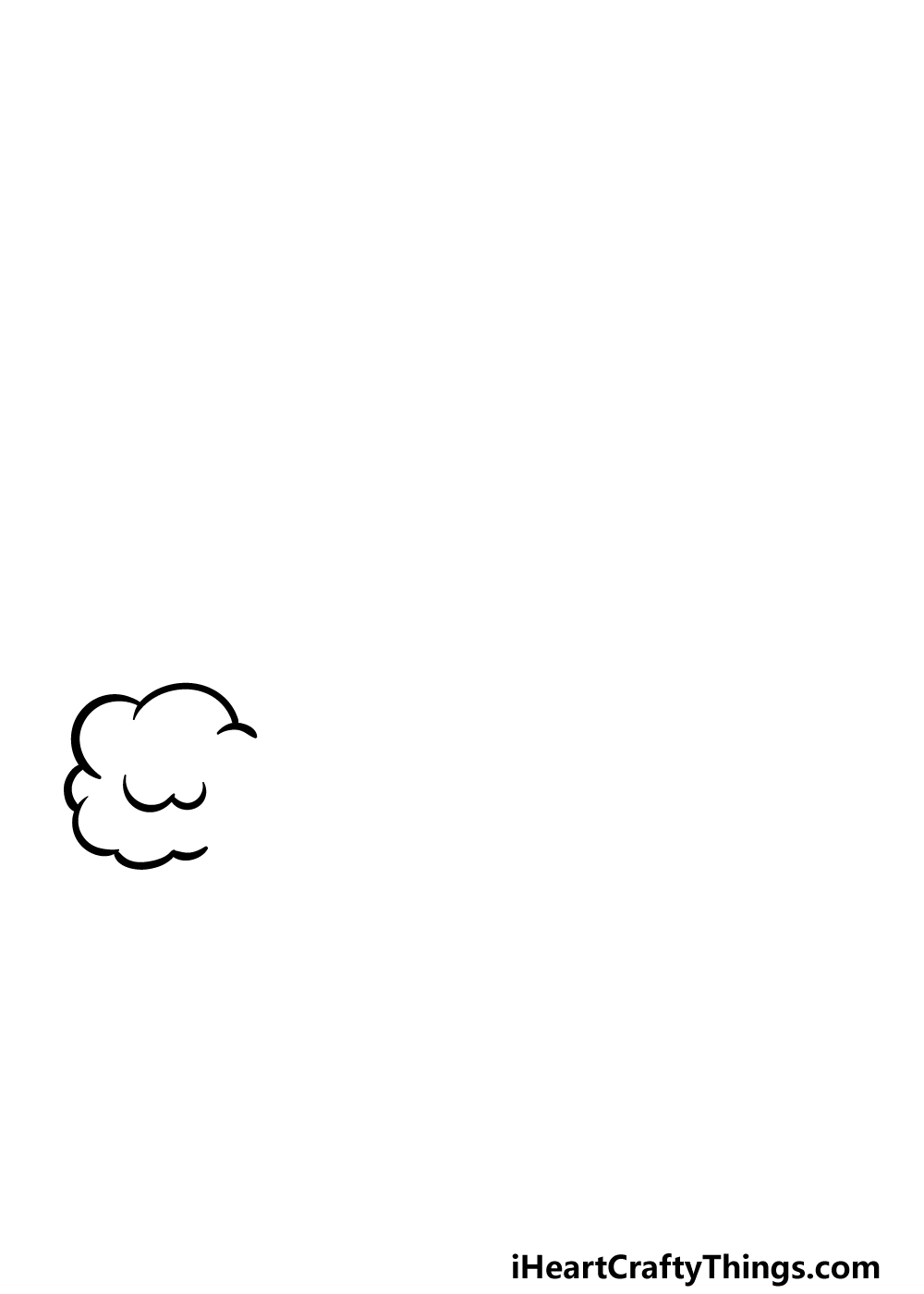 The picture we will be drawing in this guide on how to draw a cartoon rainbow will be a stylistic one that has each end of the rainbow resting on a cloud.

We will begin this process by drawing the cloud on the left.

As shown in the reference image, the cloud will be drawn using a series of rounded lines connecting to one another to make it look nice and puffy.

There will also be some curved lines inside of the outline to provide some puffiness to the interior.

As you can see in our reference image, we will also leave an empty space on the right-hand side of the cloud, but we will fill that in later.

Step 2 – Draw some more of the cloud 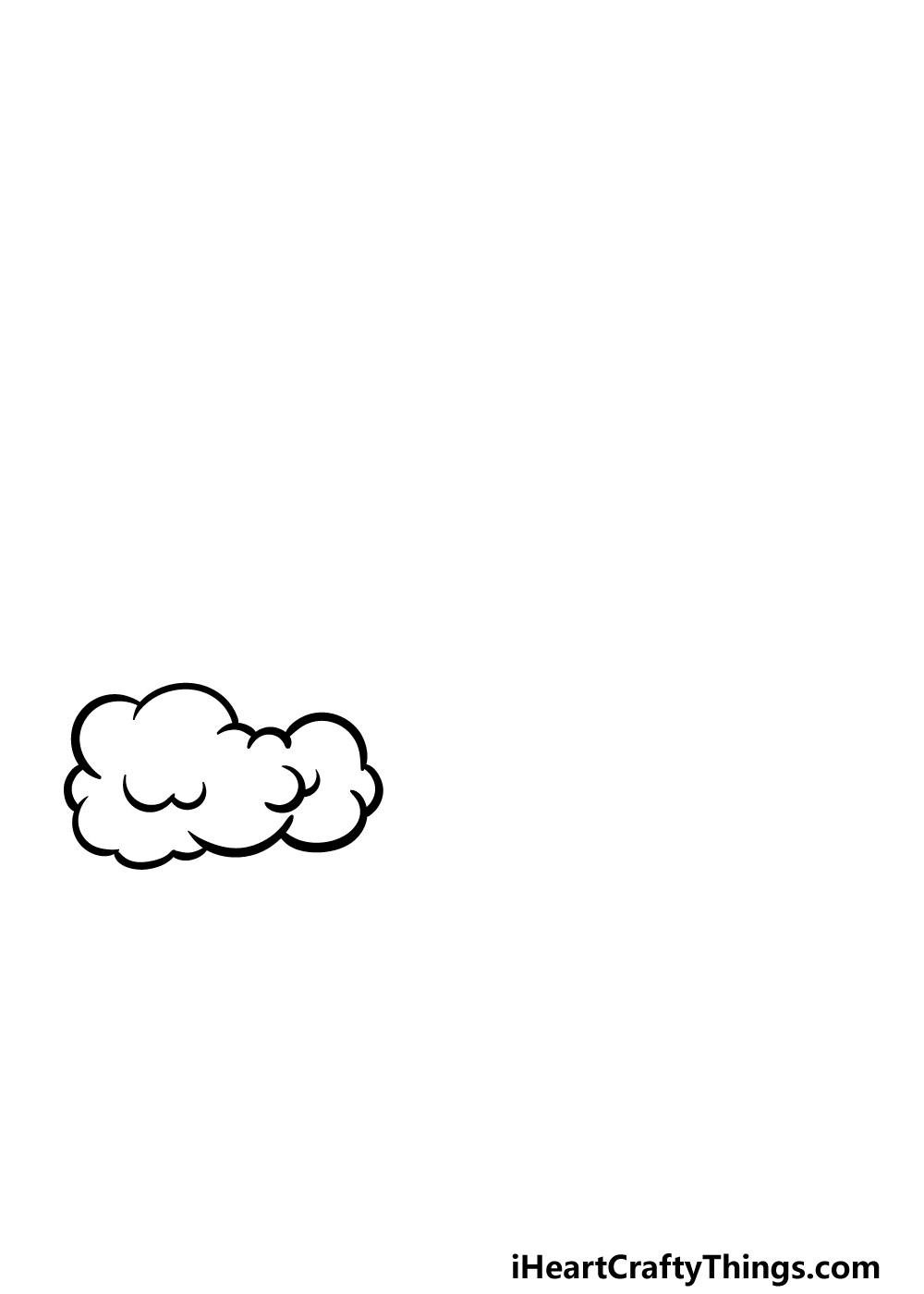 We will finish off the outline for the first cloud of this cartoon rainbow drawing in this second step.

The right-hand side of the cloud will be a bit thinner, but it will be drawn with some similarly small, curved lines connecting to one another.

There will also be some curved lines inside of the outline for further puffiness.

That’s all for this cloud, and then we can move on to some more details in the next steps! 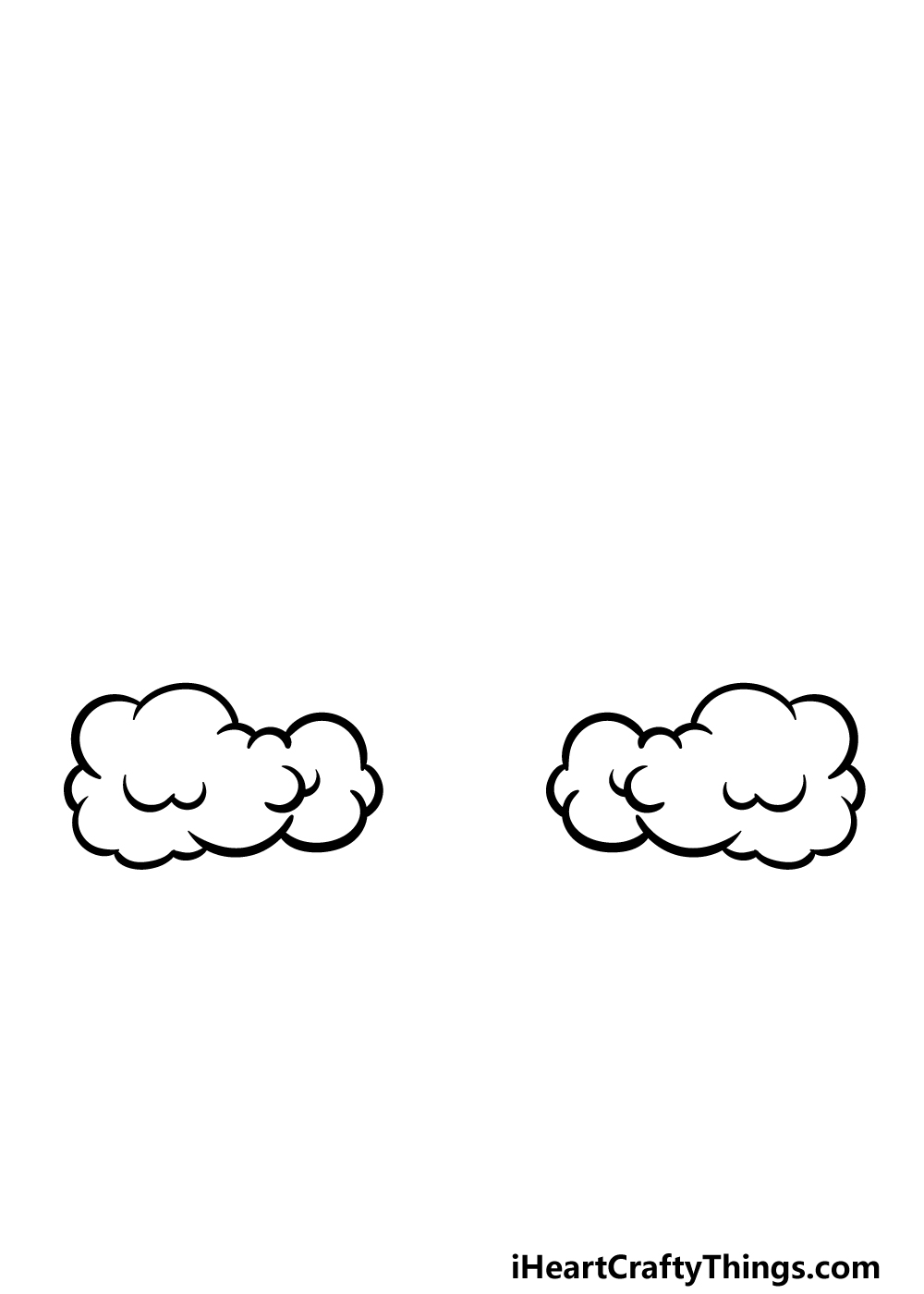 For this step of your picture, we will essentially be recreating everything you did in the first two steps to create a second cloud for the composition.

As you can see in our example, this cloud will be reversed, but it will be a mirror image of the previous one.

That means that it will have the same bumpy outline with the same inner details. You could change up how some of these outlines look if you wish! Then, we can start drawing the rainbow itself. 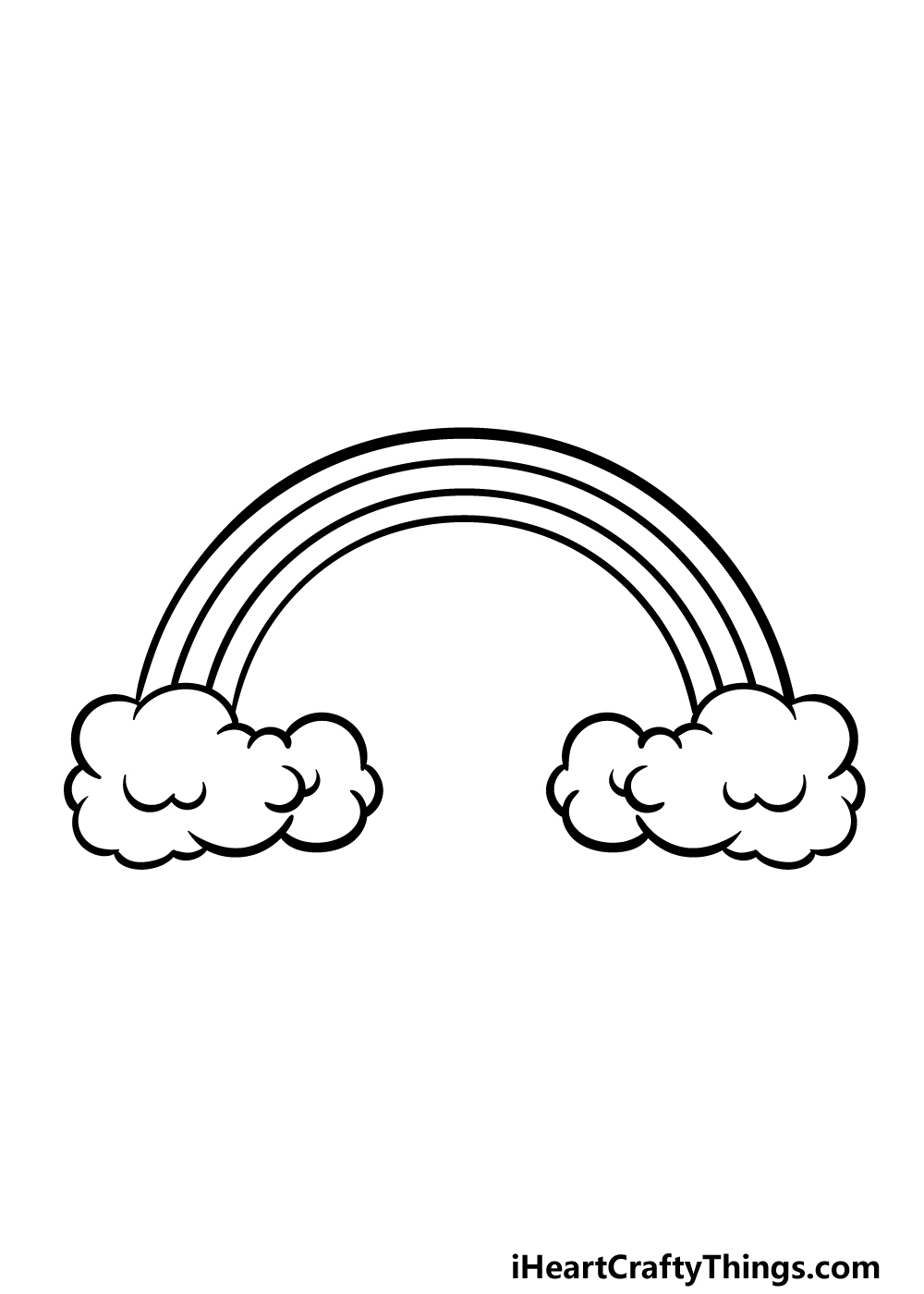 As we mentioned in the previous step, this one will be focused on drawing the rainbow itself. To do this, we will essentially be drawing several curved lines stretching from one cloud to another.

The lines we will use for the rainbow will be fairly simple, but it can still be trickier than you may expect!

For that reason, we will be taking it slowly as we draw them. Start by drawing the outer line of the rainbow, and try your best to keep it nice and smooth.

Then, we will draw three more layers of these lines underneath it. That’s all you need to do for now!

In the next few steps, we will be finishing up the drawing with some final details and touches, so let’s proceed when you’re ready!

Step 5 – Now, you can add the final details for this cartoon rainbow 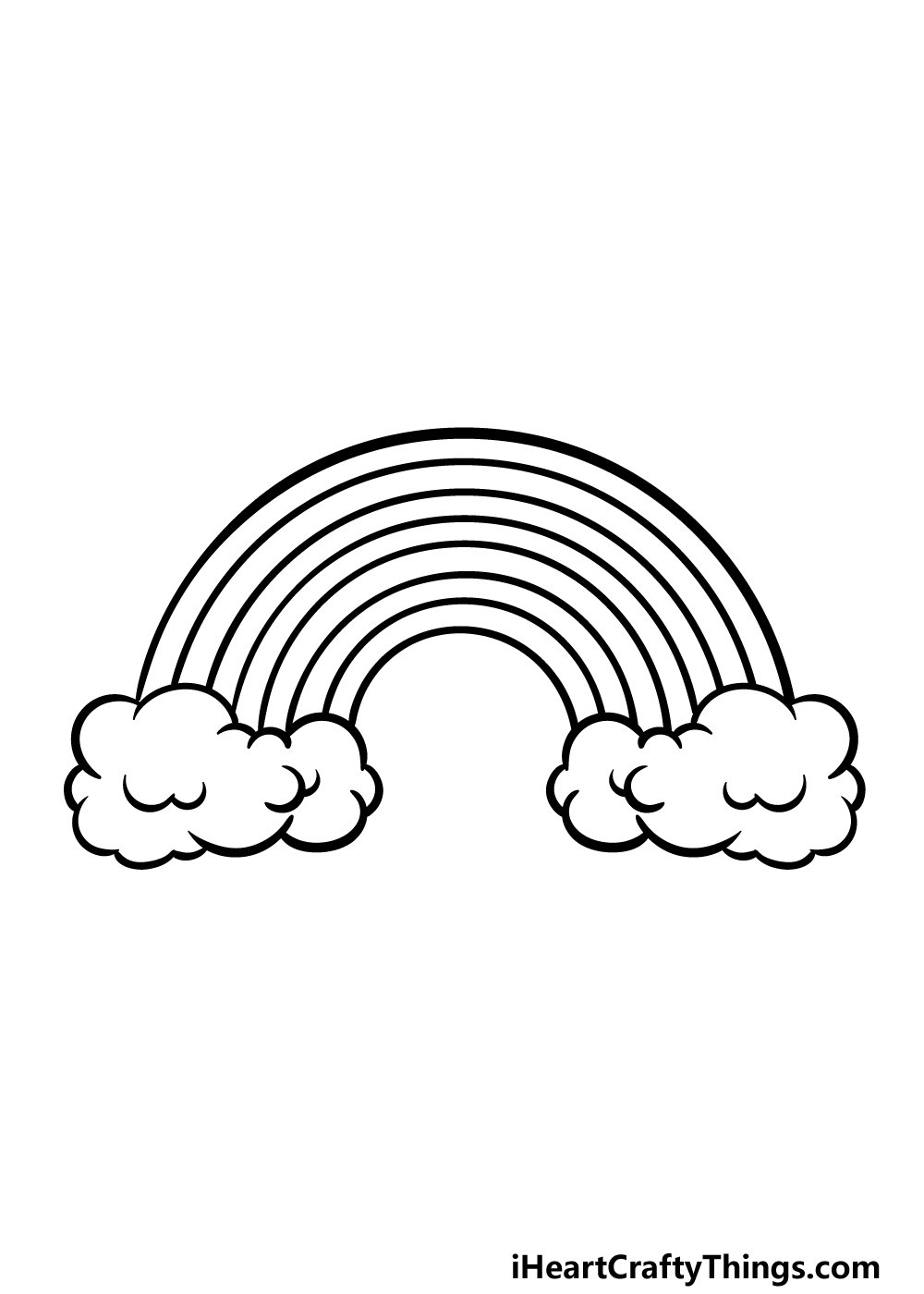 You’re ready to finish the outlines for this cartoon rainbow drawing now as we add the final touches and elements.

First, you will be adding four more curved lines to the inner edge of the rainbow. These will run parallel to the previous ones, and they will get smaller with each one.

Once you have finished these lines, you have completed the design, but you don’t have to stop there!

This is the point of the guide where you can add some extra details of your own.

You could maybe design a beautiful background featuring clouds and birds for one idea, or you could incorporate it into a more stylistic design!

For another fun idea, you could give it an Irish twist and draw a pot of gold under the rainbow! These are just a few ideas, but what else can you think of? 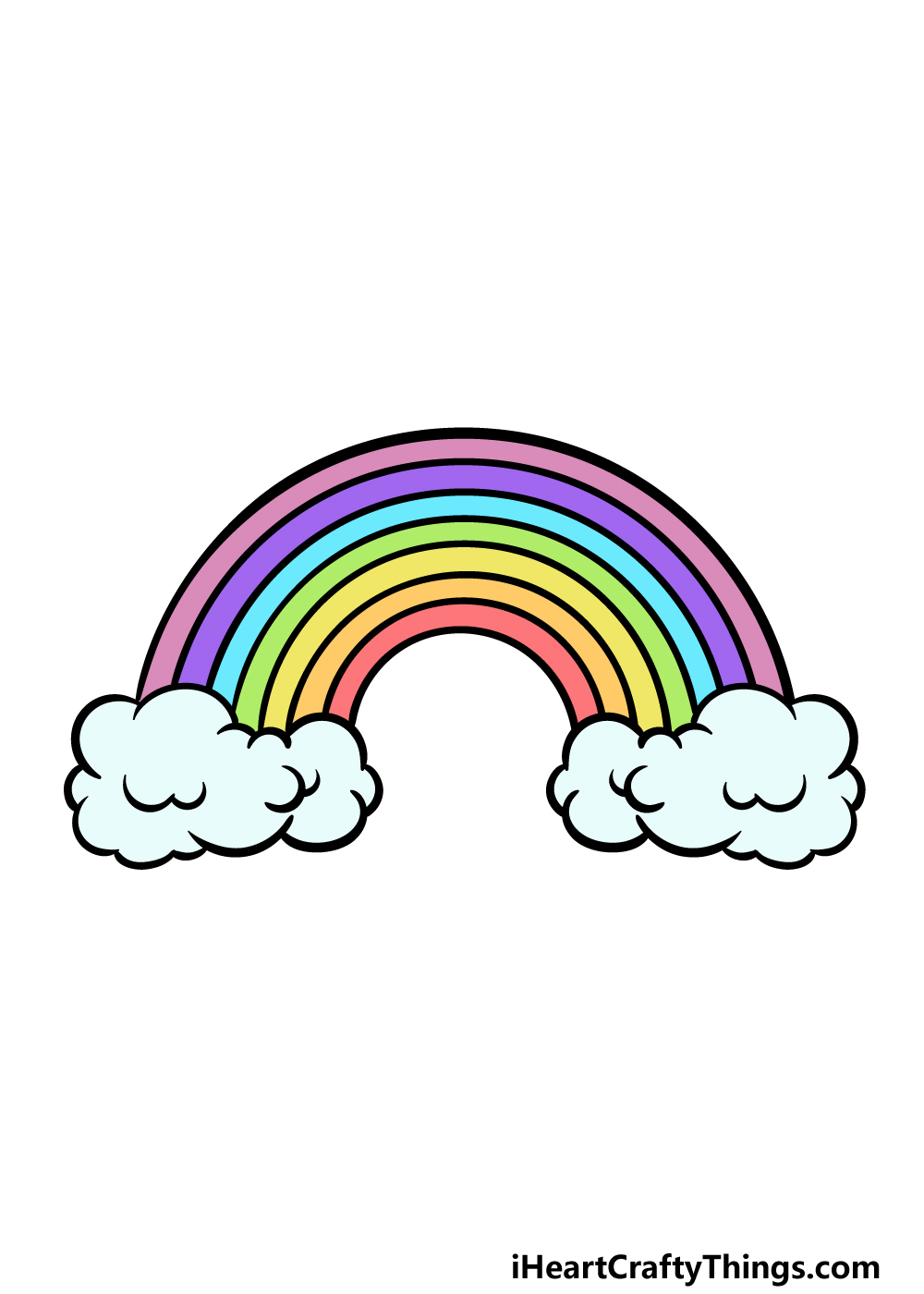 Now it’s time to close off this guide on how to draw a cartoon rainbow with some colors!

If there’s one thing rainbows are known for, it’s their colors, and they are often used as a color benchmark.

Rainbows usually have a specific color scheme in real life, but this is your drawing so you could go for other colors if you prefer.

In our reference image, we created a stunning image by using a different color for each layer.

You could take a similar approach for your own one, or you could change it up and go for some color patterns instead.

We also think that some bright art mediums such as colored pens or markers would look amazing for this drawing.

It’s up to you, so how will you finish off this image with your color creativity?

Have some colorful fun as we make your cartoon rainbow sketch even better!

This drawing of a cartoon rainbow shows the standard colors of the rainbow. This makes it look more like a real rainbow, but you could also use some unique colors if you prefer.

The sections of this cartoon rainbow are quite narrow, so you would be best off using art tools and mediums that allow for precision, such as colored pens or small brushes.

Changing the colors would be a great way to make this rainbow more unique to your own tastes.

Rainbows are associated with various myths and legends that you could use for this artwork. One of the most famous ones to use would involve leprechauns.

These beings from Irish myths and legends are said to hide pots of gold at the end of a rainbow. Adding these elements would be a great way to make your drawing look even better!

It is just one example of a legend associated with rainbows, so if you have other ones then they could be used instead!

This cartoon rainbow drawing has each section of the rainbow separated into a separate section. There are other ways that you could portray these sections of the rainbow, however.

Once you have chosen the art medium you would like to use, you could add these color sections using just the medium you chose instead of drawing the sections.

It would look amazing to use watercolor paints for this purpose, for example!

Finally, once your cartoon rainbow sketch looks exactly as you want it, you could finish it off with a background setting. This is something you could really use your imagination on!

It would be amazing to pick a beautiful landscape setting to use as the backdrop to this rainbow. The background will make this already beautiful rainbow look even more stunning.

If you need some inspiration, try looking up some images of famous landscapes and try to adapt them to your drawing. What background would you use?

Your Cartoon Rainbow Drawing is Complete!

What an amazing picture you have created at the end of this guide on how to draw a cartoon rainbow!

Even though the details were a bit simpler for this image, we hope that you found it to be a fun and easy experience with the steps to help you.

We also wanted to leave it open for you to express your own creativity with your own details, so don’t be afraid to experiment!

What fun extras and bold color choices can you think of that would look great on this image? It will be great to see what you choose!

When you’re ready for more to enjoy, you can check out our website for more drawing guides and other activities. We look forward to seeing you there soon!

Then, when you’re ready to show off your finished cartoon rainbow drawing, you can share your creation on our Facebook and Pinterest pages for us to see. 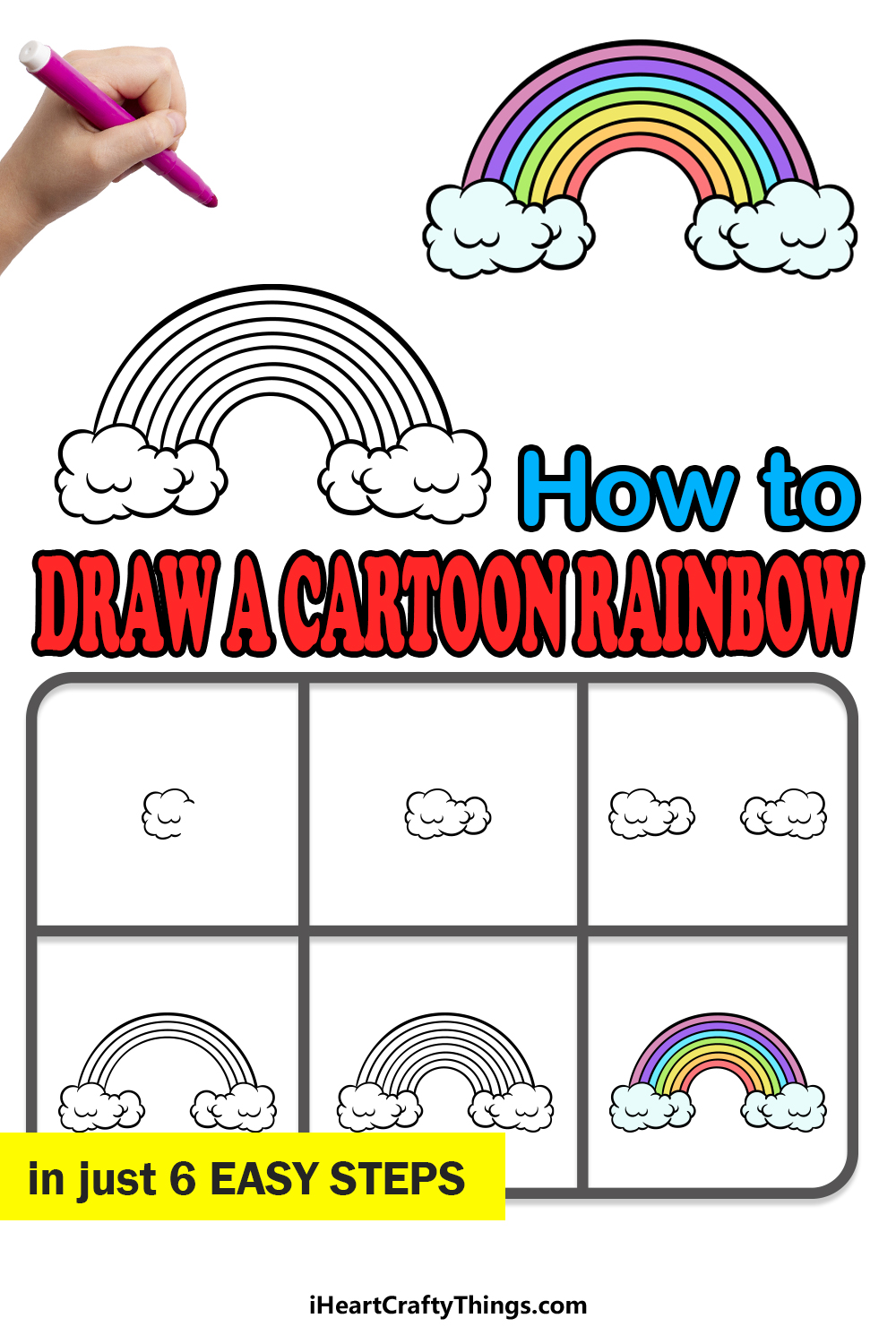 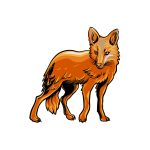 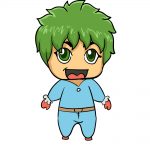