Airplanes and other aircraft are such a common sight in the modern world that it’s easy to take what a technological marvel they are.

They seemingly defy the laws of physics as they carry millions of people around the planet every year.

While they may occasionally be taken for granted, there are still many aviation enthusiasts around the world that can’t get enough of their favorite aircraft.

They are also well depicted in many forms of media, but even if you love them too, you might think that drawing one would be difficult.

We created this step-by-step guide on how to draw an airplane to show you that it’s not only easy but lots of fun! 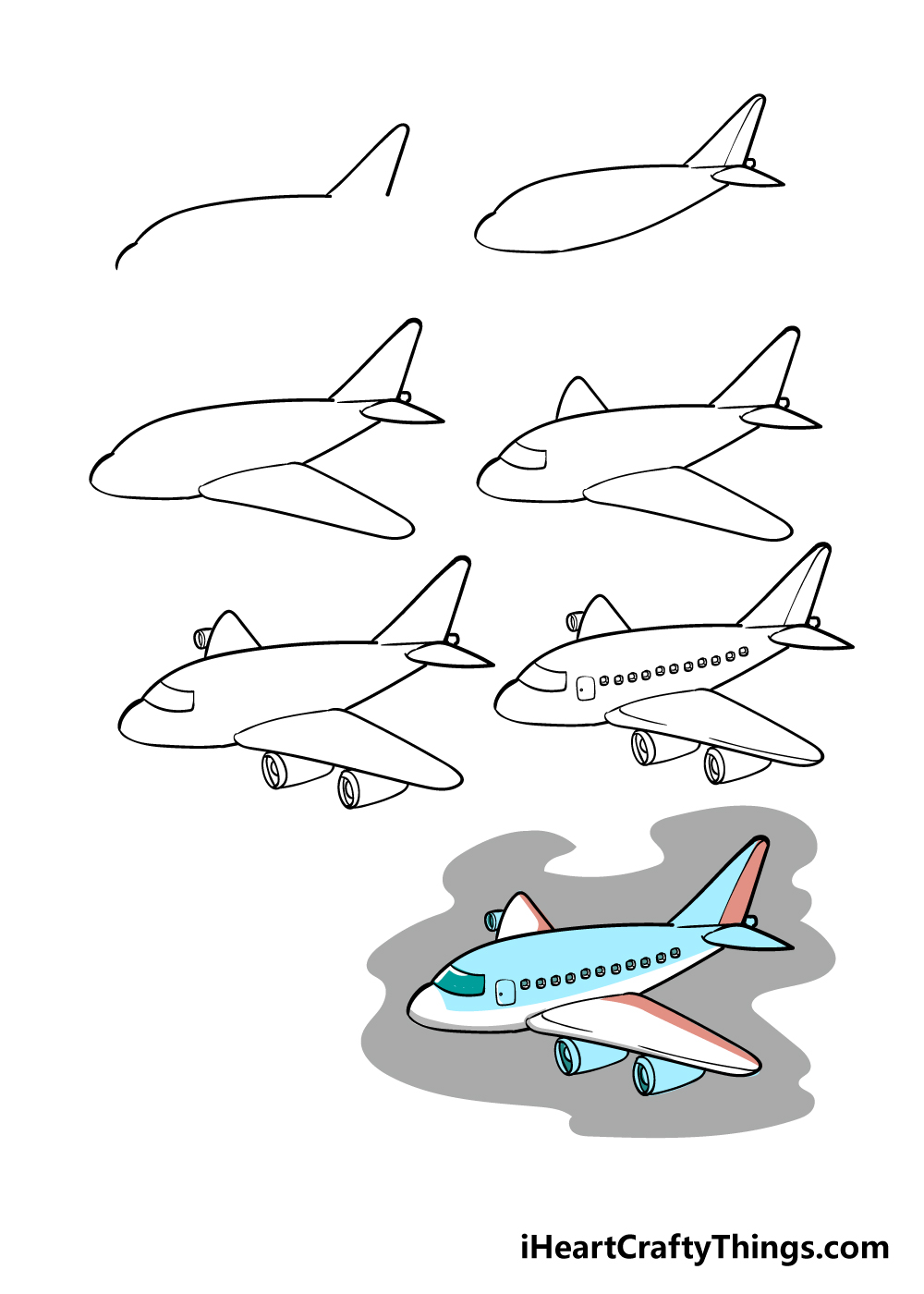 How to Draw An Airplane – Let’s get Started 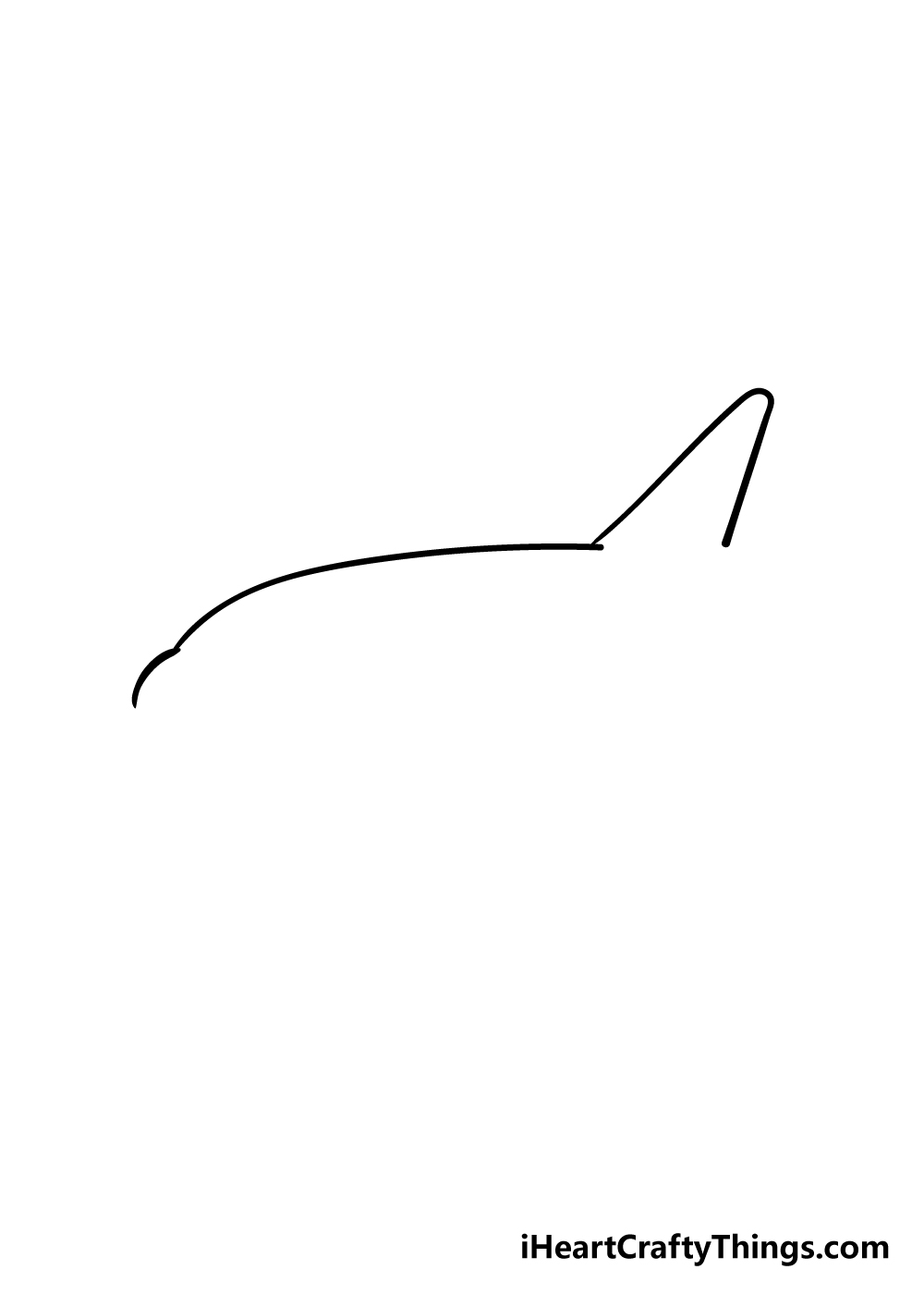 For the first step of our guide on how to draw an airplane, we will start with the upper section of the plane.

To do this, simply draw a curved vertical line that will form part of the nose, and then draw a long slightly curved horizontal line.

Finally, draw a sharply curved vertical line for the top of the tail of your airplane drawing.

With the start of your airplane done, you’re ready for step 2!

Step 2 – Next, draw the bottom of the plane 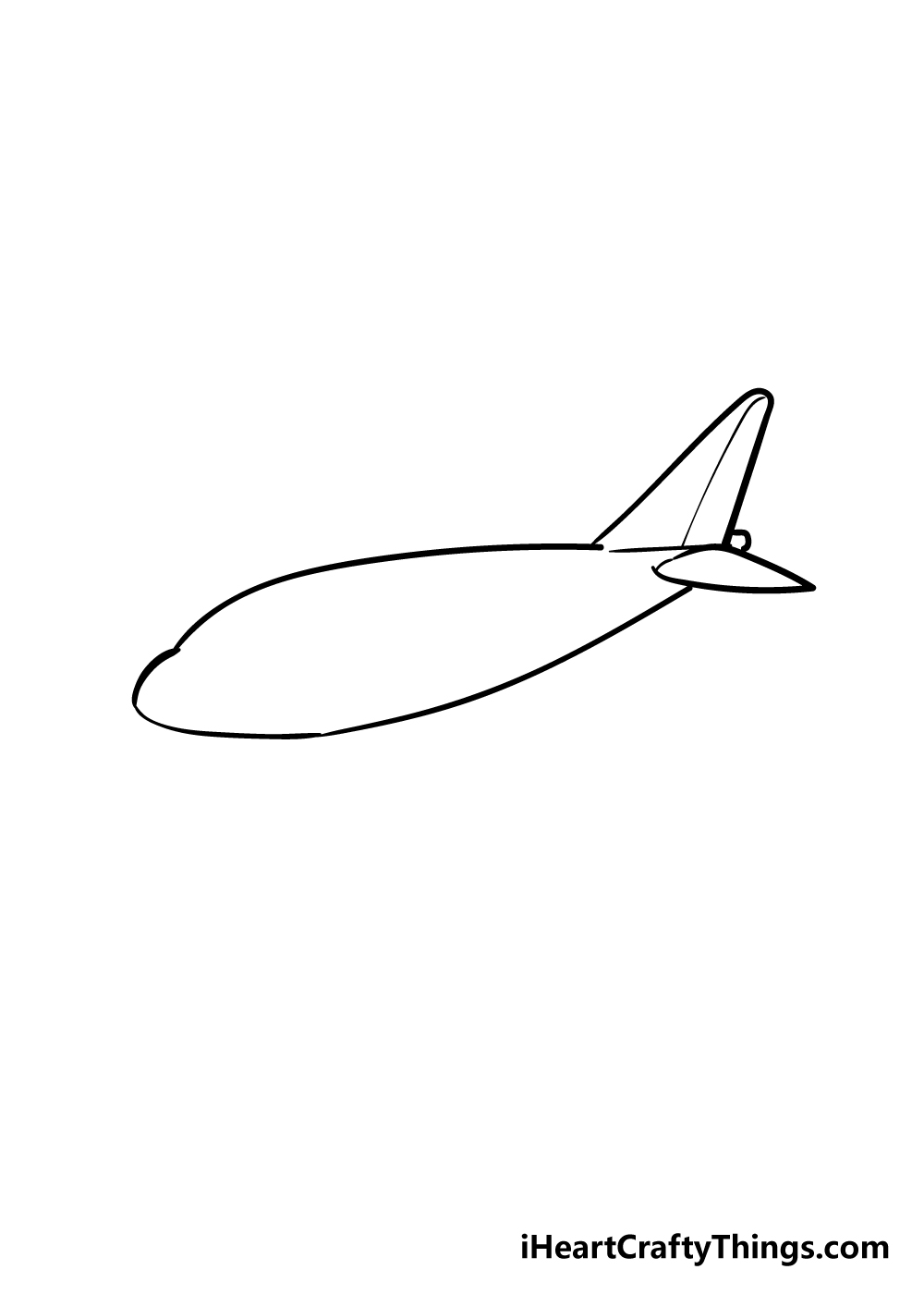 To create an underbelly for your airplane drawing, you can mirror the lines that you created for the first step. The difference will be that there won’t be a large fin jutting out like there is on top of the tail.

Instead, simply draw a small fin piece coming out from the side. It will also help to look at the next step to see where the wing will be going so that you can leave a space for it. 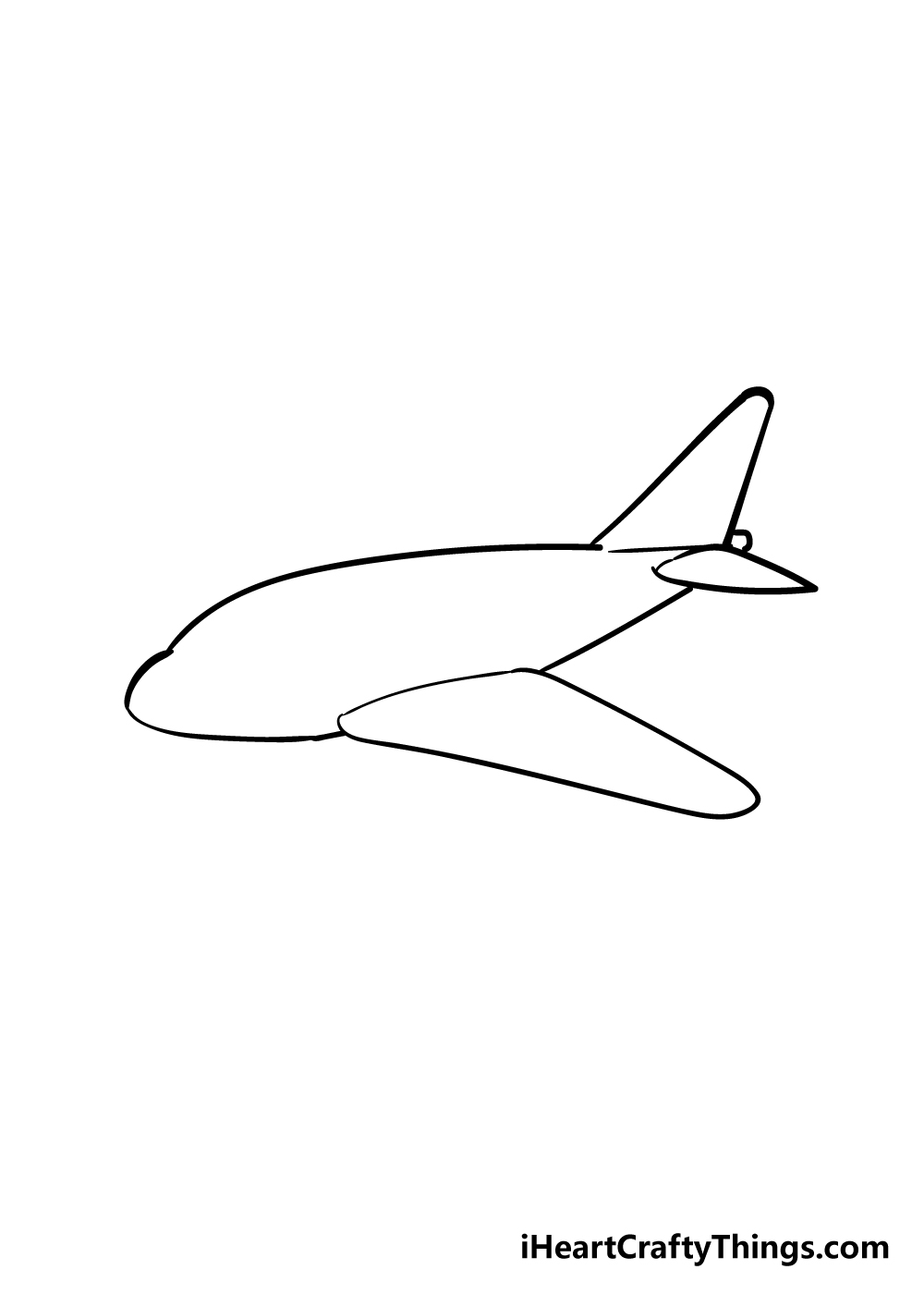 We’ll be adding a wing in this third step of our guide on how to draw an airplane. You’ll be glad that you left a space for it in the previous step!

The wing will be made of a long, curved line curving slightly back towards the tail of the plane. It may look a bit bare at the moment, but you’ll be adding some detail to it a bit later on in this guide.

Step 4 – Draw the other wing and window of the airplane 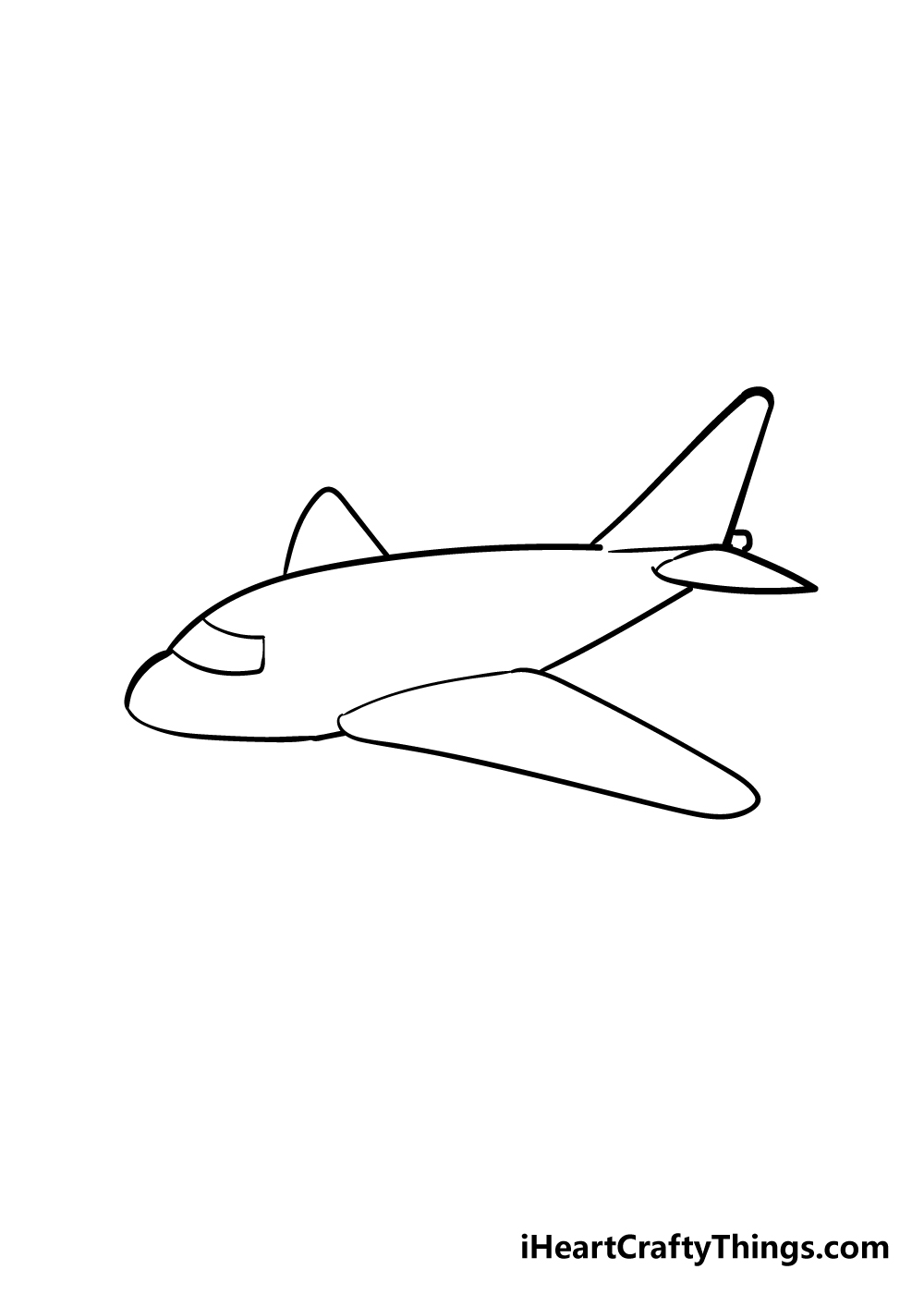 You have one wing for your airplane drawing, so for this step let’s add another one. This one is on the other side and at quite a different angle, so it will have a different shape.

This one will have a more triangular, tortilla chip shape to it. Once you have that, your airplane needs a window so the pilots can see where they’re going!

To do this, simply draw a bent rectangle shape over the cockpit to create a window as it appears in the reference picture.

Step 5 – Next, draw some engines 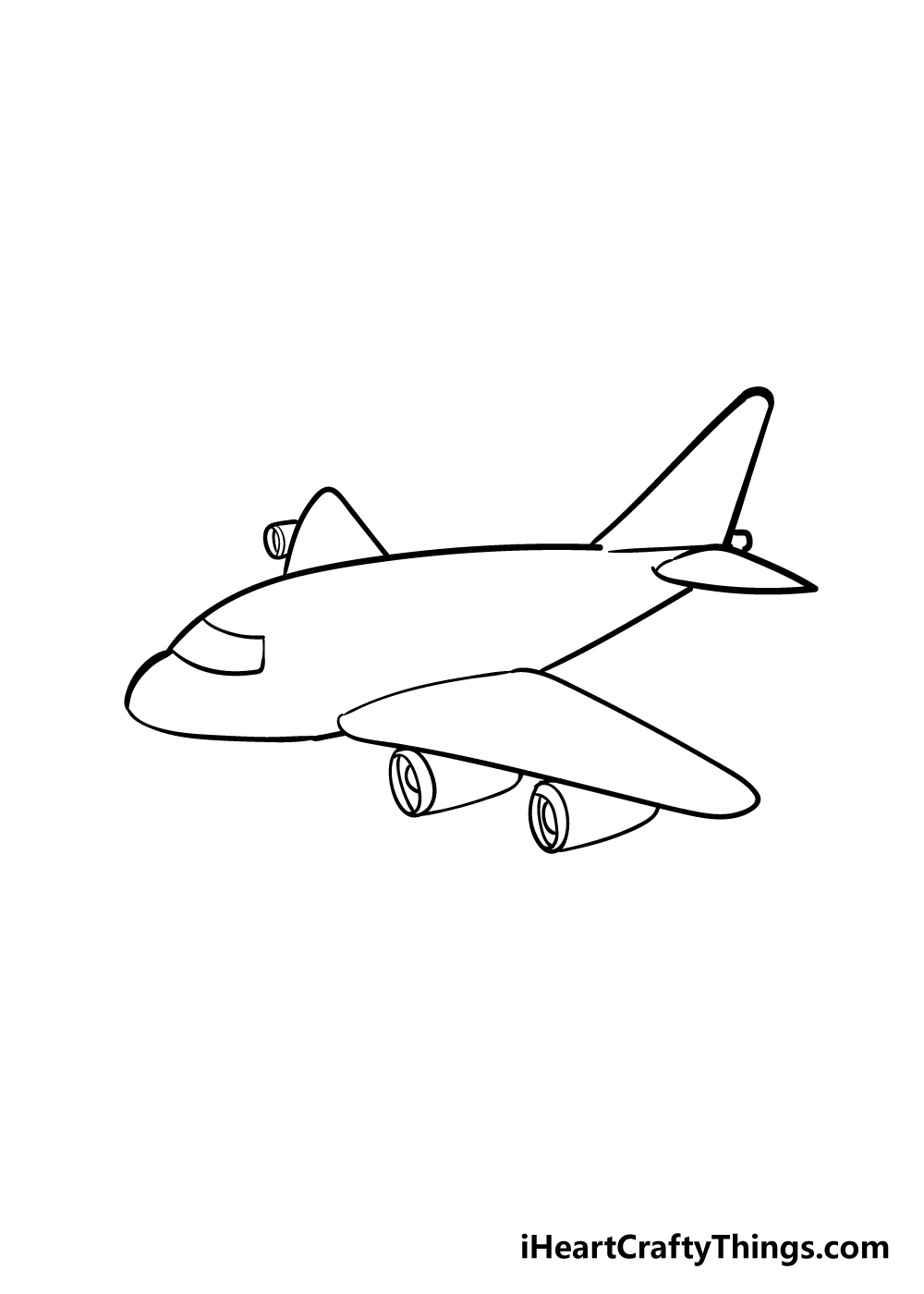 Airplanes wouldn’t get very far without engines to propel them, so we better add some in this step of our guide on how to draw an airplane!

To draw one of these powerful engines, simply draw a long oval shape coming off from the wing.

You can draw the details inside of this circle, and then use a curved line going back to create the body of the engine.

There will be two engines on our right when looking at this picture, and there will be one smaller one on our left. Once you have it looking as it does in the reference picture, you’re ready to proceed!

Step 6 – Draw some final details for your airplane drawing 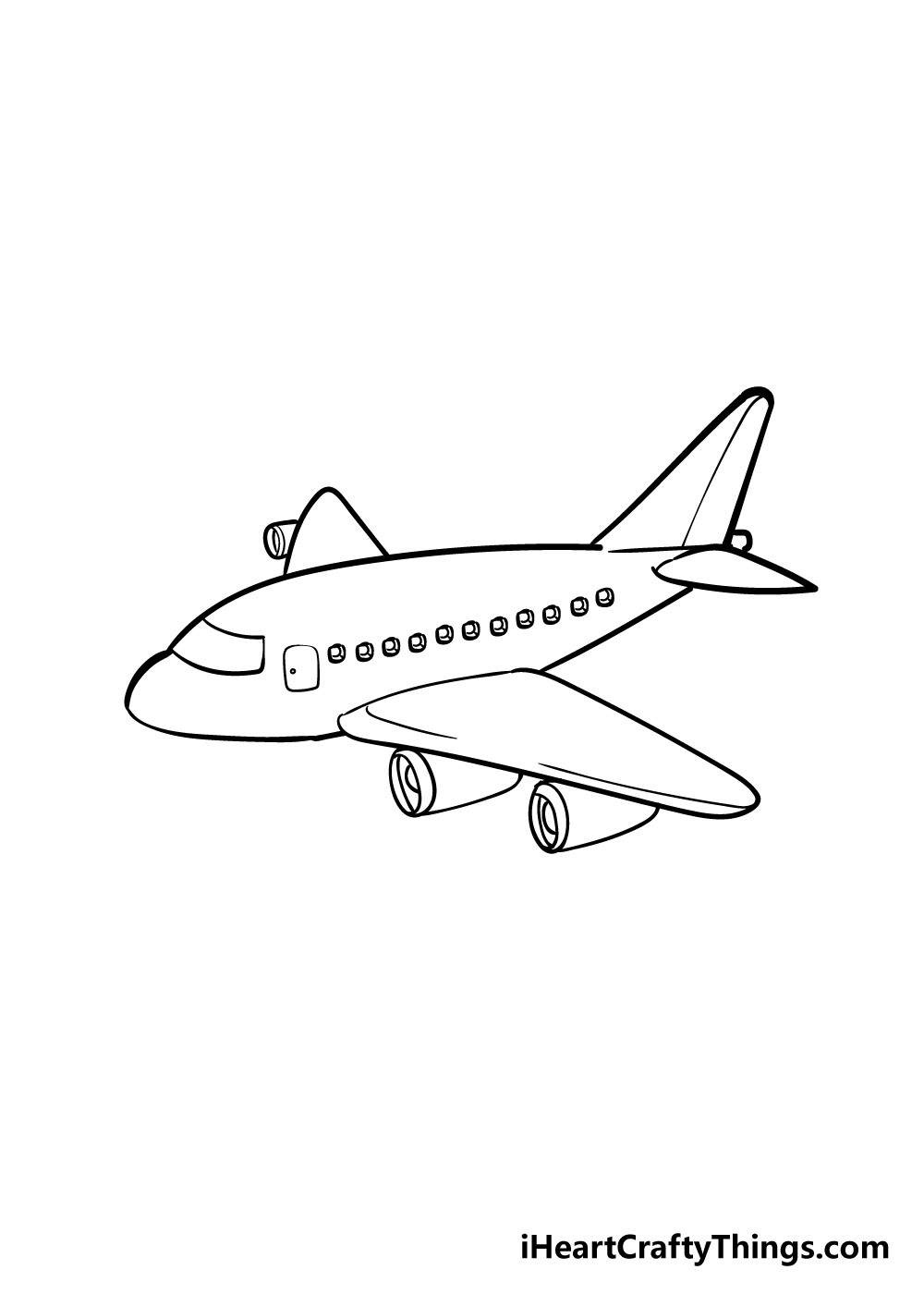 It’s almost time to start coloring in your airplane drawing, but before we get to that, you can draw some final details. We’ve shown you a few details that you could draw.

For example, there are small windows going along the plane and a door behind the cockpit. E also drew some lines along the wing and tail to finish it off.

These are just a few details that you could add, but you should feel free to add any that you like! If you have a favorite aircraft or airline, then you could draw in details that would make your drawing look like that one.

What fun details and extra elements do you think would look good for your airplane? Perhaps you could draw a beautiful background for it!

Step 7 – Finish off your airplane drawing with some color 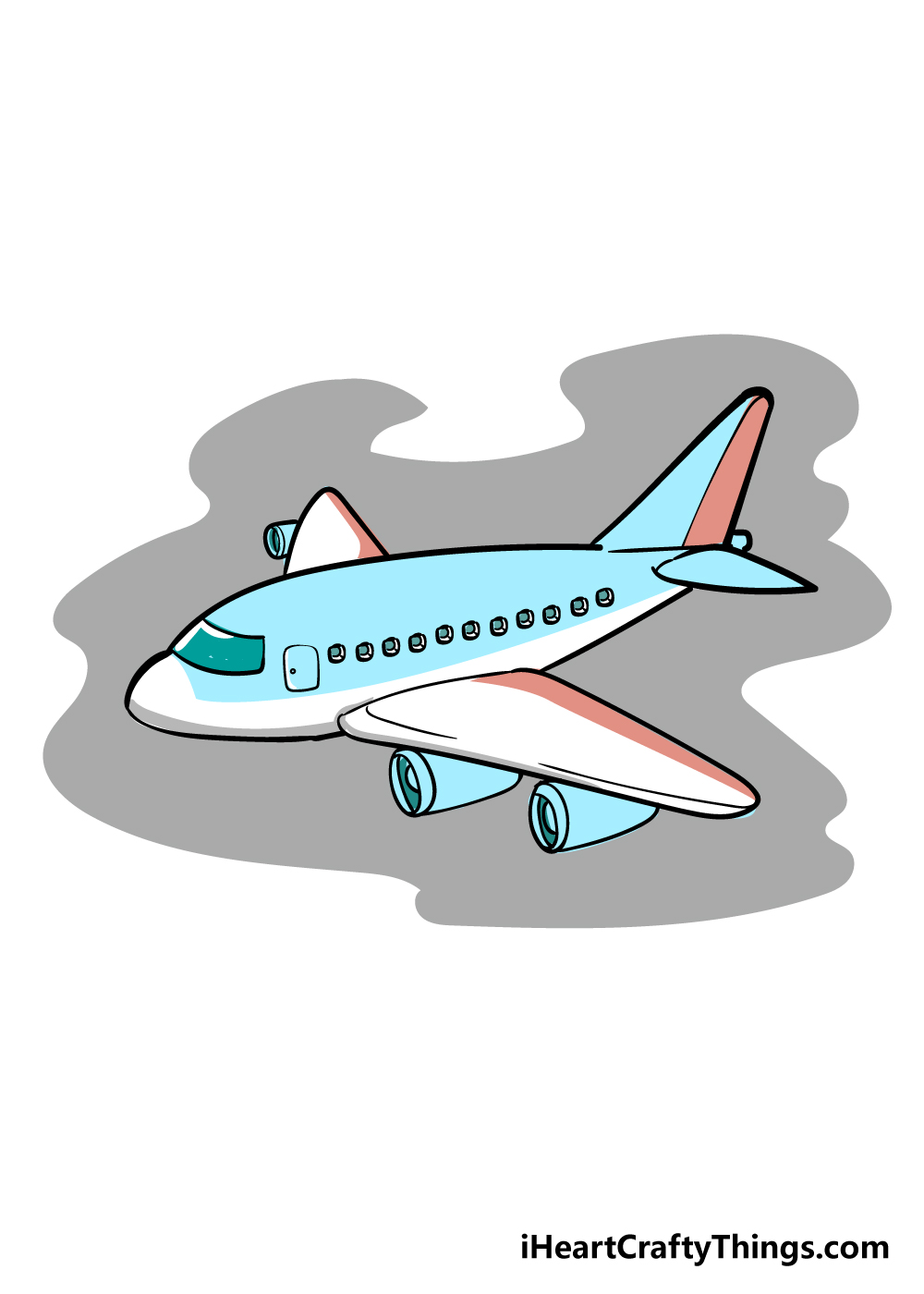 Now that you have finished drawing your airplane and have filled in the final details, you can have some fun coloring in your artwork in this final step of our guide on how to draw an airplane!

We have shown you one way that you could go about coloring in, but this is a step where you can really let your creativity flow.

There are no wrong ways to color in, so you should make it look exactly how you would like.

You could look up pictures of real aircraft for inspiration as well! Then, once you know the colors you would like to use, you can have fun experimenting with some fun art mediums!

You could get some great color clarity with some colored pens and acrylic paints or go for some watercolors and colored pencils for a softer, more vintage look. We can’t wait to see what you come up with!

Your Airplane Drawing is Complete!

That brings us to the end of this guide on how to draw an airplane, and you did a great job!

Drawing an airplane can be frustrating and difficult if you don’t know what to do, so we hope that this guide was both fun and helpful for you to use!

If you break a drawing down into smaller steps, it can make it so much easier to do, so we tried to help you with that in this guide.

Now that you can draw your own airplane, there are ways that you can make this drawing your own. You could use this guide as a template to make your own unique airplane drawing.

You could use some images online to change the design and make your own aircraft!

This isn’t the end of the drawing fun, however, and we will be uploading many more step-by-step guides for you to enjoy on our site! Be sure to check in often to never miss out!

We would love to see your amazing airplane drawing, so please be sure to share it on our Facebook and Pinterest pages for us to enjoy! 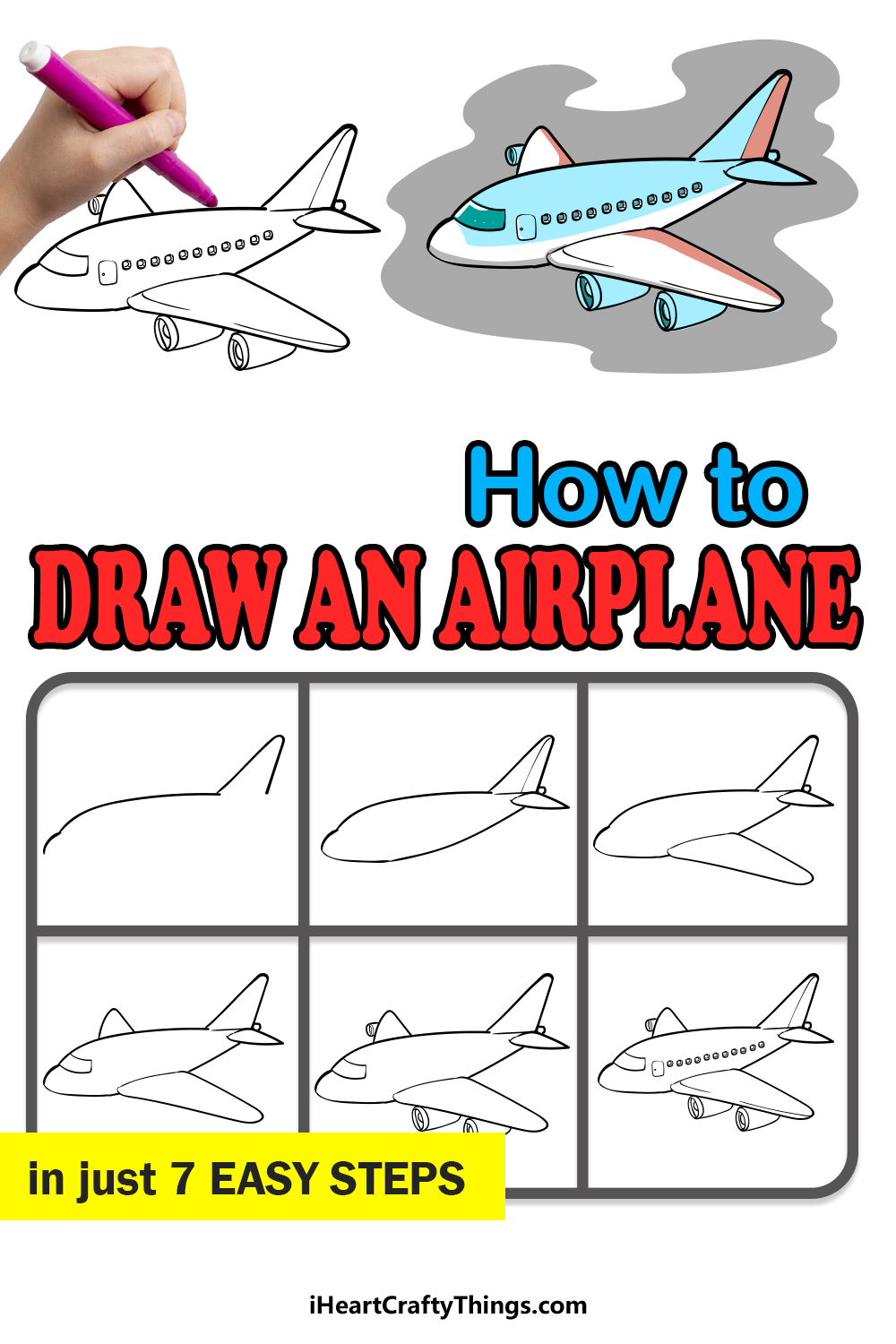 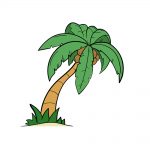 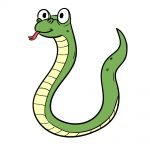