Sharks are a group of elasmobranch fish distinguished by its cartilaginous skeleton, gill slits on the sides of the head, and pectoral fins that aren’t fused to the head.

They primarily feed on smaller fishes and invertebrates, while some larger shark species prey on seals, sea lions, and other marine mammals.

Despite being considered dangerous, sharks are still very fascinating creatures. And this has created a demand for a free shark drawing tutorial. 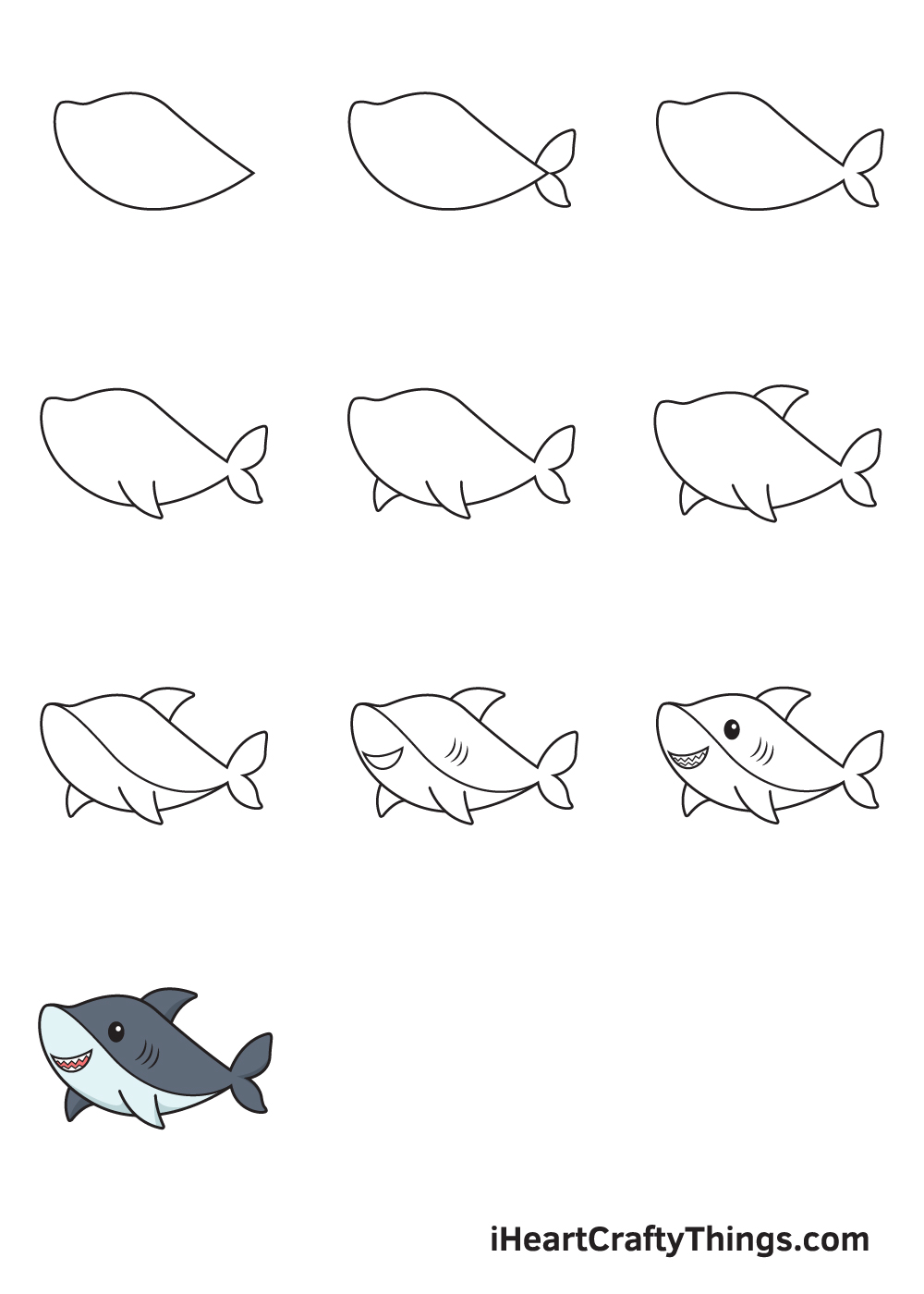 You’ve asked for it, so we delivered. Finally, we’ve curated a step-by-step tutorial on how to draw a shark, made easier with 9 easy steps and simple illustrations.

Go ahead and grab a piece of paper and a pencil and let’s draw together!

How to Draw a Shark – Let’s get started!

Start by drawing a diagonal irregular oval shape with a pointed right edge. There should also be a minimal bump on the opposite end of the shape. This creates the shape of the shark’s body.

When drawing an outline, it’s important to draw with light strokes. Avoid pressing down too hard with your pencil so you can easily get rid of any lines that you might no longer need later on.

To ensure that the shark will be drawn in the center, you can create reference lines by drawing an intersecting horizontal and vertical shape across your paper. The point where the two lines meet marks the spot where you should draw the outline.

Draw two connected leaf-shaped figures to create the tail of the shark. Similar to a leaf, the middle part of these two figures should be rounded while the tip must be pointed.

Feel free to use the illustration shown above to make sure you got it right!

Step 3 – Refine the Shape of the Shark’s Body

Connect the shark’s body and its tail by getting rid of the line overlapping inside the figure.

This makes your drawing look more refined and neat.

Draw a slightly curved V-shaped line on the left bottom side of the shark’s body. This forms one of the pectoral fins of the shark.

Again, take time to remove any overlapping lines from the original outline of the body. Keep your drawing neat and tidy!

Step 5 – Complete Both Pectoral Fins of the Shark

Draw another V-shaped line on the opposite side of the shark’s body.

At this point, both pectoral fins should be fully structured, as shown in the illustration above.

Step 6 – Then, Draw the Dorsal Fin of the Shark

Draw a curved triangular shape at the top of the shark’s body. This forms the dorsal fin of the shark.

Keep in mind that the dorsal fin must be slightly bigger than the shark’s pectoral fins, but not as big as its tail.

Step 7 – Outline the Underside of the Shark’s Body

Draw a curved line across the length of the body of the shark. The line should begin from the mouth of the shark extending all the way to its tail.

This creates a division between the upper part of the shark’s body and its underside.

Step 8 – Add the Gills and the Mouth of the Shark

Draw three parallel horizontal curved lines right above the pectoral fin of the shark. The lines should be on the upper part of the shark’s body, and not on the underside.

This creates the gills, which is what sharks use to breathe underwater, just like any other type of fish.

Step 9 – Now, Add the Sharp Teeth and the Eyes

A shark wouldn’t be complete without a set of sharp, pointed teeth, so that’s exactly what we’ll be drawing in this step.

Simply draw parallel horizontal zigzag lines inside the outline of the mouth that we drew in the previous step. This creates the appearance of the shark’s distinct teeth.

For the eyes, draw a standing oval shape. Then, draw a small circle inside it. Shade the entire space within the oval shape while leaving out the tiny circle unshaded.

There you have it—you’ve successfully drawn a ferocious shark! Now, it’s finally time for the part we’ve all been waiting for, which is choosing the color and coloring the shark!

Though most sharks may look grey, they actually have no standard color. Their colors may appear as either grey, cream, brown, slate, yellow, blue and other neutral colors.

That means, the colors you will be using for your drawing are entirely up to you! Feel free to use a customized set of colors when coloring the shark. After all, it’s your work of art!

Have fun playing with colors and watch as the shark ultimately comes to life!

Here’s how you can make your shark drawing even better…

Create some shark-infested waters as we give you tips for your shark sketch!

When one thinks of a shark, you may immediately think of a big one, like a great white shark.

They can actually come in many shapes and sizes, however, and you could create a specific species for this shark drawing!

You would have a huge amount of different species that you could choose from, and it all depends on your preference.

You can look up different shark species online or in books to help you change the design.

Once you have chosen the design for your drawing of a shark, you could also create a cool background for it. You could show the shark in the ocean or maybe at an awesome aquarium.

Regardless of the setting you choose, you can add lots of details and create all sorts of fun scenes. Maybe the shark could be exploring a sunken ship with some glowing treasure.

What are some other ocean settings you could create for this drawing?

If you used the previous tip we suggested, then you could take it even further by adding some more ocean creatures. You would again have a huge selection of animals to choose from!

These could range from small fish, squids or maybe an octopus to larger ones like whales or an orca. Maybe you could even draw a diver that has been unlucky enough to encounter this shark!

You could draw these extra creatures in a similar cartoon style or make them look more realistic.

In the same way that sharks come in many shapes and sizes, they can also be found in many incredible colors and patterns. That opens up so many possibilities for your shark sketch!

Some have more muted color schemes while others even have stripes and other patterns of color on their bodies.

When adding these colors, be sure to try out all of your favorite art tools and techniques to create some interesting color combinations. What will you choose to finish off your artwork?

Your Shark Drawing is Complete!

We hope you enjoy this step-by-step shark drawing tutorial. It doesn’t matter if you’re a beginner or an expert in drawing. With the help of this comprehensive guide, anyone can draw a majestic shark in no time!

We are regularly updating our “How to Draw” catalog and uploading new drawing tutorials, so don’t forget to keep checking back to continuously learn how to draw something new.

Remember, all of our guides are completely free for you to use as learning materials.

As soon as you finish drawing and coloring a shark, take a picture of your artwork and share it on our Facebook page and on Pinterest.

Don’t be embarrassed to share your drawing! You’ve worked hard for it, so we’re sure it looks impressive!

We can’t wait to see your magnificent shark drawing! 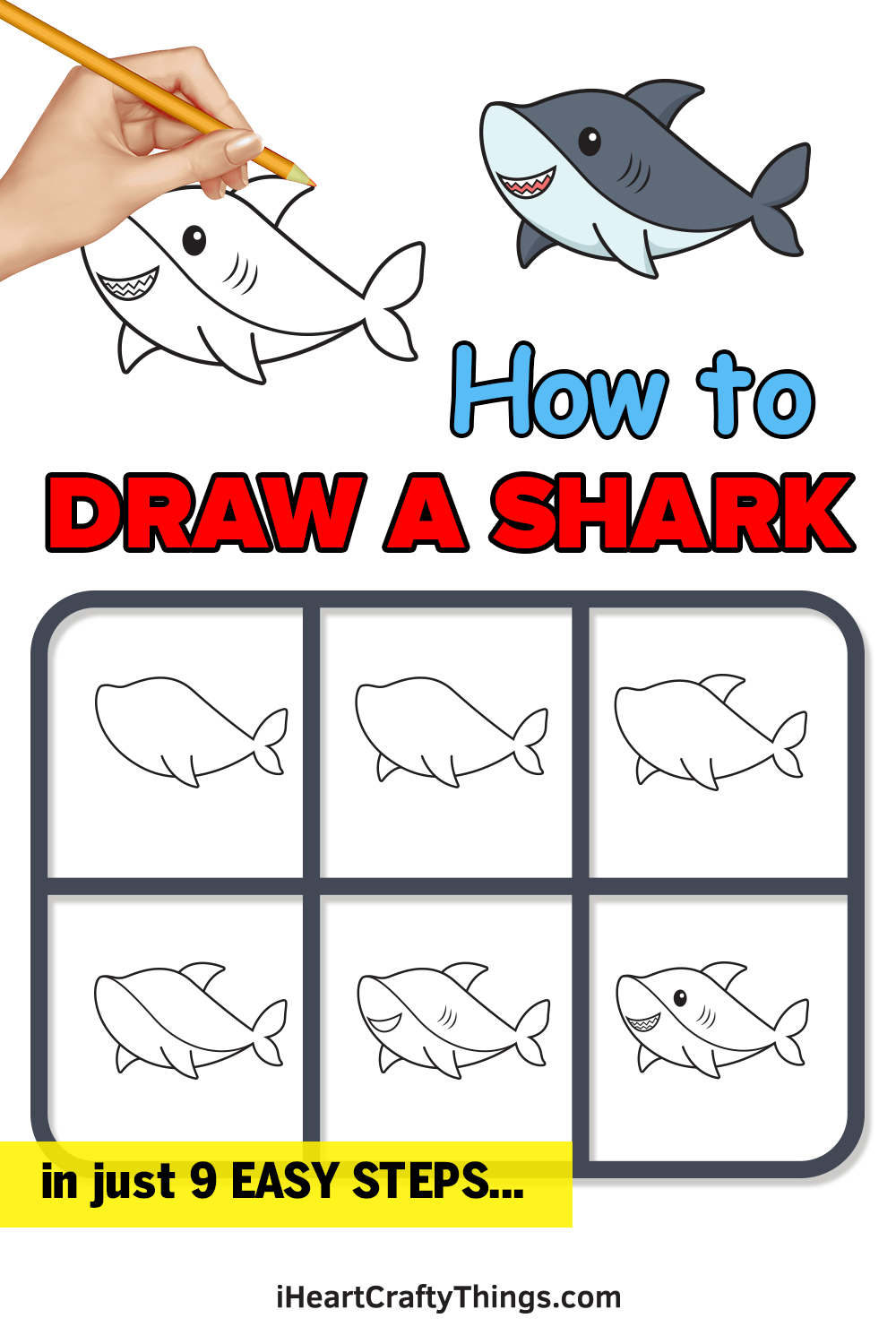 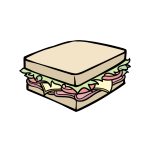 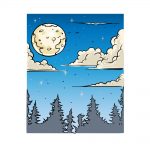