The pyramid is a structure with triangular outer surfaces that converge to a single point at the top.

Though the pyramid has a pyramid geometric shape, its base can be trilateral, quadrilateral, or any polygon shape.

When we think of pyramids, the Great Pyramid of Giza is often what comes to our minds first. It’s no surprise as it was actually one of the most iconic pyramids in the world, securing a spot in the Seven Wonders of the Ancient World.

Though seeing the Great Pyramid of Giza in real life may only be a dream, you can always draw a pyramid so you can look at it at the comfort of your home!

We have created a step-by-step tutorial on how to draw a pyramid, summarized in 9 easy instructions and simple illustrations.

Have fun creating your very own unique pyramid! 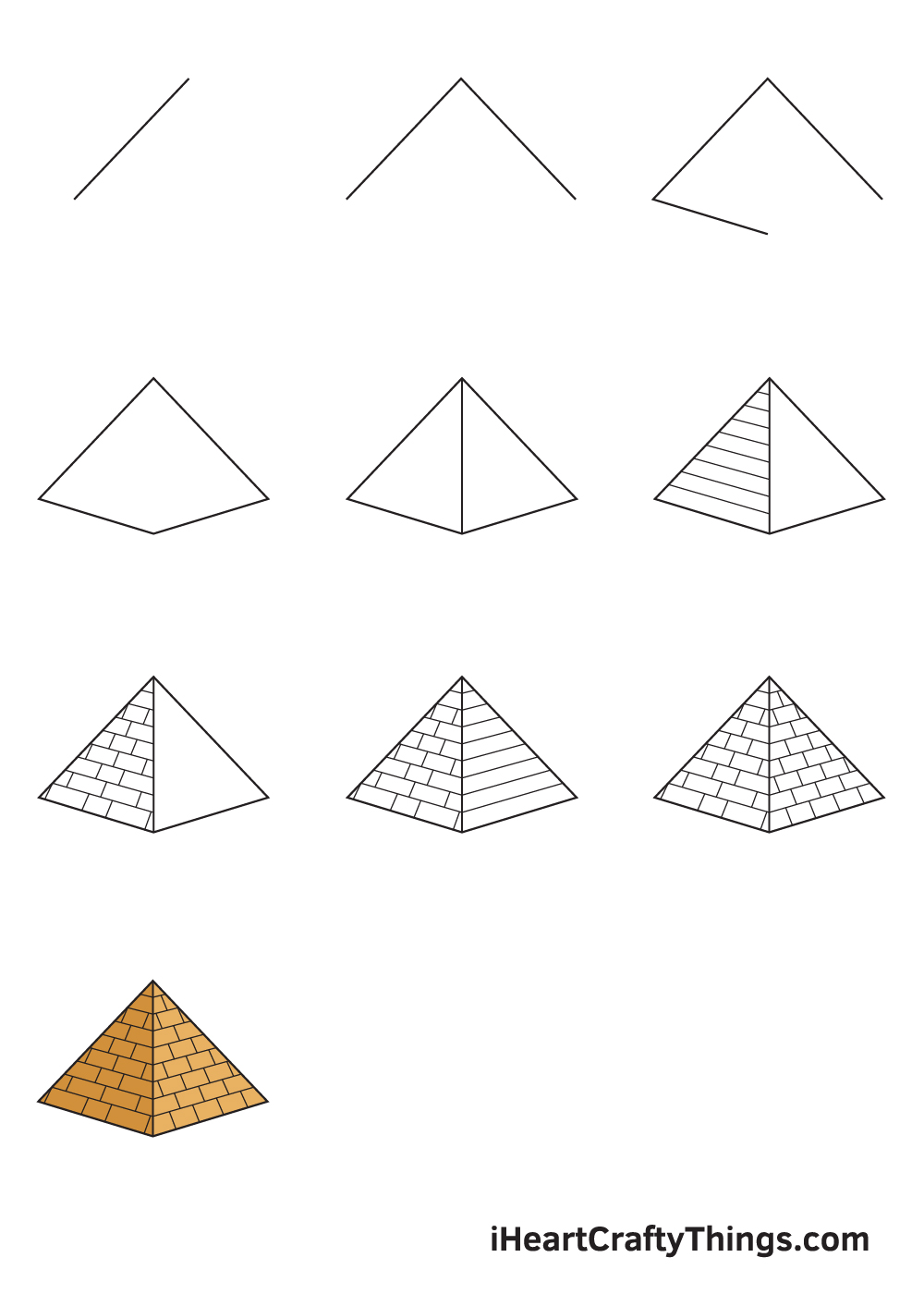 How to Draw a Pyramid – Let’s get started!

Drawing a pyramid is mainly dependent on straight lines. So, feel free to use a ruler every step of the way to help you draw straight lines quickly and easily.

Step 2 – Outline the Top Part of the Pyramid

From the top endpoint of the diagonal line that we drew previously, draw a downward diagonal line heading to the right side. This forms the top portion of the pyramid.

When drawn correctly, this should form an inverted V-shaped line, as shown in the illustration above.

Step 3 – Draw the Left Bottom Part of the Pyramid

Keep in mind that the endpoint of this line should be aligned with the point at the top where the two diagonal lines meet.

Step 4 – Complete the Shape of the Pyramid

Finalize the shape of the pyramid by filling in the blank space of the outline. Simply draw another diagonal line connecting the endpoints of the lower left diagonal line and the upper right diagonal line.

At this point, the outline or the shape of the pyramid should now be complete.

Step 5 – Then, Draw the Dimension of the Pyramid

Draw a vertical line in the middle of the outline of the pyramid. This creates the illusion of dimensions in the pyramid. Now, the pyramid looks three-dimensional and realistic!

Bear in mind that this line should begin from the pointed arch at the top extending all the way down to the point in the bottom middle of the pyramid.

Step 6 – Next, Draw the Patterns on the Left Side

Remember, all of these horizontal lines must be parallel to each other.

Step 7 – Finalize the Patterns on the Left Side

Draw multiple short vertical lines within the horizontal spaces on the left side of the pyramid.

The vertical line should be drawn alternately, as seen in the illustration above, to create the distinct patterns quite similar to bricks.

Step 8 – Afterwards, Add Patterns on the Right Side

After completing the patterns on the left side, we will now be moving on to the opposite side.

Step 9 – Now, Complete the Patterns on the Right Side

Finalize the patterns of the pyramid by drawing alternate vertical lines within the horizontal spaces. This should form a pattern similar to the left side of the pyramid.

As you can see, the pyramid drawing is complete at last. Now, all it’s missing is a dash of colors to make the pyramid vibrant and colorful!

There you have it—we have successfully drawn a pyramid! Now, it’s finally time for the most exciting part, which is choosing the colors and coloring the pyramid!

Traditionally, the pyramids were covered in slabs of highly polished, sparkling white limestone. However, as they age, their colors may change over time.

The colors you will be using for the pyramid is entirely up to you! Feel free to opt for any color you like or use more than one color to create a unique, multi-colored pyramid!

Have fun playing with colors and watch as the pyramid ultimately comes to life!

Unravel the secrets of this ancient structure as we make this easy to draw pyramid even easier!

We styled this pyramid drawing to look like one of the pyramids in Egypt. That means that there are individual brick details covering the surface.

These look great, but they can make the drawing a lot more intimidating! If you’re having a hard time with this drawing, you could make it easier by removing these details.

This way, you can focus on the structure of the pyramid itself. Then, once you have mastered the structure, you can then add the bricks and other details to future attempts!

Even after you have removed details, this pyramid sketch can still be a challenge. Or, maybe the bricks were not what was giving you trouble!

If this is the case, then using a real object can be very helpful. Unfortunately, not many objects in our day-to-day lives come in a pyramid shape, but you can still get around it!

For instance, if you go to a toy store you may find simple blocks that are in a pyramid shape. Otherwise, you can sometimes find packaging for fancy candy boxes that are shaped like a pyramid.

If all else fails, you could ask your parents to go to a carpenter and ask them to make you a pyramid block. However you do it, having a physical object to draw from can make it so much easier!

If you’re still struggling with this drawing of a pyramid, don’t give up! You don’t have to get a drawing right on the first try, and you can practice in other ways.

Instead of drawing the pyramid as it’s shown in our guide, you could focus on drawing just one side. This would require that you draw a more standard triangle.

Try to draw these triangles at different angles, using the guide to help you. Then you can work on adding the different sides of the pyramid.

Looking at photos of the pyramids of Giza from different angles would also help a lot!

Your Pyramid Drawing is Complete!

Hopefully, you had a wonderful time with this step-by-step pyramid drawing tutorial. If you had fun drawing a pyramid, perhaps you might be interested in drawing the famous Eiffel Tower too! Check out our “How to Draw” catalog to explore many more exciting drawing tutorials like this!

Once you’ve finished drawing and coloring the pyramid, don’t forget to take a photo of your artwork! Then, share it on our Facebook page and on Pinterest. Don’t be shy! You should be proud of yourself for completing an impressive masterpiece! 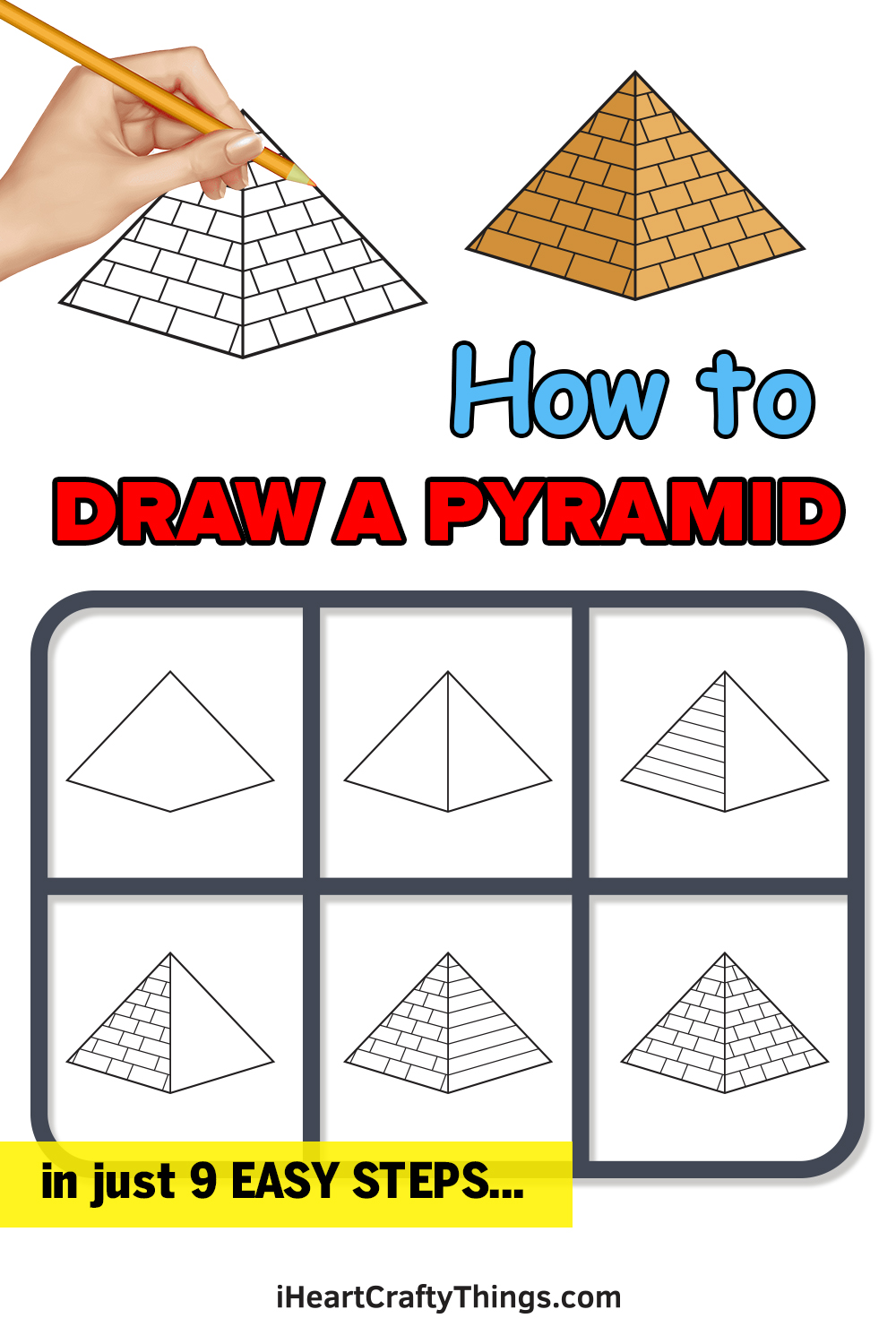 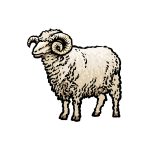 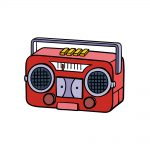