Paw prints are marks made by paws or feet of certain animals like dogs, cats, or a bear. If you have a pet, then you’re surely familiar with this distinct print in the form of a paw.

Nowadays, paw prints are being used as a design and can be seen on shirts, bags, and many more! Turns out, a paw print can also be an art! This has resulted in a huge demand for a free paw print drawing tutorial.

To fulfill our reader’s wishes, we have created a step-by-step tutorial on how to draw a paw print.

This guide consists of 9 easy instructions, all of which come with simple illustrations that serve as your visual guide as you follow the steps one by one. 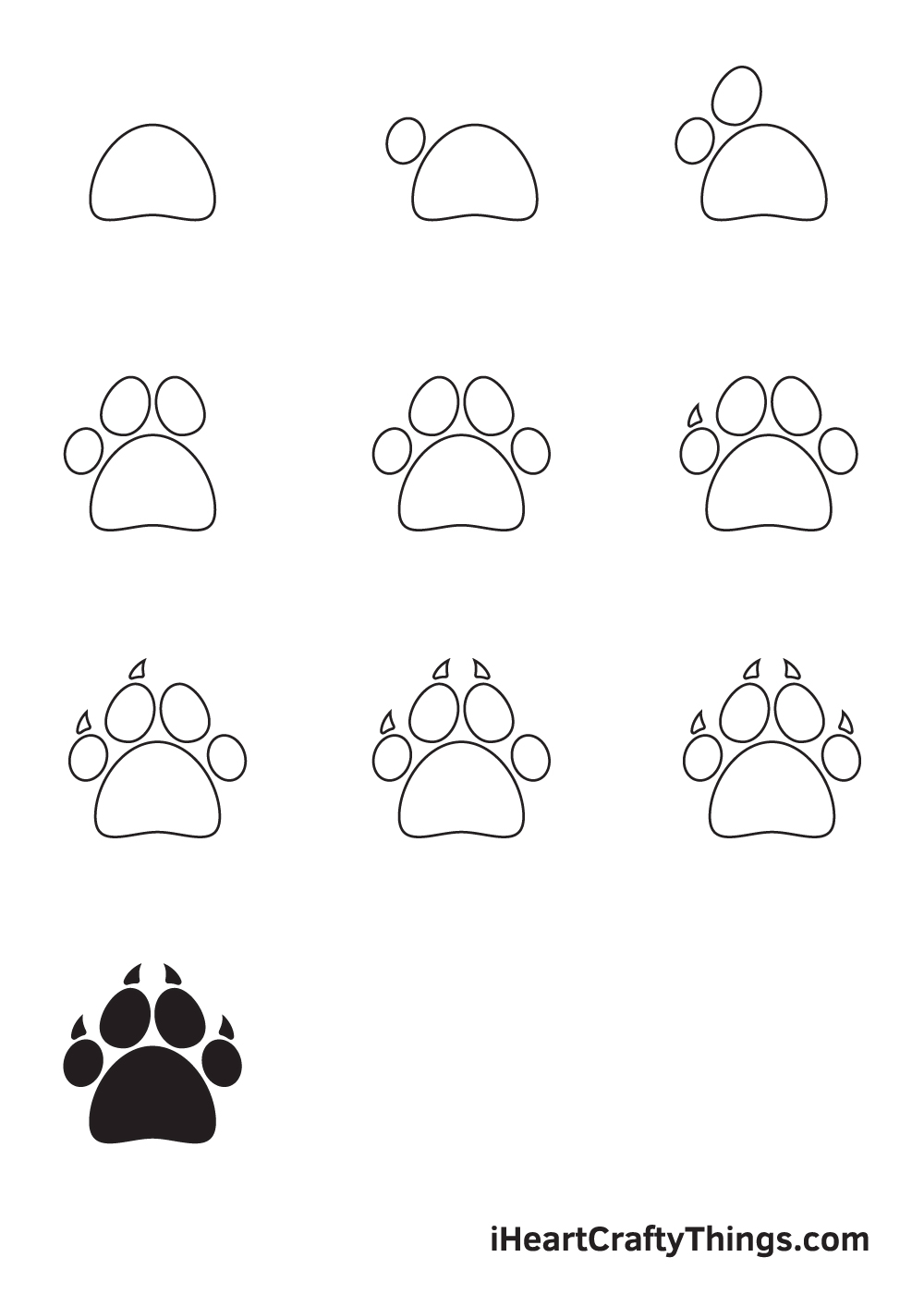 How to Draw a Paw Print — Let’s get started!

Start by drawing a downward curved line on the bottom portion of your paper. Then, close off the figure by drawing an uneven horizontal line with a bump in the middle at the bottom of the curved line. This forms the metacarpal pad, which is the largest pad in the paw print.

Keep in mind that all three corner edges of the metacarpal pad should be curved, as shown in the illustration above.

Remember, beginning at the bottom of your paper ensures that there’s sufficient space for the pads on the upper part of the paw print.

Step 2 — Draw the First Digital Pad of the Paw

Draw a diagonal oval shape on the left side above the metacarpal pad. This forms the first digital pad of the paw print, which is located on the leftmost side.

Take note: the digital pad shouldn’t be directly touching the metacarpal pad. There should be a slight gap in between the two, similar to the illustration above.

Draw a bigger oval shape beside the one we drew in the previous step. This forms the second digital pad of the paw print, which should be located right beside the first one.

Don’t worry if the shapes of the digital pads aren’t perfect! They don’t necessarily have to be. As a matter of fact, the more uneven they are, the more realistic they look!

Step 4 — Draw the Third Digital Pad of the Paw

Repeat the previous step to create the third digital pad, which should be as big as the second one.

At this point, you should now have three digital pads, and only one more is missing.

Step 5 — Complete All Four Pads of the Paw

Draw a smaller oval shape similar to the size of the first digital pad we drew previously in the second step. This forms the fourth—and the last—digital pad of the paw print situated on the rightmost side.

After finishing this step, all four digital pads of the paw print should now be complete. We’re almost done—keep going!

Step 6 — Add the Claw of the Leftmost Pad

Draw a slightly curved triangle shape above the first digital pad on the leftmost side. This forms its sharp, pointed claw—one of the paw print’s most distinct features!

Make sure that the digital pad and its claw aren’t touching. There should be a small gap in between the two, as shown in the illustration above.

Step 7 — Draw the Claw of the Second Pad

Repeat the previous step above the next digital pad.

This forms the claw of the second digital pad in the paw print.

Moving forward to the third digital pad, draw a similar figure above it to create its claw.

Look at those sharp, pointed claws, you definitely wouldn’t want to mess with it, would you?

Step 9 — Complete the Claws on All Four Pads

Draw another triangular shape above the digital pad on the rightmost side.

At this point, all four digital pads of the paw print should now have claws. This completes your paw print drawing. Now, all it’s missing is a splash of colors to make it colorful!

There you have it—you have successfully drawn a paw print. That means, it’s finally time for the most exciting part, which is coloring the paw print!

As you can see in the illustrations, we’ve kept the colors plain and simple. We colored the entire paw print with black to make it as realistic as possible!

You can choose to color the paw print with the same color we used or opt for a different color. You can even use more than one color to create a multi-colored paw print. How fun is that?!

Have fun playing with colors! We’re sure the colors will turn out beautifully!

Your Paw Print Drawing is Complete!

Check out our catalog to explore drawing tutorials of various animals that may look best with a paw print!

Once you’re done drawing and coloring a paw print, you should feel proud of yourself for completing a masterpiece! Don’t forget to take a photo of your artwork and share it on our Facebook page and Pinterest. 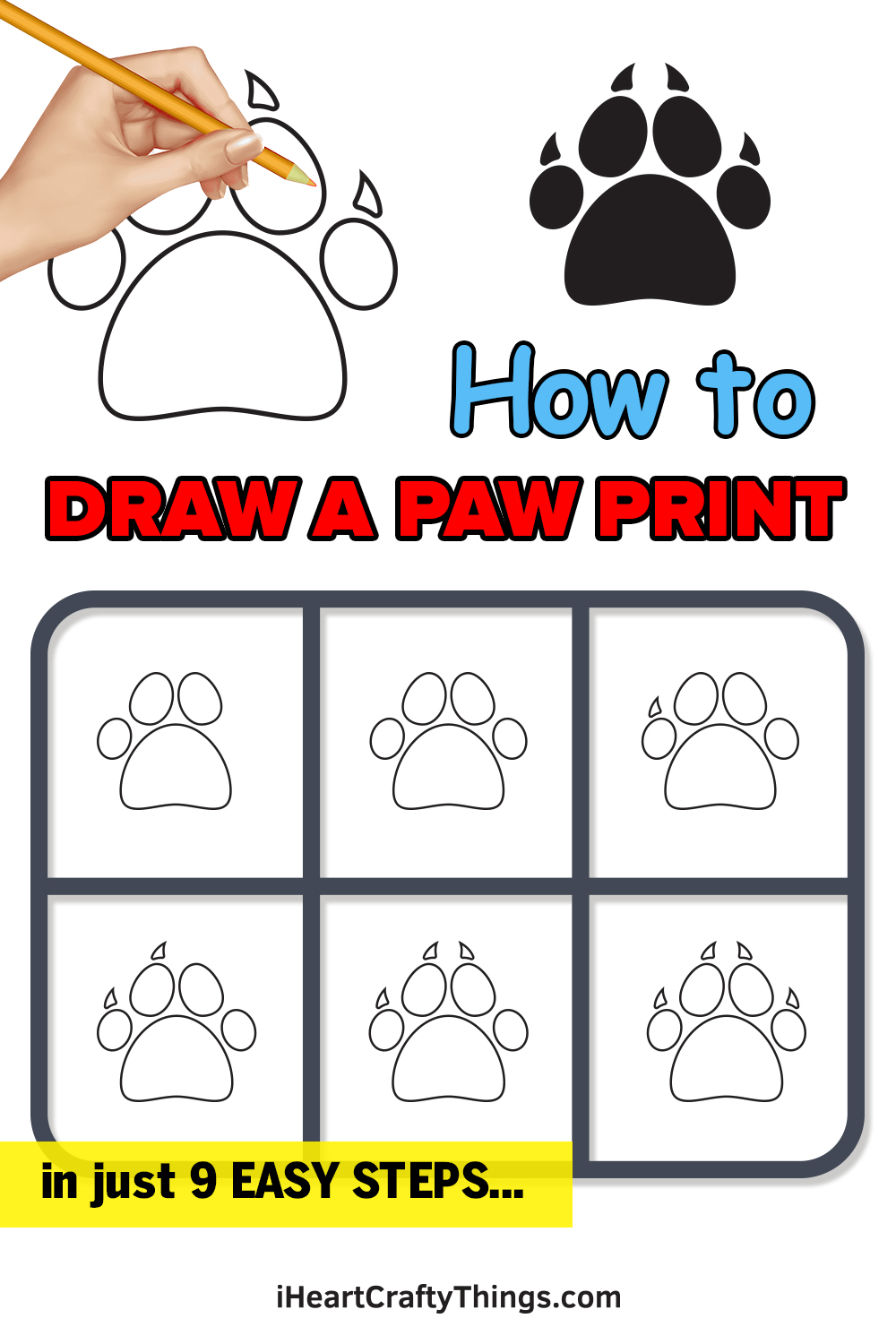