Music notes are different kinds of symbols denoting specific musical sounds. Notes represent both the pitch and duration of a sound in musical notation.

If you’re passionate about music, then it’s essential that you learn how to draw music notes.

Fortunately, we have created a step-by-step tutorial on how to draw music notes, summed up in 9 quick and easy steps. 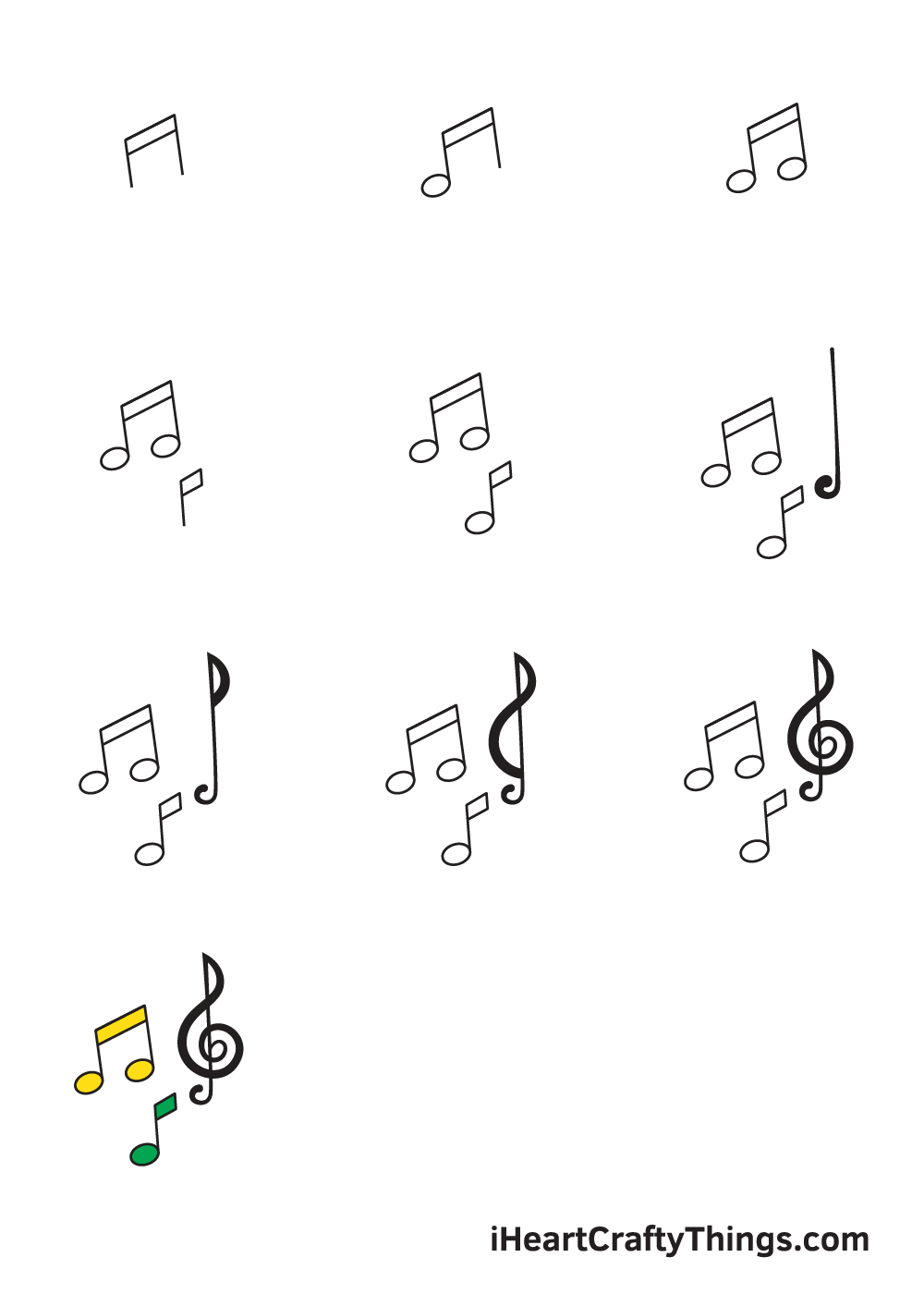 In this tutorial, we’ll be learning how to draw three kinds of music symbols: a beam note, a quaver, and a treble clef respectively.

How to Draw Music Notes — Let’s get started!

Start by drawing the first music symbol, which is the beam note. A beam note is essentially two consecutive quaver notes combined in one symbol.

Step 2 — Draw the First Symbol of the Beam Note

Draw a sideways oval shape on the left side of the left vertical line we drew in the previous step. This forms the left quaver symbol of the beam note.

The oval shape should be directly attached at the bottom of the left vertical line to form a quaver note, as shown in the illustration.

Step 3 — Now, Finalize the Form of the Beam Note

After completing this step, you should now have two connected quaver notes, thus completing the form of the first music symbol in your drawing—the beam note.

Step 4 — Then, Draw the Flag of the Quaver Note

Moving on to the second symbol, which is the quaver note, continue by drawing a vertical line below the beam note. This line serves as the stem of the quaver note.

Afterwards, draw a diagonal rectangle shape on the upper right side directly connected to the stem. This forms the flag of the quaver note.

Step 5 — Next, Draw the Head of the Quaver Note

To complete the quaver note, simply draw a sideways oval shape at the bottom left side of the stem that we drew in the previous step.

At this point, the form of the quaver note should be complete. And there you have it—you have successfully finished drawing the second music symbol. We’re almost done, so keep going!

Step 6 — Draw the Straight Line of the Treble Clef

Now, we’ll be working on the third and the last music symbol in our drawing, which is the treble clef.

Draw a vertical line with a spiral bottom endpoint. This creates the stem of the treble clef. Remember, the lines forming the treble clef should be relatively thicker compared to the lines shaping the other music symbols.

Step 7 — Draw a Small Curve on the Right Side

Continue by drawing a curved line at the top of the treble clef’s stem.

Keep in mind that the top part of the treble clef should be pointed, as shown in the illustration above.

Step 8 — Next, Draw the S-Shaped Line of the Clef

Extend the lines of the curved line by drawing a relatively bigger curve on the opposite side of the bottom of the stem.

When drawn correctly, the entire curved line should nearly form a letter “S”

Step 9 — Complete the Form of the Treble Clef

Draw a spiral beginning from the bottom endpoint of the S-shaped curve we drew in the previous step.

Now that we’ve successfully drawn three musical symbols, it’s time for the part you’ve probably been waiting for the most. In this step, we will now be adding colors on the music symbols!

As you can see in the illustration, we kept the colors of the music symbols pretty simple. We used color yellow for the beam note and color green for the quaver note.

The treble clef, on the other hand, doesn’t have any color because the lines were bold and pitch-black.

What’s fun about this step is that you can handpick a unique set of colors and color the music symbols however you like! You can even make them multi-colored if you want to—it’s all up to you!

Have fun playing with colors and make the music notes vibrant and colorful!

Your Music Notes Drawing is Complete!

Now that you’re capable of drawing three kinds of music symbols, you can incorporate this on more complex drawings in the future.

Perhaps you can draw a character playing a musical instrument with various music notes surrounding the image next?

Perhaps you can draw musical notes on a staff to compose your very own music? That would be so cool!

Once you’ve finished drawing and coloring the music notes, don’t forget to show off your masterpiece!

Take a picture of your artwork and share it on our Facebook page and on Pinterest. Don’t hesitate to share your work of art. You’ve worked hard for it, so we can already tell that it looks incredible for sure!

We can’t wait to see your wonderful music notes drawing! 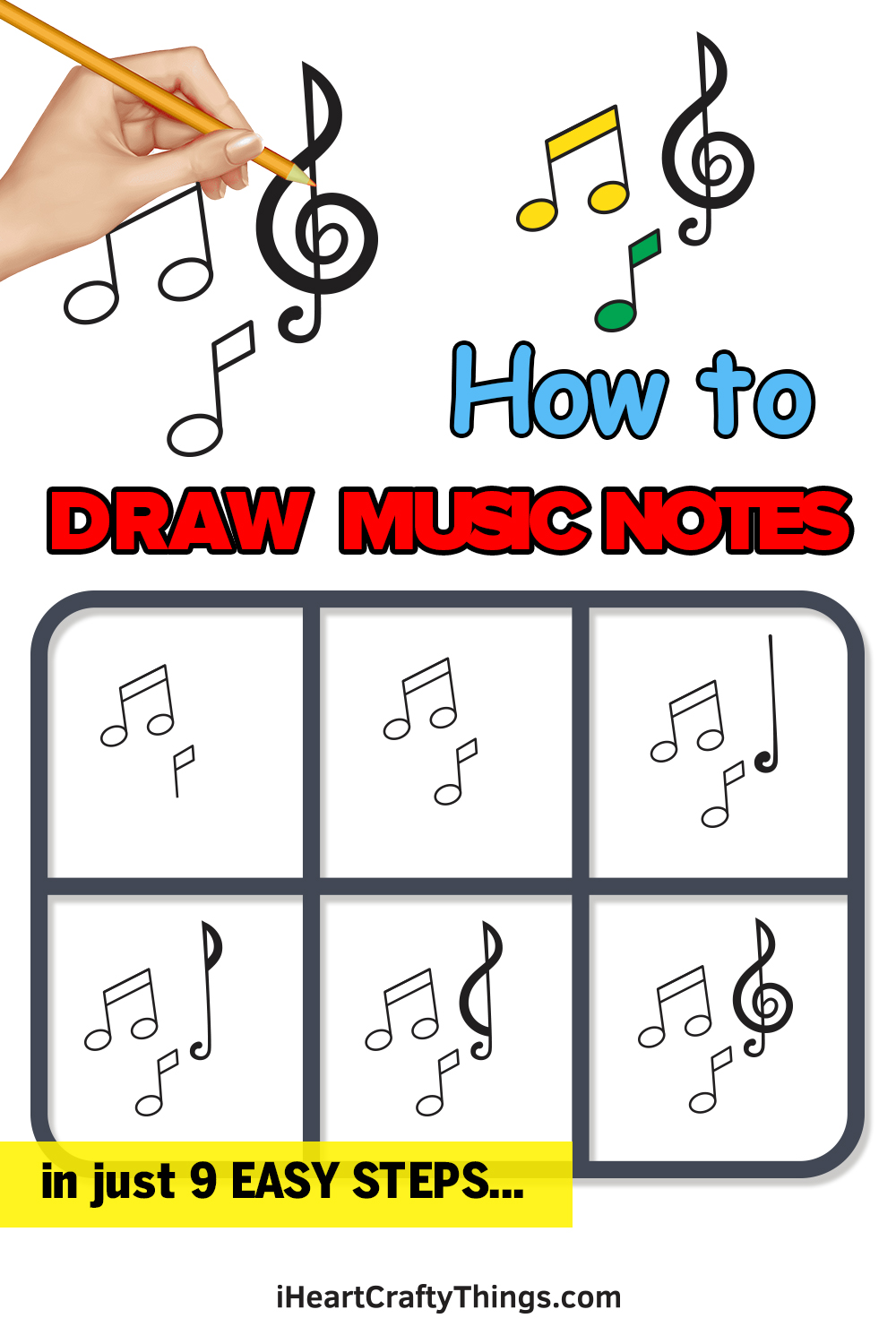