Harry Potter, the protagonist in the best-selling book series by author J.K. Rowling, is an iconic character that is loved by many people of all ages.

In fact, when we think of witchcraft and wizardry, Harry Potter is automatically the first person that comes to mind.

The popularity of Harry Potter is what made this tutorial highly-requested. You asked for it, so we delivered.

Finally, we have curated a step-by-step tutorial on how to draw Harry Potter summarized in 9 easy and simple steps.

You can apply these steps whether you want to draw a realistic-looking Harry Potter character or an animated one. 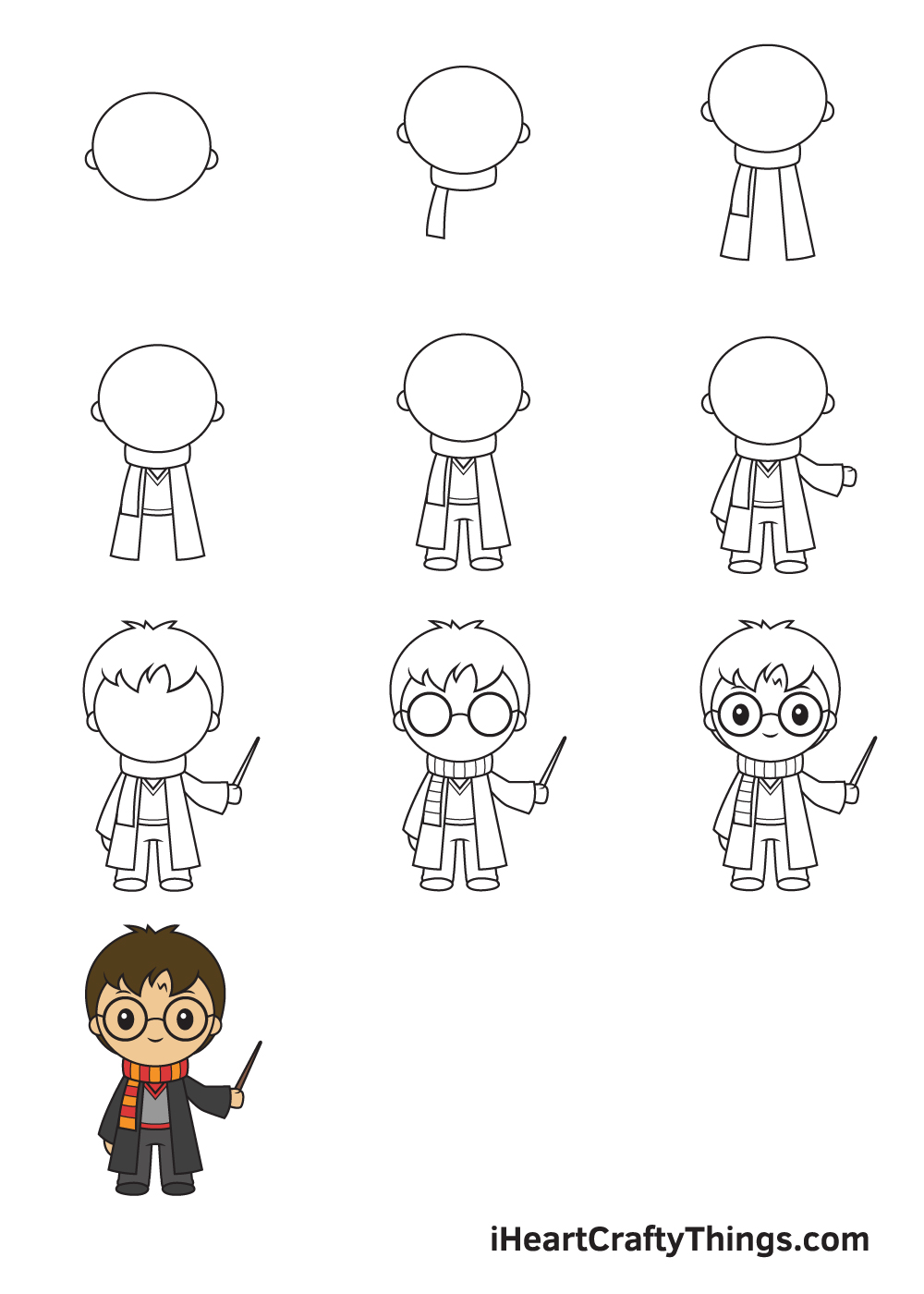 Each step is accompanied with comprehensible illustrations that serve as your visual guide as you follow the instructions.

Whether you are a novice or an expert in drawing, we’re sure you can follow these steps effortlessly. What’s more, you can add your own style and improvise in every step.

Feel free to mix and match colors to customize your artwork and make it unique. Let your imagination wander and unleash your creativity.

How to Draw Harry Potter – Let’s get started!

Starting in the middle of your paper, draw a wide irregular circle to create the outline of Harry Potter’s face. Keep in mind that the length of the circle must be relatively wider than its height. Then, draw two curved lines on both sides of the face to form the ears.

Here’s a useful tip: in order to ensure that Harry Potter’s face will be drawn in the middle, you can draw a horizontal and a vertical line across the paper to be used as reference lines.

Right underneath the face, draw two curved vertical lines that are nearly an inch apart. This outlines the sides of the scarf. Then, draw a slightly upward curve with both of its ends connected to the vertical lines.

Now that we have drawn the outline of the scarf, it’s time to draw the dangling end of the scarf to make it appear more realistic. Starting from the left side of the scarf, draw another two parallel slightly curved vertical lines with a straight horizontal line connecting both ends.

Don’t hesitate to customize the scarf however you like! You can even draw patterns and designs on the scarf to make it more fun!

On both sides of the scarf, draw two parallel vertical lines with a straight horizontal line connecting both ends. When drawn correctly, it should look like a relatively bigger version of the shape we have drawn for the dangling end of the scarf in the previous step.

Don’t forget to do this step on both the left and right side of the scarf. This outlines the front part of Harry Potter’s coat.

Underneath the scarf and in between the opening of the coat, draw two wide “V” lines with one on top of the other. The line at the top should be relatively thicker than the one at the bottom. This outlines the collar of the shirt.

Afterwards, draw two parallel horizontal lines below the “V” lines we have drawn just now. Similar to the “V” line, the line at the top must be thicker than the one at the bottom. This outlines the hem of the shirt.

Now that we have finished drawing the top, it’s time to draw the bottoms and the shoes to complete the look!

Below the top, draw a pair of trousers by drawing a shape that is similar to how we have drawn the coat in the third step. The pant leg must be slightly apart from each other.

Then, right underneath each pant leg, draw a sideways oval shape to outline the shoes.

On both sides of the body, draw the long sleeves of the coat with a pair of hands slightly visible at the end of each sleeve.

As you can see in this illustration, one hand is still on the side of the body while the other one is raised. You can opt to follow this illustration or position the arms however you like. Either way, we’re sure your Harry Potter drawing will look just as amazing!

Draw the hair right over the top of the head. Then, draw pointed clumps of hair near the forehead.

Now, let’s move on to drawing the magical wand. From the fist of the raised hand, draw a pointed stick to create the wand. It should look like Harry Potter is holding the wand as his hands are raised.

Below the eyebrows, draw two massive perfect circles. Then, connect the two circles together by drawing a line in between the lens.

Don’t forget to make the outline of the circle thicker to make the eyeglasses appear more realistic.

Within the glasses we have drawn in the previous step, draw an upright oval shape inside each glass lens to create the eyes. Afterwards, shade the inside of the eyes while leaving out a tiny dot unshaded to create a “gleaming eyes” effect.

And there you have it; you have successfully drawn the legendary character Harry Potter. Now, all it’s missing is a splash of vivid and vibrant colors to finally complete your artwork!

Finally, here is the most exciting part—filling in the colors for your awesome drawing! This is the part where you can show off your artistic skills and your ability to mix and match various colors.

Harry Potter originally has jet-black hair. He usually wears the traditional Hogwarts school uniform, which is black long coat, and gray top paired with black trousers. The scarf he typically wears is a combination of yellow and red in color, signifying his house Gryffindor.

Feel free to color Harry Potter however you like and use any colors you prefer! And while you’re at it, why not try experimenting with different coloring materials as well?

5 Tips To Make Your Harry Potter Drawing Even Better!

Make your Harry Potter drawing even more magical with these fun tips!

The Harry Potter series is all about magic, so we think you can make this drawing look even better with some magic effects.

Using some colors and wavy lines, you could draw all sorts of cool magic spells around his wand! If you have specific spells you like, you could show them in this Harry Potter sketch. What are some spells you could use here?

Harry is almost always seen with his two best friends Ron and Hermione. You could draw them beside him to finish off the trio! You can find some pictures of these characters, follow the guide and change some of the details. This way, you can create his friends in the same style he is drawn in.

There are many iconic locations in the series, from Hogwarts to Hogsmeade, Diagon Alley and more.

You could create a stunning background for this Harry Potter drawing by recreating one of these iconic locales.

If you need some references, you could freeze frames from the movies to use to help you. What are some locations you would like for this image?

We love the style used for this drawing of Harry Potter, but you could also change a few things! For example, you could change the proportions of his body to make him look a bit more realistic.

Or, you could draw him in a different position, and maybe have him in an action pose. He could be casting a spell, facing off an enemy or hanging out with his friends for a few ideas.

Lastly, you would be surprised how much color can make this Harry Potter sketch even better! In our guide, we used a more muted color scheme that recreates his look in the books and movies.

If you want to change up some of the colors or give them a different intensity, you definitely should do so! Maybe try out some unusual art tools or mediums to make the colors even more interesting.

Your Harry Potter Drawing is Complete!

We hope you enjoy this step-by-step tutorial on how to draw Harry Potter. With this guide, you can surely draw and color Harry Potter along with its complex features and elaborate details in no time.

And the most fun part is, you can customize its features and play with various colors as much as you like!

Once you’ve finished your masterpiece, we’re certain you must be feeling very proud of yourself—as you should be! Completing this Harry Potter drawing is definitely fulfilling.

We can’t wait to see your colorful Harry Potter drawing! 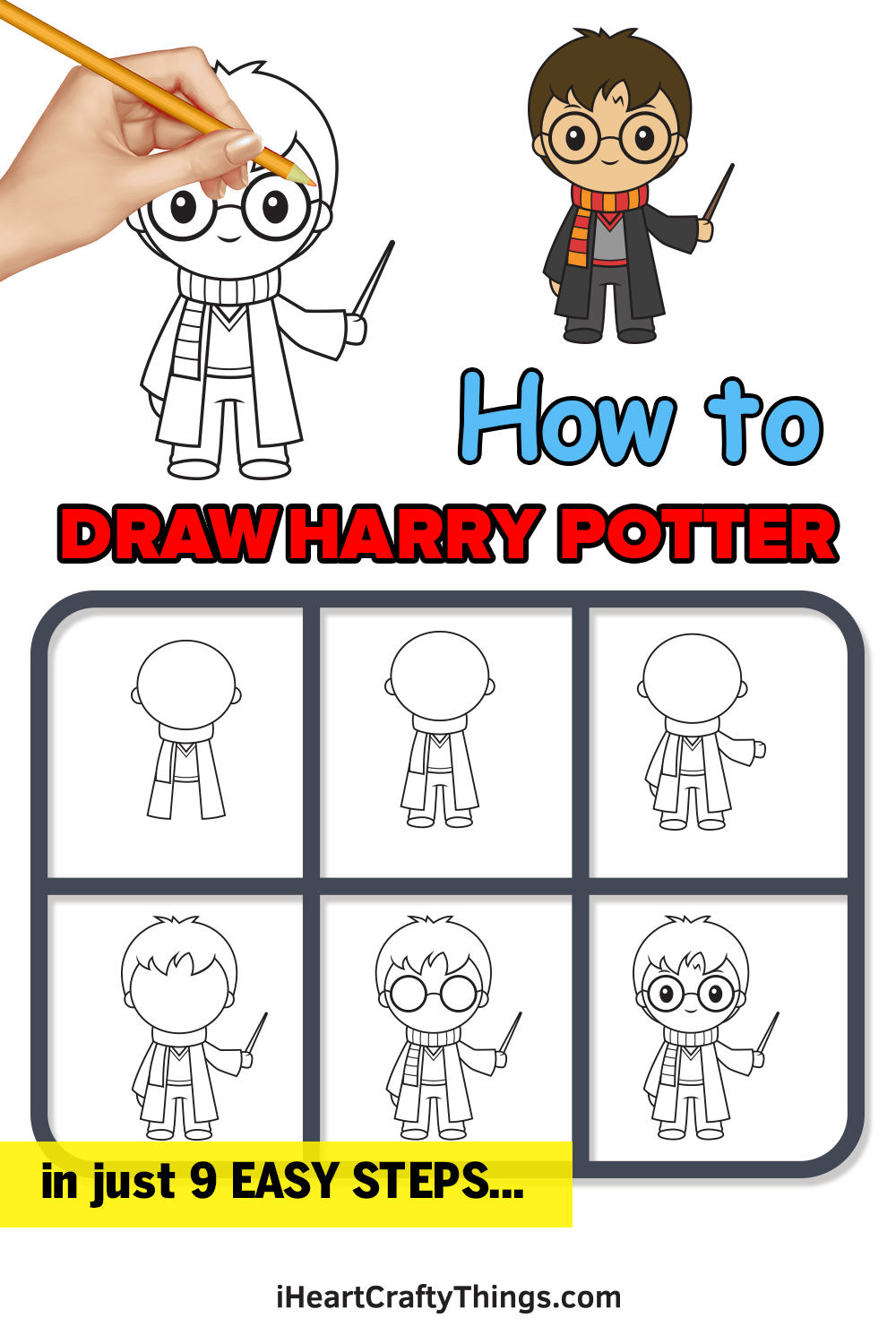